The Performance Artist Who Went To Impossible Extremes 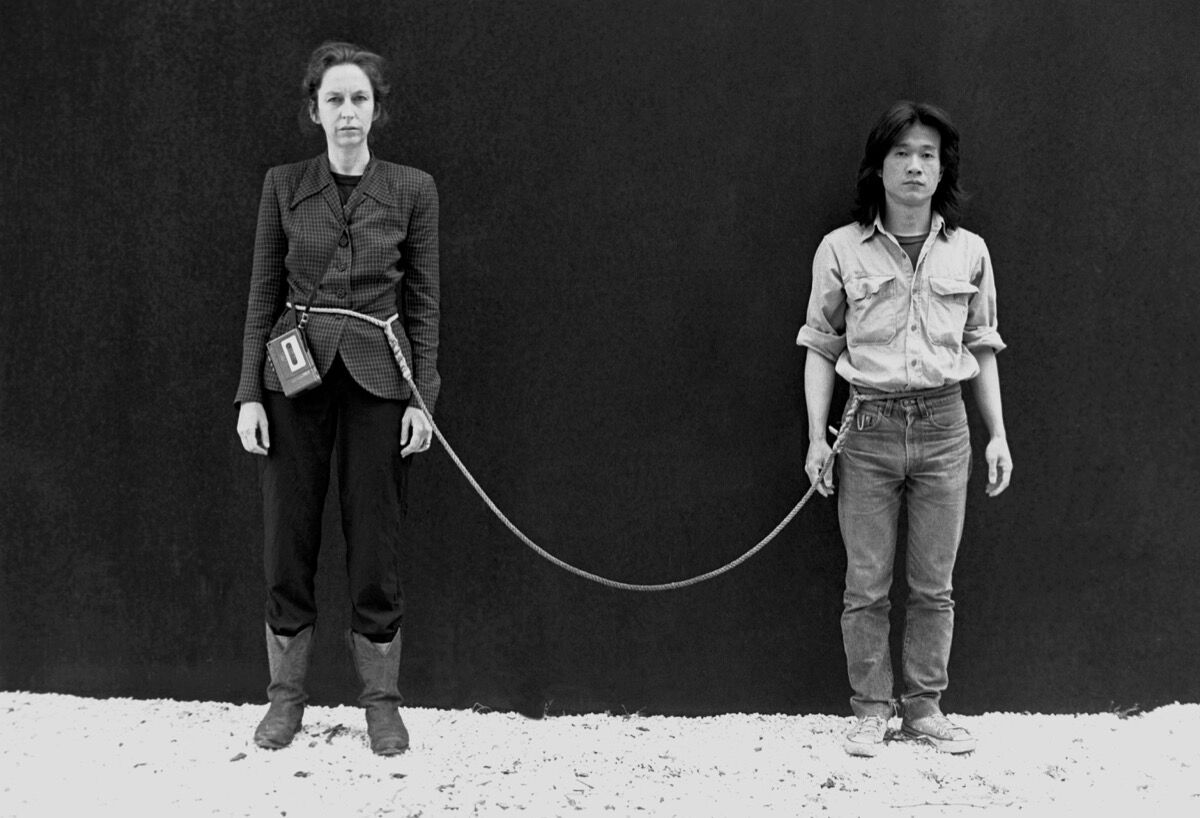 Marina Abramović
has referred to the performance artist
Tehching Hsieh
as “the master.” And over the course of his three-decade-long career, Hsieh has isolated himself in a barren, caged room, making no contact with the outside world; lived and slept on the streets of New York, avoiding any form of shelter; and tied himself to fellow artist Linda Montano with a rope—each piece lasting for an entire year. (“Life is a life sentence; life is passing time, life is free thinking,” he has said, suggesting the stoic philosophy that guided these radical, time-based performances and others of the late 1970s through the ’90s.)
Yet, despite having undergone these extraordinary performative endurance tests, Hsieh is often excluded from major texts on conceptual and performance art and, strangely, remained relatively unknown until he quit making art altogether. The artist has since participated in prominent museum shows and published a major academic tome—as well as representing his home country of Taiwan at the Venice Biennale this past summer, in his most comprehensive retrospective to date.
Who is this enigmatic artist? What drove him to tie himself to a woman for a year? And why did it take so long for the art world to notice?

Towards the “art center of the world”

Born in 1950, Hsieh was the eldest of 15 children and grew up in a small town in southern Taiwan. Though he avidly read Nietzsche, Kafka, and Dostoevsky, he was a disengaged student and, at age 17, dropped out of school to devote himself to art. Originally experimenting with painting, he quit the practice after completing his compulsory three-year military service and started to perform what he called “actions,” instead—what we might think of as performance art, though Hsieh had had little exposure to the medium at the time. 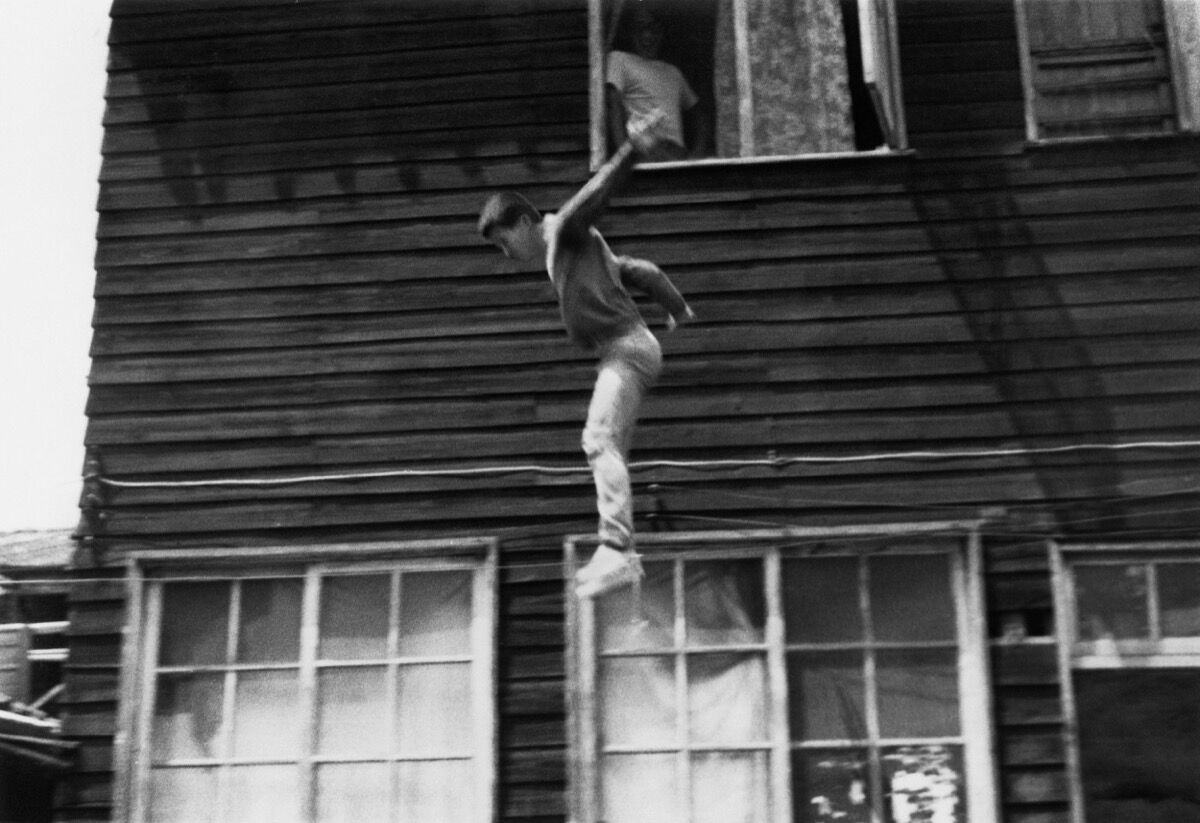 For his first “action,” the now legendary Jump Piece (1973), he flung himself off an approximately 15-foot-high second-floor window onto concrete, shocking the local community—and breaking both of his ankles. He photographed the piece with his newly purchased Super 8 camera, establishing the practice of documenting his own work, which he would continue meticulously throughout his career.
Though eager to build his artistic practice, Hsieh felt limited by the conservative political atmosphere in Taiwan and, like many artists of the time, looked to New York City as the “art center of the world.” But it was difficult to secure a visa at the time, so in 1974 he took an unconventional route and trained as a sailor to join an oil tanker headed for the U.S.
He jumped ship near a port in Philadelphia and hailed a cab to New York City, where he has lived and worked ever since (including a period of 14 years without a green card, until he was granted amnesty in 1988). Determined to succeed as an artist, Hsieh quickly learned the harsh realities of life as an illegal immigrant and, experiencing culture shock and unable to speak English, supported himself with dishwashing and cleaning work in restaurants. To avoid running into the police, he skipped public transportation altogether, and remained almost unaware of the bustling downtown arts scene of the 1970s and ’80s.
Given the circumstances, it’s no surprise that his work was also suffering. “I was eager to do art but had no ideas to do any work,” he said. “It was frustrating. I had a studio in Tribeca and I walked back and forth doing my thinking every day after work.”
Then, finally, he had a breakthrough idea, one that would form the foundation of his practice. “One day all of a sudden I thought: what else do I look for?” he once recounted. “I don’t need to go out to find art, I am already in my work.”

“To me doing life and doing art is all the same—doing time. The difference is that in art, you have a form,” Hsieh said. And so over the course of the next two decades, he embarked on several durational performances that pushed the limits of performance art—five “One Year Performances,” followed by Thirteen-Year Plan (1986–1999)—before abandoning artmaking altogether.
These works were strictly disciplined and required contracts that were signed, witnessed, and certified by a lawyer. In his first piece, One Year Performance 1978–1979 (Cage Piece), the artist spent a year confined inside a cell-like room, making no contact with the outside world save for a friend who delivered food and clothing and removed his waste, and a small audience that came to witness the performance every three weeks.
During his year in that cell, Hsieh did not speak, read, write, listen to the radio, or watch television. He had a friend take a series of photographs to document the performance; they show him sitting on his cot, staring lifelessly at the ceiling, his hair growing long and disheveled.
With little time to recover, Hsieh followed Cage Piece with One Year Performance 1980–1981 (Time Clock Piece), in which he—again for the entirety of a year—punched an office timecard every hour, essentially depriving himself of any prolonged period of sleep or activity. The work prompted the artist to reflect on the Greek myth of Sisyphus, who rolled a massive boulder up a mountain only to watch it roll back down again and again, for eternity. “It was like being in limbo, just waiting for the next punch,” he recalled. 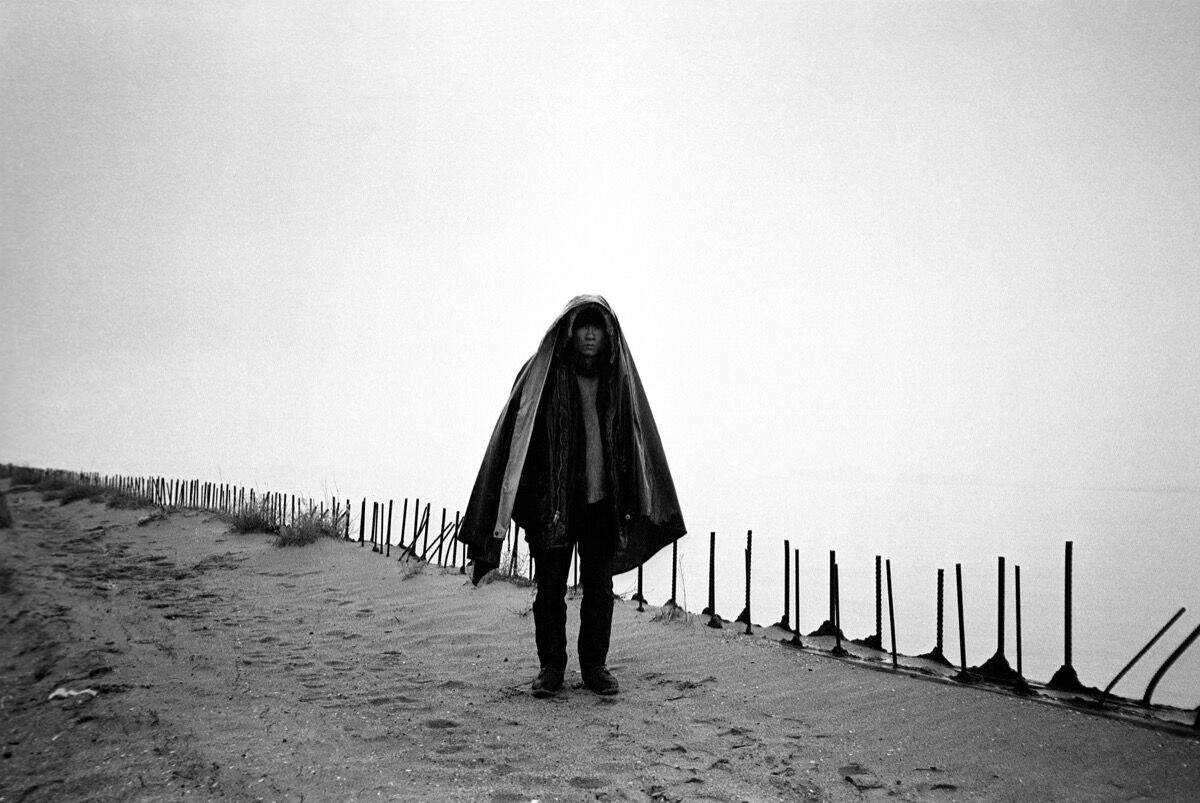 Advertisement
Though Hsieh has stressed in interviews that he is not a political artist, the work suggests a metaphor for the monotony of industrial labor, or the hard slog of a working class life. The next piece he worked on can also be read through the lens of class and inequality. Titled One Year Performance 1981–1982 (Outdoor Piece), the work took him onto the streets of New York, where he lived and slept for a year, including during a record-breakingly cold winter.
Hsieh vowed never to enter a building or any form of shelter during the performance. His single digression was when he was arrested for vagrancy and had to appear in court.
Though Hsieh recounts feeling depressed after returning to the real world following Outdoor Piece, he persisted on to his next challenge, his penultimate year-long performance. In Art / Life: One Year Performance 1983–1984 (Rope Piece), he and artist Linda Montano tied each other together with a rope and signed the following manifesto: “We will stay together for one year and never be alone. We will be in the same room at the same time, when we are inside. We will be tied together at waist with an eight-foot rope. We will never touch each other during the year.” Hsieh even commuted with Montano daily and accompanied her to her teaching job.
“We had a lot of fights and I don’t feel that is negative,” Hsieh recalled in an 1984 interview. “Anybody who was tied this way, even if they were a nice couple, I’m sure they would fight, too. This piece is about being like an animal, naked. We cannot hide our negative sides. We cannot be shy. It’s more than just honesty—we show our weakness.”
After his two final performances—one of which involved the artist creating art privately but declaring he would not show it to the public—Hsieh vowed never to make art again. “I don’t have other things to say,” he explained in one interview. With the same matter-of-fact rigor he applied to his performances, he closed a chapter of his “life sentence.”

Why was he overlooked?

Hsieh began to get noticed in the New York art scene with his last few “One Year Performances” and, over the decades, developed a following of admirers more by word-of-mouth than by institutional recognition. His real breakthrough came in 2009, a decade after he quit artmaking. The original cage and interior objects from Cage Piece, along with the 365 photographs documenting the performance, were installed at the Museum of Modern Art, and Time Clock Piece was included in a group show at New York’s Guggenheim.
Hsieh also collaborated with curator Adrian Heathfield to publish a major monograph, Out of Now: The Lifeworks of Tehching Hsieh (2009). “Because of this book I can die tomorrow,” he said at the time. And this past summer, Hsieh brought his extensive archive of documents, contracts, and photographs from his performances to Venice, in a critically acclaimed presentation curated by Heathfield.
What took so long for his groundbreaking practice to be recognized? The reason lies partly in the fact that he worked outside of traditional art world institutions, refrained from with New York’s avant-garde circles, and stopped making art entirely in 1999.
Hsieh, who is always exceedingly humble in interviews, also once acknowledged that he lacked “the tools of language,” and that this perhaps slowed his rise. To this day, he is a reluctant participant in the contemporary art world, and self-conscious about his outsider status.
“It’s like homework to me, because I still have to take care of my survival,” he said. “Of course, it is good for me to see these things, but I feel uncomfortable about my education. I’m missing what I call ‘the adaptor.’ I’m like a caveman. I need an ‘adaptor’ to make a connection with the civilization.”
Though the artist himself is hesitant to admit it, Heathfield and other curators have shifted the blame to the Eurocentric nature of the art world: “Everyone knew Hsieh’s work was very important but no one was writing about it. It was just one photo here or there,” he recently told The Guardian. “It’s because it was hard work to understand the cultural other—and people were not prepared to do that work.” 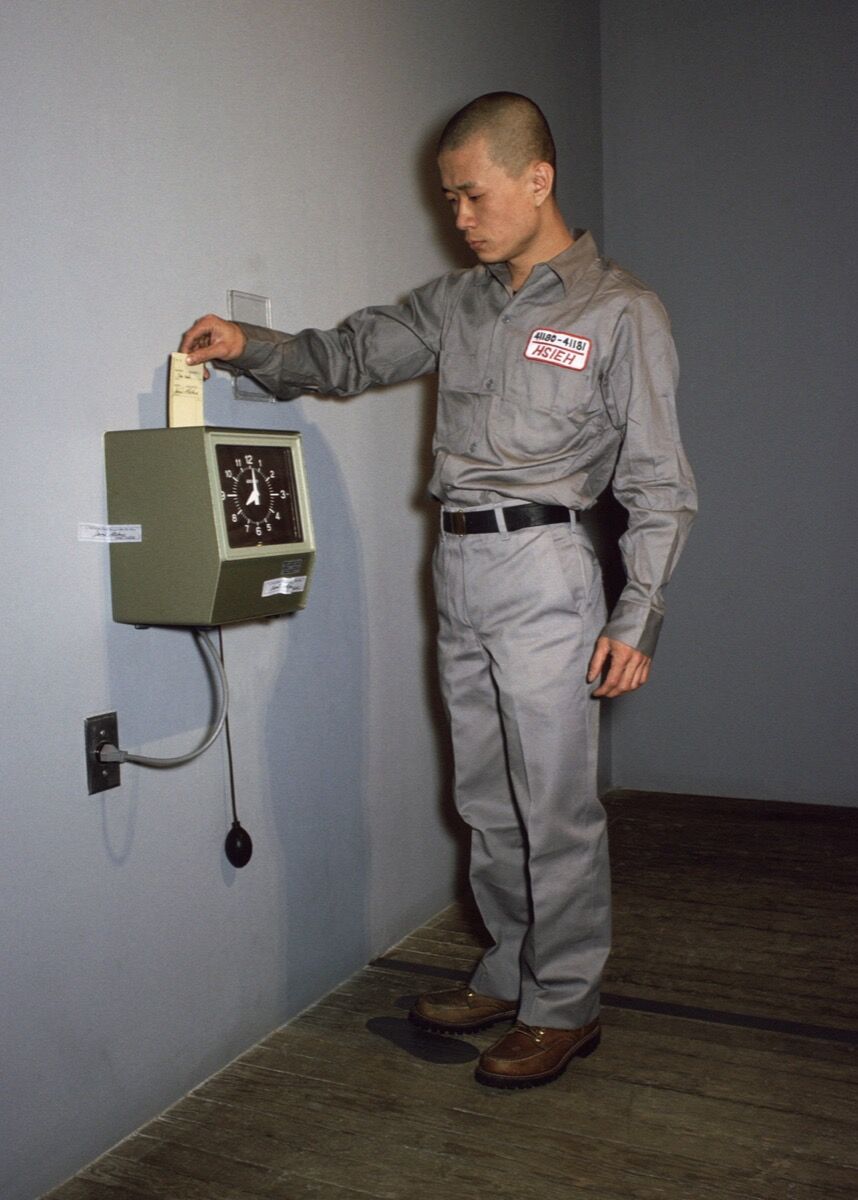 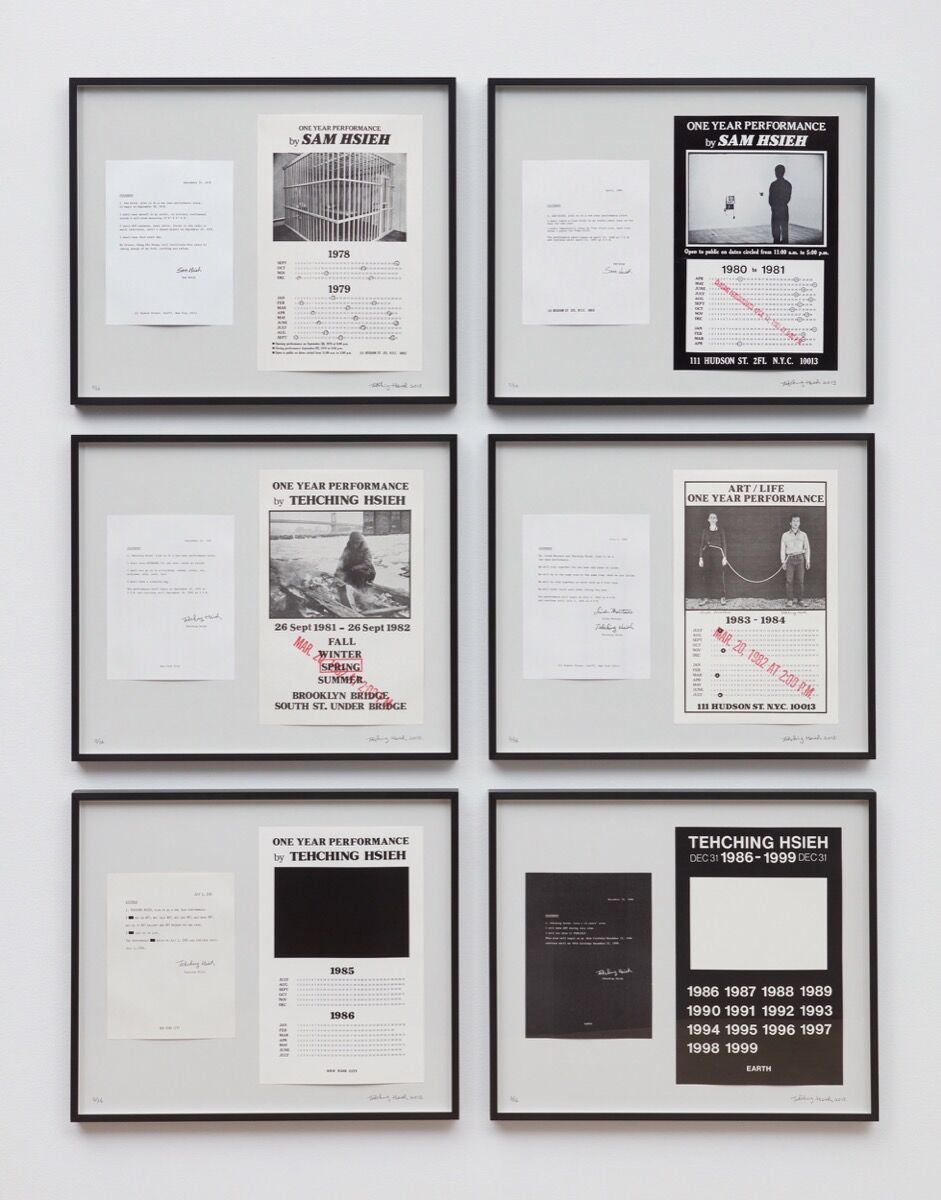 Some skeptics might wonder why the artist would ever choose to subject himself to such physical and mental extremes, and how “wasting time” could even qualify as art. Hsieh has stressed that his works are not about pain or suffering, but more broadly about the nature of human existence itself. “We can talk about suffering but then we have to talk about freedom. Or we can talk about freedom, but we also have to talk about discipline. There are many things interwoven.”
At the same time, he is careful not to assign a specific meaning to his work. “Again, for me, it’s about passing time not how to pass time,” he has explained. “With the work, I try to leave communications open to all responses.”
By creating art that essentially gave form to everyday life, and confining his performances to a standard unit of time, Hsieh’s work asks us to meditate on what it means to be human—to pass time and measure time, to set rules and boundaries, to be free or constrained, active or passive.
In an interview with Hsieh, Abramović described his works as “tools…to accept life as it is.” She expanded: “That’s why these works will never die, because you are dealing with the nature of life itself.”
Indeed, the questions raised by Hsieh’s work are even more relevant in today’s increasingly digital, hyper-connected world, where technology simultaneously frees up our time and distracts us to no end. Are we wasting our time glued to our computer screens? Hsieh’s work asks us to reflect on how we spend the hours, days, and years of our lives.
It has been suggested that performance art is “the medium of our time,” offering an experience rooted uniquely in the now. Hsieh’s oeuvre—which lives on only in contracts and photographs—takes us one step further, asking us not to concentrate only on the present but rather to consider the nature of time itself, in order to better understand ourselves and our places in the world.
Demie Kim
Related Stories

8 Artists Who Went to Extreme Measures for Their Art 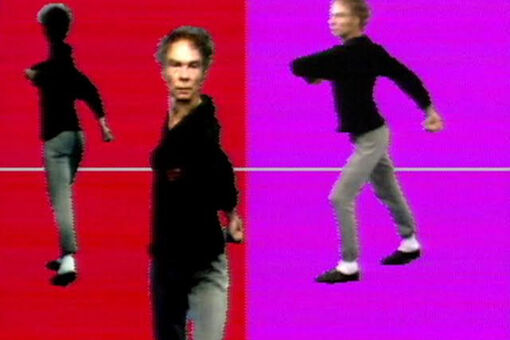 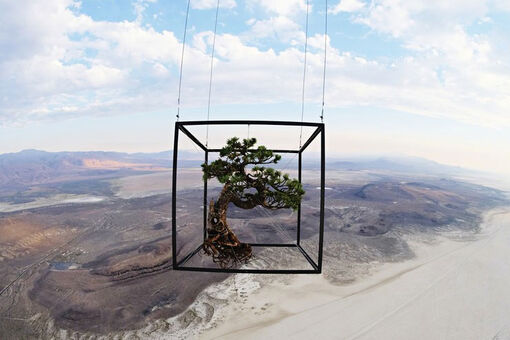 8 Artists Who Went to Extreme Measures for Their Art
Artsy Editors
Apr 11, 2016