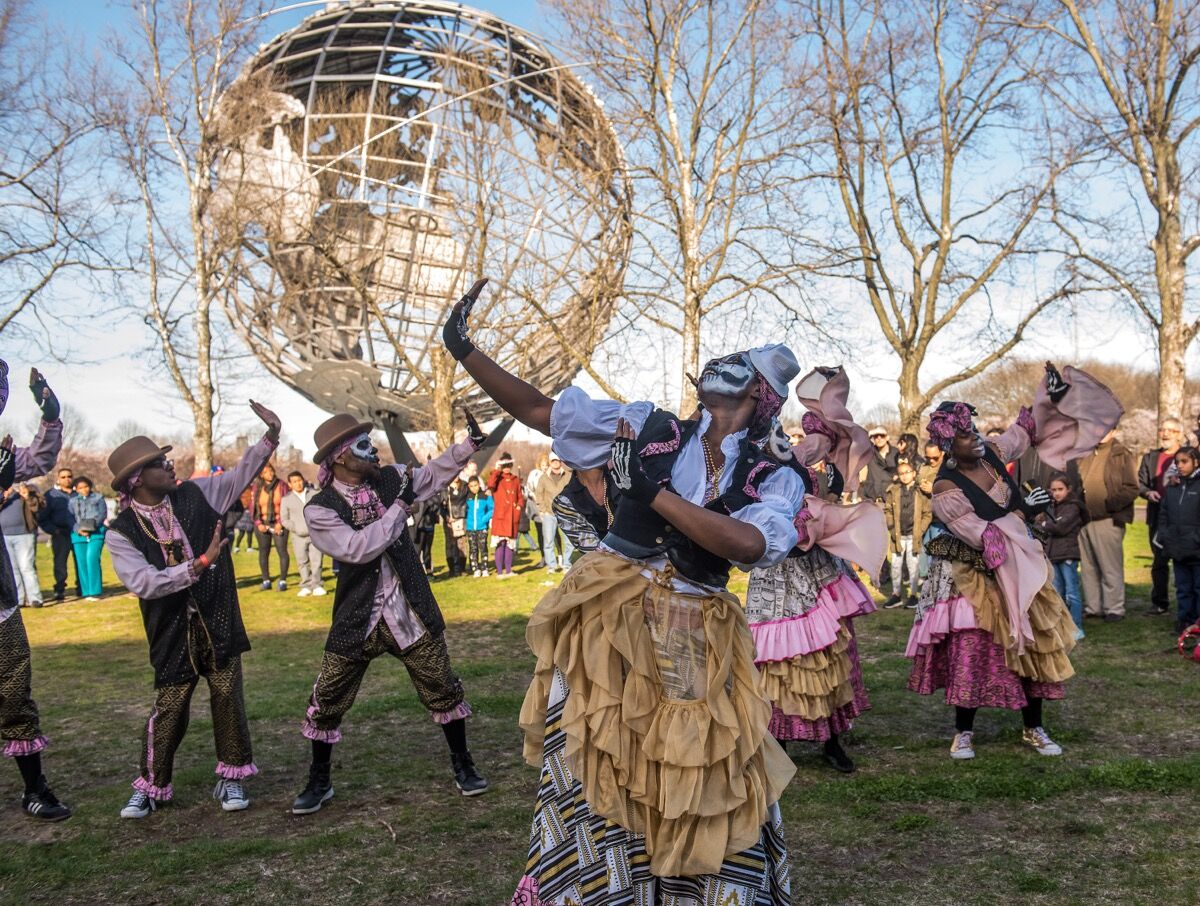 The past week has been a busy one for the art world. In Athens, Adam Szymczyk opened the first half of his documenta 14, the first edition in which such a large portion of the quinquennial show takes place outside of Kassel, Germany. In Venice, collectors ogled and Instagrammed their way through
Damien Hirst
’s splash back into the center of art-world attention—a massive, for-sale museum show spanning François Pinault’s Palazzo Grassi and Punta della Dogana, where a single, barnacled sculpture can reportedly run you north of $5 million. A performance in Queens, however, drew a very different audience—the parents, friends, and children of some 350 members of the community that took the stage—and packed a punch to the gut, rather than the wallet.
Protest Forms: Memory and Celebration: Part II (2017) is the work of Berlin and London-based, Italian artist
Marinella Senatore
and couples with her first American museum show “Piazza Universale / Social Stages” at the Queens Museum. It lasted for a little over two hours on Sunday afternoon and involved members of Black Lives Matter NYC, Middle Eastern folk music ensemble the Brooklyn Nomads, Indigenous Aztec dance group Danza Azteca Chichimeca, world champion jumping team FloydLittle Double Dutch, the Lesbian & Gay Big Apple Corps Symphonic Band, members of the Martha Graham School, rapper Smth, and many, many others.
Participants were recruited to take part via the Queens Museum’s numerous community outreach programs, via referrals, and via Senatore’s own network. Each group was given a few minutes (which many, in their excitement, took the liberty to extend) to dance, drum, speak about their community’s current struggles as well as their histories of protest, sing, and then recede back into the audience as the next leaders of this great, circuitous, stop-and-go processional moved into the fore. 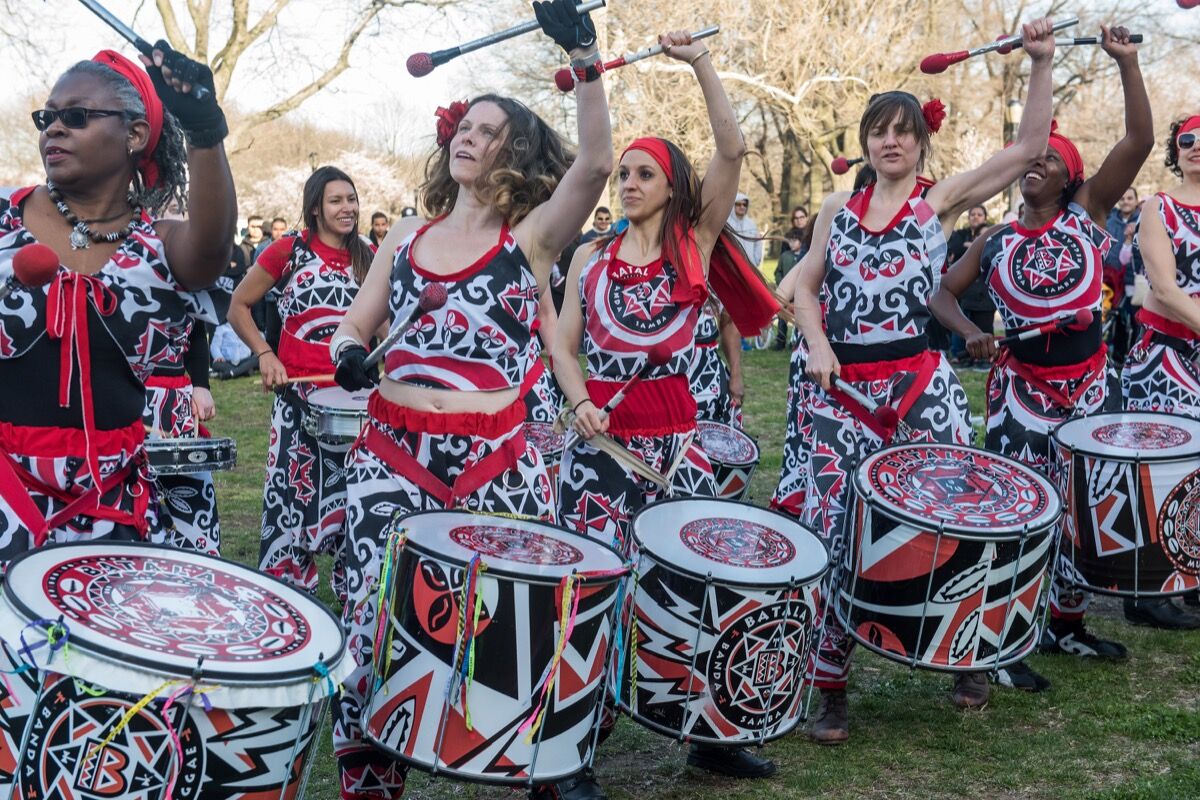 The performance is a follow-up to one Senatore staged for the Quadriennale di Roma last year, curated by Matteo Lucchetti, who also organized the Queens Museum show. It continues a core tenet of her practice, which takes a given community as its inspiration. In the past, that’s seen her create Rosas (2012), a roaming, multifaceted opera using 20,000 majority-amateur performers hailing from Spain, Germany, and the U.K.; and Speak Easy, a 2009 initiative that brought together over a thousand students and retirees from the periphery of Madrid to collaboratively create a film.
I watched a processional of Rosas in 2012, down Berlin’s Auguststraße to her former gallery Peres Projects’s former Mitte location (she’s now represented in the city by KOW and by Laveronica in Modica), and have seen films and other documentation for a number of Senatore’s past initiatives. I’ve enjoyed the work and thought her artistic approach to be genuinely interesting—if at times more so for the participants than the viewer. But on Sunday, artist, artistic approach, location, and present moment combined to create not only what I’d argue is Senatore’s magnum opus to date but also the most impactful work of art that went on view in the past week.
Senatore spent nearly three months working with members of the community to create Protest Forms. She choreographed the order and placement (though not the content) of each group’s performance both inside and outside of the museum. She also initiated an open call to Queens residents, asking them to submit local protest songs and the sounds that remind them of their neighborhood, which she then gave to Italian composer Emiliano Branda to create an original score titled Queens Anthem. 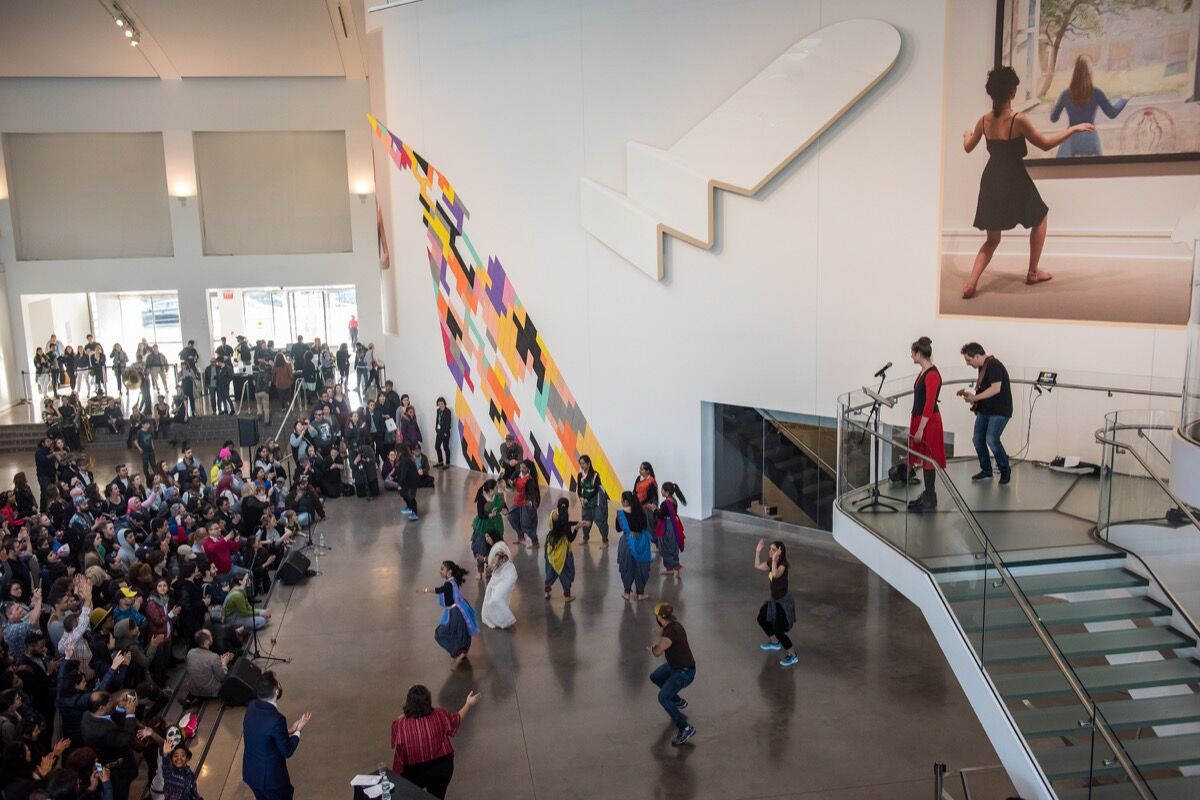 Advertisement
In the span of a month that has seen the art world embroiled in fierce debate about
Dana Schutz
’s painting of murdered African-American teenager Emmett Till, Open Casket (2016), and the nation relatively more united in condemnation of Pepsi’s appropriation of protest and racial stereotyping in its now-infamous Kendall Jenner-starring ad, “Live for Now Moments Anthem,” Senatore’s work stands out for at least two reasons.
First, as Antwaun Sargent wrote for Artsy, the controversy around Schutz’s work “is, at its core, about the failure of the art world to truly represent black humanity, despite its recent insistence on “diversity,” and Schutz’s own attempt to empathize with the struggles of black Americans through her empathy with Till’s mother, Mamie Till, as a mother herself. Senatore is a white artist, and the Queens Museum, despite being located in the most diverse neighborhood in the world and having one of the more diverse staffs in New York City, is a white-run institution. But the artist’s and the museum’s role in Protest Forms was to provide a space, a time slot, and to move the audience into position to watch—in essence, to present whatever those who chose to participate wanted to put forward as their experience.
When Mahogany Browne, Shanelle Gabriel, Jive Poetic, and The Peace Poets each stood on the corners of the rectangular recess that makes up the museum’s Skylight Gallery just off its atrium and Black Creative Brilliance (BCB), Black Lives Matter NYC’s Arts & Culture Crew, at its center, there was little direct attempt on Senatore’s part to contextualize or represent their lived experience. Rather, she listened—and subsequently provided a venue for others to listen too. 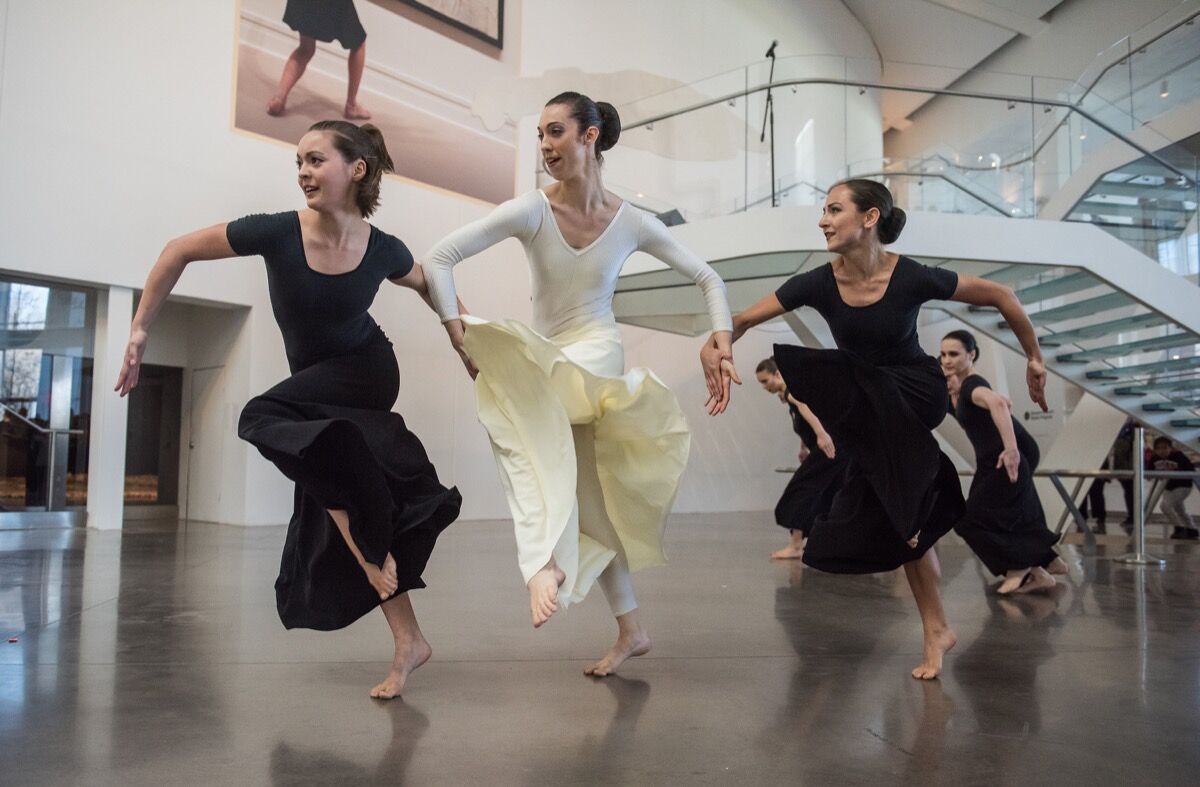 It was one of two instances in the course of the performance in which music and spoken word poetry paired with actual physical resistance. In this case, words about police brutality, racial discrimination, and gentrification were rapped and recited into microphones and megaphones over the shuffling of feet and clashing of shoulders of young men from the Queens chapter of the youth wrestling program Beat the Streets.
In the other, two girls from the Women’s Initiative for Self-Empowerment—a self-defense, social entrepreneurship and leadership development movement for young Muslim women—practiced moves used to ward off a rising tide of racially motivated attacks that often begin with hijabs being snatched from atop Muslim women’s heads. They performed in front of the Unisphere globe created for the 1964 world’s fair, while folk musician Joshua Garcia played Woody Guthrie’s “This Land is Your Land” and Pete Seeger’s “Which Side Are You On?” in the background.
In both cases, the combination was Senatore’s suggestion initially but one immediately taken on by both sets of participants. 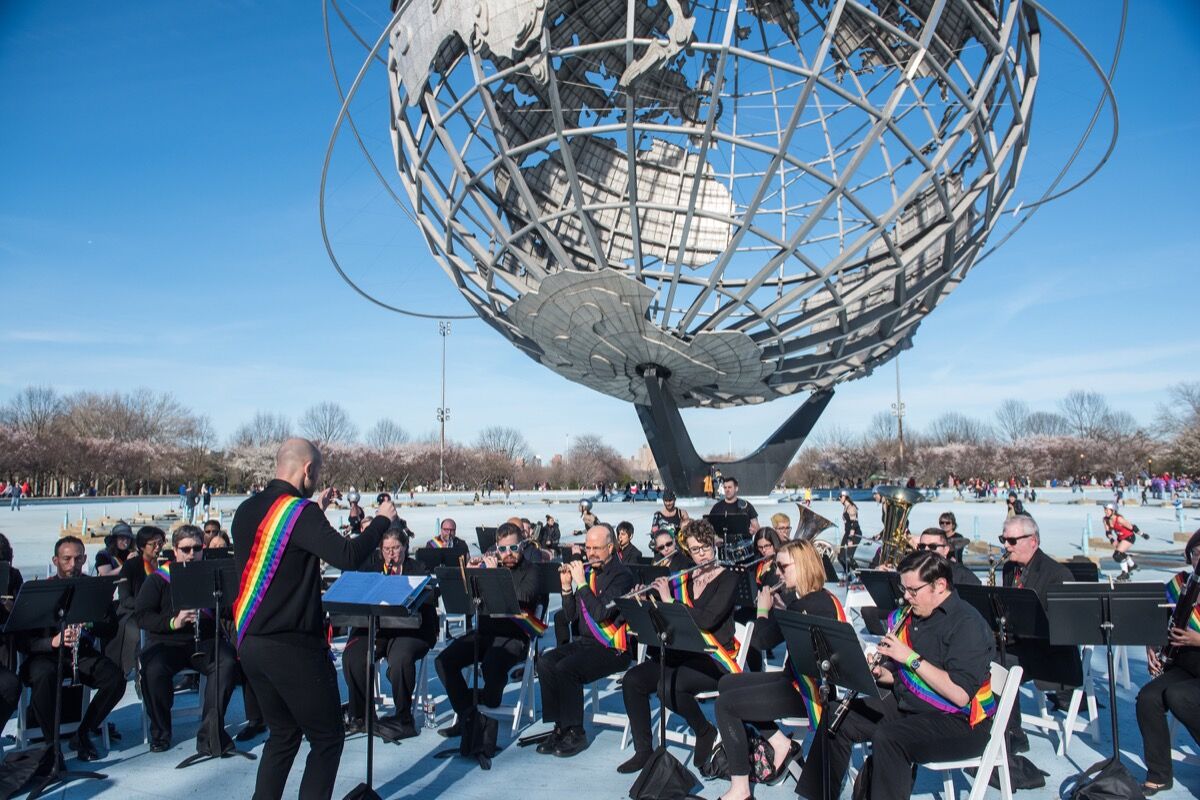 Second, as Senatore’s performance’s title suggests, it is not simply a recording of past and current struggles and means of resistance but also a celebration of the many-layered community in which it takes place. Particularly exuberant were the parents of youth from the mariachi school Academia De Mariachi Nuevo Amanecer, who played under
Anna K.E.
’s installation in the Queens Museum atrium—one of three other exhibitions that opened on Sunday afternoon. But throughout Protest Forms’s two-plus hours, whether in the tap dance of Marshall Davis Jr., the step dance of the Lady Dragons from Brooklyn Technical High School, the bullerengue music of Bulla en el Barrio, the dance of the Bangladesh Institute of Performing Arts, or the singing of Jamaican vocalist Abby Dobson, a sense of creativity-induced unity was palpable.
It’s the kind of unity Pepsi ad director Bjorn Charpentier misguidedly tried to fabricate and package to sell cola. But it’s also a vision of America—one in which we celebrate our differences and listen to the struggles of our neighbors—that many of us hoped would be currently being furthered by a very different executive branch. Mounting that vision in the Queens Museum building, which initially served as the home of the General Assembly of the United Nations, and under the Unisphere globe isn’t just a brilliant example of the power of art, and particularly social practice, to tell our collective story. It is also an important reminder that if we listen and we collaborate, that vision is not at all lost.
Alexander Forbes is Artsy’s Consumer Marketplace Strategist. He was previously the Executive Editor of Artsy Editorial.
Related Stories