Personality and Porcelain: The Unique Vision of the Late Ceramist Viola Frey 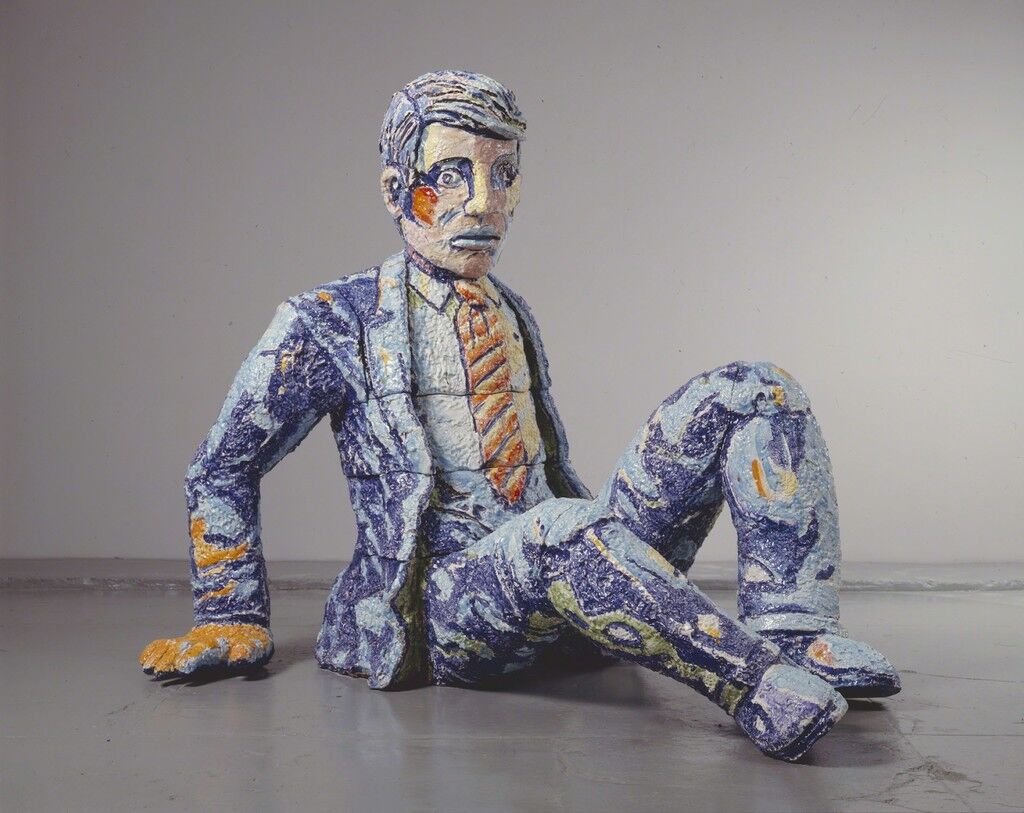 Falling Man In Suit, 1991
Nancy Hoffman Gallery
“A Personal Iconography ” the fourth exhibition dedicated to Frey since her death in 2004, includes work in a variety of mediums, all of which capture her unique figurative vision and document her vernacular life in her home of
California
. Her works often feature men and women at work—including the artist in the studio—and demonstrate a keen sense for color, and a loose, painterly aesthetic. Her synthesis of art and craft was deemed peculiar during much of her early career, but has become more and more desirable in the wake of
Pop Art
and as women and traditionally feminized art forms enter the art world in greater and greater numbers. Describing an early experience showing her work, Frey once said, “I did a series of pieces that were about the worker…[T]his was in an exhibit down in Los Angeles and then some women came in and they looked at the work, and they said, ‘Boy, this is us.’” 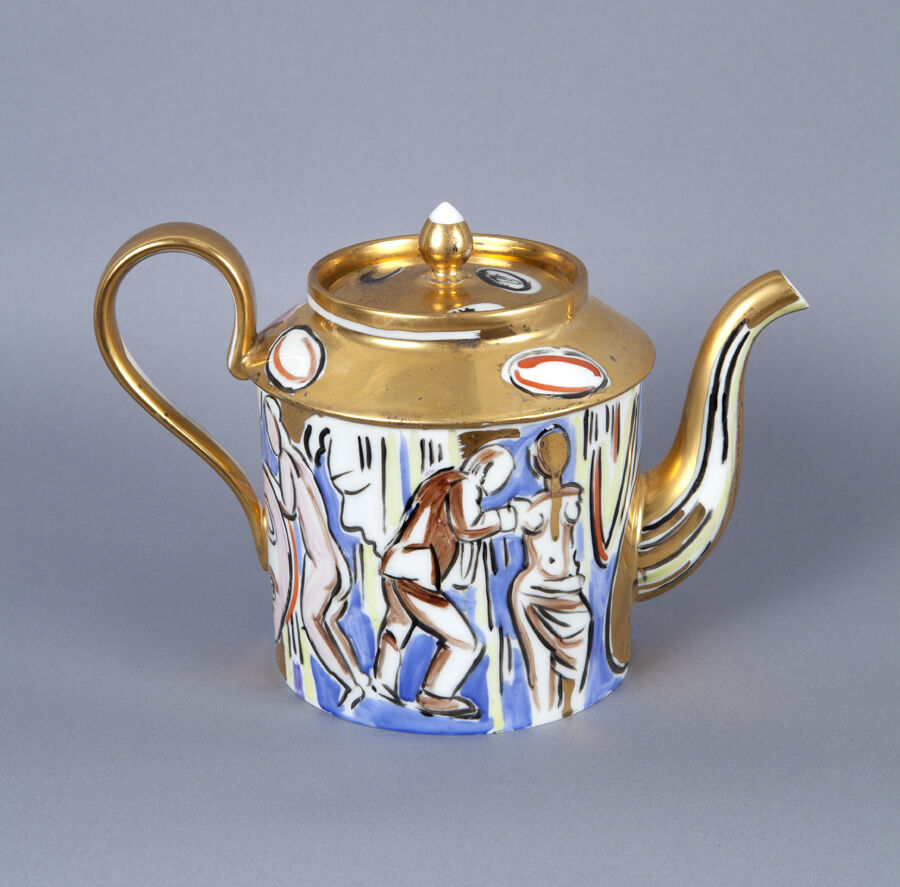 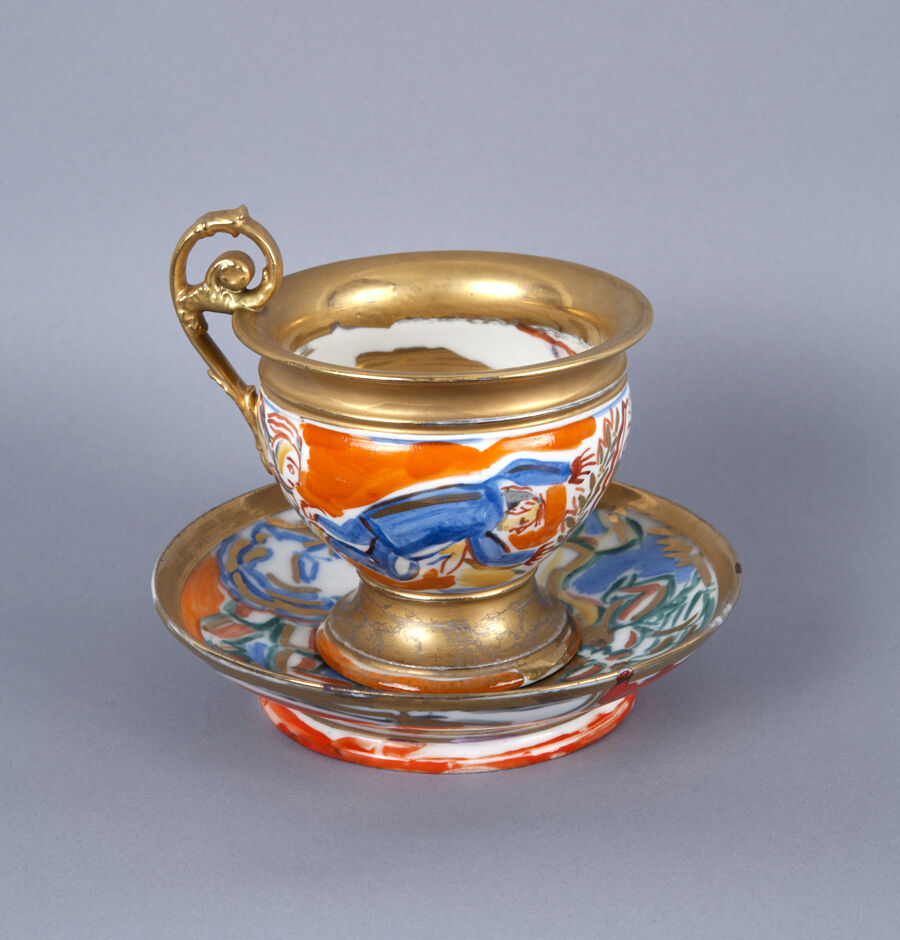 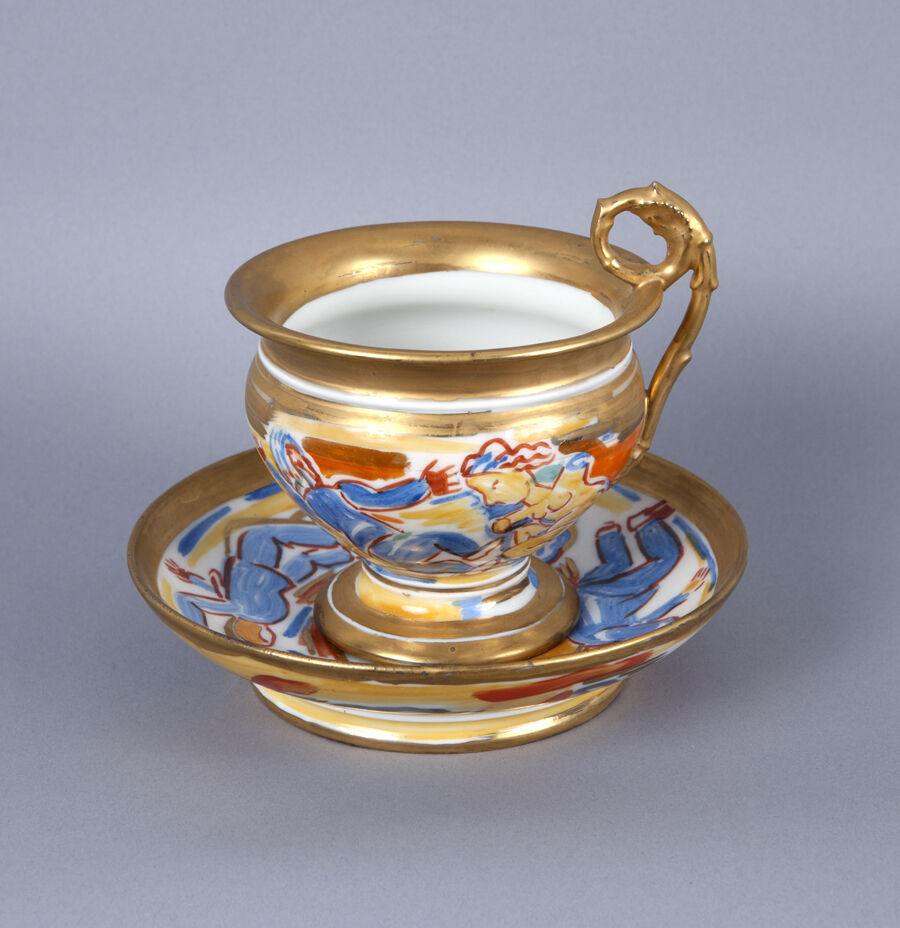 Studio View: Three Blue Suits and Nude , 1986
Nancy Hoffman Gallery
Such images recur in two oil paintings on canvas: Studio View: Seated Woman, Vase on Lap (1986) and Studio View: Three Blue Suits and Nude (1986). Both can be read as allegories about the working artist, as represented by mannequin forms and men in blue suits toiling in a
landscape
filled with architectural fragments and pottery. Like
Red Grooms
, who also worked in both sculpture and two-dimensional imagery, Frey depicts the lives and work of ordinary people in kaleidoscopic and painterly imagery. 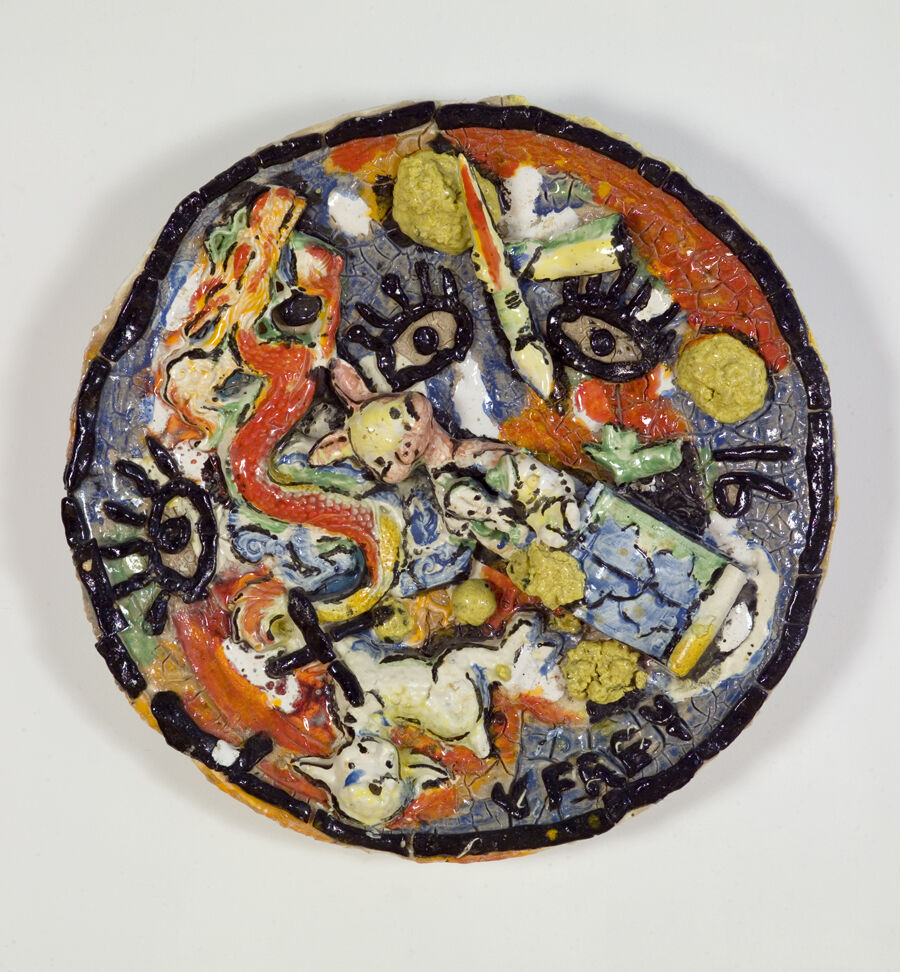 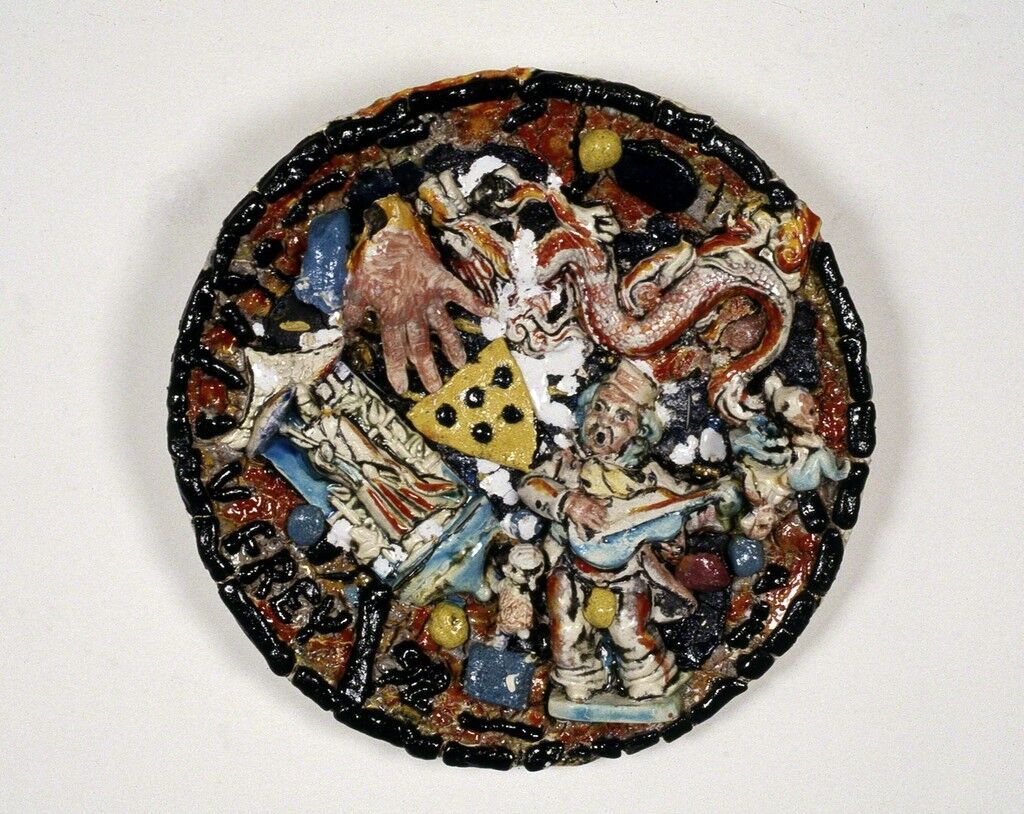 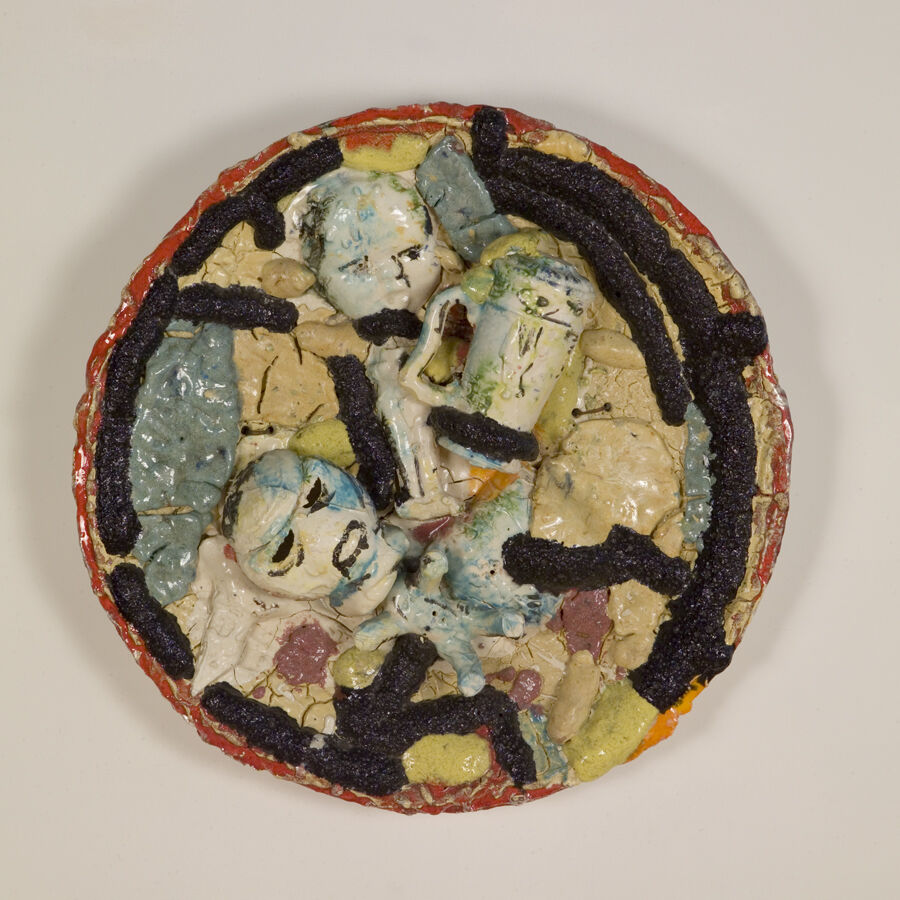 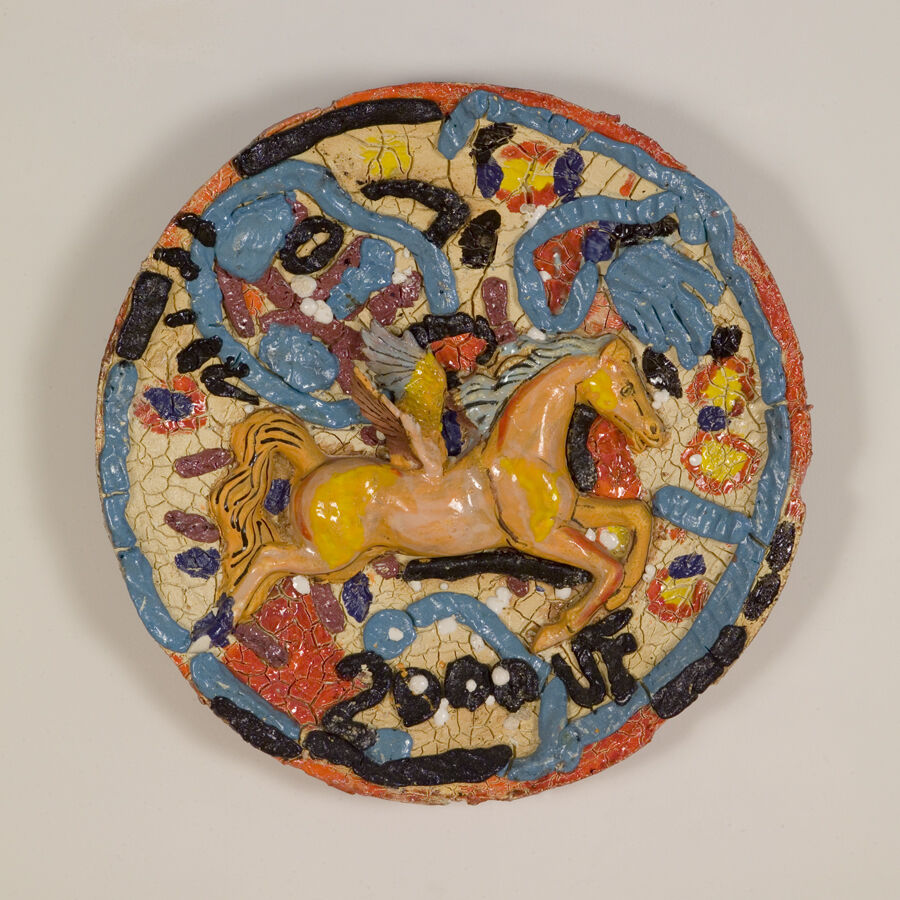 Pegasus, 2000
Nancy Hoffman Gallery
Some of the most exciting pieces on view are Frey’s plate-like
tondos
. Untitled (1991) and Untitled Plate #16 (1992) are collages of iconic imagery and figures, or even just body parts. In the latter, a hand, a musician, a snake, and roiling, glazed fragments of color dance across the surface. Without corners, the all-over composition keeps the viewer’s eyes endlessly moving. This kind of restless energy is common in Frey’s work, which is celebratory and enthusiastic, full of life and its labors.
—Stephen Dillon
“Viola Frey: A Personal Iconography” is on view at Nancy Hoffman Gallery, New York, May 7 – Jun. 27, 2015.
Discover more artists at Nancy Hoffman Gallery.
All images © 2015 Artists' Legacy Foundation / Licensed by VAGA, New York, NY
Related Stories

The Imperfect but Invaluable Experience of Virtual Figure-Drawing Classes

This Artwork Changed My Life: Pieter Bruegel the Elder’s “The Harvesters”
Advertisement
More from Artsy Editorial This Artwork Changed My Life: Pieter Bruegel the Elder’s “The Harvesters”
Olivia Giovetti
May 26, 2020