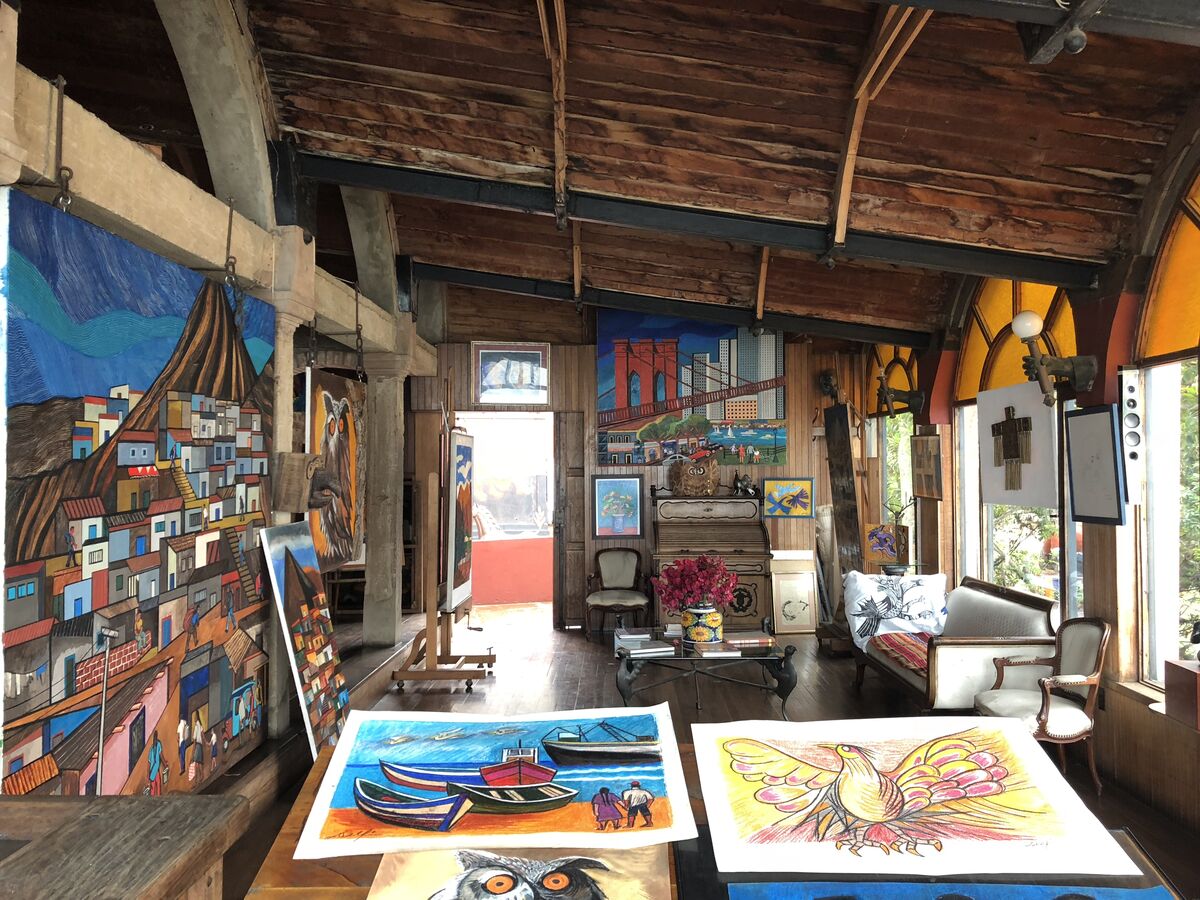 The weather in Lima, Peru, is reminiscent of San Francisco: often overcast with a damp chill in the air. There, cliffs and beaches overlook the steely Pacific Ocean, where paragliders flit over whitecaps. And perched on one cliff, high above the yachts moored at the marina and an enormous statue of Jesus that lights up at night, sits the hotel Second Home Peru. The former residence of Peruvian national treasure
Victor Delfín
, it is an artist studio, bed and breakfast, and contemporary art museum, all in one.
Situated at the quiet end of a side street in the bohemian Barranco district, known for its leafy cafés and street murals, Second Home Peru is housed in a walled-in, Tudor-style mansion. (You’re likely to find curious tourists out front, trying to get a glimpse of the enchanting property.) Lucky guests who pass through its gates enter a strange and wonderful world, marked by a plethora of artworks by Delfín. The 90-year-old artist has developed an international presence through his work; he’s collected by museums around the world, and his public sculptures are located in Quito, Miami, New York, and Prague. His most famous piece, however, a massive sculpture of lovers kissing called El Beso (1993), is located in Lima, in the nearby Parque del Amor.
Decades before creating the piece, Delfín bought the mansion with the earnings from a successful 1978 show at the Bayard Gallery in New York. Over time, he expanded the three-story building into a multi-level art complex. Advertisement
From the front door, one encounters an entry hall, set with large, Versailles-style mirrors. It opens into a coffered-ceiling dining room on one side of the first floor, and a lounge glittering with stained glass, curio cabinets of ancient pottery, and an inlaid piano on the other. Upstairs, the second floor was once dedicated to family rooms and galleries where Delfín showed art by his friends. Above it all, accessible through a hidden spiral staircase, is a tower studio where Delfín used to work with a view of the ocean.
In the decades that followed, he expanded the property by building into the face of the cliff; he added a new studio, a cave gallery, and a large swimming pool with an enormous fountain shaped like a puma head. Over the years, the house was not just Delfín’s family home and studio, but also a meeting place for Lima’s artists and activists. It wasn’t until 2004, after a period when the house fell into disuse, that Delfín’s daughter, Lillian, decided to turn the family rooms, gallery space, a dark room, and her father’s former studio into guest rooms.
3 Images
View Slideshow 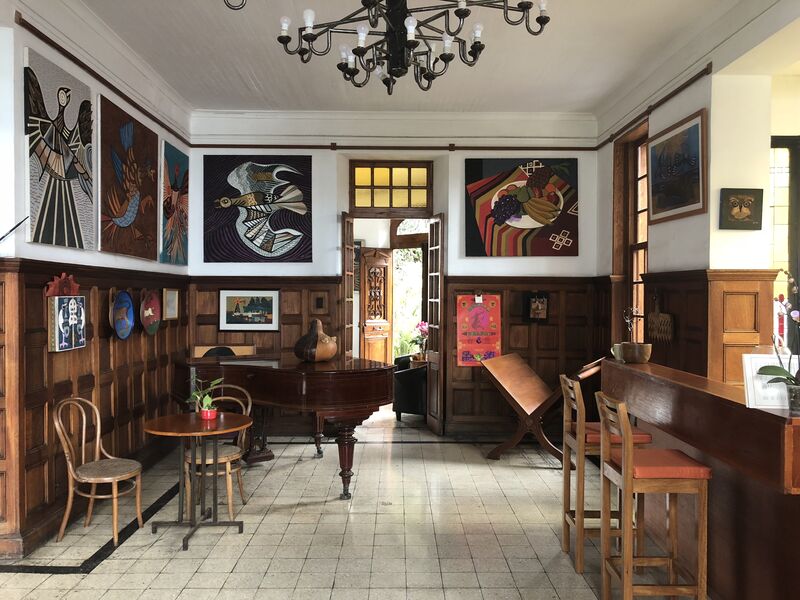 Visitors to Second Home today are greeted by gardens populated by a menagerie of the artist’s signature sculptures: A bull stands guard at the gate; a horse’s mane tosses in the breeze from the bay; the doorframe is held up by a pair of nesting birds. (The hotel’s resident dogs and cats roam freely among the frozen bestiary.)
Around back, a lawn sweeps toward the edge of the cliff, before an uninterrupted ocean view. Most of the guest rooms share the same spectacular panorama. Year-round, the garden is speckled with the purple of dangling bougainvillea flowers.
2 Images
View Slideshow 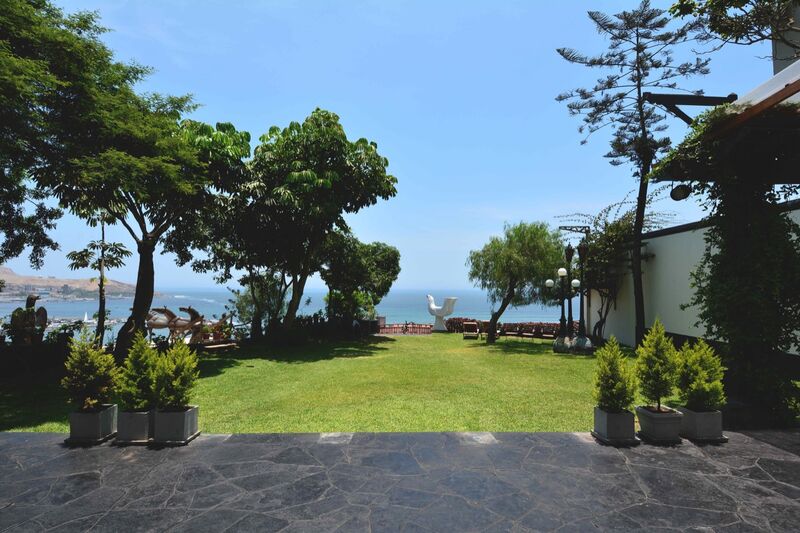 Inside the house, nearly every inch of the towering walls are filled with the artist’s paintings. Bold strokes of saffron, red, and cobalt depict peacocks, pastorals, and the subway stations and bridges of New York City, where Delfín lived for several years. The artist’s touch is elsewhere, too. He designed the enormous wrought-iron wood-burning stove in the lounge, the pieces on a chessboard, and lighting fixtures shaped like hands holding orbs aloft. Hotel experience aside, the house is a tribute to Delfín’s creativity.
Guests can tour Delfín’s current studio, where Pacific light filters through stained glass windows onto paintings the colors of parrot feathers, making the room feel like the inside of a jewelry box. When Delfín was younger, he worked there from 9 a.m. to 5 p.m. each day, pausing for lunch and a nap on the couch.
Lillian Delfín grew up in the house when it was a hub for the other artistsand creatives who inhabited the lively Barranco district. “Every day we met writers, poets, musicians, photographers, artists from different mediums,” she said. “It was like going to a liberal arts school.” Even when there weren’t musicians in the house, Lillian remembers the sounds of jazz, often Louis Armstrong, drifting from the studio where Delfín painted. Following that tradition today, you can usually hear jazz music playing in the lounge. 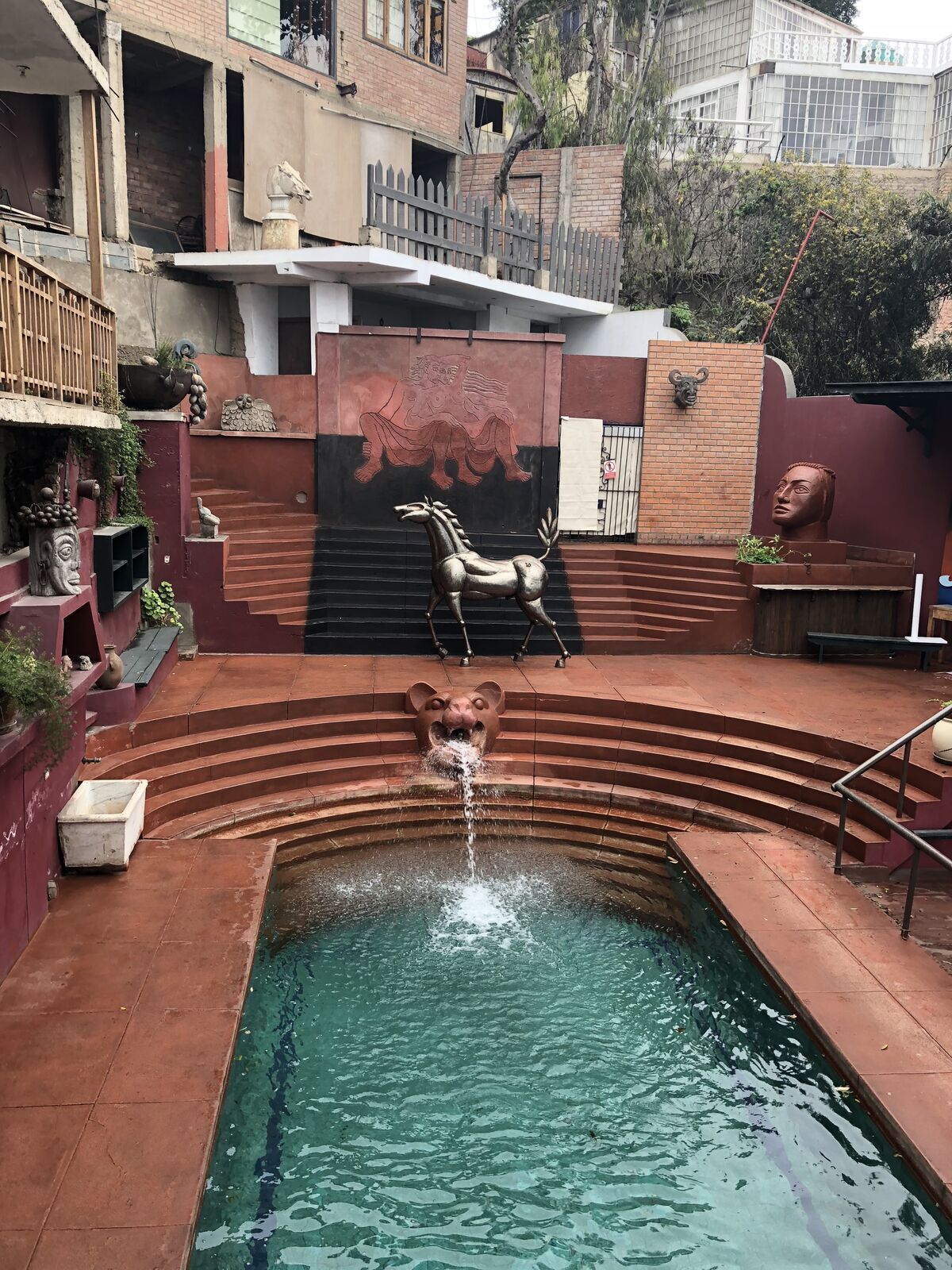 It wasn’t only artists who met at Delfín’s home; it was also a meeting place for activists and political dissidents from “La Resistencia Democrática,” Lillian recalled. In the 1990s, these groups met in opposition to then-president Alberto Fujimori, who was later convicted of and imprisoned for corruption and human rights abuses. Lillian remembers this time as one of vibrant intensity, but also for its chaos, due to the political landscape and street protests. Delfín’s time spent organizing and marching in the streets is as much a part of his legacy to Peru as his art.
Many years later, when an adult Lillian returned in 2004, the lively home she remembered from her childhood was forlorn and empty. Most of the family had moved out, and Delfín spent most of his time in the studio below the cliff’s edge. The feeling of gloom was compounded by new artworks by Delfín that hung on the walls—art that Lillian said “was not for people to see.” They were jarring, monumental woodcuts of military and guerilla atrocities, born of the previous decades when a terrorist group, the Shining Path, haunted the country. Lillian had the works taken out of the main house and placed in an alcove above the swimming pool (where they can still be seen).
Under Lillian’s care, the hotel emerged at first with just two guest rooms, and then grew to offer eight. She plans to build on its success thus far through a more formal museum dedicated to her father’s legacy. For now, there’s no more intimate way to get to know Delfín’s work, inspiration, and creative process than spending a night in his family home.
Emily Ludolph
Related Stories

Deep in the Mexican Jungle, One Man Created a Surrealist Paradise

Inside a Legendary Architect’s Glass Hideaway in a Brazilian Jungle 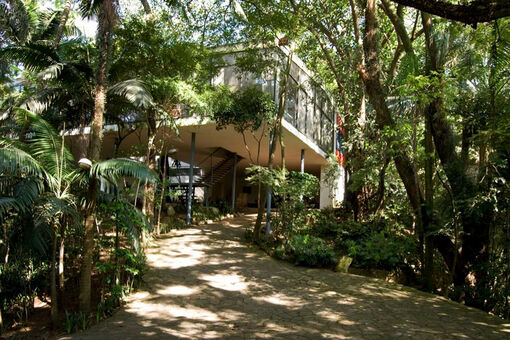 Inside a Legendary Architect’s Glass Hideaway in a Brazilian Jungle
Casey Lesser
May 31, 2017 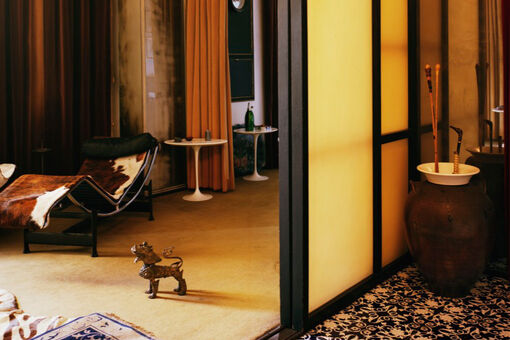