The Story Behind the Photograph That Made Ansel Adams Famous 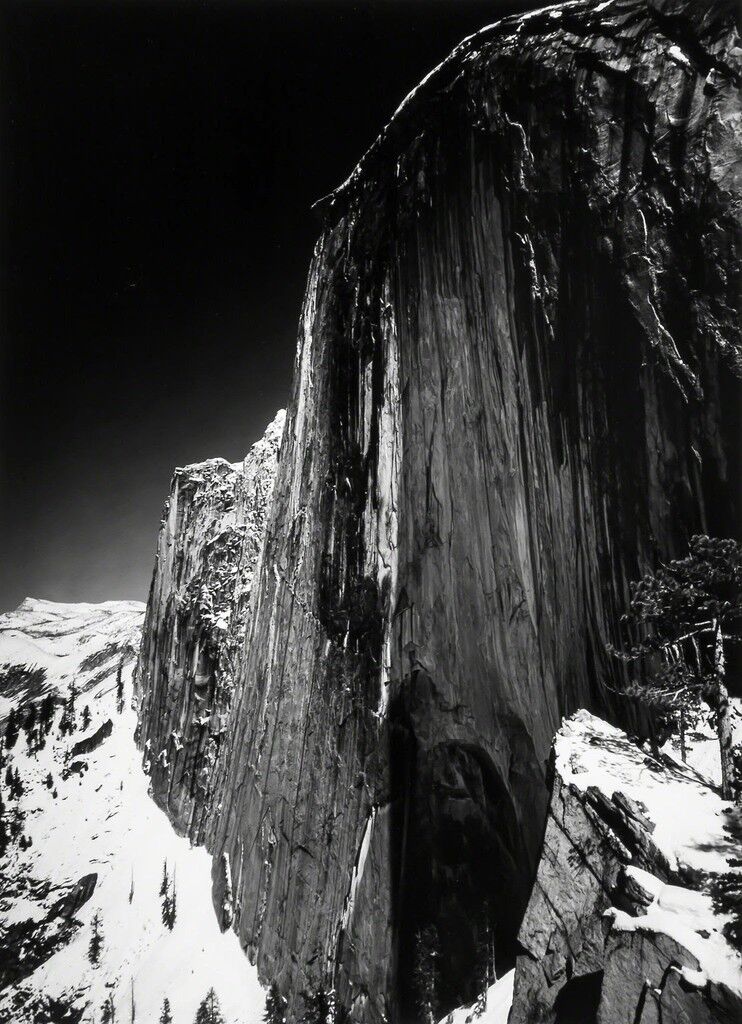 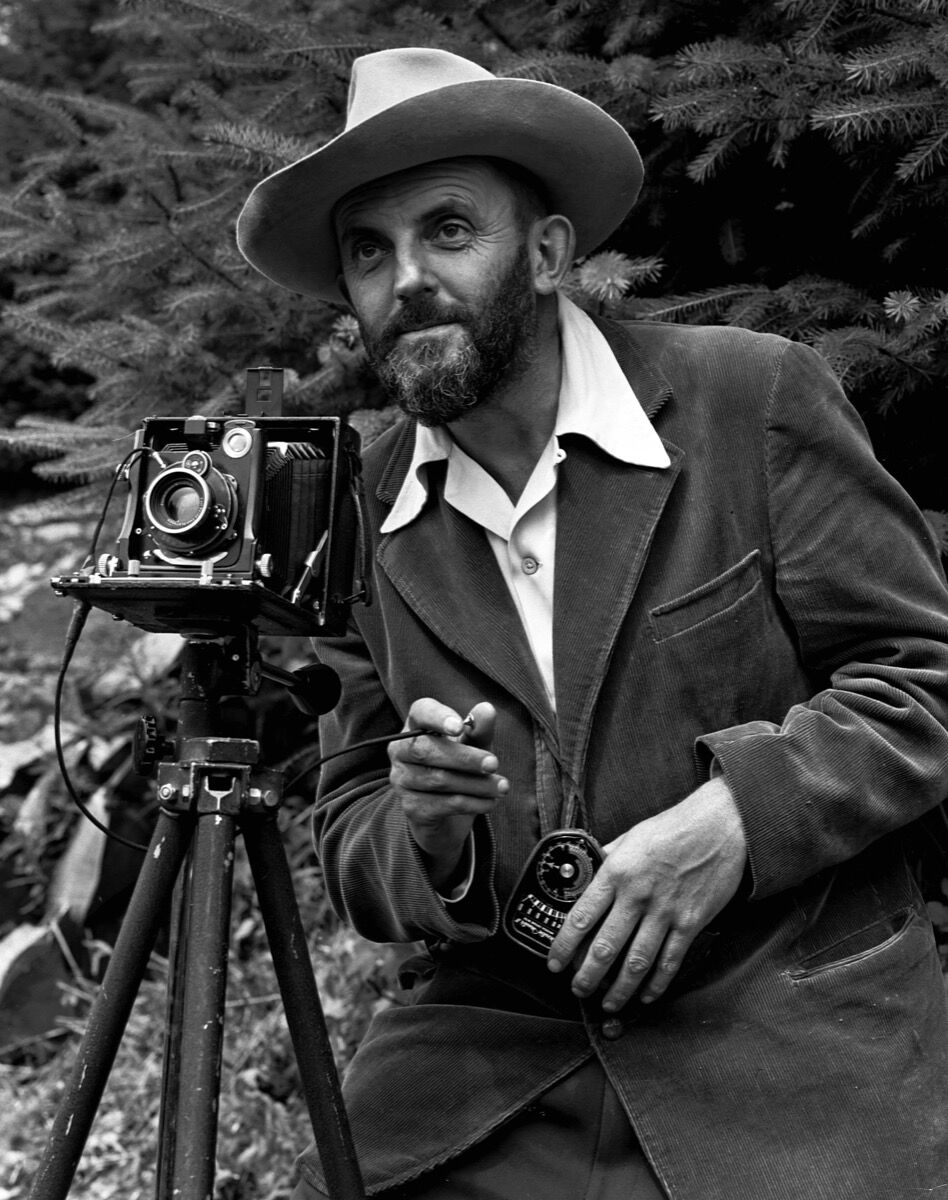 On April 10, 1927,
Ansel Adams
clambered through Yosemite’s LeConte Gully trail with four of his friends in tow. Their destination on that chilly spring morning was Half Dome, the park’s iconic granite summit rising some 5,000 feet from the valley’s floor.
The aspiring photographer had made the trek before, once with an uncle and later with a painter acquaintance, who nearly broke his neck making the treacherous descent back down the narrow gully. But this time, Adams was intent on capturing the perfect shot of Half Dome to add to his portfolio—a shot that would launch his career as one of the most influential photographers of the 20th century.
For most of his 25 years, Adams had considered himself a musician first and a photographer second. He was an accomplished pianist, and had spent a winter in San Francisco teaching music lessons and performing as part of the Milanvi Trio. But it soon became clear to Adams that his level of talent would only garner him local fame, never national.
So he decided to chart a new course. In 1926, his mentor Albert Bender, a patron of the arts in San Francisco, tasked him with producing a portfolio of large-format black-and-white photographs of mountains that he would finance and help the young artist sell. As it turned out, Adams already had 11 of the 18 images he needed to complete the set. But he still hadn’t captured the sheer cliff face of Half Dome to his satisfaction—and that was what he set out to do that April day.
He’d taken photographs of Half Dome before. Several were the results of his very first experiments with a camera, after being gifted a Kodak Brownie at age 14 during a family vacation to Yosemite. One of his favorite images from this time was an accidental upside-down shot, snapped as he tumbled off a tree stump. He’d also photographed the monolith more recently, hiking up to the park’s Glacier Point overlook for a panoramic view of its eastern portion. But the resulting photo, with the rock face hooded in shadow, still lacks the drama of Adams’s later images. 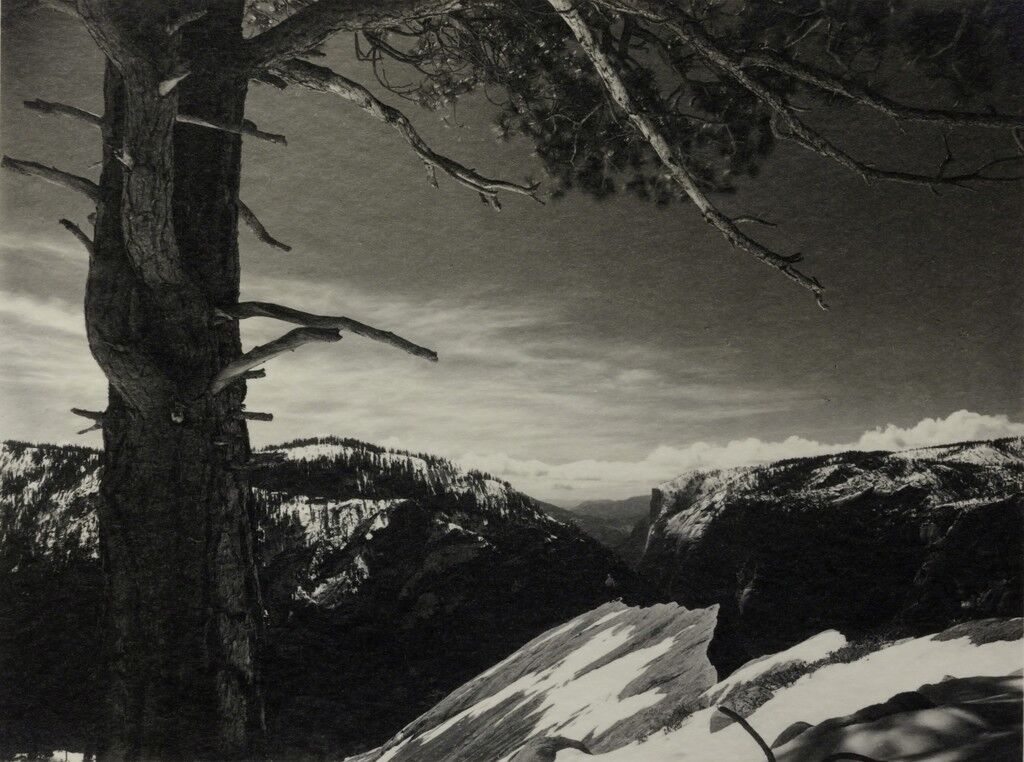 Ansel Adams
On the Heights, Yosemite National Park, CA, 1927
The Ansel Adams Gallery
He would need to get closer to Half Dome, he realized. So Adams and his friends set out to reach the Diving Board, a rock slab hanging some 3,500 feet above the valley floor. It wasn’t an easy hike in the first place, and Adams was loaded down with a 40-pound pack containing his camera, a handful of filters and lenses, and 12 glass plate negatives. This single-minded dedication would become typical of the photographer’s later process, in which he would spend weeks at a time in the mountains, scouting out the perfect location for a single photograph. (In fact, during two such trips, he missed the births of both his children.)
En route to the Diving Board, Adams made several exposures, and by the time the group reached Half Dome, he had just two plates left. They sat down for lunch, waiting for the sun to move high enough in the sky to illuminate the entire cliff face. By 2:30 p.m., Adams was ready. For his first shot, he used a yellow filter that he often placed over his lens to subtly darken the blue sky. But almost as soon as he’d released the shutter, he knew something was off.
“I began to realize, why, I’m not creating anything of what I feel, because I know the shadow on the cliff is going to be like the sky; it’s going to be gray,” Adams later explained. “It will be an accurate picture of Half Dome, but it won’t have that emotional quality I feel.”
Instead, for the second exposure, he used a deep red filter that would darken the sky almost to black and emphasize the white snow on Half Dome’s cliff face. The filter made all the difference, as Adams quickly realized when he developed the photo later that night. He considered Monolith, the Face of Half Dome, Yosemite National Park, California (1927) his “first really fine photograph,” a career-changing image that marked his first successful “visualization”—Adams’s term for carefully determining all elements of a photograph before ever releasing the shutter. Over a decade later he would institutionalize this idea with his Zone System, a photographic technique that is still taught in schools today. 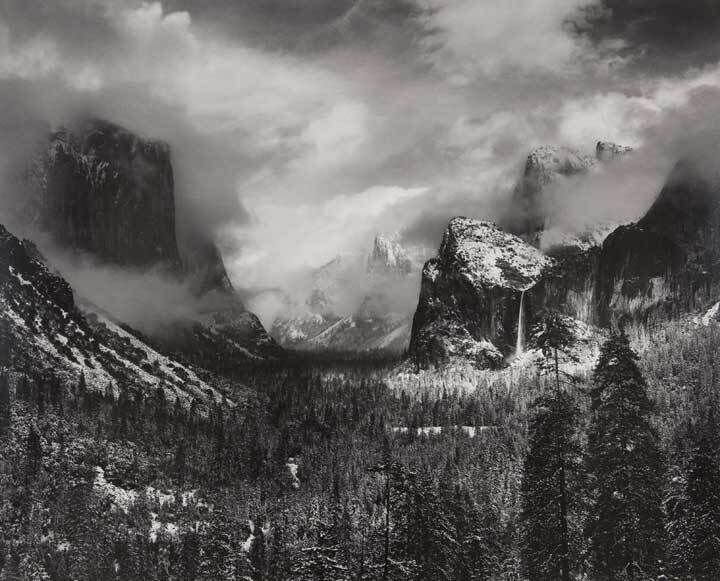 Ansel Adams
Clearing Winter Storm, Yosemite Valley, California, ca. 1937
Weston Gallery
Advertisement
On the strength of Monolith and the other photos from his portfolio, Adams’s commercial and artistic career began to blossom. He would go on to become of the greatest photographers of his time, the man whose images remain synonymous with the American wilderness even today. Together with
Edward Weston
, he would found the f.64 group that reimagined the photographic medium; he was instrumental in the creation of the photography department at the Museum of Modern Art.
And while Monolith may have been Adams’s first significant photograph of Yosemite, it certainly wasn’t his last. Many of his most famous images, from Clearing Winter Storm, Yosemite National Park, California (1944) to Autumn Moon, the High Sierra from Glacier Point, Yosemite National Park, California (1948), preserve the park in all its natural splendor—enthralling generations of Americans just as Yosemite had enthralled the photographer ever since his first teenaged trip.
Abigail Cain
Related Stories