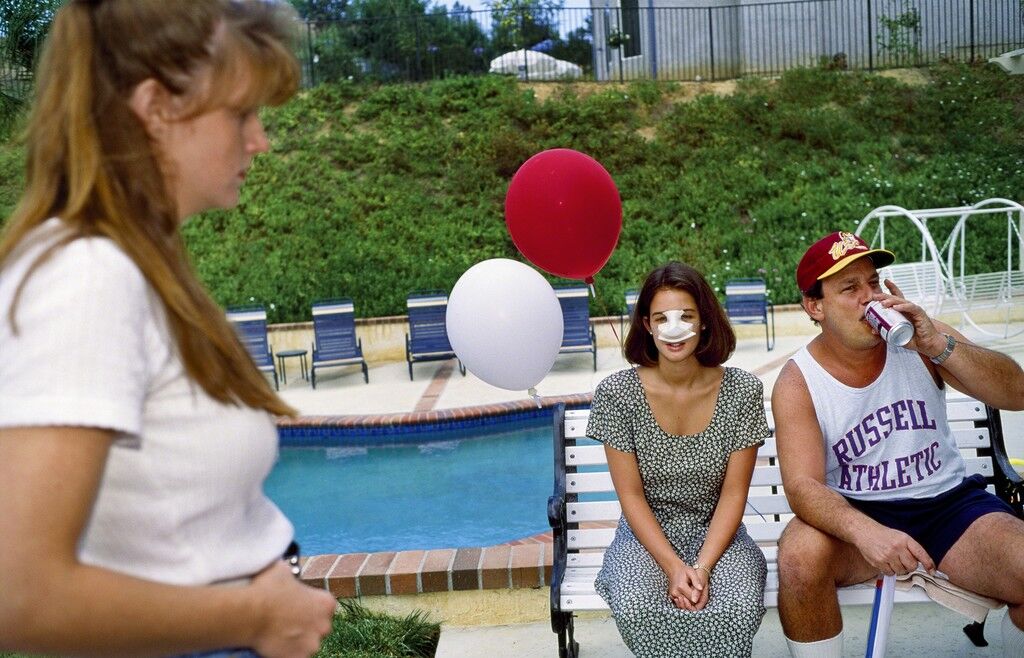 Lauren Greenfield
Lindsey, 18, at a Fourth of July party three days after her nose job, Calabasas, California, 1993
Fahey/Klein Gallery
There were many people for whom the election of Donald Trump as President of the United States came as a total surprise. Photographer
Lauren Greenfield
was probably not one of them. For nearly three decades, Greenfield has been meticulously documenting wealth: those who have it, those who aspire to it, and its pernicious influence on our culture.
In that period, she’s watched how a worship of prosperity has spread, transmitted and amplified through technology, popular culture, and the media. Is it any wonder that someone who so perfectly embodies our fascination with wealth, and all the emptiness and artifice that so often lies beneath it, ultimately snaked his way into the White House?
“Generation Wealth,” opening later this month at the International Center of Photography, features over 200 of Greenfield’s photographs from her decades-long exploration of the culture of affluence in its many facets. It’s accompanied by a mammoth book of the same name, published by Phaidon this May and bound (naturally) in gold cloth.
Greenfield decided to bring these works together, she said, in the aftermath of the financial crisis. She, like many Americans, found herself reflecting on what had caused an entire nation, seemingly, to run amok.
She realized in looking back at her early work that what she had documented was “a time of cultural change, and of change in our values and change in technology, which was a big driver of these values,” she said. “Where I started ended up being really important, because it was kind of the beginning of all of these trends which I ended up covering for 25 years.” 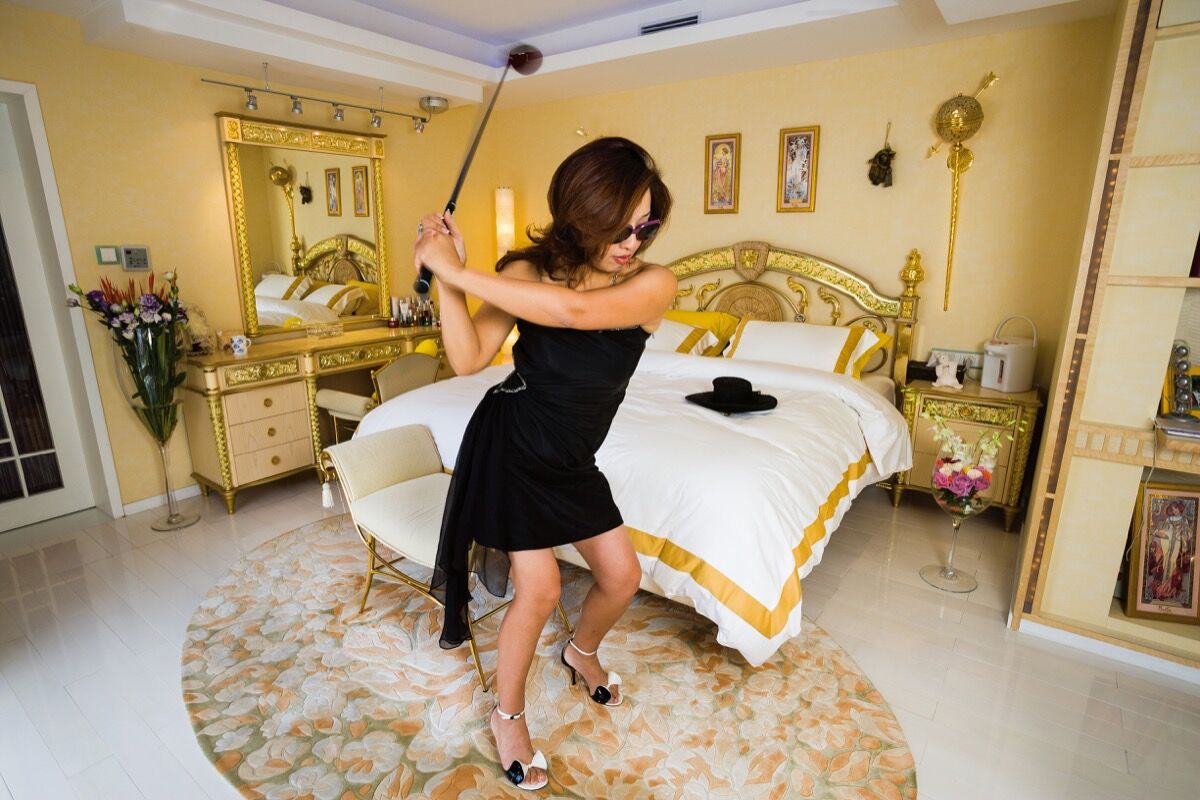 3 Images
View Slideshow
Greenfield had not intended to become a visual chronicler of the wealthy and their aspirants, an F. Scott Fitzgerald or an Edith Wharton wielding a camera instead of a pen. She grew up in what was then the grungy neighborhood of Venice, Los Angeles, but attended the ritzy private high school Crossroads, alongside the children of Hollywood’s rich and famous. After graduating magna cum laude from Harvard University in 1987 with a degree in visual and environmental studies, she embarked with her mother, a psychology professor, on an assignment for National Geographic in Chiapas, Mexico. She quickly realized her status as a cultural outsider (and the discomfort her subjects felt with being photographed) was hindering her work; she longed instead to return to Los Angeles and “[turn] the camera on my own culture,” she said.
That project became her first book, Fast Forward: Growing Up in the Shadow of Hollywood (1997), a broad exploration of Los Angeles youth culture, which took her to East and South Central L.A. to photograph the young people who were part of, or adjacent to, the gang culture that Crossroads students, enamored of hip-hop and graffiti, tried to emulate. At the same time, she notes, the youth in South Central and East L.A. themselves lusted after the markers of wealth (gold chains, designer clothes) the Crossroads kids took for granted.
“There was this kind of homogenization of culture that I was seeing from kids from really different backgrounds, even in the ’90s,” said Greenfield. “Part of Fast Forward is about the rich kids and [their] disproportionate influence.”
So what does Generation Wealth look like? Greenfield notes that it’s “really not about wealth, it’s more about the influence of affluence and the aspiration to wealth.” As the photographer writes in the introduction to the book, her subjects “seek material-based status, from Minnesota to Milan, South Central Los Angeles to Shanghai, Dubai to Moscow.” At one end of the spectrum, there are mansions, designer handbags, two-year-olds getting pedicures, the staid rituals of France’s aristocrats, portraits on the tarmac in front of a private jet.
But just as compelling, if not more so, are the images of what it looks like to merely aspire to that lifestyle, with varying degrees of success. There are unfinished homes in Dubai after the financial crisis, women making thousands of dollars a week as strippers to support their families, people posing on a toilet made of solid 24-karat gold in Hong Kong, four-year-olds sporting tiny false teeth at beauty pageants, the funeral of a teenage gang member in an L.A. suburb. Across the social and economic landscape, power and money tends to concentrate in the hands of men. 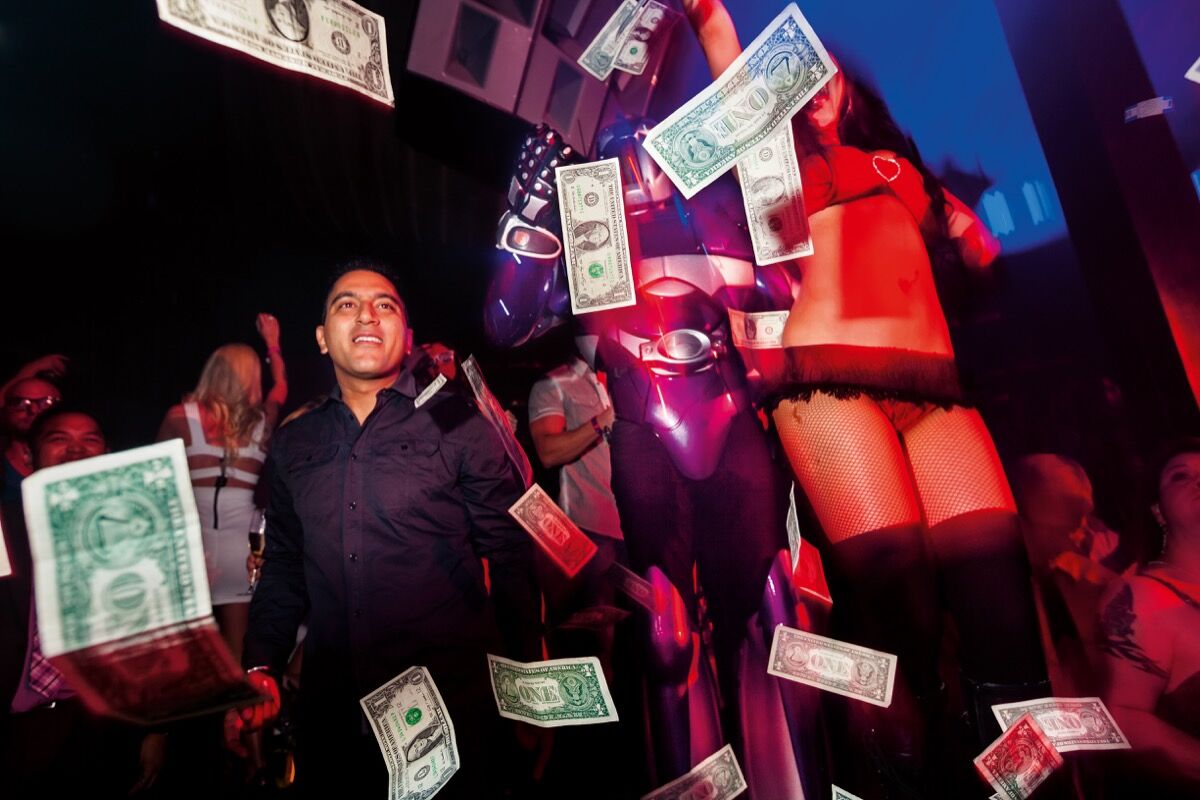 Advertisement
“It was important to me to include so many different kinds of places because in a way, what I’m looking at are the similarities more than the differences,” Greenfield said.
In chronicling Russia’s emerging elite, for example, Greenfield meets a Moscow real estate developer whose luxury homes come pre-stocked with a library of the finest Russian, British, French, German, and American literature, and an art collection for which he’s also printed a hefty catalogue that the buyers of his homes can leave prominently displayed, in case there’s any doubt as to how important the art collection is. But Greenfield is quick to point out that deploying culture to signal taste and class is on a continuum with the behavior of a newly flush finance bro in New York, only more visible.
“As an oligarch, you could buy culture. And in a way that was the ultimate thing to purchase: education, class, culture…kind of what money can’t buy,” said Greenfield. That explicitly transactional approach to culture might seem extreme, she said, but it can make visible similar, if more hidden, dynamics around us.
“In New York, you might have a wealthy person who hires an art consultant who buys for them, and so the owner doesn’t actually know anything about the art,” she said. “Well, that’s a hard thing to document here: It’s so subtle, they probably would not want to share that they don’t know the provenance of their actual art.”
In both the book and the show, Greenfield’s photos are accompanied by the subjects’ own words. There is a series of portraits of Jackie Siegel, the wife of time-share mogul David Siegel, dubbed the Queen of Versailles (after the spectacular mega-mansion the couple was building before the economy collapsed in 2008). Siegel started her career as an engineer at IBM in upstate New York, but quickly realized she’d fare better modeling in New York City and marrying rich. “You can never be too rich or have big enough boobs,” she told Greenfield, reflecting on her four breast augmentations (whose end result fills the entire frame of one photo). 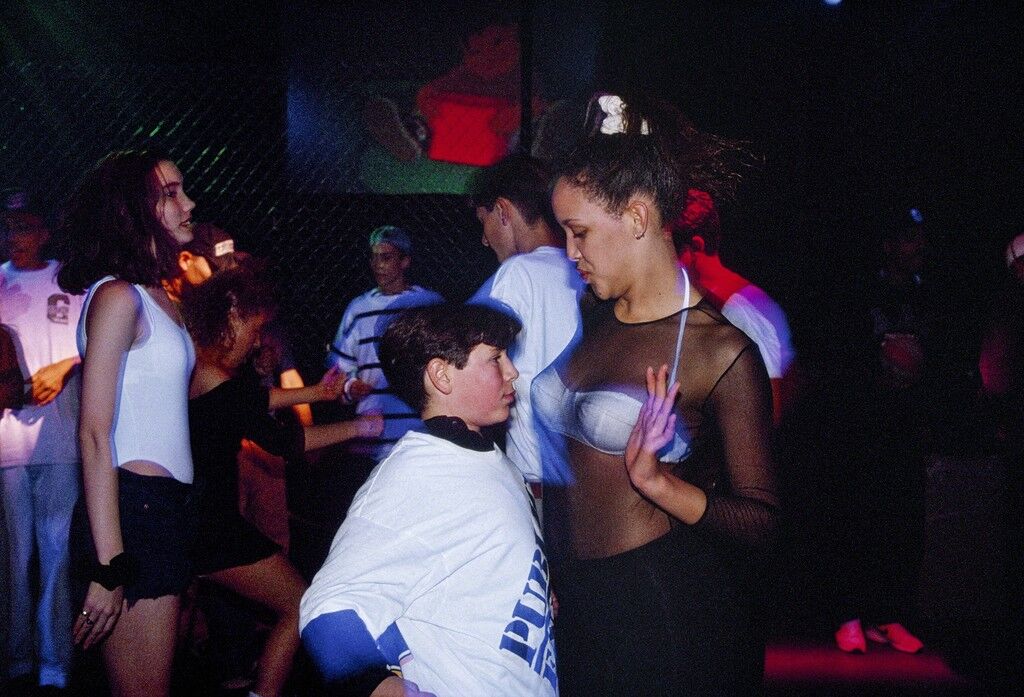 Lauren Greenfield
Adam, 13, and a go-go dancer hired to entertain at a bar mitzvah party at the Whisky a Go Go nightclub in West Hollywood, 2012
Fahey/Klein Gallery 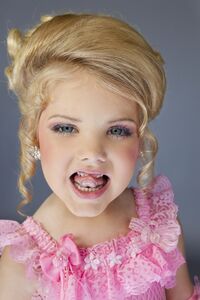 3 Images
View Slideshow
Or consider 13-year-old Adam, a subject in Fast Forward who told Greenfield that he and his peers feel compelled to spend $50,000 on a bar mitzvah or risk being unpopular. “Money affects kids in many ways. It has ruined a lot of kids I know. It has ruined me.” His parents know that, and send him to summer camp in Michigan where “the kids are so different,” he said. “They are nice.”
“He had so much insight,” Greenfield said. “He was kind of a social critic, but was still affected by these pressures, and right in the middle of them.”
That helped her see that the subjects’ voices were a critical component of the project, documentation that rounds out—or often stand at odds with—the accompanying images. “A lot of my work is about this conflict and contradiction between image and substance,” she said.
“Photography is a great medium to think about image, because I can use glossy colors and shiny surfaces and strobe,” Greenfield continued. The interviews, by contrast, “provide a deeper cut, sometimes even a contradictory cut to what’s going on. The photographs are really my perspective, and the interviews allow their voices to come through in a deeper way.”
She knows that ambivalence from her own relationship to material goods,  even as her decades-long dive into the culture of wealth has made her extra conscious of how destructive it can be to covet.
“If I didn’t care about those things I don’t think I’d be able to document it either,” she said. “I’m not immune to the things that I cover. When I go into a store I’m…attracted and excited by shiny objects. I kind of know that about myself so I try to stay out of that environment unless I really want something or need something.” 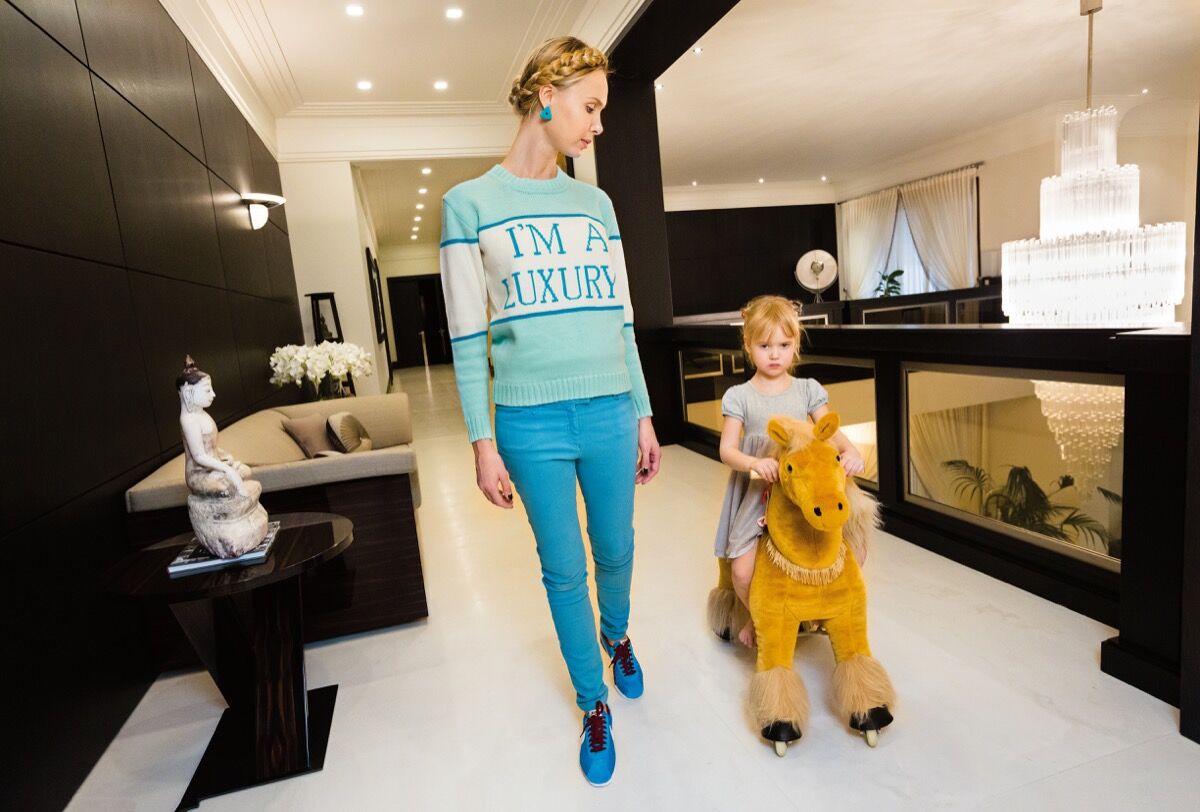 Greenfield credits her kids with holding her accountable, describing a recent incident when her youngest son chastised her for putting a $55 face cream in the grocery basket. Perhaps more Americans could use a similar watchdog. The nation’s credit card debt hit highs this year not seen since 2009, and defaults have begun to climb, too. The worship of affluence, by some measures, is as strong as ever, with Donald Trump its reigning deity. Greenfield’s ongoing examination of wealth (she’s currently working on a related documentary film) feels more urgent than ever.
Incidentally, Trump is one person who she never got to capture on film, even though she tried, although she observed that time-share magnate David Siegel (who called Trump’s election “the greatest thing that’s happened to me since I discovered sex”) embodied many of the same qualities.
“The one dream shoot that I never got for Generation Wealth is the President, because he embodies so many of the qualities of Generation Wealth,” she said. “That was probably the fish that got away.”
Anna Louie Sussman
Related Stories