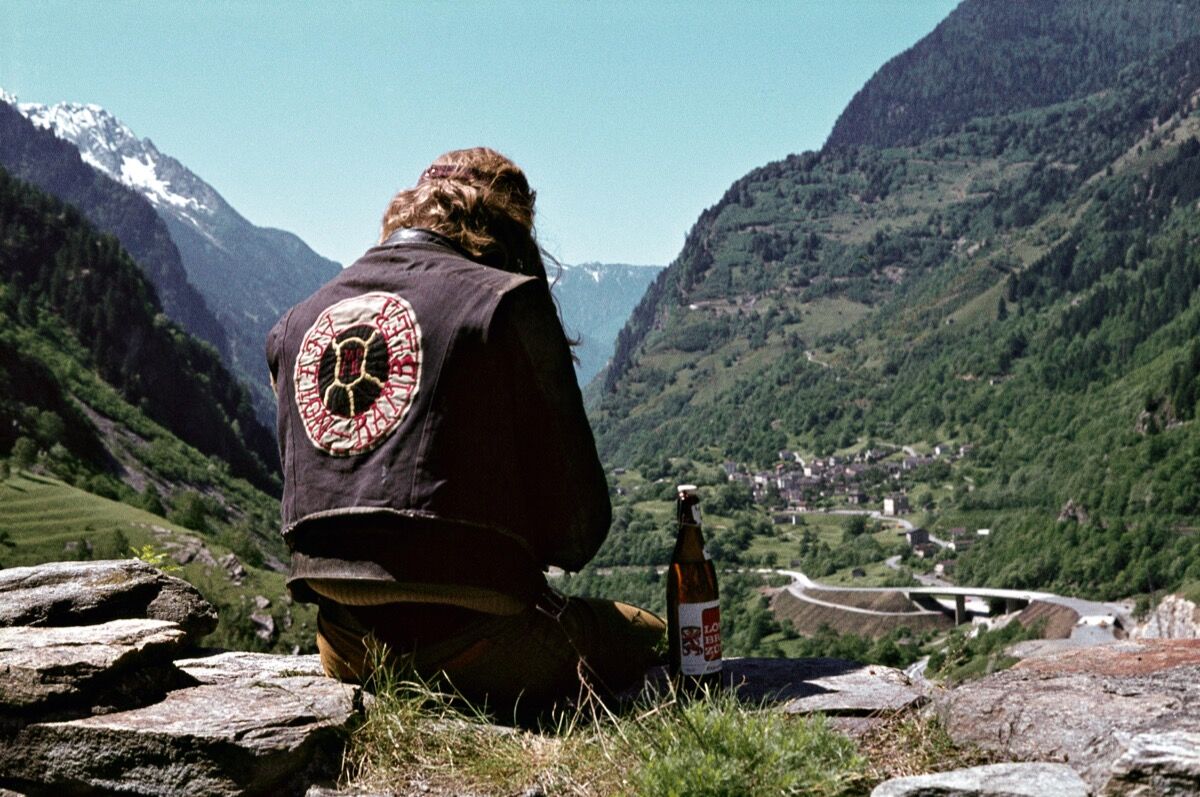 According to Yves Saint Laurent, “fashions fade, style is eternal.” The aphorism helps explain why
Karlheinz Weinberger
’s pictures from the 1950s and ’60s remain cult favorites in the 21st century. The Swiss photographer captured rebellious youth in outlandish clothing, but it’s not the cut or fabric that makes the images compelling—it’s the attitude. Big hair and bandanas come and go. Counterculture movements, and defiance via wardrobe, are here to stay.
Born in 1921, Weinberger lived a mostly uneventful life, working in the warehouse department of Zürich’s Siemens-Albis factory. He became fascinated with photography as a teenager and began shooting for Der Kreis (The Circle) in the late 1940s. The magazine, connected with a gay underground club of the same name, celebrated homoerotic culture. The publication sought to create a gay community, with little regard for politics or advocacy. Weinberger took a similar approach in his subsequent series. Tinged with homoeroticism, his images don’t explicitly promote change. Instead, they celebrate the styles and quirks of a particular subculture.
In his most famous series, “Halbstarken” (begun in 1958), wild outfits tell a larger story about the postwar impact of American culture on Western Europe. The name of the group, which means “half-strongs” in German, adequately conveys both the young subjects’ rough demeanor and ultimate harmlessness. The Halbstarken emerged after World War II across Germany, Switzerland, and Austria, incorporating the iconography of rock n’ roll and Hollywood into their rebellion. They sought to defy the political establishment and the conformity that led to nationalist fervor and devastating worldwide conflict. If this made plenty of sense in Germany, the Swiss protesters had an ironic edge: Their country didn’t participate in either world war. 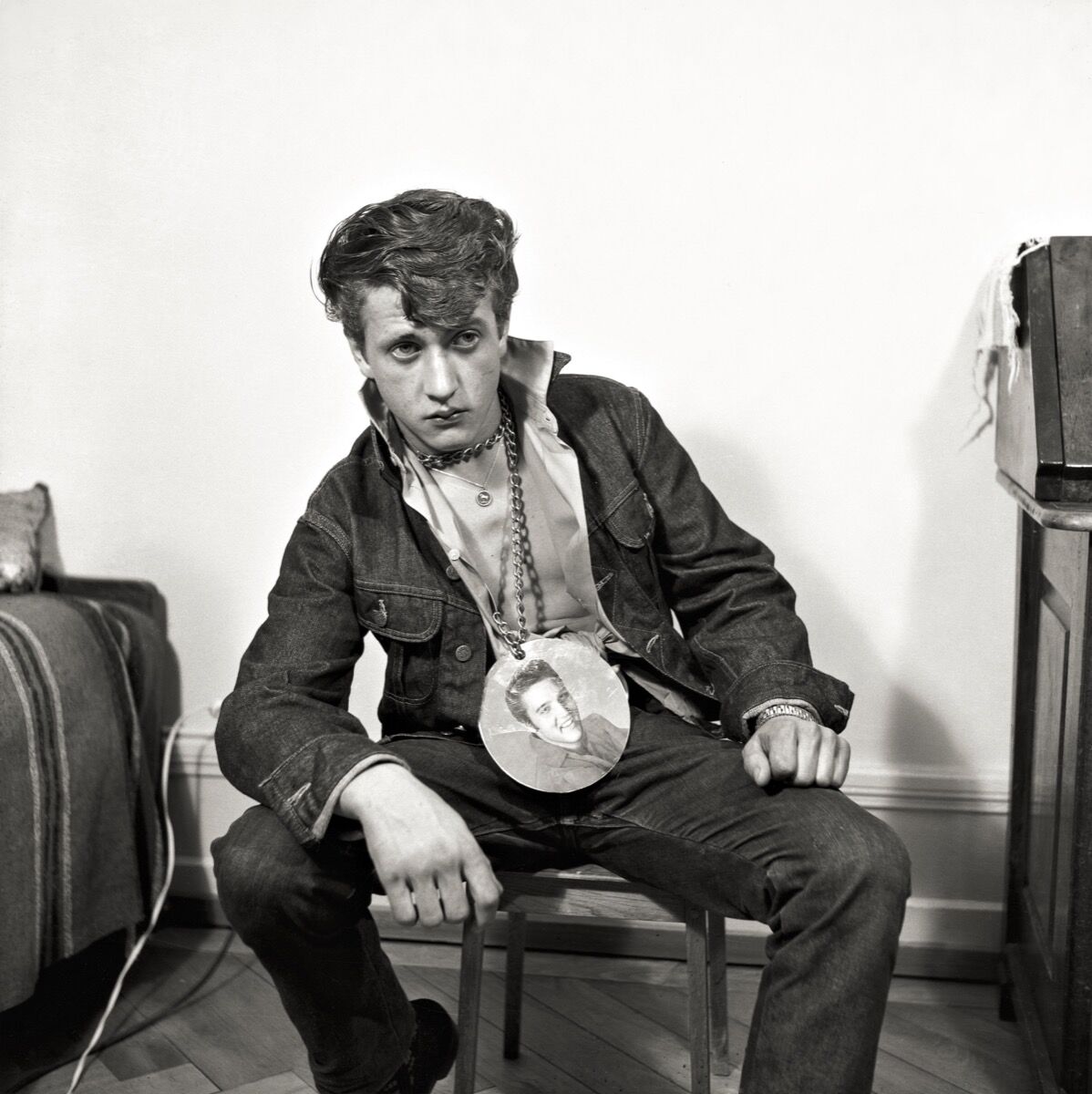 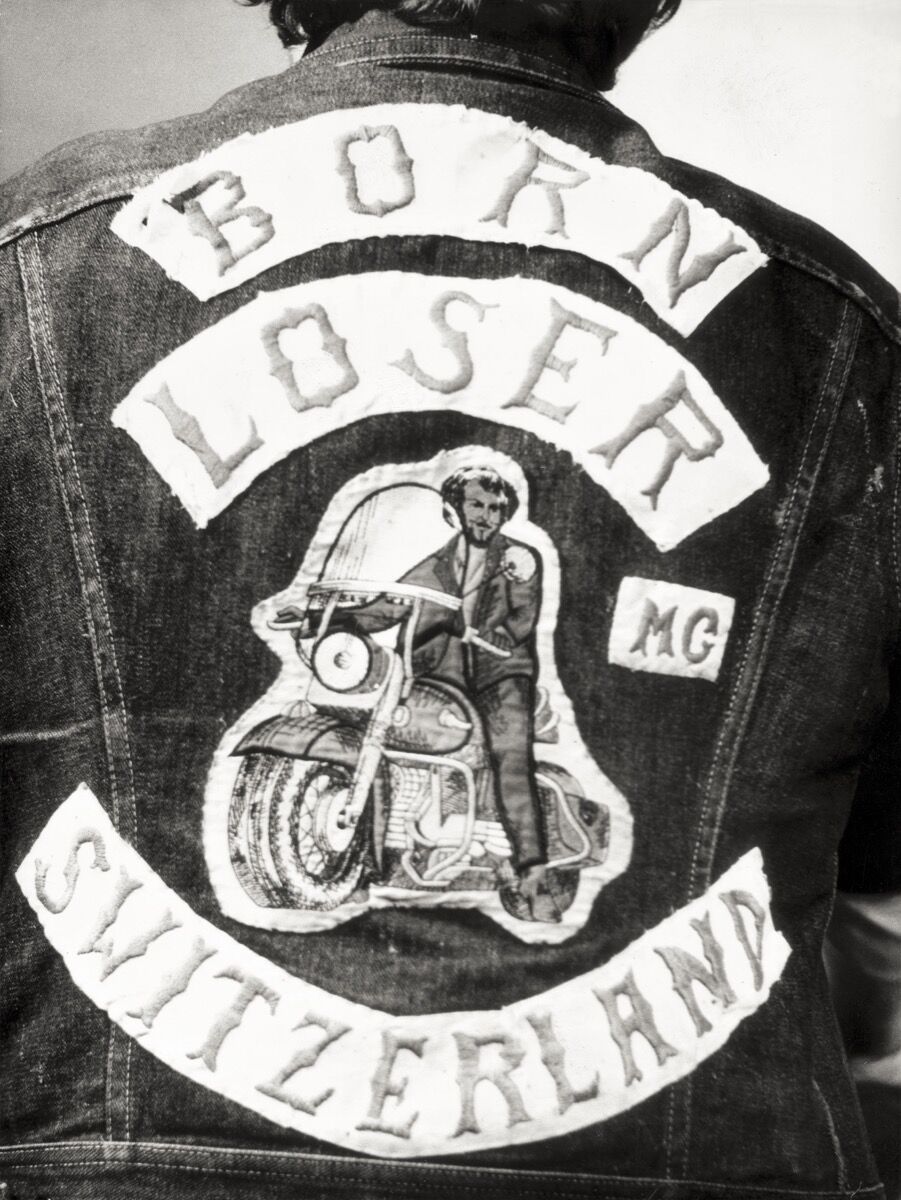 In one image from the series, five men walk down a tranquil path toward a forest. They all wear dark, fitted jackets with bat shapes on the back, the word “VAMPIRE” across the wingspan. Above that logo, the jacket reads “Strangers Gang” and below, “Basel.” Fringe dangles from some of the coats, and names at the top differentiate the wearers: Red, Ted, Kid, Ronny. Each seems pulled, at random, from some greaser-era flick. It’s a funny image, particularly from a contemporary American viewpoint. Surrounded by nature, ostensibly hailing from a tranquil and even stodgy city, these men’s implied insubordination and threat are totally incongruous with their bucolic environment. Their clothing doesn’t advocate any cause beyond attracting attention.
Beehive hairstyles, leopard prints (on Speedos and scarves), and cowboy boots abound elsewhere in the series. Studded jackets are the favored outerwear, one with a zebra pattern on the pocket. Men wear polka dot scarves and long chains around their necks. Metal bolts and nuts hold together one pair of jeans; men’s crotches are often in focus. Close-up shots feature a giant horseshoe hanging over one man’s zipper, and massive belt buckles depicting portraits of James Dean and Elvis Presley.
When the subjects aren’t outdoors, they’re often in Weinberger’s own book-filled apartment. As they let Weinberger into their lives, so too did he let them into his. The series began when the photographer simply asked members of the Halbstarken if he could take their pictures on the street. He’d gain their trust, and they’d introduce him to more friends. A close association formed between the artist and his muses, though Weinberger always remained squarely on the outside of the group. He was an eternal observer. 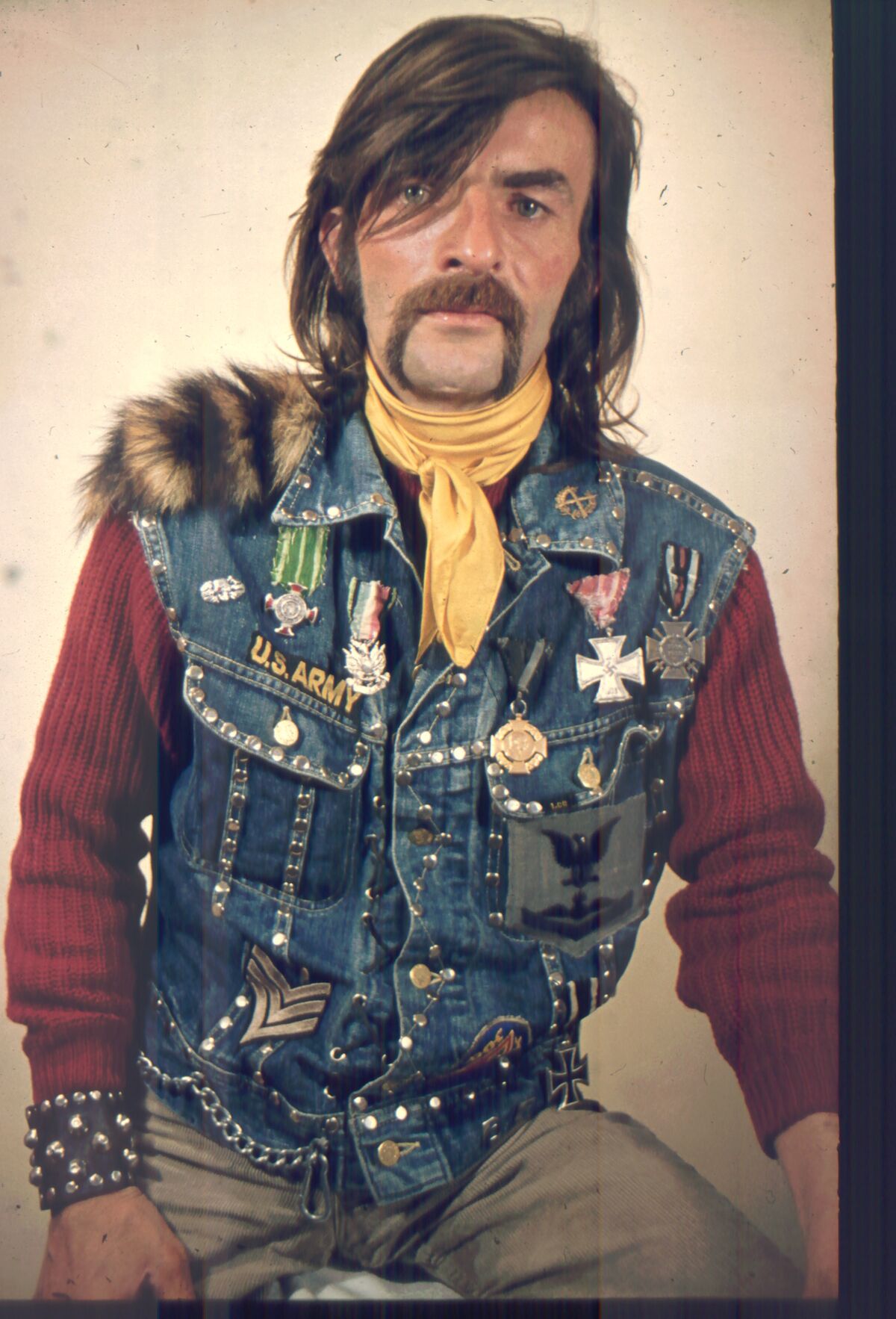 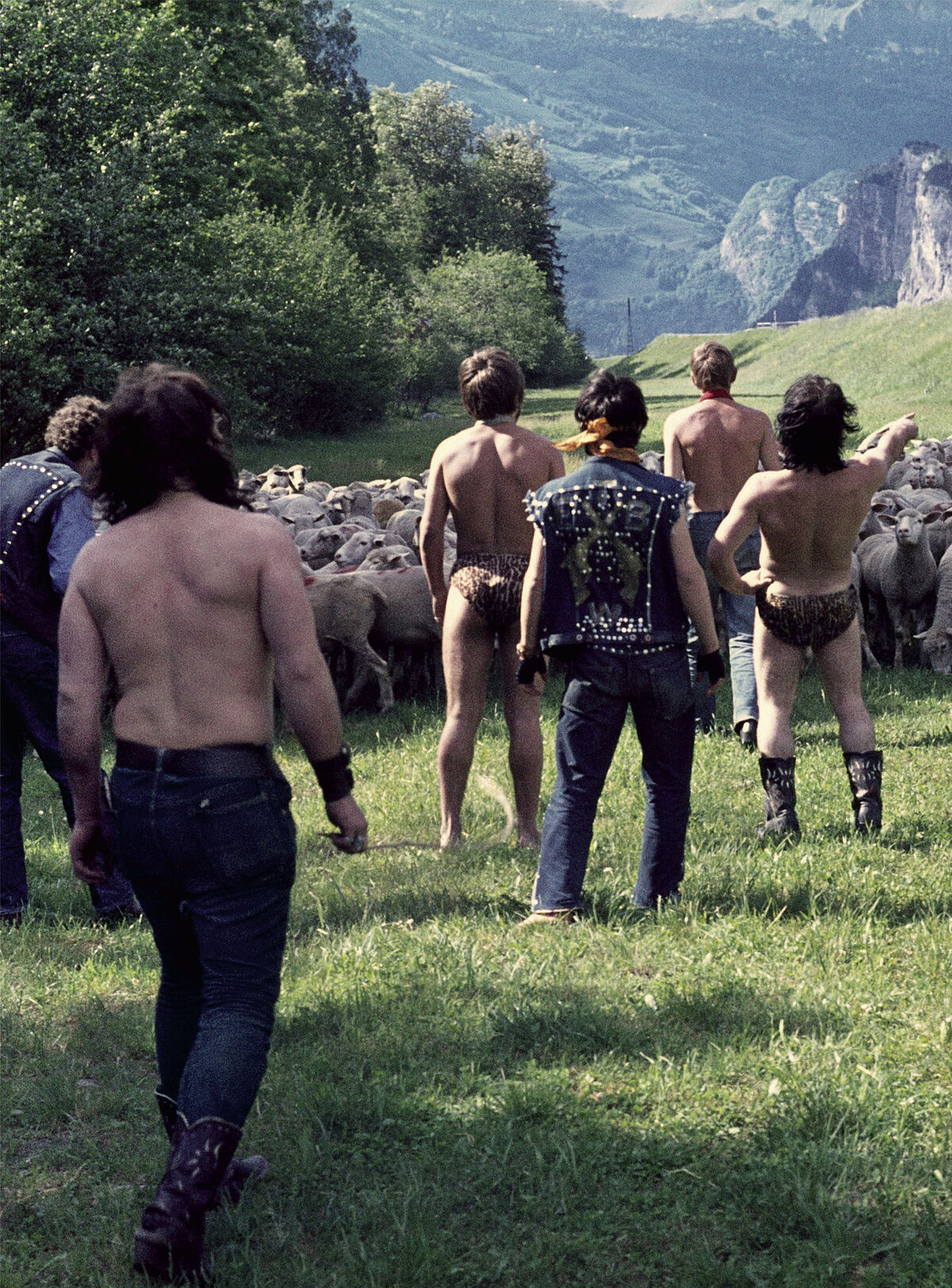 Advertisement
“There were no clubs or bars to go for young people at that time,” explains former Swiss Institute director Gianni Jetzer, who curated an exhibition of Weinberger photographs there in 2011. “So they would hang out at his house and he would set up a photo studio or photograph them hanging out and drinking beer. He became like an older brother to them. Weinberger had different identities.”
In the late ’60s, Weinberger turned his camera toward bikers. Again, he captured ragtag men in the Swiss landscape. In one image, men in Speedos, cowboy boots, jeans, and studded vests stand in front of a herd of sheep. The ridiculous and the sublime merge in a humorous, striking representation of men at odds with their country.
In a 2011 interview with The Fader, film director and Weinberger collector John Waters tried to describe the aesthetic that the artist captured. It wasn’t kitsch, he suggested, nor camp. “These people aren’t so bad they’re good, these people are fucking amazing looking,” he said of Weinberger’s subjects. “These people have fashion gall, they were trendsetters. There are books on them 40 years later. They are artists.”
As for Weinberger’s motivation, Waters suggests voyeurism combined with a deeper yearning. “He was obsessed by this little group of people, he wanted to belong,” he says. Certainly, Weinberger insinuated himself with the Halbstarken, gaining their trust with his camera. The Halbstarken wanted to be seen; Weinberger immortalized them. He was an outsider himself, according to academic Daniela Janser, who contributed to the recent Steidl monograph, Swiss Rebels. “Intimacy was something that he, severely myopic, created with his charisma and his camera,” she writes, “although the camera has always been a tool for building not just bonds but also obvious boundaries.” 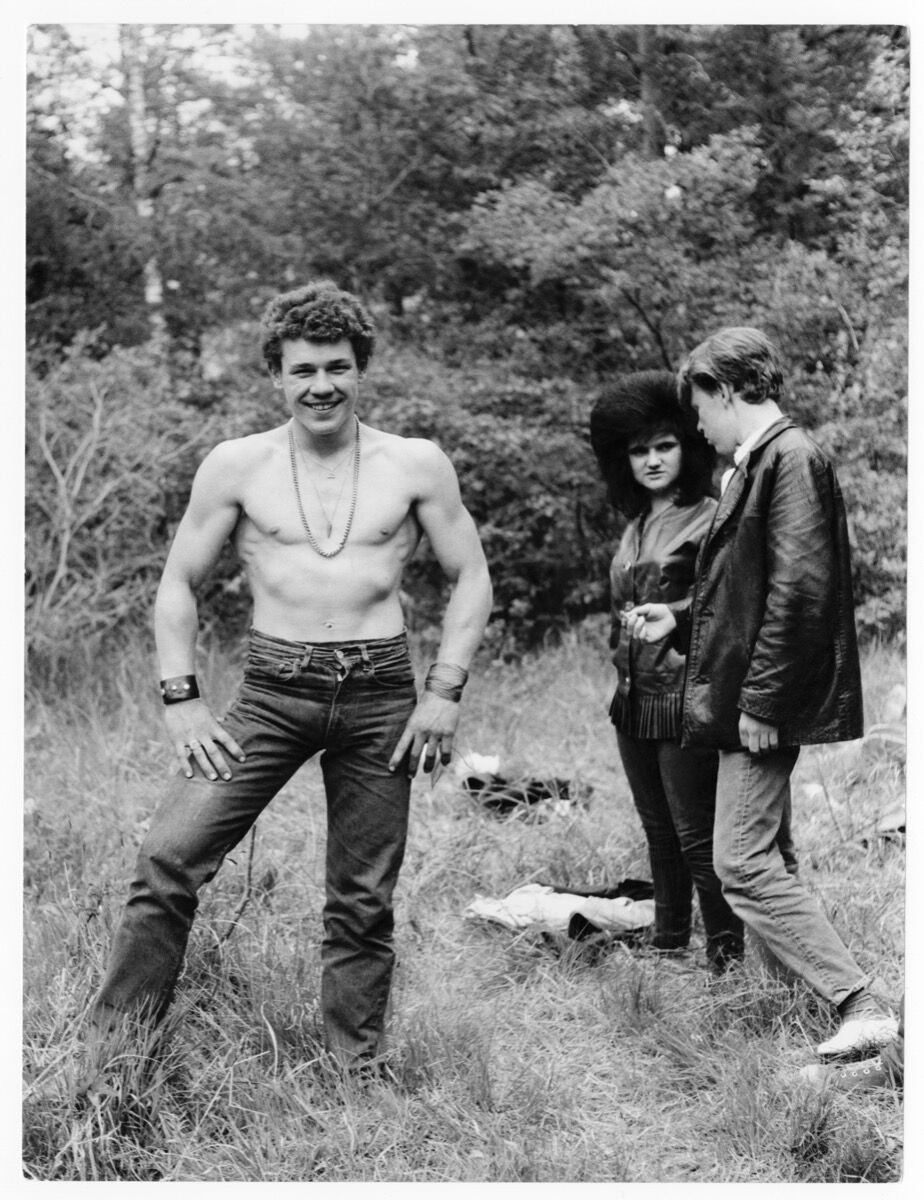 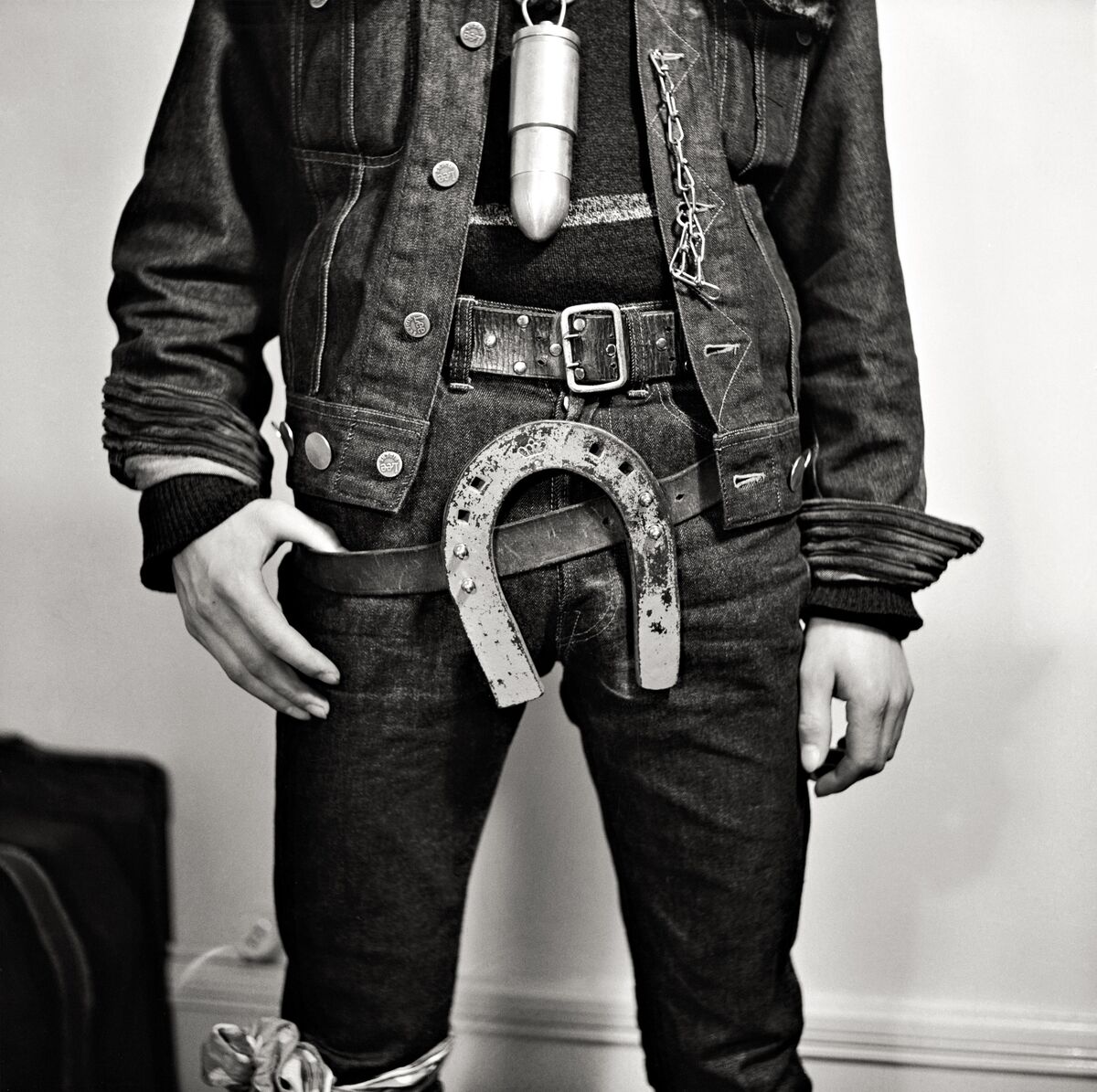 Janser also describes what made Weinberger’s approach so unique. “His photography was not only explicitly apolitical and entirely aesthetic,” she writes, “but also never depicted violence, just as, by the way, even the sexuality it portrays is remarkably free of coercion, domination, and power games.” If Susan Sontag claimed the camera to be both a phallus and a weapon, Janser argues that Weinberger offered an alternate, more respectful relationship between artist and subject.
Weinberger’s most potentially fraught series, “Alex,” focuses on a Zürich prostitute of the same name from 1995–2006. The photographer invited Alex to his apartment, where the subject would drink, smoke, masturbate, and ejaculate for the camera. In much the same way that photographer
Philip-Lorca diCorcia
photographed male prostitutes for a fee close to what they’d charge a trick, so too did Weinberger pay Alex. “He was very respectful. He never touched me,” recalls Alex in the Swiss Rebels monograph. “For him, the photographs were the most important. He never talked about his sexual preference. He liked what I did. And for sure afterwards at home he jerked off to them.”
The pair chatted after the studio sessions, and Weinberger’s demeanor allowed his subject to feel comfortable being himself. Desire is evident in the images, which showcase Alex’s naked torso and semen-splattered stomach. Yet, there’s also a sense of respect for one man’s complexity, beyond just his body. Alex sits, half-clothed, in front of a stack of books in Weinberger’s apartment. He smokes, he ponders, he looks out a window. Weinberger avoids exploitation, instead turning his work into a cooperative and mutually gratifying process.
Most of Weinberger’s photographs remained private for decades, reaching international galleries just years before his 2006 death. Created without commercial and art world concerns, his body of work indicates a devotion to the medium as well as a reverence (and barely restrained obsession) with its subjects. Carefully built trust contributed to rich images of multi-dimensional characters and the landscapes they inhabited. The style in the photographs became Weinberger’s own: comically strange, singular, intimate, and refreshingly unexpected.
Alina Cohen
Related Stories