The Photographer Capturing the Superstars of Drag The first drag performer that Greg Bailey photographed was Willam Belli of RuPaul’s Drag Race fame. It was 2012, before Drag Race became a primetime sensation, and it was easy to send a Facebook message to a drag performer to schedule a shoot. Bailey, who is based in Brighton, did just that; they met in London while Belli was in town. Bailey recalled walking up to her hotel room. “[I was] unbelievably nervous, because it’s Willam,” he said. “She’s a self-proclaimed asshole.”
He promised Belli that one day she’d be a cover star, but the queer magazines he was working with at the time were resistant, and perhaps scared, to have a drag queen on the cover, he explained. So in 2015, he published the first issue of Alright Darling,a zine where drag would be not only on every cover, but on every page.
5 Images
View Slideshow 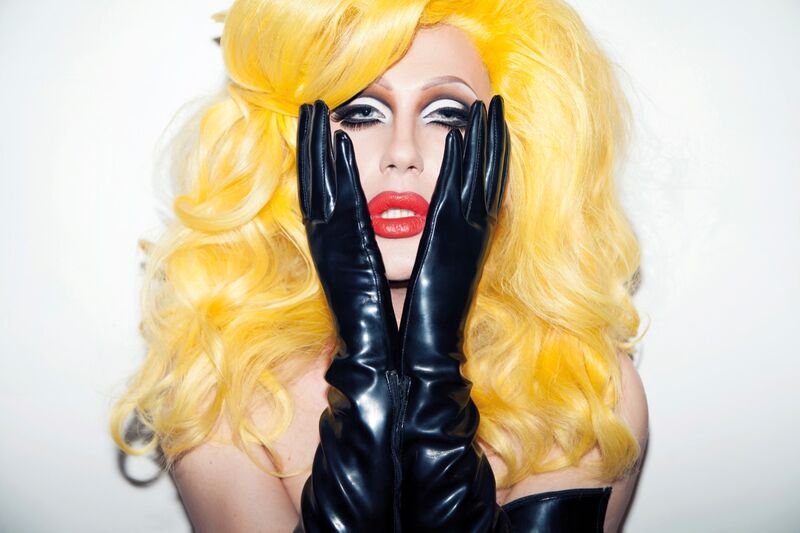 The phrase “alright, darling” was Bailey’s answer to everything—an everyday expression he used as an affectionate greeting, a come-on, or a playful taunt. “It was out of frustration,” Bailey said of the birth of Alright Darling. “But seeing what was around the corner, I wanted to do this for myself.” Bailey, who is not a full-time professional photographer, shoots in his spare time, on weekends and holidays and after work, often driving two hours from Brighton to London between shifts at a retail job. He was driven by a creative impulse and a love of drag and queer culture, yet he’s since noticed a change in the significance of his work.
While drag is as old as the gender norms it flouts, it’s the level of visibility that has changed in recent years. Where there’s a line between masculine and feminine, drag has crossed it. In 1921,
Man Ray
captured
Marcel Duchamp
’s female alter ego, Rrose Sélavy. In 1969, the activist and drag queen Marsha P. Johnson became emblematic of queer liberation in America following the Stonewall riots. Divine, star of
John Waters
’s filthiest films, posed for
Andy Warhol
almost 10 years before the artist himself posed in drag in 1981. But it wasn’t until RuPaul became the first face of MAC Cosmetics in 1994 that a drag queen fronted a major ad campaign. Drag’s next wave of popularity began to swell.
Editors a few years ago may have lacked the courage to put a drag performer on the cover, but Bailey was tapping into a cultural phenomenon moments before it boomed. “I don’t like the word ‘lucky,’” he explained, “but I think I hit the nail on the head with that timing.” 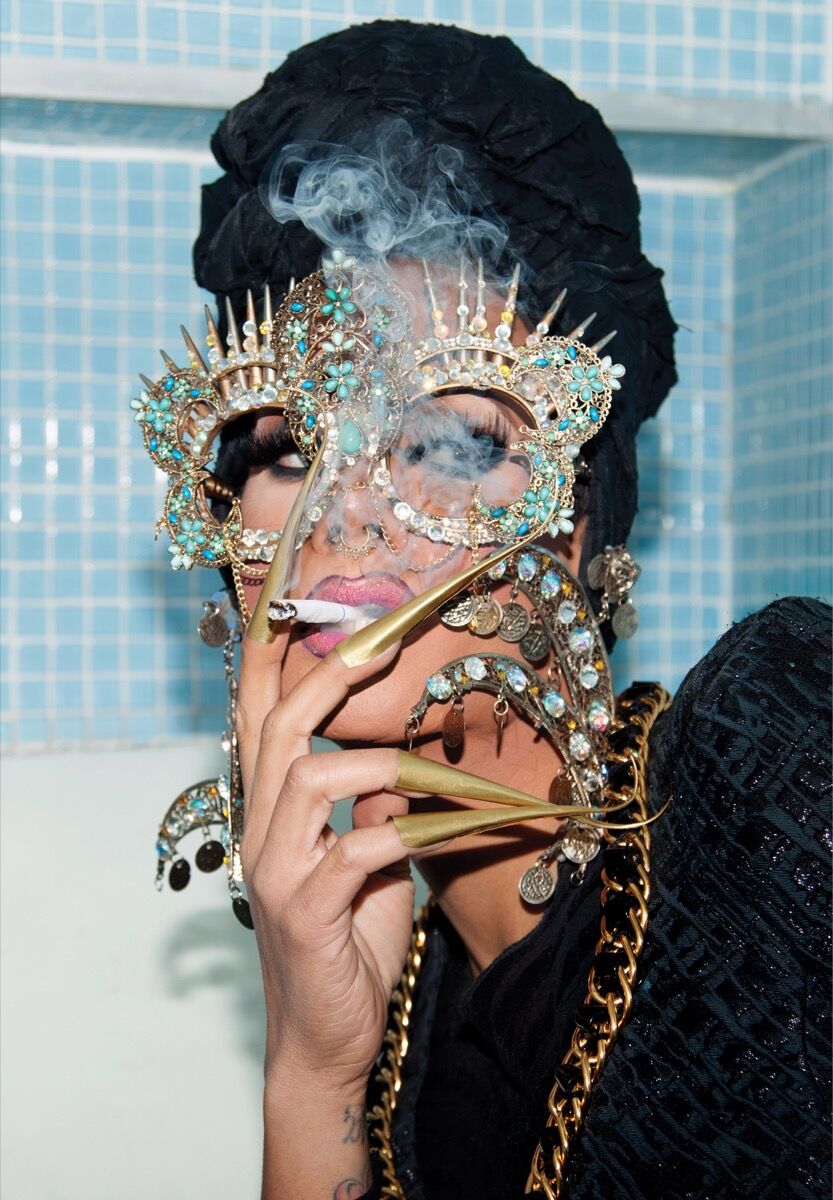 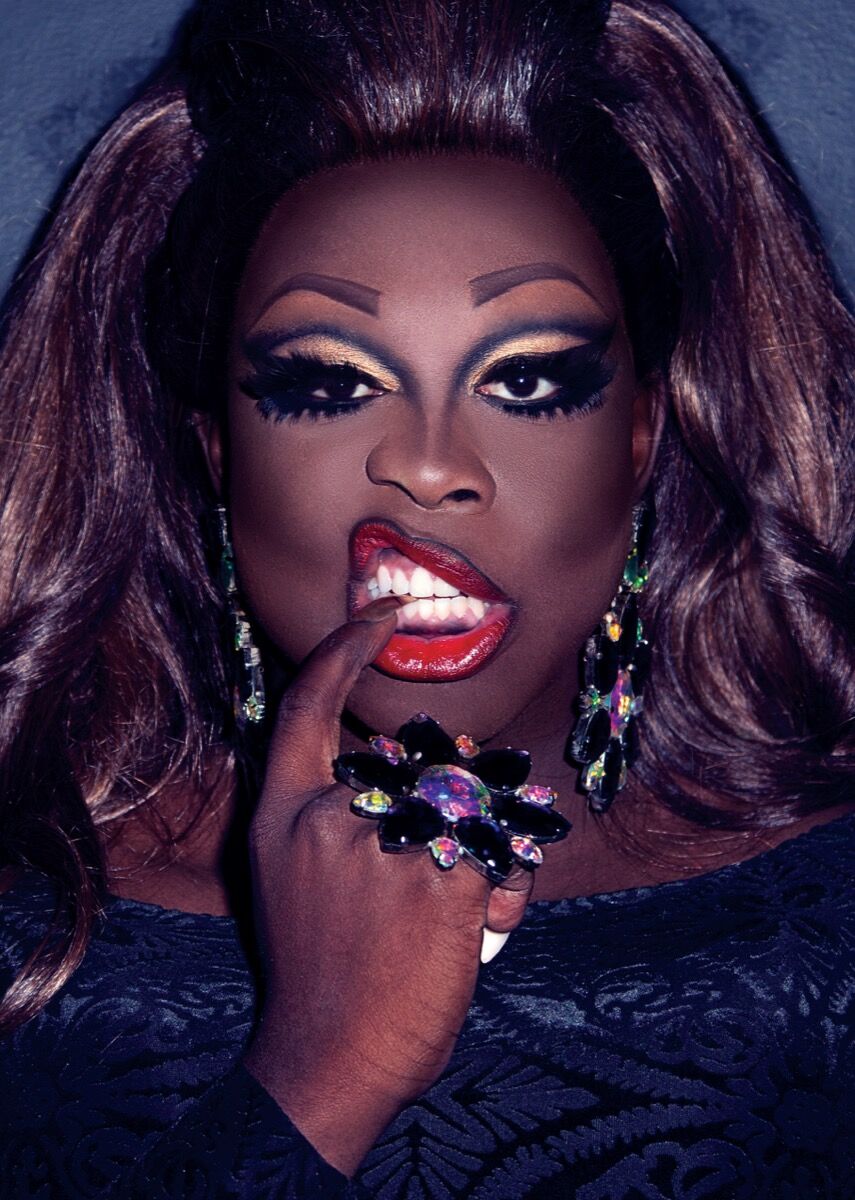 Advertisement
All of the performers and artists in Bailey’s images are captured under the bright white of Bailey’s flash—“stripped down,” as he put it—so that the moments and the people can speak for themselves. His new book, Alright Darling? (2018), compiles that work, a who’s-who of some of the queer world’s most extravagant figures: reality television stars, international club kids, legends of drag, and promising newcomers; in short, artists that are like catnip to an eager lens. “I don’t necessarily do what I think is drag photography,” Bailey explained. “I just happen to like working with extravagant people.”
There is something to be said about his leap from self-publishing to working with a publishing house. For Bailey, it felt like his passion project turned into a bona-fide book almost overnight, in parallel with drag’s quick ascent in pop culture. Many of the performers in the book have massive loyal followings accrued through stints on Drag Race, their social media accounts, or decades-long commitments to the local scenes of their home cities. 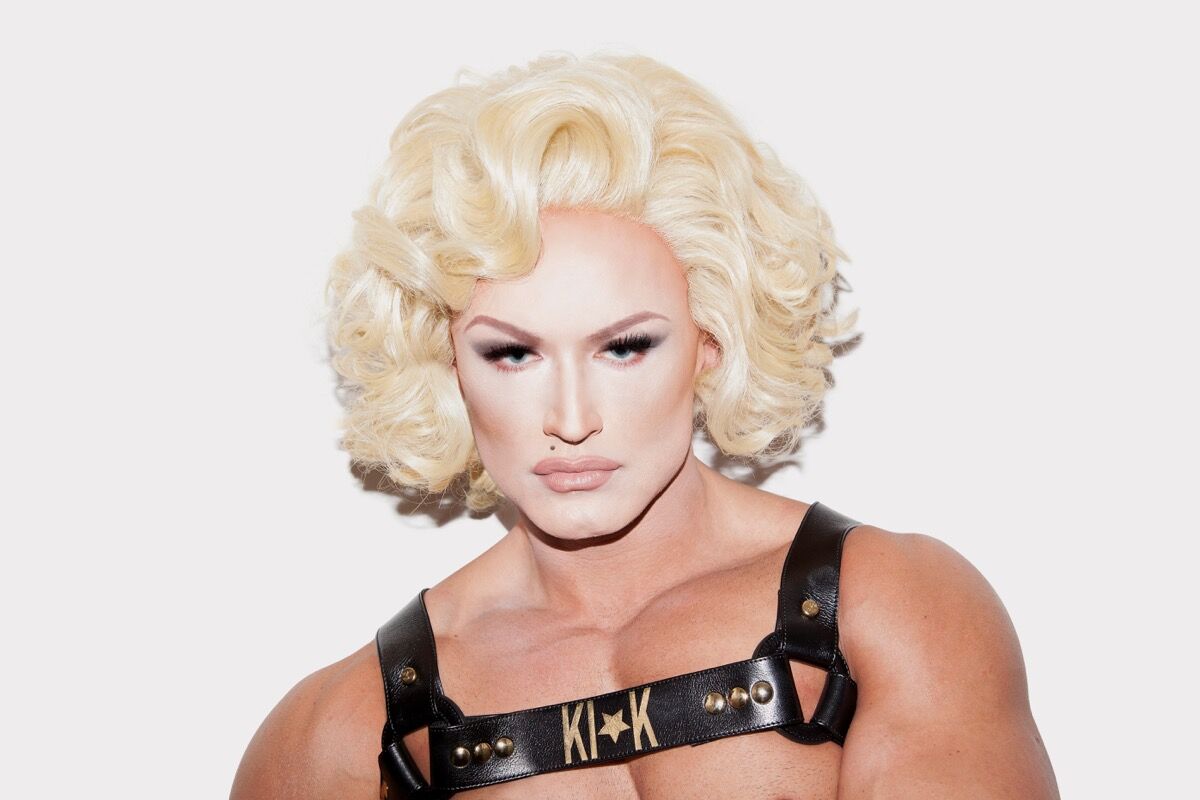 Bailey is part of a new generation of photographers who devote the bulk of their practices to capturing drag. Magnus Hastings has photographed so many queens that he is the “unofficial-official” drag photographer. Gregory Kramer shoots elegant black-and-white portraits against seamless backdrops.
Linda Simpson
is a drag comedian who, in 5,000 pictures, captured just a slice of New York’s drag scene in the 1990s. But Bailey’s pictures are raw snapshots of pop culture. What’s more, his behind-the-scenes shots seem to satisfy the public’s curiosity for what happens when drag performers aren’t onstage, beyond what goes into the dramatic makeup-and-wig transformations. “I get to go to places that [fans] don’t,” he noted of his access.
A drag queen, a photographer, and a pop star walk into a restroom. Though that may sound like the opening line of a raunchy joke, it was the setting for one of Bailey’s images. The drag queen’s name is Raja; Bailey is the photographer; and “the surreal bit for me,” Bailey explained, is that “Adam Lambert was there.” The trio was at the historic nerve center of queer nightlife, a club in London’s Camden district called the Black Cap, before it closed in 2015. As Bailey recalled, following a bomb scare, the trio was locked in the dressing room as a precaution. The dressing room led to the restroom, which led to a fire escape. Raja sat in the men’s bathroom, smoking; click, Bailey took a photo.
“Obviously you know nothing about [the backstory] from looking at the image,” Bailey said. In the picture, Raja wears a decadently ornamented pair of glasses that obscures her face. Her fingers are dressed in brass dance nails, and they fan across her face, holding a cigarette. But the picture wouldn’t have happened without the strange sequence of events leading up to it. 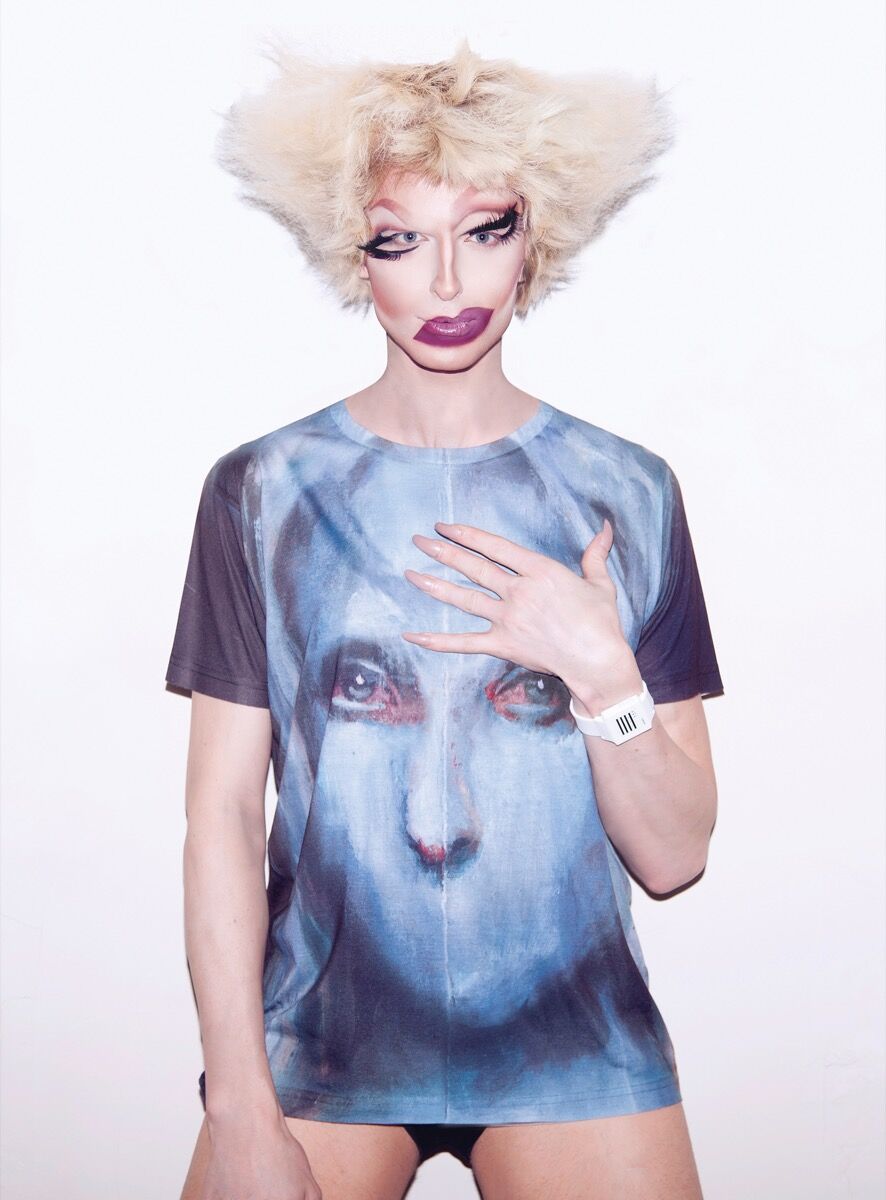 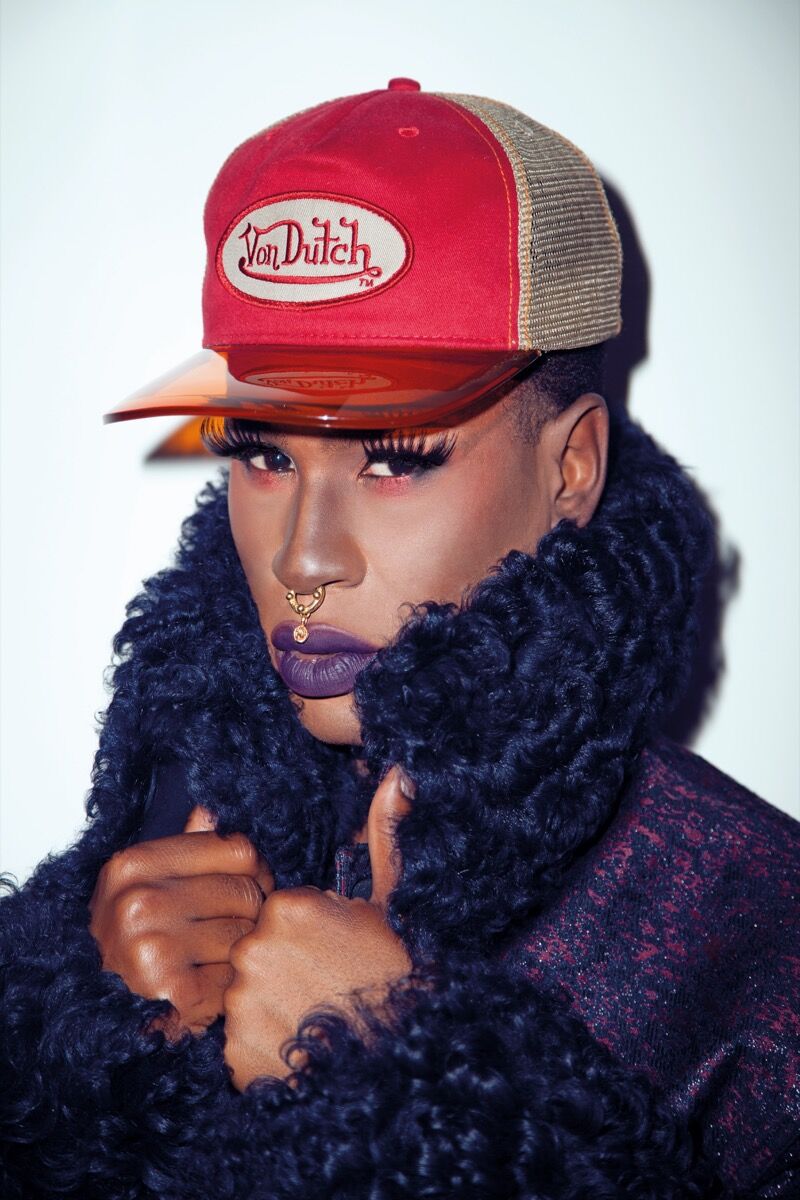 “I think that it’s very necessary for pop culture and subcultures to be documented,” Bailey said, “because windows and doors open and they close again.” Drag is one of those subcultures that experiences cyclical waves of visibility, and photography has a way to render subjects more accessible. Most people didn’t go the legendary Harlem balls or the Pansy Craze of the 1930s—it’s through pictures that moments like those leave a more lasting mark on our culture. The influence of the club kids of the 1990s and the stars of the Hollywood Golden Age can be seen in today’s drag because those earlier photos are sources of inspiration. Bailey realized that “it’s all a big cycle.”
Bailey himself remembers being a teenager and looking at
David LaChapelle
’s portraits of Amanda Lepore, muse to LaChapelle and a living doll of New York nightlife. He still recalls that sense of discovery, flipping through a magazine to see photographs of Lepore, her face sculpted by fillers, exuding glamour. She performed debaucherous tasks in the images, from snorting diamonds to posing naked with a watermelon between her legs. He reflected: “It opened my mind up to see a side of life that was never shown to me before.”
Michelle Santiago Cortés
Related Stories