This Photographer Is Challenging You to See Race Differently 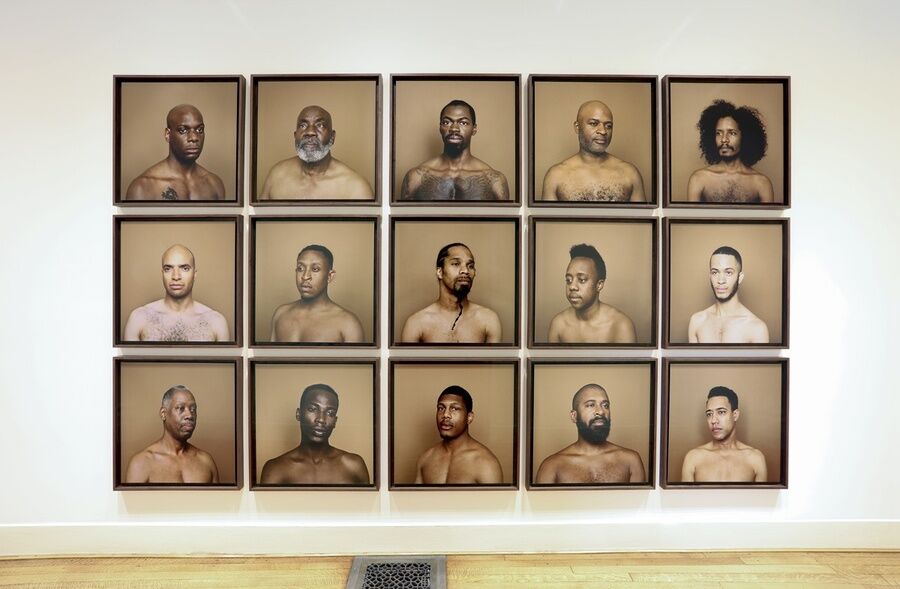 It was the first time that
Erica Deeman
, then a fine art portraiture student at the San Francisco Academy of Art, had invited a fellow black woman into her studio for a shoot. Fiddling with the lights, she flicked off the front lamp, creating a soft silhouette of her subject with the gentlest glow creeping around the edges of her face.
“It wasn’t the photo I intended to make, but it just spoke to me,” says Deeman. “And intuitively, I knew it was something about women from the African diaspora.”
Deeman went on to make “Silhouettes,” a series of 30 back-lit portraits of black women, which has proved so resonant that it’s carried her from unknown photography student to burgeoning talent coveted by collectors.
After practicing photography for little more than five years, Deeman opened her first solo show at the Berkeley Art Museum and Pacific Film Archive at the beginning of March, and another solo at the esteemed Anthony Meier Fine Arts near the end of the month.
In the hyper-saturated age of the selfie, her success is a testament to the enduring ability of traditional portraiture to speak to the most ineffable aspects of humanity—and, in Deeman’s case, subvert insidious assumptions about race. 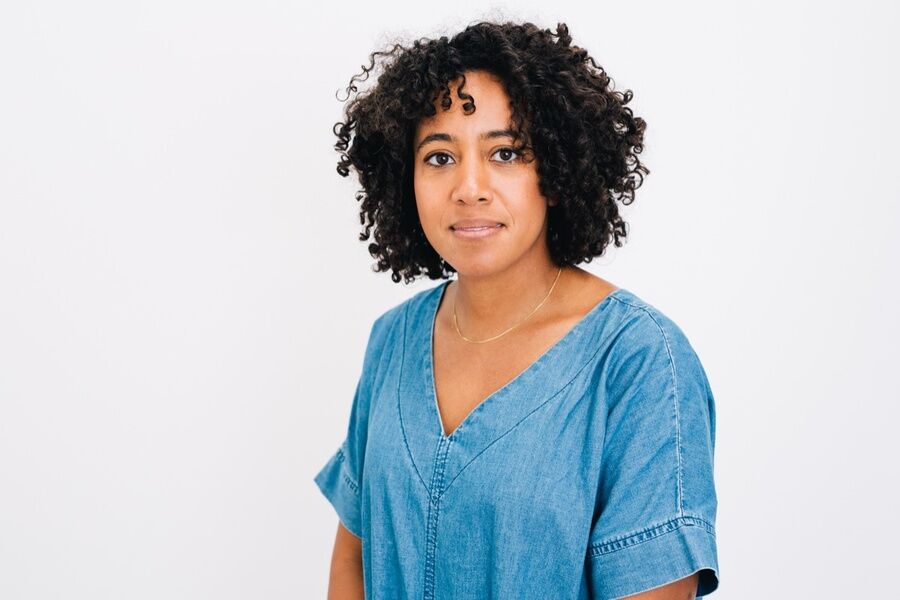 Portrait of Erica Deeman by Anastasiia Sapon. Courtesy of the artist and Anthony Meier Fine Arts.

Deeman’s story unfolds like an artistic fairytale. In her mid-thirties, she was working as an account executive at an advertising firm in London, until one day she woke up and realized that she needed more. “I was deeply unhappy with what I was producing and the impact that I was having,” she says.
She quit her job and traveled the world for a year. While abroad, she fell madly in love with an American woman, and the two eventually moved to San Francisco. Because Deeman couldn’t work without a visa, she decided to go to school. And because she had enjoyed taking photos while traveling, she chose to study photography—specifically portraiture.
“I think this idea of reading the face, the narrative that someone makes up within maybe three seconds of looking at you, that really fascinates me,” says Deeman. “And I think moving to the States has made me re-examine how I am perceived, and who I am within this country.”
In the U.S., Deeman says, she felt unexpectedly robbed of her individuality, as if people expected her to be a certain way simply because she was a black woman. “I feel like part of living here is that I’m not quite seen—there’s something else that comes before that.”
She set out to interrogate the conclusions that people often draw before they know anything about a person—with a particular focus on women of African ancestry. That led her to study physiognomy, the pseudo-science that 17th-century doctors would employ to create correlations between people’s facial features and their intellect and abilities.
(This methodology has helped to shape the foundations of racial profiling, as Deeman points out.)
Composed with intended allusions to those archaic anthropological diagrams, Deeman’s silhouettes anticipate a white gaze, invoking the limited nuance with which black women are often seen by withholding the details of her subjects’ features and staging each portrait in the same profile format. 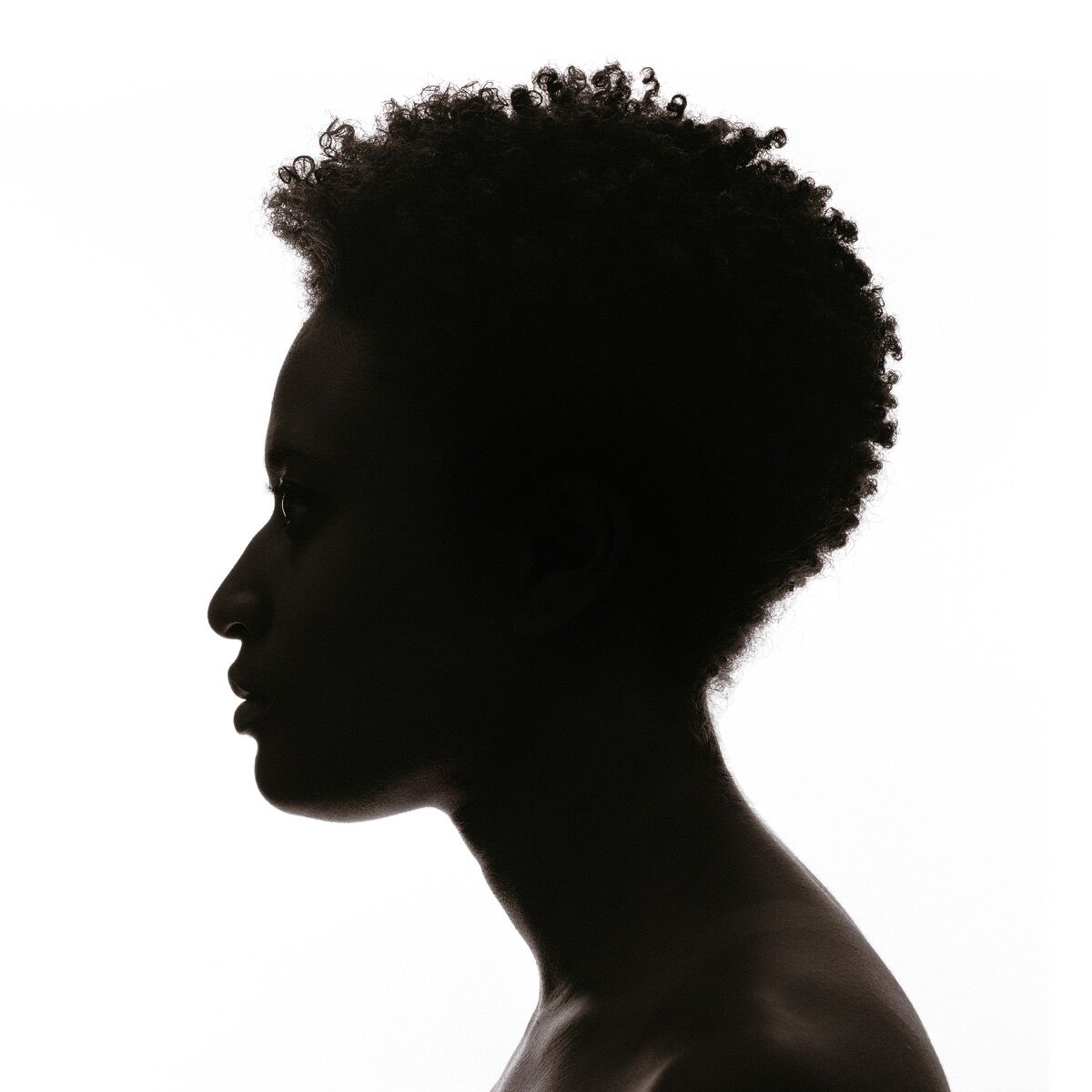 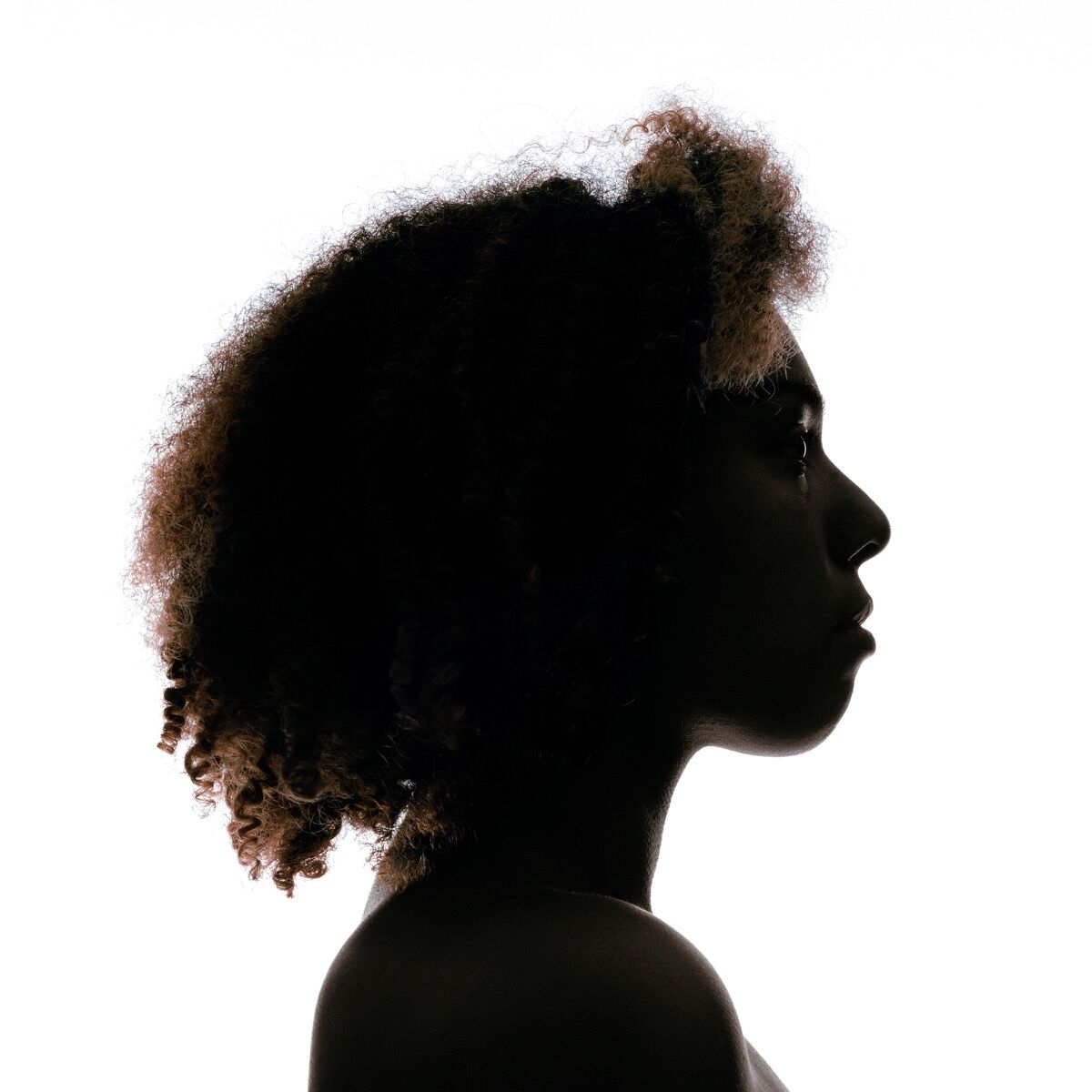 Advertisement
But the portraits also subvert these stereotypes by revealing a varied gradient of browns at the illuminated edges of each face, suggesting complex human subjects shrouded in loaded assumptions of blackness. The photos sometimes recall
Kara Walker
cut-outs come-to-life, and they similarly walk a fine line between pastiche and critique.
“I think people see people of the same race as essentially the same,” says Deeman. “So, there was a tension that I could cause by creating an environment that could be perceived as the same if you weren’t paying attention.”
Deeman presented the series as a portfolio project while in school in 2014. Soon after graduating, she began volunteering at San Francisco’s premier photo gallery, Pier 24. She happened to have her portfolio with her one day when head curator Christopher McCall asked if he could see her work. Impressed by the images—which had been taken digitally—he urged Deeman to reshoot the entire series on film so that it could be blown up.
She bought a used Hasselblad on Craigslist and reshot all of the portraits. Then, she bought a valuable printing coupon from a friend for $20 and used it to enlarge a few of her photos.
Deeman showed the images to McCall, who left them out in the curatorial room. That’s where Andy and Mary Pilara—the founders of Pier 24—came across them. They ultimately financed the rest of Deeman’s prints and collected 10 through their foundation.
“They have taken me under their wing and taught me how to fly,” says Deeman of Pier 24.
In late 2015, about a year after Deeman had first shown McCall her portfolio, he called her into his office. “I was like, ‘Oh fuck, am I being rude to somebody?” she recalls. In fact, he wanted to put her work in “Collected,” an 8-month-long exhibition that would open in May 2016 and also feature the likes of
Dorothea Lange
,
Robert Frank
,
Richard Avedon
,
Lee Friedlander
, and
Walker Evans
.
Soon enough, the Berkeley Art Museum was planning to show all 30 of the portraits in Deeman’s “Silhouettes” series—the first time she would ever see them all hung in the same room. Meanwhile, she began “Brown,” the project that would eventually become her show at Anthony Meier.
“That’s my Cinderella story,” says Deeman. 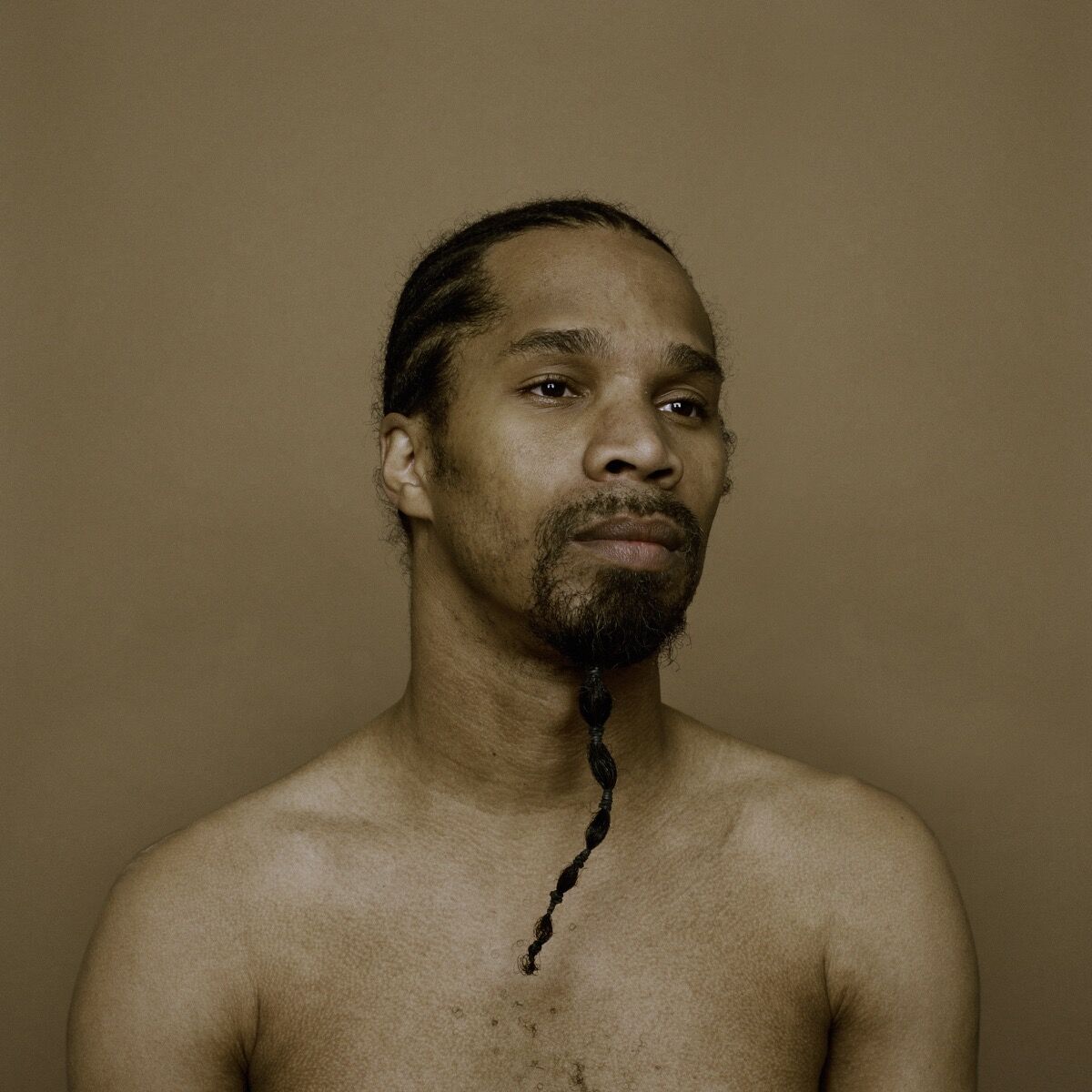 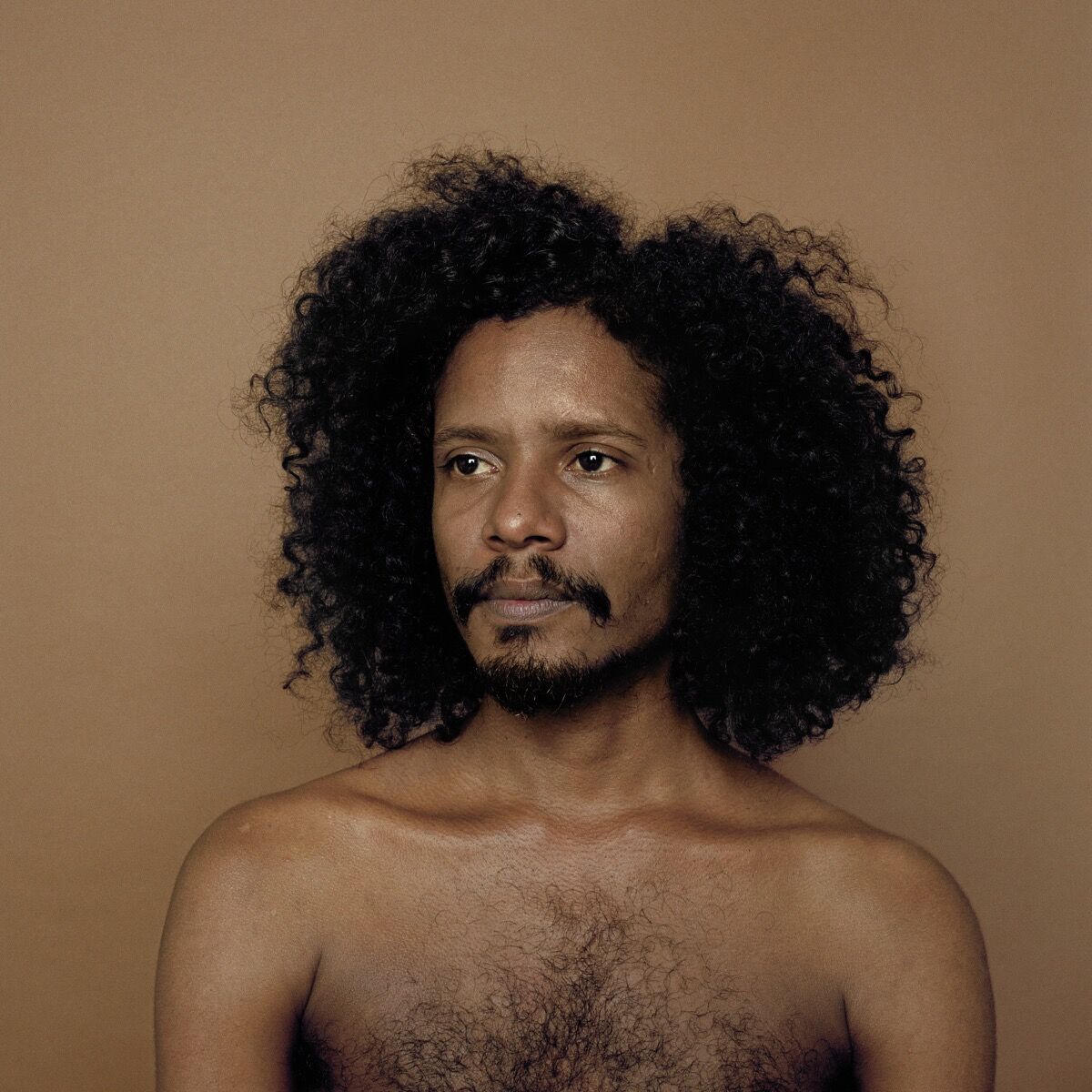 But the integrity of “Brown” is a rebuttal to anyone who might attempt to frame Deeman’s initial success as a mere stroke of luck. The series expands her sharp investigation of race and representation to the black male subject, this time presenting her characters in bright lighting and positioned in front of a brown background that Deeman chose to mimic the tone of her own skin.
The images afford their subjects a rare sense of softness and vulnerability, while also highlighting the subtle variations in their skin tones. Presented alongside each other, the idiosyncratic faces preclude any presuppositions that the subjects could be alike.
Since opening, both her BAMPFA and Anthony Meier shows have received applause from numerous outlets and critics, but Deeman remains determinedly humble. “The greatest thing about the whole journey is not recognition,” she says. “It’s just having the work out there.”
Sarah Burke
Related Stories