This Photographer Envisioned a Fierce Army of Girls, Forging Their Own Paths

Throughout her career, photographer
Justine Kurland
has trained her lens on divergent subjects both documentary and staged: young girls, nude mothers, men at auto body shops. Across her work, there’s a muted sense of romance, of both gritty desire and desperation. Kurland relishes gravel, fences, dead animals, cell phone towers, broken windows, and car engines. Now a mother herself, she’s ultimately outgrown the label that once reductively described her young, female cohort who captured even younger women on rolls of film: “girl photographers.”
Just over 20 years ago, Kurland began photographing young women both in tough, urban settings and more idyllic, secluded locales. The subjects in this series, simply titled “Girls,” rest against one another outside a bleak Toys ‘R’ Us, sit beneath an underpass, roast an animal over an open flame, and gather along rivers or in wooded clearings. They torture boys, eat ice cream, and play cards. The 69 career-launching images, made between 1997 and 2002, are now on view all together for the first time (as vintage prints)at Mitchell Innes & Nash—they’re only for sale as a complete set, transforming the individual images into a larger event. 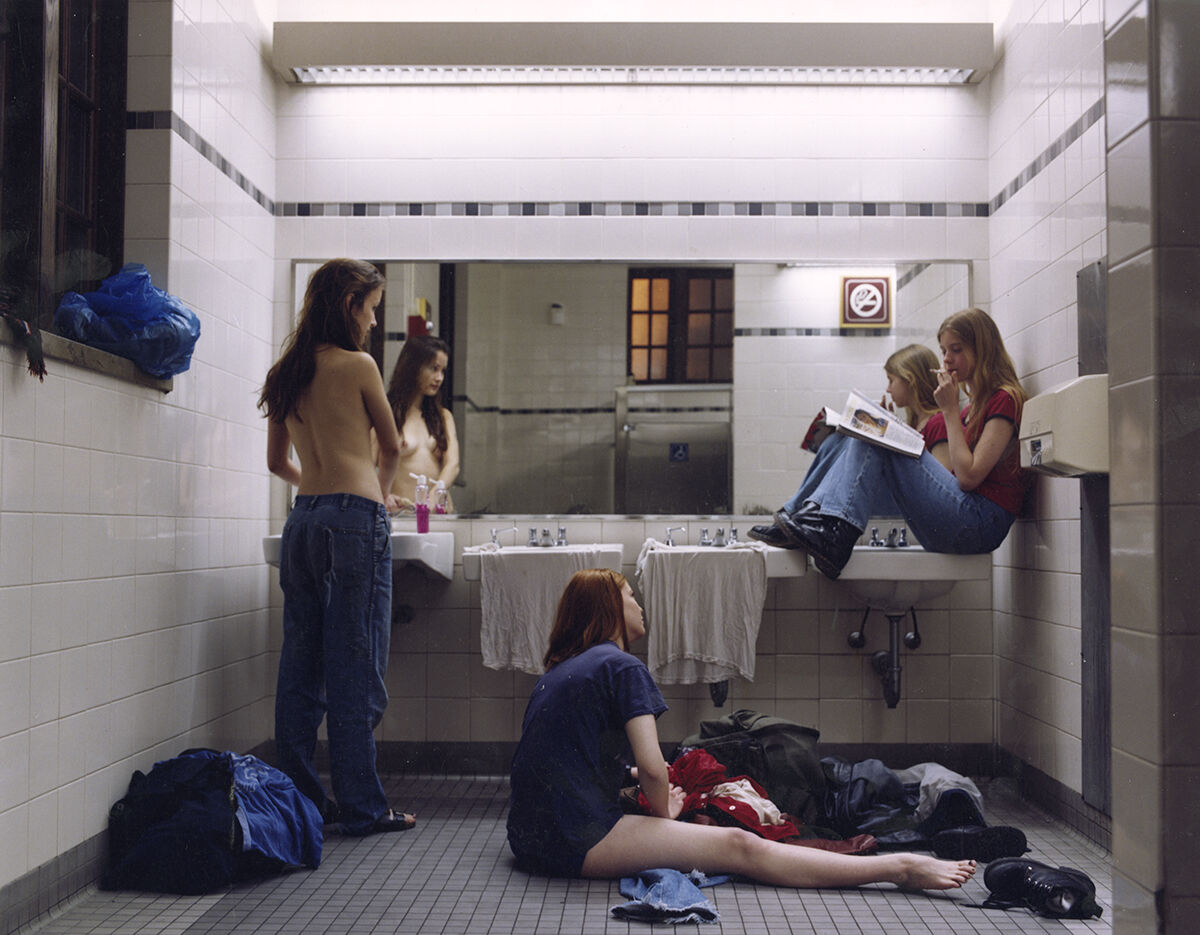 Kurland began the series when she was a graduate student at Yale, where she studied under
Gregory Crewdson
and
Laurie Simmons
. Her relationship with Simmons extended beyond the classroom: “I remember how thrilling it was to share cigarettes with her on the back staircase, to hear her talk about her work and break the no-smoking rule together,” Kurland tells Artsy via email. “Her attention repaired some of the confidence that had broken during my time in the program.”
Simmons also introduced her to her babysitter, Lily. Kurland began photographing Lily and her friends in staged scenarios around what she calls “interstitial sections of Brooklyn.” Kurland gave them minimal direction, though her shots suggest that they’re runaways, both fierce and independent. Of all the stereotypical roles a teenage girl could occupy, Kurland believed that this was the most hopeful—“there’s a potential to find a world in which they belong,” she explains.
In 1999, a year after Kurland graduated from Yale, Crewdson included her work in a group show at Van Doren Waxter, entitled “Another Girl, Another Planet.” All but one of the 12 exhibited artists were women, and most of the included work featured adolescent girls, simultaneously tough and vulnerable. Along with a few of her co-exhibitors, including
Katy Grannan
,
Dana Hoey
, and
Malerie Marder
(all fellow Yale grads), Kurland earned a reputation as a “girl photographer.” 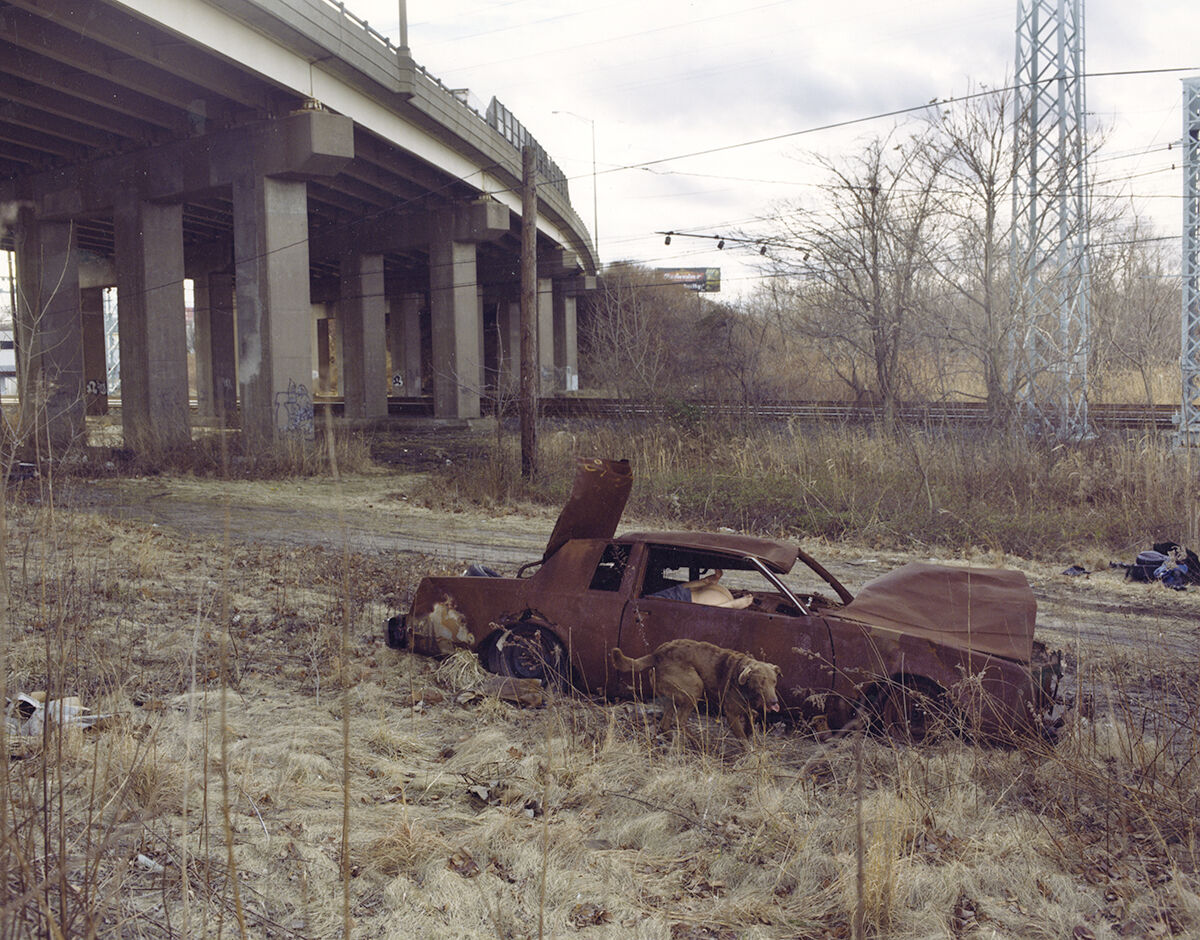 Advertisement
In one of the “Girls” photographs, Making Happy (1998), Kurland captures a rusty, beat-up car parked near barren trees and a graffiti-laden underpass. A Budweiser billboard looms in the background, while trash and leaves litter the nearby brush. Upon closer inspection, we see two entangled bodies in the back of the vehicle, ostensibly in the middle of “making happy.”
Indeed, a steady undercurrent of sex runs throughout the entire series. Shortly after completing the series, Kurland began dating women as well as men. “For the last three years I’ve been madly in love with a woman I feel lucky to call my partner,” she tells Artsy. “Looking back at the ‘Girl’ pictures it’s hard not to read the homoerotic subtext of these pictures as my optical unconscious.”
Kurland hopped continents in 2001, photographing girls again, but this time, across the New Zealand landscape. The settings there were more lush, the girls often clothed in school uniforms. She returned to the United States and spent the next 12 years on the road, traveling in a green Chevy Astro minivan. Her models were naked women or members of communes. The resulting images often depicted strange feminist utopias. 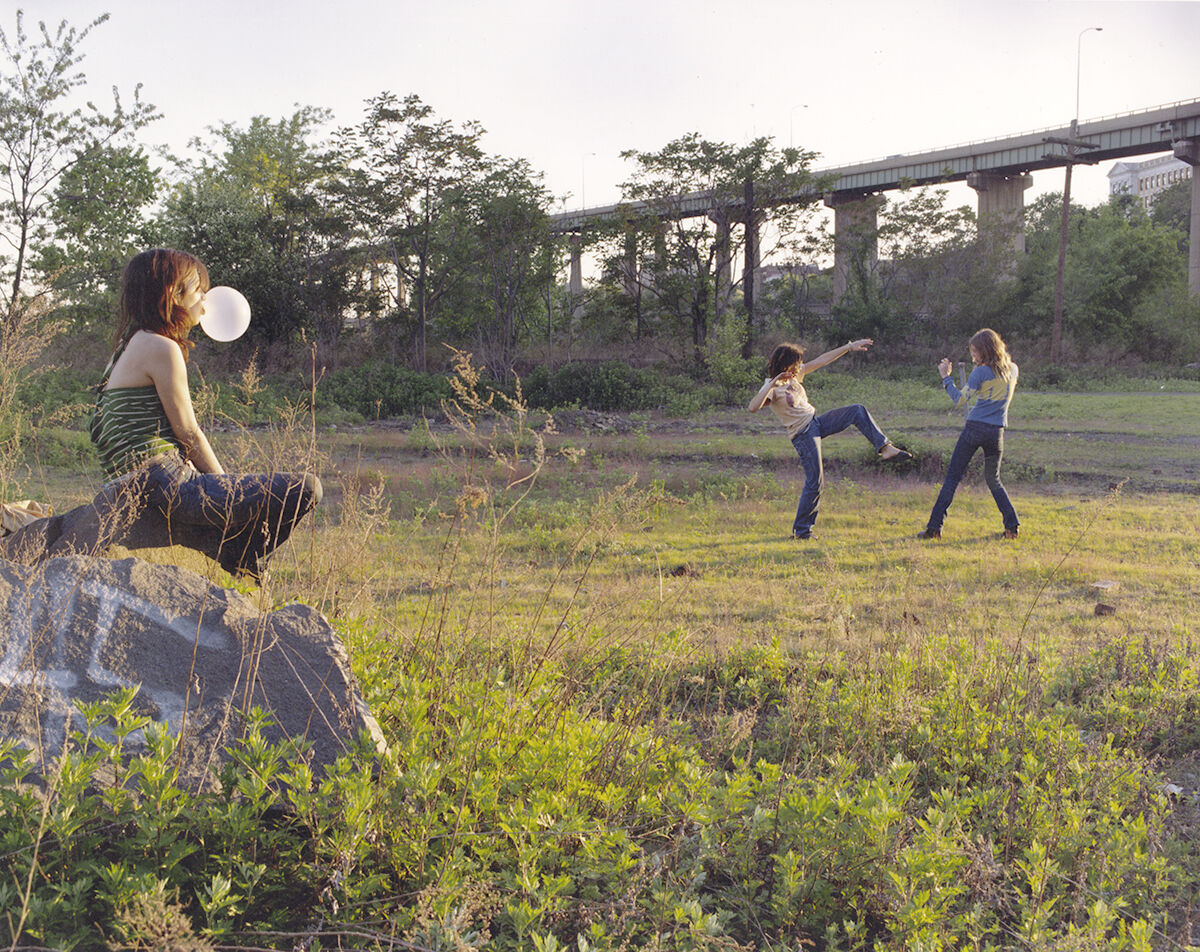 Then, in 2004, Kurland gave birth to a son. She named him Casper, inspired by the painter
Caspar David Friedrich
, who rendered one of art history’s most famous wanderers, staring out at the fog. Reluctant to abandon her itinerant life, Kurland took her son on the road; sometimes, he even became her subject matter. She captured him in their van, lying on a picnic table, climbing a dusty ledge. Kurland recalls him telling her: “Mama, you’re a photographer so you can go on road trips.” Indeed, her work required a certain bohemian vagrancy, constant movement in order to capture—paradoxically—“stills.” While the photographer’s themes evolved beyond adventure-seeking youth, a certain wildness was still pervasive.
As Kurland adjusted to life as a new mother, she turned her lens on women undergoing the same life-altering experiences. In her series “Mama Baby” (2004–07), pregnant women and young mothers cavort nude in idyllic landscapes: on a misty beach, in a sunlit forest, in snowy mountains.
If Kurland’s van had been integral to her art practice, her son developed an affection for another kind of vehicle: trains. She recalls how, at two years old, his obsession led the pair to visit railroad museums and trespass on railroad property. Her series “This Train is Bound for Glory” (2007–11) captured boxcars and the vagrants who hitched rides on them across the open American landscape. Many of the photographs were shot from a long range, making them more about the scenic environment than the locomotives themselves.
6 Images
View Slideshow 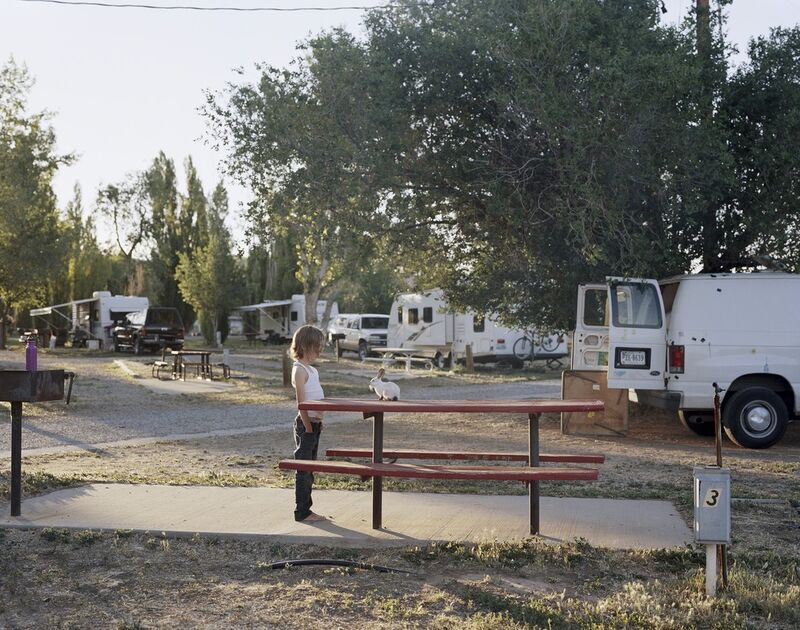 Beginning in 2011, Kurland zoomed in. Her next series, “Sincere Auto Care” (2011–15), focused on cars and the mechanics who fixed them. Many of these shots offer granular detail. She highlights the musculature and tattoos that define a man’s body, or the precise inner workings of an engine. After all those years depicting women, Kurland’s son, in part, inspired her to turn her artistic vision toward American masculinity. She even titled one of these photographs What Casper Might Look Like if He Grew Up to be a Junkie in Tacoma (2013). Her concerns about children’s opportunities and expectations had become deeply personal.
An era, however, was ending. Around 2010, Kurland’s van was totalled. She enrolled Casper in elementary school. Even if her work isn’t autobiographical in the traditional sense, the story she’s written for herself has become a dreamy, though fraught, adventure tale. It ends—as many such narratives do—in her own backyard. Within the past few years, Kurland has turned toward her past. Now, she’s shooting around her hometown of Fulton, New York. “The town’s economic depression underscored a psychological depression I felt growing up there,” she says. “In many ways, my road trips were about putting as much distance between Fulton and myself as I could. I decided to go back to see what I was running from.”
In recent work, Kurland returns to more intimate sites, as well. She photographed her mother à la
Gustave Courbet
’s L’Origine du monde; her dead father’s artwork (he was a painter); and a series that involves strap-ons (including a self-portrait that shows her wearing one at an ex’s house). 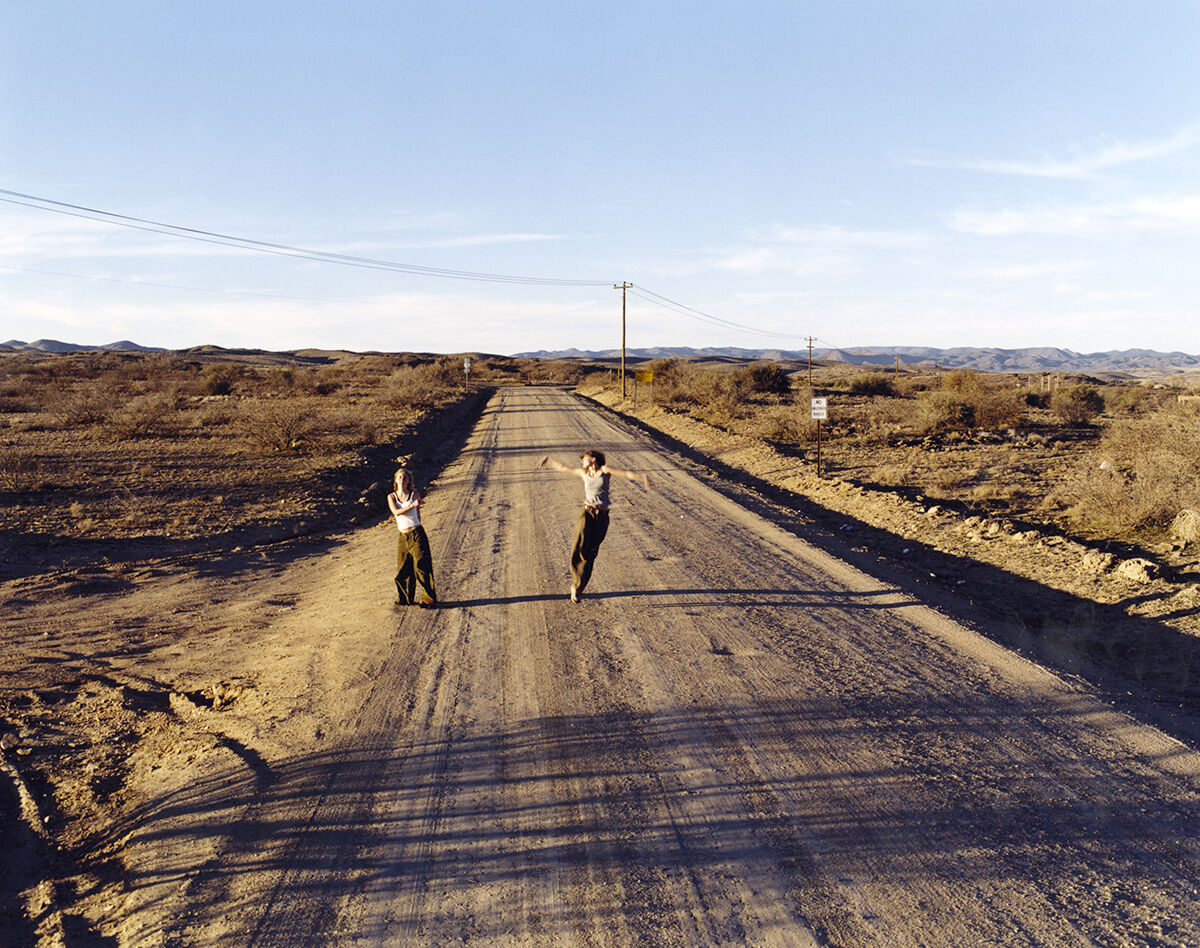 These later pictures meditate on many of the same themes evident, if more quietly, in “Girls”: sexuality; the intersection of mood and place; childhood. The series, though slightly tinged with a late-1990s grunge sensibility, is still haunting. Kurland confides that Lily—whom she photographed decades ago—died 10 years after she took her picture. Kurland found out while she was driving, her son sitting next to her in his carseat. She withholds the particulars of the tragedy, but tells Artsy that “for months afterward I would have panic flashes imagining the horrific last moments of her death. Had she been scared? Had she been in pain? I imagined her fighting to live. Out of pure narcissism I blamed myself for not saving her, that had after all been my mission with these pictures.”
Kurland stresses the importance of revisiting this work in our contemporary political climate. “I pictured a standing army of girls united in solidarity, outside the margins of home or institution, working together to build a community that foregrounded their experience as primary and irrefutable,” she says. “These photographs were a call to action, then as now.”
Alina Cohen
Related Stories

Laurel Nakadate Used Photoshop to Rewrite Her Family’s Past 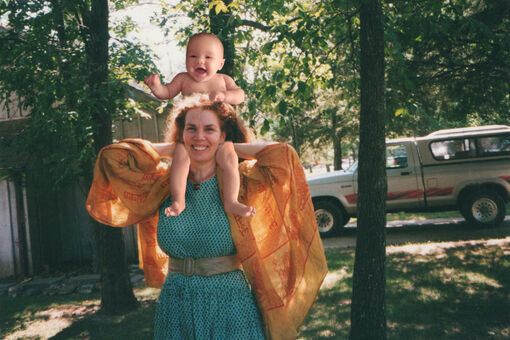