Jesse Rieser Captures American Christmas in All of Its Kitschy Splendor 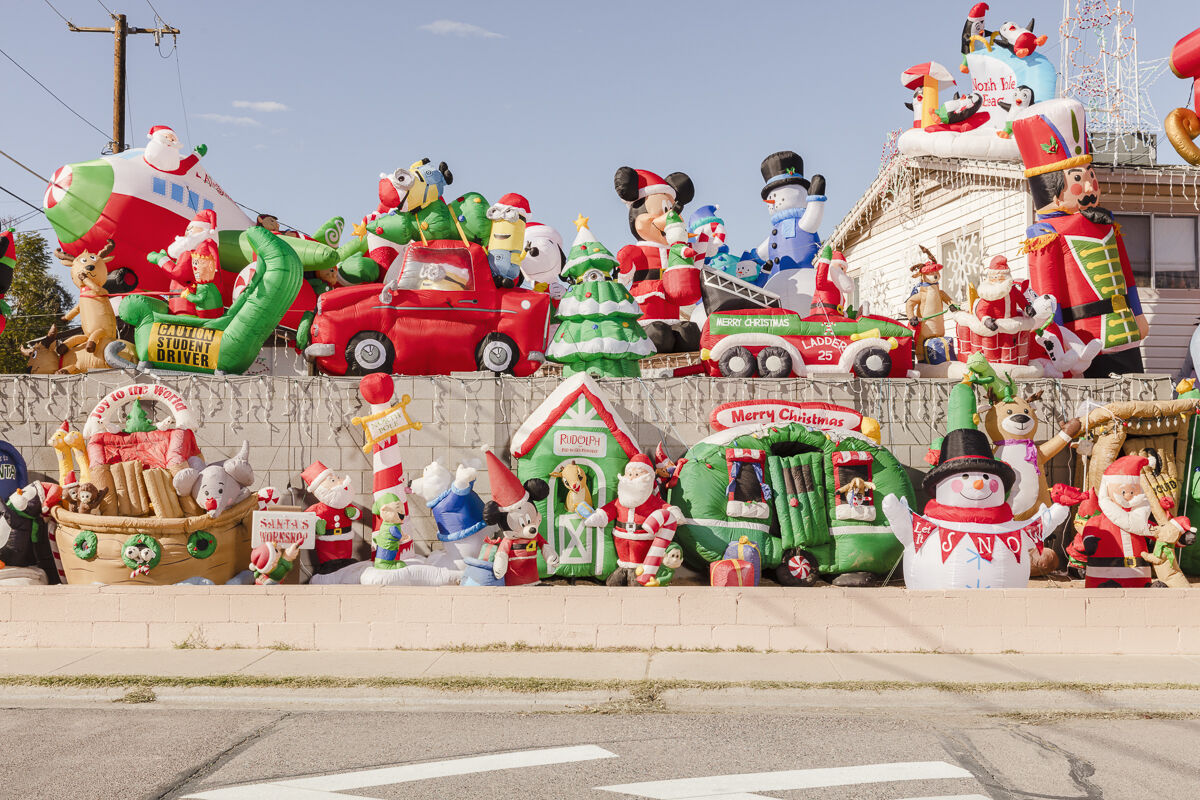 A distinctly American sense of excess pervades Jesse Rieser’s photography series about Christmas in the United States. Rieser captures a sea of bodies dressed in Santa suits; a living room filled with innumerable, glittering baubles; and a home nearly invisible among the inflatable decorations that surround it. Louder! Brighter! More, more, more!
The title of Rieser’s series, “Christmas in America: Happy Birthday, Jesus” (2010–ongoing), offers significant irony. His scenes, though they don’t revere a religious figure, are indeed about celebration. Mostly, the photographs elicit ideas about spectacle. We live in a country that voted a reality television star into office; a similar predilection for pageantry lurks behind intricate costumes and home decor. That’s not to say such exuberance is always a bad thing, however—it can be a force for good when used to unite a neighborhood (or even an estranged family) through holiday cheer.
Rieser, who lives between Los Angeles and Phoenix, began shooting the still-ongoing series in 2010, after his family moved to Phoenix from the Midwest and began celebrating the holiday in a new place. “Emotionally and traditionally, we were in a different type of space,” he told Artsy recently by phone. Out west, Rieser enjoyed the “strange juxtaposition of warmer climates” with “the Charles Dickens, East Coast view of the holiday.” He saw more lights, inflatables, and animatronics, and wanted to capture them with his camera.
A bright, clear aesthetic infuses much of Rieser’s work, even when the topic is less lively than, say, Santa Claus. “I hope people can find a little bit of themselves or their families in these photos, in this humorous, nostalgic way,” he said.
A selection of Rieser’s “Christmas in America” pictures will be on view at Industry City in Brooklyn through Monday, December 24th. (A monograph is also in the works.) Appropriately, Santa himself will visit on the weekends, sitting atop a forklift next to a Christmas tree—more humor-tinged pomp and circumstance, for a society that thrives on it.
Below, Rieser shared with Artsy his accounts of a selection of the photographs. He does not, he said, do any of his own decorating. 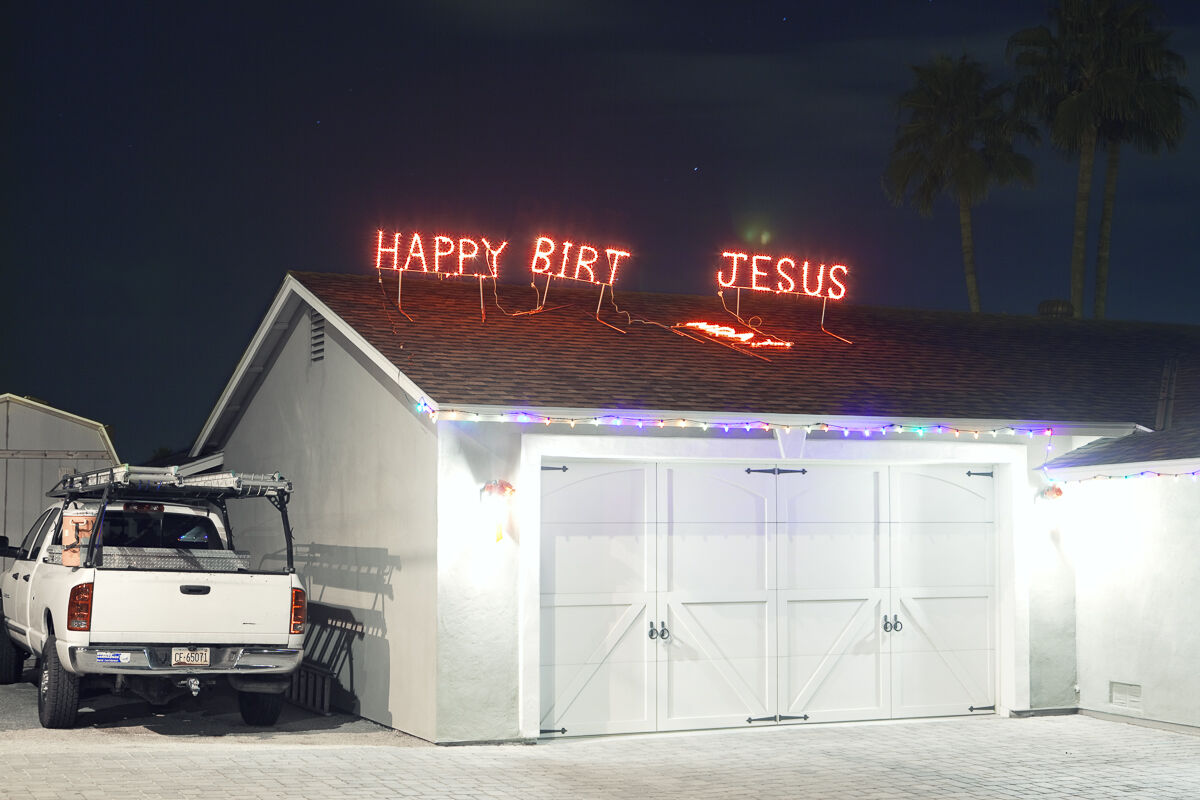 “I took this picture of a north Phoenix home during my first year shooting the series. I still consider it the title image of the project: the subtle break in the well-wishing of Jesus’s birthday. This big storm knocked down part of this sign near where my folks live. I saw it while driving around after a day of shooting. It was after Christmas, almost New Year’s—the holiday had passed. I didn’t meet the homeowners, just got up on a ladder, set up a tripod, and risked a trespassing charge to get the shot.” 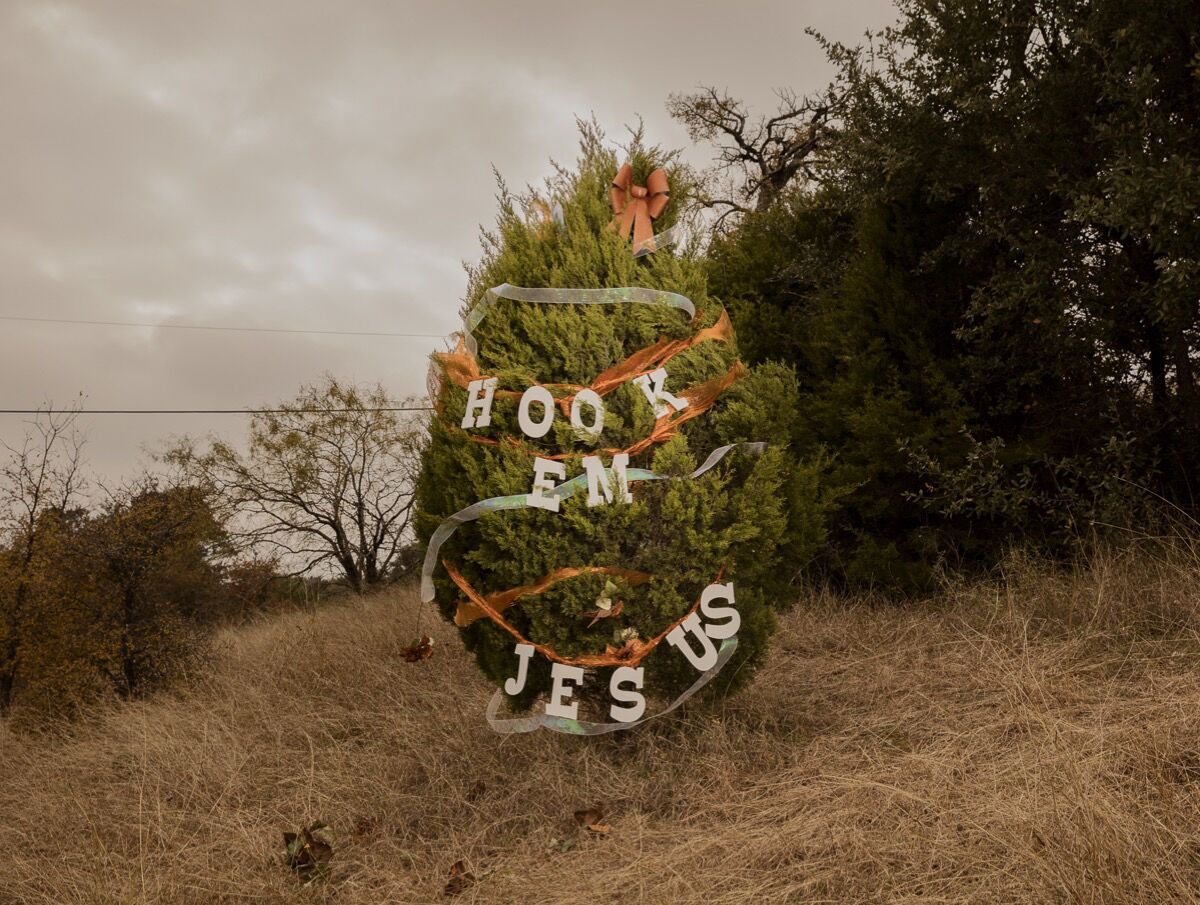 Advertisement
“There’s this highway around Austin, Texas, called Loop 360. People park their cars on the side of the road, run up the hills and embankments, and randomly decorate the trees lining the freeway. You could have a Star Wars tree, and then something like this one. The University of Texas mascot is the Longhorns, and at their football games, they say: ‘Hook ‘Em Horns.’ This felt regionally important.” 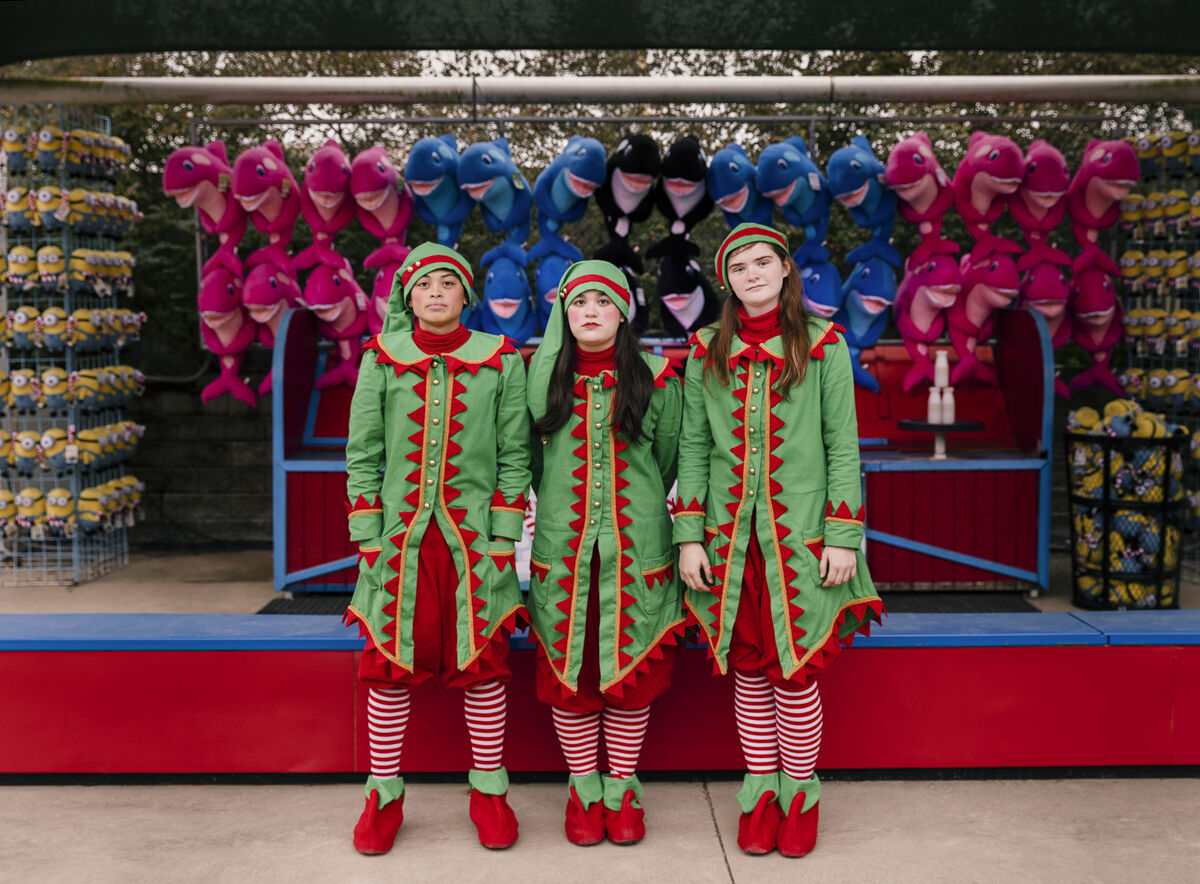 “This image was taken at the San Antonio SeaWorld. I grew up in the Midwest, and I’d always presumed that SeaWorlds were on the coast. There’s something interesting about the idea of a SeaWorld in southern Texas. This level of fabrication and construction leant itself well to the idea of the project; there’s an implied fantasy. What you see is the carnival game area. I had these fair workers in their elf costumes pose in front of all the different-colored Shamu plush dolls that you could win.” 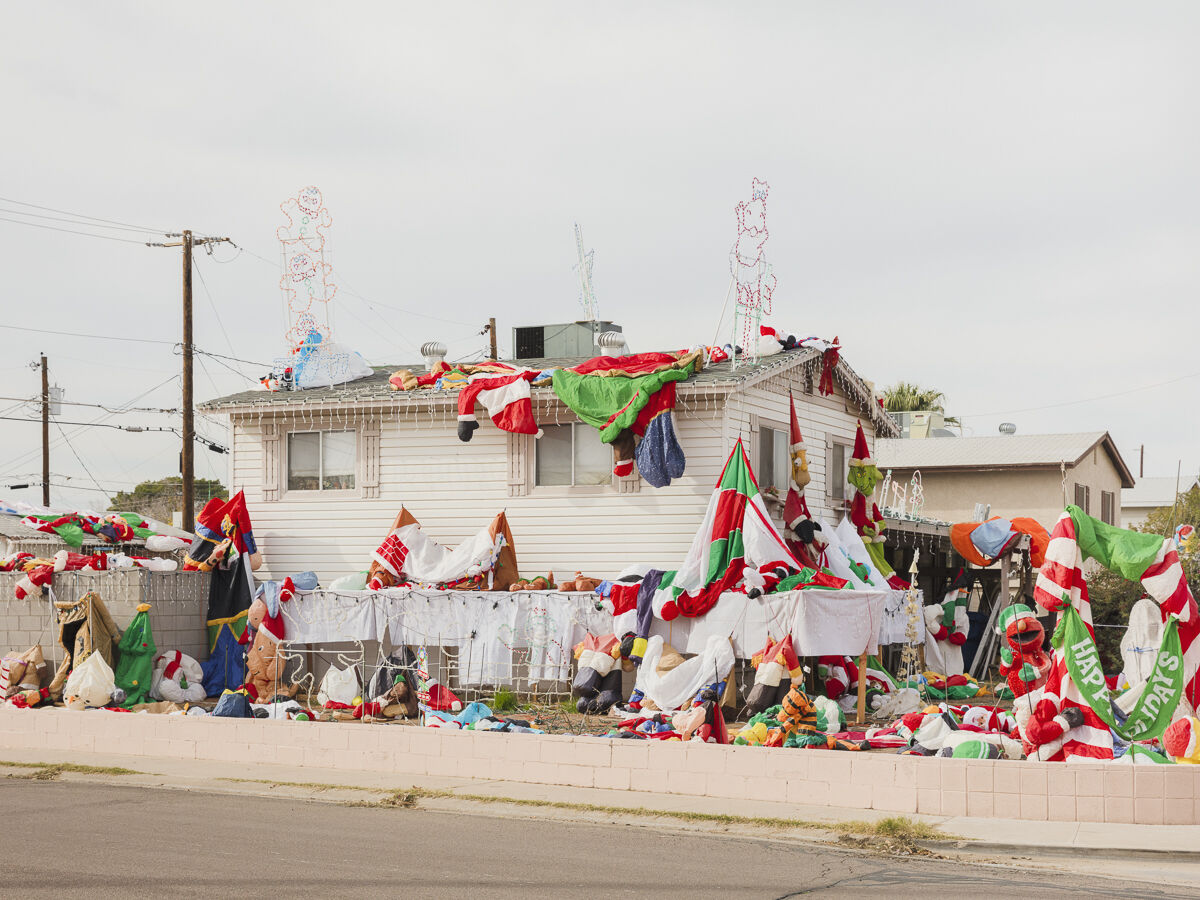 “Tempe, Arizona, has a dry climate, and it’s not super windy during the winter months, which allows residents to put up all these inflatables. There’s something really interesting about watching all these things come to life and then melt back to the ground. Like ‘Christ has risen,’ but with cheap cartoon figures made in China. It’s very surreal. The gentleman who lives in this house worked at a Phoenix Lowe’s and could get all of these inflatables on the cheap. Visitors line their cars up to see these kinds of decorated homes. Sometimes they become de-facto community centers—it’s so spread out here, and this brings people together.” 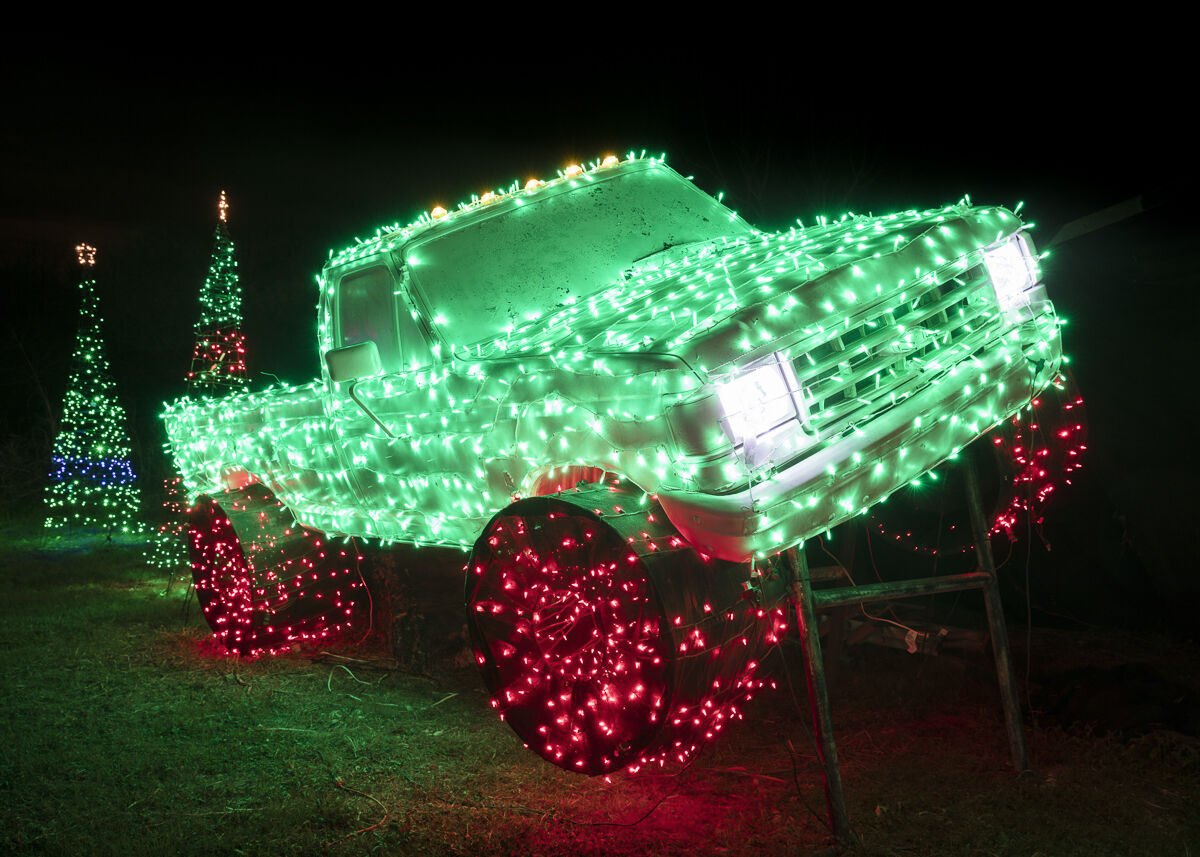 “I came across this on my way from San Antonio to Austin, Texas. It’s in one of those massive drive-thru display set-ups. You show up with a car full of friends, then pay a fee to spend 45 minutes driving around, seeing all these displays. I always look for things with a regional personality. And here’s this old, jacked-up pickup truck. It felt very Texas to me.” 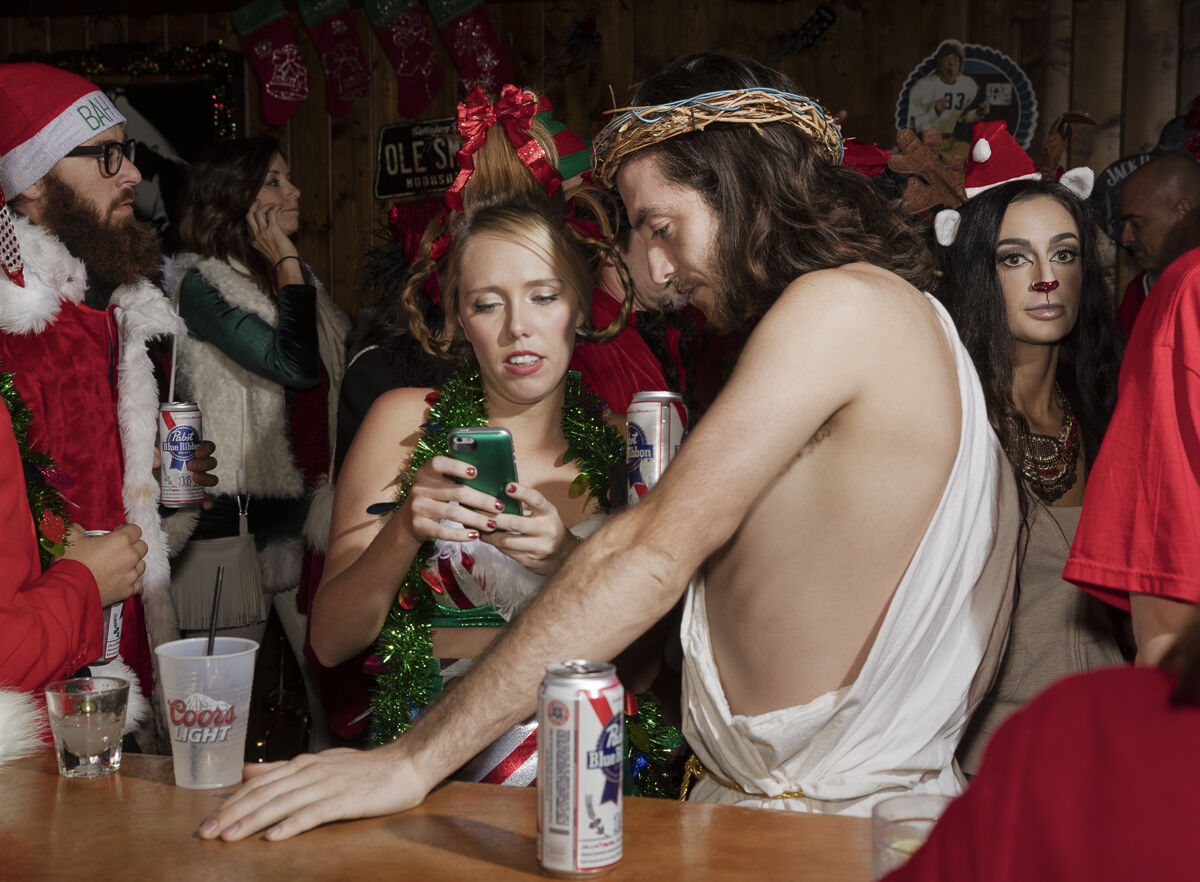 Jesse Rieser, Cindy Lou Who vs. Jesus, Scottsdale, AZ, 2015. Courtesy of the artist.

“This is from an event in Arizona called ‘Santarchy.’ In the evening, there’s a four-hour pub crawl; it’s like Christmas meets Halloween. Here are two people meeting, exchanging numbers: One is Cindy Lou Who and the other is a hipster Jesus. On the right is someone dressed up as one of those OG Snapchat filters that looks like a deer. The whole event culminates in this Santa Rave at a nightclub.” 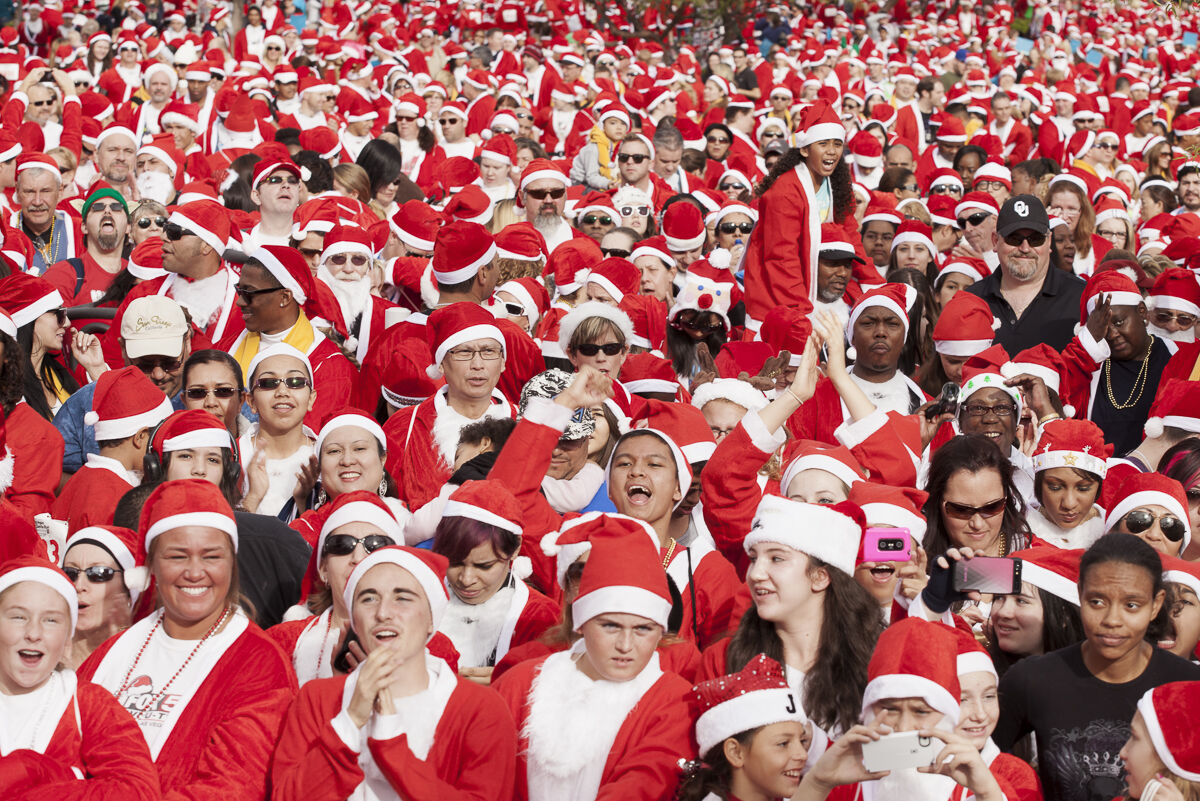 “This is in Las Vegas, at the Great Santa Run. It’s a 5K race that’s a fundraiser for kids with special needs. Everyone gets dressed up as Santa Claus, and they all try to reclaim their title in The Guinness Book of World Records for the greatest amount of Santas ever assembled. There’s live entertainment before the race stars. I believe I took this picture during a performance by this dance troupe called the Jabbawockeez. I was on the stage with them. Shortly after, Robin Leach (from Lifestyles of the Rich and Famous) introduced the mayor. It’s all super weirdo American.” 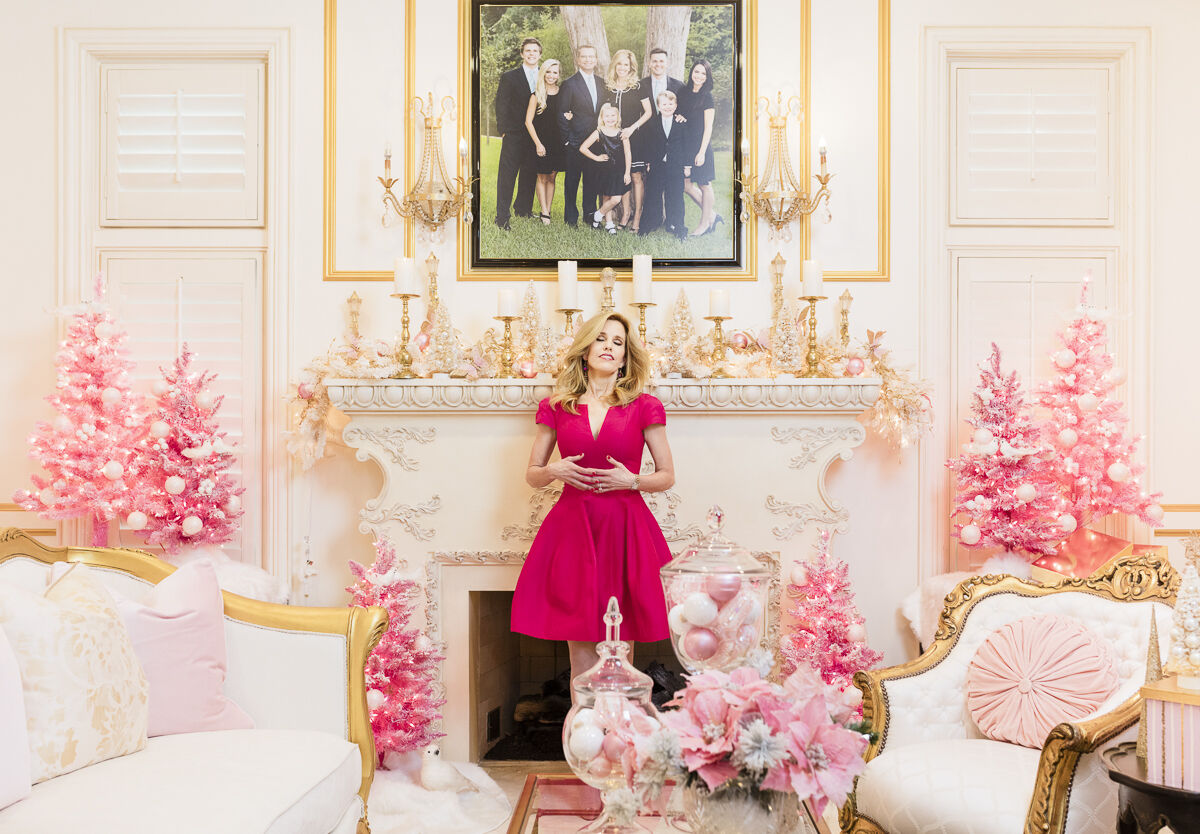 “Texas sometimes feels like a microcosm of the country, because of all these converging regions. I took this picture in Dallas of Jennifer Houghton, who has a successful blog about redecorating her home. Ultimately, I wanted to provide an opulent counterpoint to some of the more DIY, working-class vignettes that you see in the other images.” In another image of the home, a digital picture of her family in a hot tub hung in the room. “They seemed like a really close-knit family,” Rieser said. 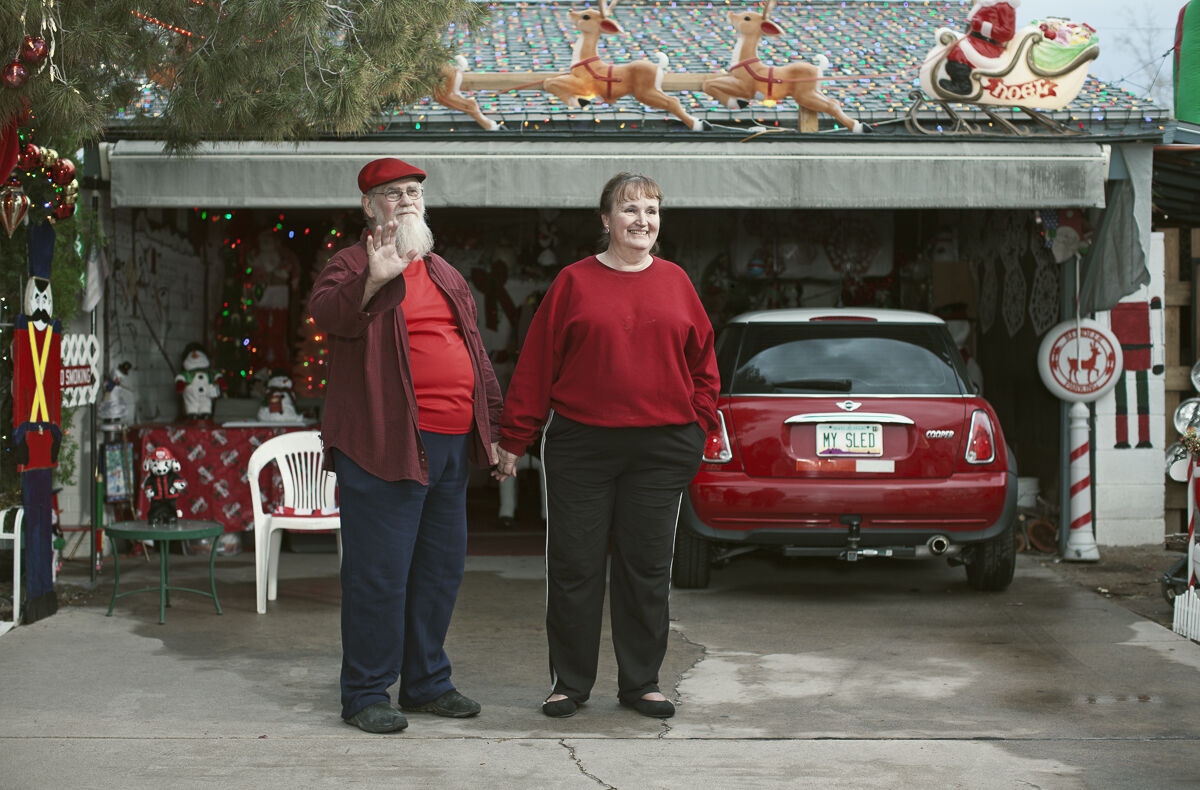 “I think these two embody one of the ideas of the project: There’s a celebratory innocence to them. She used to own a local antiques, treasure-trove kind of place. This is another one of those homes that becomes a kind of community center. People drive by, park, and tour the front yard. They’ll have snacks and maybe hot chocolate. Parents will take their children and share a beer with their neighbors. On certain nights leading up to the holiday, this man would dress in full Santa garb and greet the kids.”
Alina Cohen
Related Stories

A Brief History of the Snow Globe 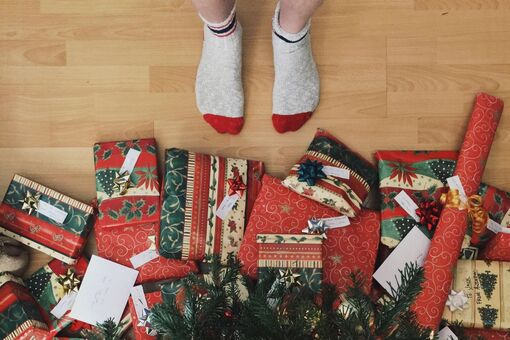 The Little-Known Reason Red and Green are the Colors of Christmas
Abigail Cain
Dec 20, 2017 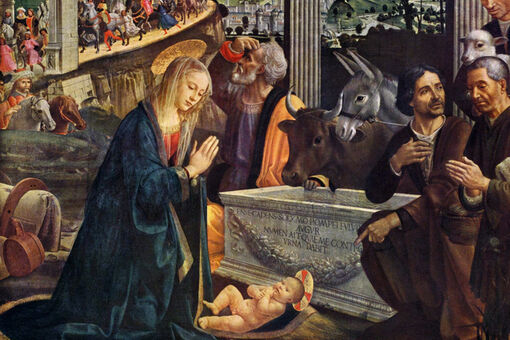 The Complex Meaning behind One of Christmas’s Most Enduring Symbols
Artsy Editors
Dec 22, 2015