This Photographer Is on a Mission to Document 12,000 Animal Species before They Go Extinct 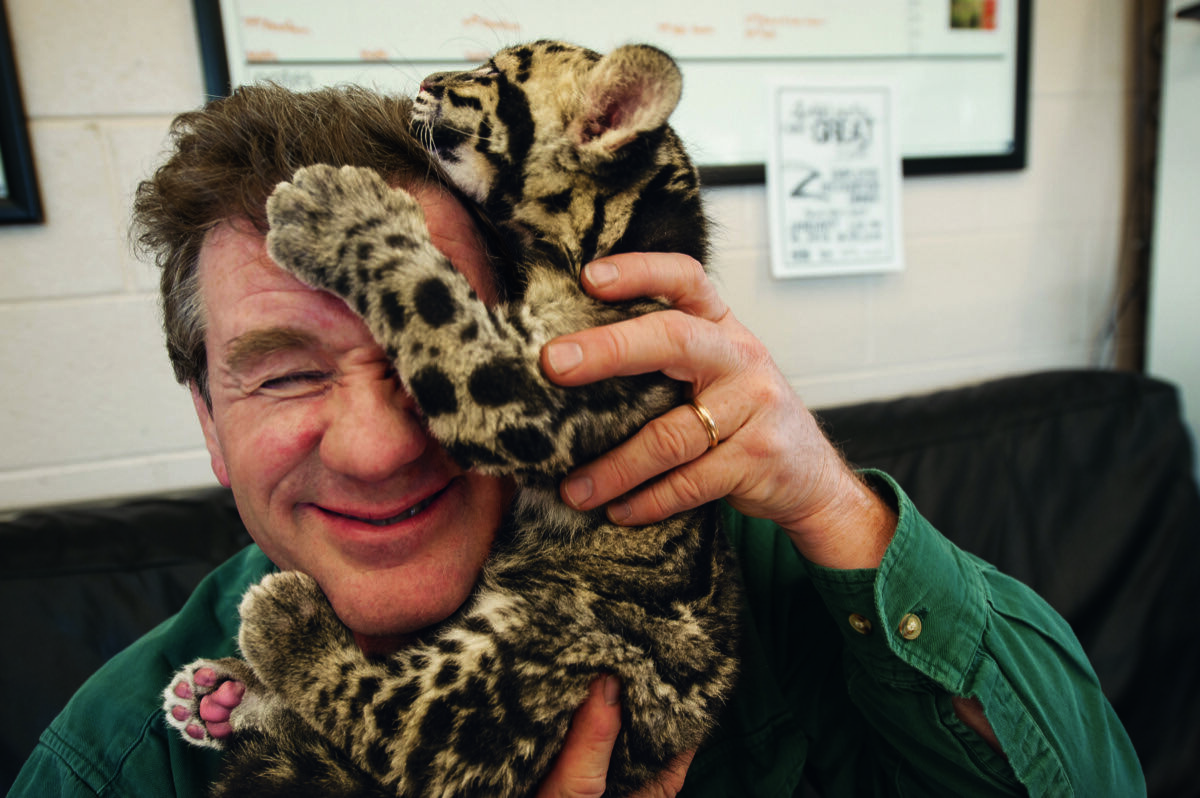 Photo by Grahm S. Jones. Columbus Zoo and Aquarium, Ohio. After a photo shoot at the Columbus Zoo in Ohio, a clouded leopard cub climbs on Sartore’s head. The leopards, which live in Asian tropical forests, are illegally hunted for their spotted pelts. Courtesy Joel Sartore/National Geographic Photo Ark.

National Geographic photographer Joel Sartore is accustomed to taking photographs of the world’s most majestic creatures—from ocelots and bengal tigers to elephants and octopi. But recently, he visited a research lab at the University of Florida Gainesville to photograph bed bugs, carpenter ants, and termites.
“When you get up close and you look at any of these things, they’re all amazing, they’re all remarkable,” Sartore says of the pests. The insects were given same star treatment as the more revered species that populate his ambitious photography project, the Photo Ark.
For over a decade, Sartore has traveled around the world, visiting zoos, aquariums, and wildlife sanctuaries, on a mission to photograph every animal species in human care—before they become extinct. He estimates that the ambitious project will take an estimated 25 years to complete, and will document some 12,000 species in total. More than simply an archive of the world’s most beautiful creatures, it’s a wake-up call: If we don’t change the way we treat the planet, half of the globe’s species could be gone by the year 2100. 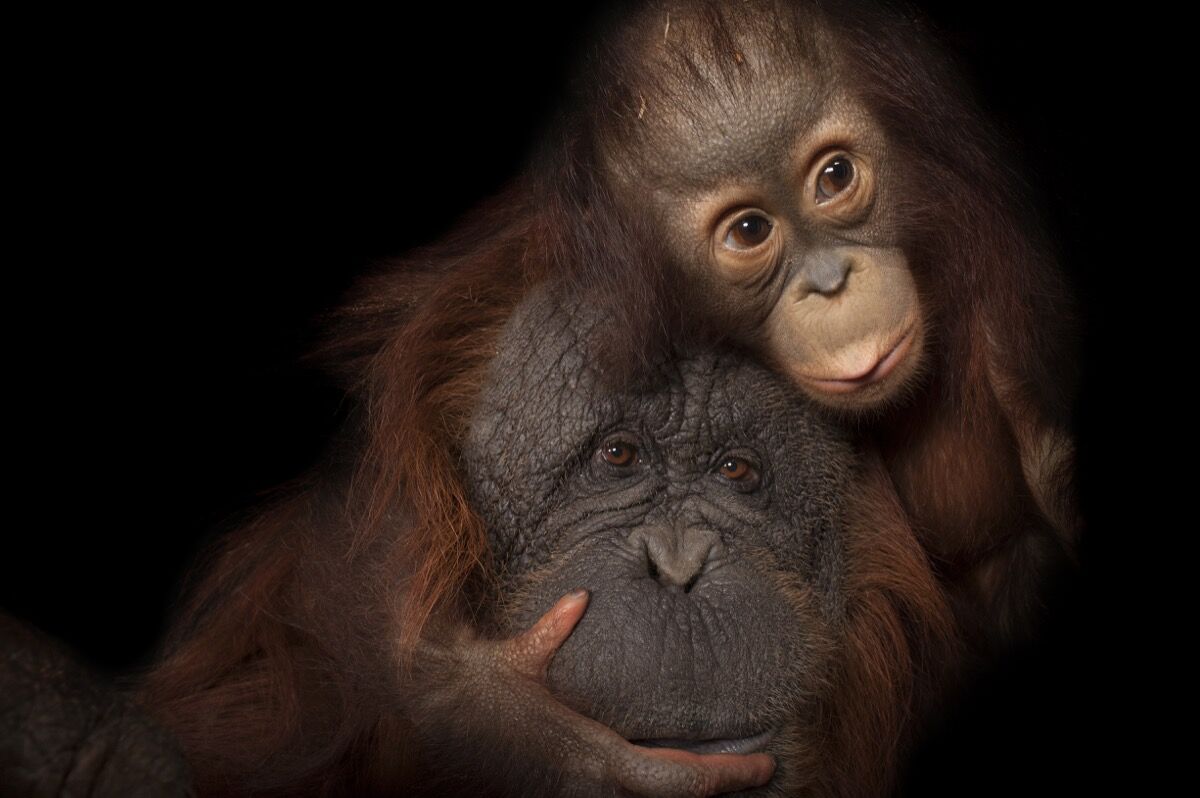 Sartore first came up with the concept in 2005, when his wife was diagnosed with breast cancer and he took a year off from work to care for her. During that time, he looked back on the conservation stories he had done for National Geographic up to that point—covering everything from bald eagle recovery in the U.S. to koala rescue in Australia.
“I’m interested in shooting pictures that can go to work,” Sartore tells me. “They aren’t just things that people look at and throw away; it inspires them to take action.”
Prior to the Photo Ark, Sartore was well aware that a timely story could have a measurable impact. One piece for National Geographic on Madidi National Park in Bolivia had helped to prevent the government from building a dam that would have drowned a thousand square miles of rainforest. But he found that stories like these were too few, and their shelf life too short.
“I was able to think at length about how to spend the second half of my life working towards conservation in a more meaningful, lasting way,” he recalls. The Photo Ark was born. 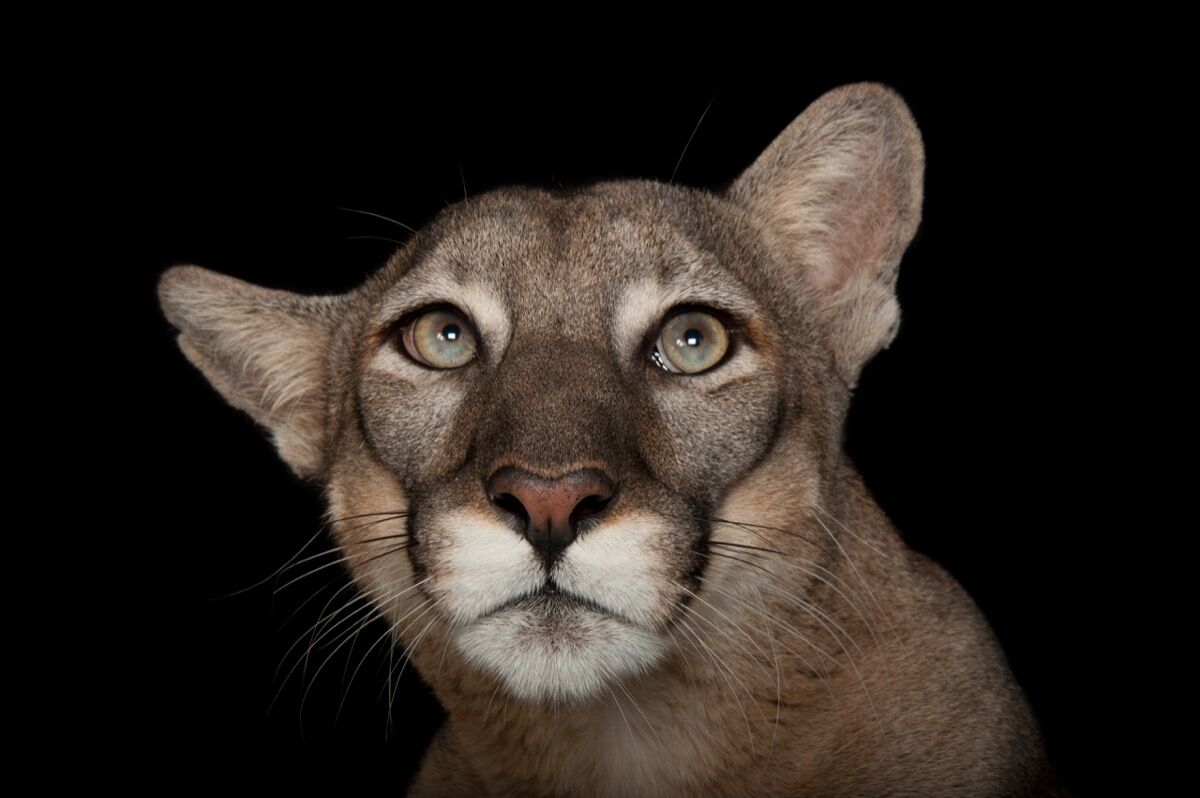 Advertisement
The project not only draws attention to the devastation of animal species up to this point, it shows the public which could be the next to go—in some cases, the animals being photographed are the last remaining examples of their species.
“Many of the zoos I go to are housing the only populations of these animals,” Sartore notes. “There are no more in the wild, so these zoos really are the keepers of the kingdom.”
Importantly, Sartore also lays out steps that we can take to prevent future extinction. Right now, for example, he’s advocating for monarch butterflies, whose species are dwindling. He’s asking his 926,000 Instagram followers to grow milkweed plants—which the butterflies need to live—and sharing resources on how and where to plant them.
In order to build the ark in a manageable way, Sartore chose to focus on animals being held in human care (“It’d be very hard to get a tiger to come out of the woods and pose on my backdrop”). He recognizes the important work these institutions are doing as caretakers.
“They’re holding on to these animals for us until we get smart enough to restore the woods, to restore the marshes, to leave the oceans alone,” he offers. 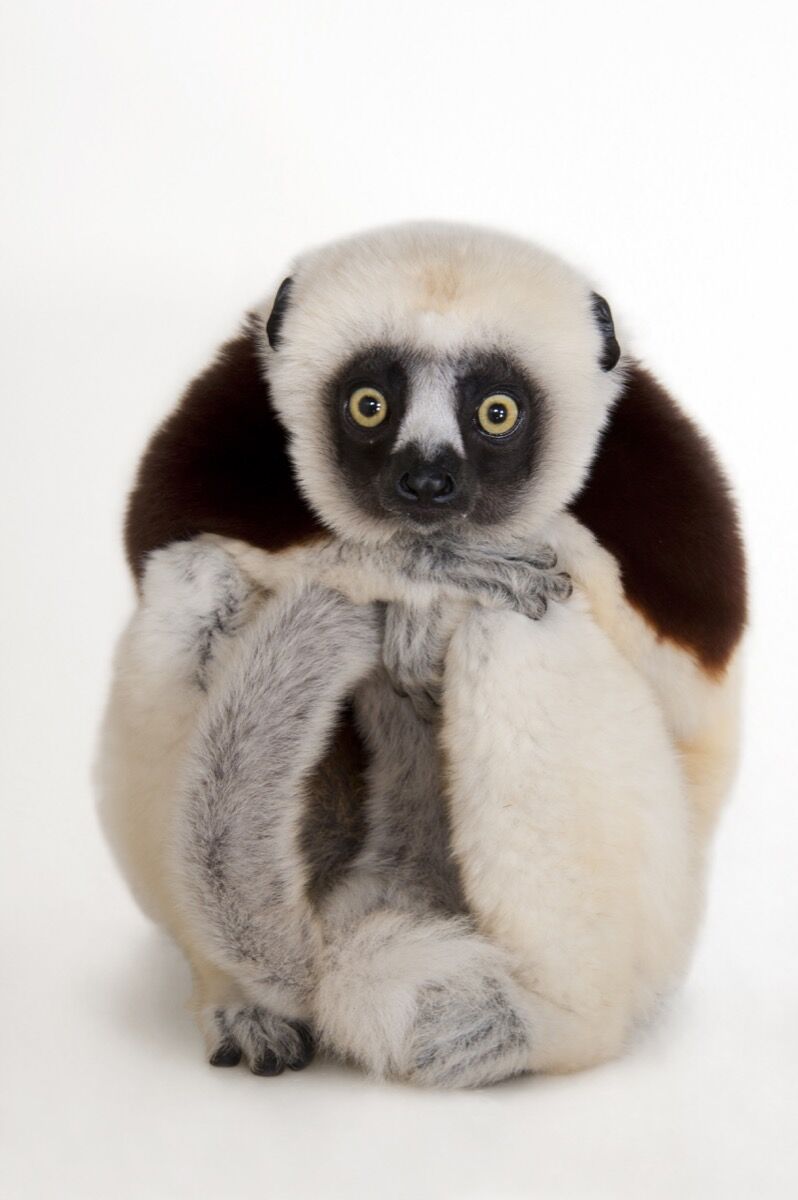 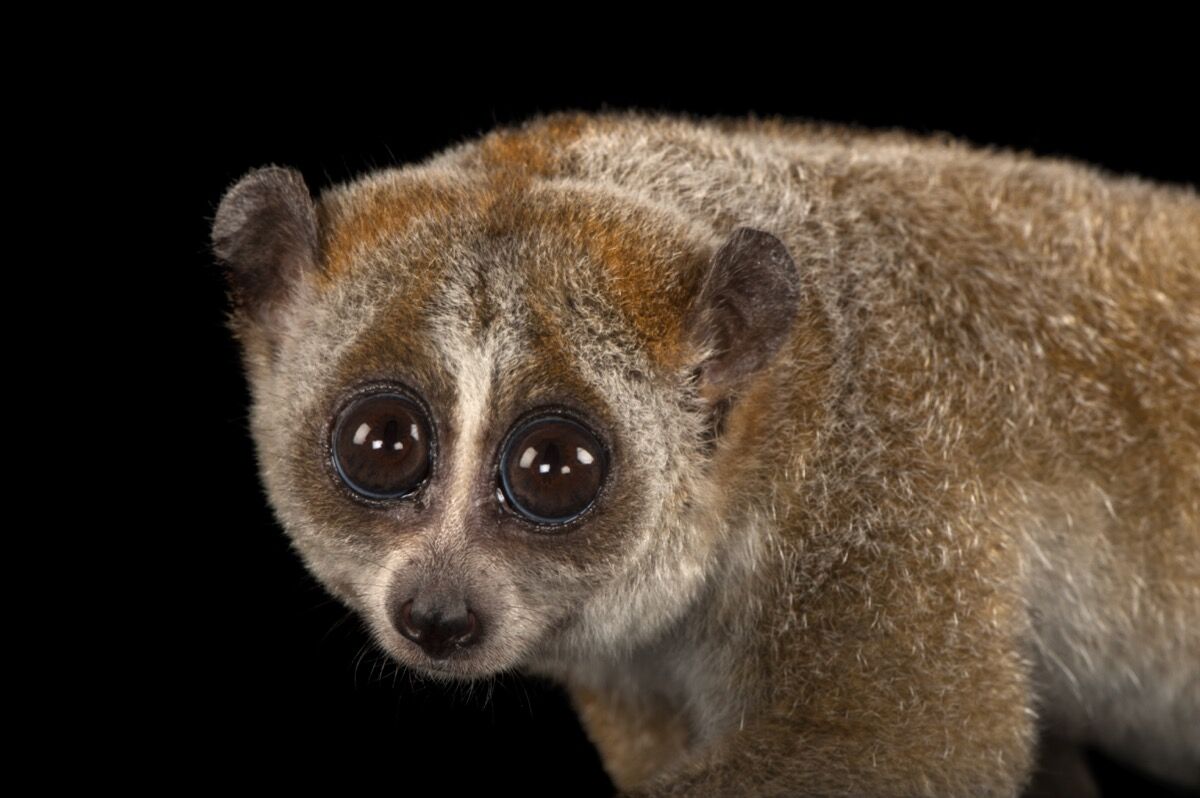 Sartore’s first photographs for the project were made at the children’s zoo closest to his home in Lincoln, Nebraska. From there he spun outwards, visiting Kansas City, then New Orleans—anywhere he could get to in his Prius, which carried his portable photo studio.
He now spends 75 percent of the year traveling to shoot animals. He’s covered nearly every species held in the U.S., and has started documenting creatures overseas. A new TV mini-series on the project, which premieres July 18 on PBS, shares footage from trips last year to New Zealand, Cameroon, and Madagascar, among other locations. Sartore has plans to visit Asia and Europe this fall. “A lot of the species we’ll see in Asia especially are endemic—meaning they’re restricted to that country or that location—so those are all important to get while there’s still time,” he explains.
But no matter the destination, the method largely stays the same. When shooting smaller species, Sartore is given a space at the given institution to set up his mobile studio, and animals are brought to him. With larger animals, zoos prepare a space with a backdrop, and expose the animal to the set-up in preparation for the shoot. The photo sessions are often scheduled during feeding times—lunch is a helpful distraction. He tries to make the shoots quick and seamless, to put as little stress on the animals as possible.
The resulting photographs have a cohesive style—crisp, brightly lit, with black or white backdrops to best highlight the animal’s features. Sartore, aiming for the powerful emotional pull of eye contact, aims to shoot his subjects when they look directly into his lens.
“Eye contact is so attractive to human beings. We’re primates, we’re very motivated and reactive to eye contact, so that’s what we’re going for in every case,” he says. (Though he’s quick to add that some species he shoots—sponges, corals, anemones, and some insects—don’t have eyes in the first place.) 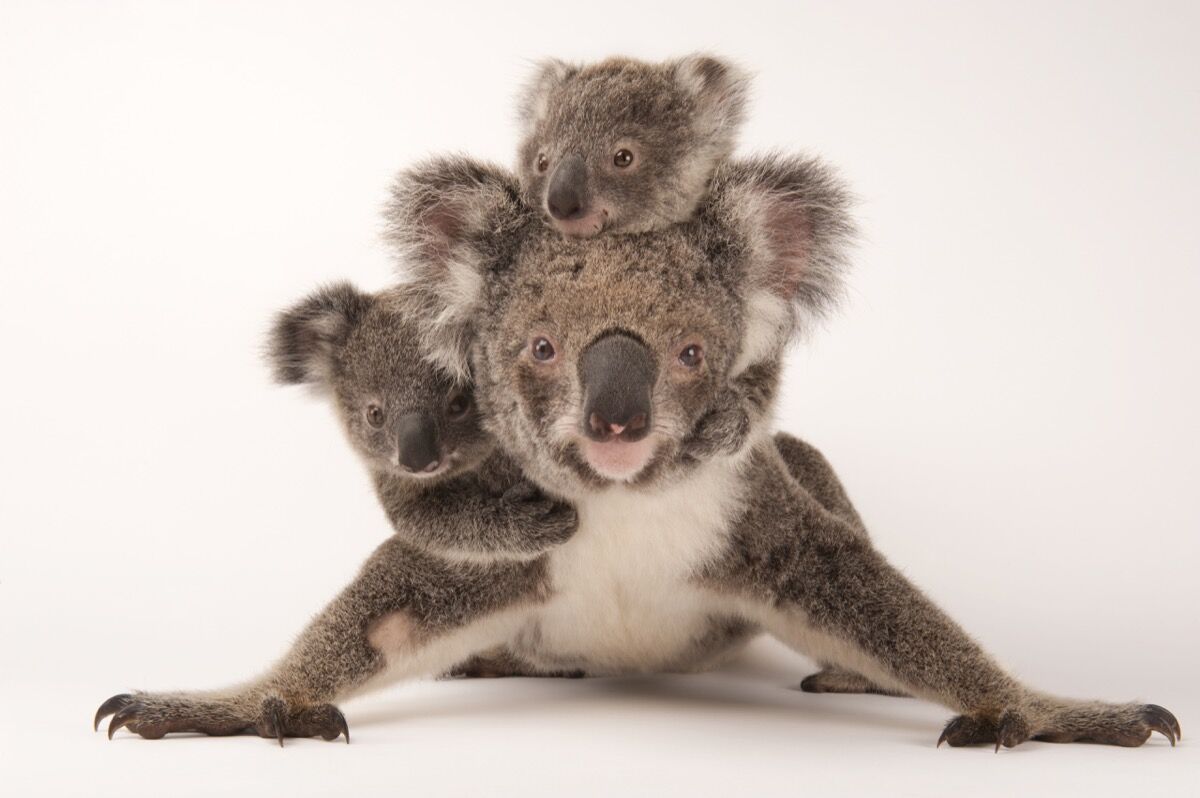 Sartore has developed some tricks along the way. Small containment tents and a flash can coax certain subjects, especially smaller land animals, into eye contact. “It looks like they’re in there to get their senior prom pictures done,” he jokes.
The best way to share his images, he’s found, is through Instagram. Sartore himself has a hefty following, and his images are often featured on the main National Geographic account, which has nearly 80 million followers.
“It’s a really good time to get the word out, and try to get species to go as viral as Kim Kardashian,” he quips, “to try to get people to pay attention to more than just celebrity news and the price at the gas pump.”
Presently, Sartore says, the world’s accredited zoos, aquariums, private breeders, and animal rehabilitation centers, hold around 13,000 species. But that number will drop over time as the last of some species die. “That number’s going to diminish at the same time that the number of species I’ve photographed is growing, so we’ll probably end up meeting at about 12,000,” he notes. Right now, he’s more than halfway there, with over 6,000 species documented.
Given that many of the species he shoots are the last of their kind, Sartore believes that for many animals, his photographs are the final chance to draw public attention to that animal’s endangerment. “Whether they’re considered a pest, something glorious and beautiful like a bird of paradise or an elephant, or one of the non-charismatic species—the sparrows of the world, the toads, the salamanders, the grasshoppers—I try to be the voice for the voiceless.”
“It’s an honor and a big responsibility to to be entrusted to do this, and I try to treat them all equally,” he adds, “they’re all loved and welcomed on board the Photo Ark.”
Casey Lesser is Artsy’s Lead Editor, Contemporary Art and Creativity.
Related Stories