This Photographer Is Reimagining Norman Rockwell for the 21st Century 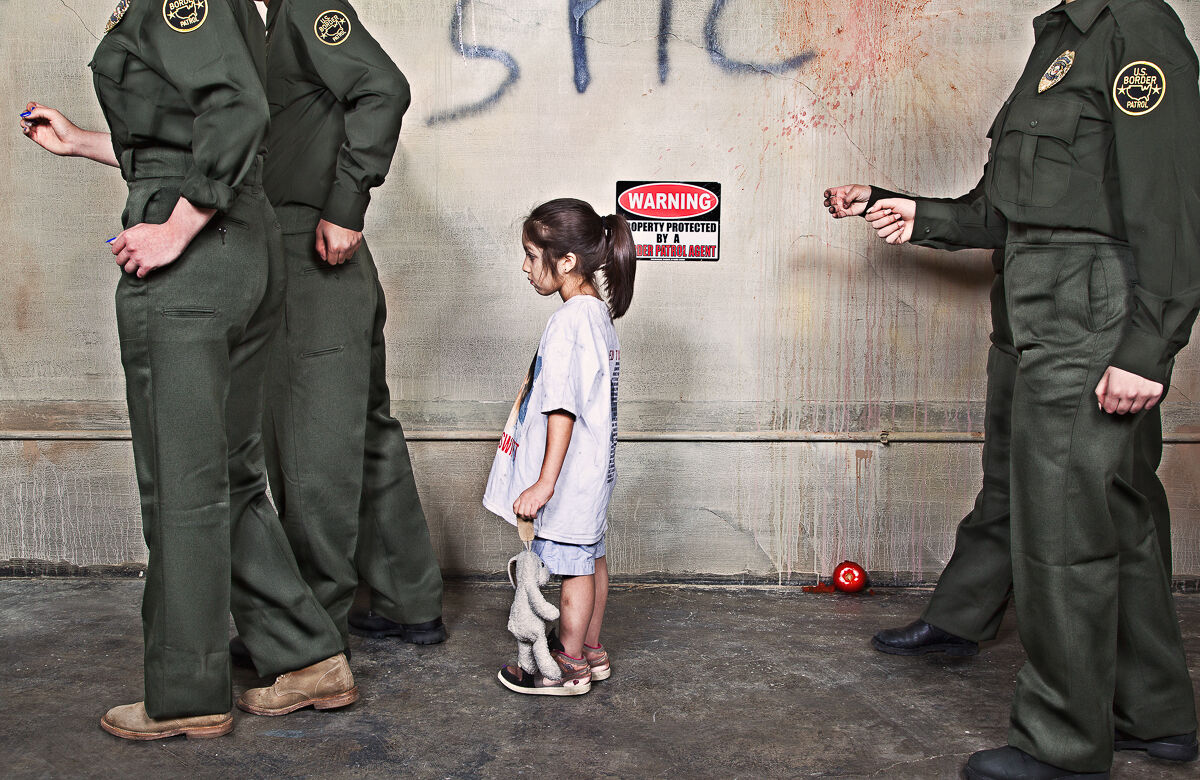 In 1964,
Norman Rockwell
’s Civil Rights-era painting The Problem We All Live With depicted Ruby Bridges, the 6-year-old black girl who entered an all-white school in 1960, walking between deputy U.S. marshals with volleyed tomatoes and a racial slur staining the wall behind her. In 2015, artist
Maggie Meiners
reimagined the famous composition to explore the plight of another youth: this time, a Dreamer—a child of undocumented immigrants given temporary protection under the 2012 Deferred Action for Childhood Arrivals (DACA) program.
In the photo, which she titled Dream Act (2015), Meiners directed actors and models to depict the scene of a young immigrant girl, standing alone and surrounded by a squadron of U.S. border-patrol agents. While Meiners created the image three years ago, it found new relevance under the current U.S. administration’s “Zero Tolerance” policy, enacted this spring, which resulted in immigrant children being separated from their parents at the U.S. border.
Dream Act wasn’t Meiners’s first Rockwell-inspired work. The artist has long been fascinated by the painter’s depictions of 20th-century American life, which charmed and shocked millions in the mid-1900s, and their power to adeptly illustrate an entire era.
Along with Rockwell’s arresting scenes of daily life—town gossips spreading the good word; a zookeeper on his lunch break while a lion eyes his peanut butter sandwich—were works that depicted timely, charged issues, like Civil Rights-era desegregation. In the process, his works came to embody American culture of the 1940s, ’50s, and ’60s, and the social issues Rockwell and his peers were grappling with. 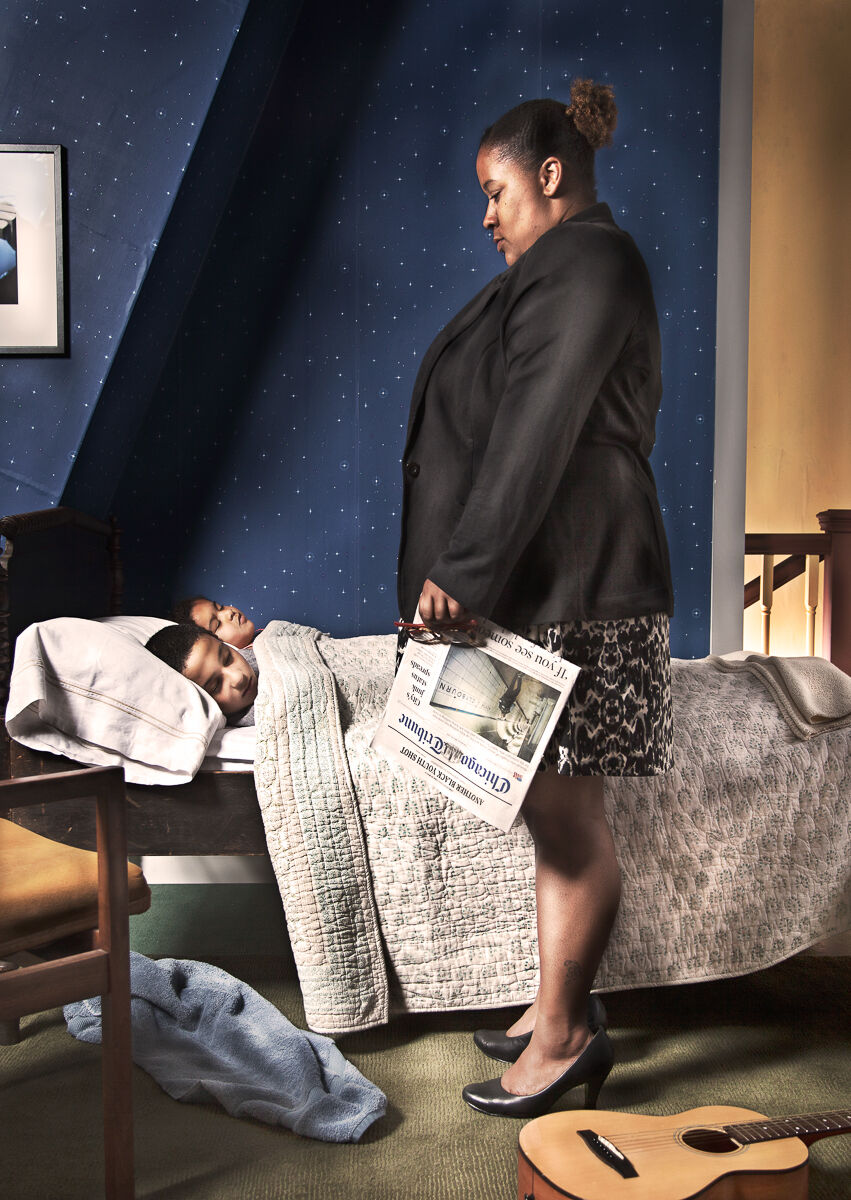 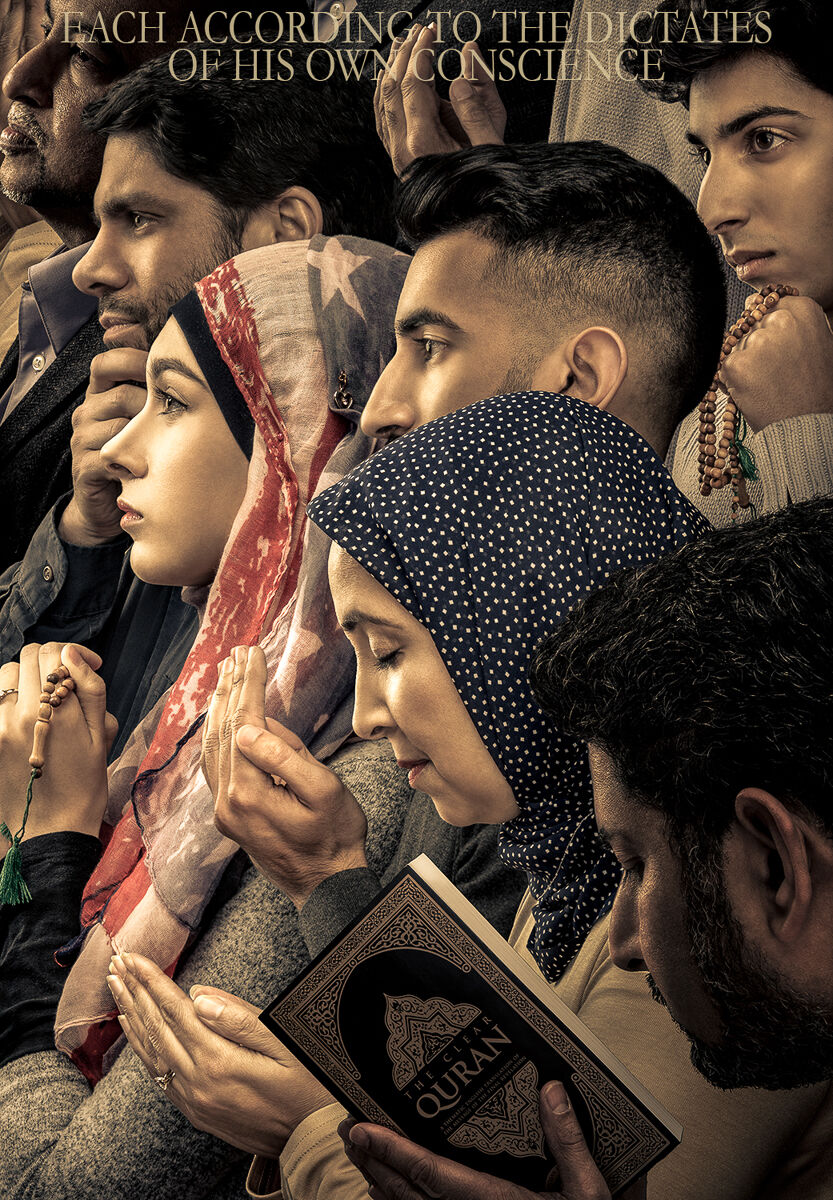 When Meiners visited the Norman Rockwell Museum in Stockbridge, Massachusetts, in 2010, she couldn’t help but wonder what Rockwell’s paintings would look like if they’d been made today—a thought that laid the groundwork for “Revisiting Rockwell,” her photo series that reimagines the legendary painter’s canvases in a contemporary context.
Meiners was facing Freedom from Want (1941–43), one of Rockwell’s most famous works, when the idea struck her. The painting depicts an idealistic Thanksgiving dinner, in which several generations of a middle-class white family gather around a long table crammed with requisite side dishes (cranberry sauce and the like) as the matriarch serves a massive, glistening turkey.
When Rockwell made the piece for the cover of the Saturday Evening Post, he set out to portray traditional family values—the starry-eyed kind included in then-president Franklin D. Roosevelt’s 1941 State of the Union address, known as “Four Freedoms.”
As Meiners studied the painting, she pondered what an ideal American family looked like in 2010—and, more poignantly, “who gets to decide what an ideal family is,” she told Artsy, from her home in Chicago’s suburbs. “What if you’re an orphan? What if you’re adopted? What if you’re gay?”
At the time, the state of California had recently overturned Proposition 8, the controversial same-sex marriage ban, and gay rights were on Meiners’s mind. The court’s decision gave the artist hope that narrow definitions of family were expanding, and she wanted to illuminate the shift. 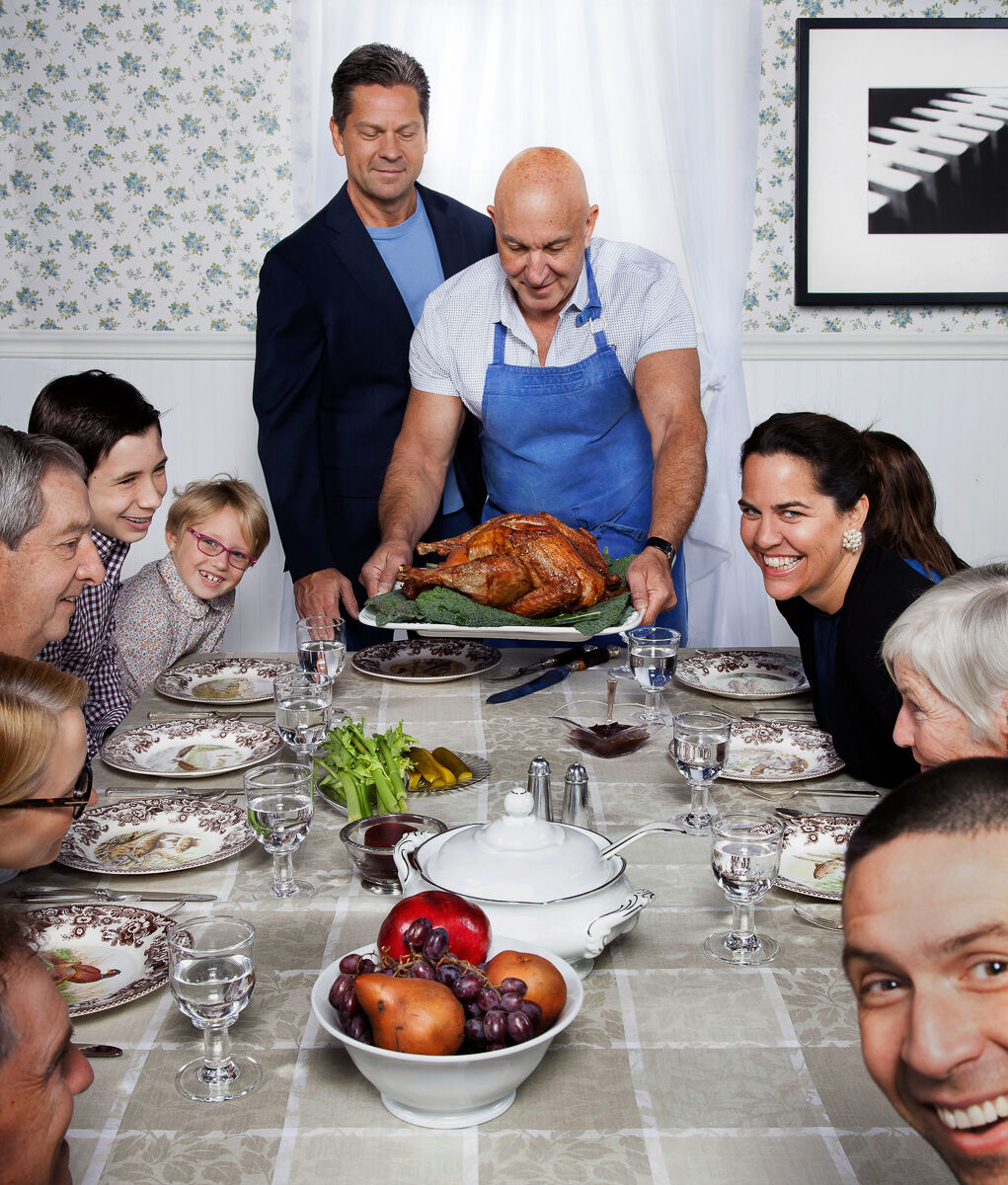 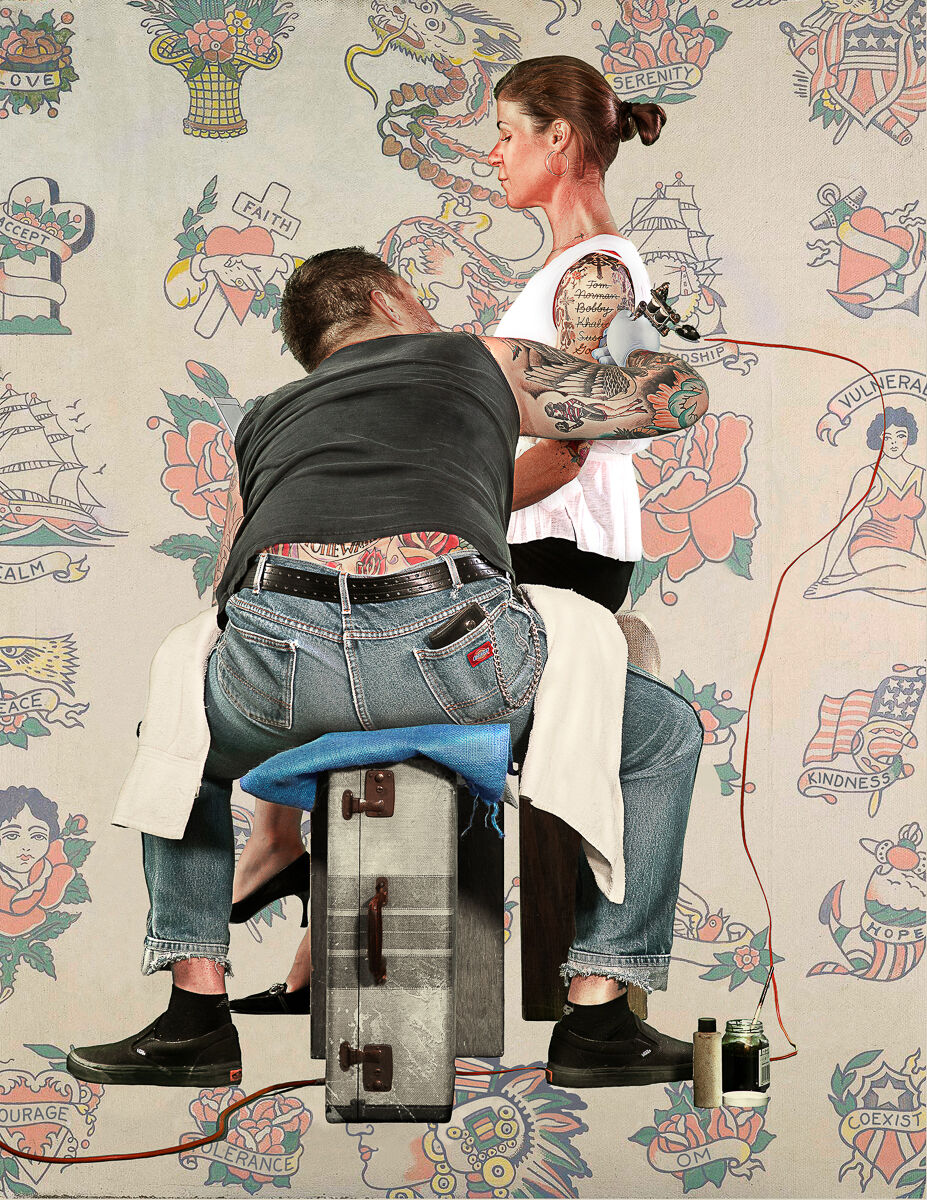 Advertisement
Meiners has a background in cultural anthropology, so before executing a Rockwell reboot, she wanted to take a deeper dive into the the social forces that informed Rockwell’s work. She began researching his practice and the political climate of his time, and realized that many of the topics that Rockwell depicted (parenting, generational divides, freedom of speech, race relations) could be tweaked to reflect contemporary culture.
From there, Meiners chose a number of paintings and illustrations to adapt for “Revisiting Rockwell.” Her selections were based on two factors. First, “it was about what I could actually execute,” she recalled. Restaging Rockwell’s compositions would be a complicated process, as many are filled with 10 or more subjects set against detailed backdrops. More importantly, though, a given piece needed to depict a subject that was “translatable to something that’s going on today,” she said. “I asked myself: ‘What can I say now that’s a little different than what was said in Rockwell’s time?’”
To ease into the series, Meiner temporarily shelved her plan for an updated Thanksgiving scene and started with Rockwell’s The Tattoo Artist (1944), a painting that portrays just two people (logistically, this would be easier to restage with sets and models than more complex, larger works). While Rockwell’s piece shows a male sailor getting inked—the names of six past lovers on his muscled arm crossed out in favor of the newest, “Betty”—Meiner trades Rockwell’s macho protagonist with a woman, toppling 1940s gender dynamics in the process. In her version, a woman can proudly brandish tattoos and boast many past lovers, too.
Soon after, Meiners took on the rendition of Freedom from Want, placing a gay couple at the head of the Thanksgiving table. Next was the lighthearted It Went Viral, in which Meiners restaged Rockwell’s famous The Gossips (1948), replacing the landlines that townspeople use to play a game of real-world “telephone” with big, glowing smartphones. 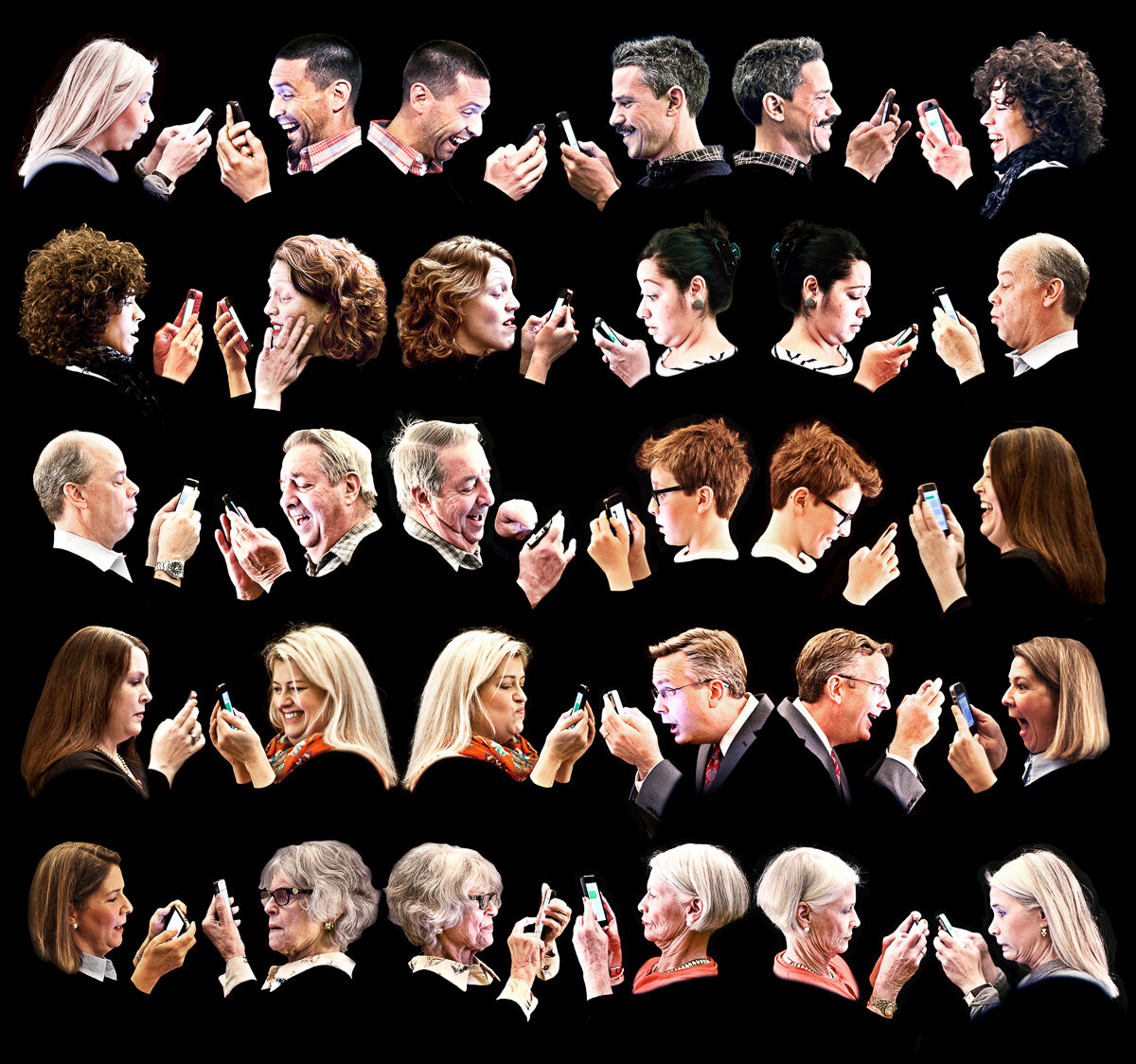 However, most of Meiners’s works in the series, like 2015’s Dream Act, strike a decidedly more serious tone. Her transformation of Rockwell’s Freedom from Fear (1943) is particularly powerful. In his painting, parents tuck their children into bed while holding a newspaper emblazoned with all-caps World War II-era headlines, telling stories of widespread bombing overseas. Meiners replaces the white family with a black mother and her two young sons, who face violence that exists much closer to home. She grasps a copy of the Chicago Tribune, bearing the headline “Another Black Youth Shot,” referring to police violence and structural racism in America.
Like Dream Act, Meiners’s photographs are meant to provoke discussion. Her work often deconstructs and reconstructs American iconography and visual history. And though it took three years for Dream Act to make waves on the internet, the impact was profound. Hollywood actress Jennifer Garner even posted it on her Instagram account on June 29th. Under it, her caption read: “This photograph from @maggiemeinersprojects #revisitingrockwell collection tells you everything you need to know in a glance. Kids belong with parents.”
The popularity of Meiners’s Dream Act, and the controversy it reflected, resembles the public response to Rockwell’s most probing, incisive works. And that, of course, was Meiners’s hope for “Revisiting Rockwell.” “That was my big takeaway from this project: things change,” she said. “But there’s always something else that needs to be worked on.”
Alexxa Gotthardt
Related Stories