These Photographers Captured the Madness and Passion of Heavy Metal

Zach Sokol
Jun 1, 2018 12:07pm
The roots of metal stem from British and American musicians living in working-class neighborhoods—mid- to late-1960s acts like Black Sabbath, Led Zeppelin, Jimi Hendrix, and Deep Purple, as well as Blue Oyster Cult, MC5, and The Stooges—who infused classic rock ‘n’ roll with heavier riffs, louder distortion, and more sinister lyrics and aesthetic tropes.
Metal would evolve constantly and complicatedly over the following decades, eventually splintering into countless subgenres: power metal, the “new wave of British heavy metal,” progressive metal, thrash metal, black metal, Norwegian black metal, death metal, Swedish death metal, grindcore, metalcore, stoner metal, industrial metal, nu-metal, and even Kawaii metal (sometimes described as “cute metal”). Each branch has its own codes, cues, cliques, and quirks in both sound and style, as well as diehard legions that follow their preferred sub-subgenre or particular band as if it were a religion. (In the case of Norwegian black metal, the votary was quite literal, as the Scandinavian metal community of the early 1990s became overtly tied to Satanism and anti-Christian practices.)
Though the differences among, say, the virulent blast-beats of black metal bands like Venom and the viscous sludge and turn-it-up-to-11 distortion of stoner metal groups like Sleep and Kyuss could not be more pronounced, the disparate scenes all share a certain ethos that transcends pentagrams, devil-horn hand gestures, rippin’ guitar solos, guttural singing, and face paint. A number of excellent photo projects have attempted to highlight the fans and bands that have made this cult music genre more than the sum of its parts. 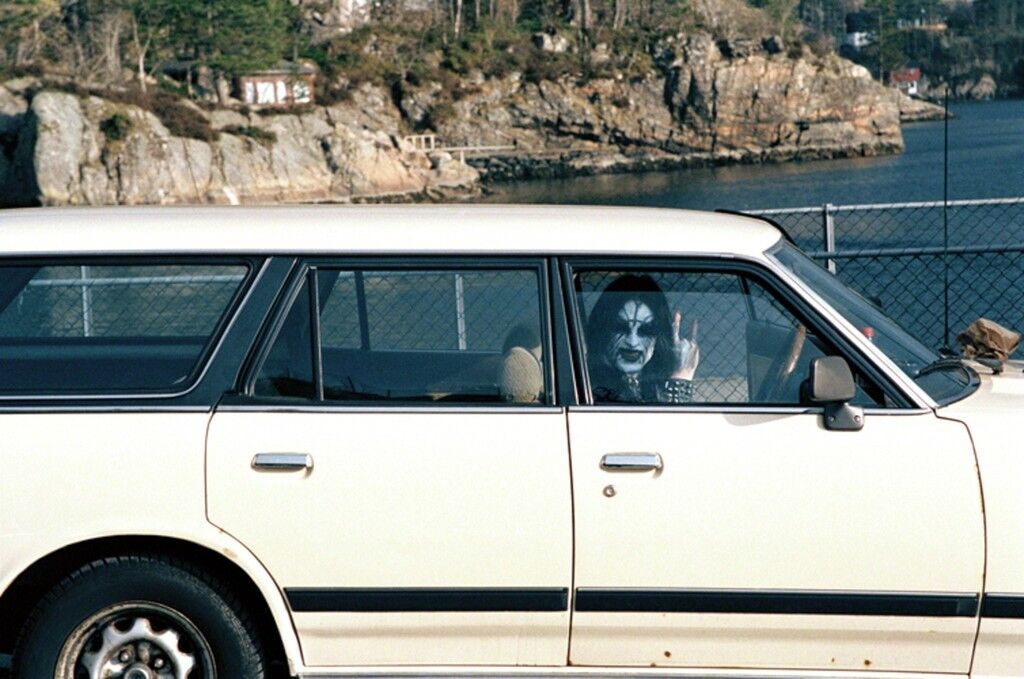 Peter Beste
King Car Horns, 2003
Fifteen Gallery
“I am unafraid to photographically explore that which society might deem politically incorrect,” explains American documentary photographer Peter Beste, whose oeuvre has spotlighted music subcultures such as Houston rap, London grime, and especially Scandinavian black metal.
The latter genre has one of the most violent and nefarious histories of all of metal’s substrata, burgeoning in the early 1990s with Norwegian groups like Mayhem, Burzum, and Gorgoroth, who built off the extreme sound developed by earlier European acts like Zurich’s Celtic Frost, Copenhagen’s Mercyful Fate, and Sweden’s Bathory. 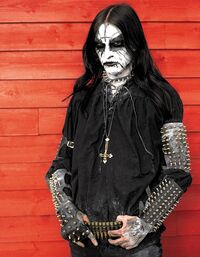 6 Images
View Slideshow
Advertisement
Known for theatrical “corpse paint,” misanthropic worldviews, and a public embrace of Satanism and vitriolic anti-Christianity, Scandinavian black metal (sometimes nicknamed “Satanic black metal”) established a global presence after members of the scene incited a wave of arson attacks against historic churches throughout Norway. In 1994, Varg Vikernes of Burzum was found guilty of both burning down several churches and murdering Mayhem guitarist Øystein “Euronymous” Aarseth, effectively establishing the country’s music underground as the most brutal faction within all of metal. (For context, Mayhem’s singer, Per Yngve “Dead” Ohlin, had committed suicide three years prior, and Euronymous allegedly fashioned pieces of his skull into necklaces.)
Beste documented the Norwegian metal scene for many years, gaining access to its insular and cultish heart. VICE Books released Beste’s monograph, True Norwegian Black Metal, in 2008. His photo work showcases the deadpan morbidity and self-seriousness of this fringe community; we see band members from acts like Darkthrone and Carpathian Forest wearing face paint and leather, brandishing weapons on the streets of Bergen and other black-metal hubs. Rather than purely glamorize the anarchic bands or attempt to rewrite history, Beste sought to “portray the various groups documented as they express themselves, without reference to outside opinions or ideologies.” Whether it’s a shot of disembodied sheep heads on display at a concert or a photo of vocalist Nattefrost “covered in his own shit,” the documentarian lets the bleak imagery speak for itself. 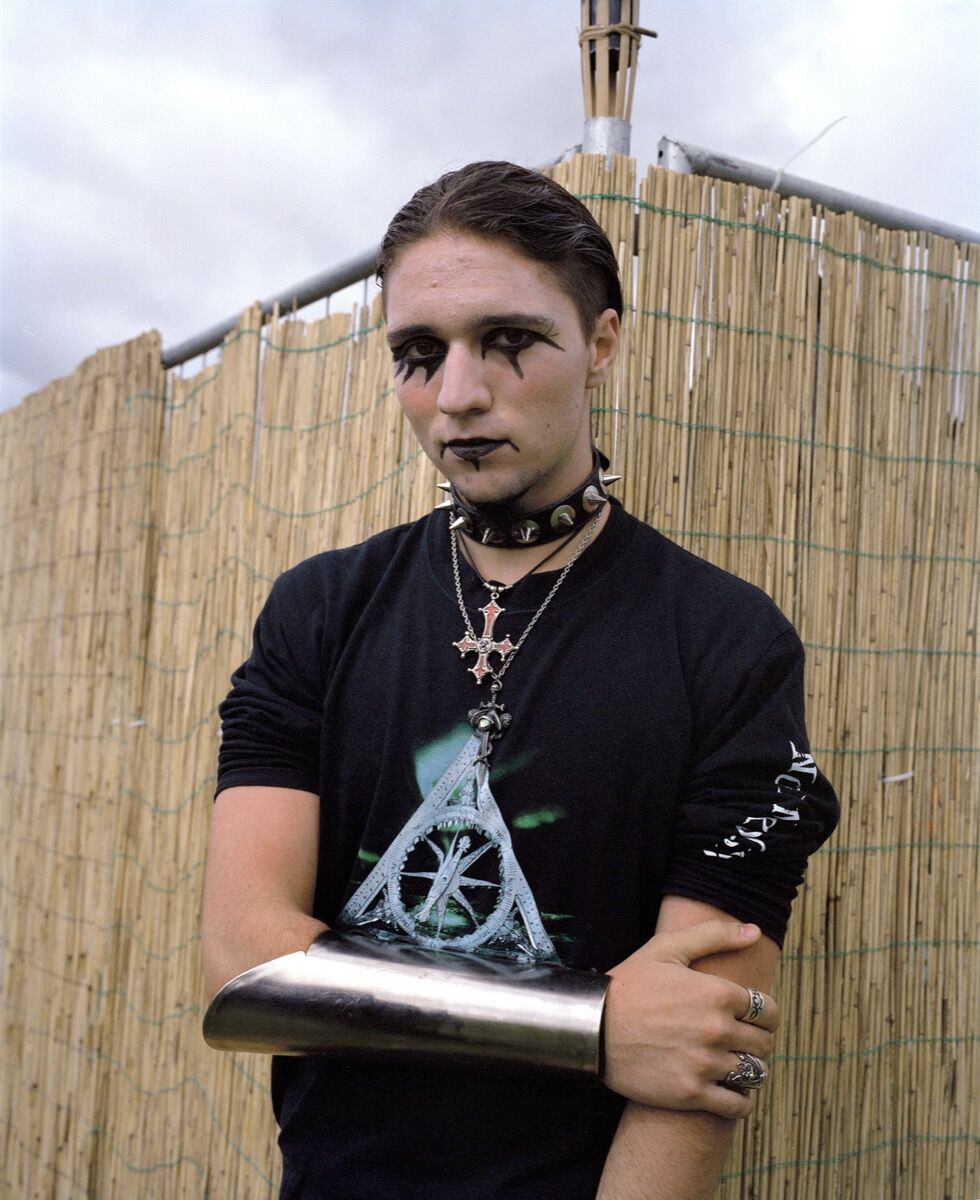 When Sanna Charles, a British music photographer who worked for NME and Melody Maker, was assigned to shoot a Slayer concert in the early aughts, the nefarious California thrash metal band’s set was delayed by three hours, leaving fans waiting in grueling heat and packed into the venue like sardines.
The band eventually performed, but it was the fans—not the quartet’s pummeling speed anthems—that inspired the photographer’s work for years to come. While other photojournalists left after a few songs, Charles was “mesmerized by the crowd” whose “pure release of anger and aggression…felt so free,” as she said in an interview over a decade later. 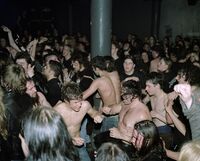 5 Images
View Slideshow
Charles began traveling around Europe to shoot (often shirtless) teenagers with long hair outside venue gates and inside mosh pits. In 2015, Ditto Press released the impeccably titled God Listens to Slayer, a photo compilation of Charles’s years-long ethnographic exploration into the band’s disciples.
Though Slayer fandom is a fervent, extreme lifestyle (naturally, the book features images of the Slayer logo carved into the arms of sweaty headbangers), Charles was interested in “the innocence of their often youthful fans.” God Listens to Slayer turns its lens on the pockmarked kids whose budding angst is alleviated by the group’s escapist, “fuck everything” mentality—a ritualized release that Charles visualizes in equal parts joy and fury. 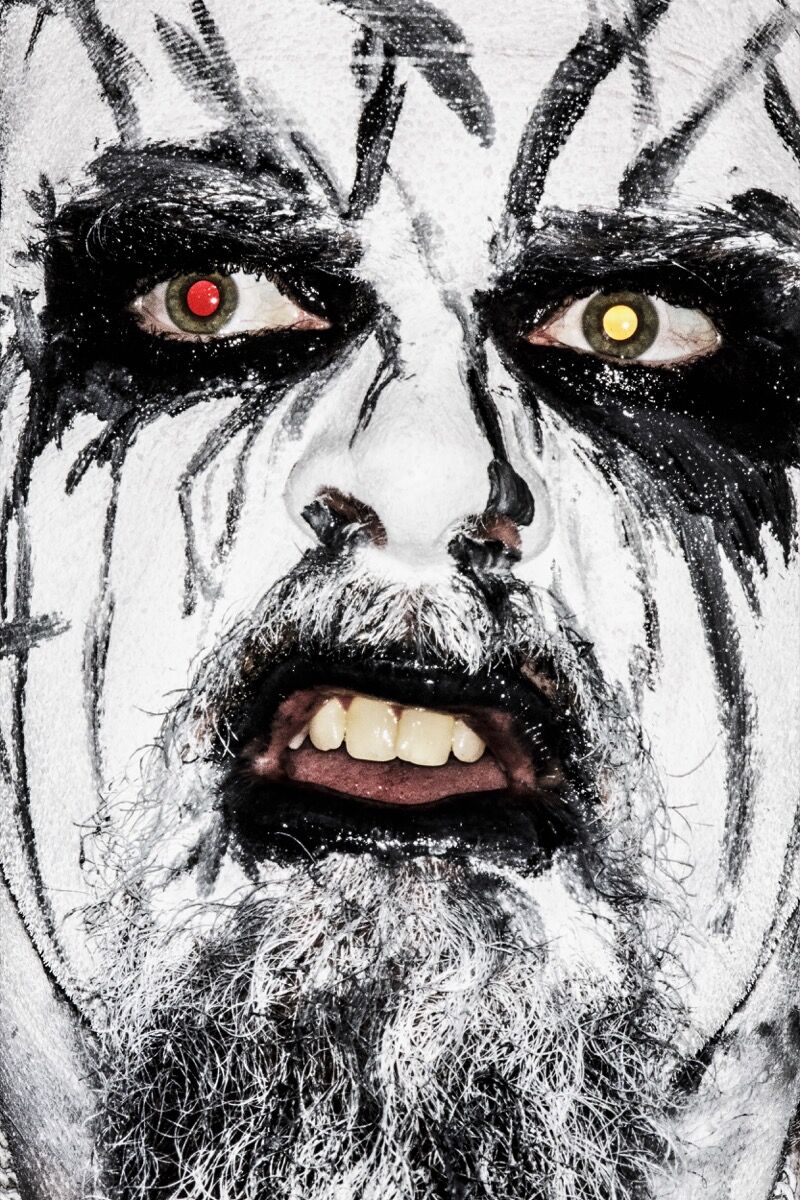 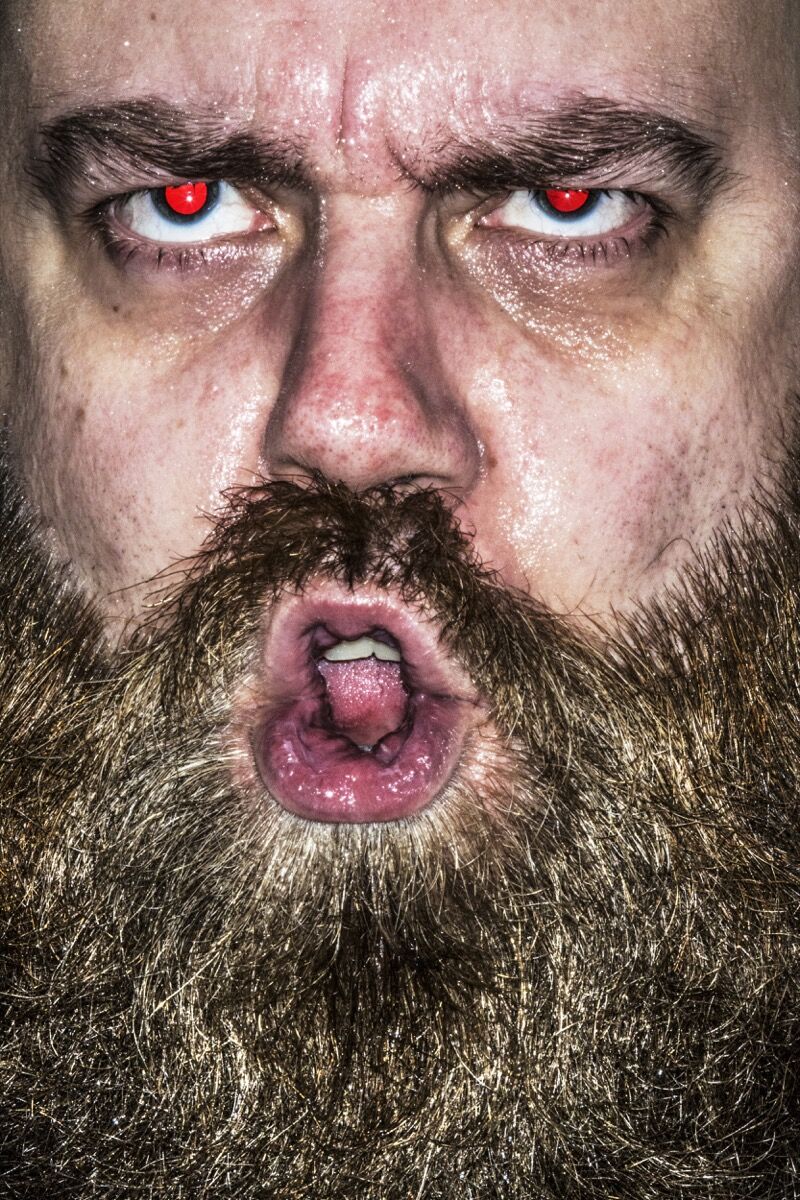 Listening to metal and seeing it live are two different beasts, as the mega-tour spectacles of bands like Metallica, Slayer, and Anthrax clearly evince. But rather than focus on pyrotechnics, overpowering strobe lights, and stacks of Marshall amps, Norway’s Jonas Bendiksen honed his lens in on the expressive faces of frontmen mid-performance for a photo series titled “Singing Norwegian Singers.” 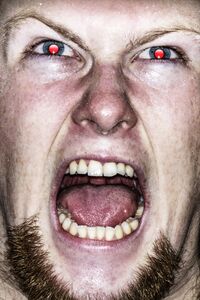 4 Images
View Slideshow
Not unlike Magnum alumnus
Bruce Gilden
, Bendiksen literally got up close and personal with his subjects. We see eyes bulging out of sockets and sweat-drenched beards; mouths are twisted or agape, in a way where you can feel the sheer abrasiveness of the vocals without hearing them. The artist once described the project as “a tribute to that energy of this way of making music.…I just wanted to photograph Norwegian brutal music in a brutal way.” 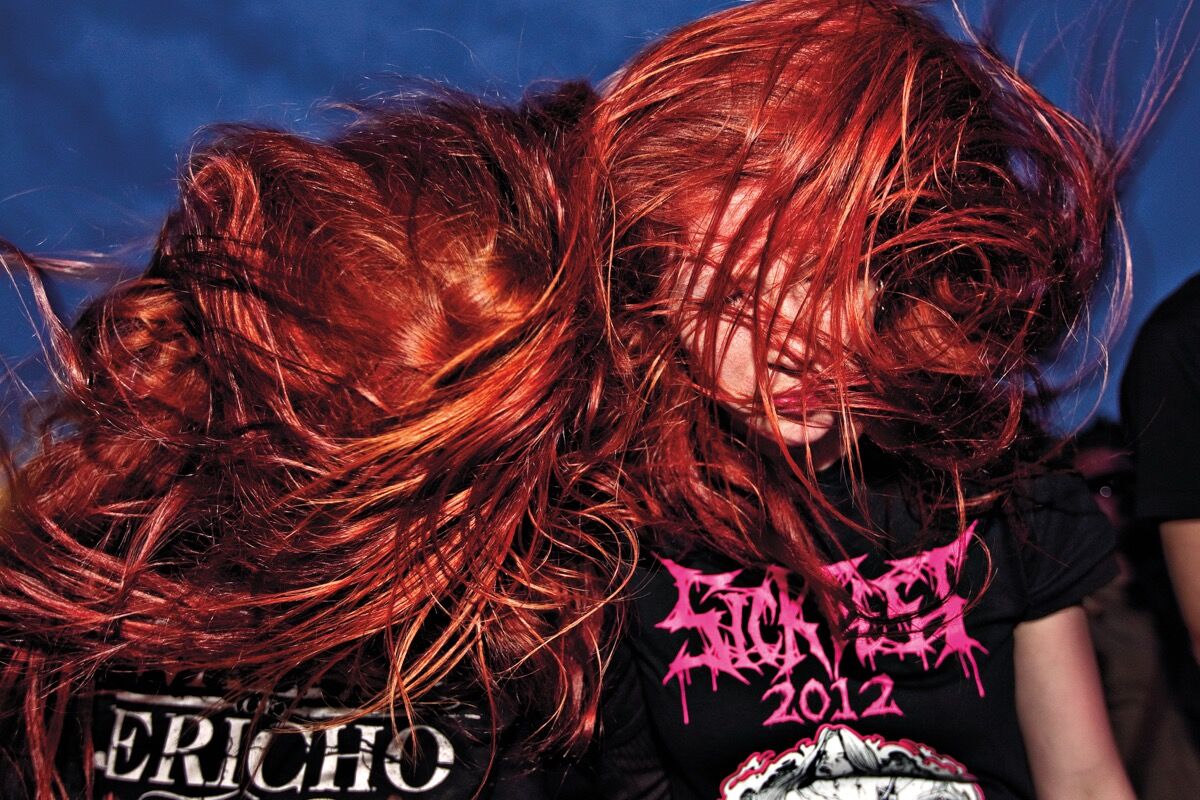 Jacob Ehrbahn doesn’t have long hair, but the Danish photojournalist is deeply familiar with those who do. Though his past work has grimly showcased heavy handed subject matter—such as the plight of Mongolian runaways known as the “street children” generation, or the disenfranchised community in Youngstown, Ohio, after the loss of steel industry jobs—the staff photographer at Danish newspaper Politiken took a euphoric (and heavy-headed) approach to his documentation of European metal fans.

5 Images
View Slideshow
In Headbangers, a photobook released by powerHouse in 2015, Ehrbahn used an on-camera flash to capture metalheads frozen in motion as they flail their bodies, shake their jowls, and give themselves a case of whiplash to the accompaniment of double kick drums, dueling guitar solos, and doom-filled anthems. The photographer traveled to the crème de la crème of metal fests—Denmark’s Copenhell, Germany’s Wacken Open Air, and Sweden’s Metaltown—but you wouldn’t know it from these photos: Most subjects are shot from below with little in the frame besides unkempt locks, rapturous facial expressions, and grey skies. The publisher calls it an “intimate world disconnected from time and space,” but to metal fans, it may as well look like heaven. 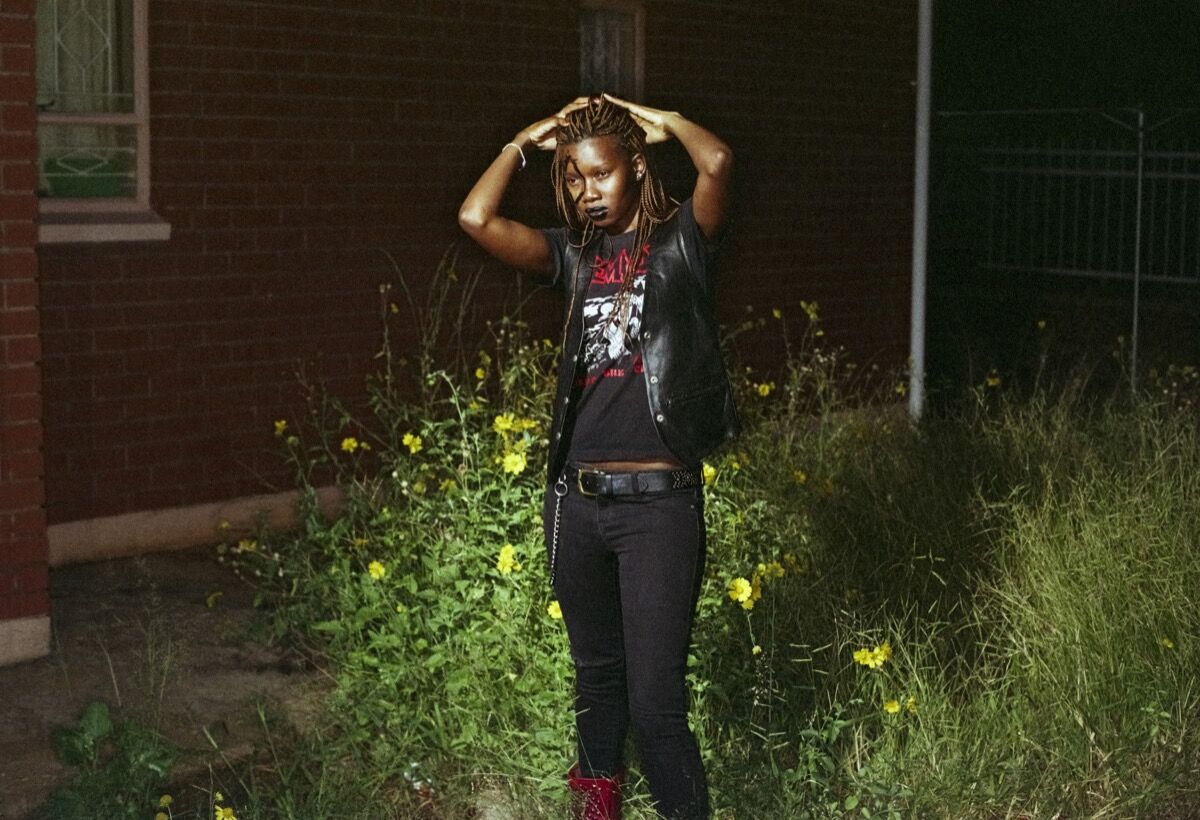 Metal as a genre has infinite permutations, but it’s impossible to deny that its musicians and fans are often homogenous. Look at concert footage from any major festival, and the crowd will be a sea filled primarily with white men.
So when South African photographer Paul Shiakallis first encountered the “Marok”—the name for Botswana’s metalhead subculture—at a 2010 show, he was “instantly attracted” to the self-described “Queens” who are integral to the scene.“I had never seen a group of women letting go like they did at this concert; it was liberating,” he told i-D in 2017. 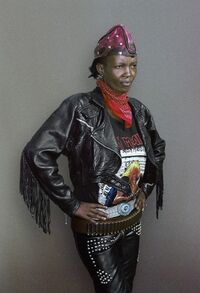 5 Images
View Slideshow
After seeing other news outlets cover the Marok and only highlight the male members, Shiakallis decided to document the leather- and stud-clad women, emphasizing the “forgotten narrative of the eccentric black woman in rock.” Collected in a series entitled “Leathered Skins, Unchained Hearts,” his images feature these stoic, stylish female fans posing both in their homes and in nature, accompanied by quotes from subjects about the country’s metal underground. As one Marok Queen told Shiakallis, “Only girls who believe in themselves and are not afraid to express themselves can be rockers.”
Zach Sokol
Related Stories