These Photographers Captured the Renegade Youth of Skate Culture

Alexxa Gotthardt
Jul 30, 2018 1:10pm
In the mid-1970s, teen skateboarder Jay J. Adams descended on an empty swimming pool in Southern California, with beers and board in hand. A drought had recently ripped across the state, forcing residents to drain their backyard swimming holes. For many, it was a disappointing summer. But not for a crew of misfit young skaters known as the Z-Boys. From their vantage point, those smooth concrete craters made perfect skate bowls—sanctuaries for a sport and subculture they were unwittingly pioneering.
As Adams and his team of now-legendary skaters moved across Venice Beach’s mobbed streets and abandoned backyards that decade, photographer and writer Craig Stecyk was there to capture their antics. In one iconic image, Adams pulls off a frontside 5-0 while simultaneously downing a beer mid-air. On the other side of the empty swimming pool-cum-skatepark, his buddy looks on, wearing massive sunglasses and Converse high tops.
Since the early ’70s, when skateboarding went from a kids’ diversion to a full-on way of life, photographers have documented its evolution. Below, we highlight nine artists who’ve chronicled the adventurousness, camaraderie, and exuberance of skateboarding. 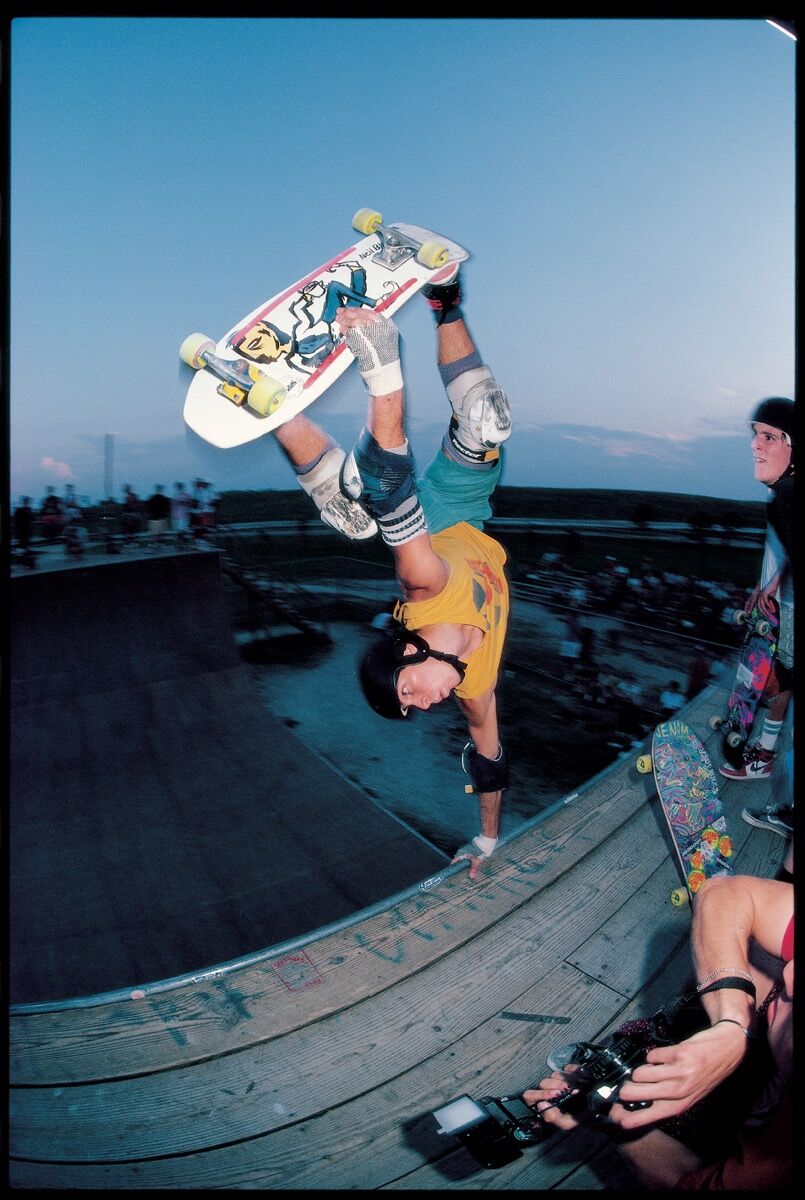 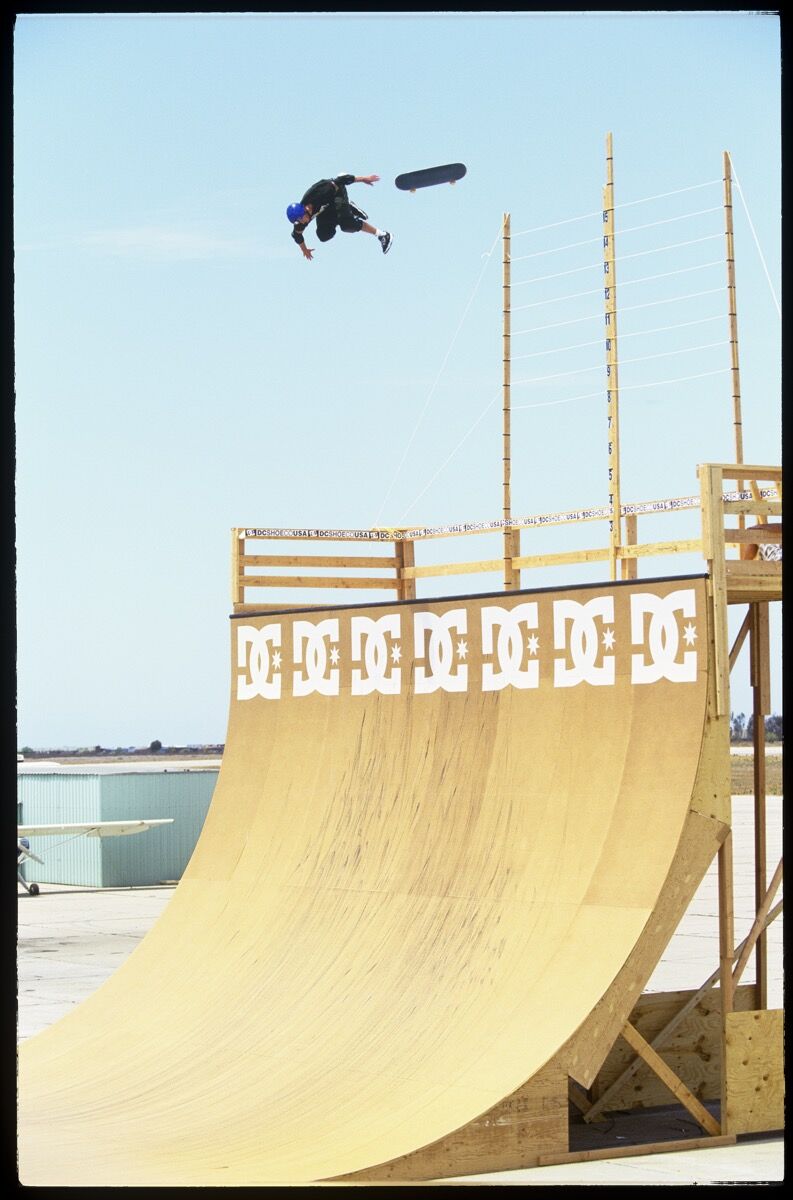 In 1979, Grant Brittain was a 20-something art student and self-described “worker bee” at the Del Mar Skate Ranch, a legendary skate park just north of San Diego, when he borrowed a friend’s camera and took his first skate shot. “At that point I had no intention of making a career out of shooting skaters,” he has recalled. “But ever since that day I have had a love affair with photography.”

Grant Brittain
View Slideshow
6 Images
Advertisement
Since then, Brittain has become one of the sport’s most respected—not to mention innovative—documentarians. In 1983, he co-founded the influential Transworld Skateboarding magazine, where he spent some 20 years at the helm of its photo department. There, he captured the dawn of professional skateboarding in Southern California, whose style and culture laid the groundwork for the burgeoning international skate scene. Some of his most striking photos show a tweenage Tony Hawk mastering every trick in the book.
Beyond deftly capturing action shots, Brittain was also one of the first to train his lens on the landscape and culture that buoyed skating. “We wanted to evoke a different side, another dimension, of skateboarding. This thing could take you places,” he’s said of his more atmospheric shots of city streets and empty skate bowls. “It was a welcome break from shooting action and an opportunity to contextualise the characters and draw out the true beauty of skateboarding.” 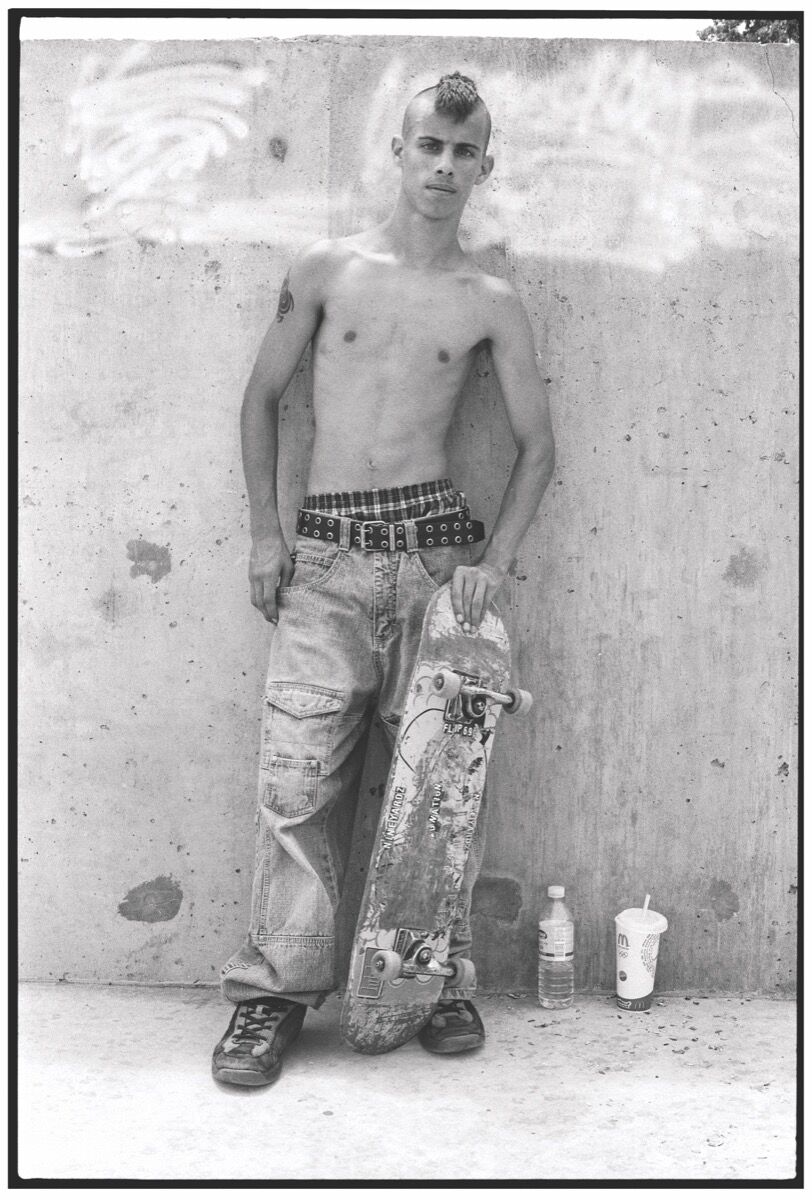 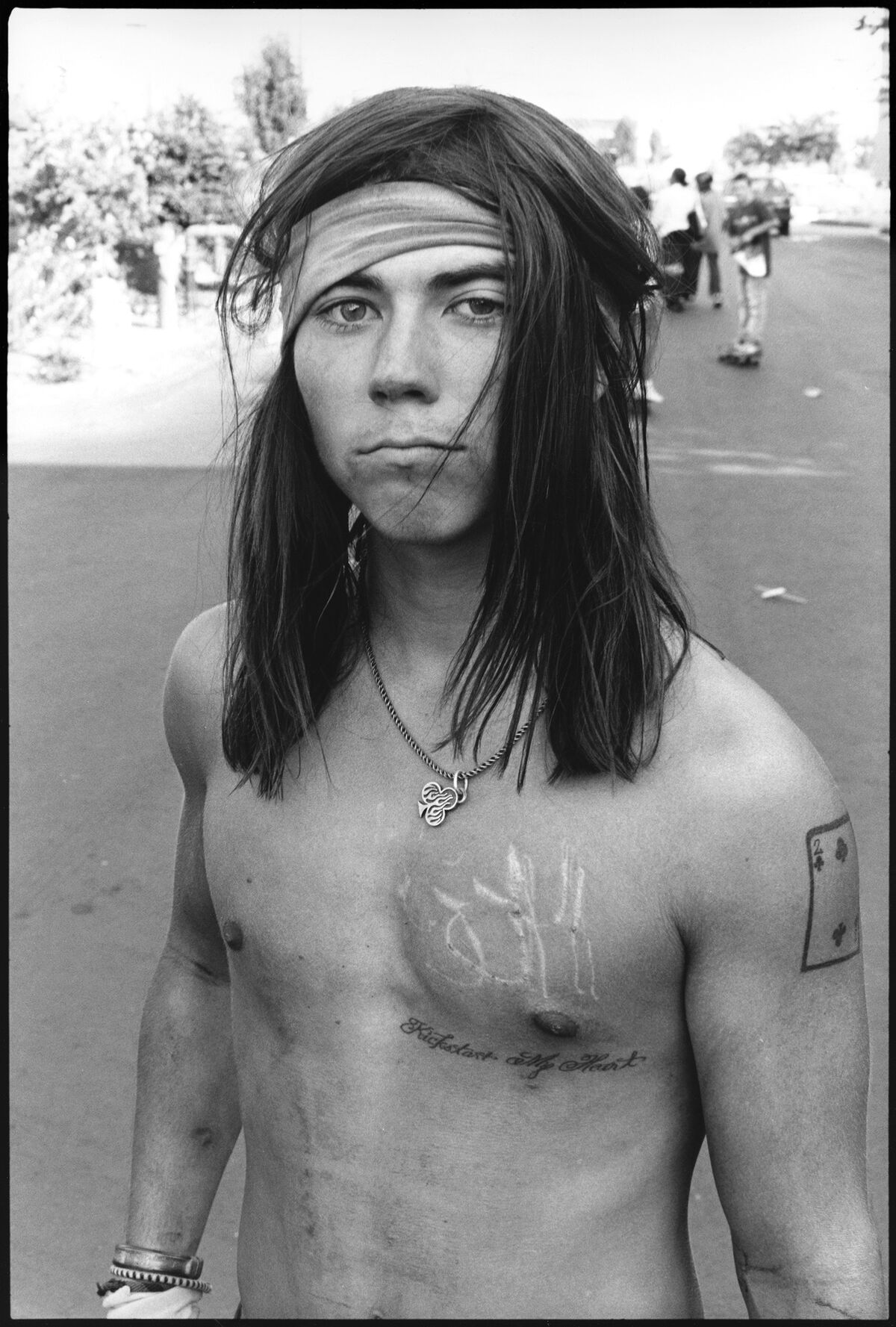 In 1994, four years into his career as a professional skateboarder, Ed Templeton realized he was missing an opportunity to document the subculture that surrounded the sport he loved. Soon, he was carrying a camera wherever he went, photographing his friends as they skated, smoked, wreaked havoc in hotel rooms, and wiped out across the globe.

Ed Templeton
View Slideshow
7 Images
“The stuff you hear about happening on music tours is the same kind of stuff that happens on skateboard tours,” he’s said. “I tried to shoot that.” The photos that result show young men and women living recklessly and rebelliously. Cigarettes dangle from their mouths; gashes on their foreheads drip blood; and their lips lock in hungry, messy makeout sessions.

A native Californian, Craig Stecyk was one of skateboarding’s first documentarians and captured the fast-developing sport with brutal honesty. His most famous shots track the Z-boys (short for Zephyr team), who became the era’s most notorious and gifted skaters. In a series of 1970s features for Skateboarder magazine, dubbed the “Dogtown Articles” (after the nickname for Venice Beach), Stecyk pulled back the curtain on the Z-boys and a new era of skateboarding that was defined by rebelliousness, inventiveness, and individual style.
“Skaters by their very nature are urban guerrillas,” he wrote in one of the texts that accompanied his images. “They make every day use of the useless artifacts of the technological burden, and employ the handiwork of the government/corporate structure in a thousand ways that the original architects could never dream of.” Stecyk went on to write the script for the 2001 cult documentary Dogtown and Z-Boys. He still shoots skate and surf culture today. 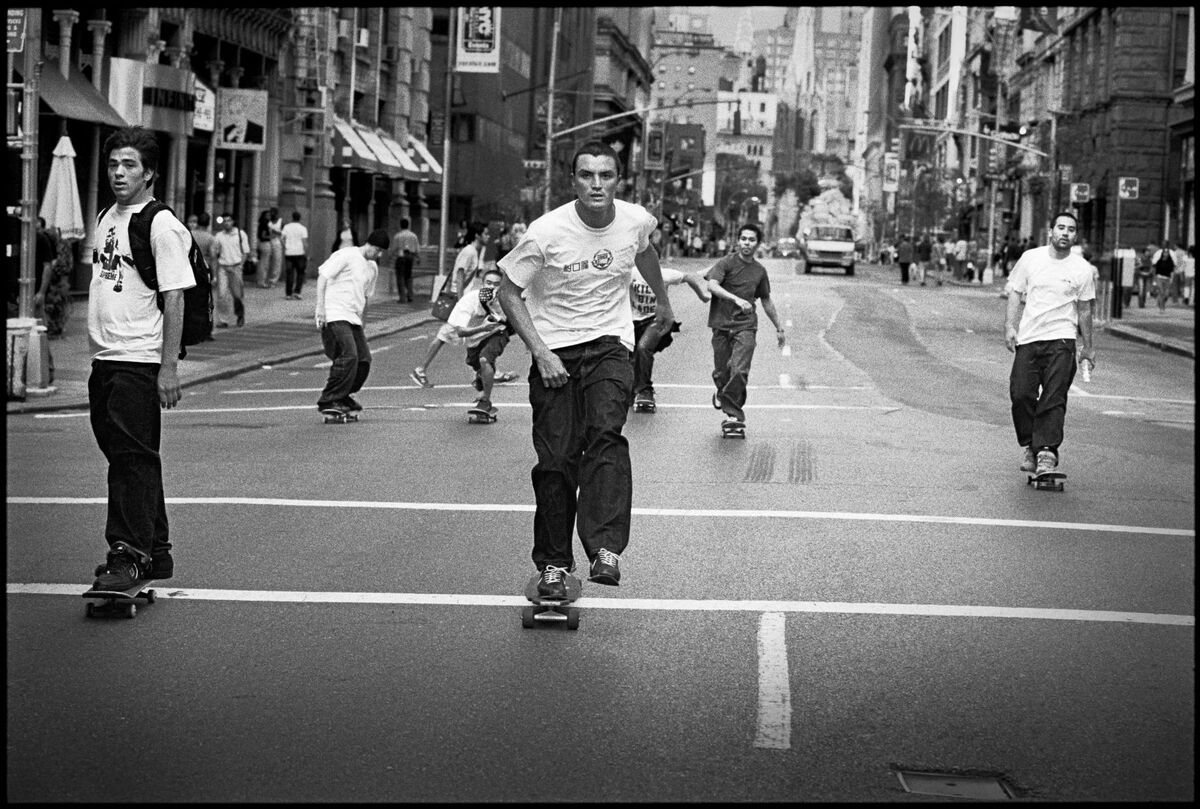 It wasn’t until after Australia native Mike O’Meally was gifted a pink skateboard, at age 12, that he really dove into the sport. Inspired by the skate mags he’d collected as a kid, he started shooting his crew and, by his late teens, was publishing in the same magazines he’d coveted. “I was like, ‘This is alright,’” he remembered, modestly, of his early success. “I basically chomped at the bit ever since.”

Mike O’Meally
View Slideshow
10 Images
Now based out of Los Angeles, O’Meally has been documenting skateboarding and its surrounding culture for over 25 years. His images often show solo skaters hurtling ecstatically down railings and gliding through empty streets. Sometimes, his subjects latch themselves to the side of cars—a trick known as skitching—for an extra thrill.
O’Meally is also adept at depicting his subjects in the context of the cities they use as skate parks. “As a photographer you’re not just shooting gymnastics where it’s all routine,” he’s said. “The moves can be the same, a lot of skaters skate the same, but the spots are different or the gear is different or the weather is different.” In images shot from a bird’s eye view, he’s chronicled skaters as they roll nonchalantly through the busiest intersections of New York and L.A. 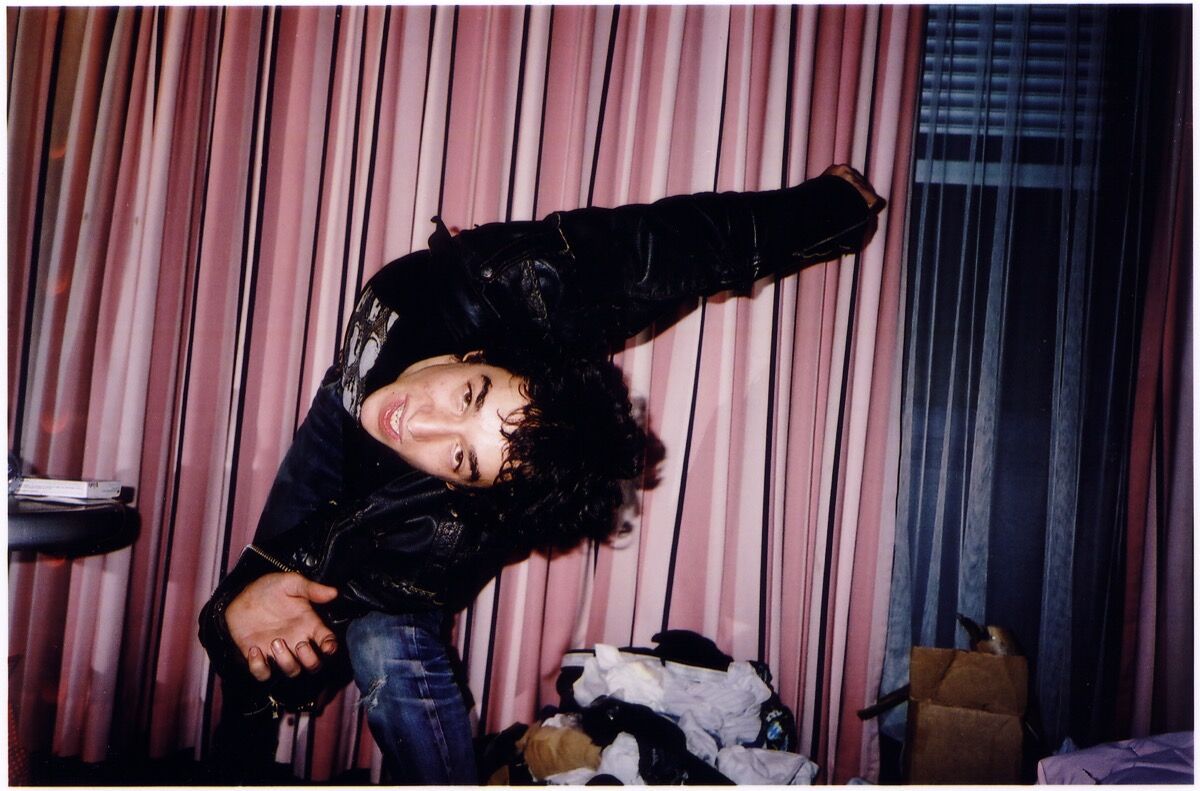 It was the 1985 sci-fi film Back to the Future that first inspired the St. Louis-born, Los Angeles-based Patrick O’Dell to skate. In one scene, the movie’s protagonist, Marty McFly, escapes his nemeses by hopping on a board.

Patrick O’Dell
View Slideshow
8 Images
From a young age, O’Dell merged his love of skating and photography. By the time he landed in San Francisco for art school, he was shooting his friends as they mastered tricks like the switch crooked grind, in the case of Karl Watson, or a backside lipslide, in one image of Lennie Kirk.
While O’Dell’s action shots are impressive, he actually prefers shooting portraits of his skater buddies, and snapshots of their rowdy, borderline-lawless lifestyle. It’s these images that fill his famed early-2000s blog-meets-photo project Epicly Later’d, which showed his community partying hard across downtown New York or skating through its chaotic streets. Often, the posts were embellished with funny, albeit intimate captions like “Cam has really long fingernails” or “Danny, Phil and Jay…trouble.” In 2001, O’Dell turned the series into a documentary show on VICE; these days, his films dig deep into skate culture’s most influential forces, from famed skaters like Ali Boulala to important industry rags like Big Brother. 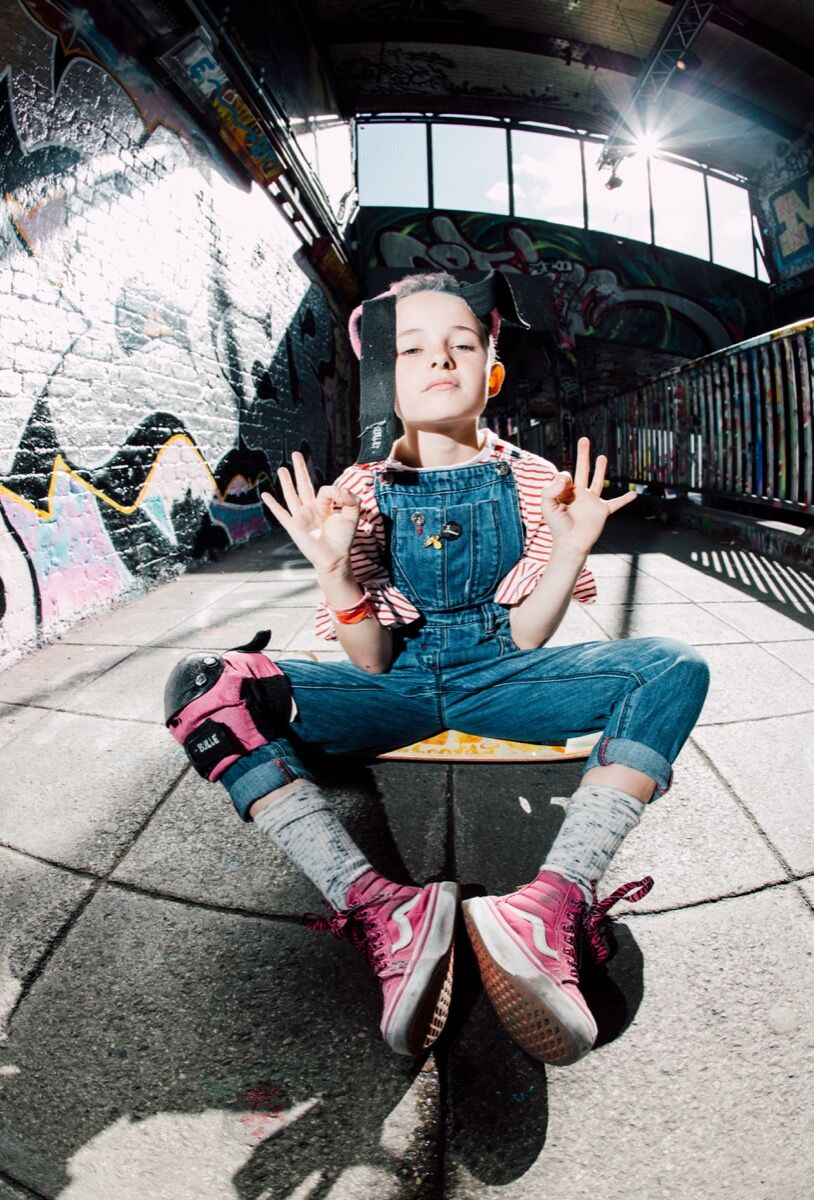 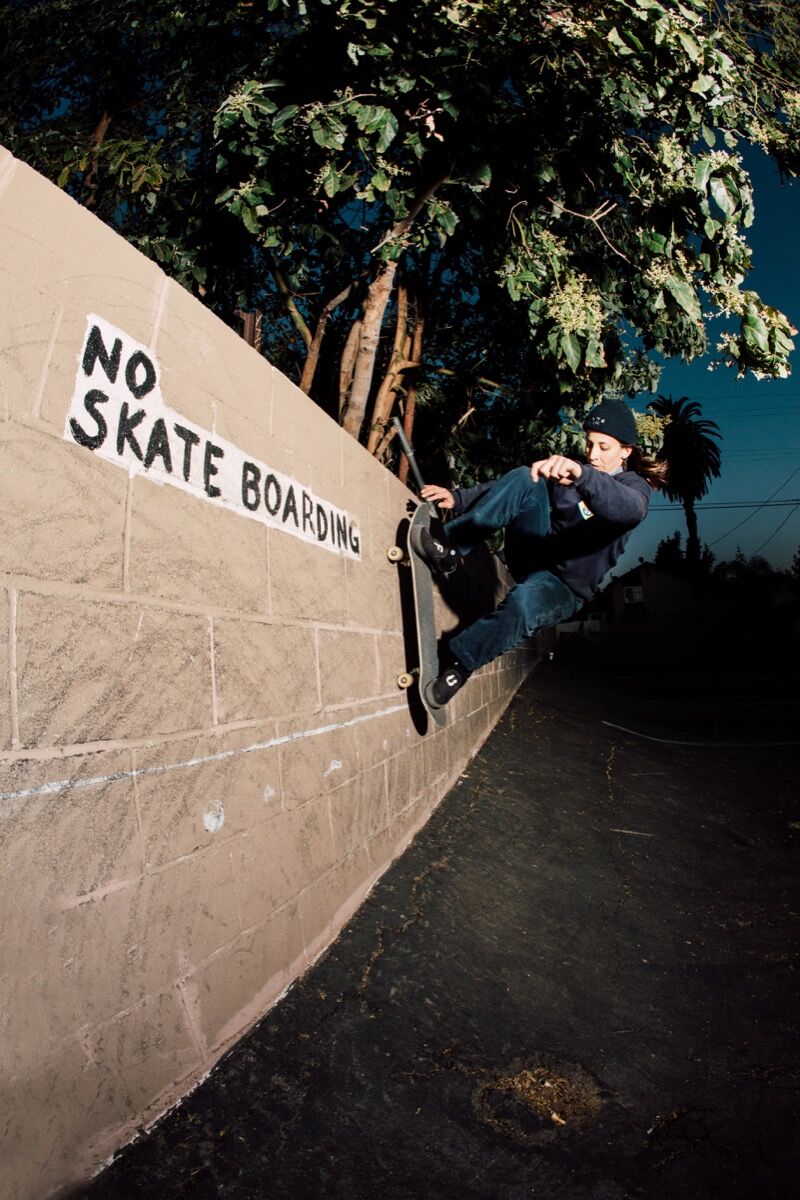 Twenty-something photographer Zorah Olivia got an early start. The Baltimore-born, Los Angeles-based artist received her first skateboard at age 10 and began shooting professional skaters at age 16, when she snagged her first pro subject: the young Californian Mike Mo, known for his mastery of the 360 flip.

Zorah Olivia
View Slideshow
8 Images
Since then, she has strived for the perfect moment “when a skater lands their trick and I get the shot at the same time,” she has said. Now, at 24 years old, Olivia has built a reputation as one of the go-to documentarians of extreme sports, shooting high profile competitions like Nike’s Street League and ESPN’s X-Games. Both her action shots and portraits are taken up close to emphasize the athleticism and individuality of each of her subjects. Some of her strongest images are of female skaters, a community that historically has been sorely underrepresented by skate photographers. 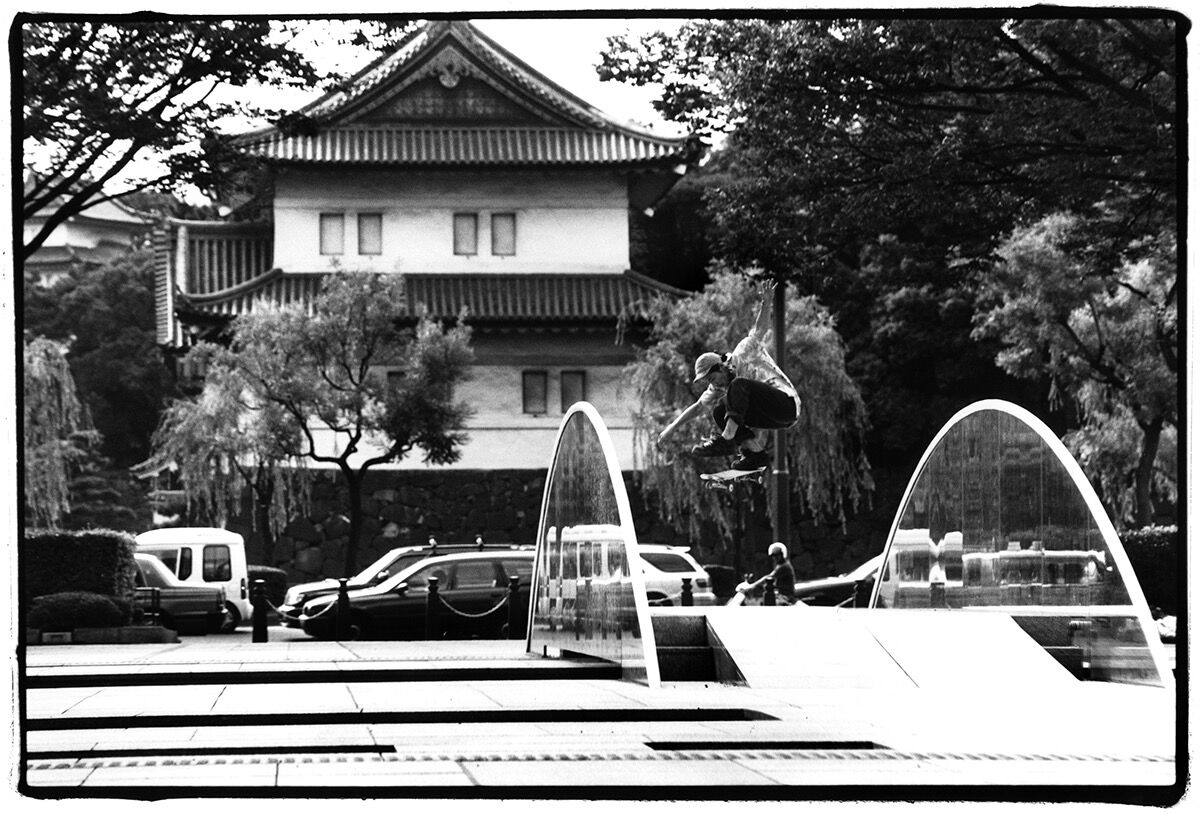 It was on a series of trips to New York City in the 1990s that Japanese photographer Yuri Shibuya began documenting her surroundings. Then a Tokyo-based design student, she closely observed Manhattan’s street life and the busy corners where teenagers and skater kids loitered. It wasn’t until a hungry pro-skater named Quim Cardona asked Shibuya to take his photo while doing an ollie, however, that she began chronicling downtown Manhattan’s thriving skate culture.

Yuri Shibuya
View Slideshow
7 Images
Since then, Shibuya has documented skate communities around the world, focusing on New York and her native Tokyo in particular. The black-and-white images that result show groups of exuberant young things as they trace the edges of public sculptures, bike racks, and playground structures with their boards. Some of her most intimate and striking images also show her skater-subjects at rest, smiling big and hanging out together in parks, with the city’s skyscrapers and bodegas as their backdrop. “I don’t shoot people doing tricks for skateboard magazines,” Shibuya has said of her work. “I’ve always been more about documenting their life.” 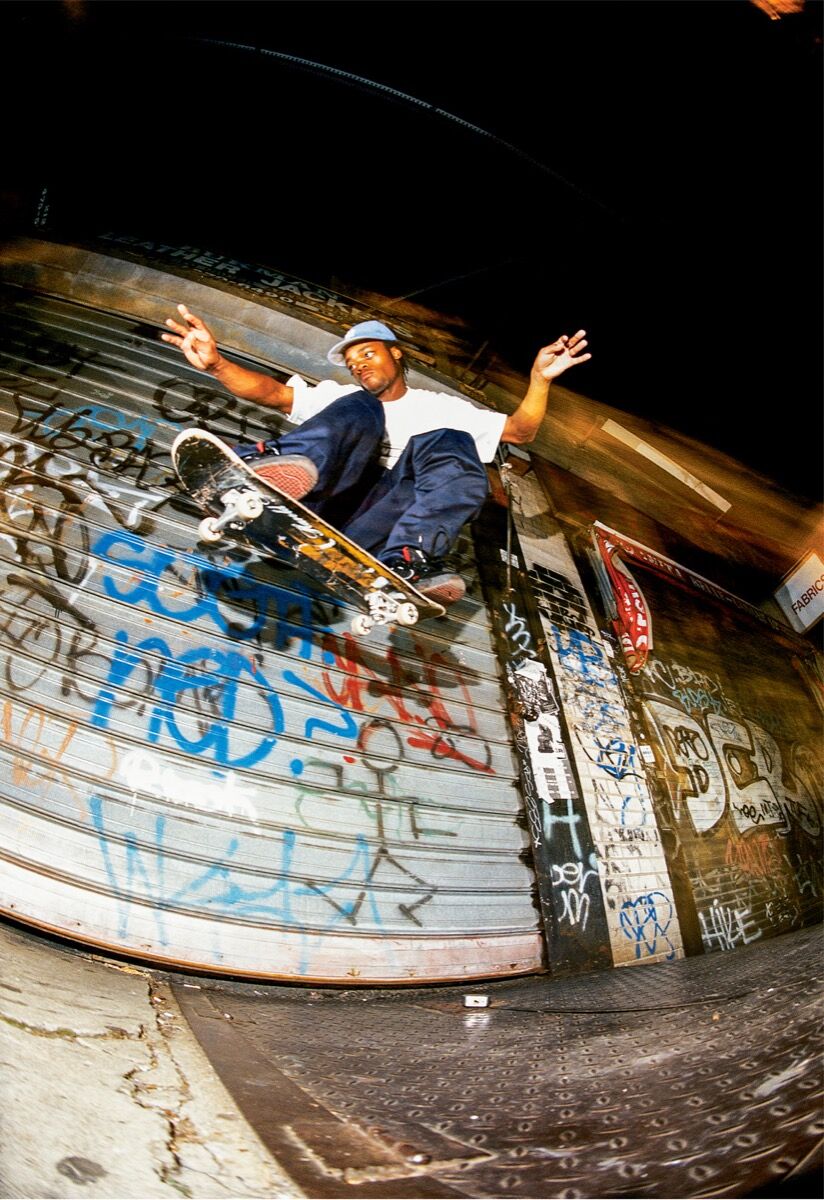 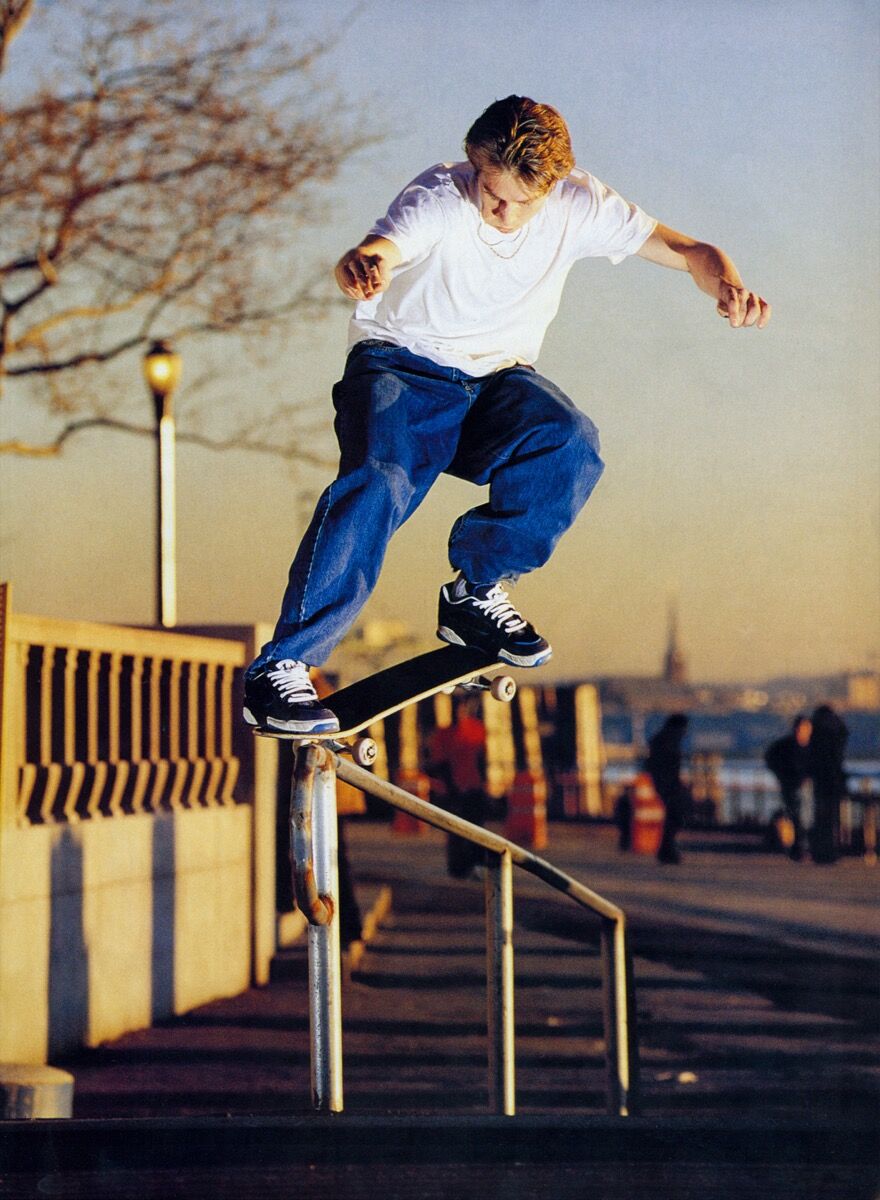 Giovanni Reda has a knack for harnessing the energy and exuberance of skating. His images are saturated with bright colors that emphasize the sport’s inherent athleticism and adrenaline. Often, he photographs his subjects hovering in mid-air as they prepare to polish off a trick.
Reda got his start in New York in the 1990s, after he was gifted a camera for his 20th birthday. In one image from 1998, he captures the late, great skater Harold Hunter as he flies off a Lower East Side cellar door. “I was shooting someone else doing a trick on this bump, and Harold was popping the most stylish looking ollies, so I had to shoot one,” Reda told Artsy. 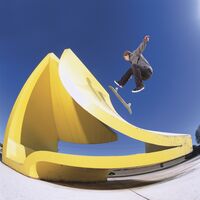 Giovanni Reda
View Slideshow
4 Images
Since then, Reda has shot for all the major skate magazines—Thrasher, Transworld, and Big Brother—and has traveled around the world chronicling the pros. In recent years, though, he’s shifted his focus to the moving image. His intimate 2016 documentary portrait of pro-skater Brian Anderson received rave reviews; during the film, Anderson came out as gay—a rare statement for a pro male skater to make.
Reda’s other films also emphasize the humanity of skate royalty. Most recently, Reda released a short film about pro skater Nora Vasconcellos, the first female rider to join the global Adidas skateboarding team. In it, Vasconcellos faces the challenges of being a successful woman in a male-dominated sport.
Alexxa Gotthardt
Related Stories

Photographers Who’ve Captured the Camaraderie and Solitude of Surf Culture 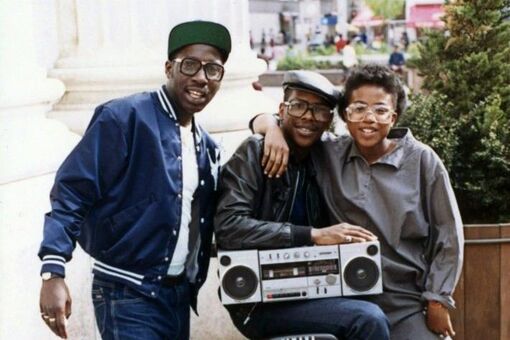 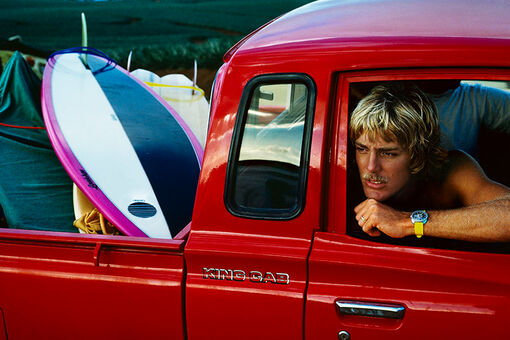