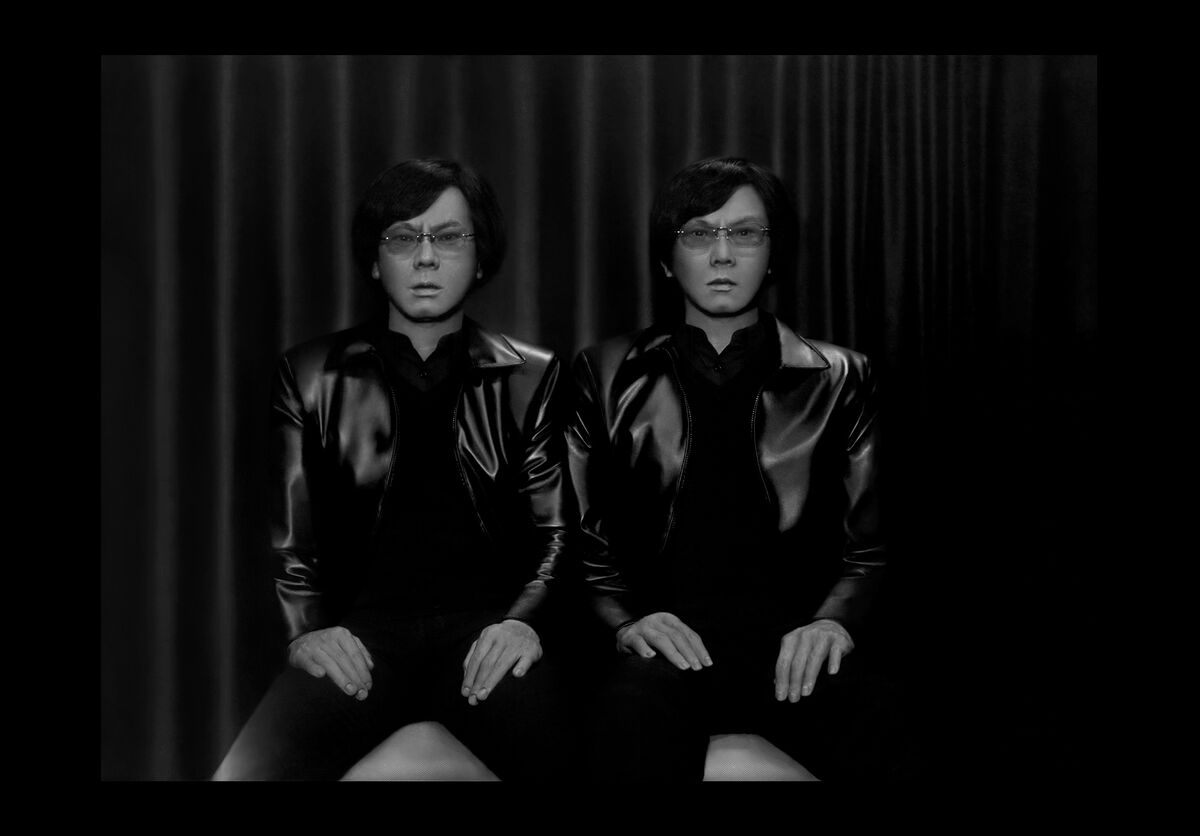 The Japanese poet and novelist Natsume Sōseki is still giving lectures today at the same university where he was teaching before he died—102 years ago. He’s been resurrected in the form of a fully-equipped android, who speaks with his own voice (using preserved recordings), wears facsimiles of his former clothes (including his 19th-century shoes), and is capable of engaging in ad hoc conversation.
“Sōseki is a very, very nice robot, a beautiful robot,” says the Flemish artist Wanda Tuerlinckx, who created a haunting portrait of the robot last year using a large box-like camera similar to those that existed during the human Sōseki’s lifetime. “He’s so unbelievably real. The way he moves, when he looks at you and how he blinks, you really have to take a moment to think: Is this a man or a robot?”
Tuerlinckx is fascinated by that moment of recognition (and potential revulsion) when people encounter a very life-like robot for the first time. In robotics, that moment has a name: the uncanny valley. 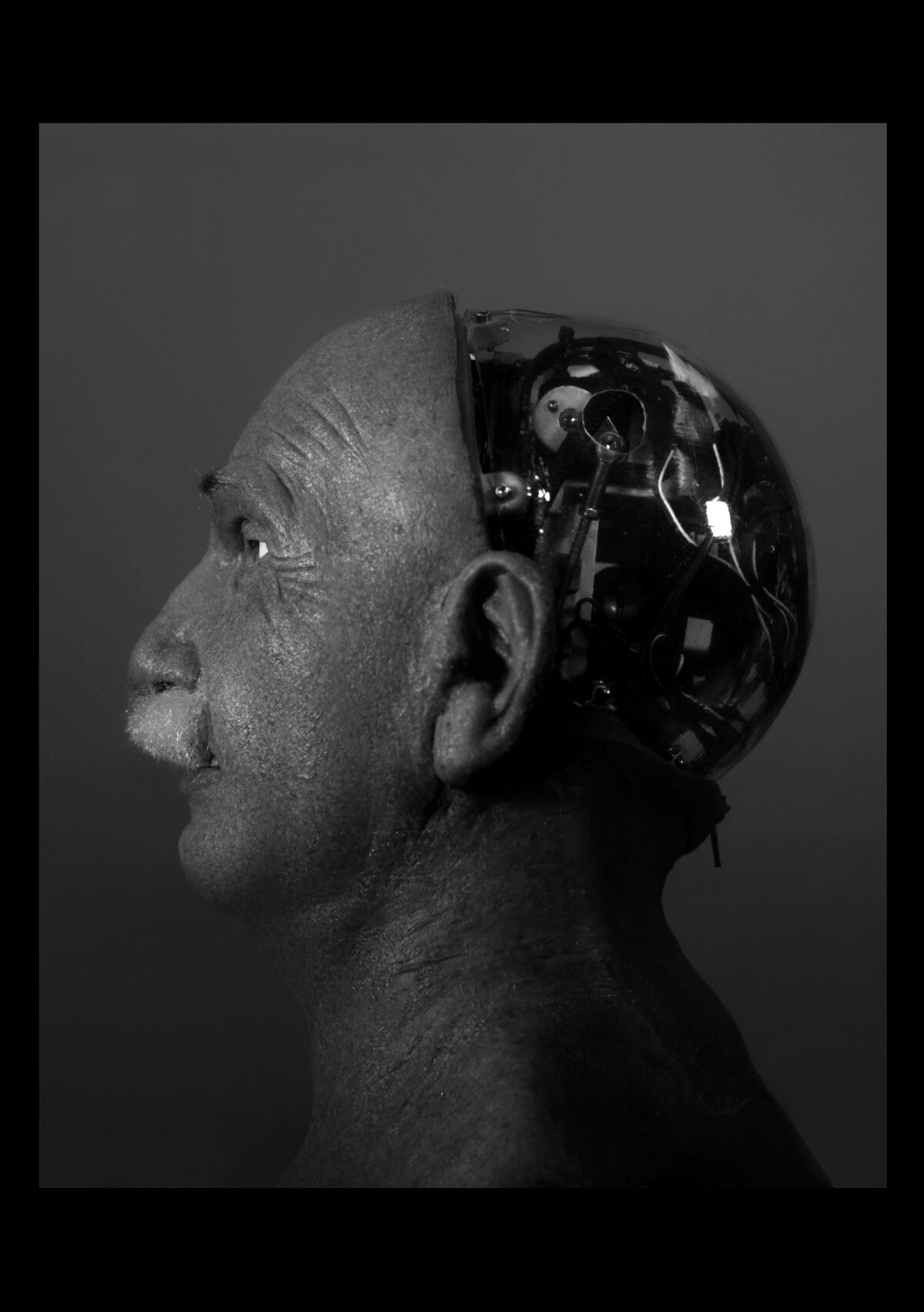 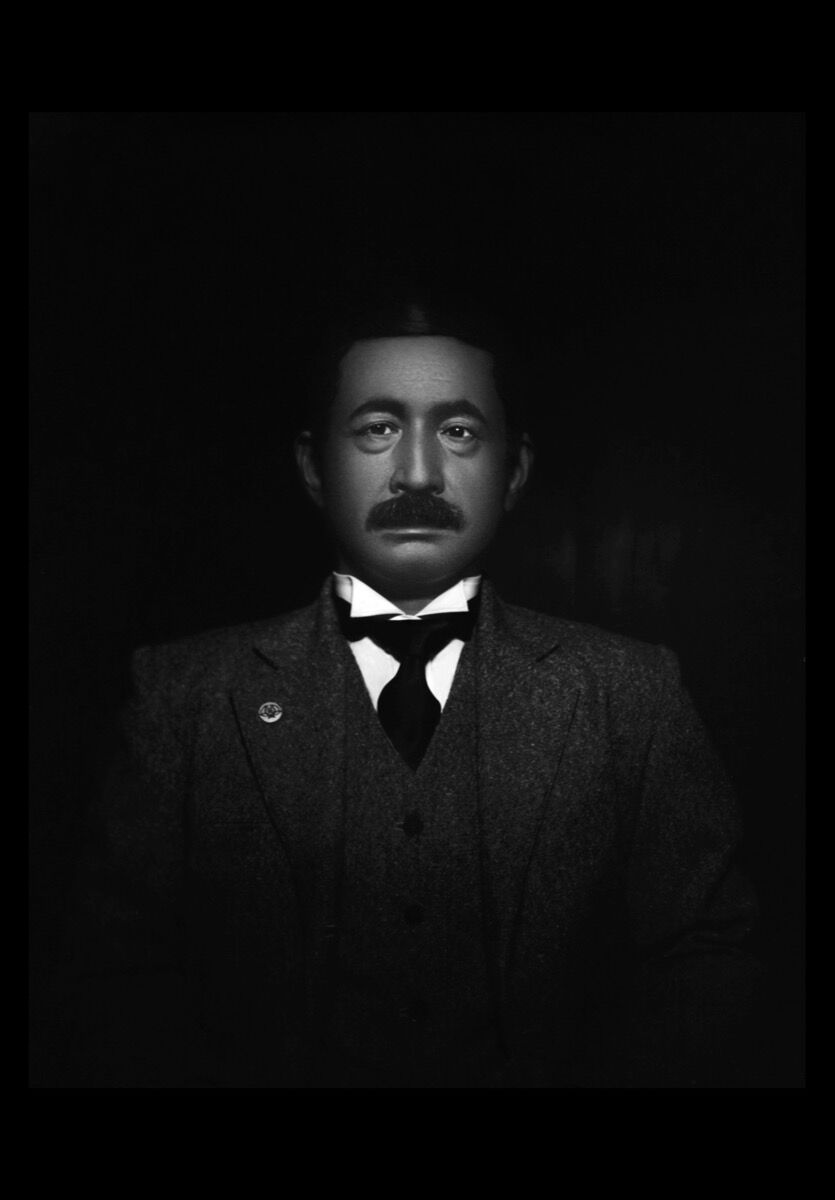 “The first time I heard it, I was very curious,” said Tuerlinckx during an interview in Amsterdam, where she lives and works. “‘The Uncanny Valley’ sounded like the name of a cult movie or something. When it looks human and behaves like a human, but there is this little imperfection, that makes people feel weird. They don’t want that. They would like people in the future to work with robots, and they don’t want them to be disgusted by them.”
Since 2015, Tuerlinckx has been traveling the world with her Victorian-era camera to meet humanoids, robots, and androids of all kinds, shooting them for a series she calls “Robot Portraits.” From June 9th through September 23rd, she will present eight of these photographs at Rotterdam’s Museum Boijmans van Beuningen as part of the group exhibition “Anima Mundi,” which explores how people become emotionally attached to the human form in art.
Tuerlinckx bought her 19th-century camera a few years ago from a little shop in a small Dutch town that was about to go out of business. It is a rare portable version of one of the world’s first photographic devices, a calotype camera, originally introduced in 1841: essentially a large wooden box, or camera obscura, that produces a negative on a sheet of paper coated with silver iodide.
After playing around with it for about a year, taking vintage-style portraits of friends, she decided that the ideal usage of her old-fashioned technology would be to document today’s cutting-edge technologies.

Advertisement
“Robot Portraits” is a project that Tuerlinckx plans to be engaged with for the next two decades or so, a time during which, she predicts, “robots [will] become more and more integrated into our lives.” So far, she has taken around 100 portraits, which range from images of purely functional machinery (mechanical arms and prosthesis) to surprisingly true-to-life androids that talk and behave like humans, such as Sōseki.
She has photographed some of the world’s most famous robots, such as Hanson Robotics’s Sophia: a fashion model, journalist, and the first robot to ever attain citizenship status (in Saudi Arabia). Tuerlinckx has also photographed Geminoid HI-4, a robot replica of the Japanese robot inventor Hiroshi Ishiguro, director of the Intelligent Robotics Laboratory at Osaka University. In the photo, Ishiguro is seated beside his robot clone—who gives lectures as Ishiguro when he is unavailable—wearing exactly the same clothes, as they often do. The two are indistinguishable.
Shot with the antique camera, her photographs have a soft, warm aspect to them, adding a sense of contemplativeness, even soulfulness, to the robots. This is particularly true in the case of one robot, simply named Android, that Tuerlinckx encountered leaning against a wall in Ishiguro’s laboratory; her eyes don’t look directly at the camera, but off slightly to the distance, as if she’s pondering something ineffable.
This is where her photographs enter into the realm of the uncanny valley. “There’s a kind of imperfection in the technique itself,” she said. “It’s this combination of the old portrait camera and the robots that gives it a kind of life, a kind of soul, more than you could ever have with a digital camera.” 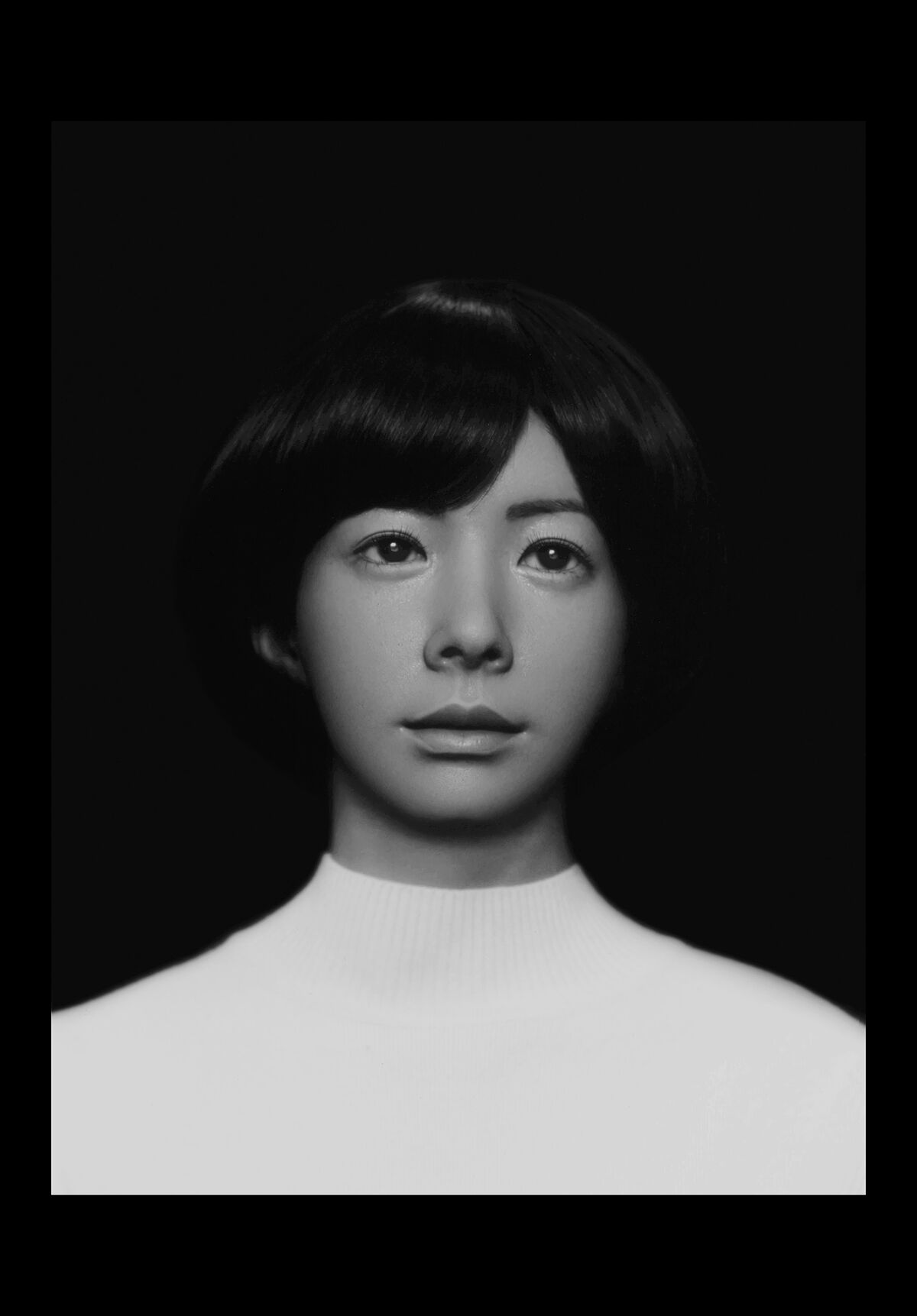 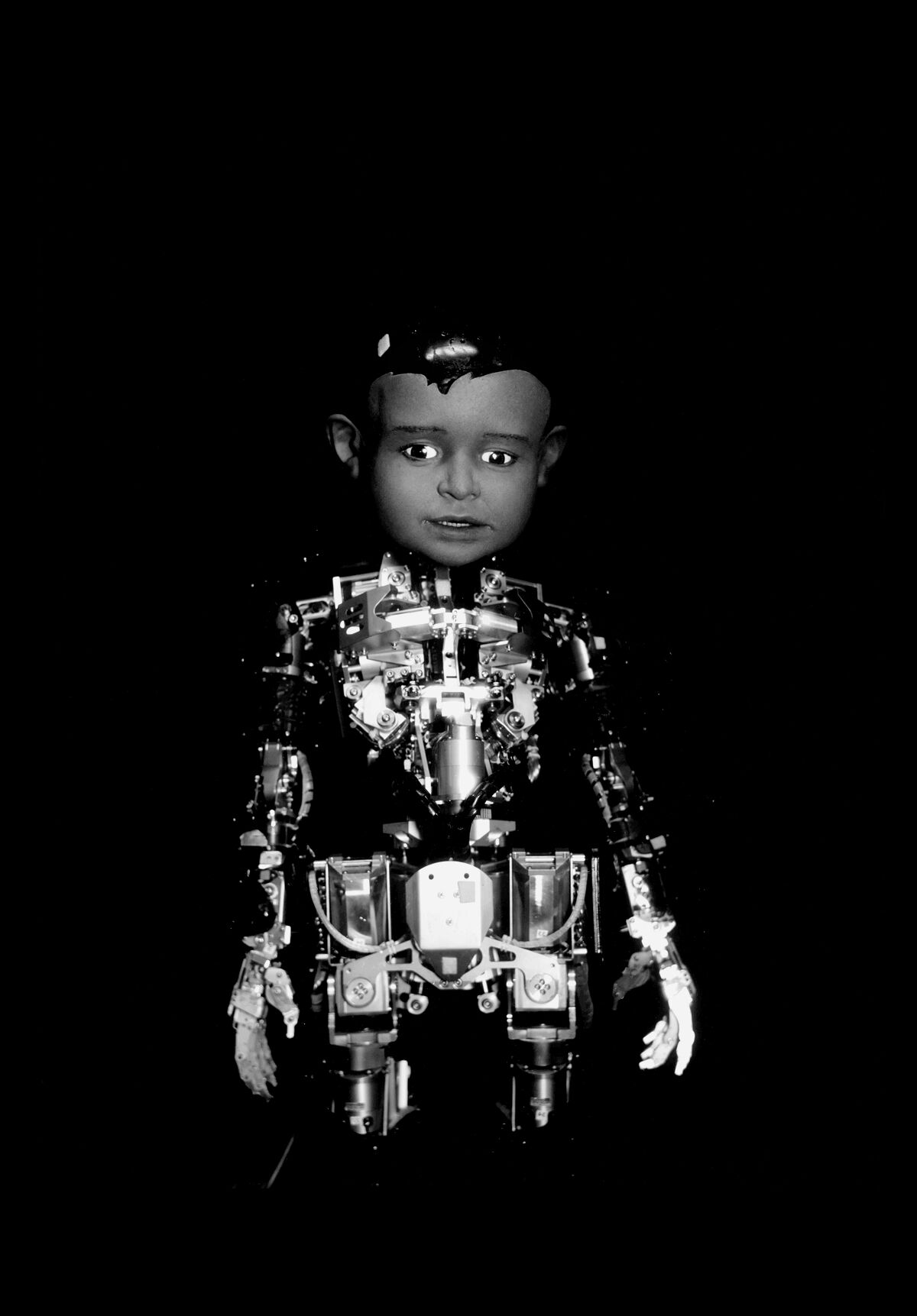 Some of her early images were taken at the Delft Institute of Technology’s Biorobotics lab, where she photographed robots like Flame, which has elastically actuated hips, knees and ankles and the ability to walk sideways, but no humanoid characteristics.
One of the professors there, Erwin R. Boer, introduced her to the University of California, San Diego’s Machine Perception Laboratory, led by research scientist Javier Movellan. Together, Tuerlinckx and Boer headed to the West Coast of the United States with her giant camera. There, she met her first human-style android: Diego-san, a child-like robot that stands about four feet tall and has the face of a one-year-old boy.
Diego-san has a mechanical body, designed by Japan’s Kokoro Co., and a humanoid face, designed by the pioneering roboticist David Hanson. He makes what he calls “emotionally relevant” robots, which express themselves with gestures and facial expressions—Hanson’s bid to bridge the uncanny valley. The boy android is capable of smiling, laughing, responding to questions, and becoming angry or sad.
Tuerlinckx photographed this range of emotion, and found the experience of being with Diego-san very poignant.
“I really had a warm feeling with him,” she recalled. “He’s so cute and he has this really big head, and it’s surprising how he can express all this emotion. He was, for me, like a very special child. He has a lot of character. I was very emotional with him. I always tell Erwin—if they’re not using him anymore, he can come live with me.”
Nina Siegal
Related Stories