Photographs of Black Dandies Highlight the Power of Style 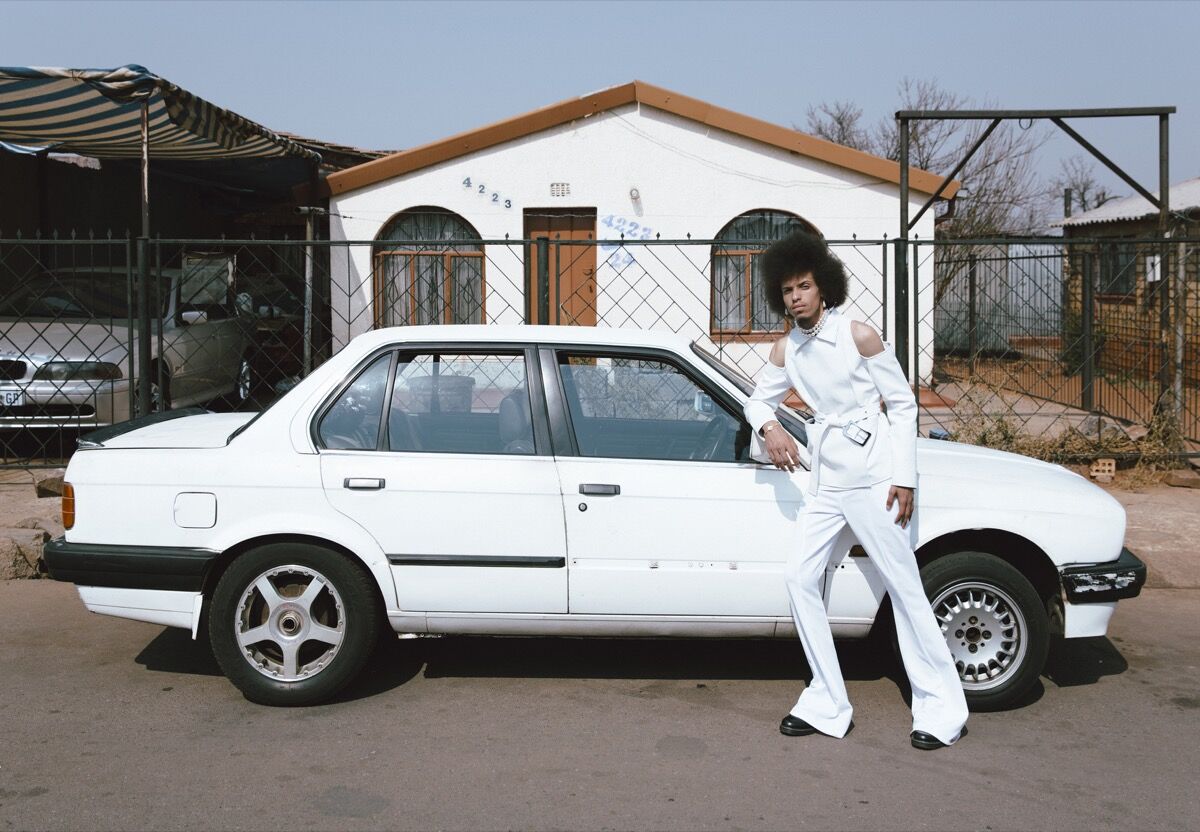 “For me, clothes have always been political,” says Ekow Eshun, curator and former director of the Institute of Contemporary Arts, London. We’re speaking over the phone, discussing “Made You Look,” the new exhibition he’s curated at The Photographers’ Gallery, London, which was unveiled to the public on Friday. The exhibition explores black dandyism through photographs by nine artists from the U.K., U.S., Mali, Morocco, Cameroon, and South Africa.
The social and political uses of style as a way to subvert conventional notions of blackness and maleness is something that has preoccupied Eshun throughout his career: He spent more than a decade working as an editor at cult British fashion magazines The Face and Arena, and has written and spoken about the subject extensively. Growing up in a Ghanaian family in London, Eshun quickly became aware of the paradox of being a black man—being invisible and hypervisible at the same time. “I understood from an early age that as a black man, you have to think about the way you dress,” he says. “I realized that I had to dress in a certain way, in order to be looked at in the way I wanted to be seen. You’re looked at much more, and you have identities vested upon you. Style is much more than clothes alone.” 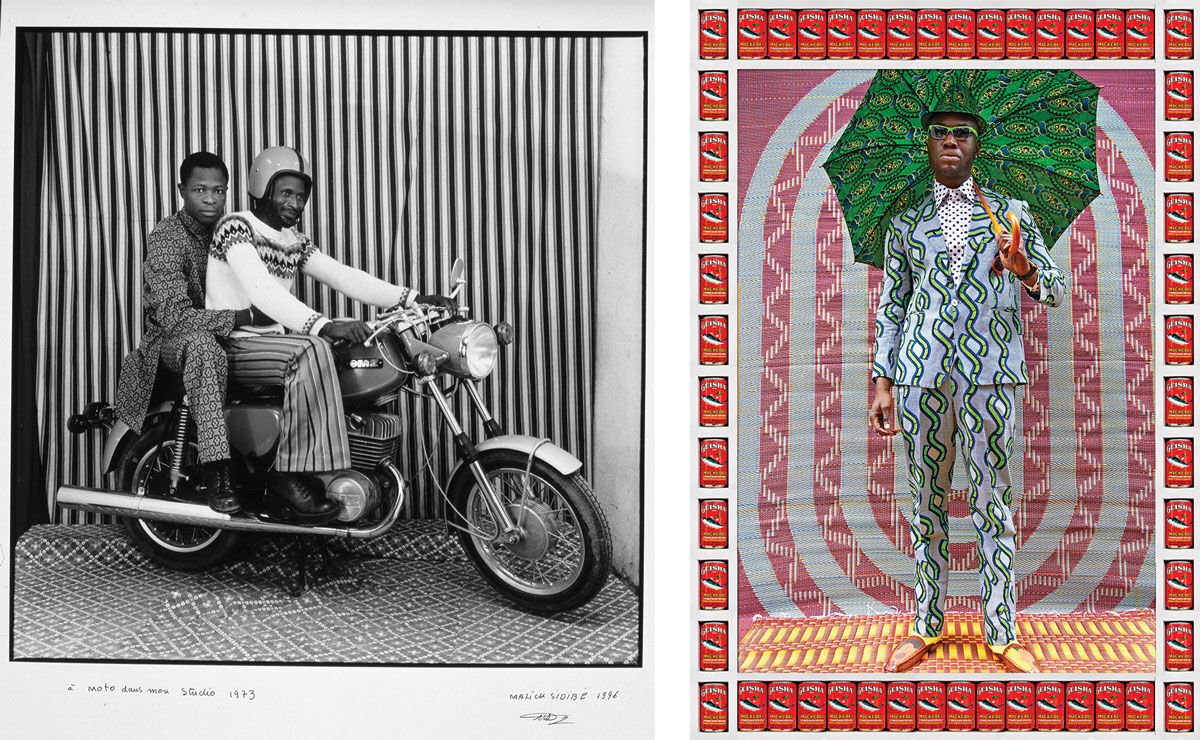 The exhibition traces a trajectory of black dandyism in the 20th and 21st centuries, defined not as a style but as an approach to using dress as a refutation of a single construction of black masculinity. While spanning continents and decades (the show includes works from 1904 to 2016), it isn’t intended as “a historical presentation,” Eshun says. “The images are not all the same; you have some that are louche, romantic, camp… but there are things that repeat.” Palpable among things that repeat are reminders of the will for resistance, as much as the need for it. The exhibition inevitably alludes to Trayvon Martin, who was fatally shot in 2012 while wearing a hoodie.
Posited as a celebration of the power of individual style to counter the specific narratives forced upon black men, “Made You Look” makes us consider questions around the complicated role of photography in both defining and denying black self-image—something that Eshun has undoubtedly been conscious of as someone who influences visual culture in the U.K. as a journalist and broadcaster. “The camera is an important democratic tool, especially for black men, who historically have been portrayed as object, from the outside,” he explains. The camera has long been used against black men—as a tool of colonial oppression, turning the black man into an object of anthropological study, the “other,” which is persistent in images of violence and brutality against black males in the media today. At times, those images have been used to galvanize activism—the image of Emmett Till’s battered body, photographed by David Jackson, was pivotal to the Civil Rights Movement, as much as today’s footage of the recent murders of Walter L. Scott, Tamir Rice, and Eric Garner, among others, is to the Black Lives Matter movement. At the same time, the recent viral storm around “three black teenagers” Google search proves that photographs are still defining black men first and foremost as criminal, dangerous, and malevolent. “Made You Look”—especially in the context of the U.K., where there is a distinct lack of education on black British history and culture—is as much about the way we look at and consume images as about reclaiming the definitions of black masculinity in a positive light.

Advertisement
Eshun has brought together images that reflect striking moments of independence, where black men take ownership of their image. Eshun picks out the work of Liz Johnson-Artur, a Russian-Ghanian photographer who Eshun first met while working at The Face. “There’s an incredible empathy in those images—it was very important to me to have that in the exhibition, to move from objectivity to subjectivity,” Eshun notes. Meanwhile,
Colin Jones
’s photographs of Afro-Caribbean youths in Britain in the 1970s complicate questions around cameras capturing black men. Jones was commissioned by the Sunday Times Magazine in 1973 to show the disempowered young men who were living in a social ghetto in Islington, North London. The resulting series, “The Black House”—shot between 1973 and 1976, and later exhibited at The Photographers’ Gallery, in 1977—in fact became a collaboration with these men, whereby they took control of their disenfranchised image and reasserted their marginalized status. “They were an expression of self-independence, that really comes through in the images,” Eshun says, “you can see this defiant, proud expression, this demand to be seen as they see themselves.”
Eshun points to the parallel with works on view by the late photographer
Malick Sidibé
, whose portraits of post-independence Malians reveal style as an expression of a new sense of freedom at the time, and a crucial element in a new national identity. Sidibé’s works portray men who embrace both their modern Western and traditional west African heritage (visible in the clothes and props in Sidibé’s Bamako studio shots) to create something that was irrevocably their own. Eshun puts it well: “It’s not what they wear, but how they wear it.”
—Charlotte Jansen
“Made You Look” is on view at The Photographers’ Gallery, London, July 15–Sep. 25, 2016.
Related Stories