These Photographs Trace the Legacy of Protest in New York City 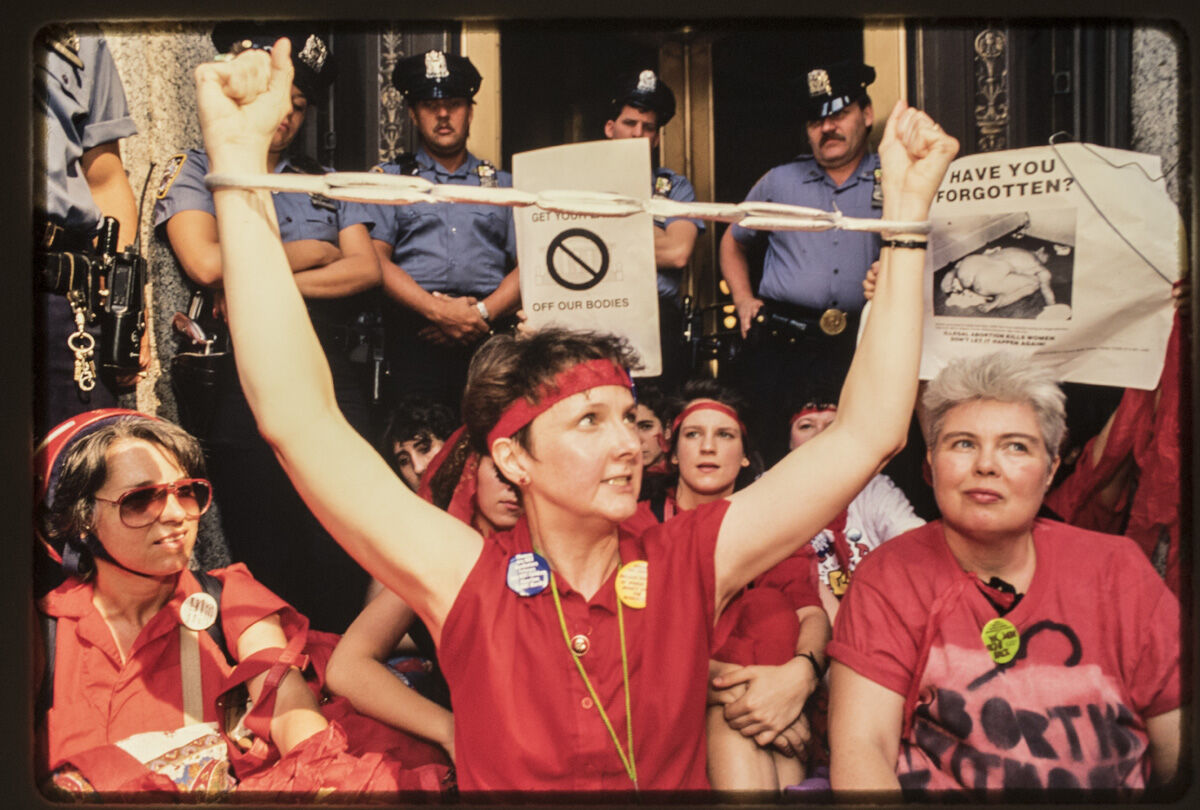 Imagine New York City gripped by demonstrations occurring every week or even every single day. And at those rallies are seasoned activists, but also individuals moved to act in the face of intolerable injustice. These protestors wield signs stamped “my body, my choice.” They are lifelong New Yorkers chanting “hell no, we won’t go” in the face of development and gentrification. Or they are students from the City University of New York (CUNY) standing up to budget cuts to the institution.
This picture is of New York almost two decades ago. If the descriptions ring true in the present, it is because issues of freedom of choice, public education, LGBTQ rights, gentrification, and racism—among many others—still animate activists across the political spectrum today.
An exhibition at the Bronx Documentary Center (BCD), titled “Whose Streets? Our Streets! New York City: 1980–2000,” brings together the work of 38 photographers (some of them who were also activists) whose dramatic images captured the struggles of this era in New York. They are required viewing for those who feel compelled by contemporary politics to step into the streets and make their voices heard.
“I’ve always felt good journalism and good information is the foundation of our democracy,” said co-curator and BDC co-founder Michael Kamber, who witnessed and photographed many of the protests firsthand. The show organizes the photographs into different themes, including protests over police brutality, AIDS, abortion rights, and culture wars—events that have been largely obscured by history. Today, they’re reminder of how bad things can get, and how people can come together to fight back. 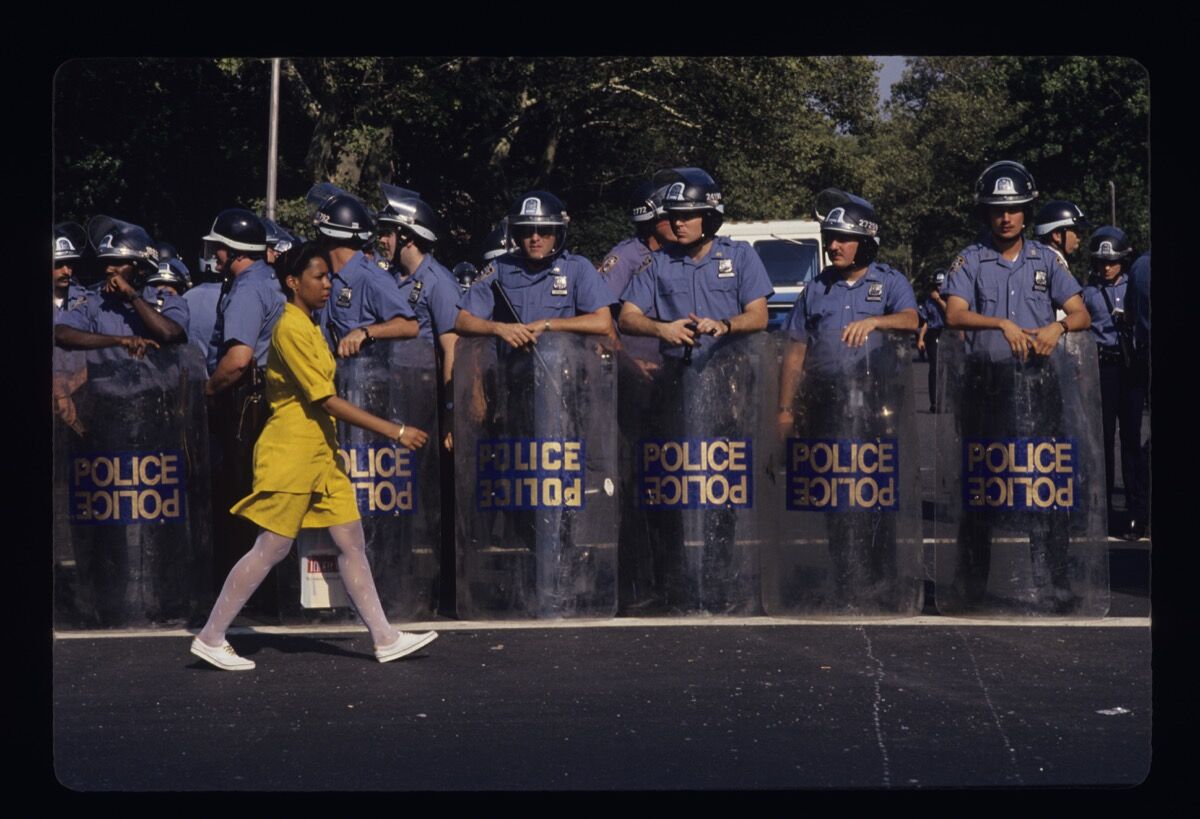 © Mark Peterson. Courtesy of the Bronx Documentary Center. Photograph taken during the Crown Heights riots of 1991.

Mark Peterson’s image of a young woman in a bright yellow dress crossing the street before a line of police officers in riot gear looks like something from the Civil Rights Movement of the 1970s. But it was taken during the Crown Heights riots of 1991, an event more recent if lesser-known to some New Yorkers.
The picture was snapped in the days after the motorcade (including police escort) of a Hasidic Jewish leader unintentionally struck two black children in the Brooklyn neighborhood, killing one and severely injuring the other. It was August, and the heat helped turn long-simmering resentments between African-American and Jewish residents to a boil.
Allegations charging that the ambulance that arrived shortly after the incident carted off a Jewish driver—but not the two young boys injured—fueled three days of fierce protests and riots in the neighborhood, in which Jewish residents and businesses were attacked. In showing a woman peacefully crossing the street right in front of a phalanx of cops, Peterson’s image reveals a sharp contrast between a normal act and seismic political events. 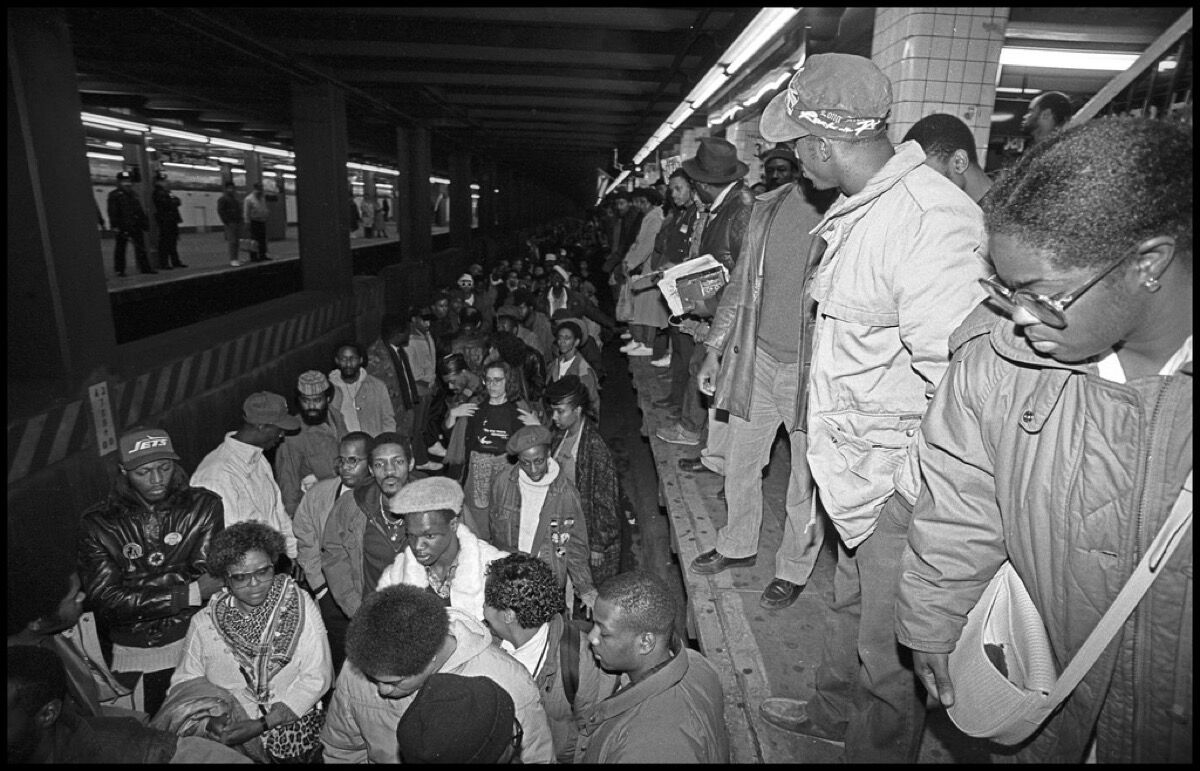 Advertisement
Ricky Flores’s photograph shows protesters standing in the tracks of the Jay Street and Borough Hall subway station (one of several stations and tunnels blocked), grounding traffic to a halt during 1987’s “Day of Outrage.” The demonstrations were related to a general anger with white authorities as well as the killing of a black man in Howard Beach a year earlier.
In a racially motivated attack, a gang of white youths chased 23-year-old Michael Griffith into traffic, where he was struck and killed by a car. Three of the attackers were charged with and convicted of manslaughter, and Flores’s photo captures demonstrations in the verdict’s aftermath.
This image of protesters flooding the subway station brings to mind photographs of those who flocked to John F. Kennedy airport to protest Donald Trump’s Muslim travel ban in January. In both instances, spaces not normally thought of as the public square became forums for dissent. Intervening in these highly populated areas made the subjects of the demonstration impossible to dismiss or ignore. 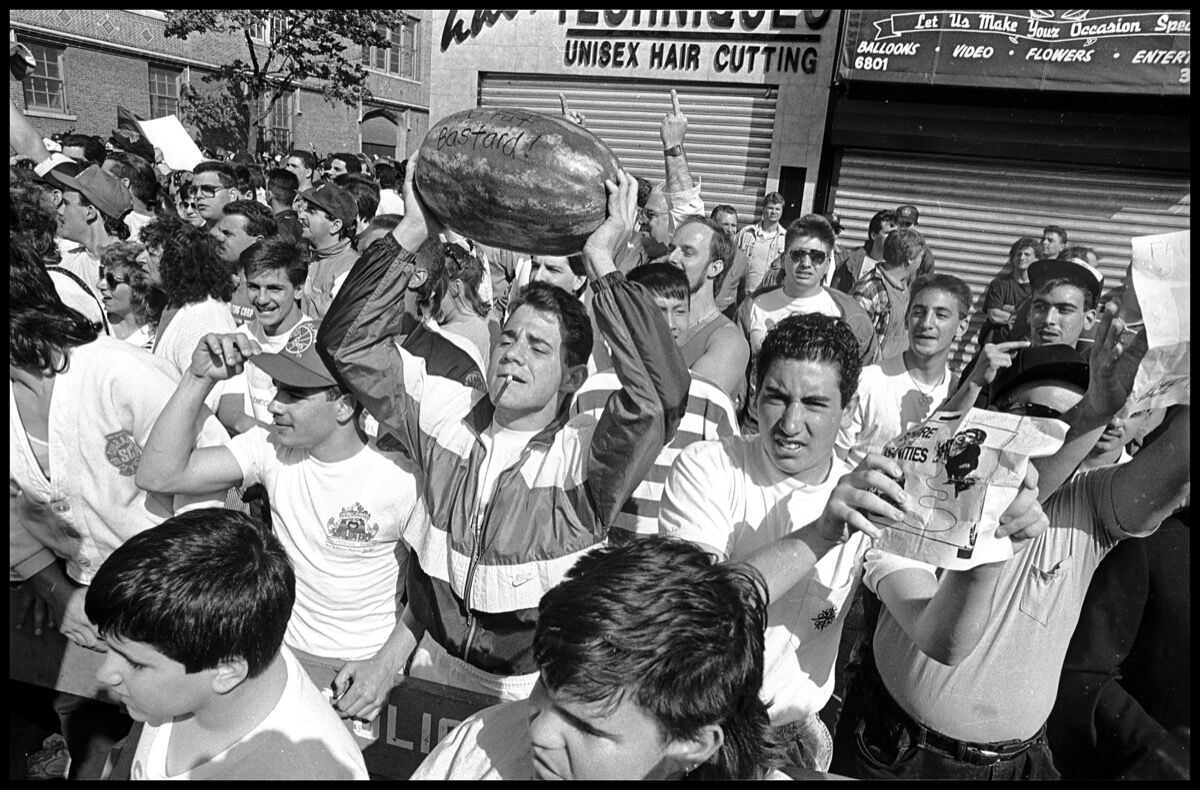 Bensonhurst, Brooklyn, 1989. A gang of white youths are roaming the streets, looking for African-American or Latino boys they suspect are dating a white girl in their neighborhood. Instead, they come across 16-year-old Yusef Hawkins. The white teens attacked him, beating him with baseball bats and shooting him in the chest twice, killing him.
This image by Flores sees white New Yorkers rallying under racist signs; One of them is poised to throw a watermelon at African-American marchers just off camera. Flores shot the picture after Keith Mondello, one of the teens charged with killing Hawkins, was acquitted on charges of manslaughter (he spent time in jail on related charges). African Americans took to the streets of Bensonhurst in fury and grief. The mainly Italian white residents gathered to jeer and taunt. 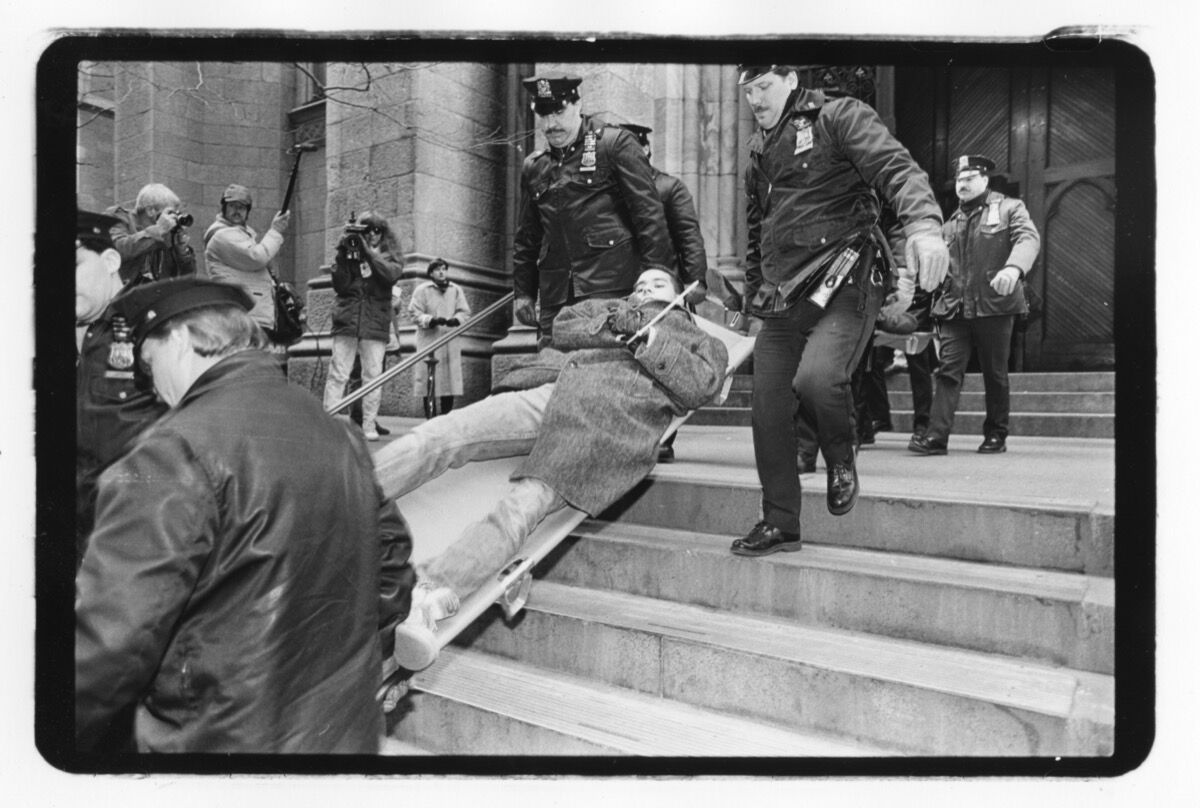 An image by Brian Palmer, taken on December 10th, 1989, shows an AIDS Coalition to Unleash Power (ACT UP) protester being arrested and hauled out on a stretcher from St. Patrick’s Cathedral. He was one of 4,500 demonstrators who participated in the “Stop the Church” action after Roman Catholic authorities came out against teaching safe sex—including using a condom—in New York City public schools.
Another photograph by Thomas McGovern was taken during the political funeral of Jon Greenberg, an activist who died of complications from AIDS on July 12th, 1993. Greenberg’s friends marched into the funeral home, picked up the coffin, and hauled it through the streets before bringing it to Tompkins Square Park, where they opened the casket and performed a eulogy. The photograph shows the power, pain, and determination—all swirling together into the steeled face of activist and pallbearer James Baggett—felt by those battling against local and federal officials who failed to deal with the AIDS crisis in its magnitude. 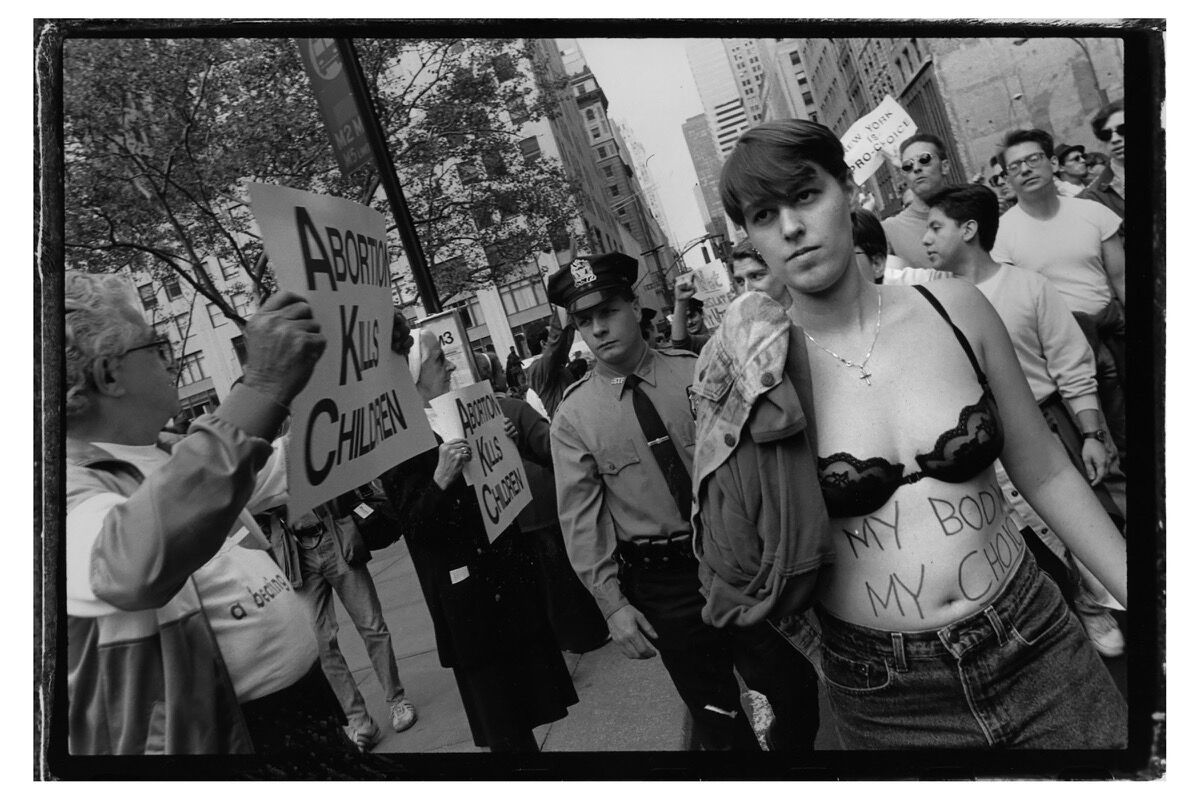 When protester and counter-protesters meet in the streets, the juxtaposition between polarized viewpoints can show how far apart two beliefs are. Just look to the contrast in Sandra Lee Phipps’s image of an abortion protest and counter-protest. A shirtless woman is seen with the words “my body, my choice” written across her stomach, a cross hanging softly from her neck. An old man stands to her left, brandishing a sign that says “abortion kills children.” If the pair are nearby physically, their messages and gazes are world’s apart. Their eyes do not meet. Instead, the woman stares off and ahead, the counter-demonstrator looks back towards the onrushing march of people, and a police officer’s cold gaze scans the face of the grey-haired man.
—Isaac Kaplan
Related Stories