Why Photography Was so Important to These Radical Lesbian Communities 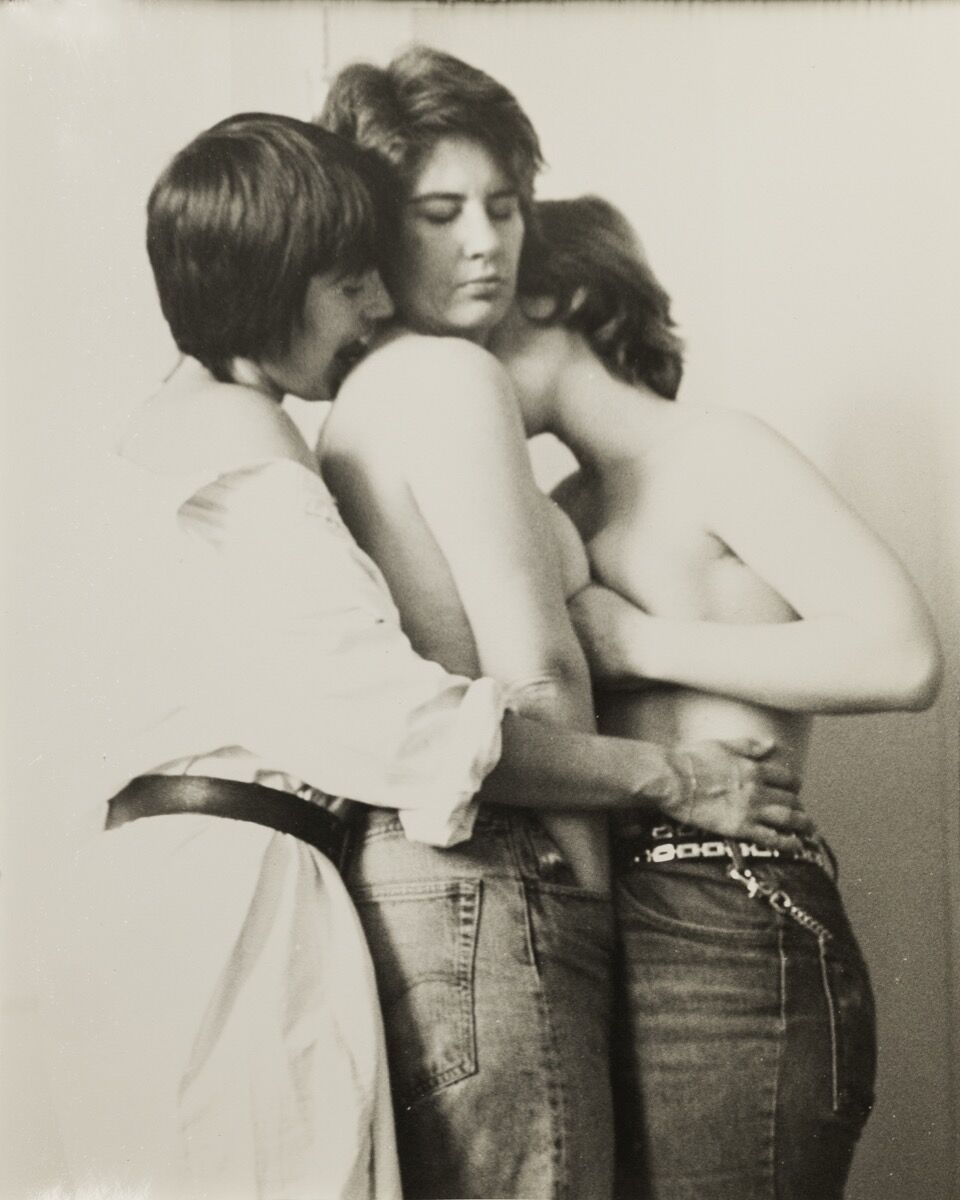 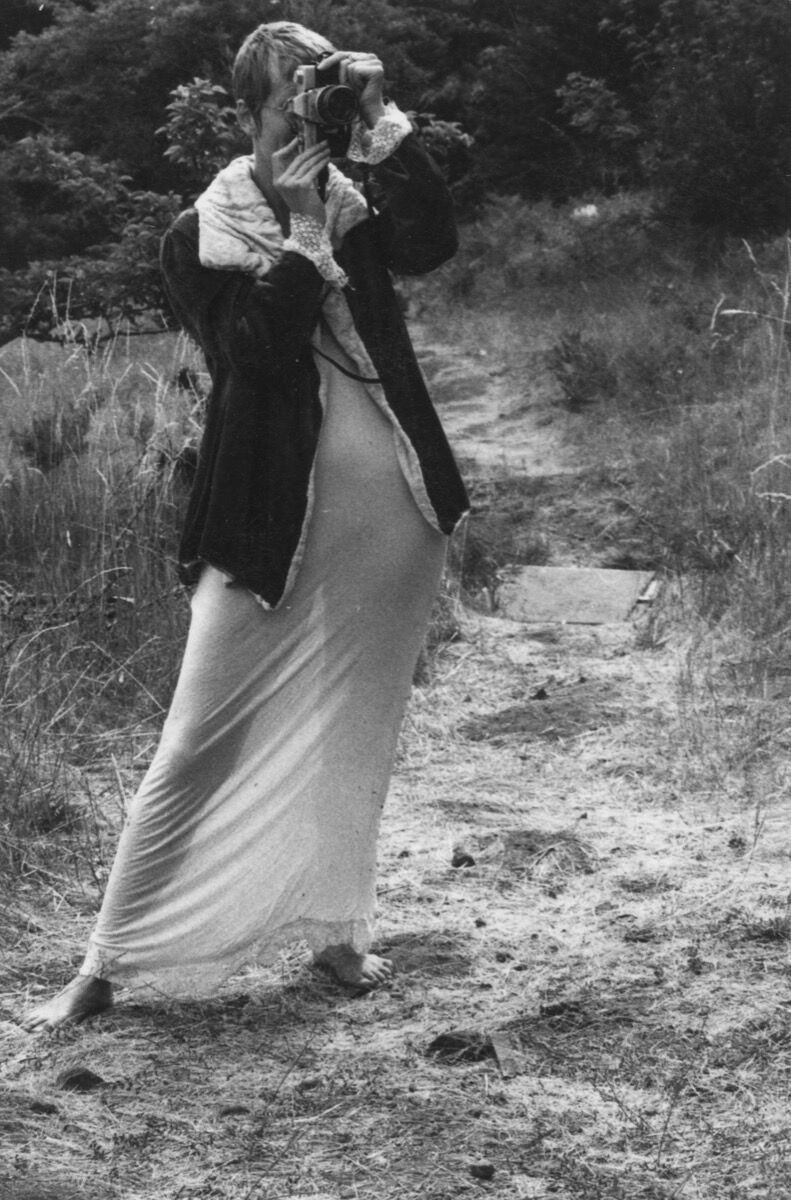 Carol Newhouse. Ccourtesy of the artist

In the 1970s, communities of feminist, separatist, and mostly lesbian women began to build their own utopia across the United States. Giving up their former lives and the comforts of home, they headed to private rural land where they could live free from the shackles of the patriarchy. They called them “Womyn’s lands”—unlike other communes of the “Back to the Land” era, many of the women were emphatic about the gender rules: no hetereosexual people and no men.
It was in this closed single-sex environment that a series of photography workshops called the Ovulars emerged, taking place each summer in the early 1980s. They were held at Rootworks, the Womyn’s land that photographer and poet Ruth Mountaingrove and her partner Jean founded in Oregon. Later, makeshift darkrooms cropped up in other Womyn’s lands. The artists who taught at the Ovulars included Joan E. Biren, or JEB; Tee Corinne, and Honey Lee Cottrell. The workshop’s name was a feminist repossession of “seminars,” and they spawned a prolific archive; one that was fundamental to the identity of the women and the ideology of the Womyn’s lands—a declaration of their right to exist.
But that document has been mostly ignored in the wider historical context of the counterculture movement until now. Artist
Carmen Winant
is bringing that history back to the fore in the photo book Notes on Fundamental Joy; seeking the elimination of oppression through the social and political transformation of the patriarchy that otherwise threatens to bury us (2019). 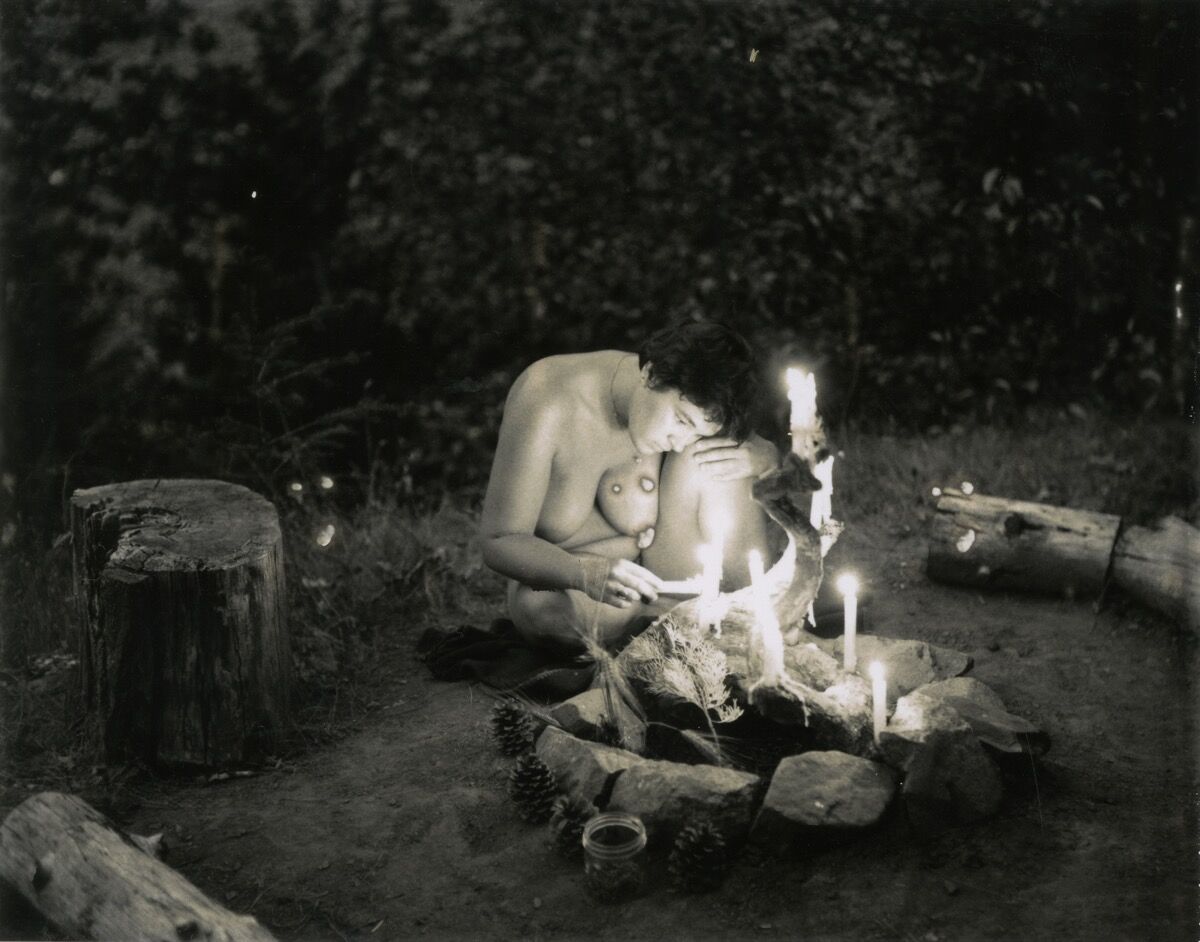 Winant has been researching the Womyn’s land for more than six years, while she worked on her project My Birth (2018), an installation of found images of childbirth practices in the U.S. that exhibited at the Museum of Modern Art’s “Being: New Photography” show last year. In Notes on Fundamental Joy, she reproduces some of the pioneering images created during the Ovulars, interwoven with an intimate response in words from Winant. “I felt, from first seeing these pictures, that I belonged somehow,” Winant reflected. “Or at least, I desperately wanted to.”
Notes on Fundamental Joy emphasizes the importance of photography in the Womyn’s lands. “As I see it, photography is such a persuasive way to re-tool desire, to re-inscribe our own narratives, to prove that we are here,” Winant said of the medium. Photography was particularly effective for the women who had come to the Womyn’s lands, many of them newly out, and alone. “Here, learning and making new pictures was a way to reinvent and reclaim.”
The Ovulars also produced a magazine, The Blatant Image. Only three issues were ever produced (they can now be found circulating on eBay). It was through the publication that the Ovulars began to have a wider impact in supporting women photographers: some of the first images by
Barbara Hammer
,
Carrie Mae Weems
, and
Mary Beth Edelstein
were also published. 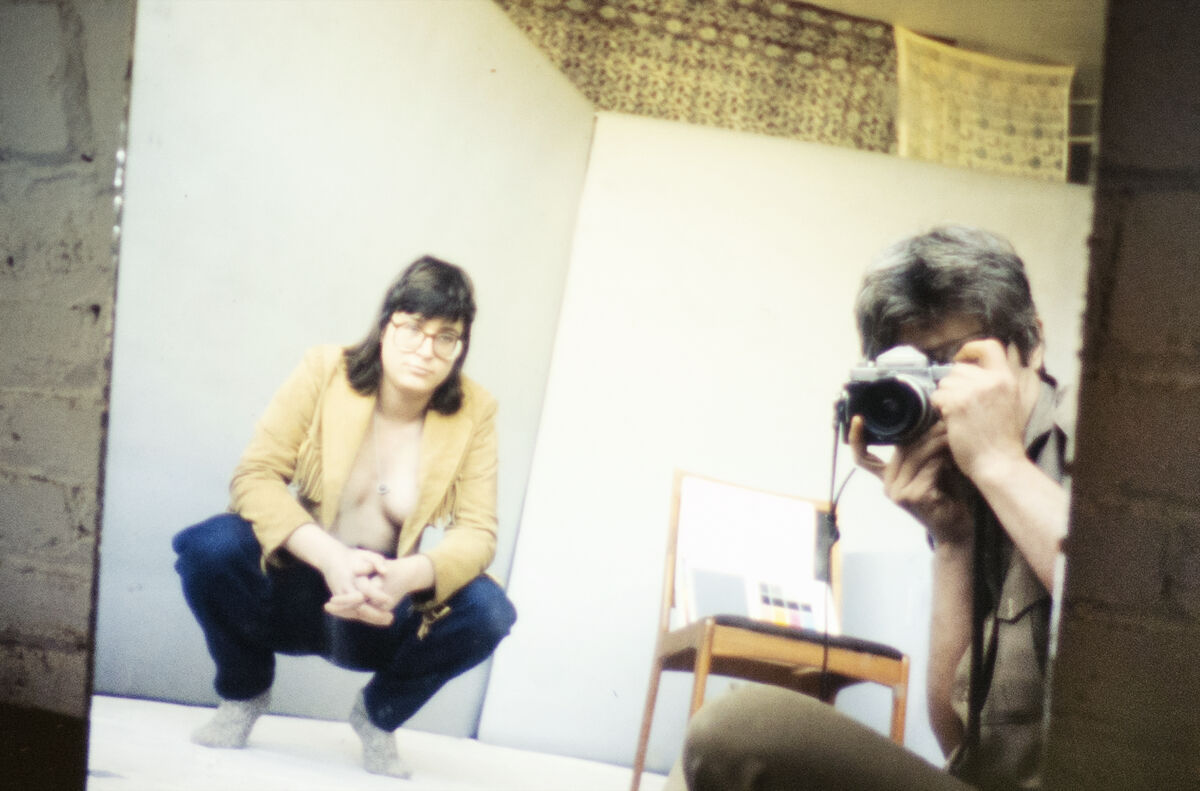 Advertisement
The multi-week Ovular workshops were “extremely bare bones,” Winant said. “They camped, went to the bathroom in an outhouse, cooked and ate together at the fire, bathed in stream water, used a marine battery to generate power, and built their own wet sink.”
They photographed each other often as they learned about photography. In this environment, they were able to seek unbridled forms of expression that were culturally prohibited beyond their community. “They made pictures of their bodies—of sex and love, of nature. These pictures are really full of joy,” Winant said. Their lessons spanned working with 4 x 5 cameras to making erotic images.
Their nudity was not only erotic—it was a symbol of comfort, ease, and liberation from social norms. In one image, two women set up a shoot, naked but for socks and Converse sneakers; in another they relax in a pool, nude and natural.
There was also an assignment that functioned like the collaborative
Surrealist
game Exquisite Corpse. “One at a time, they would take a picture, develop and print it, then pass it on,” Winant explained. “The next woman would make a picture from that picture. At the end they had an incomplete, if surreal, narrative of their collective lives in that place.” 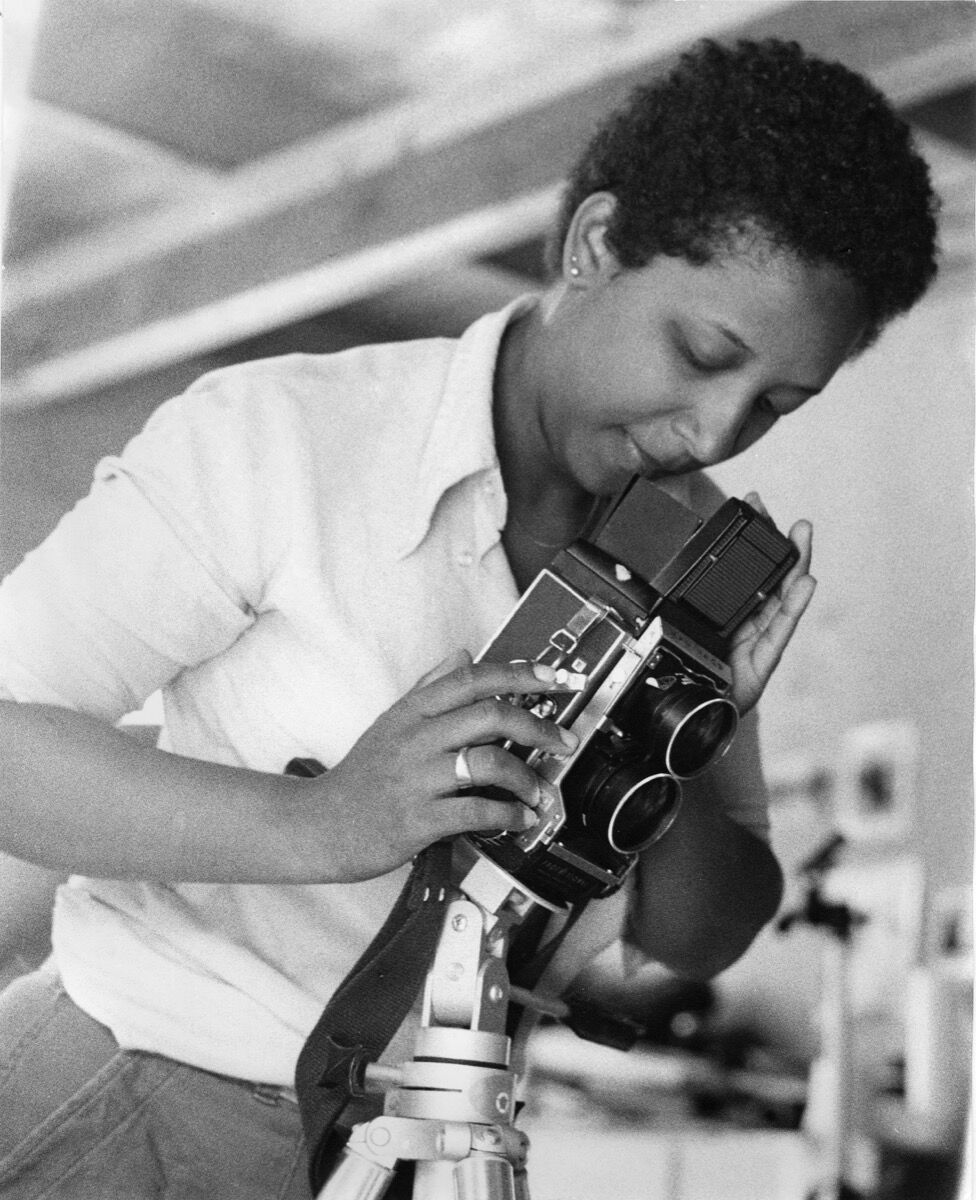 Carol Newhouse. Courtesy of the artist 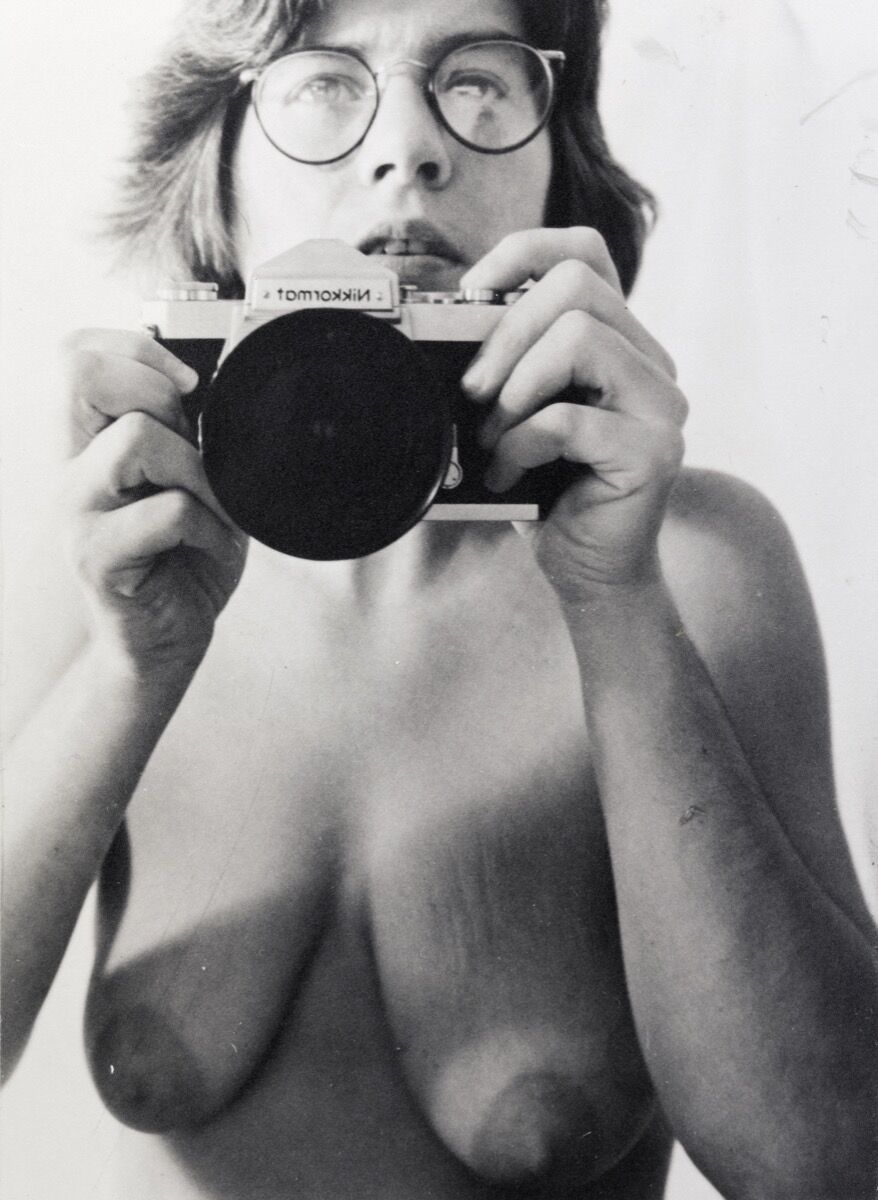 The photographs vary in subject, but they share a sense of joy throughout: it’s this that underpins Winant’s project, a kind of self-affirmation and confidence captured and passed on through the camera.
“It was just so revelatory,” Winant said of her first encounters with the images. “The camera had so long been associated with something else for me—a masculine dominance, something more paternalistic.”
There was one woman, Lynne, who particularly fascinated Winant. She was photographed by Carol Newhouse, one of the original organizers of the Ovulars and one of the women Winant corresponded with during the project. 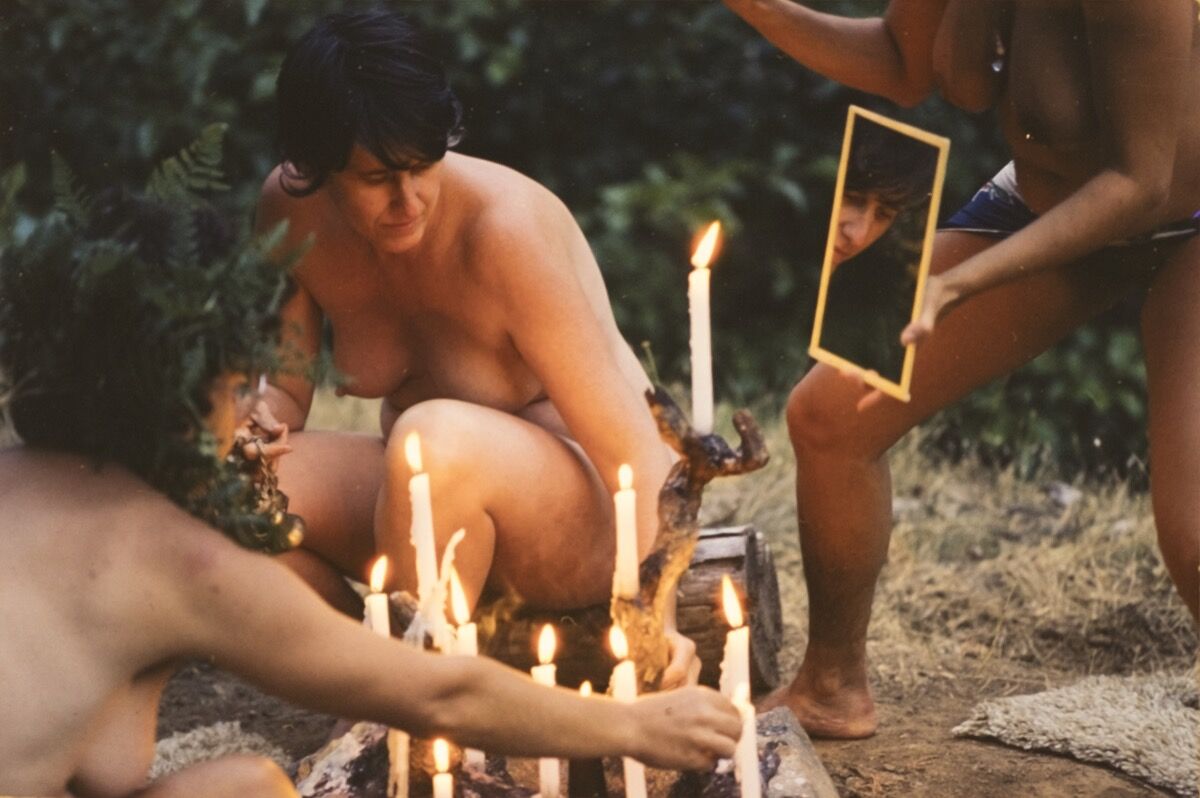 Lynne “appears a few times over—likely a participant in the archives rather than a teacher—and she stands out as the only woman of color,” Winant noted.
“I keep thinking about her,” Winant continued. “The Ovulars were founded in the spirit of non-hierarchy and total openness—they achieved that and more. But of course one cannot ignore the ways in which access translates across worlds.”
As a younger—and heterosexual—outsider, Winant faced skepticism from some of the photographers she contacted, and she sometimes questioned her own role in the project. “I had to ask myself many times, What is my place here? Am I imposing myself where I don't belong, and wasn't welcome?”
Part of her process has been to correspond closely and openly with the women involved. “I was met with a mixed and very honest reaction from the photographers I contacted,” she said. “I can understand their suspicion, or their skepticism. I wasn't there; I didn’t make these pictures; I don’t belong, in a clear way, to this history.” Winant is clear that this project is not her art. She sees her role as that of an agent who has organized and preserved an important cultural movement. 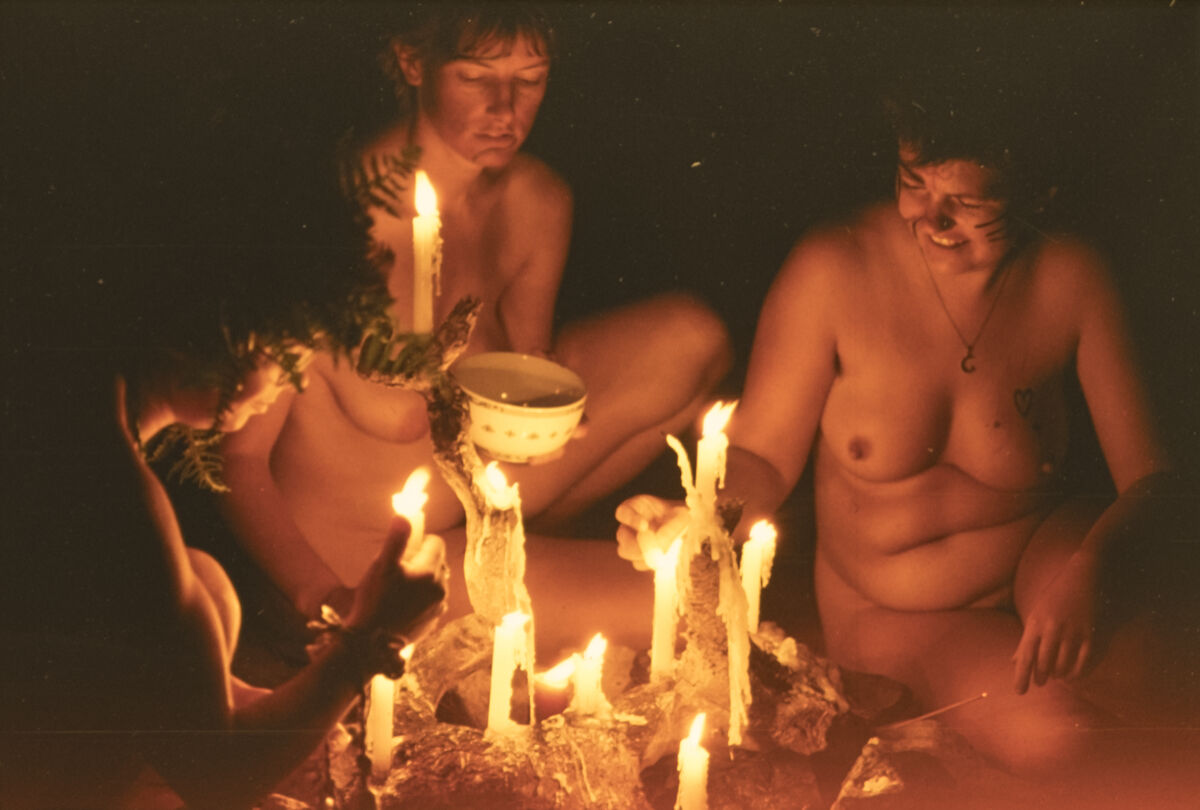 Today, most of the Womyn’s lands have disbanded, and those communities that still exist are dwindling, populated mostly by the older generation who established them. They prefer to keep a low profile, but that also means they haven’t been able to attract new, younger members.
“This way of being political—of being radical, really—has gone out of fashion,” Winant said. In the 1970s, these women had to isolate themselves from society in order to live the life they wanted; nowadays, things are at least a little more inclusive. The idea of going out into the woods is “seen as out of step… too essentialist, too radical. In some ways that is what the book is about. Not only how generations shift their strategies, but their relationship to possibility.”
In a few years, the Womyn’s lands may be gone, but the pictures will now ensure their legacy lives on.
Charlotte Jansen
Clarification: This article has been updated to include the first name of Ovular participant Lynne, who had previously been referred to as anonymous woman. Additional reporting and context has been provided via comment from Carmen Winant.
Correction: A previous headline for this article incorrectly referred to Womyn’s lands as “communes.” The headline has been updated.
Related Stories