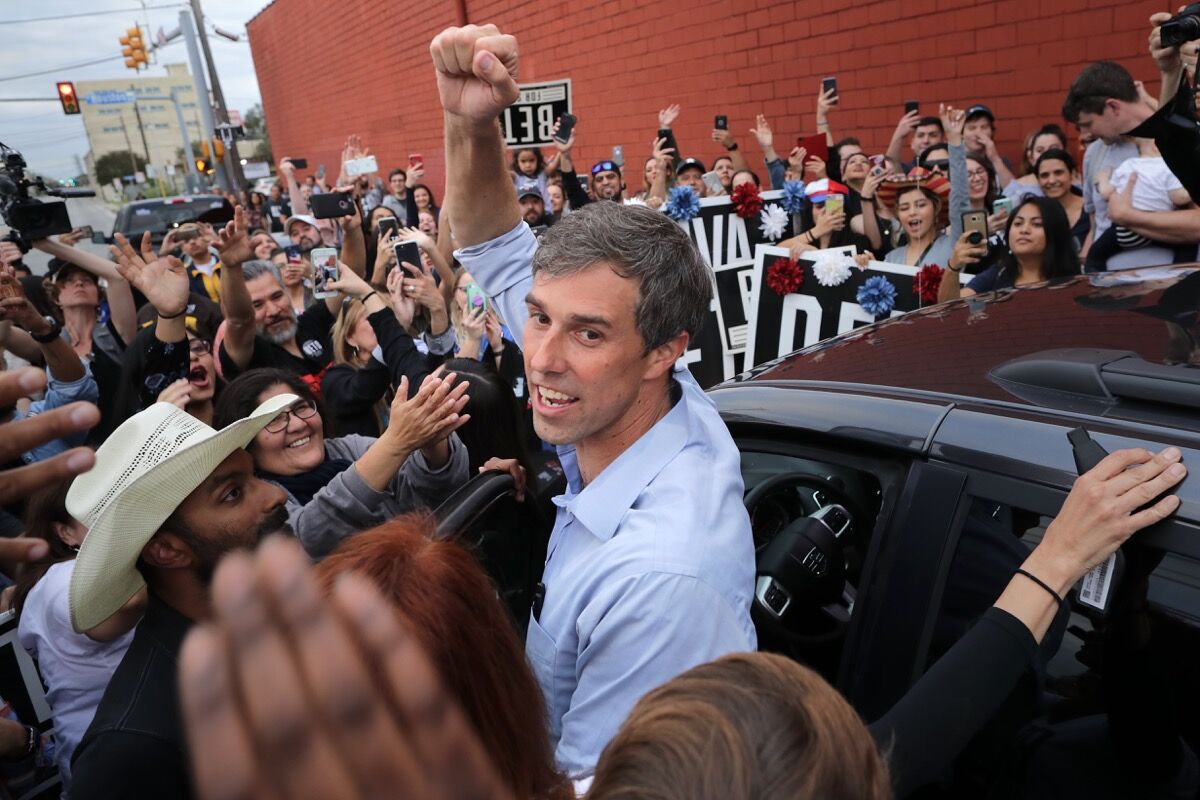 Beto O’Rourke’s blue button-down tells you he’s a simple man. His rolled-up sleeves say he doesn’t mind getting his hands dirty. His jeans assure you he’s just the boy next door. Beto, as the folksy, first-name-basis campaign signs implore you to call him, is together, but not too together. No, Beto is a shirt-unbuttoned, hands-in-his-pockets, casual kind of guy.
It’s no surprise that photojournalistic images that emphasize these visual markers of relatability run with stories that point to Beto as a “sensation,” describe depictions of him as a superhero, or detail the “cult of Beto.”
The code of ethics outlined by the National Press Photographers Association (NPPA) instructs photojournalists to “recognize and work to avoid presenting one’s own biases in the work” and to “resist being manipulated by staged photo opportunities.” But in today’s social media–oriented political landscape, where entire personalities are staged, photojournalists are challenged to find truth beneath an onslaught of ready-made narratives and personal brands. 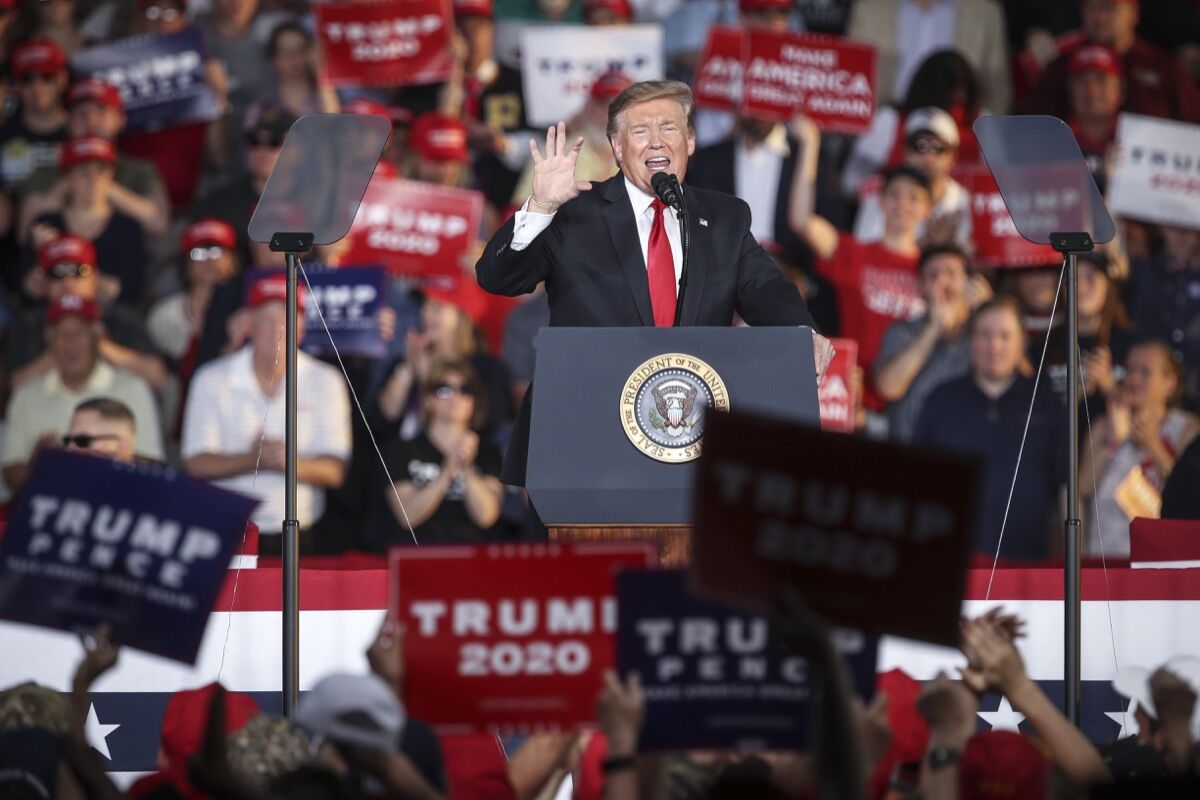 Like all journalism, photojournalism aims to depict “the best obtainable version of the truth,” said Nicole Dahmen, a media studies professor at the University of Oregon. But each captured scene is filtered through layers of inherently subjective decisions: the photographer shooting one frame over another; the editor sifting choosing which images best illustrate the story.
The quest for truth in visual media is uniquely complicated by that fact that images have an intrinsic human, emotional component—“a way of hitting you in the gut,” as Dahmen said. Johnny Simon, photo editor at Quartz, points out the irony that photos are associated with objectivity. “If we wanted scientific objectivity we’d have to watch a 30-minute C-SPAN account of farm subsidies, or let Google vehicles do reporting for us,” he joked. Fair coverage in photojournalism, then, is less about a kind of withdrawn, scientific “objectivity” and more about an ongoing and often fraught quest to match emotional truth with reality. 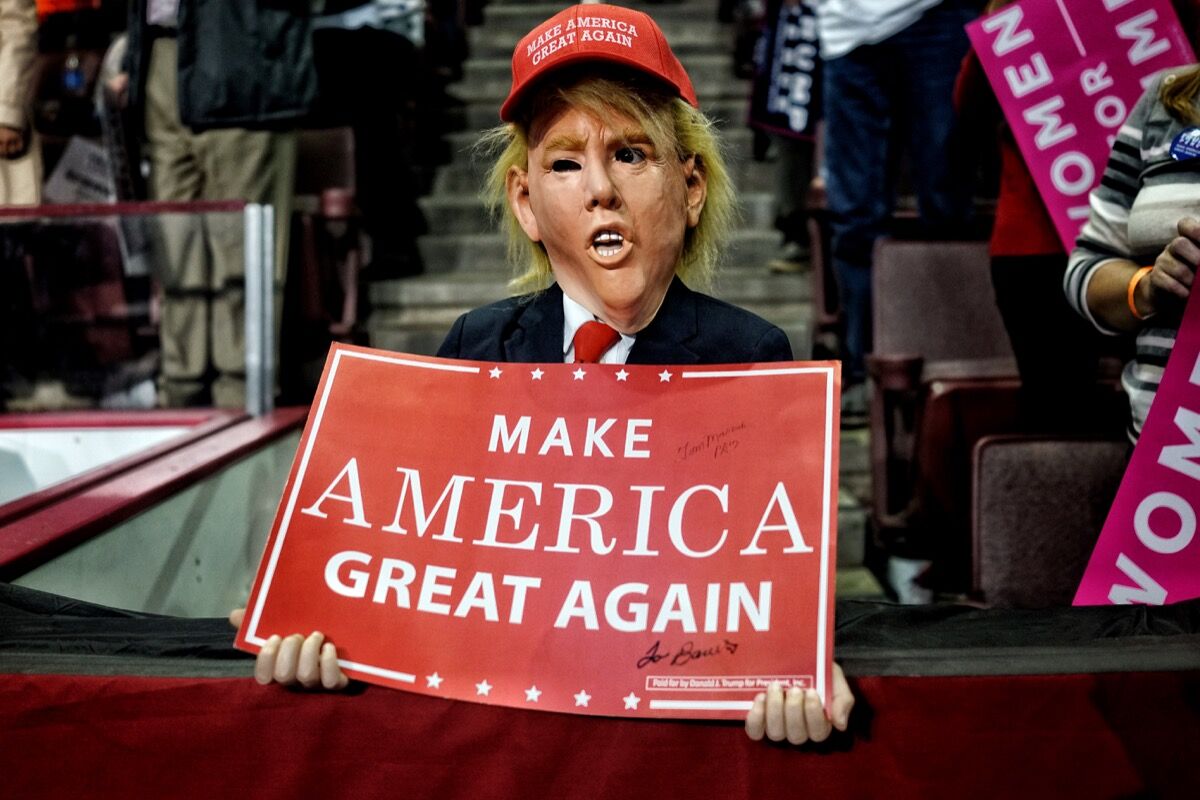 Supporters of Republican presidential nominee Donald Trump cheer for him during a campaign rally at the Giant Center November 4, 2016 in Hershey, Pennsylvania.

Advertisement
Particularly on the campaign trail, the clothes a candidate wears—as well as the symbols, slogans, and signs seen at rallies—create carefully orchestrated photo-ops designed to make you feel a certain way. Trump’s sea of red MAGA hats at rallies became such a successful shorthand for Trumpian policies that today, some who disagree with his policies actively avoid wearing ordinary red baseball caps. “When it comes to politics it’s all about the candidate trying to control the visual narrative,” Dahmen said.
Tanner Curtis, a politics photo editor at the New York Times, encourages photographers to think about these rallies like puzzles that need to be taken apart and reassembled. They will inevitably be put in strategic places for the campaign, he said. “It’s your job to go and push those limits a little bit,” he tells them. “You have to be clued in, look closer, and look beyond.” Curtis emphasizes the importance of highlighting the elements that make up the scene, such as the way the seating at a campaign rally might distort the size of the crowd.
The same goes for presidential coverage. Curtis notes that often the difference between the official White House images and independent coverage is a matter of scope. The White House Team’s goal is to highlight the president, his policies, and whomever he is meeting with. Frequently that is done with images that look to be taken in a void: President Trump speaking to an unseen audience, or shaking hands with another world leader with no one else in the frame. 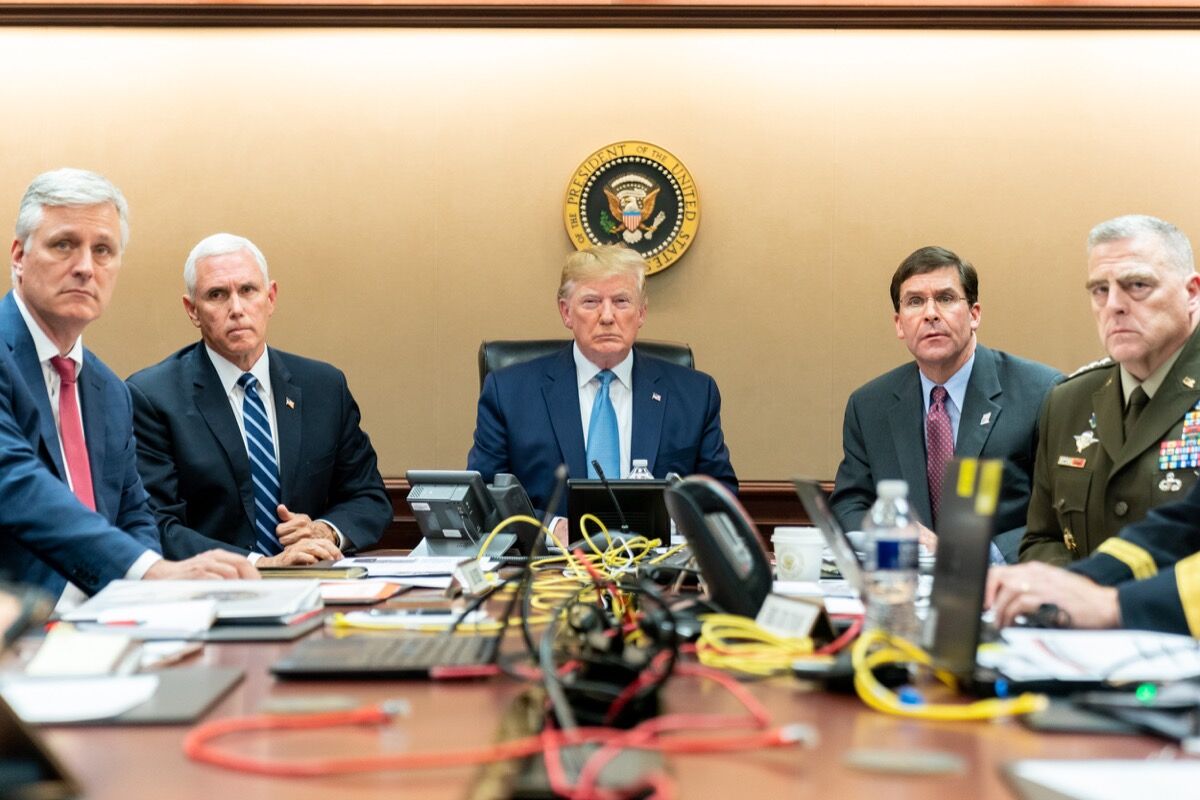 A photojournalist’s role, Curtis said, is “to provide as much visual context as you can,” be it boom mics or other press members crowded around. “It’s not just these two guys sitting in chairs,” he said. “The press photo has a chaotic energy…the full scope of reality.”
In breaking the fourth wall, photojournalists tap into the emotions found in the atmosphere of an event. “They sense things that are going on that they’re distilling in imagery,” said Michael Shaw, founder of Reading The Pictures, a site dedicated to analyzing news images.
Shaw points to prominent photojournalists of the 2016 election like
Landon Nordeman
, Mark Abramson, and Philip Montgomery as particularly deft at harnessing those intuitions. Images published in the New York Times’s 2016 “Year in Pictures” feature showed theatrics and excess: Hillary Clinton and Tim Kaine dwarfed by balloons at the Democratic Convention like Tweedledee and Tweedledum; Donald Trump’s grin supersized in a jumbotron looming overhead. In one image by Richard Perry, the Republican candidates pivot like choreographed dancers as Trump looks toward the audience with a haughty smirk. Photographers tapped into the “cynical, sardonic” attitude of an America that was disenchanted and disaffected by the establishment, Shaw said—“they captured a ‘we can’t trust any of them’ kind of feeling.” However fitting these clowny, carnivalesque images might have felt to some voters, they inevitably portray one perspective over another. 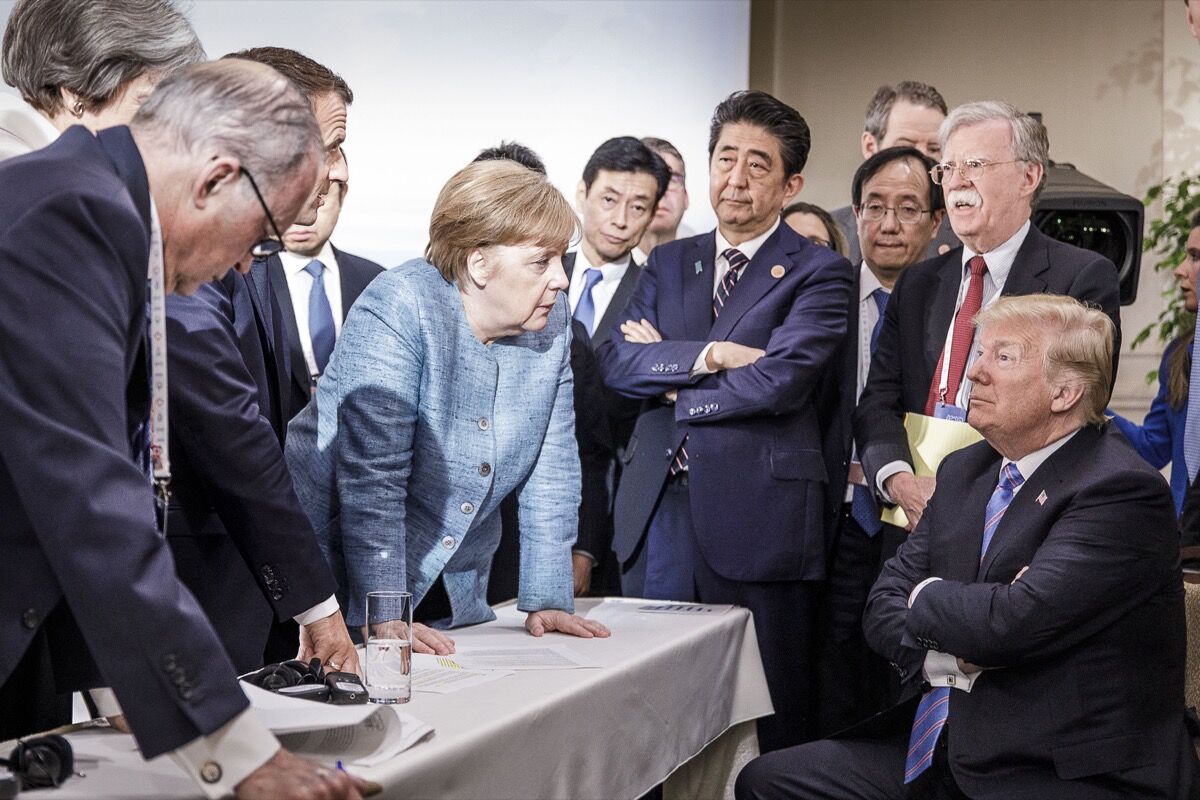 German Chancellor Angela Merkel deliberates with US president Donald Trump on the second day of the G7 summit on June 9, 2018 in Charlevoix, Canada. Photo by Jesco Denzel /Bundesregierung via Getty Images.

Photographs can be used to understand or echo voters’ emotions, but in the digital chaos, emotions often impose on images. Last June, during the G-7 summit, major outlets ran a shot by Jesco Denzel that seemed to show a domineering Angela Merkel leaning over a hostile Trump. Days later, John Moore’s image of a Honduran toddler crying as her mother was searched by border patrol officers went viral, amid reports that the U.S. was separating thousands of children from their parents in detention facilities. In both scenarios, the images were not exactly what they seemed. While tensions were high at the G-7, other images taken of that same conversation showed a more ordinary exchange. Similarly, it was later reported that the child at the border had not been taken from her mother, though they were both detained.
Still, such images struck a nerve because they got at an emotional truth—even if the contextual truth was quickly distorted online. Curtis said it presents a unique challenge in photo editing today. “You have to be aware of any picture that you publish can be shifted to whatever narrative: left, right, or center,” he explained. “It’s our role whenever we are publishing those types of pictures to make sure we are including the right caption and visual context.” 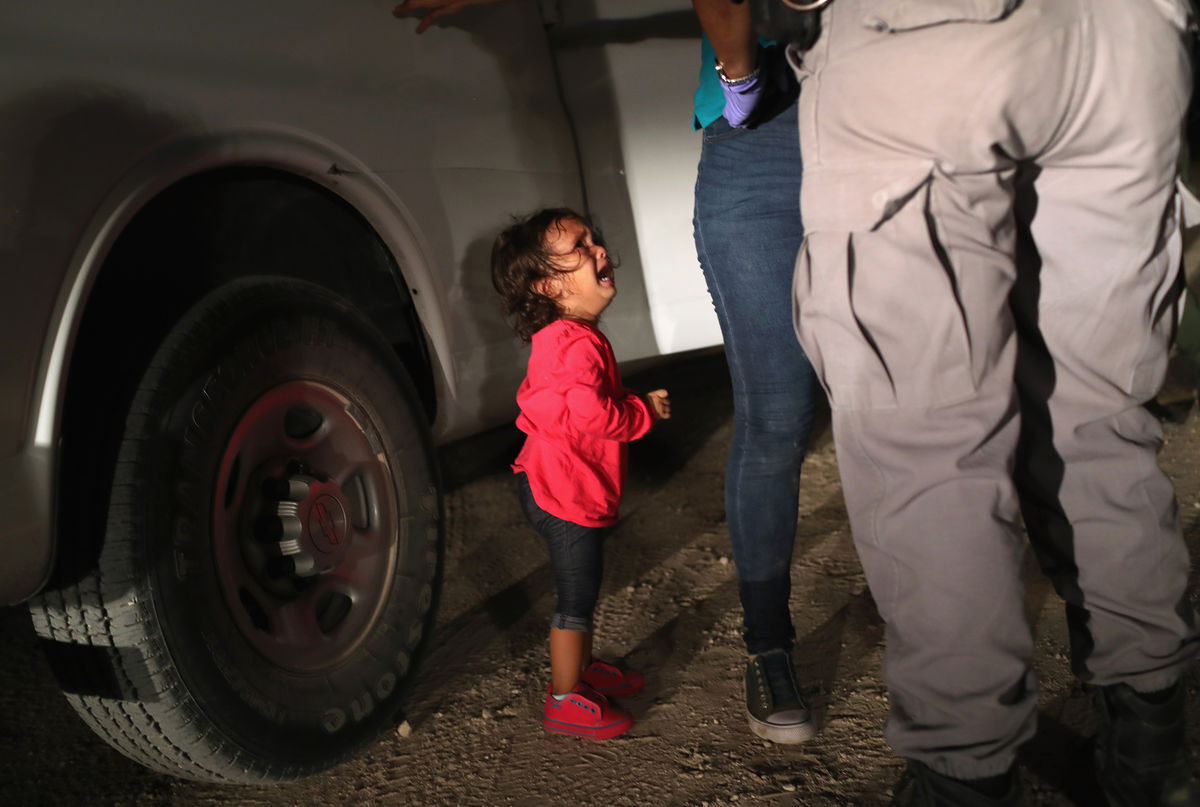 A two-year-old Honduran asylum seeker cries as her mother is searched and detained near the U.S.-Mexico border on June 12, 2018 in McAllen, Texas. Photo by John Moore/Getty Images.

When political figures become sought-after portrait subjects, it further complicates the role of photo editors. O’Rourke announced his 2020 campaign on a Vanity Fair cover shot by famed celebrity portrait photographer
Annie Leibovitz
. Shaw described the image, which portrays O’Rourke as both a daring frontiersman and an approachable blue-collar boy, as “the perfect merger of politics and advertising.” Former president Barack Obama graced the pages of magazines from Wired to Vogue, and his own images from Pete Souza conveyed emotional depth and narrative power. Shaw noted that the Obama administration’s savviness with images created a problem for editors: “How do we pull the curtain back? How do we show the show?”
But not all public or political figures are as fortunate as O’Rourke and Obama. In a viral moment from the Democratic primary debate this July, presidential hopeful Marianne Williamson condemned “dark psychic forces.” Shortly thereafter, an image by Brendan Smialowski of a wide-eyed Williamson, head cocked, bottom teeth jutted forward, quickly circulated on social media and was published by outlets like Vox and the Los Angeles Times. She was broadly characterized as a “wacko” and the image itself had an unsettling, vertiginous tilt. 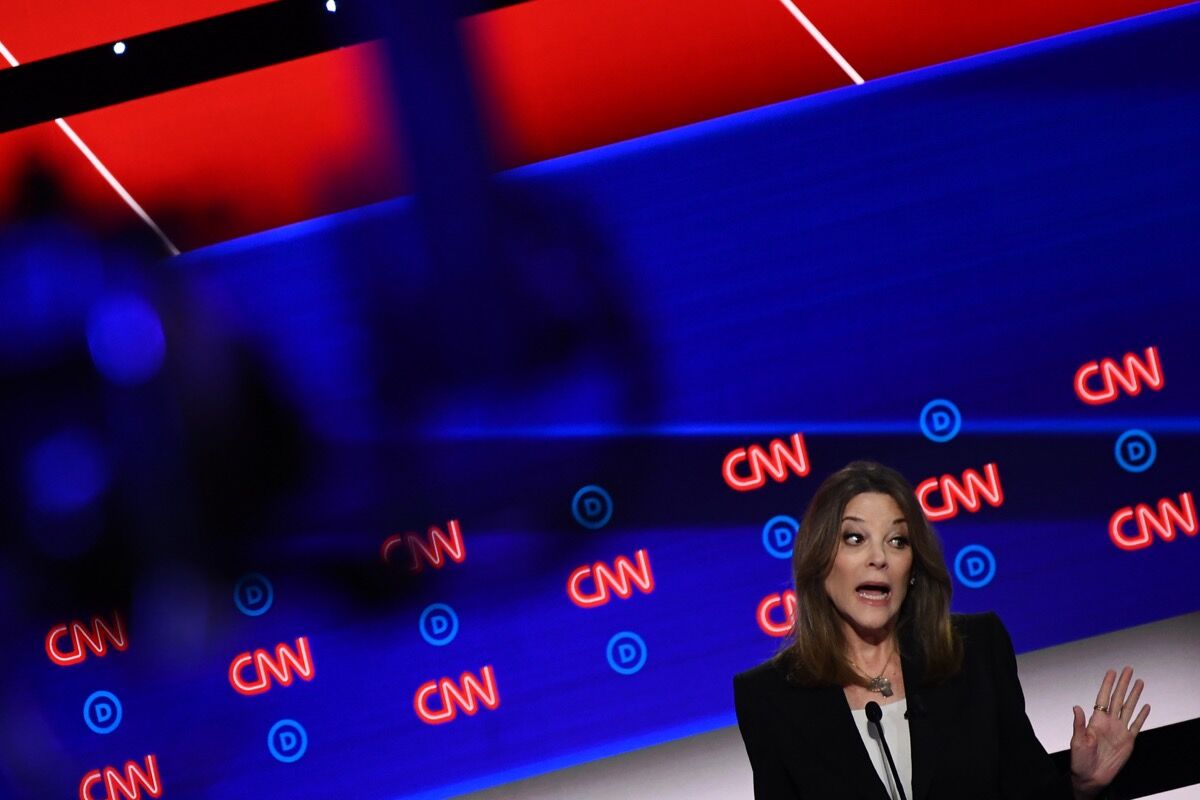 Marianne Williamson speaks during the first round of the second Democratic primary debate of the 2020 presidential at the Fox Theatre in Detroit, Michigan on July 30, 2019. Photo by BRENDAN SMIALOWSKI/AFP/Getty Images.

“There’s an absurdity you see as a journalist covering these events, and that can be fun to photograph,” noted Mark Murrmann, photo editor at Mother Jones magazine. But, he added, it’s crucial to give a sense of what the candidates and their supporters are about. That can mean making visual choices that don’t feed the Twitter maelstrom with a ready-made illustration of the latest viral sound-bite.
Whether refusing to fall prey to the temptations of today’s turbocharged news cycle or seeking narratives outside of politicians’ crafted brands, for photojournalists, their editors, and media consumers alike, Curtis’s advice resonates: Be clued in, look closer, and look beyond.
Kelsey Ables
Related Stories

10 Striking Moments in Photojournalism This Month