We’re Taking More Photos Than Ever—but Do We Still Treasure Them? 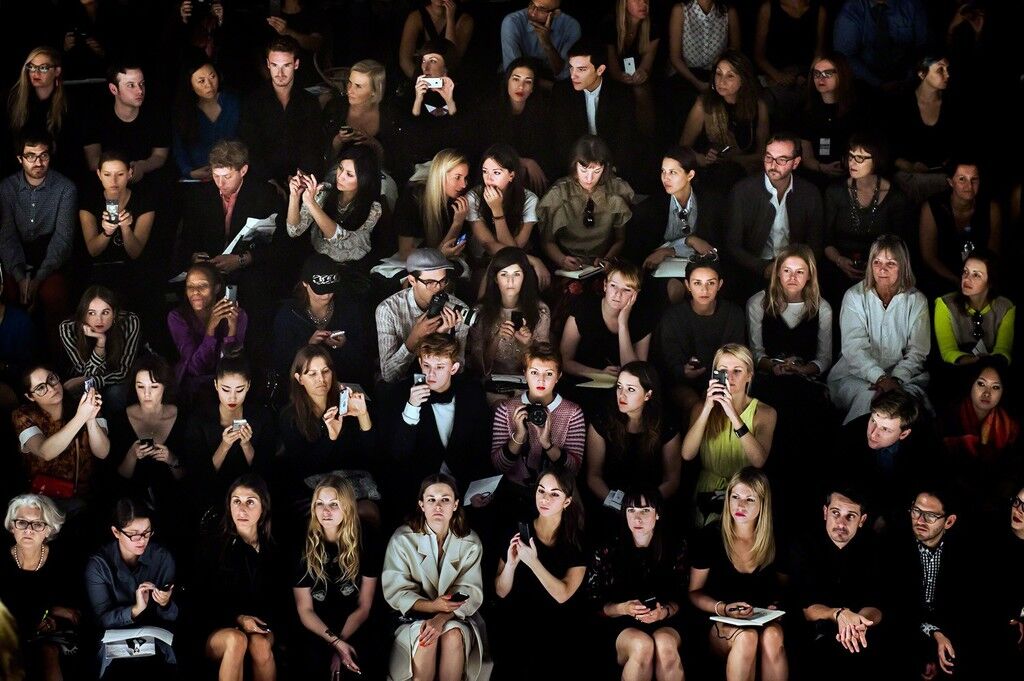 Dina Litovsky
A crowd of attendees watches the Issey Miyake runway show at Paris Fashion Week, Spring 2014., 2014
Anastasia Photo
Since I bought my first digital camera in high school—a silver Canon PowerShot from 2004 that I slung on my studded belt—I estimate that I’ve amassed around 20,000 digital images. They were taken with point-and-shoots, DSLRs, and eventually mobile phones, and saved on various thumb drives, hard drives, laptops, and cloud services. I don’t have them all in one place, and there are entire years of photos that have been erased, forgotten on my mother’s ancient desktop or wiped accidentally between phones. That laxity seems a world away from my childhood, where revisiting neatly organized photo albums was a domestic ritual.
My 20,000 photographs are just a drop in the vast ocean of images we use to crystallize our memories and communicate with one another. They represent half of my life, preserving moments that fade from memory—and they feel anything but secure. They are far fewer than the hundreds of millions of images uploaded to Facebook every day and infinitesimal compared to the estimated 1 trillion photos taken in the world in a year. We are taking more photos than ever today, but do we really value them? 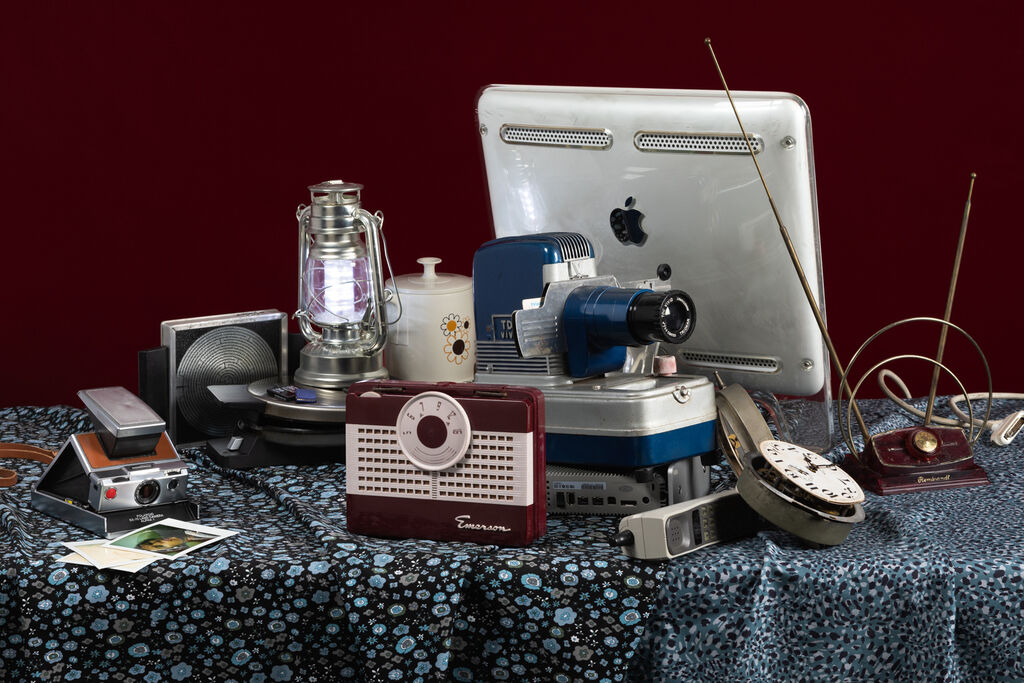 Jeanette May
Polaroid SX70, 2019
KLOMPCHING GALLERY
“We have a different relationship to photography,” said Clément Chéroux, senior curator of photography at the San Francisco Museum of Modern Art (SFMOMA). “The rarity of photography—the fact that it’s a unique object—has changed.” Chéroux recently curated the show “snap+share” at SFMOMA, which examined how dissemination of imagery has changed with the digital age.
The show included an installation by Erik Kessels, which first appeared in Amsterdam’s Fotografiemuseum in 2011. The artist filled an entire room with 1 million photos that were uploaded over the course of a single day to Flickr. “The idea was to present it as a sea of images that can you drown in,” he told BBC News that year. 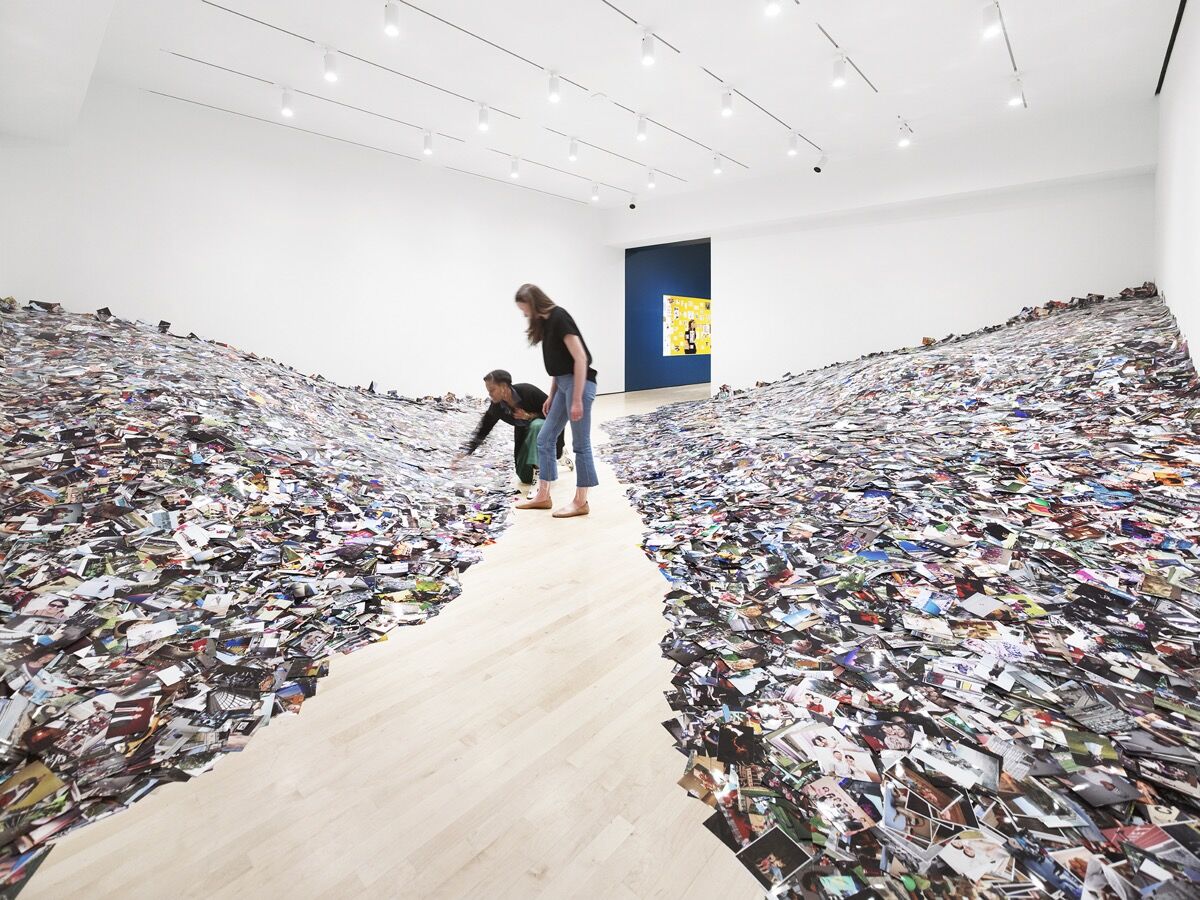 Advertisement
Kessels’s installation is a modern allegory for excess: The sheer volume of images, piled into mountains, resembles garbage. If we value something for its scarcity—a limited number of images on a roll of film or as limited-edition prints—then our compulsive amassing of digital images has changed them from something precious into a common utility. It is cheap, fast, and easy to fire off an innumerable number of shots and share them; it has become a reflex to take multiples of subjects that aren’t particularly special, but that we can upload online to signal something about our lives to the wider world.
In many ways, mass photography has changed from a private ritual to a public performance. The public aspect of images is no longer just for artists, photojournalists, or celebrities. Our photographs lead a double life: as memories that we can revisit, like journal entries; and as statements about ourselves to our social networks, like self-declarations—or self-promotion. The immediacy of sharing and posting images online fuels its second life. 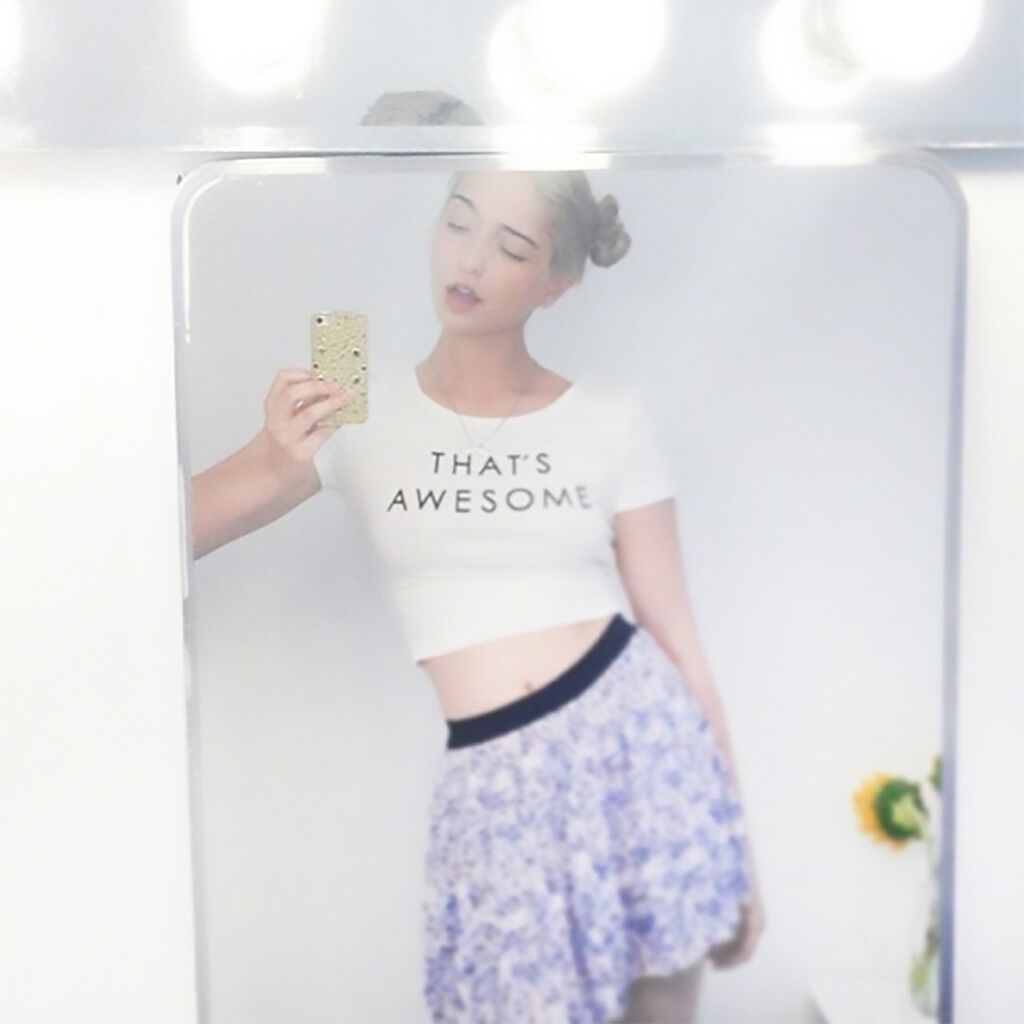 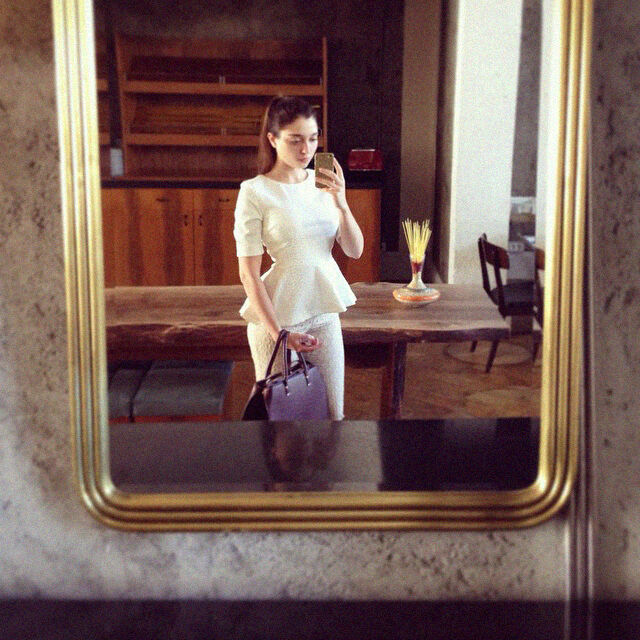 Amalia Ulman
Excellences & Perfections (Episode 03) 13th September 2014, 2014
The Moving Museum
Chéroux pointed to photography’s fated future in his catalogue introduction for “snap+share.” A sci-fi short story from 1891 divined: “In one hundred years, on New Year’s Day, and by cable, one will be able to exchange one’s photograph with that of a friend settled in the vicinity of Lake Tanganyika.” It would only take four-plus decades for the Associated Press to wire news images over 10,000 miles of telephone lines, but Chéroux noted that private exchanges of images did take about a century. In 1997, the French engineer Philippe Kahn emailed the first cell phone picture to 2,000 contacts: a portrait of his daughter, announcing her arrival into the world.
That image survives online more than two decades later—it is pixelated now, as resolutions have soared and our eyes have adjusted to them, but it can be found by anyone with a connection to the internet. Not every photo is a Time pick for the 100 photos that changed the world, as Kahn’s is, but in our age of sharing images and appropriating meme content, digital images are likely to have their lives extended well beyond the expiration dates of negatives and prints. They may be compressed JPEGs littered with artifacts, but they will exist as long as we keep the internet alive. 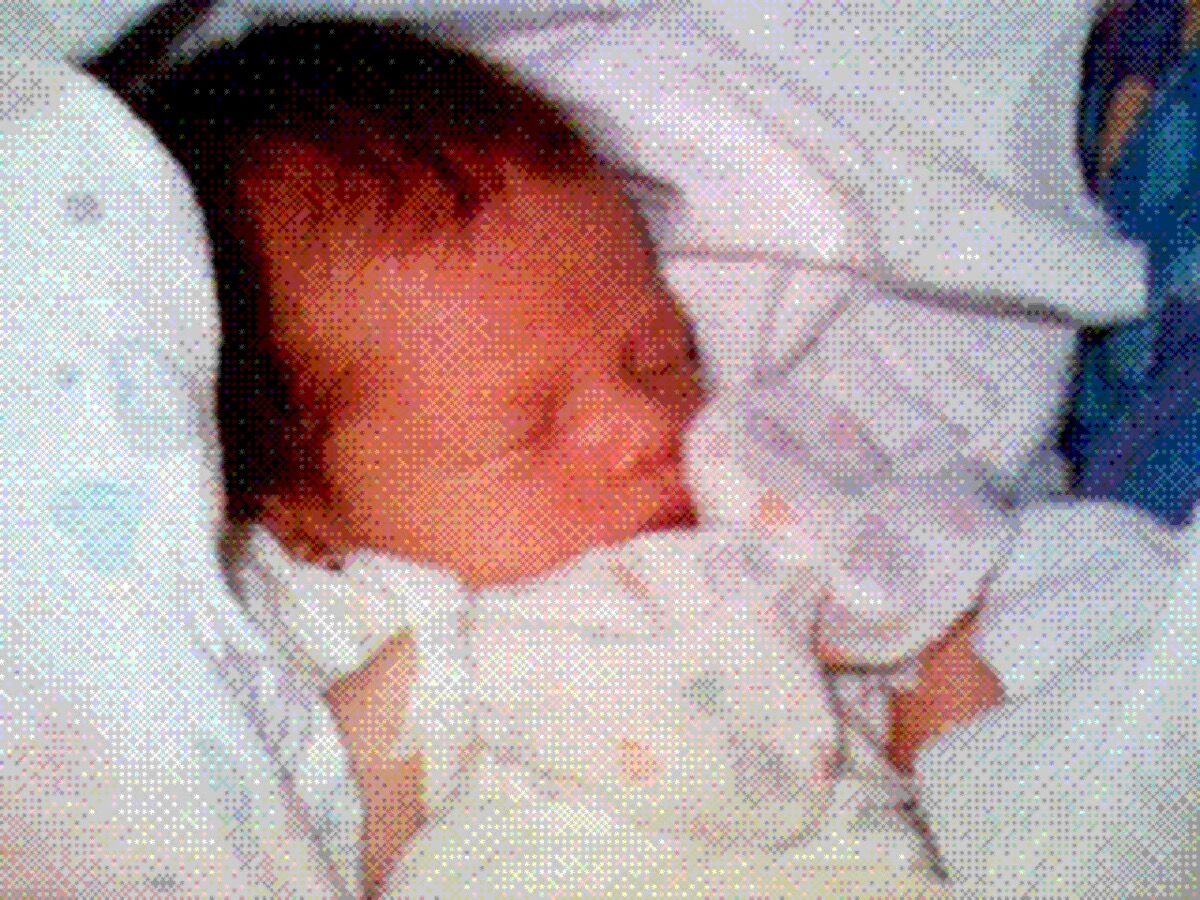 Both analog and digital photographs are vulnerable in different ways. We can lose all of our data with one failed hard drive, but they may exist on the cloud or on our social media accounts for us to recover. We pay a price for entrusting our images to corporations, however; our memories become data harvested for marketing and facial-recognition algorithms.
Print photographs may be more private, but they are fragile, too. During Hurricane Sandy, all of my husband’s baby photos and his parents’ wedding photos from 1980s Kazakhstan were drowned in sewage water. Their family members sent copies of whatever they had to make up for their loss. Their family photos, which traveled with them as they immigrated to America in the 1990s, became a lost treasure. Perhaps we don’t think of the tenuous nature of images—analog or digital—until they are gone. In that way, all forms of photography are like memory, subject to erasure, to modification. 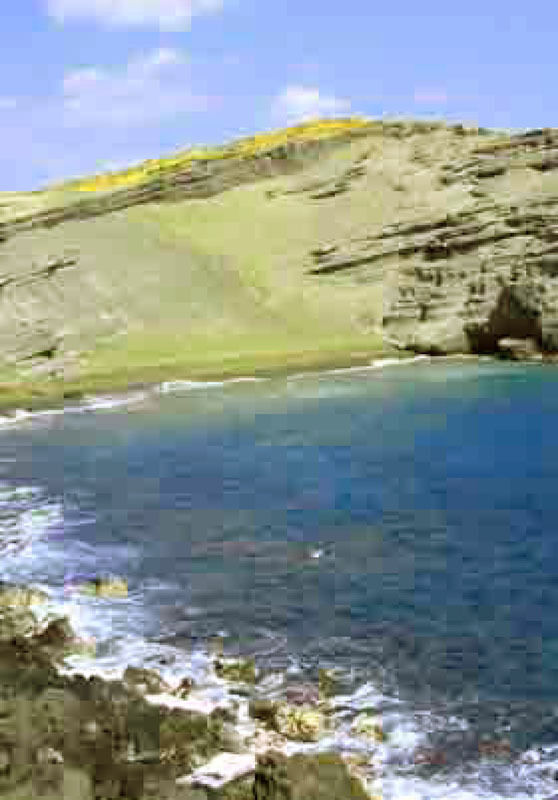 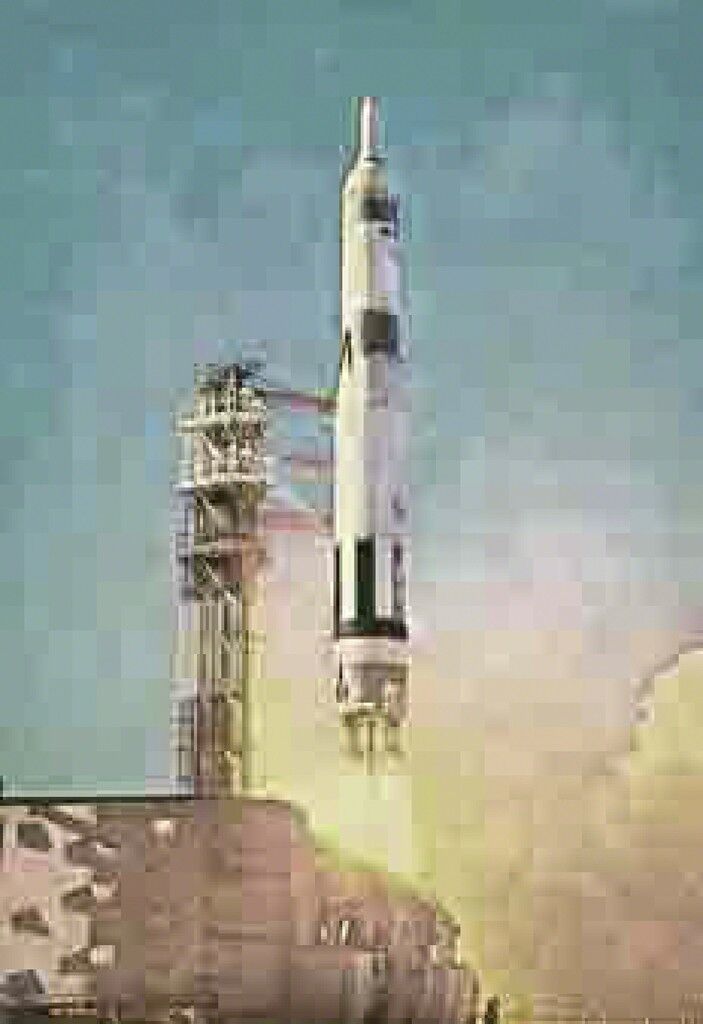 Thomas Ruff
jpeg rl03, 2007
Sprüth Magers
The bodiless nature of digital images keeps them safe from natural disasters and allows them to be easily disseminated. Chéroux likens digital images to air, or water, echoing Kessels’s comparison to the sea. Memories, Chéroux said, used to be more associated with physical, weighty entities like stone monuments or thick-stock paper albums. Photography historian Thierry Gervais emphasized the fluidity of digital images in his book The “Public” Life of Photographs (2016), noting that mobility has always been an important feature of the nature of photography.
Charles Moore
’s images of Civil Rights–era Birmingham had several “public lives,” he outlined. They were printed in nearly 6 million copies of Life, silkscreened by
Andy Warhol
, acquired and exhibited by art institutions, and used in a 6-minute film by Santiago Álvarez. 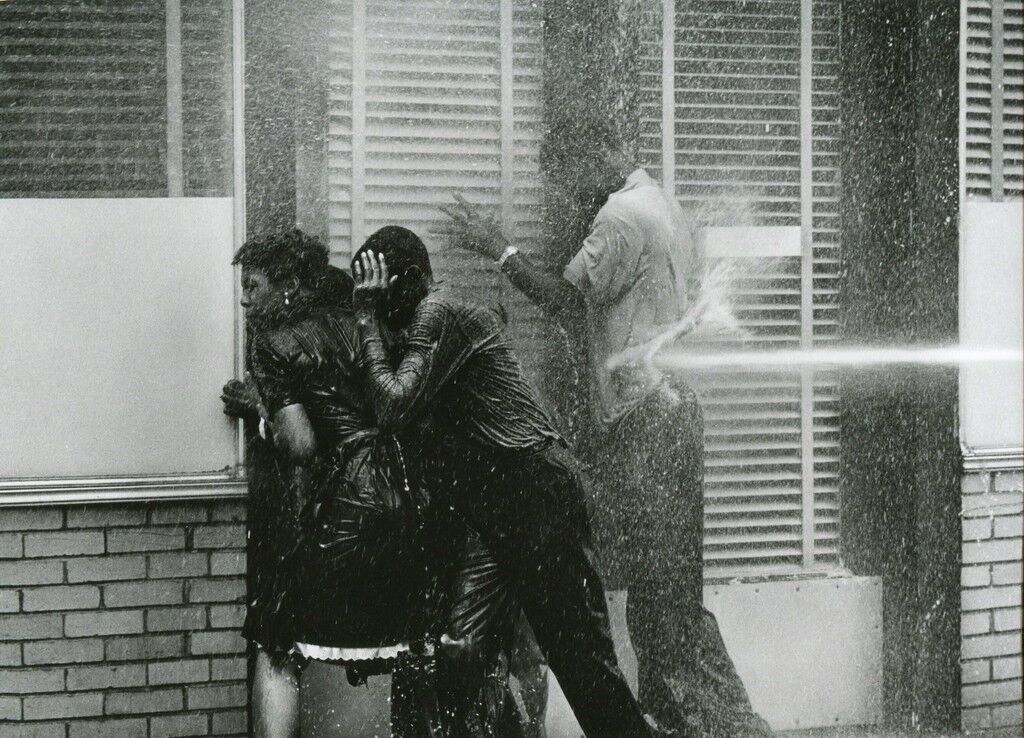 Charles Moore
Alabama Fire Department Aims High-Pressure Water Hoses at Civil Rights Demonstrators, Birmingham May 1963, Printed 2007
"Glenn Ligon: Encounters and Collisions" at Tate Liverpool
In this way, images are imbued with meaning again and again, depending on the context and viewer. Artists who utilize found images are especially attuned to this idea. Angela Deane hunts down discarded family photographs to create whimsical ghost stories.
Amy Friend
uses pinpricks of light in assorted sepia-toned photographs to meditate on memory and time. Both artists upload the amended memories online, taking private snapshots and recontextualizing the images for the art world. The images take on new emotional significance. 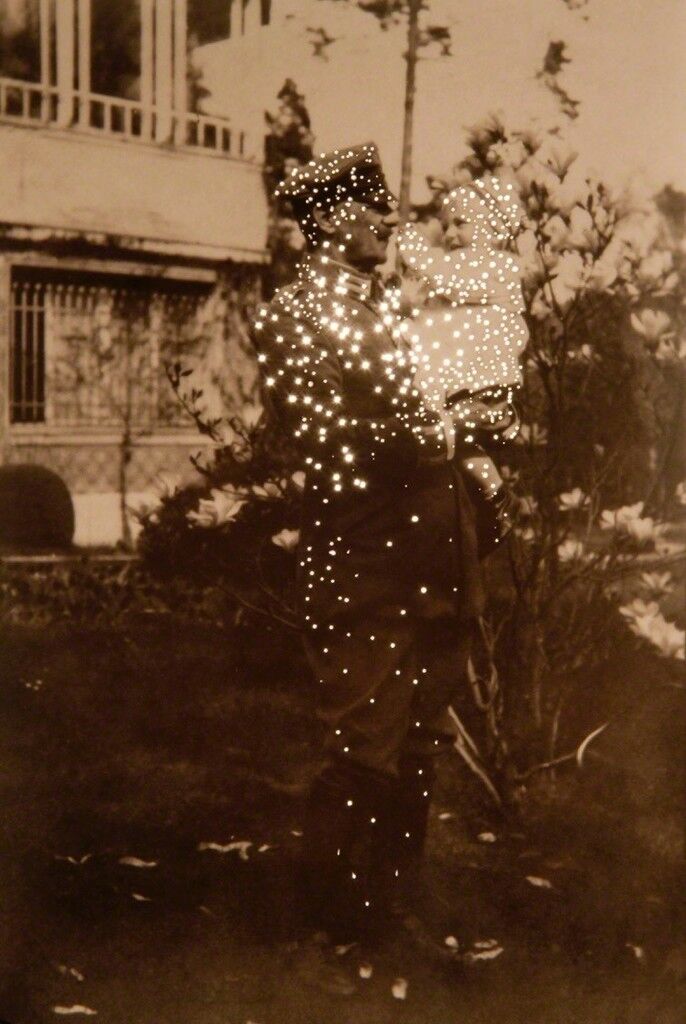 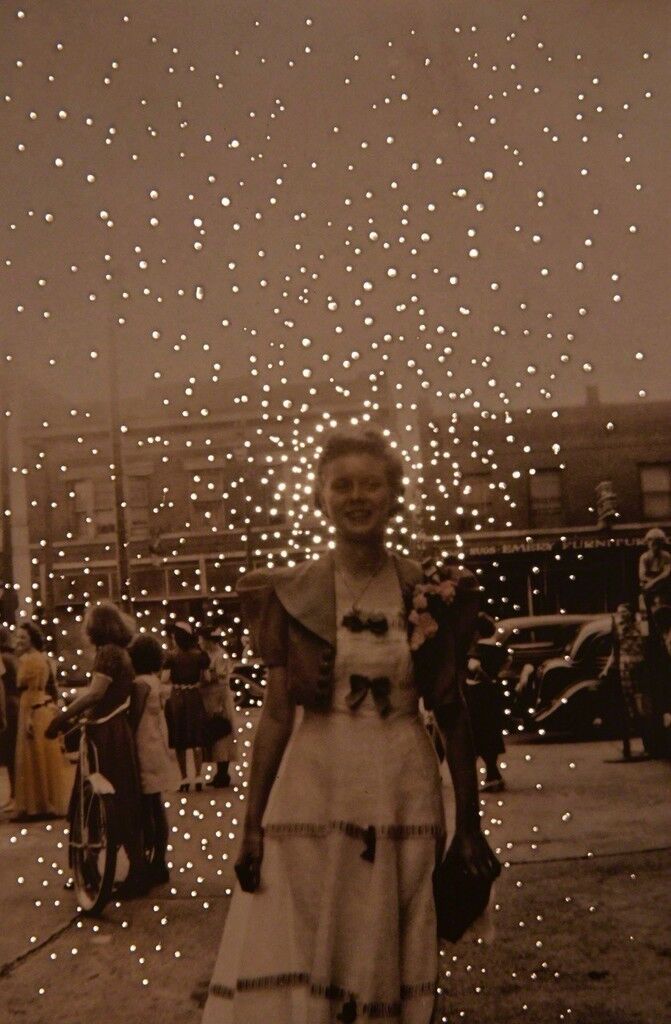 Amy Friend
Tilda, 2014
Pictura Gallery
Photographs may no longer be rare, but it’s their inherent malleability we value. As we continue to fill digital memory with our real memories, we should consider their future shelf life. Will we revisit these moments again, and who might visit them in the future? Our photos will outlive us—not necessarily through the passing down of family albums anymore, but on hard drives and social networks. We can all benefit from being more mindful with where we keep our images and how we back them up. We can also look to the words that inspired photographer
Henri Cartier-Bresson
: “There is nothing in this world that does not have a decisive moment.” By being more considerate of when we take an image, and how many images we accrue, we can learn to cherish them a little more.
Jacqui Palumbo is a contributing writer for Artsy Editorial.
Related Stories