The Physical and Psychological Toll of Photographing War 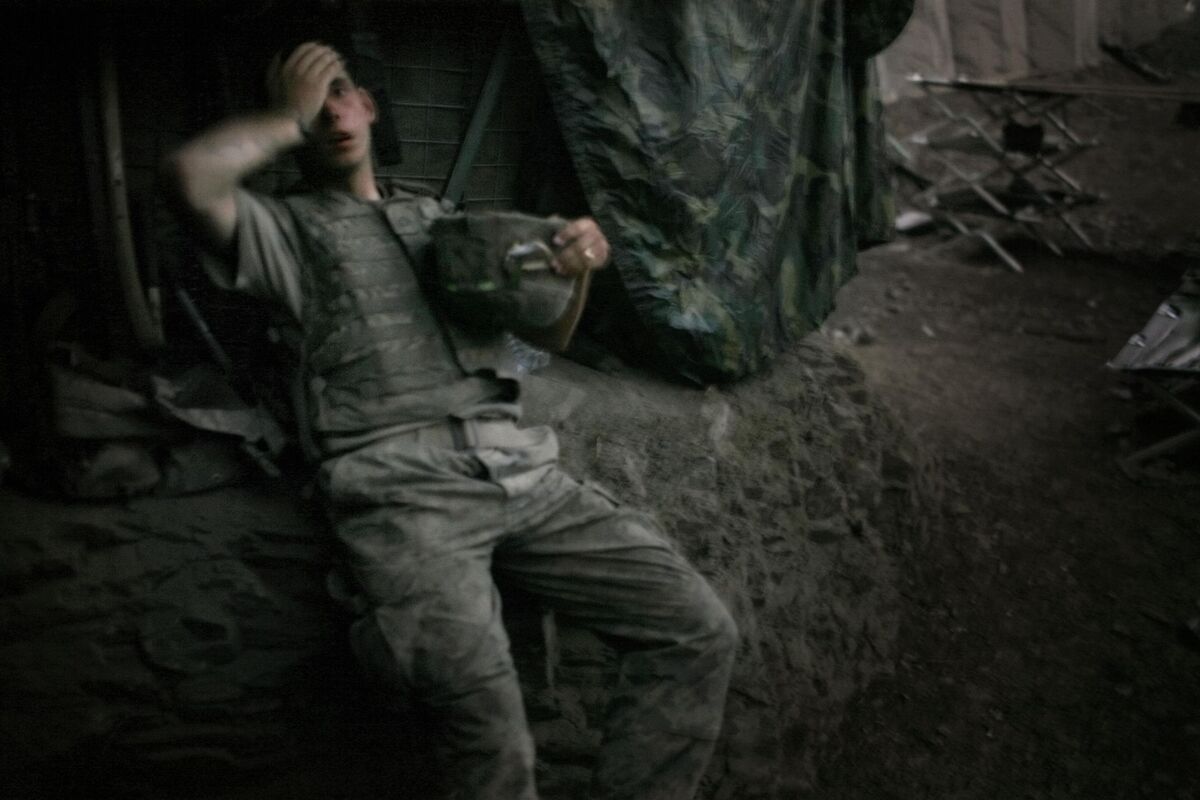 When we speak of artistic sacrifice, the cost is rarely fatal; “blood, sweat, and tears” is often hyperbole. It’s a different story, however, for photojournalists who enter conflict zones. In 1954, famed Magnum agency founder and photographer
Robert Capa
died when he stepped on a landmine in Indochina while on assignment for Life magazine, covering the country’s war with the French. More recently,
Tim Hetherington
perished while shooting the Libyan Civil War in 2011.
Even when photojournalists return from war zones physically unscathed, their experiences can continue to burden their psyches. They might suffer from post-traumatic stress disorder or anguish over their roles in witnessing human tragedy. But they do so to inform the public about the costs of war and to shape news coverage about global events. “When we look at these marvelous images, we find them compelling, moving, and sometimes shattering,” says neuropsychiatrist Dr. Anthony Feinstein. “We don’t think about the men and women who take the photographs.” In a new book, Feinstein aims to rectify that oversight. 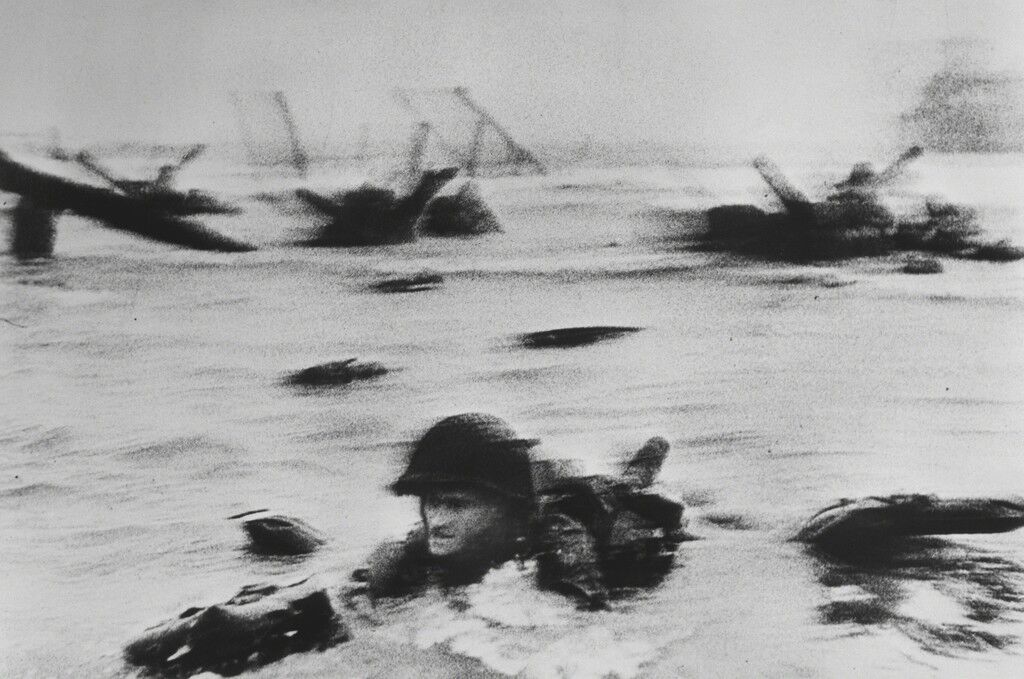 Robert Capa
US troops assault Omaha Beach during the D-Day landings (first assault). Normandy., 1944
Magnum Photos
Feinstein’s book Shooting War (2018) features profiles of 18 photojournalists, including a photograph by each. The pictures are wide-ranging, spanning decades and continents: Poland in the 1940s, Vietnam in the 1960s, Haiti in 2010. If the project is a celebration of their commitment, it’s also grim to process such an endless, global stream of trauma and violence. While photojournalists live on through their images, many victims’ names and stories remain untold.
Throughout the volume, Feinstein emphasizes the “moral injury” that many photojournalists incur, which he defines as the harm to their conscience or moral compass after watching or failing to intervene in acts that don’t align with their ethics. Shame and guilt plague his interview subjects (he spoke to all that are still living), which manifest in both their minds and bodies. About
David Guttenfelder
, who photographed Rwanda in 1994, Feinstein writes: “He chuckles about being unable to shed a prominent startle response, the persistent physiological marker of the emotional trauma that he has endured and weathered.” The atrocities the photographer witnessed still affect his everyday movements and reactions.
Guttenfelder arrived in Rwanda following the genocide of 800,000 Tutsis in just three months. Corpses still littered the earth. For five years, Guttenfelder traveled around Africa, capturing conflict. In Freetown, Sierra Leone, a group of three men attacked his vehicle while he rode in a convoy with cameraman Miles Tierney and writer Ian Stewart. Tierney died and a bullet lodged in Stewart’s brain (though he ultimately survived, with Guttenfelder’s assistance). While escaping, Guttenfelder continued to take pictures. 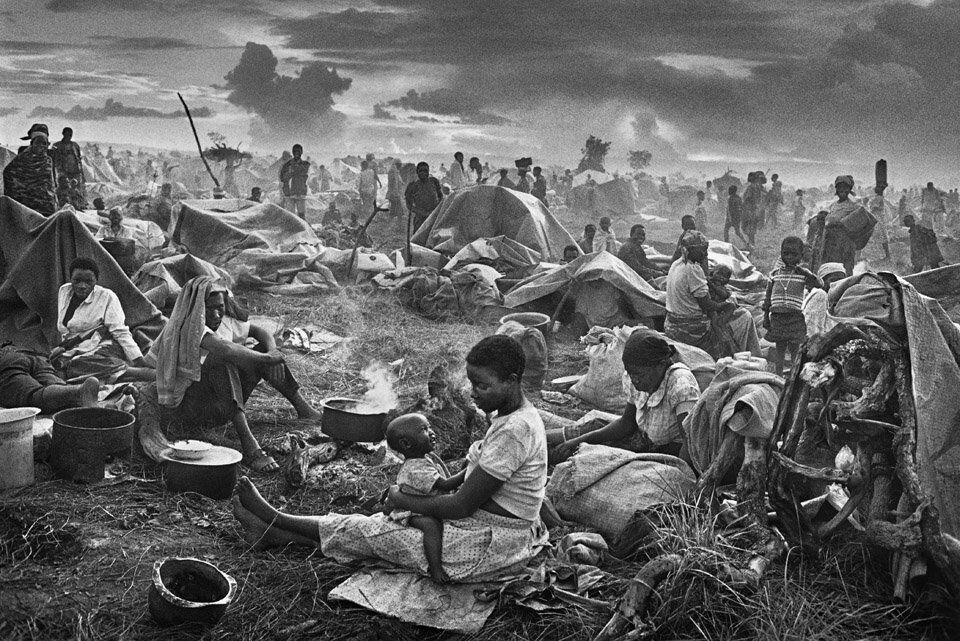 Advertisement
“Guttenfelder’s mental state following the Freetown attack revealed a competing mix of emotions,” Feinstein writes. “Euphoria and gratitude at survival alternated with survivor guilt.” Nightmares plagued the photographer, and memories of the assault played on loop, unbidden, through his head. He coped by immersing himself in yet another conflict—the civil war in Kosovo—but trauma followed when a sniper shot accompanying Chilean journalist Abner Machuca. The following year, a cameraman friend of Guttenfelder’s died, as well, in Sierra Leone. “Having cheated death so many times…Guttenfelder has come to terms with the possibility that war may one day claim him too,” Feinstein concludes. “What has allowed him to venture repeatedly into the front lines is his conviction that the work he does is important.”
Sebastião Salgado also suffered from the atrocities he saw in Rwanda. He was plagued with severe physical ailments—infections, an abscess—as stress weakened his immune system. Feinstein writes that though Salgado’s profession “spared him the dreaded nine-to-five job, unlocked his creativity, and allowed him to inform society at large...it also confronted him with a deeply troubling paradox, namely humanity’s nobility of spirit alongside its proclivity for unrivaled cruelty.”
Though much of the book is indeed filled with suffering and death, lightness and even humor occasionally seep into Feinstein’s profiles. Tim Page—the inspiration for
Dennis Hopper
’s perpetually stoned character in Apocalypse Now (1979)—is upfront about his own thrill-seeking. In his own words, the Vietnam War offered him “good-looking women, great food, beaches, the best dope.” The career provides perpetual adrenaline rushes, adventure, and a modicum of notoriety. Nevertheless, Page, who also suffered significant war wounds throughout his photojournalism career, offered Americans some of their most important, public opinion–shifting images about the conflict in Vietnam. 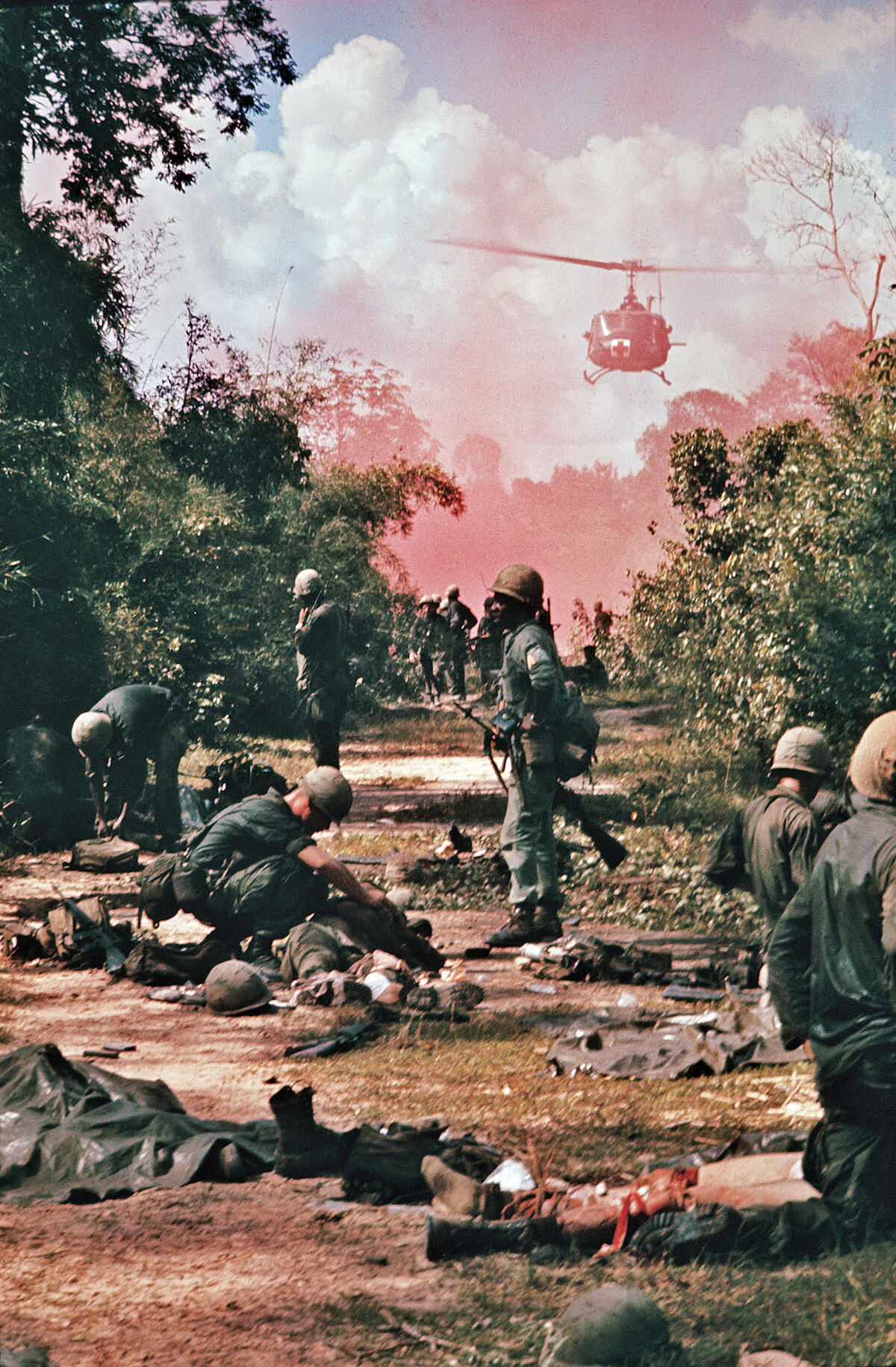 “I believe that every one of the photographers want to tell the story of a conflict or the people who have been dispossessed,” Feinstein offers. Yet his profiles reveal how stories can be slanted; it’s a good reminder to approach news photographs with an eye of skepticism—there’s no such thing as a totally objective or impartial lens. In Page’s photograph War Zone C—Ambush of 173rd Airborne (1965), a lush, psychedelic pink haze softens the blow of seeing the fallen soldiers on the ground. In 1992, Greek photographer Yannis Behrakis aims his lens downward from a very literally elevated position, to capture a group of men tussling to grab a loaf of bread.
While many of the pictures focus on militants—an exhausted soldier in Afghanistan’s Korengal Valley, photographed by Tim Hetherington; Serbian soldiers just after they’ve murdered three civilians on the street in Bosnia, photographed by
Ron Haviv
—
Alexandra Boulat
captures female perspectives. In her image of girls greeting soldiers in Kosovo, she depicts three young women and specifically chooses to leave men out of the frame. In the background, one woman gazes beyond the frame, her face serious. Yet the woman in the middle purses her lips in a smile, and the woman in the foreground even opens her mouth in laughter as she holds a bouquet of red flowers. Behind them, buildings burn. In Boulat’s shot, their laughter and joy take precedence over the destruction.
Boulat died of a brain aneurysm at just 45 years old. For his book, Feinstein interviewed her parents, attempting to find the root of Boulat’s motivations. He writes of Boulat’s “conflicting ambitions” to “settle down in Paris and lead a more conventional life” while experiencing “a restlessness, a never-ending, never-satisfied drive to return to places on the edge.” It’s an extremely heightened version, of course, of the choice many women face—whether or not to have children, who will, to some degree, stall a career. Though Feinstein skirts the issue, questions of feminism itself pervade the story he tells about Boulat and the image he selects to represent her. Indeed, he treats French photojournalist Laurence Geai the same, describing her as “petite, very feminine, fashion-conscious.” According to him, her appearance is the “antithesis” of her brutal pictures. In the shot he chooses from her oeuvre, one man drags a bloody male body across the street. 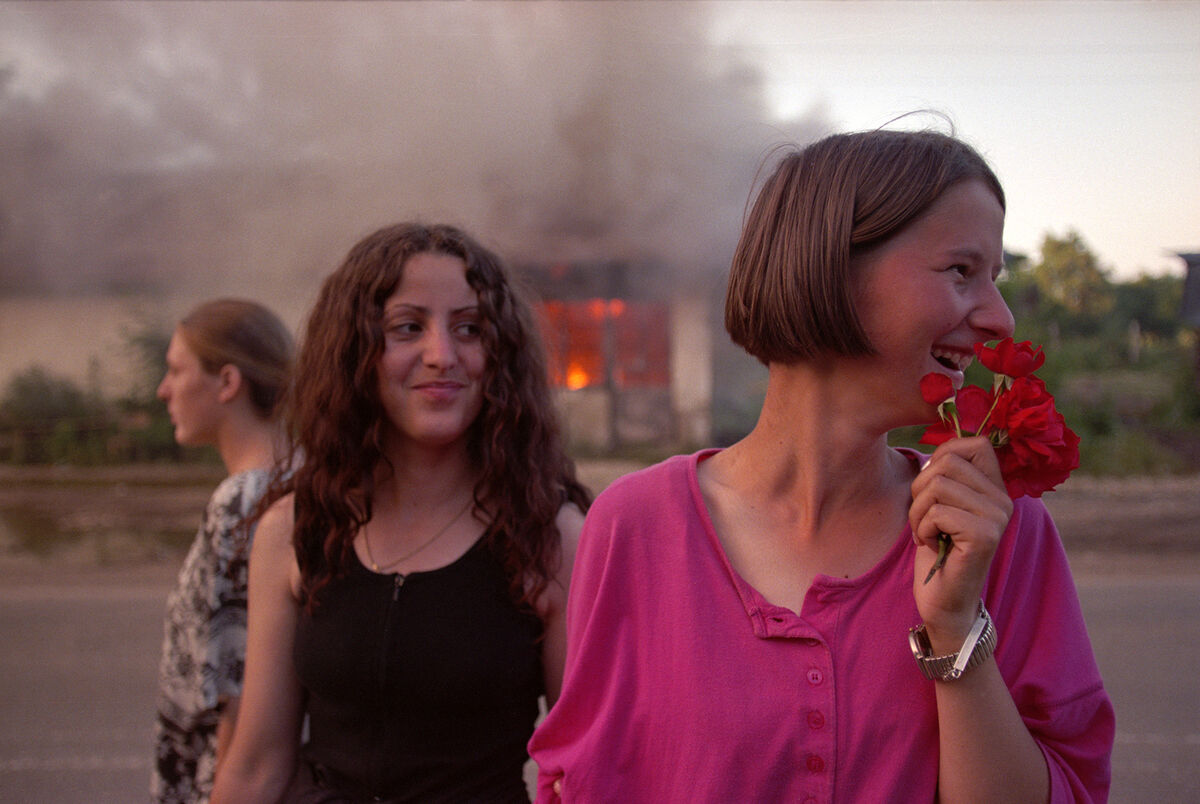 While Boulat captures loveliness and a moment of grace, Geai frames the worst of male aggression. Feinstein also describes Geai’s explicit attempts to stop civilian killings. She attempted to establish connections with murderous men in the Central African Republic, asking them questions like “What does it feel like to kill a child when you have a child of your own?” These two profiles, in particular, raise additional questions about what it means to photograph war with a feminist or humanitarian lens; all of the profiles ask what it means for these photojournalists to return to relatively normal, stable lives when their subjects cannot.
Though Boulat never suffered significant wounds in battle, Feinstein suggests that her devotion to her work ultimately prevented her from getting the medical treatment that may have saved her life. In Ramallah, she took aspirin to treat her worsening headaches, which ultimately exacerbated the real issue—an aneurysm. To receive medical attention, Boulat had to journey through Ramallah to Jerusalem, facing multiple checkpoints. “By the time she was assessed by the neurosurgeons in Israel, her coma was deep and the prognosis bleak,” Feinstein writes. Living in a war zone afforded her unique photographic opportunities, but fewer options for her own care.
Ultimately, Feinstein asserts that it’s impossible to escape such a profession unscathed. His subjects risk their lives, mental health, and well-being to offer images about the truth of war; the least we can do, he suggests, is consider the equally complex stories that lie just behind the camera.
Alina Cohen
Related Stories