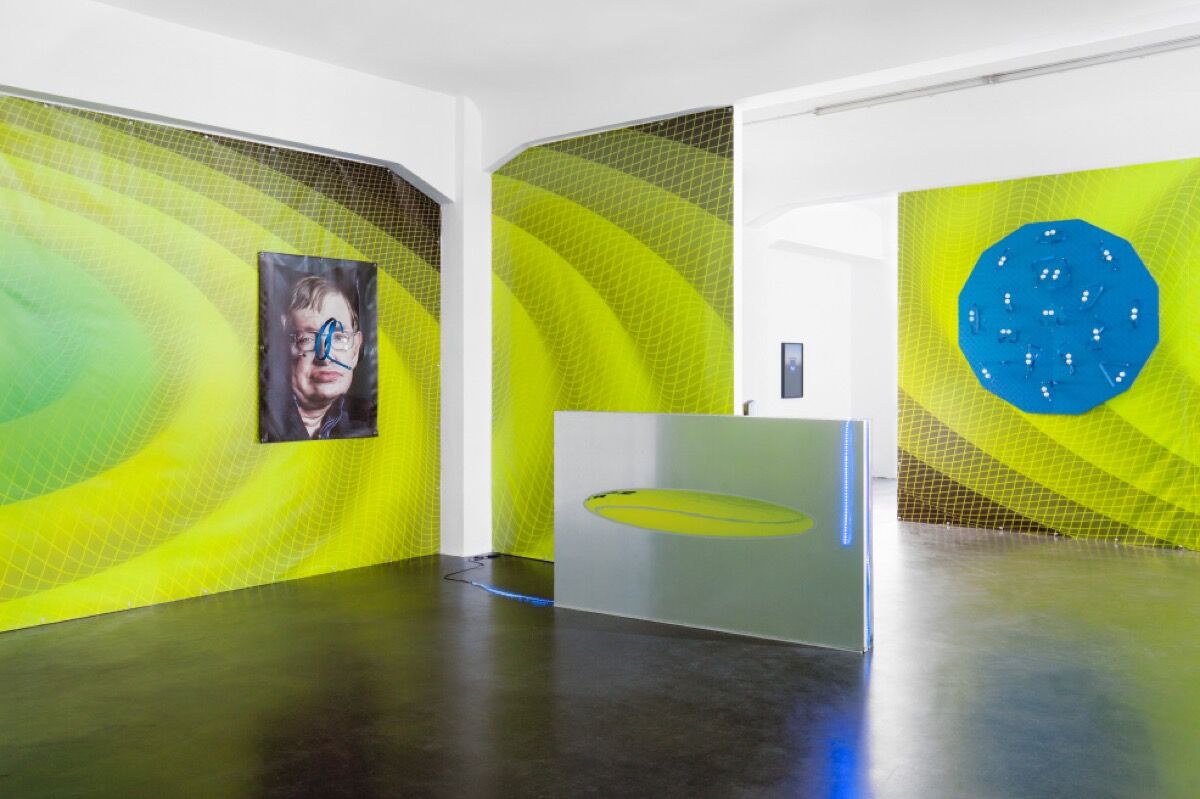 1.3 billion years ago, two black holes collided. Einstein posited a century ago as part of his general theory of relativity that such an event would send gravitational waves, or ripples into the fabric of spacetime, out into the universe. And at 10:30am on February 11th of this year scientists at the Laser Interferometer Gravitational-Wave Observatory (LIGO) finally detected these gravitational waves, one of the most significant discoveries in the recent history of experimental physics.
Last Saturday, those waves made their way into Alexander Levy’s Berlin gallery, for Luca Pozzi’s solo exhibition, “Discovery and Premonitions,” curated by Carson Chan. Levy’s gallery walls have been covered with green representations of disrupted spacetime, the colliding black holes replaced by black tennis balls. Metal slabs from equipment pulled from the legendary CERN particle accelerator sit throughout the space. And a portrait of Stephen Hawking looms in the corner.
For nearly a decade, the 32-year-old Italian artist has infiltrated some of the world’s most prestigious scientific communities, driven by an insatiable curiosity about theoretical physics—and a desire to share new discoveries with the outside world. The two massive aluminum slabs (Super Layer, 2016) are the spoils of his long-term collaboration with members of the CERN (European Organization for Nuclear Research) community, the current mecca of experimental physics. They were pulled from CERN’s Large Hadron Collider (LHC), a nearly 17-mile-long ring of superconducting magnets which accelerates beams of subatomic particles to nearly the speed of light before making them collide and recording the results.
Perhaps its most significant discovery thus far was in 2012 when the elusive Higgs Boson was observed for the first time. Also known as the “God particle,” the Higgs was the last unconfirmed particle in the Standard Model of physics. It validated a thousand scientists’ some 30 years of blood, sweat, and tears building the LHC and many more years still of theoretical physicists’ inquiries. “This mysterious bosonic field is responsible for giving mass to everything,” says Pozzi. If you’re interested in knowing anything about a given piece of matter, he says, “before anything else, chat with the Higgs. That’s why I love it; I was looking for the origin of dialogue.” 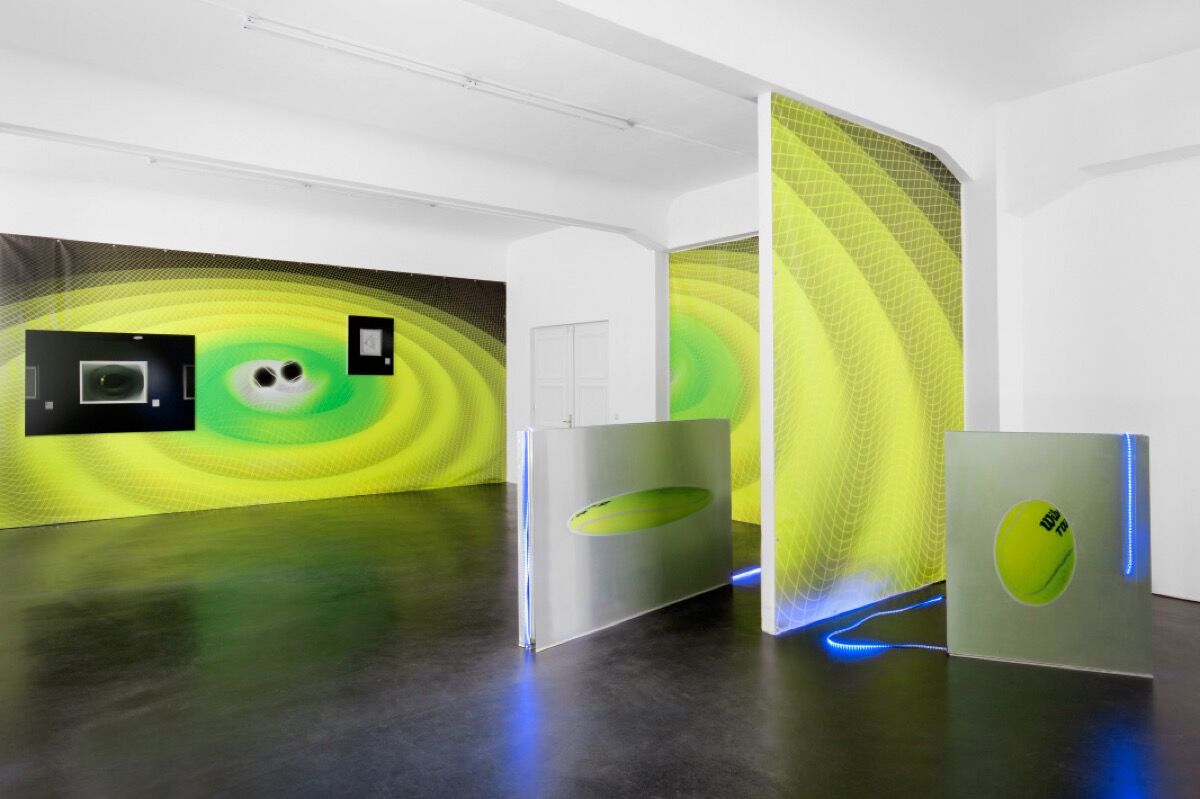 Pozzi wasn’t always mired in the most complex corners of scientific inquiry. He was, of all things, a painter in the early days of his artistic career. But in 2005, while honing his practice in Milan, he began to read up on theoretical physics. Brian Greene’s tome The Elegant Universe sparked a passion in the artist for quantum gravity. Many pages and conflicting theories later Pozzi decided he had to go directly to the source. “I needed more,” he says. He began reaching out to thought leaders in the industry and visiting laboratories all over the world, eventually leading to his first visit to CERN in 2009.
Grand theories of physics and the tools used to prove them are now as much a medium for Pozzi as oil was during his time as a painter. “Science for me is a canvas, the grammar of math and quantum gravity for me is the stretcher,” he says. Take Detectors (2015), for example. The wall-mounted blue polygon is dotted with pairs of ping-pong balls suspended from intertwined lengths of blue powder-coated steel, attracted together by magnets, as if frozen in time the moment before collision. Inspired by the LHC, the work (and others from the series from which it arises) points to one of physics’s more beautiful phenomenons, quantum entanglement. (It’s another recently proved Einstein theory—he called it “spooky action at a distance.”)
In Pozzi’s piece, if you touch one ping-pong ball, the other jitters. In quantum entanglement, action on one entangled particle instantaneously affects its pair, even when that particle is placed at the opposite side of the universe. “I was imagining that quantum entanglement might influence not only the interconnected spin of the particles but also the behaviour of interconnected disciplines,” explains Pozzi of the piece. “I was thinking of science and art as this pair of macro structures where information can travel instantaneously, even quicker than the speed of light.” 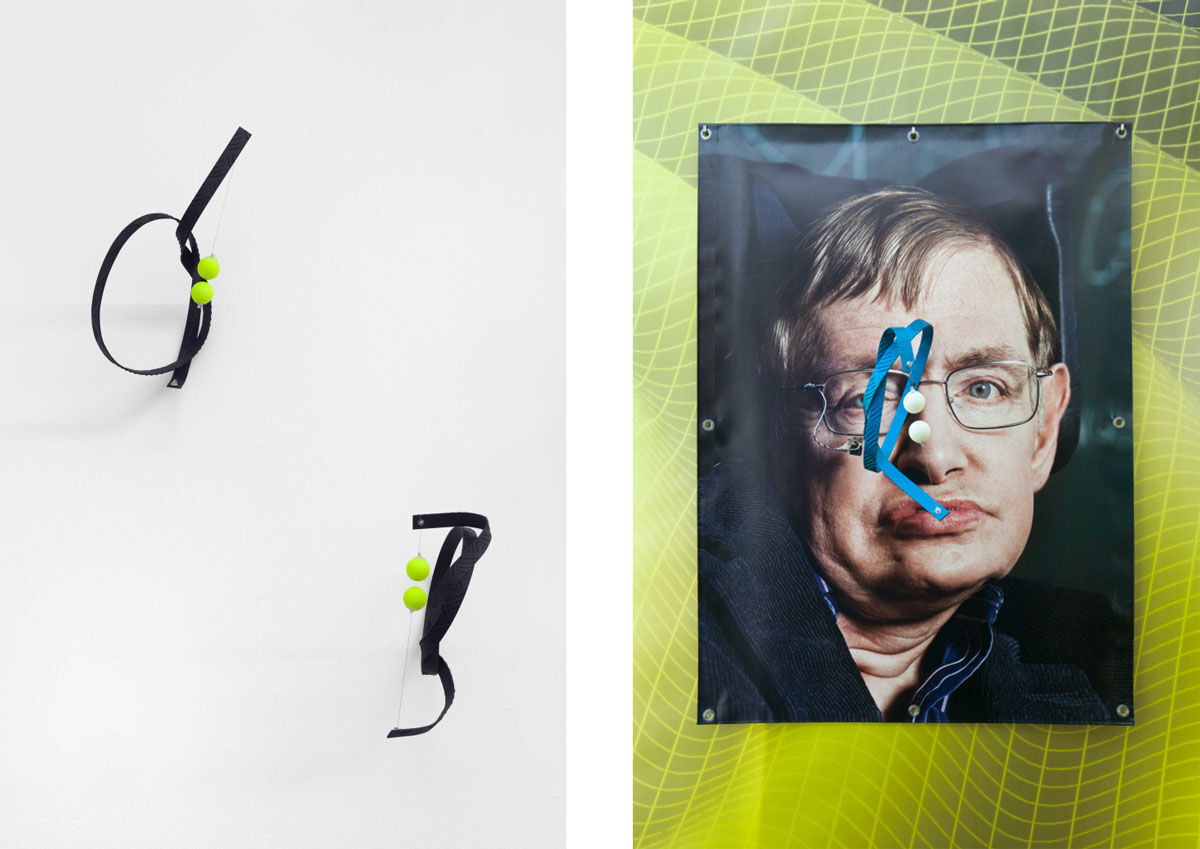 Advertisement
Particles aren’t the only strangely linked elements in the show. The ears of those who watched the YouTube video LIGO put out this spring, capturing the chips and chirps of the gravitational waves caused by the two colliding black holes, will perk when entering Levy’s gallery. Listen for long enough, however, and it becomes clear that the soundtrack isn’t actually that of the black holes but the eerily similar sounding calls of gibbons baboons. Pozzi first heard the mammals’ calls in a national park in Thailand in 2009 and immediately linked their frequency with that of a simulation of what gravitational waves would sound like when eventually recorded. This February, that simulation’s hypothetical chirps were confirmed.
The gravitational-wave-like gibbons mate for life. And it’s this fact that exposes a core point of Pozzi’s exhibition. “The show is actually about love and habitats and bridges, sharing experiences and materials, and helping communities create global research,” says the artist. For Pozzi, it’s not necessary for a viewer to grasp the extremely complex theorems of quantum physics, but instead to be inspired by the possibility both art and science hold to expand consciousness. “It’s not important that they understand science; it’s important that in my work, science becomes beautiful—and not boring.”
Molly Gottschalk is Artsy’s Lead Visuals Editor.
“Discovery and Premonitions” is on view at Alexander Levy, Berlin, Jun. 25–Jul. 30, 2016
Related Stories