From Picasso to Noguchi, 11 Artists Who Designed Spectacular Playgrounds

Demie Kim
Feb 23, 2017 2:47pm
Playgrounds as we know them today can be traced back to the sand gardens of late 19th-century Germany, which resemble what we now know as sandboxes. But it wasn’t until the 1940s that urban planners and landscape designers across Europe broke from that restrictive holding-pen style, in favor of experimenting with what they called “adventure playgrounds.” These new models were meant to foster problem-solving and collaboration. Playgrounds, they argued, could become neighborhood hubs and contribute to the physical, emotional, and cognitive development of children. And they were right.
As new playground commissions emerged in cities around the world, artists began to set their sights on these spaces, as vehicles to inspire creativity and curiosity in children—though also as outlets for their own imaginations. From Jean Dubuffet’s whimsical garden in the Netherlands to Benjamin Dominguez’s “monster park” in Southern California, here are 11 of the most innovative and inspiring playgrounds designed by artists. 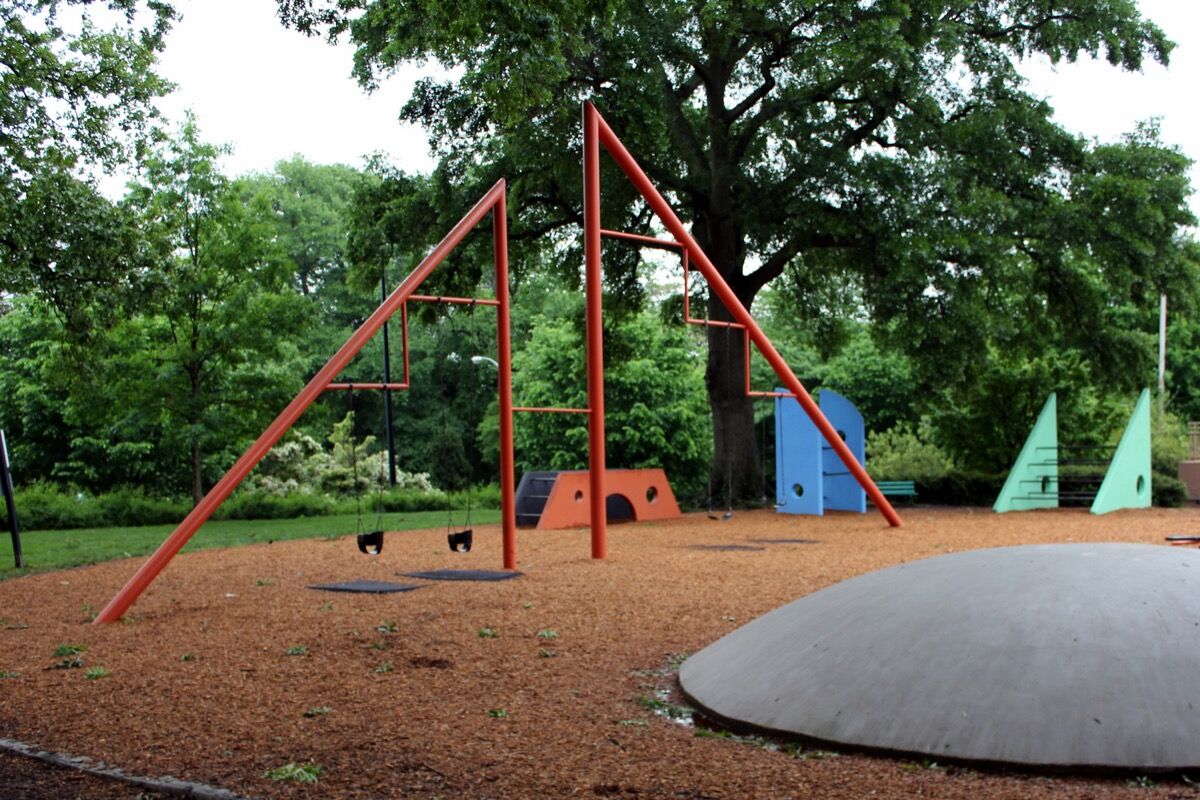 The Japanese-American sculptor and designer, known for his biomorphic sculptures made of natural materials, began planning landscapes for children as early as 1933. But it would be decades before one of
Noguchi
’s designs was realized in the United States. The artist encountered a series of obstacles in New York, ranging from safety concerns to the onset of World War II. During those decades Noguchi continued to hone his vision of a space that would spark creativity and adventure, encouraging children to explore the natural world rather than expressly directing an activity. “I think of playgrounds as a primer of shapes and functions; simple, mysterious, and evocative; thus educational,” he wrote in 1975. His first (and only) American playscape fills a one-acre space in Atlanta’s Piedmont Park with colorful metal and concrete structures, including climbing blocks, a low circular mound, and a stepped tower. 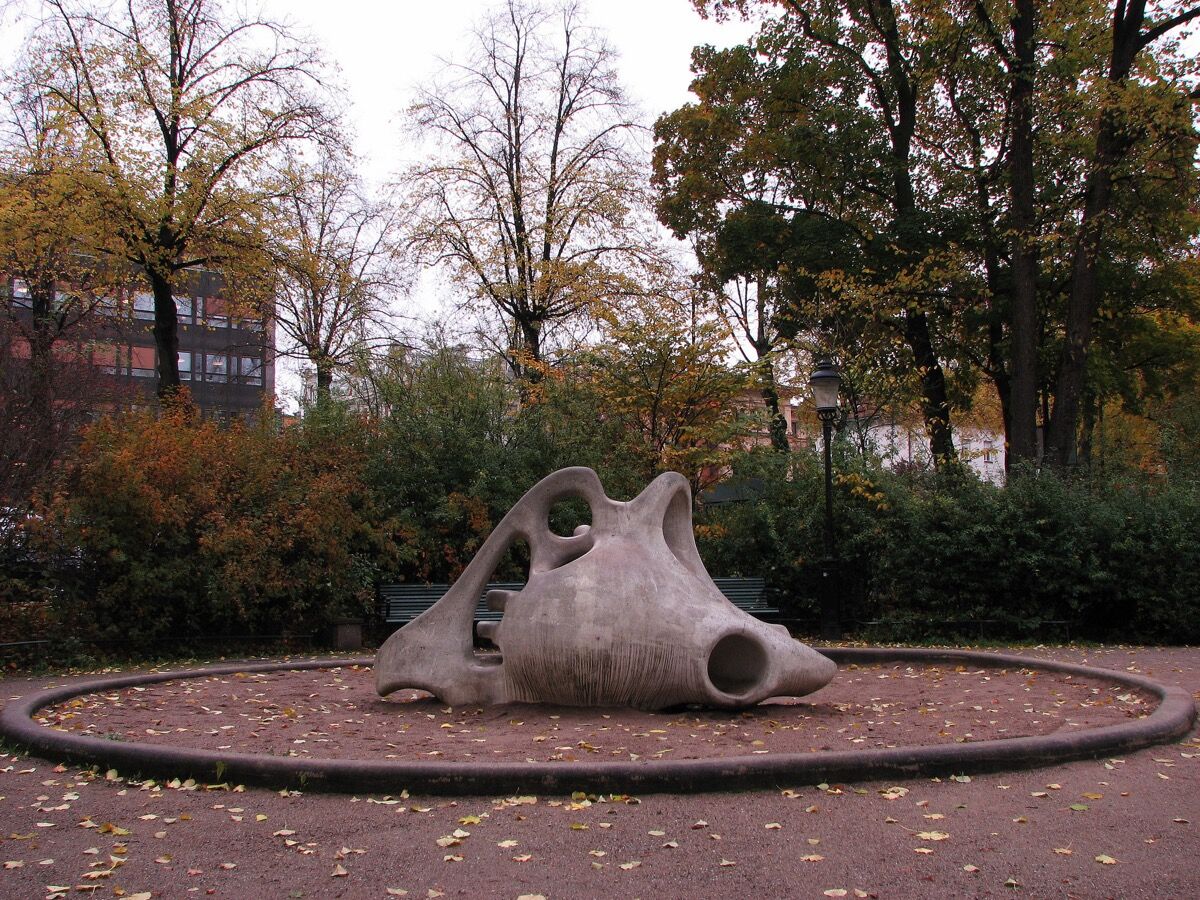 Advertisement
This work by Danish sculptor Moller-Nielsen was designed for a Stockholm park as part of a pioneering initiative to improve the quality of life in the rapidly growing city. Her biomorphic structure, sporting various punctures and protrusions, was revolutionary in its time for its unique approach to art and play within public space. Moller-Nielsen’s work helped spark an exchange across Europe, the United States, and Japan about the positive effects of playgrounds on urban children and families. 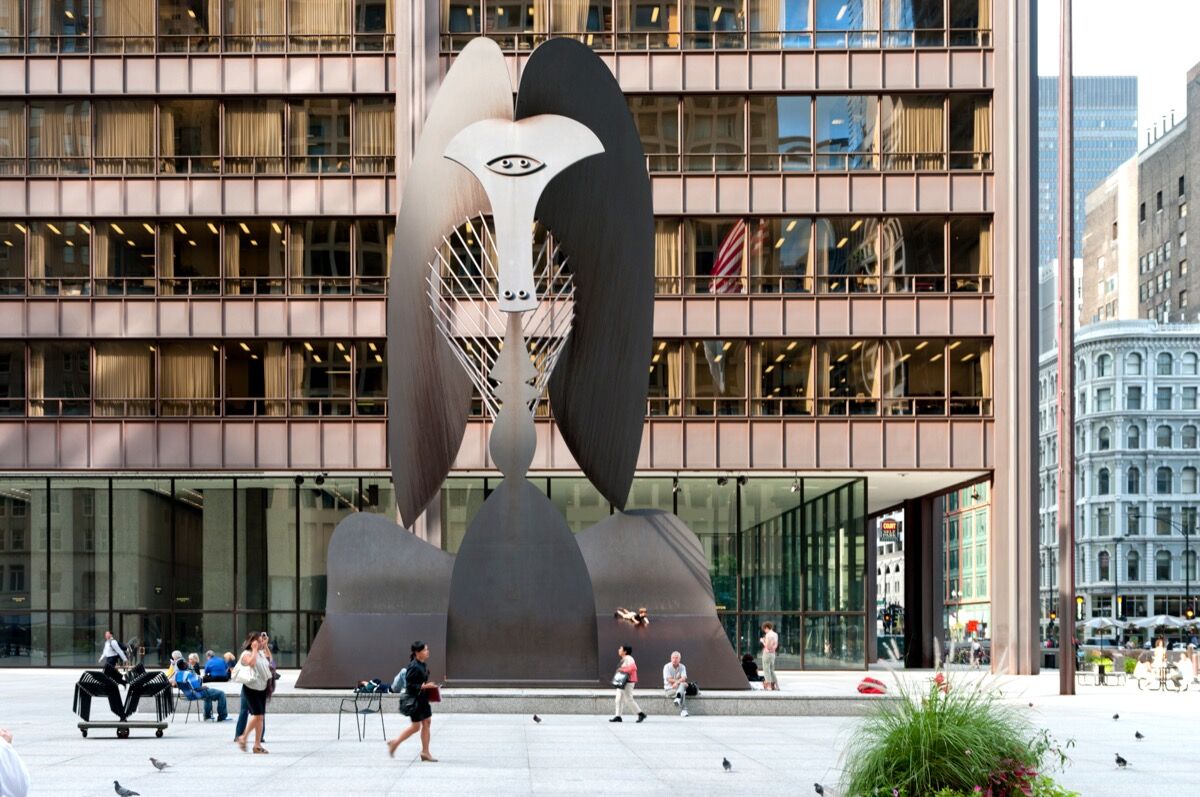 This 162-ton, 50-foot-tall
Picasso
sculpture in Downtown Chicago’s Richard Daley plaza was originally intended as a work of public art. But as kids began clambering up (and even skateboarding on) the steel ramp at its base, the work quickly transformed into a makeshift jungle gym. Now considered an icon of the city and beloved by generations of Chicagoans, Picasso’s Cubist creation was initially scorned. It marked a stark departure from the city’s earlier public sculptures of civic heroes, paving the way for a new wave of public art by the likes of
Alexander Calder,
Marc Chagall
, and
Claes Oldenburg
. 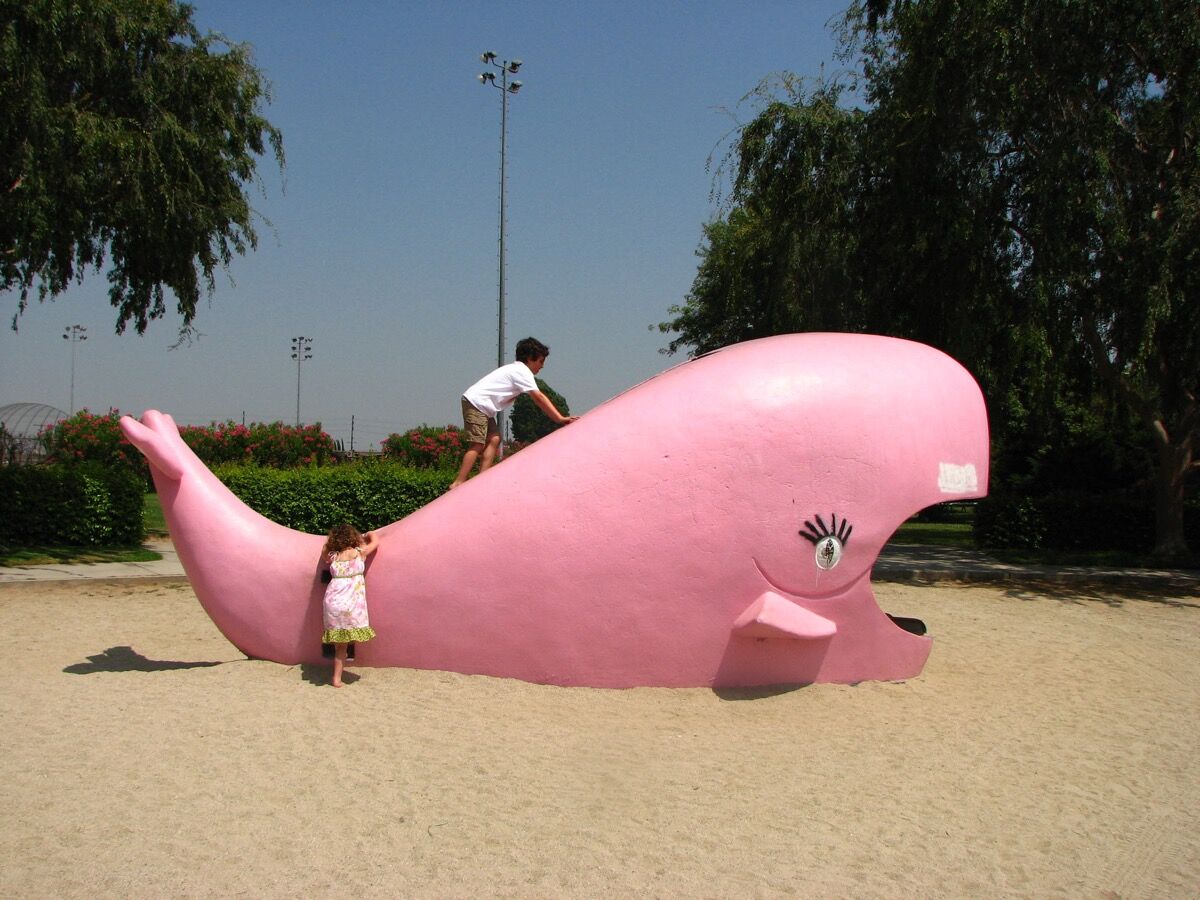 This critter-filled playground in a Los Angeles suburb is one of the only remaining creations of lesser-known Mexican artist Benjamin Dominguez, who completed the project at age 70. The 14 sea creatures—including a teal-green octopus, a pink whale, and a two-headed serpent—were selected specifically for their smooth, curvilinear forms, which could easily be translated into slides and safe structures. The “monster park,” as it has come to be known, is so cherished by locals that they banded together to successfully protest its planned demolition by the city in 2006. 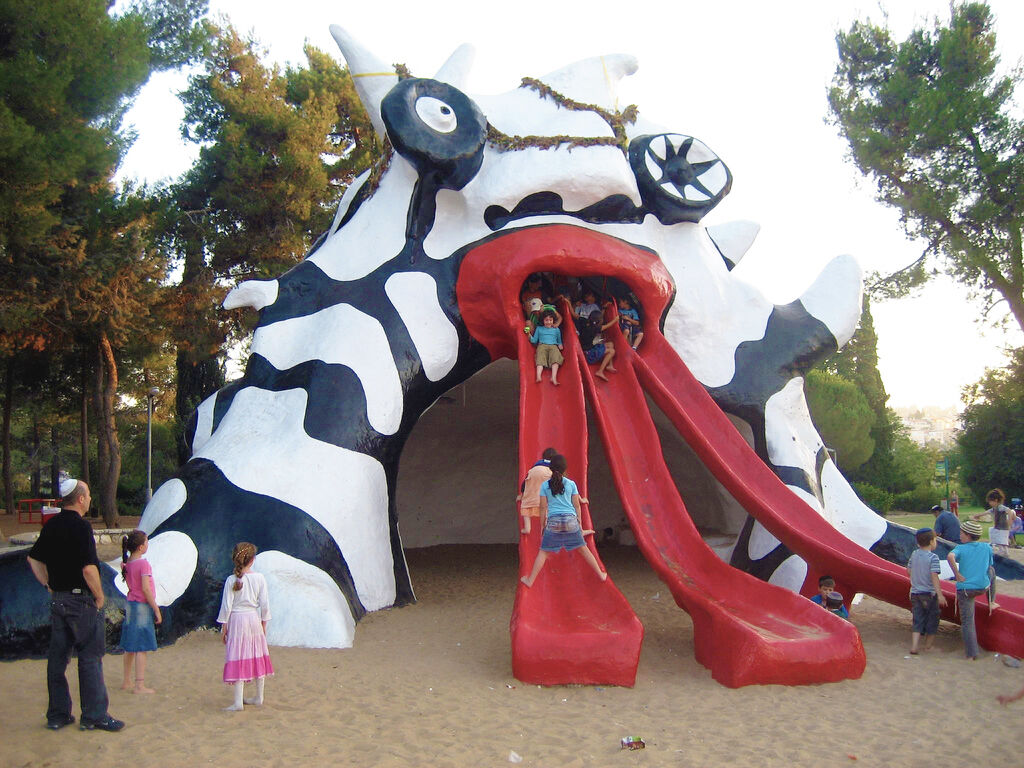 City authorities initially rejected Golem, a fantastical playground design by French
Pop
artist
de Saint Phalle
, deeming it too frightening for children. “Scary things are good because they help children conquer their fears,” countered the artist, citing the Freudian psychologist Bruno Bettelheim’s theory that fairy tales prepare children to overcome their earliest existential crises. Nicknamed “the monster” by local residents, the looming black-and-white structure features three red tongues sliding into a sand-box, as well as a cavern underneath for braver children to explore. 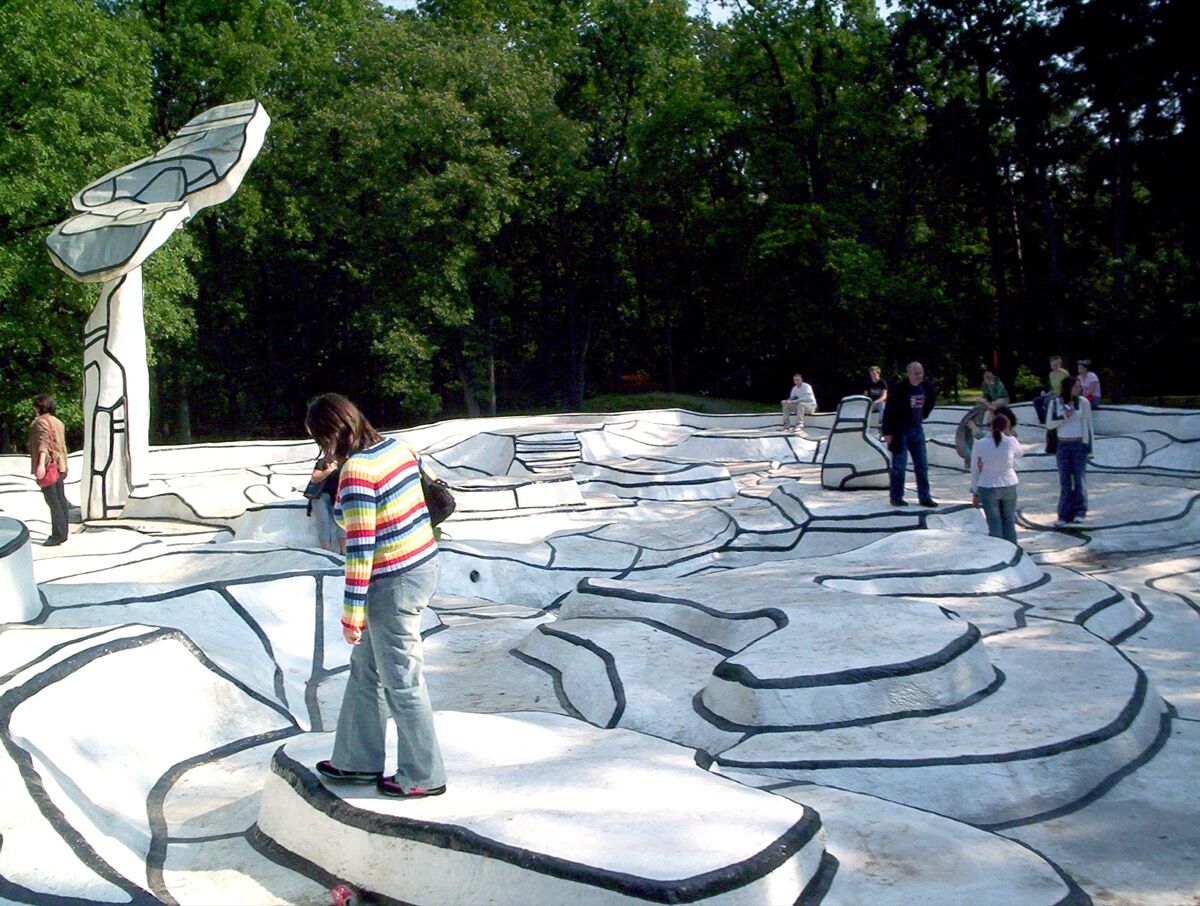 Like most of his monumental public sculptures,
Dubuffet
created Jardin d’émail (the “garden of enamel”) without a specific location in mind. It ended up nestled within the Netherlands’s Kröller-Müller Sculpture Garden, its stark black and white design a playful contrast to the verdant surroundings. The whimsical landscape offers an escape from reality; in the words of the French artist, “an artificial garden in a garden of real trees and real lawns.” The work is at once a sculpture, a three-dimensional painting, and an opportunity to explore the iconic artist’s work from the inside out. 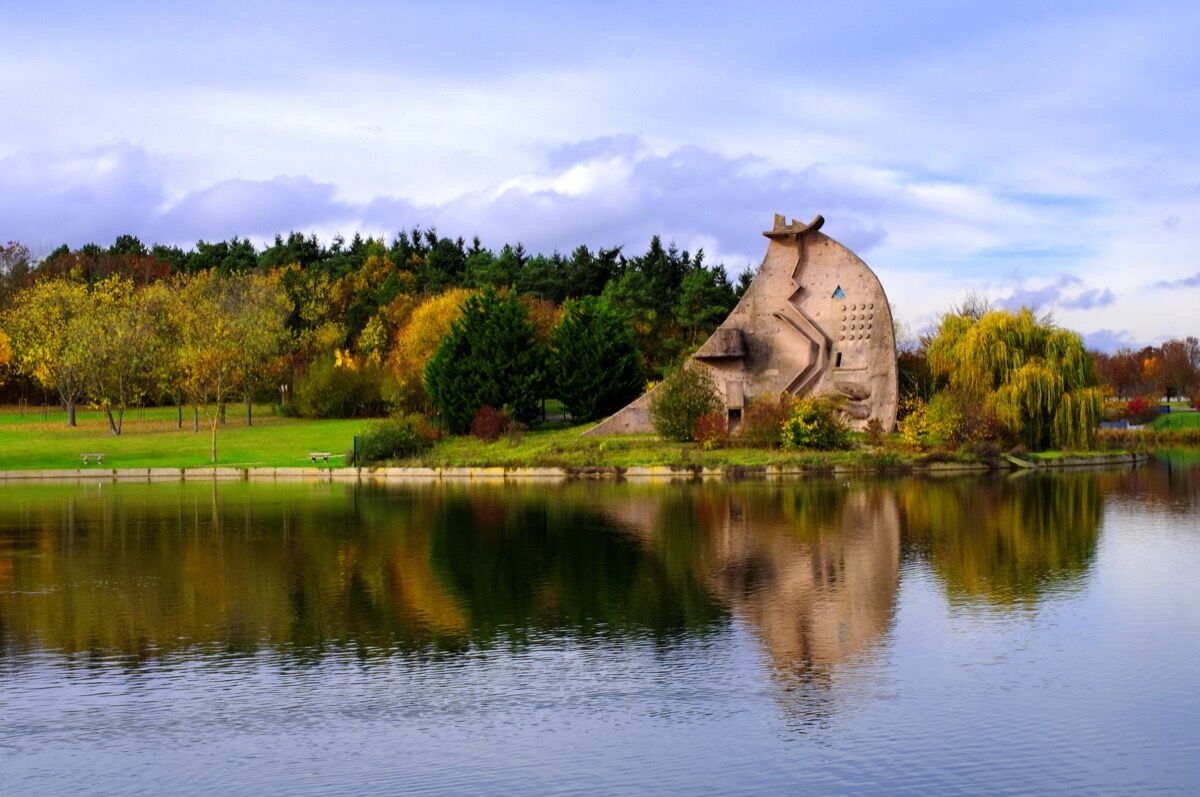 “The mountain will come to you,” said Székely in 1975, in anticipation of a project he had designed for the new urban development of Évry, outside of Paris. The mayor had commissioned the Hungarian sculptor to create a climbing wall, the first of its kind in France, inspired by the famous boulders of Fontainebleau. Easily accessible from the town’s shopping center, the resulting structure—a surrealist-inspired take on sailboats gliding across the neighboring pond—was intended to bring the thrill of mountain climbing to nature-seeking urbanites. 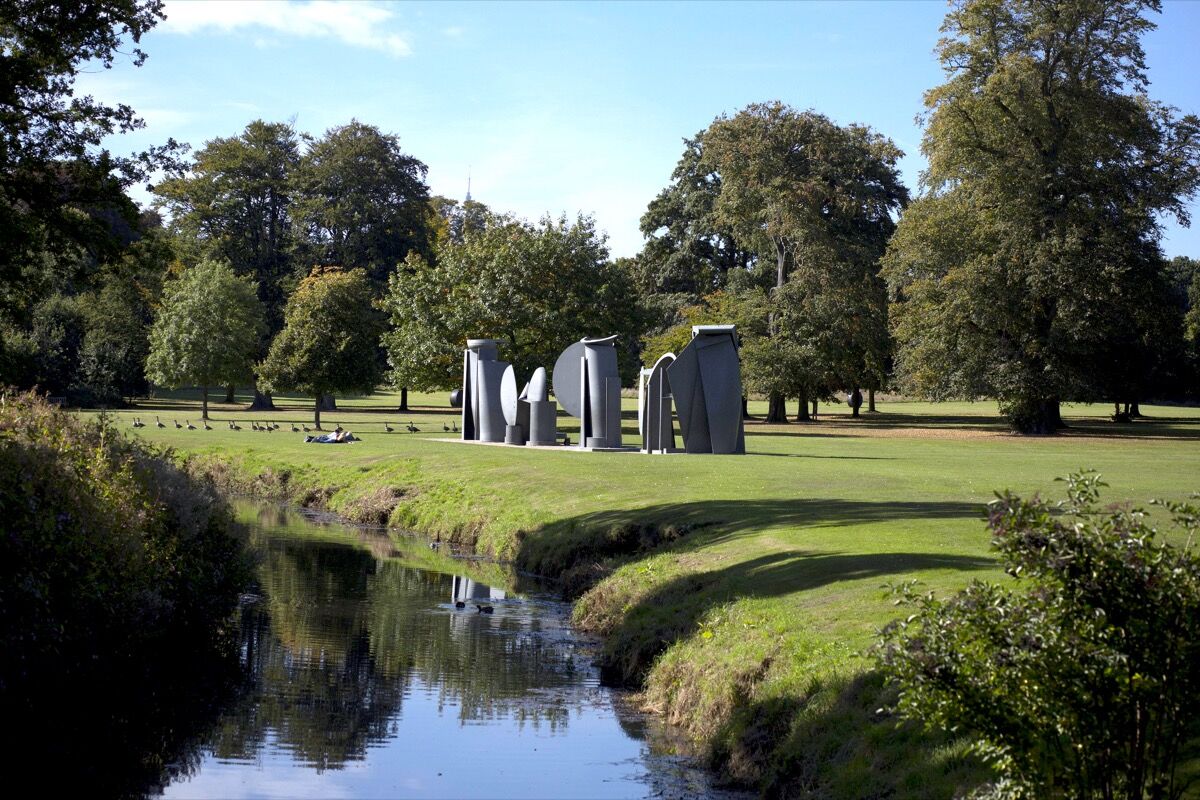 Located in West Bretton’s scenic Yorkshire Sculpture Park, this “playful promenade” by abstract sculptor
Caro
is the ideal site for a game of hide-and-seek. The five-part steel sculpture, painted in muted grey-green, was originally commissioned for a major exhibition of 20th-century British sculpture in Paris’s Tuileries Garden. The towering geometric structures, each a unique assemblage of semi-circles, arches, and cylindrical forms, invite passersby of all ages to venture inside and explore. 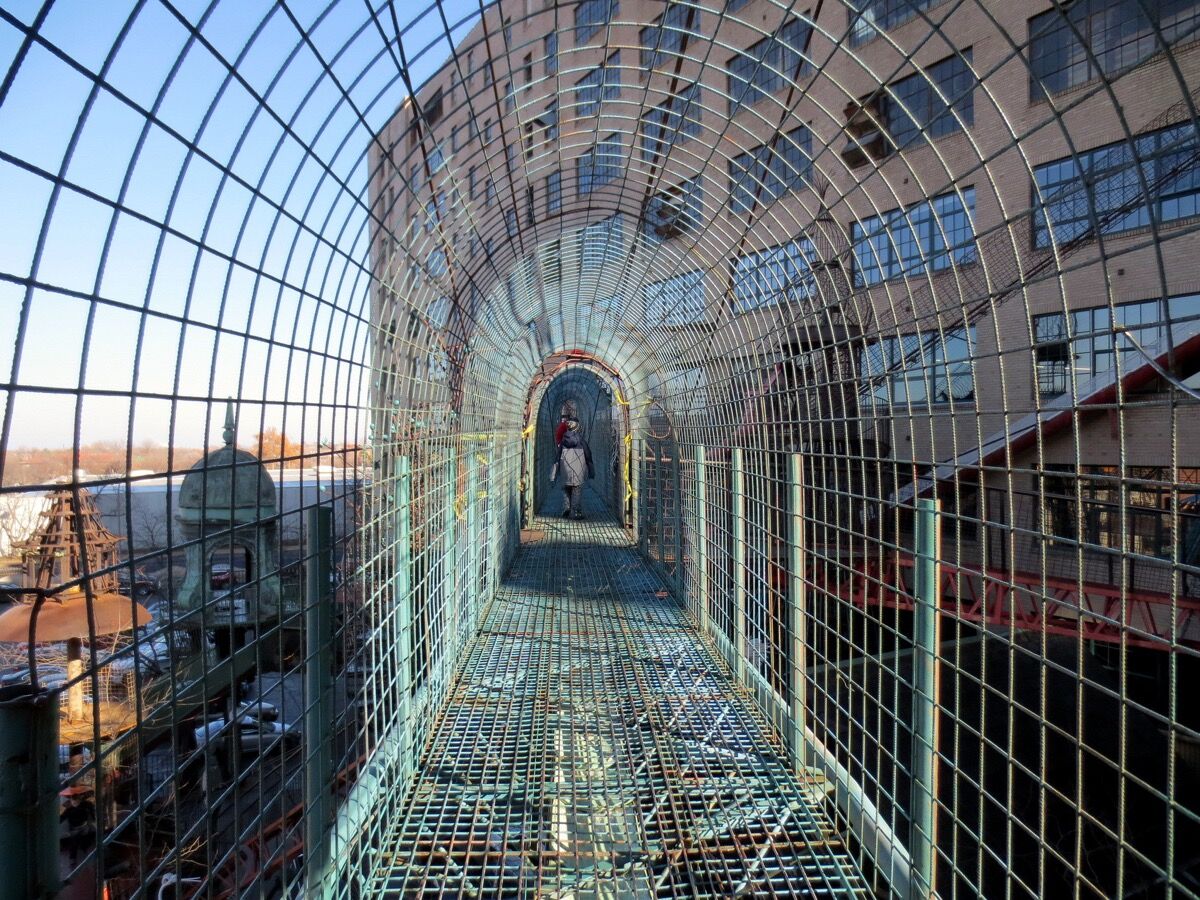 Part museum, part playground, part jungle gym, part recycling project, Bob Cassilly’s City Museum defies easy categorization. Housed in the 600,000-square-foot former International Shoe Company, the space features a 10-story slide, two airplanes, and a 1940 Ferris wheel on its roof. Most of these objects and structures were reclaimed from the city of St. Louis, including salvaged construction cranes and old chimneys. Although Cassilly passed away in 2011, a group of some 20 artists nicknamed the “Cassilly Crew” have continued to tinker with the space ever since. Recent additions include an indoor treehouse and a network of underground tunnels. 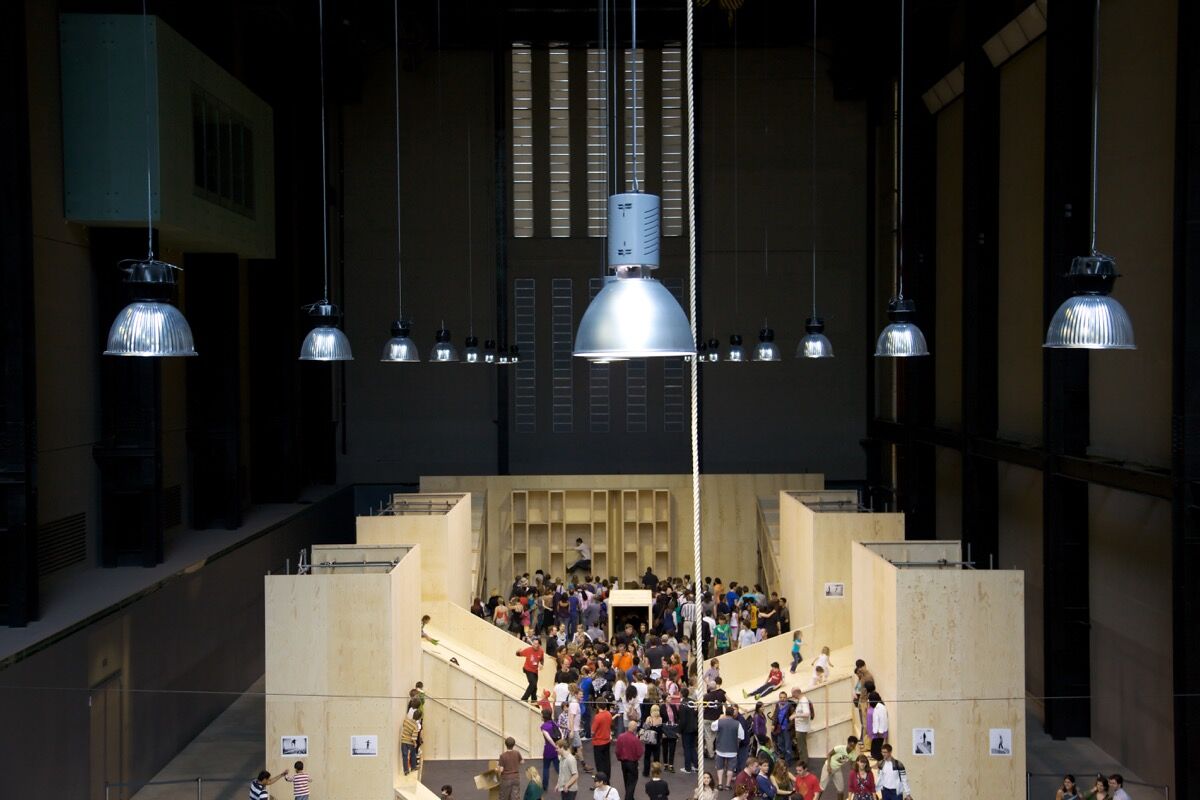 When it debuted in 1971,
Morris
’s Bodymotionspacesthings marked the first time an art gallery had asked visitors to physically interact with the work on view. Some 1,500 ecstatic visitors of all ages clambered on see-saws and tiptoed across tightropes—but their fun was short-lived. The overwhelming response from the public forced the installation to close a mere four days after opening. As the Times reported, museum staff “were not able to cope with the frantic means of emotional release that the exhibition became. An orderly pandemonium was expected, but pandemonium broke out.” Over a holiday weekend in 2009, Morris’s playhouse was recreated in the Tate Modern’s Turbine Hall for another fleeting four-day period. 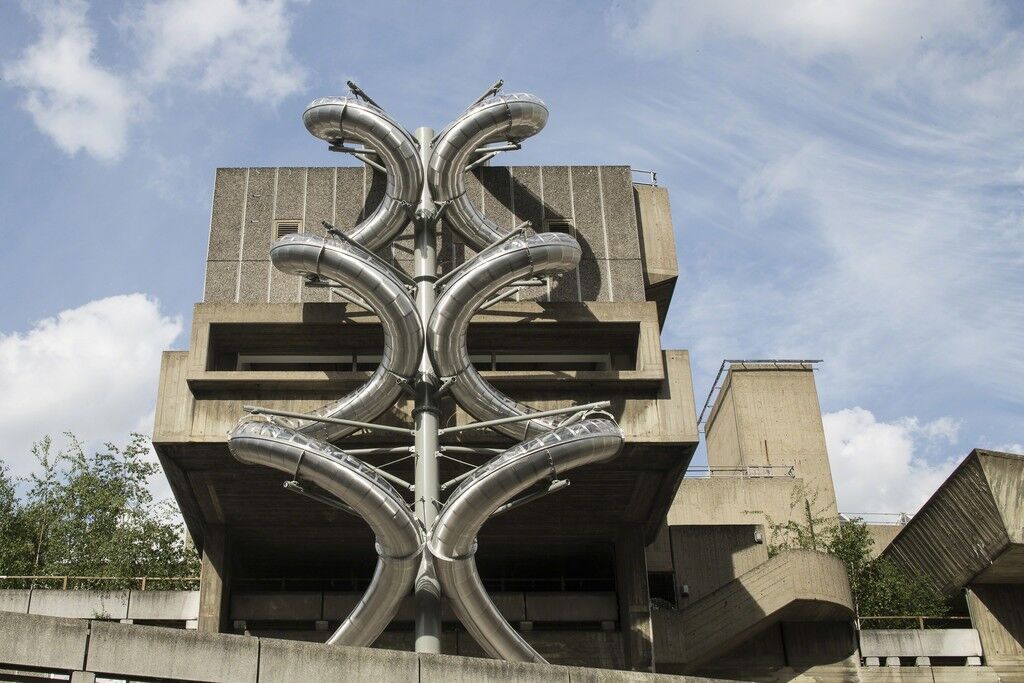 Carsten Höller
Isomeric Slides, 2015
"Carsten Höller: Decision" at Hayward Gallery at Southbank Centre, London (2015)
With two entrances leading to separate steel corridors and a series of immersive installations,
Höller
’s 2015 solo show at London’s Hayward Gallery was a playful reflection on the everyday task of decision-making. Visitors came face-to-face with giant rotating mushrooms that sprouted from the ceiling, then reclined on roaming robotic beds before exiting the gallery from its rooftop via a pair of outdoor spiral slides.
Demie Kim
Related Stories

Carsten Höller Creates a Playground of Choices at the Hayward 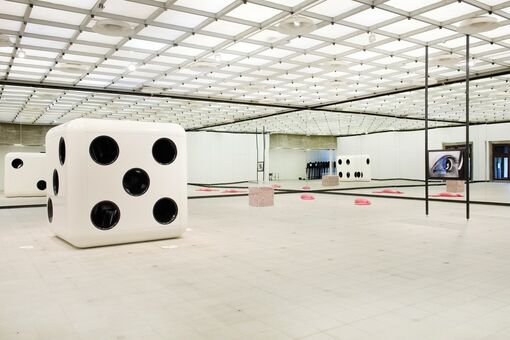 Carsten Höller Creates a Playground of Choices at the Hayward
Francesca Gavin
Jun 15, 2015