Picasso’s Granddaughter, Diana Widmaier-Picasso, Is Evolving the Legacy of the World’s Most Famous Artist 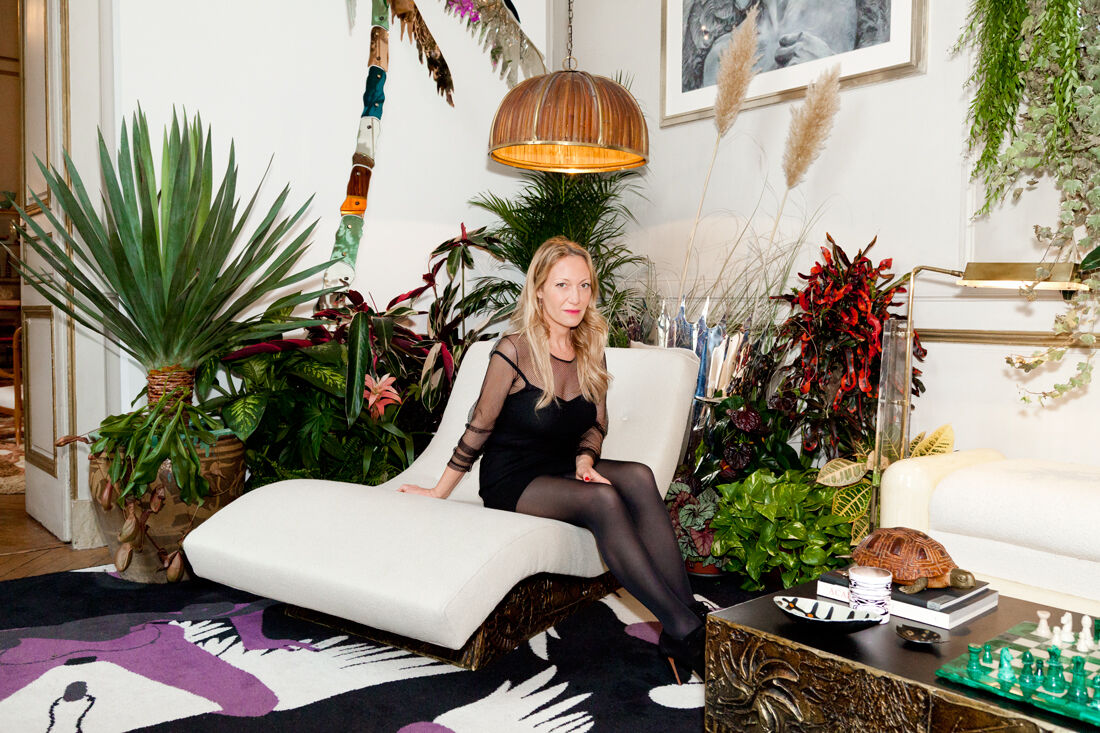 Portrait of Diana Widmaier-Picasso photographed in Paris by Fred Lahache for Artsy.

It’s Paris, the late 1970s. The art market is on the precipice of an unprecedented, decade-long boom during which works by
Pablo Picasso
will claim six of the top 10 spots on the auction block. And Diana Widmaier-Picasso, one of the Spanish painter’s grandchildren, enters grade school, not yet fully aware of the legacy to which she belongs.
“I grew up in a family where my mother told me very wonderful stories about a grandfather who happened to be a great artist and who was happy to have done what he loved,” says Widmaier-Picasso. Now 41, the art historian sits perched on a velvet parlor chair in the gothic Gramercy Park Hotel, steps away from the new home she moved into late this past summer but, due to travel, has only just started to unpack—art books first. Widmaier-Picasso never met her grandfather; he died around a year before she was born. And, as she was told as a child, Picasso the artist “was not a genius,” but rather “an exceptional hard-worker who was free to do whatever he wanted.”
It wasn’t until her days in the schoolyard that Widmaier-Picasso discovered public perception of her grandfather was a bit more grandiose. “My friends would tell me, ‘You know, your grandfather is Picasso, the greatest artist in the whole world’,” she says, always pronouncing her grandfather’s surname with a distinctly American twang. A sense of “astonishment” at the strength of the art market and Pablo Picasso’s top billing on it—in the discussions she imagines must have been taking place between her friends’ parents—played no insignificant role in the awakening offered by her classmates. But recoil she did not. 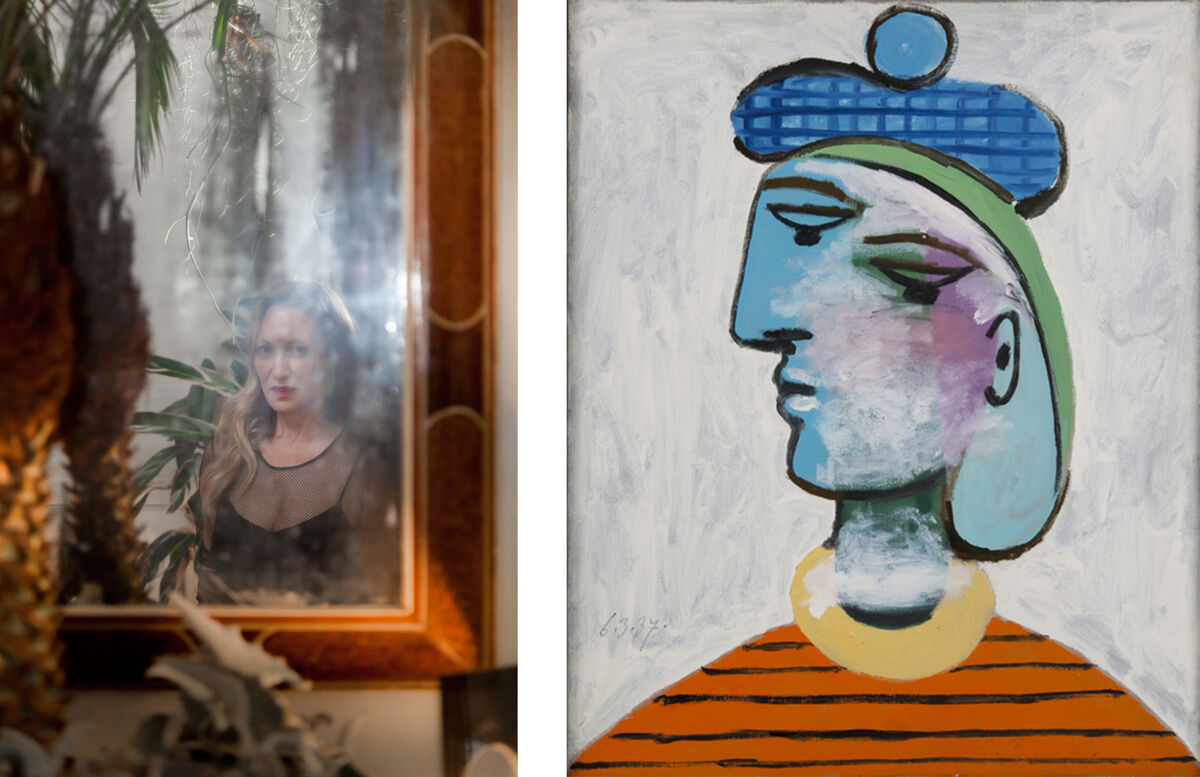 As with her fellow heirs, Widmaier-Picasso has far from shaken off the Picasso mantle. She published her first book on the master, Art Can Only Be Erotic, in 2005. Two years earlier, she had founded DWP Editions, which among other things, is dedicated to the creation of a multi-volume catalogue raisonné of Picasso’s sculptures. She estimates 2,000 works will be included in its first edition, due out in the next two years. According to Widmaier-Picasso, a digital advocate, an online version may soon follow, in what would be a break from the norm but would, importantly, allow the story of Picasso and his sculptures to continue to evolve. (Thinking of her own boxes, no doubt, she quips, “Who wants to travel with five volumes?”)
Her interest in promoting the evolution of the art-historical community and the wider public’s understanding of her grandfather’s oeuvre doesn’t confine itself to books. She has used that research to help MoMA secure a number of key loans for its current survey of the artist’s three-dimensional output. “I come along in many footnotes,” she says with a slight grin. “But, you know, footnotes are often more important.” 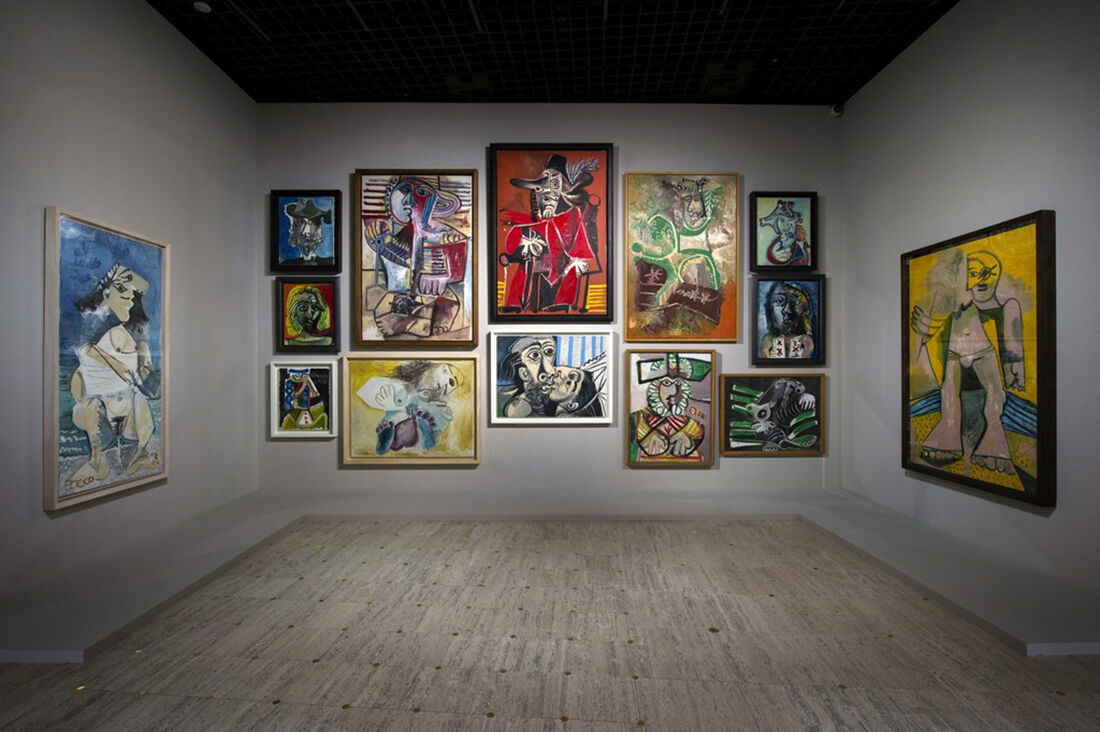 Advertisement
With John Richardson, Widmaier-Picasso curated Gagosian’s 2011 show “Picasso and Marie-Thérèse: L’Amour Fou,” which focused on the artist’s works inspired by Marie-Thérèse Walter, his mistress (the two met when she was 17) and Widmaier-Picasso’s grandmother. Walter died not long after the artist, when Widmaier-Picasso was just four. “It was a way to get to know her,” she says. For the art world, the lauded show marked not only a major survey of an understudied period in Picasso’s prolific career but also a touchstone for the development of the museum-style exhibitions that have become the calling card of blue-chip galleries the world over.
To have an artist’s heir curate a show at a major gallery is perhaps not such an anomaly in the U.S. But Widmaier-Picasso’s latest effort, “Picasso.mania,” which she curated at the Grand Palais in Paris in collaboration with the Centre Pompidou’s Didier Ottinger and the Musée national Picasso-Paris’s Emilie Bouvard, is an altogether different story. It’s “particularly difficult in France” for a person of her lineage to be taken seriously on a stage the scale of the Grand Palais. “You have to work a little harder,” says Widmaier-Picasso. She did. 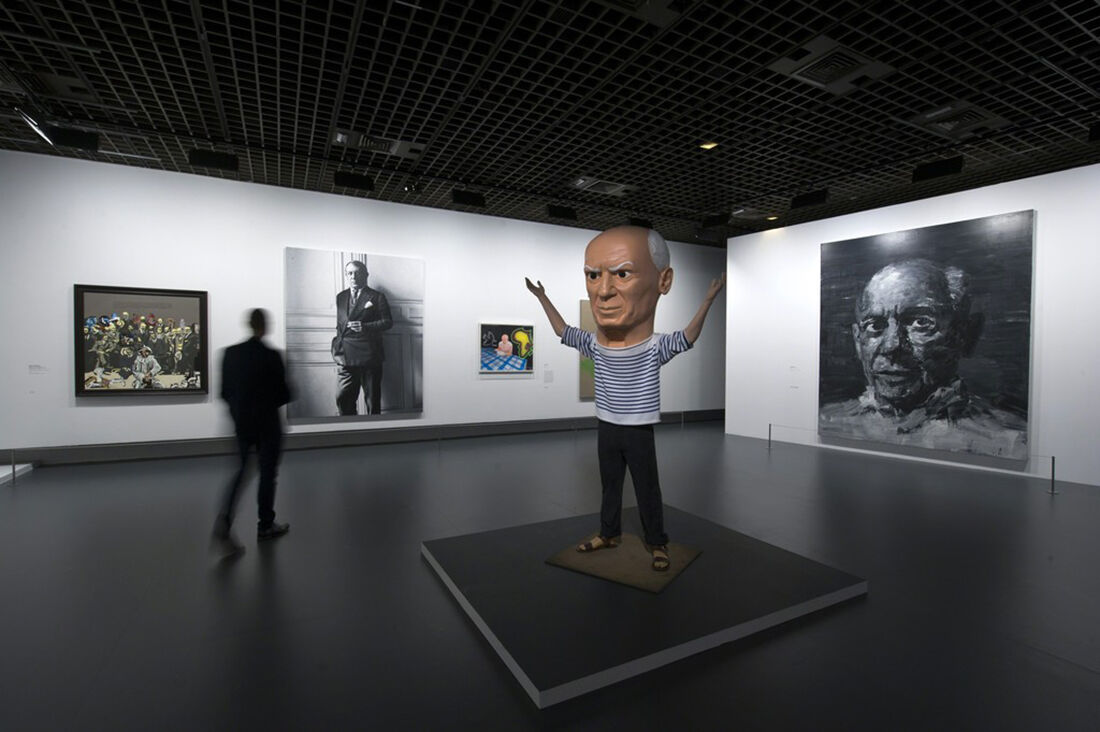 As a child, her first loves were dance and the theater. But she soon found herself consumed by a passion for the many curiosities that presented themselves in the preview galleries and back rooms of auction houses. She indulged in frequent trips to Drouot during her formative years to satiate this fascination. “I loved the people, the objects,” she recalls with a nostalgic sigh. “There were all kinds of strange things going on in that auction house, and I was very inspired.” She set her sights on becoming an auctioneer, which requires studies in both law and art history in France. “So that’s what I did,” she says matter of factly.
At university, Widmaier-Picasso studied the
Renaissance
and the 17th century. “I had to establish my own world,” she says of the distance she placed between her academics and her surname. She began copying Old Master drawings and paintings but wrote her thesis on the art market boom during the Grand Siècle. “The art market,” she notes, “is not a new phenomenon,” when asked about the phenomenal prices achieved for her grandfather’s work, the world’s most expensive artist. “In the 17th century, a painting by
Nicolas Poussin
was the price of a townhouse.” Picasso’s record at auction, and the greatest price ever paid for an artwork on the open market, $179 million, will certainly buy you one uptown today. 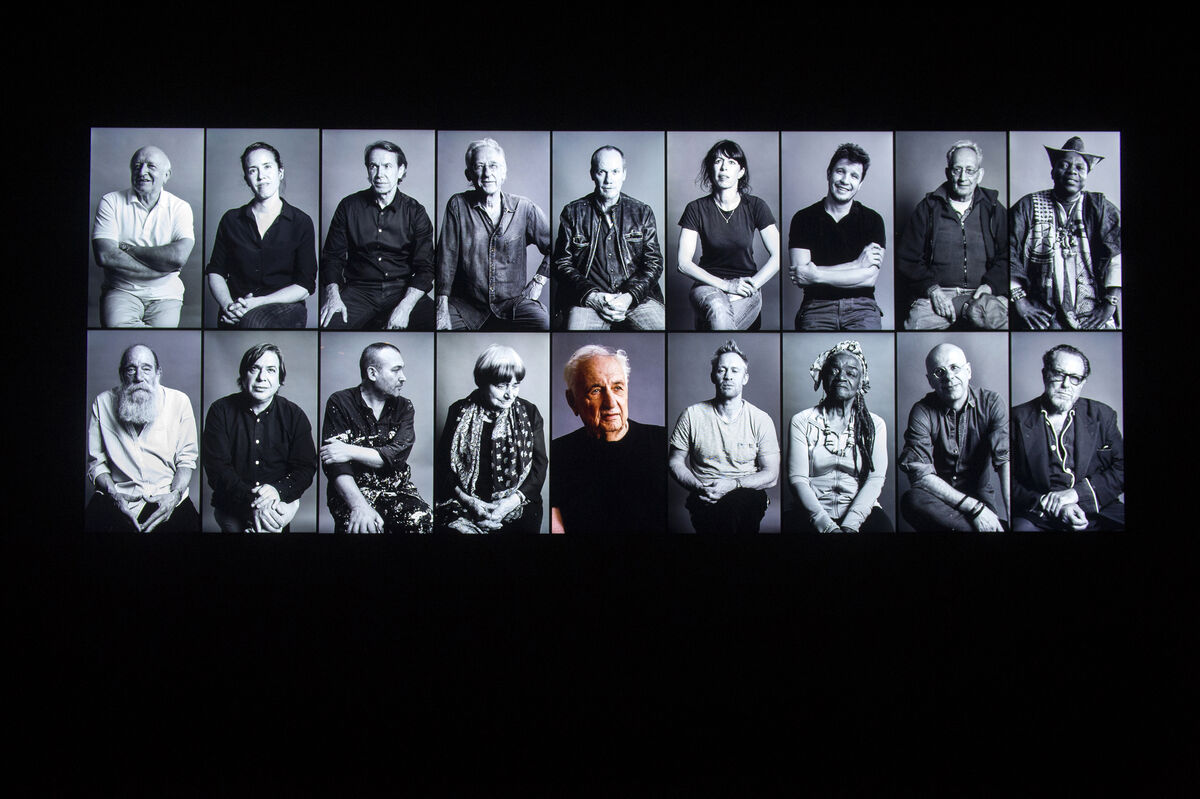 “Picasso.mania” reads, perhaps unintentionally, like a series of supporting paragraphs to that sale price. The show, which takes place in the same hall that housed a major retrospective of the artist’s work in 1966, traces how just about every major artist since—
Warhol
,
Johns
,
Kippenberger
,
Hockney
,
Polke
,
Prince
,
Koons
,
Cattelan
,
Basquiat
, and
Weiner
among them—has found inspiration in Picasso. “He was a liberating force,” explains the curator. “He pushes these artists to do whatever they want to do, things they believe in,” while shrugging of critique, like her grandfather. (From Clement Greenberg to Douglas Cooper and Andre Malraux, Picasso’s late work in particular was, one might forget, not always so well received.) “It’s about showing the artists their freedom,” Widmaier-Picasso adds.
Aside from and because of those blockbuster names, the show is notable for its inclusion of lesser known—at least to a mass audience—artists like
Adel Abdessemed
and
Rineke Dijkstra
. The Dutch photographer’s video work I See a Woman Crying (Weeping Woman) (2009–10) places a flock of school children in front of an image of Picasso’s Weeping Woman (1937). “Anyone, even a child, can get the emotion,” says Widmaier-Picasso of the piece, a favorite from the show. “And that’s what is fascinating, that’s what makes him so popular.” 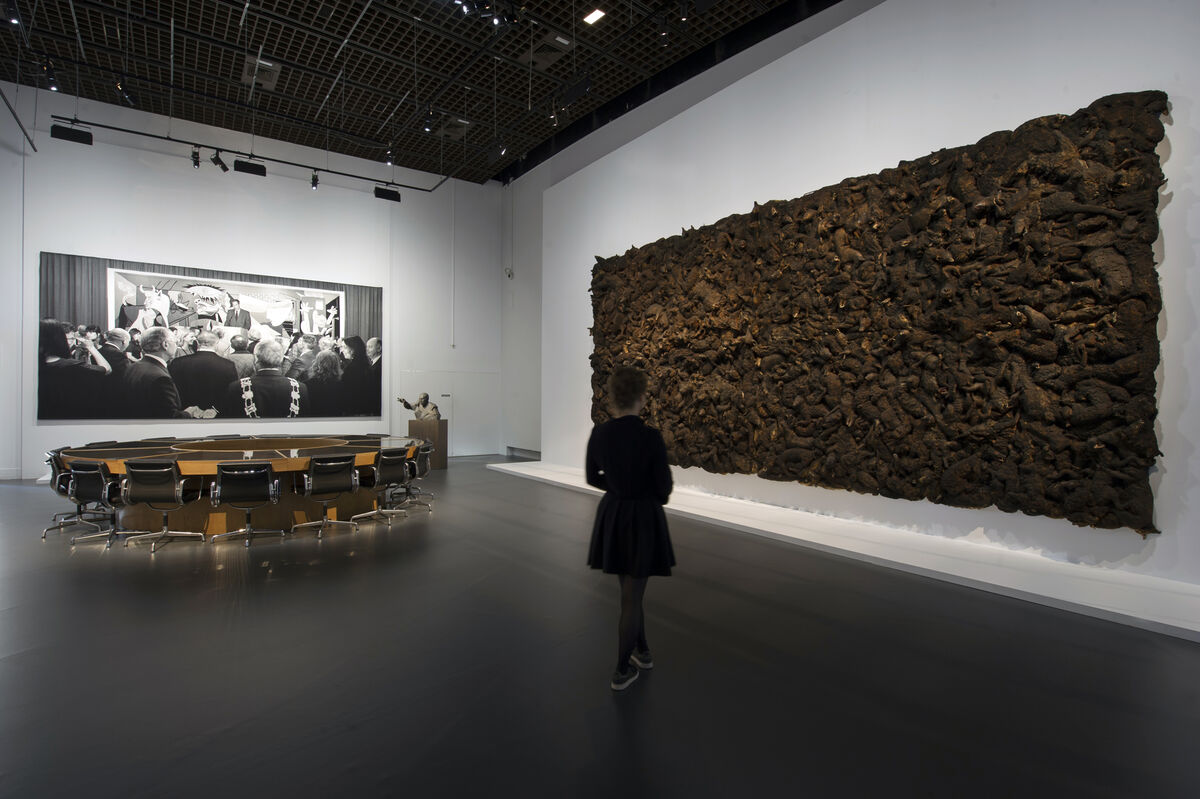 It’s Picasso’s Guernica (1937), the inspiration for Abdessemed’s piece, that resonates most harrowingly at the time we sit under the Gramercy Park Hotel’s sawtoothed chandeliers. It’s been just five days since the terrorist attacks in Paris that left 130 dead. And the tragedy in her home town weighs heavily on Widmaier-Picasso. The attacks, which also closed the Grand Palais for several days, lead her to recall one of her grandfather’s most heroic moments in popular memory during the Nazi occupation of Paris: “The ambassador of the Nazis visited Picasso and Guernica was at MoMA at the time, but he had a reproduction in his studio. The Nazi ambassador says to him, ‘Did you do this?’ And Picasso looked back and said, ‘No, you did it.’”
His art, she suggests, made Picasso untouchable despite such boldness in the face of tyranny. And now, she hopes it can embolden those left in ISIS’s horrific wake. “When something like this happens, you feel disarmed, as if you’re [emotionally] naked,” she says. “You have to consider the very first values that humankind can have: solidarity, fraternity. It makes you go back to something very basic and crucial, and art can provide that.” The studio where Picasso created Guernica, denouncing tragedy the world over, has now been converted into a foundation by Widmaier-Picasso’s mother, Maya Widmaier-Picasso. “It’s such a symbolic place,” says Widmaier-Picasso of the studio at 7 Rue des Grands-Augustins. And perhaps it’s just the kind of symbol the French capital needs right now.
Alexander Forbes is Artsy’s Consumer Marketplace Strategist. He was previously the Executive Editor of Artsy Editorial.
Related Stories