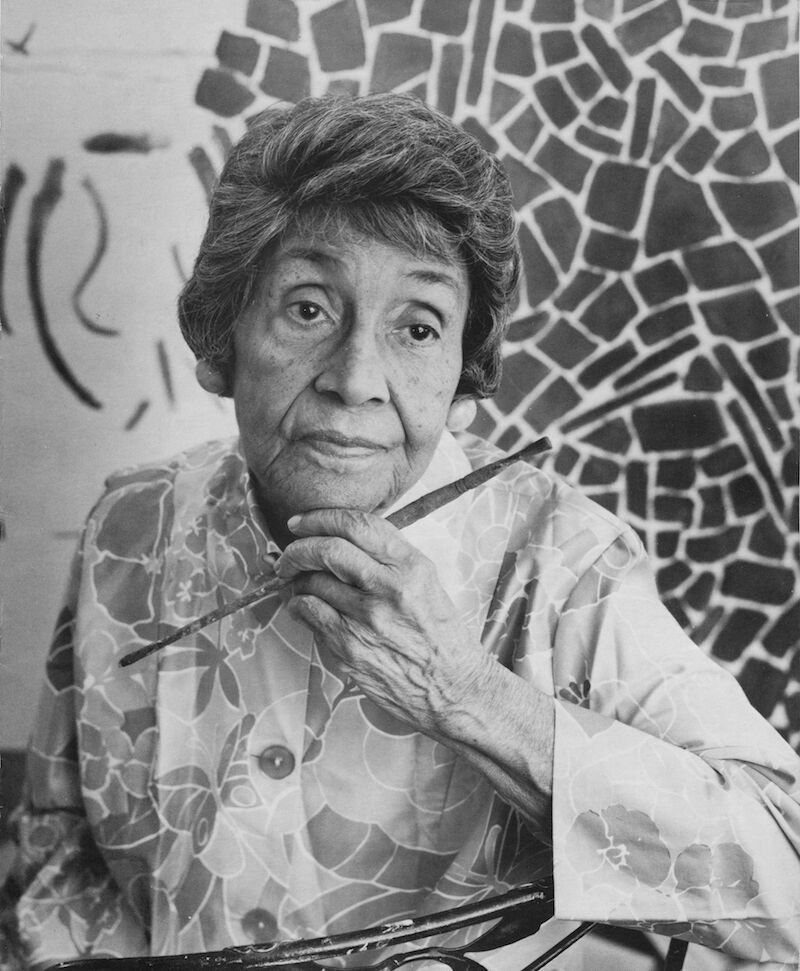 “Through color, I have sought to concentrate on beauty and happiness, rather than on man’s inhumanity to man.”

In 1972, at age 80,
Alma Thomas
was the first African-American woman to receive a solo exhibition at the Whitney Museum. Interviewed that same year by The New York Times, the artist, who grew up in Columbus, Georgia, before settling in Washington, D.C., said: “One of the things we couldn’t do was go into museums, let alone think of hanging our pictures there. My, times have changed. Just look at me now.”
Thomas, who achieved widespread recognition late in her lifetime for her colorful, exuberant abstract paintings, is once again in the spotlight after slipping from the mainstream art-historical canon following her death in 1978. Last year, the White House hung a newly acquired Thomas painting in the Obamas’ dining room, while the Whitney pulled another canvas by the artist from storage, juxtaposing it prominently with a
Cy Twombly
painting in the inaugural exhibition of its new building. “Thomas is a legend and a discovery at the same time,” says Ian Berry, director of Skidmore College’s Tang Teaching Museum in Saratoga Springs, New York, where a major retrospective of the artist’s work opens on February 6th. Berry has organized the show with Lauren Haynes, associate curator at the Studio Museum in Harlem, where the retrospective will travel in July.
The first graduate of Howard University’s fledgling art department in 1924, Thomas taught art for 35 years in a segregated junior high school in Washington, D.C., while always making her own work. In the 1950s, taking night and weekend classes at American University, Thomas shifted from representational painting to abstraction. After retiring as a school teacher in 1960, she committed herself full-time to her art. Thomas forged a highly personal style of brilliantly hued short brushstrokes aligned in dazzling vertical stripes and radiating circular compositions inspired by natural phenomena like the patterns of light in her garden and images from the Apollo moon missions. “Through color, I have sought to concentrate on beauty and happiness, rather than on man’s inhumanity to man,” the artist said in 1970. Michael Rosenfeld, the primary dealer of her work for the past 25 years, says it took courage for black artists during the civil rights era to buck the expectation to make work representing African-American life and struggles. “Her decision to be an abstractionist was in itself a major social-political statement—that a woman of color can be part of the larger picture of American painting,” says Rosenfeld, whose Chelsea gallery had a solo exhibition of Thomas’s work last spring. Along with loaning several canvases to this new retrospective at the Tang, he has shepherded her works into the collections of numerous institutions, including the Philadelphia Museum of Art and the Crystal Bridges Museum of American Art in Arkansas, as well as the White House.
When it opens next month, the Skidmore show will begin with a salon-style hanging of some 30 small studies and sketchbook pages working out color and form, about half of which have never been exhibited. The curators are borrowing these works (dating from 1960 on) from the Columbus Museum in Georgia, where Thomas, who never married and had no heirs, left her archival materials. (The artist also left many paintings to what is now called the Smithsonian American Art Museum.) “This first room sets up her pathway to abstraction and gives a view into her process,” says Berry, who will also include the large canvas March on Washington (1964), along with two studies for it. The only semi-representational painting in the retrospective, it shows her intimate involvement with the civil rights movement. “The signs and the faces become abstract shapes in that painting,” says Berry. 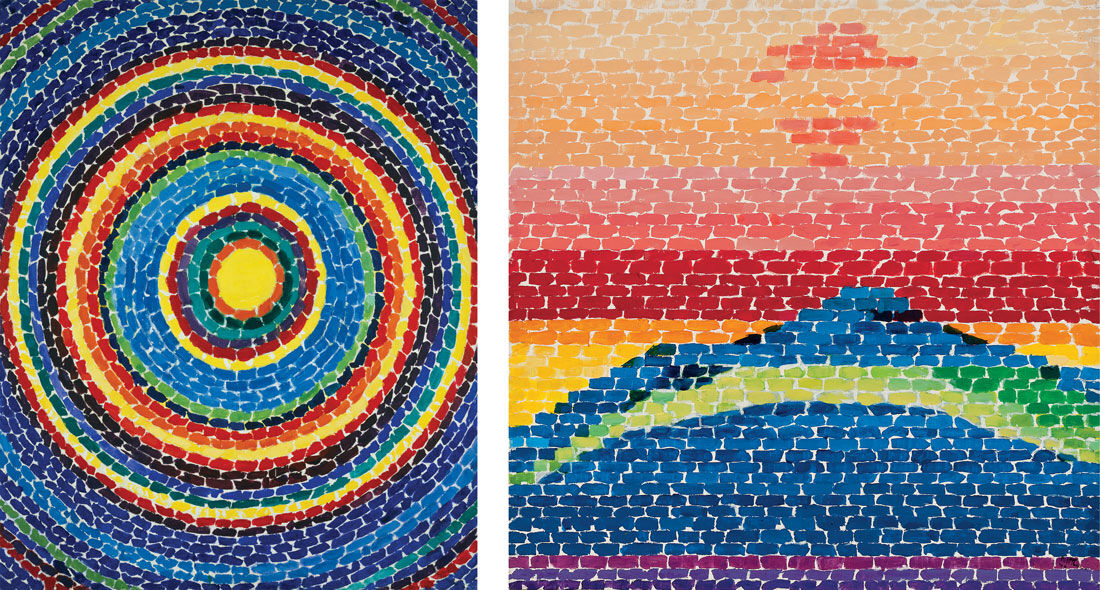 “One of the things we couldn’t do was go into museums, let alone think of hanging our pictures there. My, times have changed. Just look at me now.”

The exhibition will also underscore Thomas’s engagement with flowers and nature distilled in large-scale canvases, such as Breeze Rustling Through Fall Flowers (1968). These works, highlighting Thomas’s signature style, bristle with broken stripes of almost every color in the spectrum, with different hues peeking through the top layer of color. Another room will focus on paintings influenced by imagery from early space flights, including Snoopy Sees Earth Wrapped in Sunset (1970) from the Smithsonian American Art Museum. The orange orb brimming with rows of staccato brushstrokes, balanced perfectly inside an atmospheric square field of paler orange, is both minimal in geometry and maximal in optical effects.
The final gallery will show paintings from the mid-1970s, when Thomas’s brush marks start to deviate from their ordered lines to form rhythmic webs and mosaic patterns. “She’s in her 80s and making her most confident nature-inspired images,” says Berry. In the final painting included, Hydrangeas Spring Song (1976), Thomas’s deep blue marks fall free-form like wedges and commas through white space, breaking apart as they tumble.
For the curators, who are pulling together many works never or rarely exhibited, “it’s the kind of show where you feel like you’re really adding something to the telling of art history,” says Berry. While the Smithsonian put on a major Thomas exhibition in 1981, three years after her death, this is the first museum retrospective since a 1998 show organized by the Fort Wayne Museum of Art in Indiana. “As museums start pulling their Alma Thomas works out and showing them more, people almost unanimously are moved by them,” says Berry. “All these paintings that we’re borrowing from great museums, maybe when they get them back they’ll put them up rather than back in storage. That’s definitely a hope and a goal.”