Over 100 Years Later, Photographer Alice Austen Is Finally Being Recognized as an LGBTQ Icon By all accounts, photographer Alice Austen was an extraordinary woman. Born into an affluent family on Staten Island in 1866, she challenged oppressive Victorian conventions by embracing individuality and independence.
Austen roamed around turn-of-the-century New York with camera in hand, capturing street vendors and immigrants. She worked from moving trains and sporting events, creating early action shots, and obsessively recorded the activities of friends and family, as well as her own life. Unafraid to climb a fence post (and risk exposing her ankles) to get the perfect shot, Austen produced roughly 8,000 photographs in her lifetime. In doing so, she helped to pioneer documentary photography.
But there’s an underrepresented part of her story: Austen’s 53-year-long relationship with a woman named Gertrude Tate. “There’s a history of not talking about Gertrude,” says Janice Monger, executive director of the Alice Austen House, the photographer’s Staten Island cottage-turned-institution. Even this place, dedicated to exploring Austen’s life and work since 1985, has promoted varying narratives of its former resident. The reasons why are as complex as the photographer herself.
Austen and her mother moved into the cottage, called Clear Comfort, after her father abandoned them around 1869. Austen’s uncle, a Danish sea captain, let her play around with a camera at age 10; another uncle, a chemistry professor, showed her how to develop the glass plates she exposed. An upstairs closet was converted into a darkroom for Austen, who took painstaking notes about the photo-making process. She was an experienced, exacting photographer by her 18th birthday, and spent the next 50 years perfecting her craft. 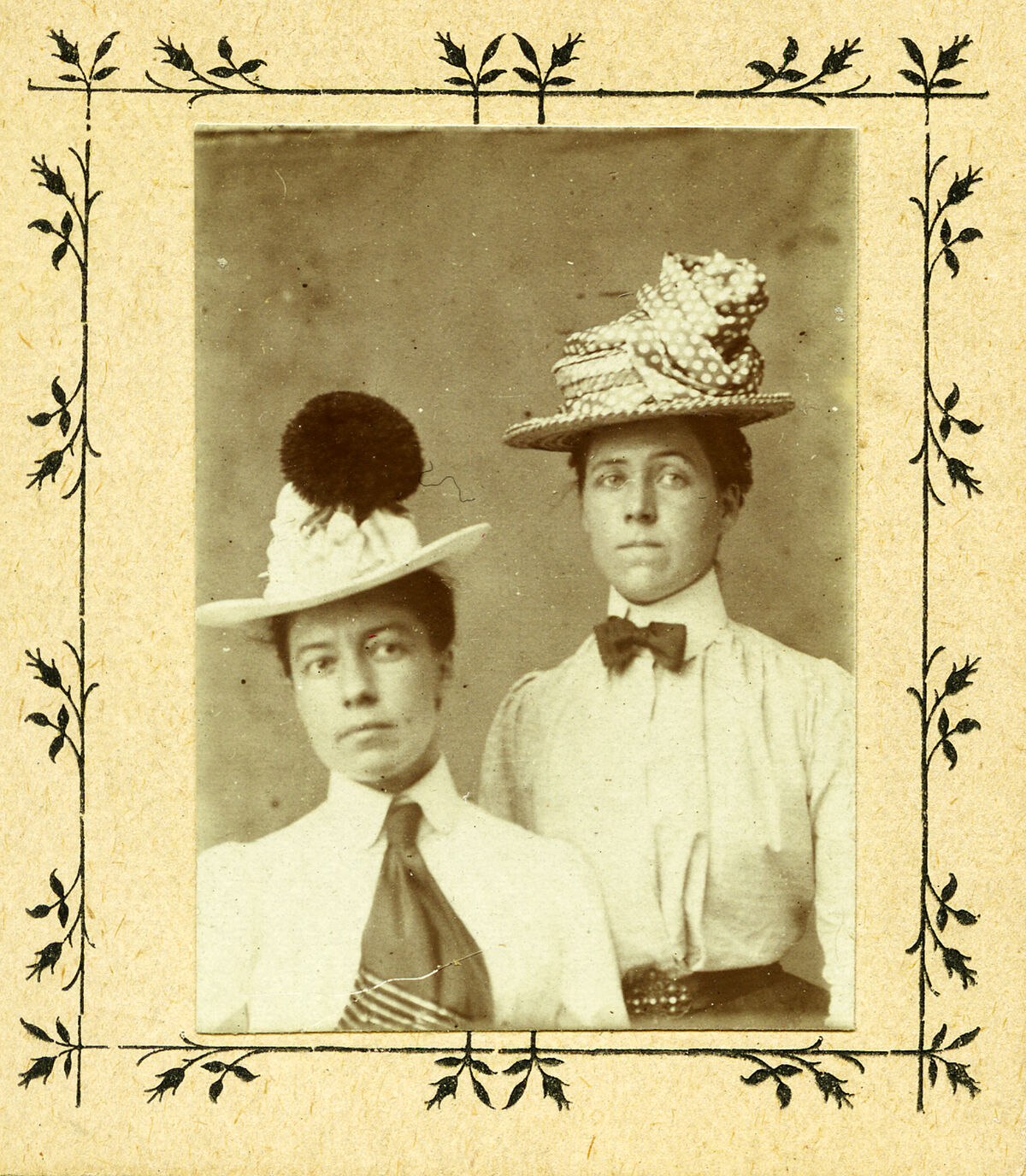 Clear Comfort served as Austen’s earliest muse: She photographed her home and the family events it played backdrop to. She shot visits to the beach, picnics in the mountains, and bowling parties at a friend’s mansion. An avid athlete, Austen documented the newly introduced sports of tennis and cycling—even collaborating with a friend on a book depicting the correct positions in which to turn, coast, and dismount a bike. In the 1890s, Austen and her photo equipment travelled around the East Coast and to Europe, where she spent entire summers exploring.
While traveling encouraged Austen’s boundless curiosity, at home, history was taking place in her backyard. She watched the building of the Statue of Liberty and Ellis Island’s new federal station. Before entering New York’s harbor, each incoming ship was inspected at a quarantine station south of the Austen cottage. The U.S. Public Health Service asked Austen to photograph the facility—an exercise that fascinated her so much, she returned every year for a decade, fervently documenting people and equipment.
Austen’s knack for photojournalism was perhaps most apparent when she ventured into New York City, making pictures of “street types”—street sweepers, bootblacks, fishmongers, organ grinders—that she had copyrighted at the Library of Congress. The nature of this work, and the fact that she never married or bore children, was hardly typical of a Victorian woman. But because she wasn’t paid for her photographs, Austen considered herself an amateur. Advertisement
“Alice had the means to pursue this craft,” Monger explains. “It wasn’t a profession, but she took it seriously and was very technically proficient—it was beyond a hobby.”
During a trip to the Catskills in 1899, Austen met Gertrude Tate, a kindergarten teacher who was recovering from typhoid at a hotel. A small photo album made by Austen documents the relationship that blossomed that summer. Tate, who lived in Brooklyn, began visiting Clear Comfort, accompanied Austen on holidays abroad, and in 1917, moved into the cottage. While Tate’s family objected to her “wrong devotion” to Austen, she lived there for three decades.
Personal photographs of Tate, Austen, and their female friends reveal further insight into Austen’s layered, playful personality. One iconic image, Trude & I (1891), features Austen and her childhood friend, Gertrude Eccleston, an Episcopalian minister’s daughter, wearing masks, corsets, and calf-length skirts, their arms intertwined. Both are smoking—an act women could be arrested for.
In The Darned Club (1891), taken in Clear Comfort’s garden, Austen and three female friends are framed as two embracing couples. Another photo, Julia Martin, Julia Bredt and Self Dressed Up as Men (1891), features exactly that—she and her friends dressed up as men—complete with phony mustaches and cigarettes. Another picture from this series depicts one of the women with a closed umbrella between her legs, suggesting a phallus.
“Alice probably felt she had the freedom to take those photos, because they weren’t necessarily for distribution,” Monger says. “She mocked Victorian society and the restrictions it put on women. At the same time, she was thinking about gender roles and exploring her identity.” 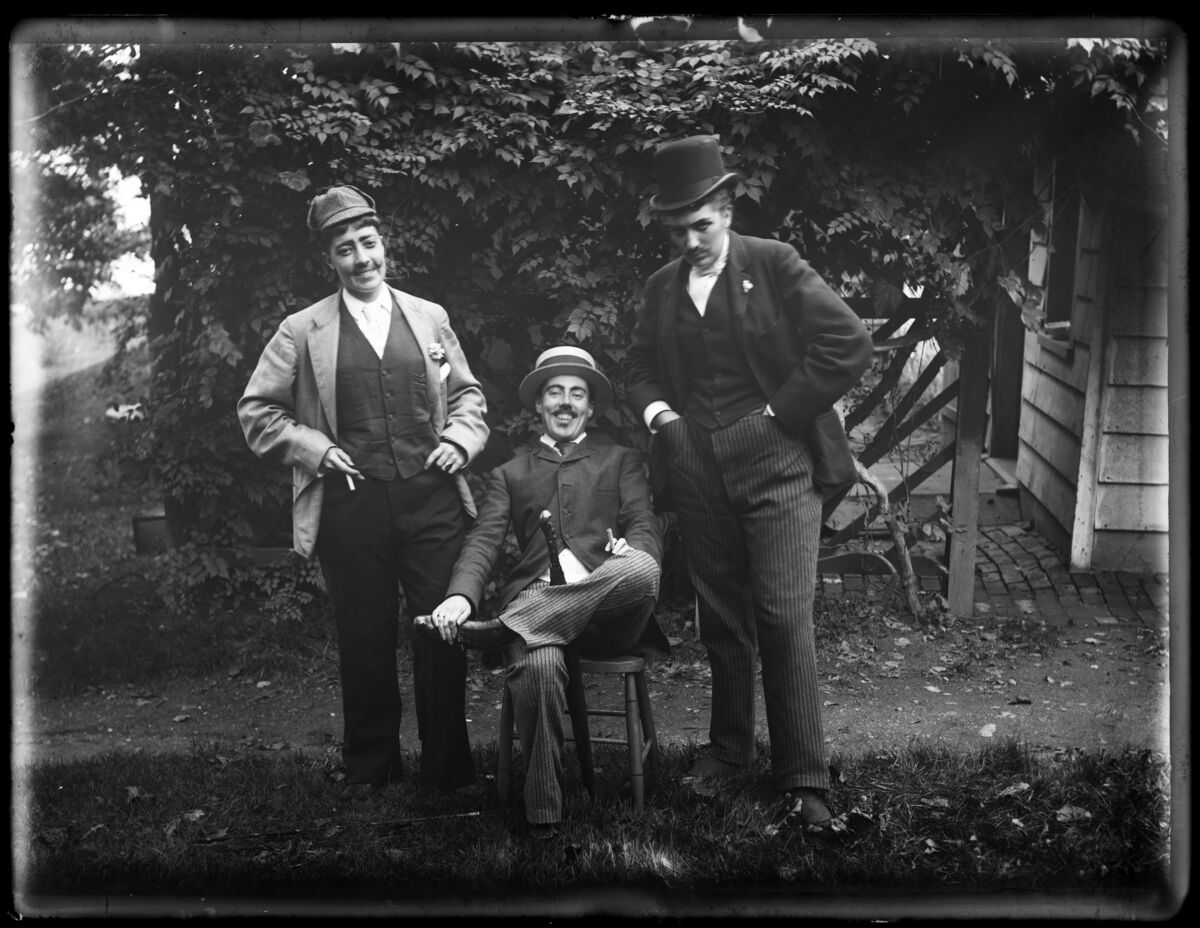 Such photographs are often omitted in accounts of Austen’s legacy. Many articles I read didn’t even mention Tate, preferring to focus on Austen’s images of street types and Victorian society. The word “lesbian” barely appears on the Alice Austen House website, despite criticism it has received for not acknowledging the relationship to a fuller extent.
Monger, who assumed her role in 2013, has spent the past four years tackling the issue. But it’s difficult to put modern labels on historical relationships, she told me. “Even in the museum world, there’s differing opinions on this. I’m not afraid to call her a lesbian. But using that term would be over-simplifying things.”
Lillian Faderman, an internationally known scholar of lesbian and LGBTQ history, is part of an advisory team the Alice Austen House assembled to help bring Austen’s relationship with Tate to the fore. The word “lesbian,” Faderman told me, carries a connotation that Austen’s social class wouldn’t have identified with.
“Another term around at the time was ‘sexual invert,’ which probably would have horrified them as much as ‘lesbian,’” Faderman says. “It was coined by a sexologist, and suggested pathology.” Other available terms, like “romantic friendship” or a “Boston marriage,” inspired by Henry James’s 1886 novel, The Bostonians, may have been more attractive to Austen. “Everyone wants ‘evidence,’” Monger says. “We don’t have anything explicitly written that says they were lesbians.”
Looking at Austen’s photographs and other documents, Faderman and others contend, there’s no question about it. “It’s hard to imagine the kind of willful ignorance about homosexuality that existed in earlier eras,” Faderman says. “I would think that if Alice’s family didn’t know, they’d tell themselves they wouldn’t want to ‘think ill’ of Alice and Gertrude. It’d be tarring them with this terrible allegation.”
Similarly, one of Austen’s biographers, Ann Novotny, offered two different versions of her life. Tate is referred to as Austen’s companion in Novotny’s 1976 biography, but as her lover in an article she wrote for Heresies, a feminist art magazine, the following year.
Since Monger’s arrival, she’s worked with the Alice Austen House’s board to incorporate Austen’s personal identity into the cottage museum. They’ve since updated its mission statement and received multiple grants to further contextualize Austen from a number of perspectives, including LGBTQ history. In 2019, the house will unveil a new permanent display, complete with new text panels in current language and photographs that make Tate more visible.
And on June 20th, the Alice Austen House was officially designated a national site of LGBTQ history by the National Park Service. It is the fourth site in New York City, and the first in the city and state devoted to a woman, to receive the honor.
During Monger’s remarks at the ceremony, she described Austen and Tate’s relationship as a story of love and acceptance, and emphasized the responsibility of representing a historical person. “What an incredible day,” she mused. “This moment is a long time coming.”
Tiffany Jow
Related Stories