What Political Artists and Protesting Athletes Have in Common 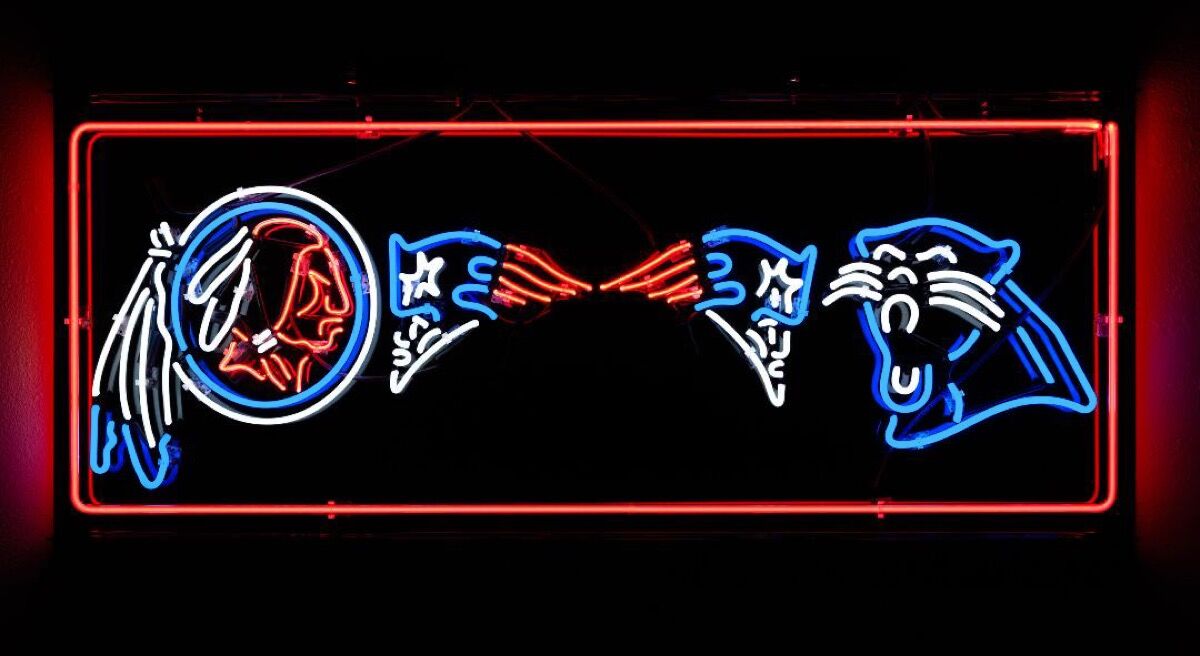 The flag—with its lurid tie-dye pattern, hanging from a pole at Galerie Lelong in New York—is only half the artwork; it tells only part of the story. Of equal importance is the shadow cast on the wall behind, forming a grayscale Stars and Stripes. The American flag, drained of color.
The piece,
Glenn Kaino
’s Spontaneous Combustion (03:11:06) (2017), is included in “Sidelined,” a captivating group show curated by artist
Samuel Levi Jones
. Jones was inspired by the NFL players, Colin Kaepernick in particular, who have knelt during the national anthem to protest the rash of killings by police officers around the country of unarmed people of color. Although not all the works here refer directly to the NFL protests, all but one were made in 2017, and each in some way addresses the relationship of minorities to various power structures in the United States. Most do so by considering sports. The show was conveniently timed to overlap with the Superbowl this upcoming Sunday, and it happens also to coincide with an exhibition, to which it relates, at the Whitney Museum of American Art (“An Incomplete History of Protest”) which thoughtfully presents selections from the museum’s collection of rebellious art and related matter.
The conjunction of sports and art seems appropriate in a number of ways. For one, athletes and artists suffer similar criticisms when they engage in protest. By speaking out, each is seen as failing to entertain. The football players taking a knee were criticized for protesting on the job. They are being paid a lot of money to be on that field, the argument goes, so they ought to act as the league—meaning the owners, their employers—want them to. (Another beef, that the kneeling protesters somehow disrespect the very flag that symbolizes their freedom of protest, seems too muddleheaded to take seriously.) 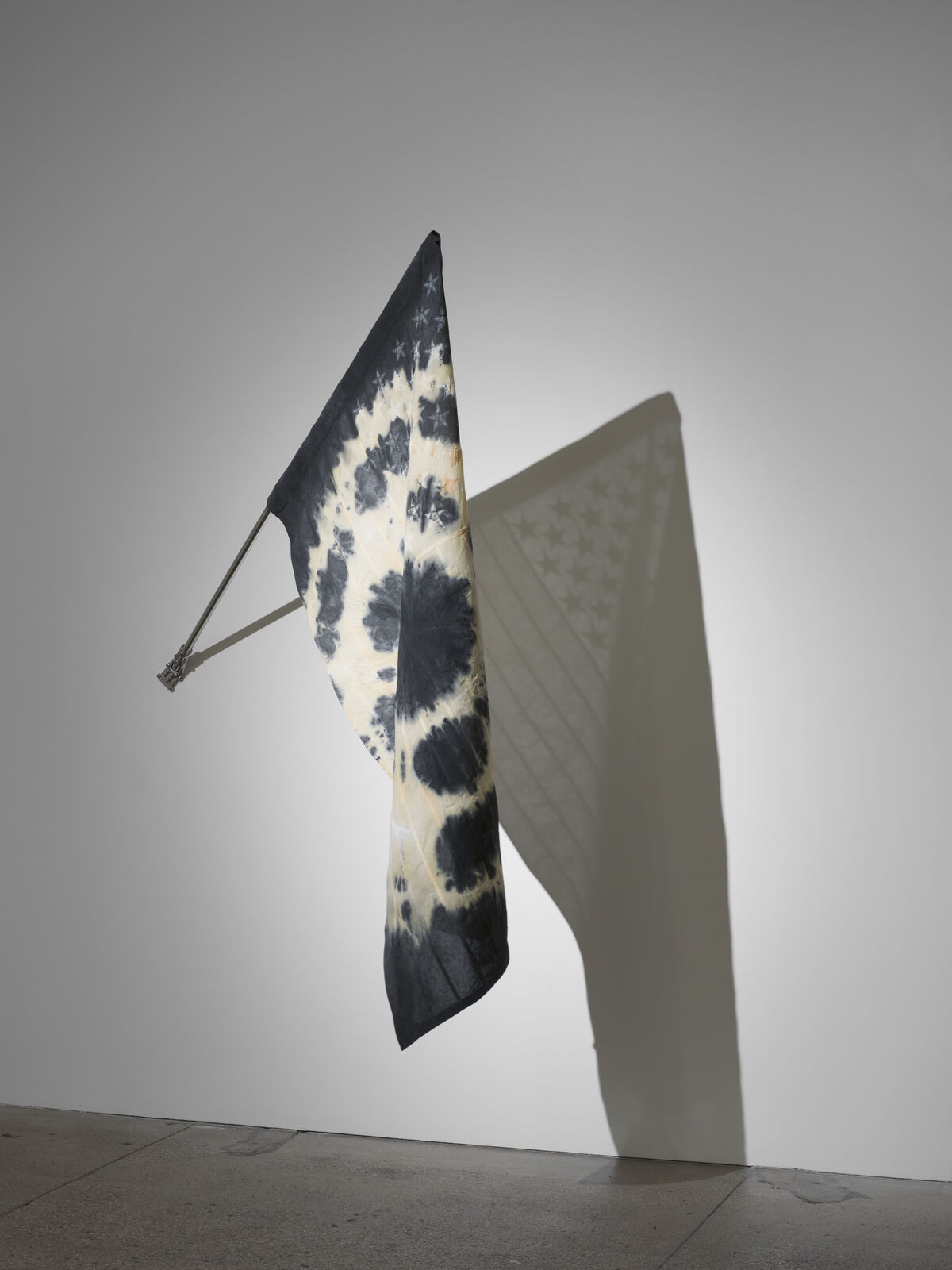 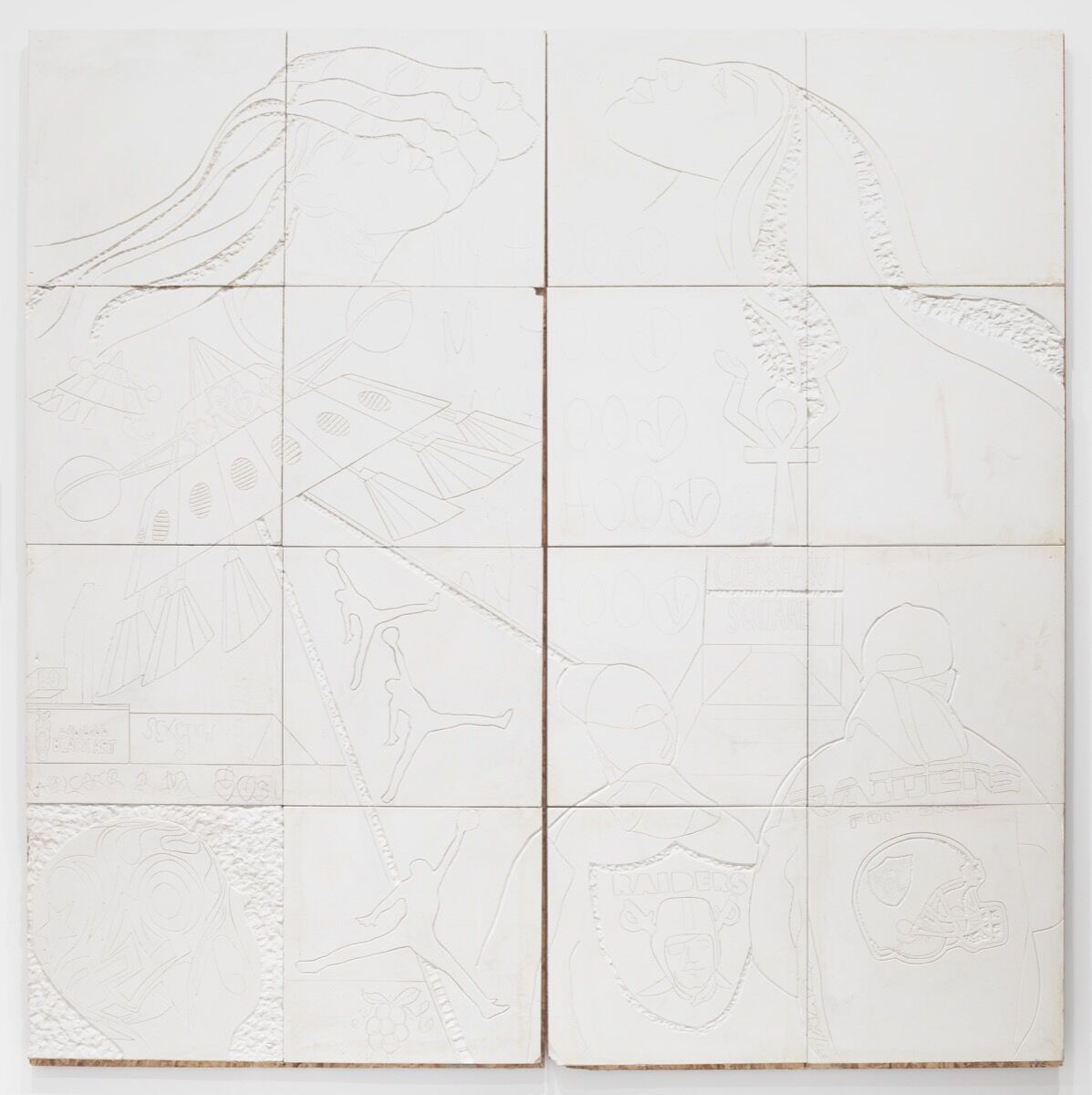 Similarly, art that is explicitly political is often deemed unaesthetic; and, the argument continues, institutions that take public funds should not display or foster such dissenting speech. In both cases, the criticisms amount to a parent slapping a child for backtalk, to which we might add that the implications of infantilizing the citizenry have sinister implications for democracy.
By what right, pundits ask, do these athletes inject politics into an innocent pastime? One could reply that playing the anthem at the start of games is itself a needless imposition of ideology into sport. One could also point out, as
Patrick Martinez
’s neon wall sculpture “Multicultural vs. Western” (CTE) (2017), seems to do, that sporting events, football in particular, always have political undertones. The piece, also in “Sidelined,” pits the team logos of the Washington Redskins and the Carolina Panthers against the logo of the New England Patriots. Who wins—who has more claim to “patriotism” or national bragging rights—the caricatured Native American “redskin” or the nativist patriot?
As for the black Carolina panther, Martinez’s inclusion of it points to the strangeness of the logo: No black panthers (or black cougars, jaguars, or mountain lions) have ever been found in North America, except as the moniker of an oft-maligned black-rights political group. In any case, the panthers in North Carolina were declared extinct in 2011, and the team’s owner, Jerry Richardson is reportedly selling the team after allegations of sexual misconduct and using racial slurs. He is sure to profit from the move.
Just as politics has infected our sports entertainment, shows like “Sidelined” tend to be accused of marring the beauty of art. It is true that political art holds its terms in tension—the more obvious its politics, the less potent the art tends to be. None of the work in “Sidelined” achieves the power of such clear, direct statements of protest as those made by NFL players kneeling during the anthem, nor need it aspire to do so. Over at the Whitney, a wall of anti-Vietnam War posters, many eye-catching and effective, announce their politics in bold colors. I admire them and want to march to their beat, but the political art I find most affecting outlasts, or transcends, the issues it addresses. 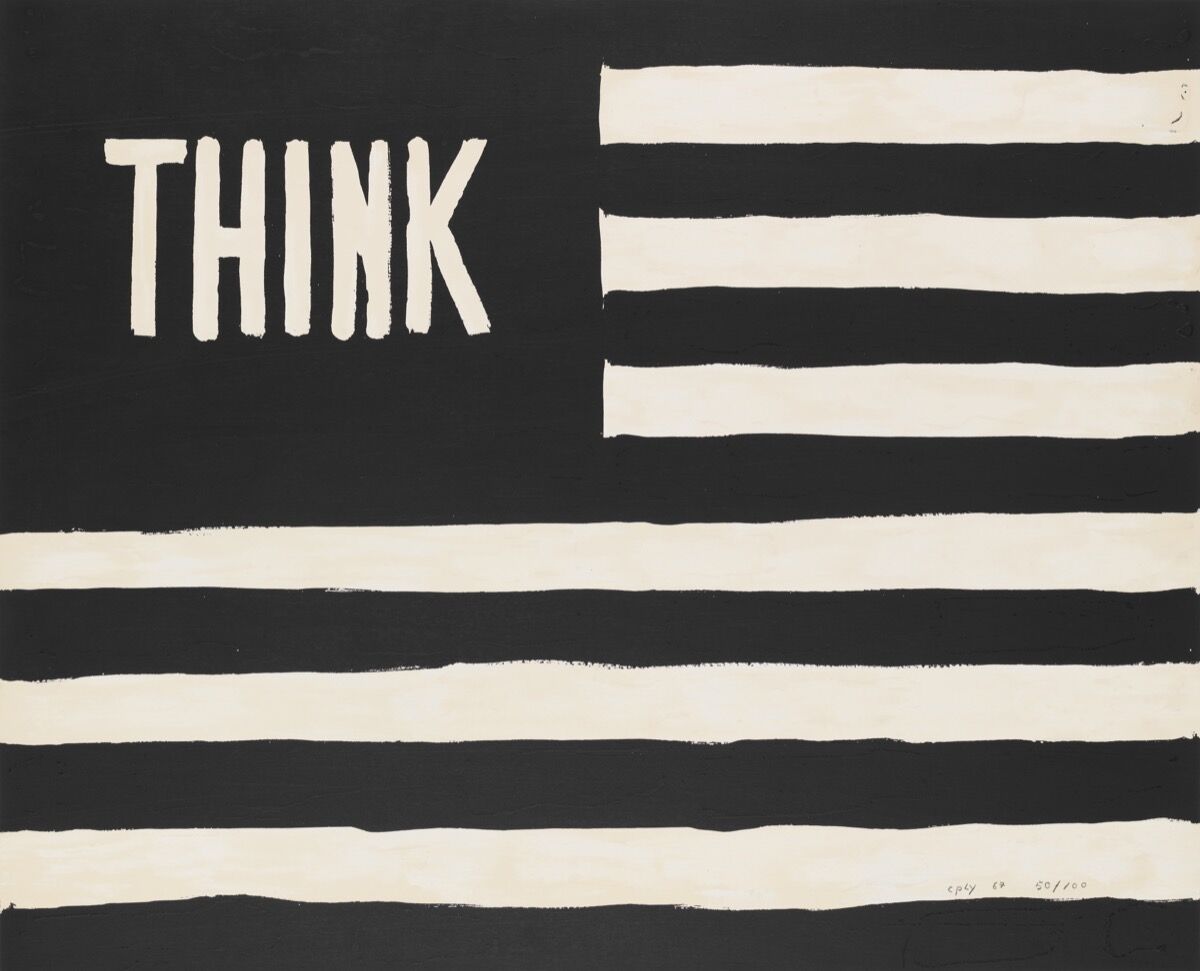 Advertisement
For instance, Kaino’s Spontaneous Combustion at Galerie Lelong recalls Untitled (Think/flag), a screenprint included in the Whitney exhibition. Made by
William N. Copley
in 1967, the work depicts a black-and-white American flag with the word THINK in the field where the stars would normally be seen. As agitprop, it registers as effectively as a good bumper sticker, whereas Kaino’s piece actually causes one to think; by asking questions and feeding empathy, it opens wider perspectives than even the best-designed slogans can. Incidentally, the colors of Spontaneous Combustion are also those of Pittsburgh Steelers football team, reminding us that politics in the U.S. is a sort of team sport, energized more by passion and feelings of identification than by ideology (political platform) or policy. It suggests that unchecked enthusiasms in the citizenry are liable to spontaneously combust.
The Crenshaw District Hieroglyphics Project: Tower 1: 16 of 1880 (2017) by Lauren Halsey, hanging at Lelong, consists of two gypsum panels inscribed with symbols and images recording the history of a black neighborhood in Los Angeles. Among them are a series of stylized dunking basketball players resembling the Nike “Jumpman” logo (dunking has its own racially tinged history in basketball, where traditionalists have long sought to ban it) as well as young males wearing Oakland Raiders jackets. If politics has devolved into a team sport, it is equally true that capital, in the form of consumer frenzy around sports teams, efficiently channels the energies of minority youth away from political action and into team (or gang) tribalism. And, of course, this makes those kids much easier to police.
Capital is, of course, an abstraction: It exists as information or is symbolized by the pieces of paper we carry in our wallets (which are artworks in themselves). Where “Sidelined” and the Whitney exhibition are most fascinating is in how they illuminate the way abstract forces, like capital and beauty, have palpable effects on our lives. Oddly enough, the Whitney includes
Ad Reinhardt
’s Abstract Painting (1960–66)—for its refusal of colors other than black. But it is elsewhere in the show, with
Melvin Edwards
’s sculptural installation Pyramid Up and Down Pyramid (1969/2017) that the notions of abstract form and content are really put into play. In this work, two delicate pyramidal shapes are delineated with nothing more than barbed wire. Here the eternal beauty of the form serves to mark out territory, and to subtly mark how territory (voting districts, neighborhood boundaries determined by income levels and race, national borders) always defines who is in, good, or native, and who is not. 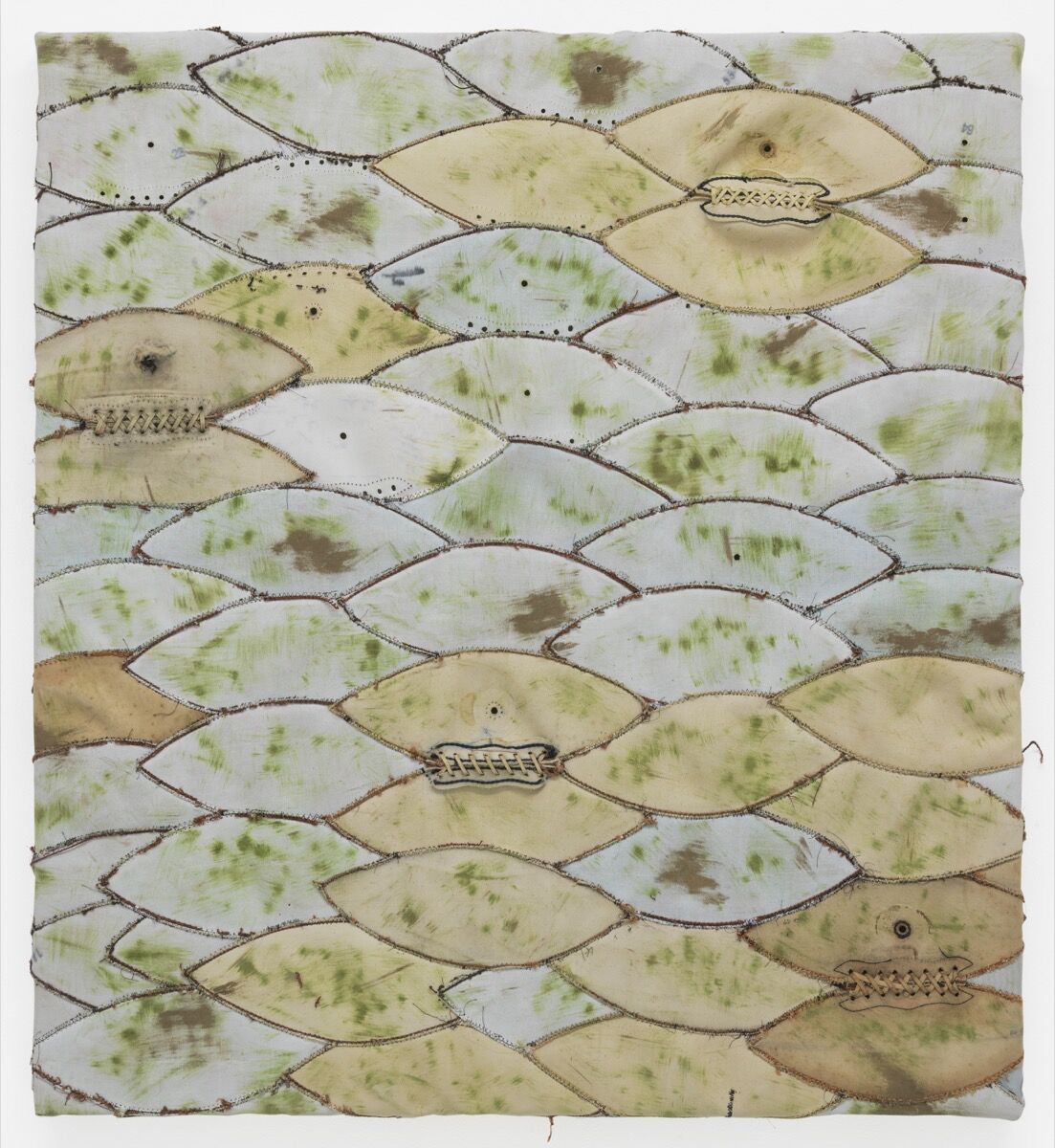 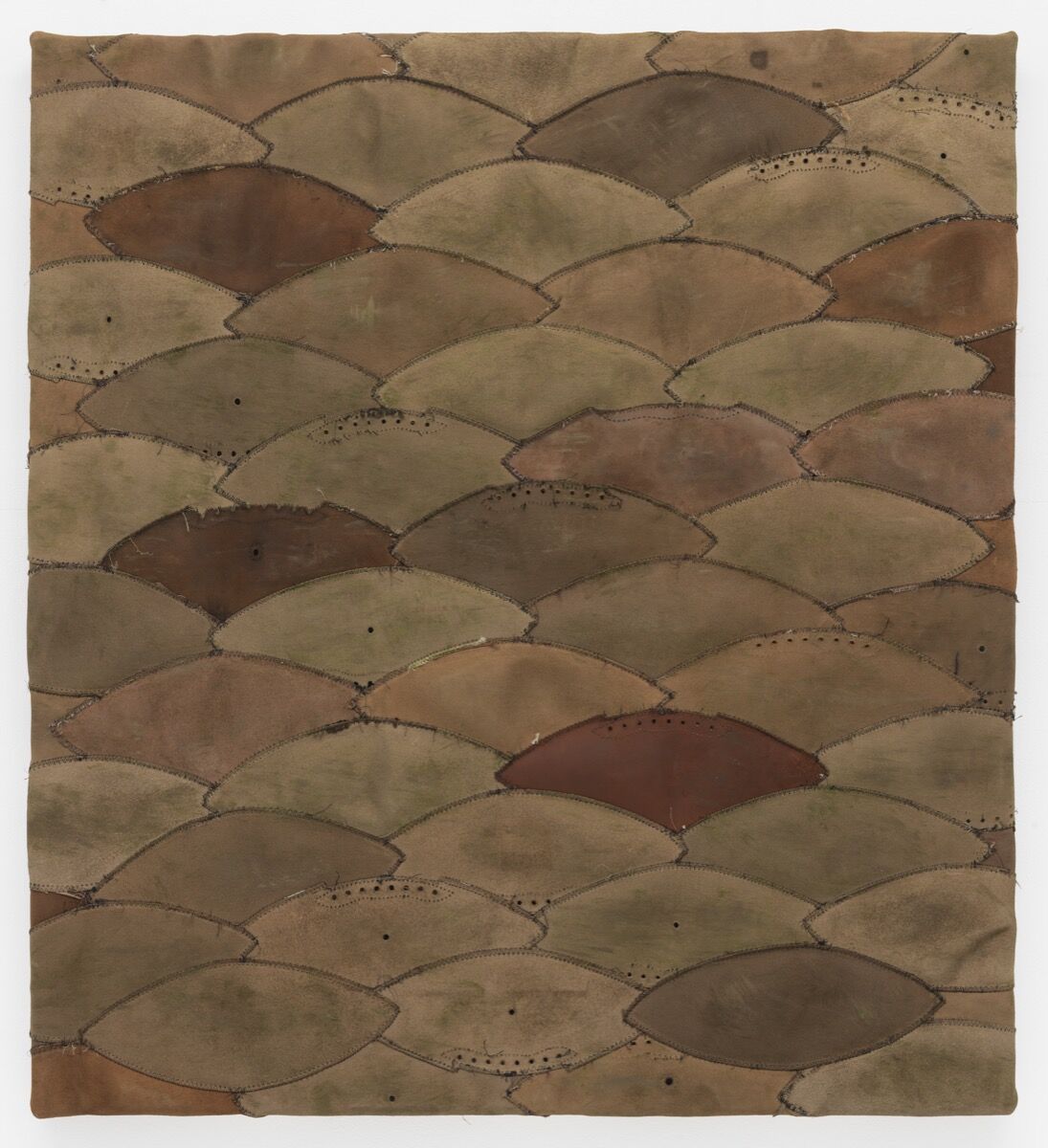 “Sidelined” curator Samuel Levi Jones, in some ways, takes up the conversation begun by Edwards. His two paintings in the show, convincing and comely as abstractions, are comprised of repeated ovoid shapes: sewn football pigskins that bear grass stains from where Jones rubbed the material on fields that he, a former college football player, once spent time on. Consider, for example, how the whiter of the two paintings, No Fucking Liberty (2017), which was made from the underside of the footballs, asks us to give substance to abstract concepts—like liberty, capital, and patriotism—to render the vague shapes these notions have in our minds as concrete as footballs, to stain these colorless abstractions with our own experience.
So, let’s start with liberty: Overwhelmingly white team owners, by forcing players to stand during the anthem, silence their right to protest speech. Is patriotism for the players a condition of employment? And if so, who decides what is patriotic? Certainly, those who control the money have a weighty say. If we decide to mark athletics off as a territory where speech is not quite free, what arena is next?
We might imagine the art world is a bastion of free speech, but even there money curbs our liberty. Recently, for instance, the director of the Queens Museum was forced to step down by a conservative board, which controls the purse strings. Museum boards and acquisition committees also have an outsized say in what works get bought for and ultimately shown by museums, while the market itself punishes those deemed unattractively political. Since we all spend the vast majority of our waking lives at jobs—and even when we’re not actually at the office our behavior and opinions are subject to review by employers—how free to speak out are any of us? What sort of freedom exists when every aspect of life is subject to the market?
Those who ask if politics stain the beauty of art or, for that matter, the enjoyment of an entertaining football game are really asking, “Will it sell?” Will, as Trump has suggested, ticket sales drop? Whereas the more pertinent question is: Will we finally buy what these protests have to say?
Daniel Kunitz
Related Stories