The Revolutionary New York Workshop Where Pollock Made Anti-Fascist Art 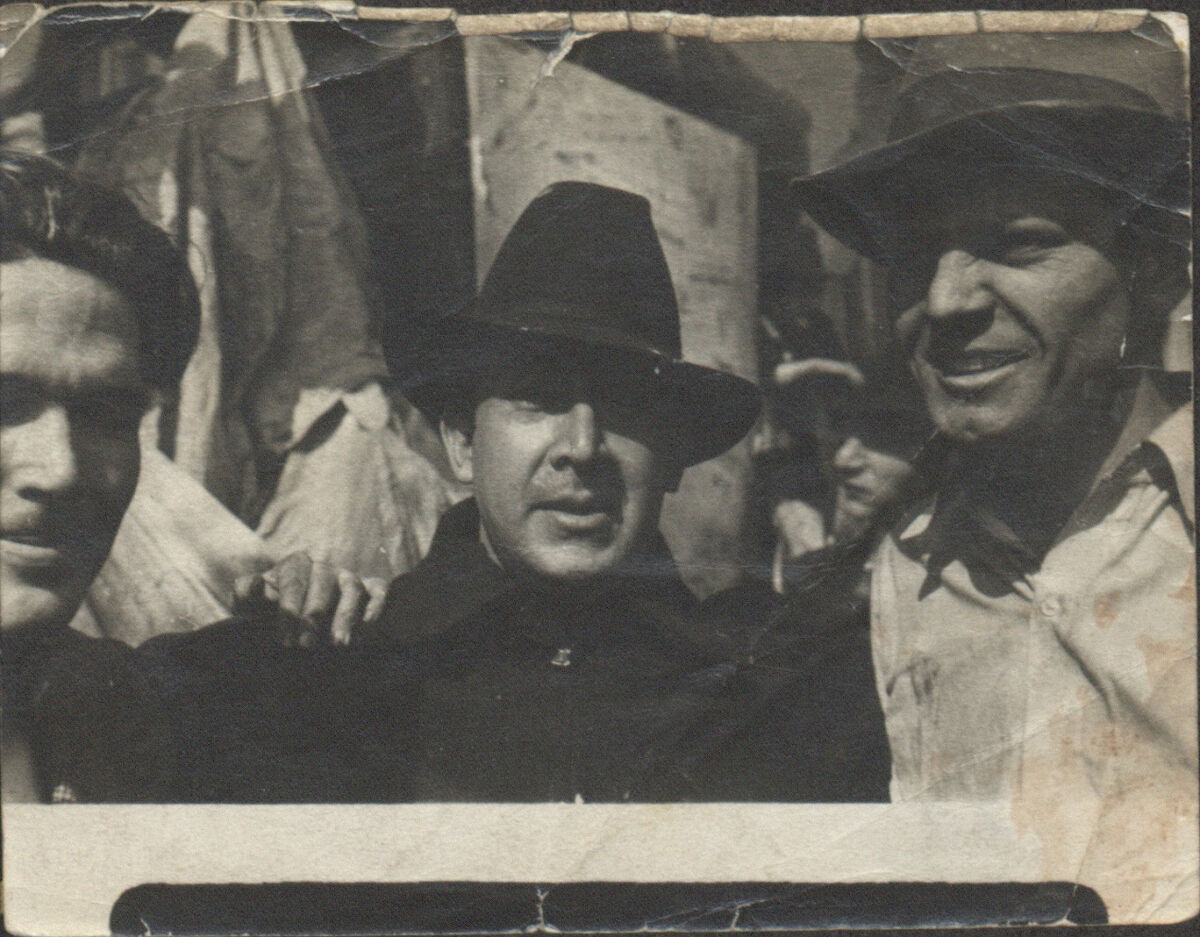 In 1936, as the tide of fascism swelled in Europe, a group of artists in New York set about formulating a response that would both promote the cause of art and counter the rise of politically oppressive regimes.
The first session of the American Artists’ Congress—as the organization they developed was known—took place in February 1936, and featured a presentation from the Mexican muralist
David Alfaro Siqueiros
, a staunch Communist whose art carried a message of social justice. The organization’s slogan was “Against War and Fascism.”
During his speech titled “The Mexican Experience in Art,” however, the political firebrand Siqueiros spoke out against more than just fascism. Since the early 1930s, the artist had been evolving some of the most radical techniques in mural painting, preferring quick-drying cement and automobile lacquer shot from a commercial spray-gun to the traditional pigment-and-plaster fresco methods adopted by his compatriots.
For Siqueiros, revolutionary ideas required revolutionary techniques and materials; you simply couldn’t make a moving work of political art in the modern era with the same techniques used by religious practitioners in 13th-century monasteries.
The artists present listened to Siqueiros’s speech with great interest and excitement. So much so that, not long after, they helped him to establish the Siqueiros Experimental Workshop in a studio space in Union Square—which the artist referred to as a “Laboratory of Modern Techniques in Art”—whose mission was to teach would-be anti-fascist artists about radical new methods and materials. There, he would find an unlikely student: the future
Abstract Expressionist
Jackson Pollock
.
Before he was “Jack the Dripper,” the Western-“cowboy”-turned-New-York-intellectual, or Life magazine’s proposed “Greatest Living Painter in the United States,” the young Pollock was a follower of the Mexican muralists who were working in the United States during that decade. Growing up in California, he saw
Diego Rivera
’s murals in San Francisco and traveled to see
José Clemente Orozco
’s Prometheus mural at Pomona College in 1930.
In New York, he would have seen Orozco’s work at the New School for Social Research, and he certainly couldn’t have missed the fiasco surrounding the destruction of Rivera’s mural Man at the Crossroads at the Rockefeller Center in 1934, where he witnessed it being painted a year earlier. 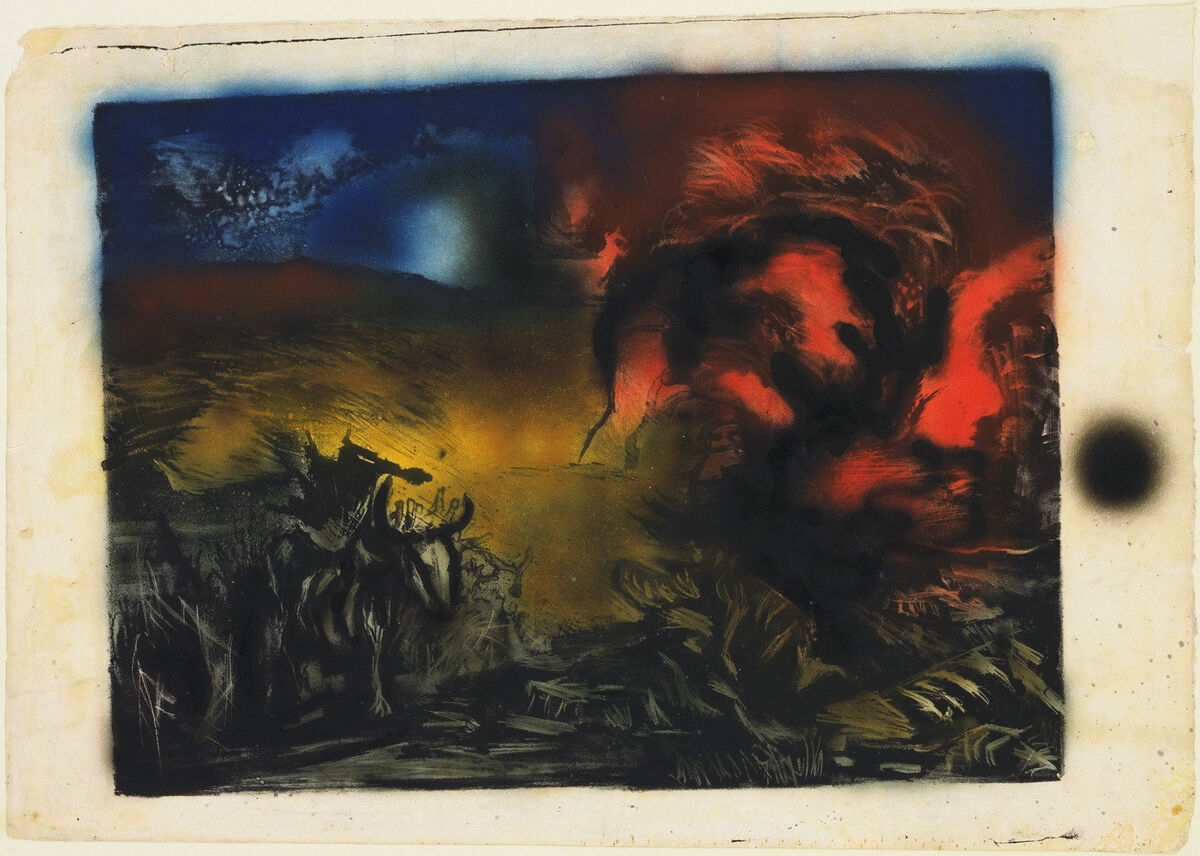 Drawn to Siqueiros’s laboratory, Pollock and his fellow students made large-scale public artworks to bolster the anti-fascist cause. As Siquieros’s assistant Harold Lehman later recalled, the ideas for early works were “the public use of art, big banners, floats, and big demonstration pieces and things of that nature for parades, gatherings, conventions, meetings. Not particularly for exhibit.” And indeed, some of the best-known works from the experimental workshops—which were often ephemeral in nature—exist only in descriptions and photographs.
The very same year it launched, the workshop accepted a commission from the American Communist Party to paint two large portraits of its presidential and vice-presidential hopefuls, Earl Browder and James Ford, for its 1936 convention. To create them, photographs were taken of the two men and a film projector was used to cast them onto two panels. Sketches were made, then painted over with modern nitrocellulose pigments; the portraits can be seen prominently displayed in a photograph of the workshop.
For the May Day parade that year, Pollock worked on a wooden armature of an allegorical float, which workshop historian Laurance Hurlburt described in detail:
“The Workshop’s embodiment of Wall Street capitalism shows the figure’s head topped with a swastika and holding in his outstretched hands emblems of the Republican and Democratic parties (thus symbolizing Wall Street control over the U.S. political system). A gigantic moving hammer adorned with the Communist hammer and sickle, which represented the unity of the North American people, smashed into oblivion a Wall Street tickertape machine, spewing the tape blood-like over the capitalist figure.”
Lehman would also remember a later float from the workshop, in which a group of worker-soldiers representing the countries allied against the Nazis stood before a papier-mâché Hitler. Between them, mounted on a spring, was a boxing glove attached to a moveable shaft that allowed the soldiers to “punch” the German dictator. “So knock out Hitler!” he excitedly concluded.
Though giving the Third Reich a black eye through representational art was certainly a noble goal, experimentation in Siqueiros’s workshop also led artists to more art-centric developments: namely, the cultivation of abstract aesthetics. One anecdote recalls Siqueiros constructing something resembling a Lazy Susan, filling it with paint, and spinning it atop a horizontal canvas—a predecessor to Pollock’s later drip technique. 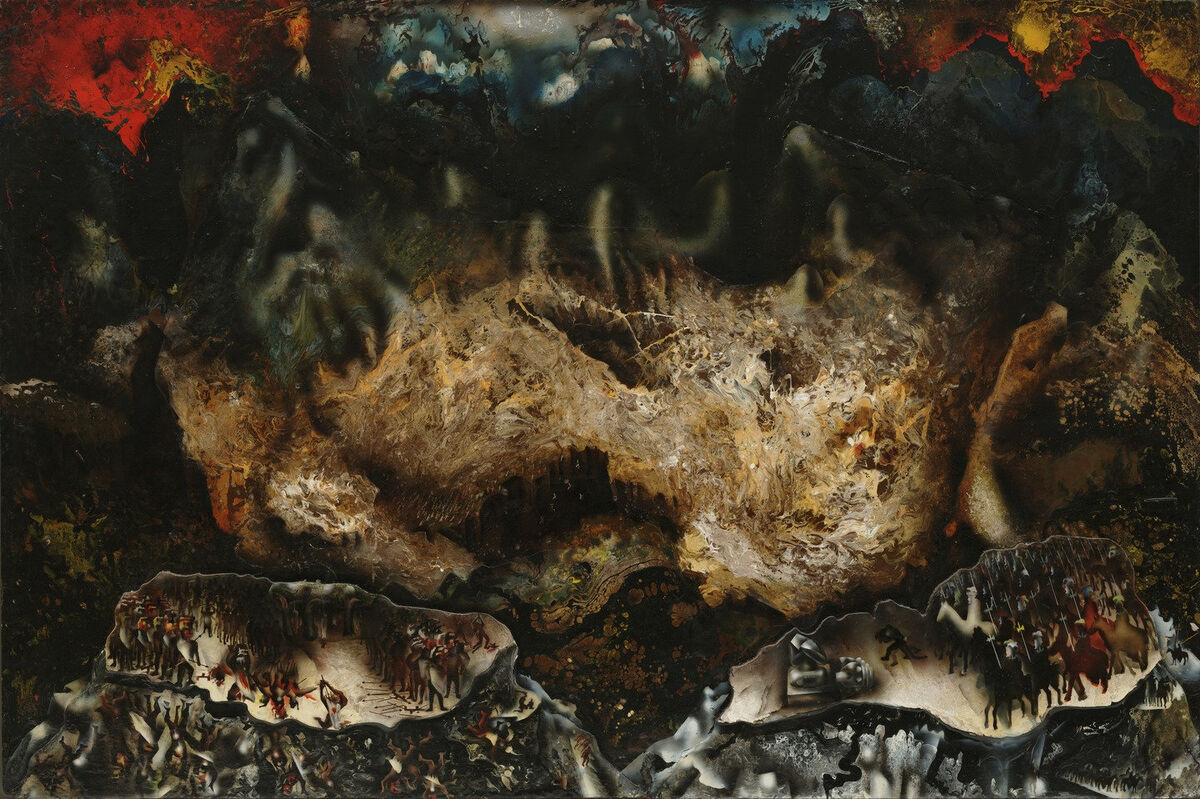 Advertisement
While it can be hard to attribute specific Pollock works to the period he spent at the workshop, the lithograph Landscape with Steer from that year shows him using an airbrush and automobile lacquer—two of Siqueiros’s favorite tricks. It features a chaotic landscape that hovers somewhere between the figurative and abstract.
Siqueiros’s own work—typically figurative and legible, as befitted the educational goals of Mexican muralism—was at its most abstract in a piece like Collective Suicide, for which he used a jigsaw, stencils, and an airbrush, as well as lacquer and paint thinner, to create an image. What Siqueiros in 1936 called a “controlled accident” would influence Pollock’s own later declaration that his drip paintings were not chaotic, but purposeful. Pollock would also claim in a 1950 interview that “new needs need new techniques,” an echo of Siqueiros’s axiom.
As for Pollock’s own politics, it’s hard to know exactly what views he held, and most historians don’t read political significance into his abstract work—though his paintings would later be used by the CIA to promote American freedom and individualism as a safeguard against Communism during the Cold War.
It’s somewhat ironic, then, that in an interview in 1981, Clement Greenberg angrily proclaimed that Pollock was a “goddamn Stalinist from start to finish,” perhaps due to Pollock’s early relationship to Siqueiros.
For his part, Siqueiros would close the workshop at the end of 1936 and, in 1937, he joined the fight against Fascism—this time in battle, not through art—in the Spanish Civil War. The painter would later lead an assault on the compound of Leon Trotsky when the Soviet thinker was taking refuge in Mexico in 1940, which much of the American left held as evidence of Siqueiros’s misguided politics in the later part of his life.
Pollock never divorced himself from the Mexican painter, though, and a December 1936 letter from Siqueiros—directed only to Pollock, his brother Sandy, and his assistant Lehman upon the occasion of the closing of the workshop and signed “Always your comrade, A. Siqueiros”—suggests that the Mexican artist recognized even then the promise of the 24-year-old protégé he guided in anti-fascist resistance through artistic experimentation.
Jon Mann
Related Stories