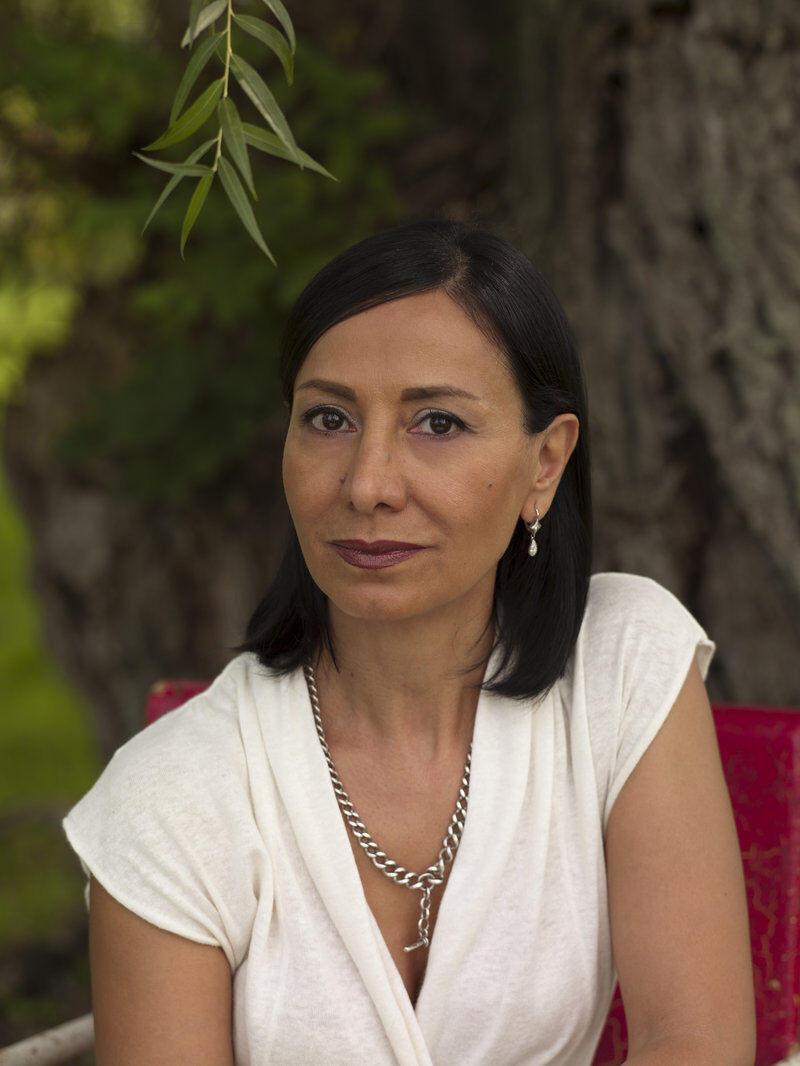 At Leila Heller Gallery’s newest show, 18 sliced copper sculptures hang from safety pin chains in a cascade along one wall, while intricate ink drawings displayed in rigorously organized arrangements fill the others. This is the work of the Iranian, New York-based artist
Pouran Jinchi
, in her second solo show with the gallery, “Black & Blue.” Ambitious in scope, the exhibition features several series of sculptures and drawings that explore conflicting motifs of beauty and pain, taking cues from a notorious work of Persian literature and the coloration of a bruise. 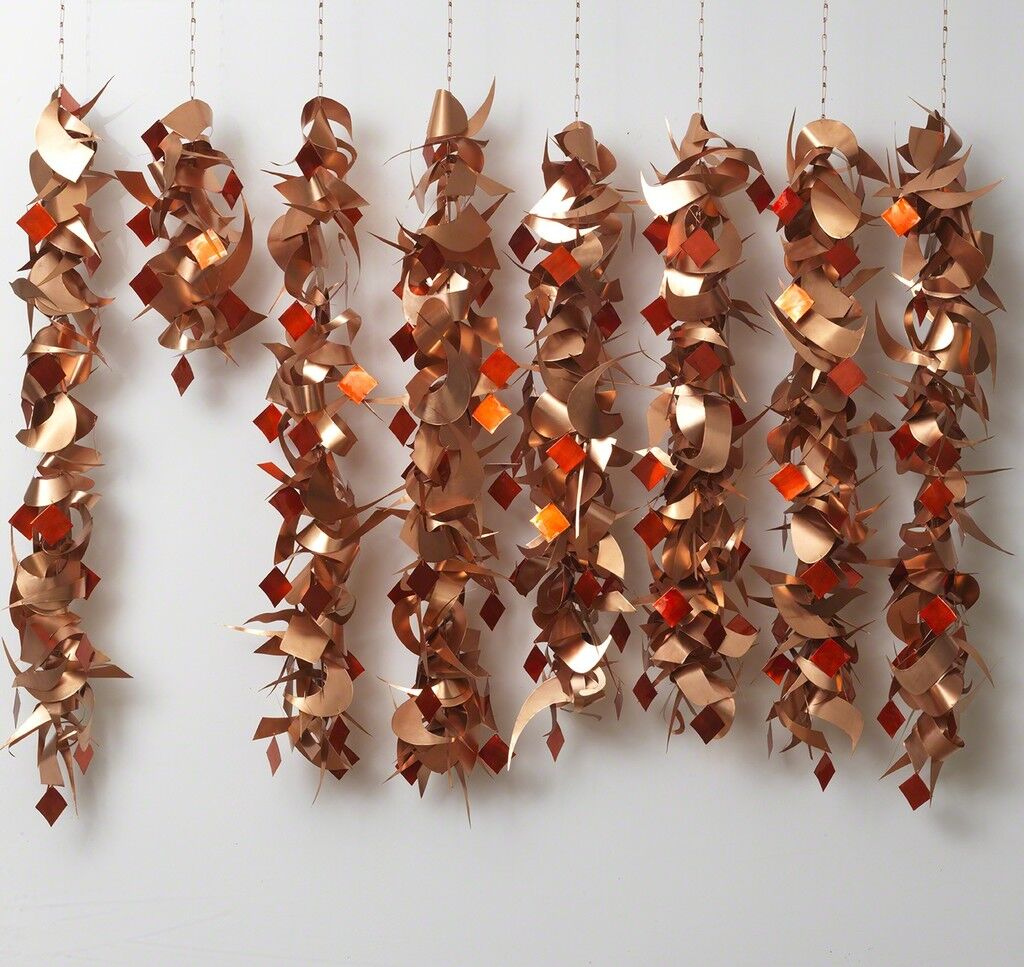 Pouran Jinchi
Hanged series , 2015
Leila Heller Gallery
Jinchi’s process involves pulling fragments of Farsi
calligraphy
from original texts and then transforming individual characters and accents into abstract, evocative shapes and patterns. “I am fascinated by the power of language, which can enable communication but also create barriers of understanding,” Jinchi recently told Artsy. “My first encounter with calligraphy was as a child, and I took a great interest in it growing up in Iran. There is something very mathematical and expressive about calligraphy.” 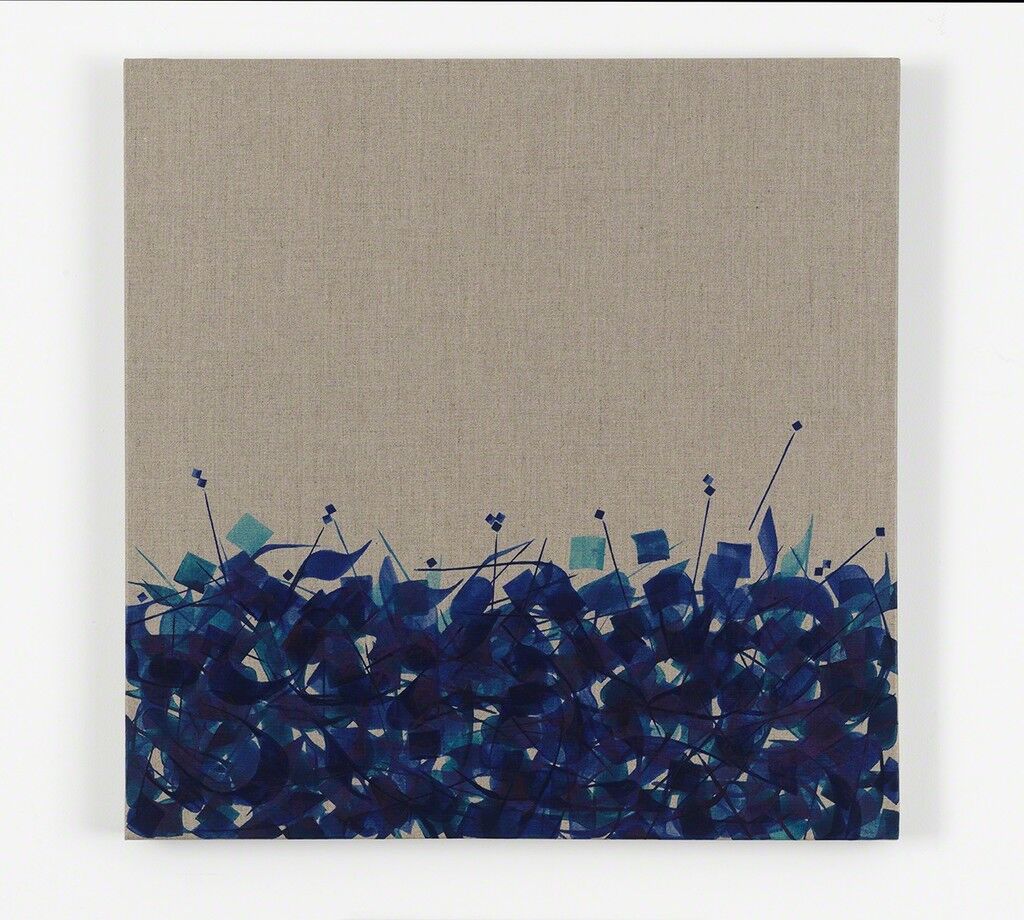 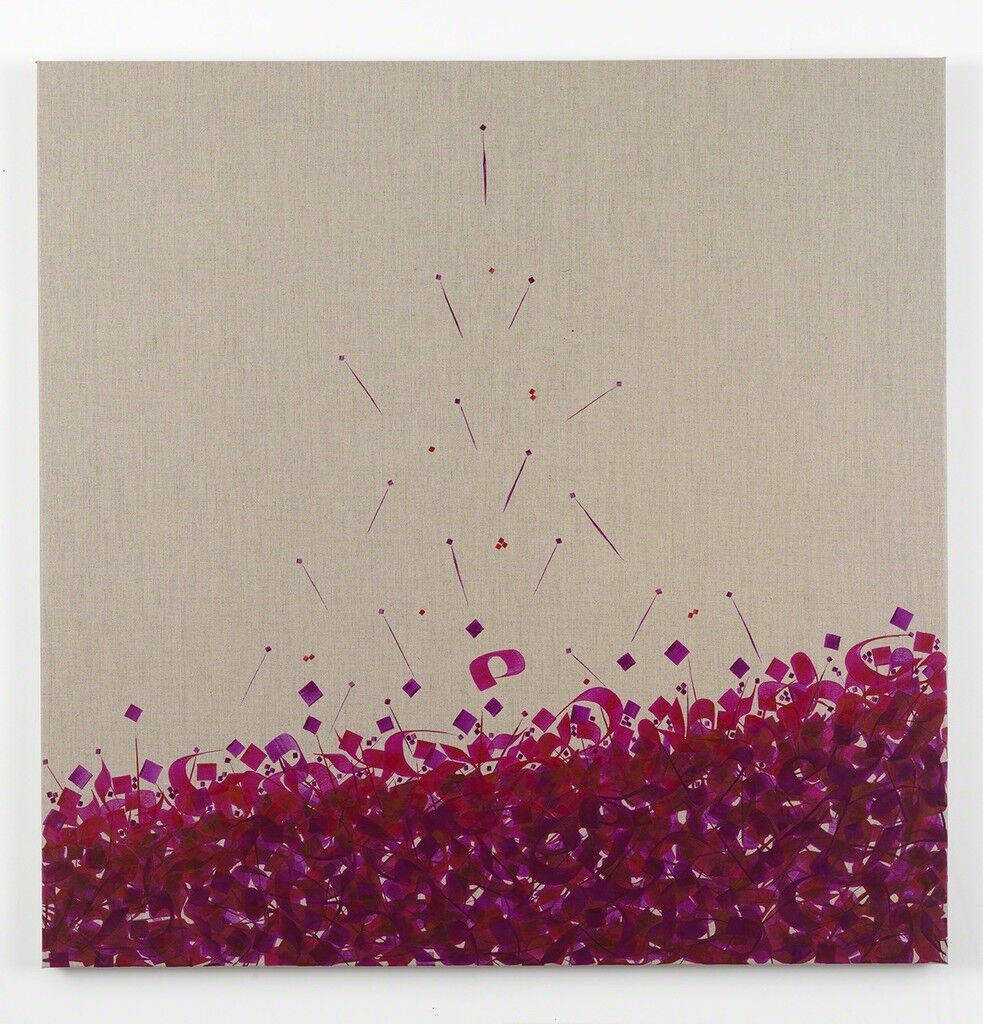 Pouran Jinchi
Wound 4, 2015
Leila Heller Gallery
Advertisement
In these works, Jinchi engages with text from Sadegh Hedayat’s The Blind Owl, a book she first encountered as a teenager living in Iran. “It was banned by the government,” Jinchi explains, “and there were rumors among parents that if your children were to read this book, they would commit suicide.” Compelled by curiosity and a yearning to rebel, Jinchi read it with, in her words, “a sense of guilt and thrill.” She revisits the book’s aspects of pain and violence in new works like the “Hanged” series (2015), in which barbed strips of metal shine alluringly under gallery lights, casting otherworldly shadows and conveying a sense of imminent danger. 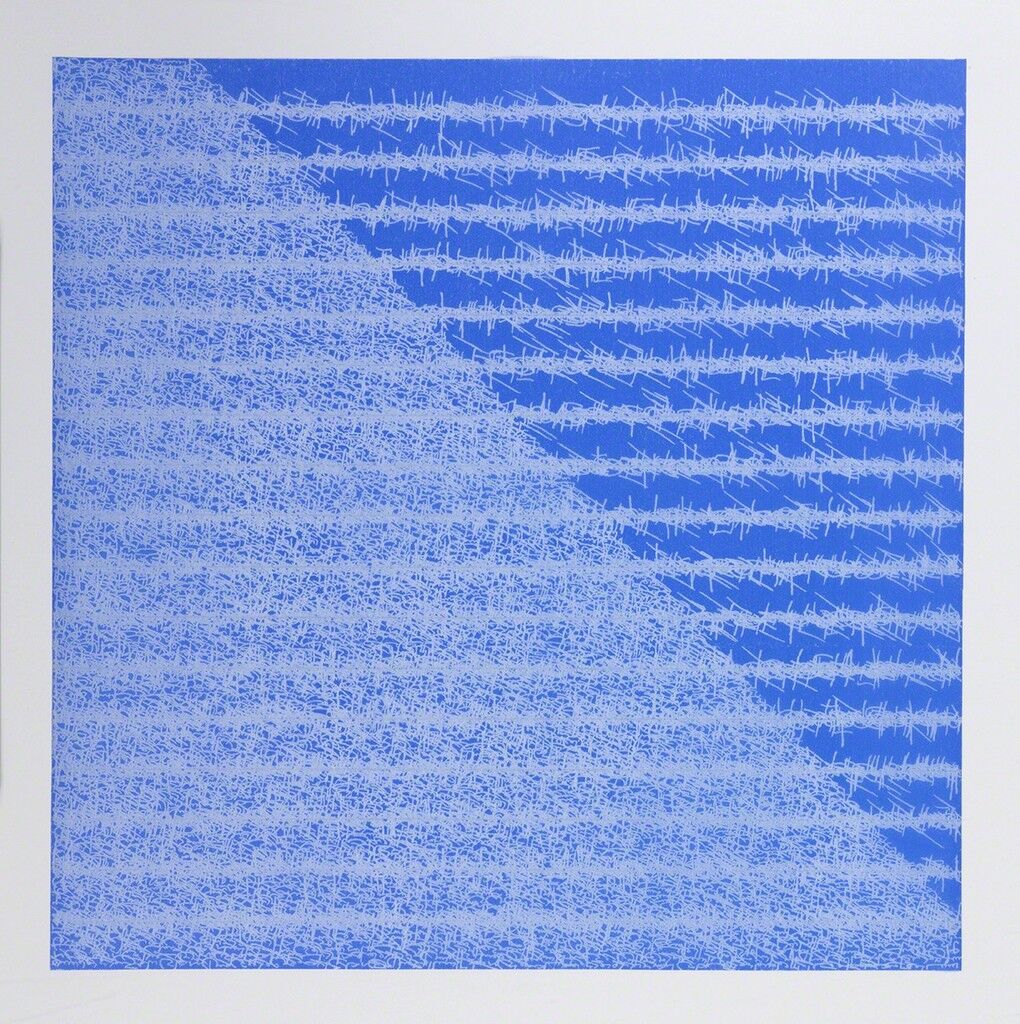 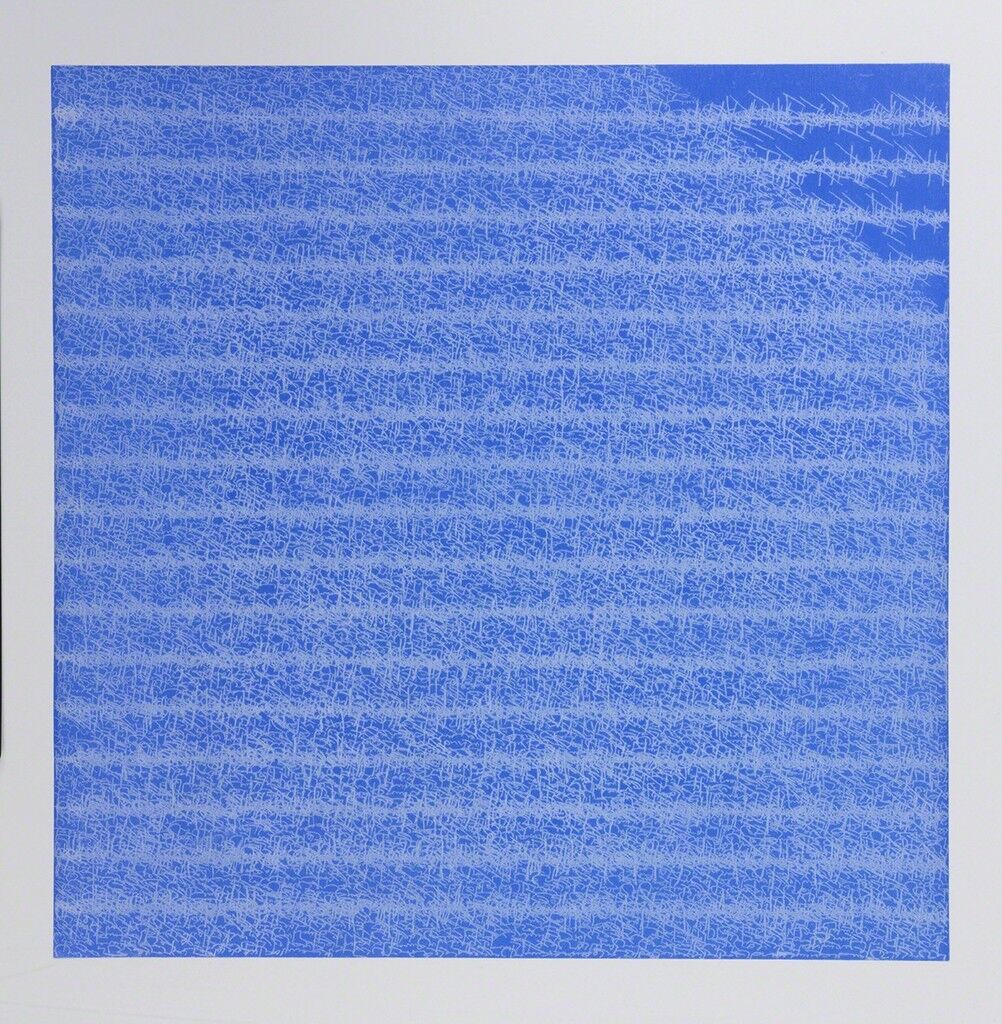 Pouran Jinchi
Bruised 1, 2014
Leila Heller Gallery
Jinchi gravitates toward ritualistic, repetitive tasks in her practice. For the series “Bruises” (2014), for example, she copied line after line of text, layering them seemingly ad nauseum, or until the words—and, consequently, their meanings—were unintelligible. Her process is articulated in white, scrawled-out letters on sheets of cool blue carbon paper. When shown together, the works cohere into a narrative, each once evidencing a subtle, shifting diagonal. 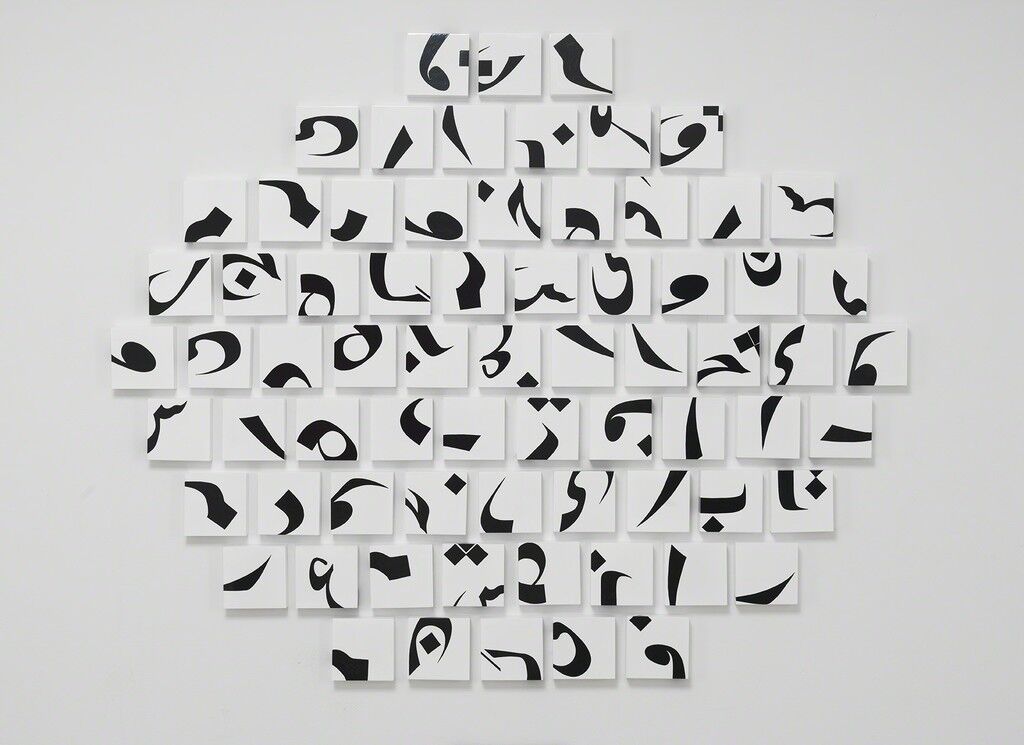 Pouran Jinchi
Slashed, 2014
Leila Heller Gallery
When asked to name artists that she admires, Jinchi refers to
Irma Blank
,
Alighiero e Boetti
,
Zarina Hashmi
, and
William Kentridge
. Indeed her work recalls notes of Hashmi’s striking, calligraphic patterns; Boetti’s interwoven squares; Kentridge’s lyrical storytelling; and Blank’s process of layering text to palimpsestic effect.
One passage from The Blind Owl informed much of the work Jinchi included in this show. It reads: “I write only for my shadow which is cast on the wall in front of the light. I must introduce myself to it.” This excerpt is a reminder of the way language transforms in new contexts, especially given changes in time and place; Jinchi’s works, fresh stylistic interpretations that experiment with text, are an elegant way to trace such an evolution.
—Anna Furman
“Black and Blue” is on view at Leila Heller Gallery, New York, Sep. 17–Oct 24, 2015.
Follow Leila Heller Gallery on Artsy.
Related Stories