The Most Powerful Moments of Photojournalism in 2017

Molly Gottschalk
Dec 22, 2017 6:27pm
In 2017, #photography became the most popular hashtag on Instagram, with its use up 78 percent from the previous year. The jump reveals that images are increasingly important vehicles through which to represent, and understand, reality. Below, we rounded up some of the most powerful moments from photojournalism. From an image of a white supremacist rally to a shot of men golfing as a wildfire rages in the background, this admittedly far from exhaustive list of photographs encapsulates some of the moments that defined the year. 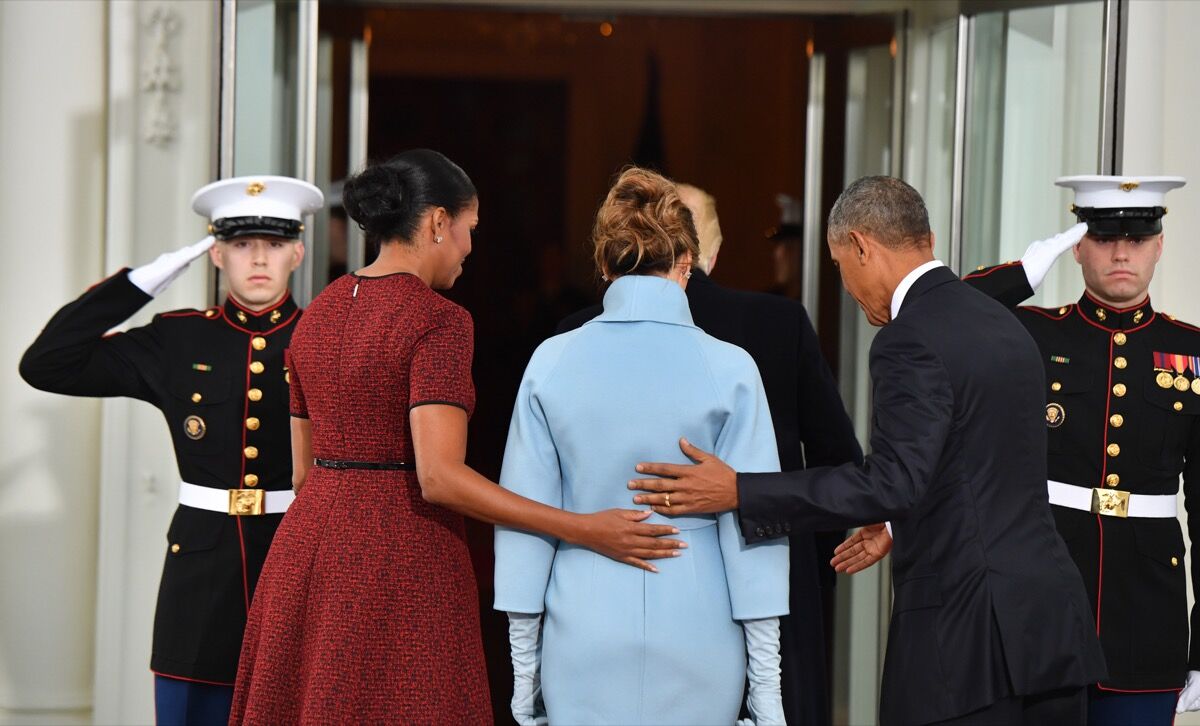 On January 20th, Donald Trump arrived at 1600 Pennsylvania Avenue in a Secret Service SUV to be sworn in as the 45th President of the United States. Instead of escorting the incoming first lady Melania Trump up the White House steps, as previous presidents have done, he charged ahead without her; and after greeting President Barack and First Lady Michelle Obama, he walked into the White House ahead of all three of them. This photograph by Kevin Dietsch shows Obama and his wife tenderly placing their hands on Melania’s back to help her through the door in Trump’s absence. The image followed a presidential campaign fueled by Trump’s sexist rhetoric and disparaging comments against his female opponent Hillary Clinton, leaving many in fear of what Trump’s victory could mean for women. But here, the image symbolizes the subtle, everyday manifestation of these comments.
As a historic number of protestors prepared for the Women’s March on Washington the following day, in which some 500,000 individuals gathered in solidarity for women’s human rights, Trump moved hastily toward his new throne while neglecting to show a basic courtesy to his wife.
The Obamas, who fought for and issued a record number of policies to encourage the fair treatment of women in the United States, are shown gently picking up Trump’s slack. And yet, with her head bowed and her robin’s-egg-blue gloves clenched into nervous firsts, the new first lady looks far more like she’s being led straight off a plank.

The Women’s March on Washington 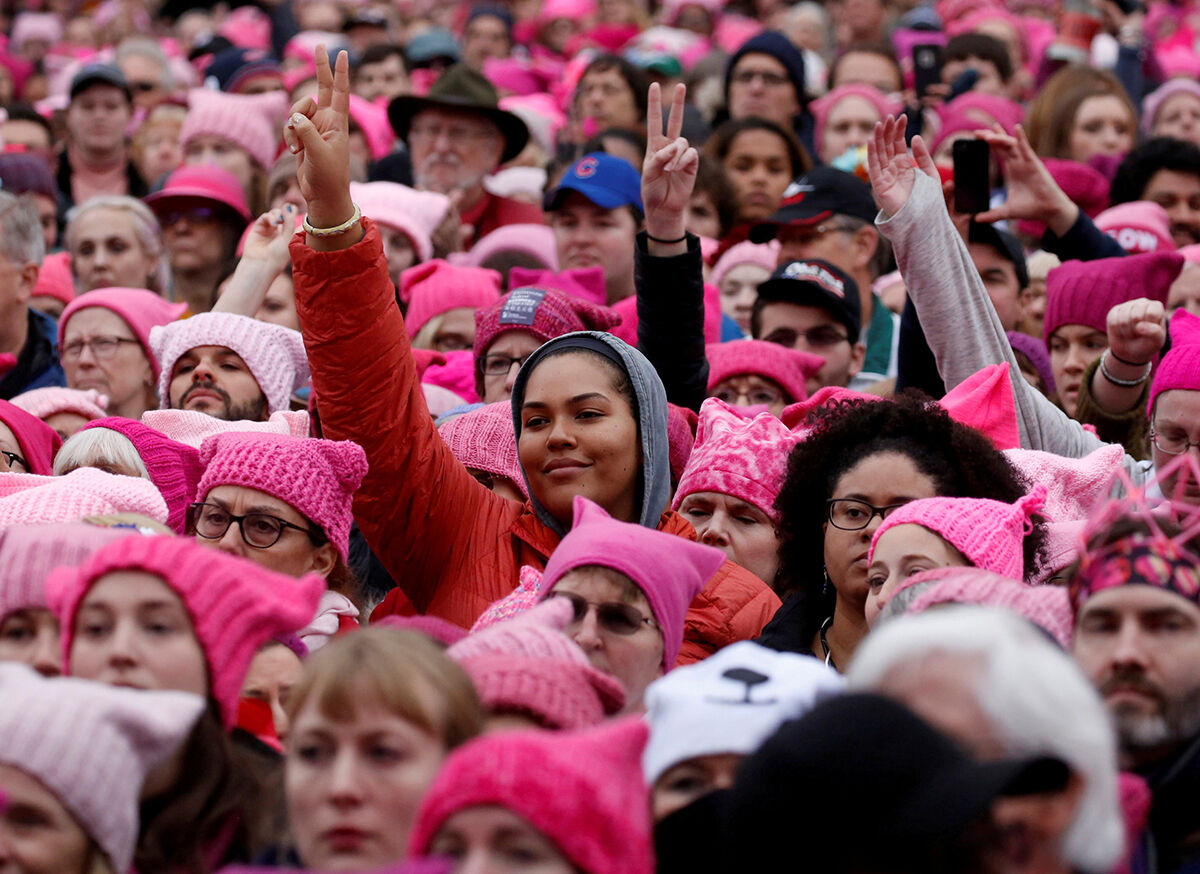 Advertisement
On January 21st, more than 500,000 men and women peacefully gathered on the National Mall for the “Women’s March on Washington” to protest the election of President Donald Trump—and roughly the same number of photographs were published to the March’s Instagram hashtag that day. But an image by Shannon Stapleton stands out from the rest. The photograph shows a tightly packed, majority female crowd donning “pussyhats,” the knitted pink caps that emerged as a symbol of solidarity for women’s rights and resistance to misogyny; their name came courtesy of Trump’s crude comments about grabbing women’s genitals without their consent. (Still, though women’s solidarity defined this march, it is worth noting that 52 percent of white women had cast their votes for Trump.)
Stapleton’s is among a number of images that present women of different ages, races, and genders, united in a sea of pink hats—no cap quite the same shade or shape as the next. But the range of expressions Stapleton captured sets her image apart. The pain and anger of the protestors is visible in their furrowed brows, closed eyes, and numb stares. Still, the image also incites hope, as we see a woman—one of the tallest in the crowd—smiling radiantly and flashing a peace sign. Her pose recalls some of the most iconic protest images which have defined movements throughout history. She holds her head high in an expression of bravery and peaceful resistance, at the start of a year that would test these virtues again and again.

Mohammed Mohiedin Anis in His Bedroom in Aleppo 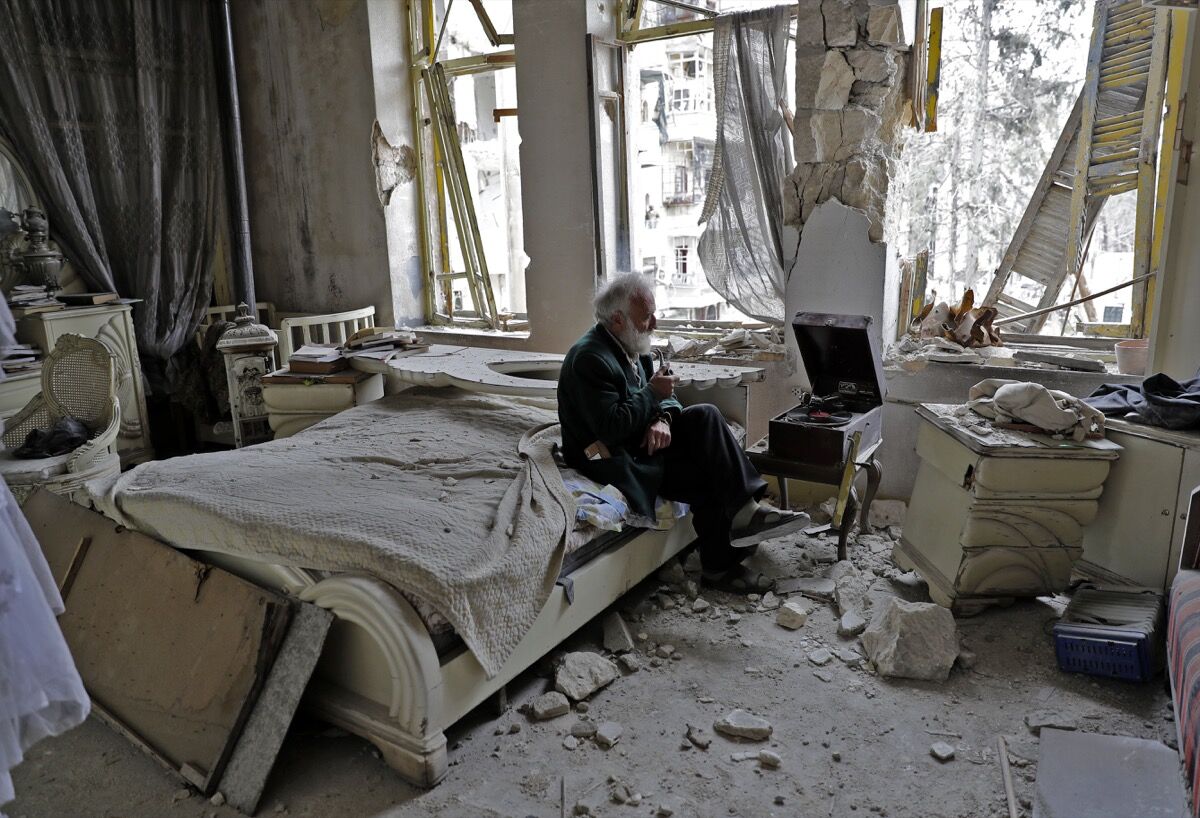 Mohammed Mohiedin Anis, or Abu Omar, 70, smokes his pipe as he sits in his destroyed bedroom listening to music on his vinyl player, gramophone, in Aleppo's formerly rebel-held al-Shaar neighbourhood. JOSEPH EID/AFP/Getty Images.

In the last few years, a devastating number of images have brought the horrors of the Syrian civil war—including its youngest victims—into view. On March 9th, less than a week before the sixth anniversary of Syria’s civil war, another image from the conflict surfaced and quickly went viral. The photograph shows Mohammed Mohiedin Anis (also known as Abu Omar) seated on his bed, which is covered with dust and small pieces of debris, presumably from the fallen-in windows and crumbling walls behind him. The house is located in the neighborhood al-Shaar, the site of a deadly battle that devastated the area in 2016.
Photographer Joseph Eid told TIME the story behind the image. He visited the home with the Beirut chief of news agency AFP at the time, Sammy Ketz, on a mission to connect with Abu Omar, a collector of some 30 vintage cars. Once invited into his home, they were brought on a tour that led to the scene captured in this image. As Eid described it, Abu Omar lit a pipe (pieced together with Scotch tape) before playing a record by Syrian singer Mohamed Dia al-Din. Although he’s seated among the ruins of his home, and a third of his car collection is gone, he is embracing the things he has left—a vinyl record player that does not require electricity; one of his favorite songs; sunlight, even if it streams in through shattered windows. He is neatly dressed in a dark green blazer and, it appears, is holding onto hope for the world.
“Whenever I feel or will feel any kind of despair or surrender to [life’s] problems and obstacles I will always [recall] the image of Abu Omar smoking his pipe while sitting on his rubble-covered broken bed and listening to his favorite music,” Eid told TIME. 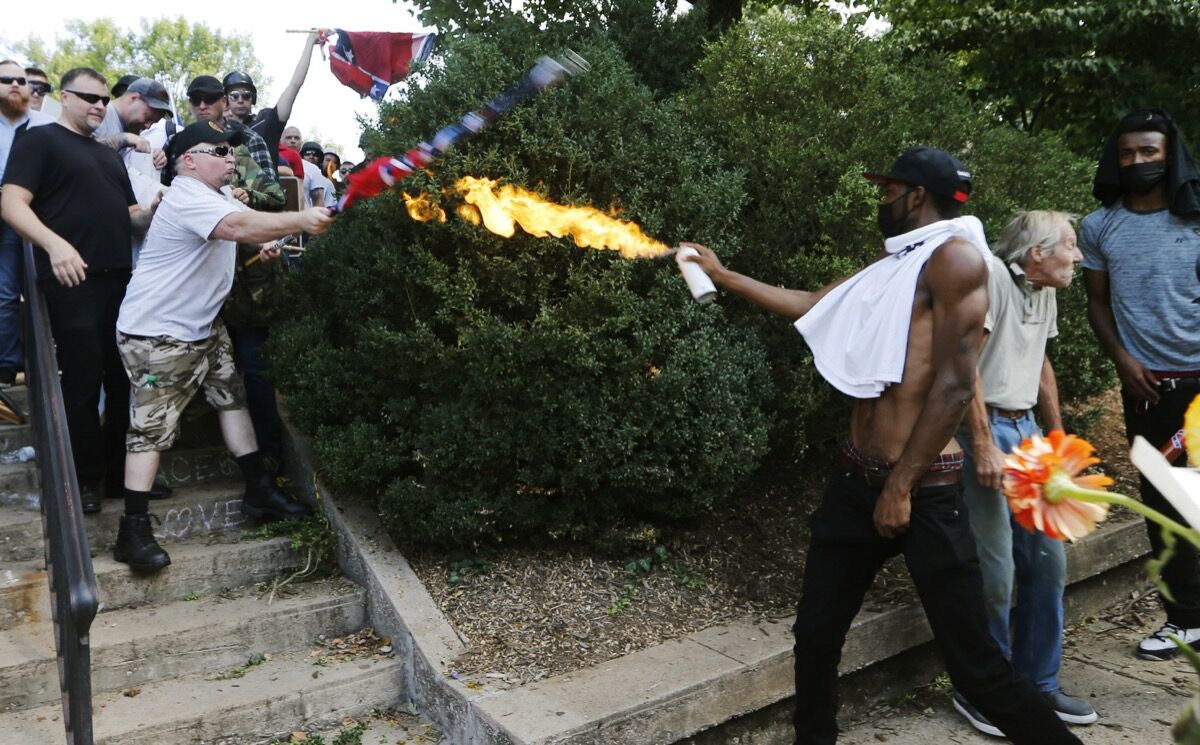 A counter demonstrator uses a lighted spray can against a white nationalist demonstrator at the entrance to Lee Park in Charlottesville, Va., Saturday, Aug. 12, 2017. Gov. Terry McAuliffe declared a state of emergency and police dressed in riot gear ordered people to disperse after chaotic violent clashes between white nationalists and counter protestors. (AP Photo/Steve Helber)

In August, a photograph of two men in confrontation during a white nationalist rally in Charlottesville, Virginia, circled the globe. On August 11, a group of white supremacists marched on the University of Virginia campus with burning tiki torches. The next day, thousands of white nationalists gathered in the city. AP photographer Steve Helber snapped a picture of a black counter-demonstor using an improvised flamethrower to ward off a white supremacist attempting to strike at him with a rolled-up Confederate flag. The white supremacist jabs from the fourth step of a staircase (we can see the word “love,” scrawled on the step between his legs). The image became a visual metaphor for the intensely divided racial politics in the U.S.
The counter-demonstrator, a 23-year-old Charlottesville native and eldercare worker named Corey Long, shoots fire from a spray-paint can that he outfitted with a lighter—a can, he said, that had been thrown at him by a white supremacist and which he’d rigged for his protection; he’d also had a gun held to his head. As the New Yorker pointed out, Long’s peaceful composure recalls the famous 1963 photograph of activist Gloria Richardson, coolly pushing off a National Guardsman’s bayonet. 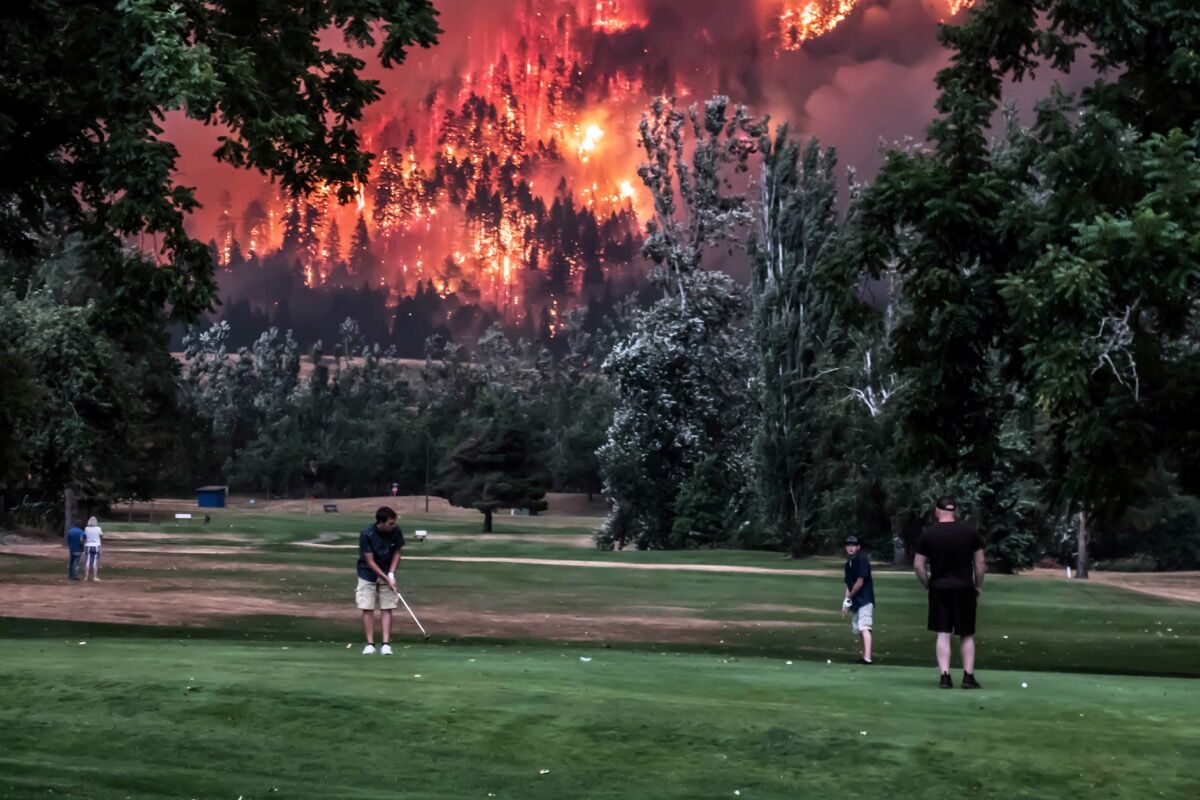 This year, newspapers across the country carried images of wildfires raging across California, part of what has been called the state’s “deadliest and most destructive” string of such blazes in its history. But it was not the only place ravaged by fire. On September 2nd, two teens playing with illegal fireworks accidentally set a fire that raged for roughly two months and incinerated nearly 50,000 acres of forest in Eagle Creek, Oregon. An image by amateuer photographer Kristi McCluer shows three men playing golf as the massive fire fills the Oregon sky. McCluer found herself on the golf course while seeking an open space to shoot the fire, away from many spectators—and there she discovered a game in progress, backdropped by giant plumes of smoke and a burning sky.
McCluer emphasized that the men were not in danger; that the fire was over a mile away and the golf club’s grass well watered; that you couldn’t feel the heat. The course’s isolation from real world events is precisely what gives the image its power. To many, it served as a symbol of people’s disregard for the planet: As a fire accelerated by global warming raged, some people decided to hit the linx as if all was fine. 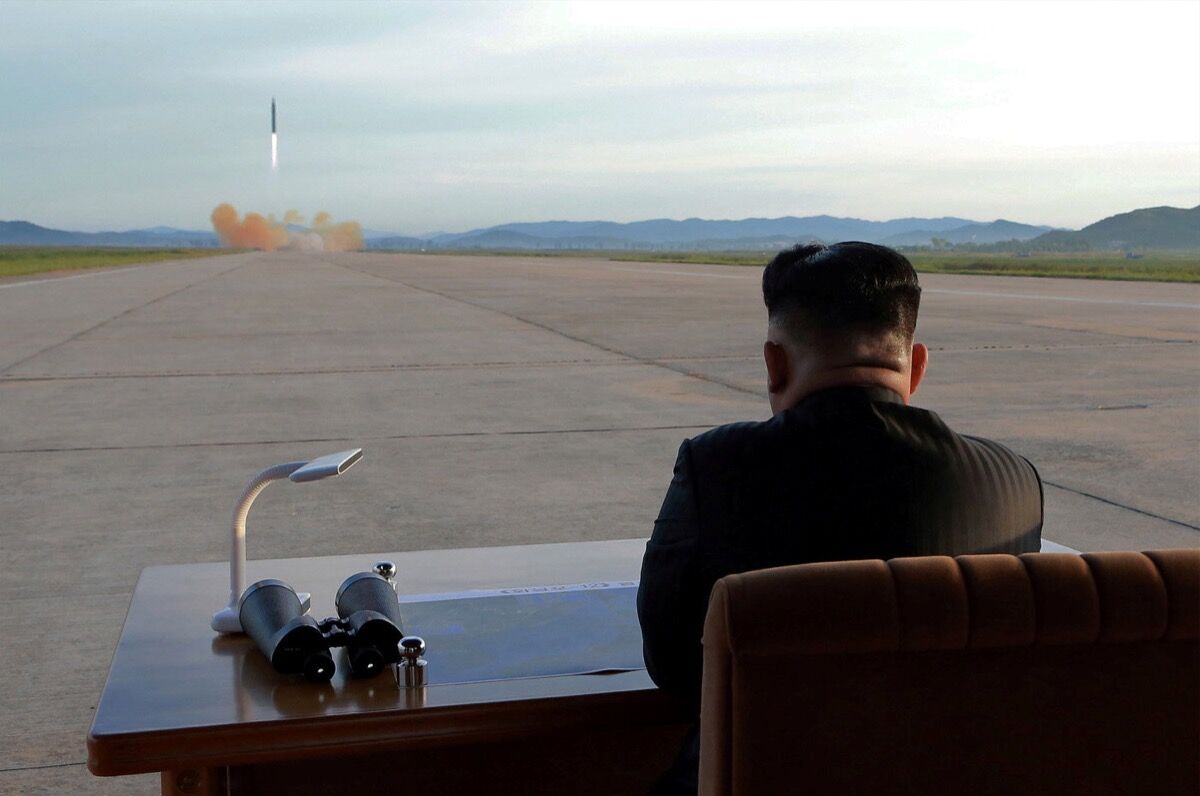 In September, North Korea’s leader Kim Jong-un launched a ballistic missile over Japan—the first missile fired following the U.N.’s recent sanctions against the country, meant to halt its nuclear program. Amid frightening rhetorical escalation from both the United States and North Korea, many were afraid of the potential for war.
One chilling, painstakingly composed image stoked that fear further. In it, Kim watches a missile lift off from a runway near Pyongyang’s international airport. He is pictured from behind while seated in a large chair at a formal wooden desk—one almost expects him to slowly swivel around, like any great cinematic villain, in a dramatic reveal. There’s a paper map sprawled across the desk, presumably tracing the missile’s projected path as it soared 2,300 miles over Hokkaido, Japan. (It was North Korea’s longest-ever ballistic missile test flight, enacted to build on the goal of being able to one day reach the mainland United States.) Kim’s excitement is palpable, as if he’s watching his favorite team on the verge of a winning touchdown. The image underscores the hyperbolic bluster erupting on both the U.S. and North Korean sides, with Trump calling Kim “Little Rocket Man” and threatening “fire and fury like the world has never seen,” and Kim labeling the U.S. president a “dotard” and a “frightened dog.” 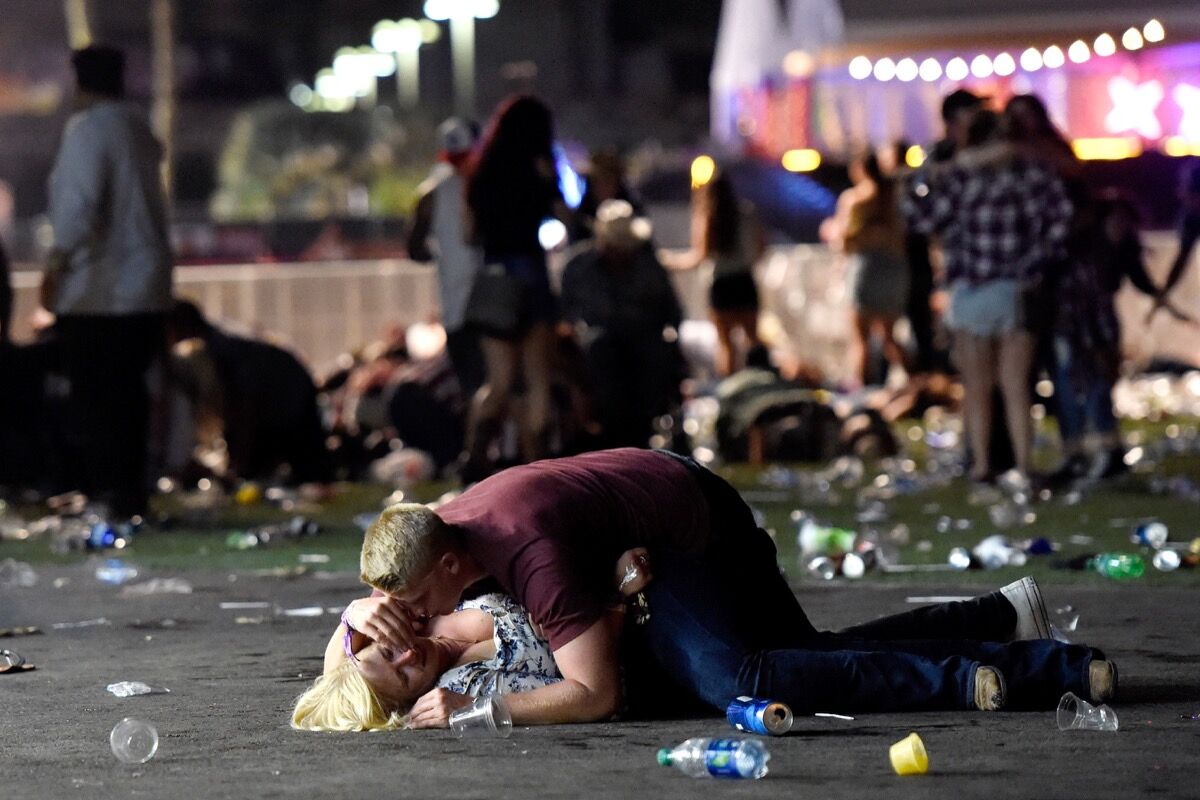 LAS VEGAS, NV - OCTOBER 01: A man lays on top of a woman as others flee the Route 91 Harvest country music festival grounds after a active shooter was reported on October 1, 2017 in Las Vegas, Nevada. A gunman has opened fire on a music festival in Las Vegas, leaving at least 2 people dead. Police have confirmed that one suspect has been shot. The investigation is ongoing. The photographer witnessed the man help the woman up and they walked away. Injuries are unknown. (Photo by David Becker/Getty Images)

In October, Stephen Paddock opened fire on 22,000 people at a country music festival in Las Vegas, killing 59 and injuring 527 in the worst mass shooting in modern U.S. history. A photograph, taken by David Becker, shows a young man lying on top of a woman, his body covering hers almost entirely; he appears to shield her eyes from seeing the massacre that surrounds her. With the background blurred, their interaction is thrown into relief. You can see every speck of dirt on the carpet and almost feel the sweat on the back of his shirt. Even though statistics capture the number of lives lost in this (and other sadly common) tragedies, sometimes the humanity of those actually impacted by such violence is lost. This image is a powerful reminder of the individuals who faced unimaginable tragedy in Nevada that day.
It was later revealed that the man seen in the photograph, U.S. Army cavalry scout Matthew Cobos, didn’t know the unidentified woman at all. Once he’d brought her to safety, he went back to help others, reportedly turning his belt into a tourniquet and plugging bullet holes with his own fingers. As we struggle to understand how one heavily armed human being could be so callous with the lives of others, this moment serves as a small symbol of hope.
Molly Gottschalk is Artsy’s Lead Visuals Editor.
Related Stories