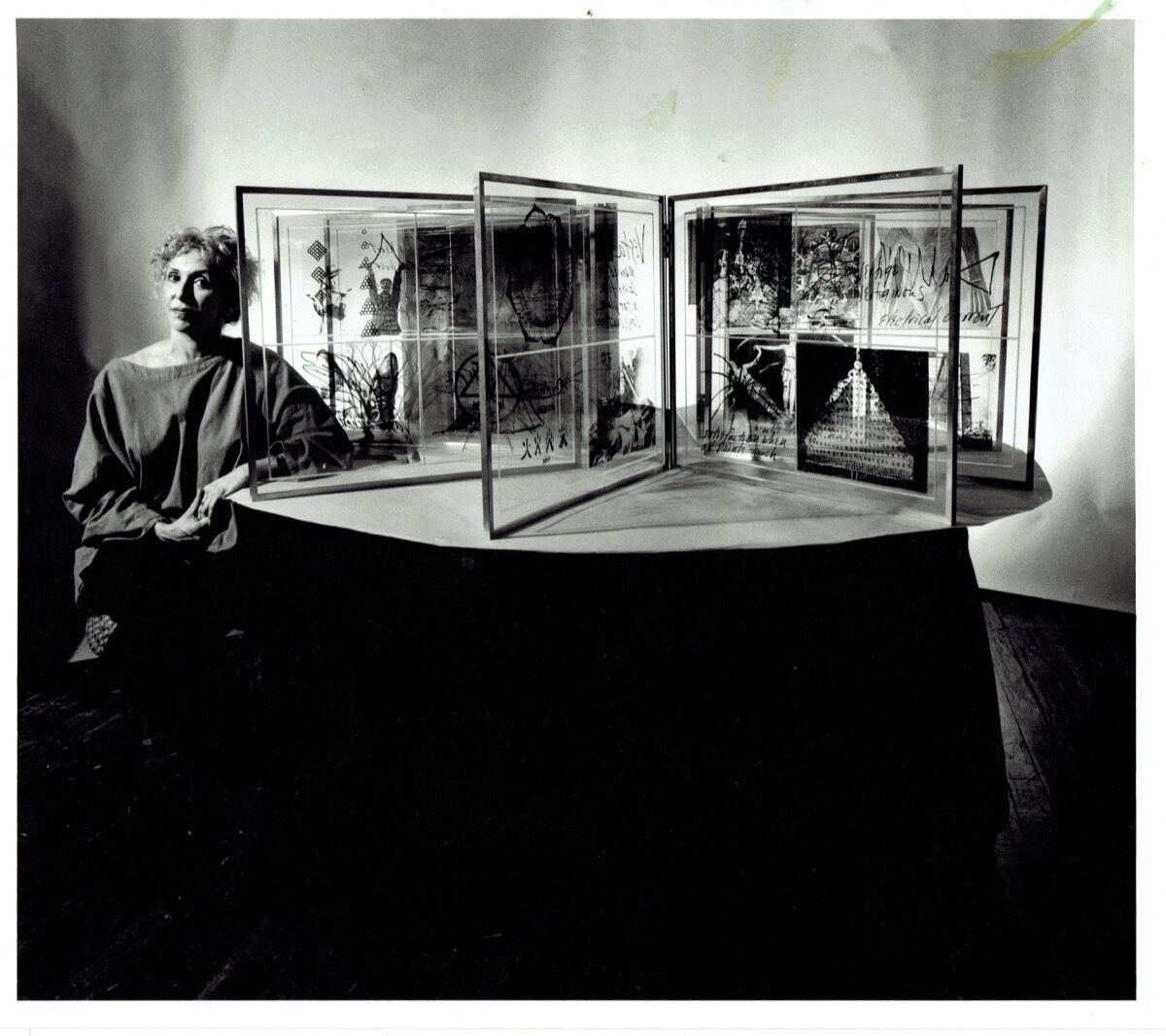 It began with a simple dream. One fateful night, an umbrella and a bouquet of dried flowers, both shaped like the letter “V,” appeared in the sleeping mind of artist
Carolee Schneemann
. Not long after, these objects became the crux of Fresh Blood - A Dream Morphology (1981–7), a project that led Schneemann to accumulate hundreds of images of the vagina over the course of six years.
“It was a great biological gift to work for six years with these images that were so...the only word that comes to mind is fruitful,” Schneemann tells me with a laugh, over the phone from her home and studio in upstate New York. Female genitalia is a topic that’s been at the center of the artist’s powerful feminist work for the past 50 years. Today, it’s also notably located at the heart of the U.S. Presidential election’s recent controversy—the emergence of a 2005 tape in which a showboating Donald Trump boasts about grabbing women anywhere he wants, anytime he wants.
“The thing is, he’s bringing forward the submerged, denied, and marginalized issues that we all experience,” Schneemann ponders. These are issues that the artist has made a career of tackling, through a constant stream of incisive performances, videos, and installations, several of which will be on view in two exhibitions, “Further Evidence - Exhibit A” and “Further Evidence - Exhibit B,” which open at New York galleries P.P.O.W and Galerie Lelong this week. In light of Trump’s misogynistic statements—and the furious conversations around the marginalization, sexualization, and abuse of women that they’ve inspired—a large-scale show of Schneemann’s work couldn’t come at a more appropriate time. 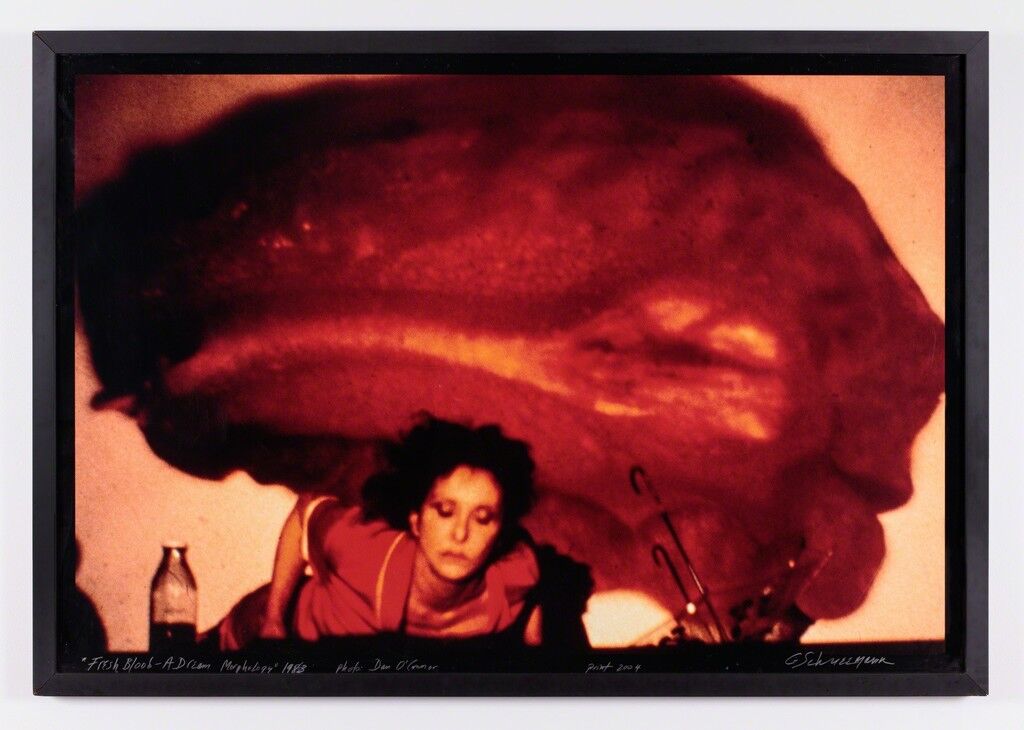 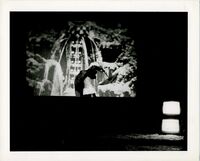 7 Images
View Slideshow
“In this work, there’s explicit genital imagery that’s combined with physiological images, sacred images, and images from nature,” Schneemann points out, as our conversation turns back to Fresh Blood - A Dream Morphology. The project, which will be on view at P.P.O.W, has taken the form of a lecture about taboos accompanied by a dynamic, pulsating video projection. Its goal is to emphasize female sexual pleasure as normative, as opposed to secret, shunned, or second-rate—the go-to responses to female eroticism in the early 1980s, when Schneemann began the piece. “It’s part of my sustained attempt to demystify the female genital experience, acknowledge it as something various, positive, and alive, instead of a some dead envelope to be torn apart or penetrated.”
Schneemann has been grappling with Trump’s perspective, and those similar to it, which homogenize and objectify women, since her youth in rural Pennsylvania. “When I was young, living in the country, the biggest compliment I could get was a boy saying, ‘When we grow up, will you breed my babies?’” Schneemann recalls. “I think that idea—that women have the power to procreate—still underlies the need to control and possess by male culture.”
It was in the 1960s, when Schneemann found herself ensconced in New York’s male-dominated avant-garde scene, that her frustration with this brand of deep-seated sexism was converted into art. By that time, she had left Pennsylvania and the traditional path her father had arranged for her. “My wonderful father refused to send me to college for art; he was afraid that I wouldn’t be a normal girl. And I wasn’t, I got lucky,” she laughs. Yet even though downtown Manhattan was rife with creative experimentation and the burgeoning organization of feminism, Schneemann didn’t feel particularly accepted there either. Some of her most pioneering works, like Meat Joy (1964)—using her naked body in lieu of the “phallic” brush that “belonged to
abstract expressionist
male endeavor,” she’s explained—were originally maligned by ardent feminists and big-name galleries alike, who were both, for different reasons, uncomfortable with her use of eroticism. 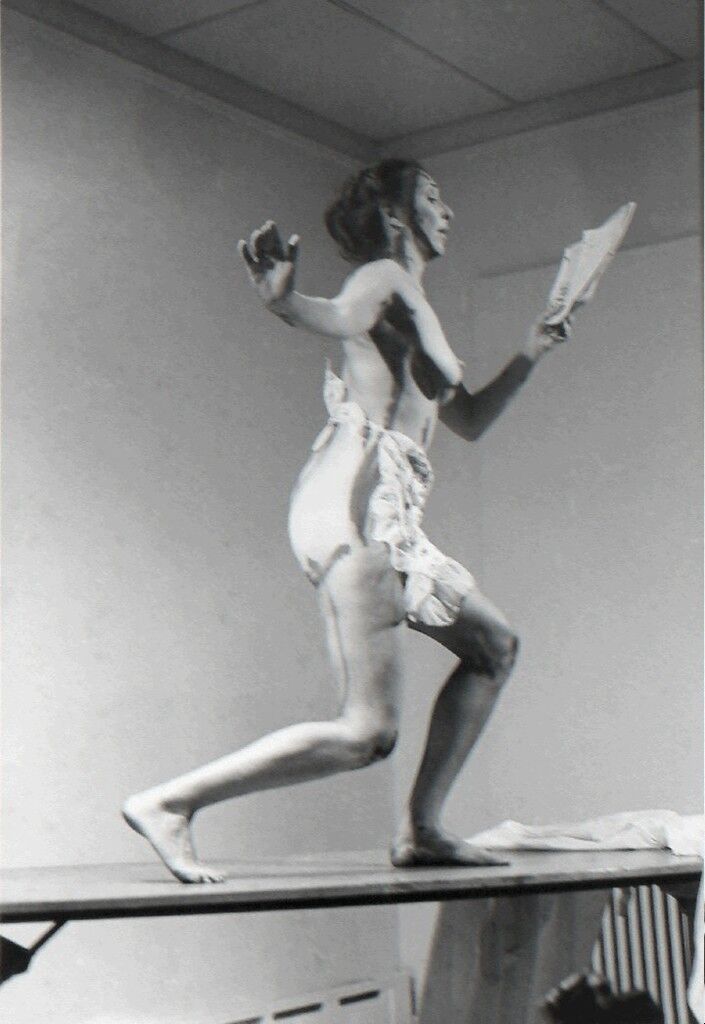 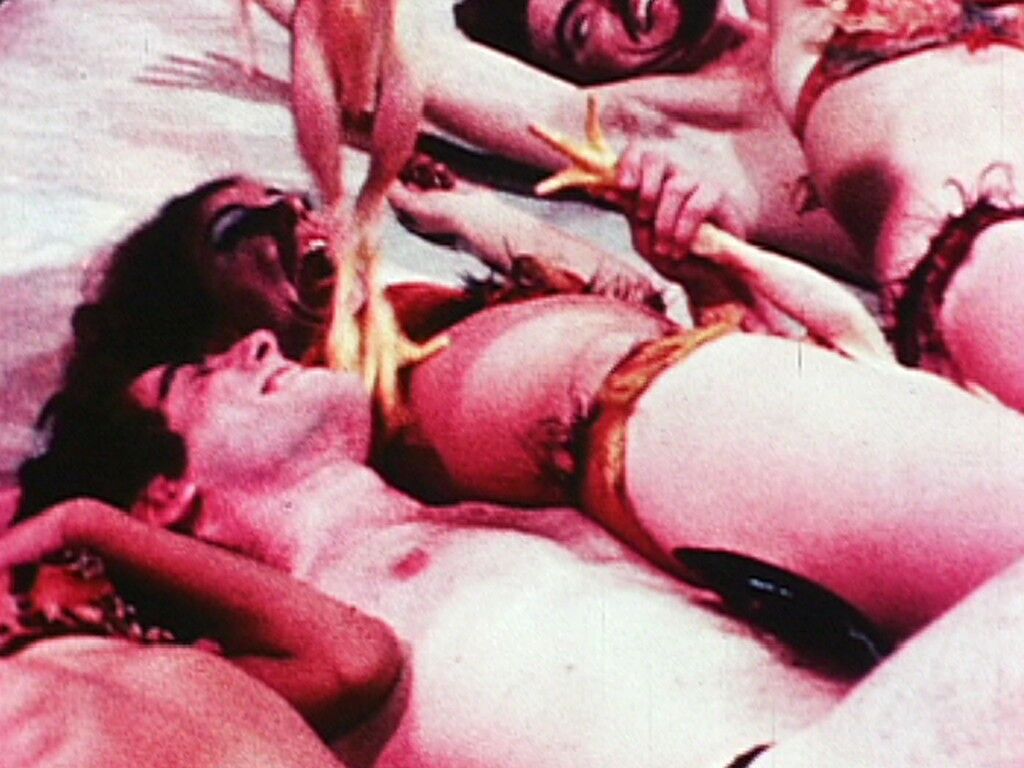 Carolee Schneemann
Meat Joy, 1964-2010
Cantor Fitzgerald Gallery, Haverford College
Advertisement
“Any of my work that had heterosexual or erotic-positive content was despised by traditional critical feminists,” Schneemann explains, nodding to an era in which radical feminists largely disapproved of any imagery that might be misconstrued as porn, or invite the male gaze, no matter what its message. “I was subject to exclusions and very harsh critical reactions... Until a few years ago, my work was rejected by almost every gallery that you can name that was forward-thinking in New York City, too,” she notes. “Castelli, Sonnabend, you name it. They said my work was ‘messy,’ ‘not their cup of tea,’ they ‘didn’t know what I was after.’” She was told her works were too close to what
Joseph Cornell
and
Robert Rauschenberg
were doing, among many other criticisms, like, “If you want to run around naked, run around naked but don’t say you’re painting. This isn’t really feminism, it’s some hypnotic erotic,” she recalls. “I got every weird thing.”
But Schneemann forged on, and the art world has begun to come around. Meat Joy and Interior Scroll (1975), a work in which Schneemann read a scroll inscribed with feminist texts as she pulled it out of her vagina, have entered into the feminist canon, and likewise into a slew of art history books. But, as Schneemann will tell you, the hubbub (whether negative or positive) around the pieces that featured her nude body has eclipsed other large and important aspects of her output. The exhibitions at P.P.O.W and Lelong will give these lesser-known facets a shiny new Chelsea soapbox—one that’s long overdue.
“The projects in which I used my body in the ’60s and ’70s have distracted from the more concentrated, complex work that I’ve developed since then, over the past 25 years—work that has a political dimensionality that reframes the body in a different way than what I’ve become known for,” Schneemann says of her more recent video montages and installations, which involve political content and pioneering use of projection and technology integration. “P.P.O.W and Lelong recognized this, which was lovely because then I was able to resurface works that had been neglected and that we all considered to be consequential.”
The works that will be shown across both galleries span Schneemann’s output from the early ’80s to today. And they indeed embed the body—and the female body in particular—into visceral political discourse related to violence, sickness, catastrophe, and confinement. In one 2006 two-channel video, footage of “political disasters” and “ambiguous menace,” as Schneemann describes, are juxtaposed with “evanescent, fragile” domestic scenarios. Fleeting moments from the Siege of Sarajevo and roaring planes feature in unlikely pairings with images of suckling newborns and couples embracing, drawing attention to individual, human life forces sustaining themselves in the face of pervasive violence. “This is the odd dichotomy we’re surrounded by,” Schneemann explains. “On one side, complete militarism, irrationality, insanity—just look at our current daily politics. Then on the other, how we sustain ourselves by quotidian tasks like cleaning the refrigerator and making love.” 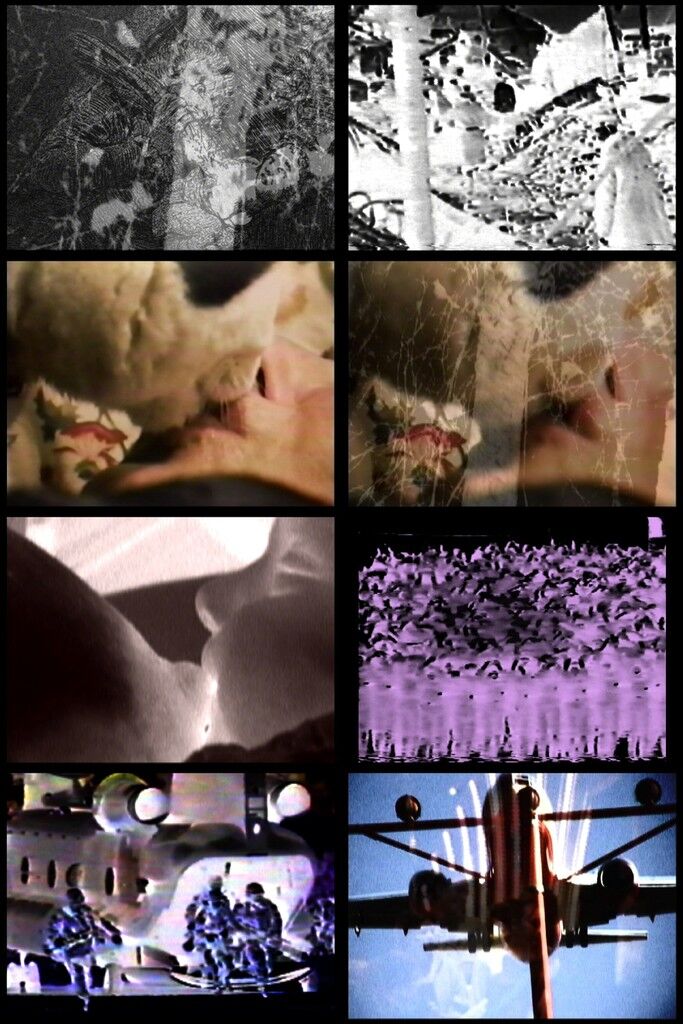 Carolee Schneemann
Devour/Goya, 2006
Galerie Lelong
While not every work included in “Further Evidence” is directly related to the female body, the shows collectively forge a through line between it and the violence it’s endured. “Emphasizing erotic and heterosexual pleasure has always been a theme of my work, but I also have to look at that in the context of militarism, rape, murder, abandonment, the endless violence against suppressed elements of our culture,” Schneemann explains, as the conversation meanders back to the current election and its Republican hopeful. “We’re up against a very deep cultural tradition in which male dominance, greed, paranoia, self-justification seems to be irrepressible. It has no nuance, that’s why it’s so frightening right now.”
For her part, Schneemann will continue to make an emphatic and convincing case against sexism and the marginalization of minorities—one that draws disquieting connections between past and present to reveal how much work still needs to be done.
—Alexxa Gotthardt
Related Stories 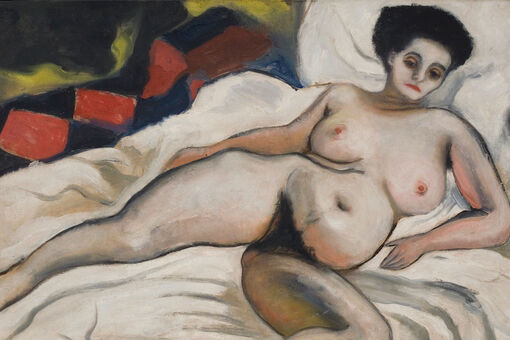