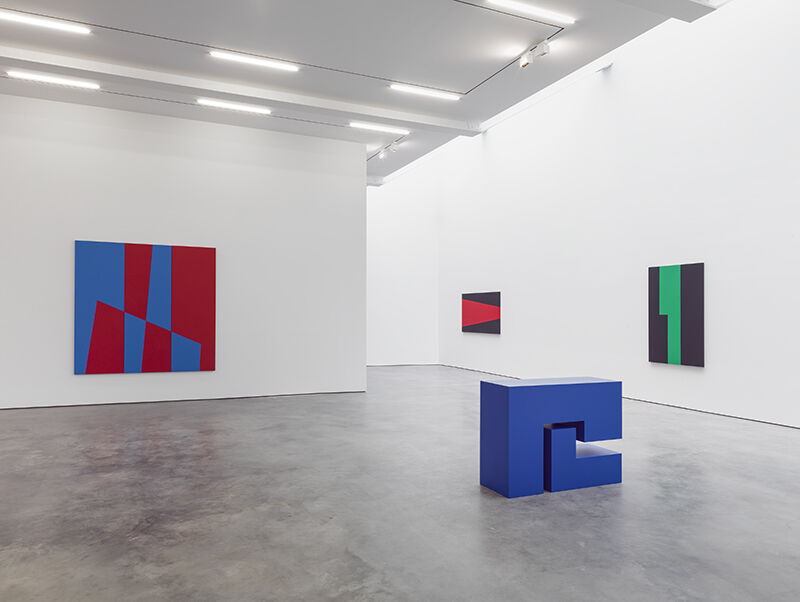 Today, London and Milan’s Lisson Gallery inaugurates its New York space with a highly anticipated show of
Herrera
’s paintings from the last two years. Ever since Lisson broke news of the exhibition in February (a prelude to her September solo show at the Whitney), the buzz around the artist has been mounting. We’ve been reminded that Herrera was born in Cuba in 1915 and is still going strong in the month of her 101st birthday; didn’t sell a work until 2004; ran in the circles of Josef Albers, Jean Arp, and Sonia Delaunay in Paris, and Barnett Newman in New York; and that despite the fact that she’s been a practicing artist in New York for more than half a century, tirelessly refining her bold geometric style, she’s only been recognized in a big, international, art-world way during the last decade. While it’s easy to get caught up in her fascinatingly unconventional narrative, take one step into Herrera’s Lisson show and the chatter falls away.
As I enter Lisson’s airy white cube on 24th Street, the 13 paintings (and one sculpture) inside are antidotes to an overcast Monday morning. The two-toned, hard-edged paintings jumping off of the white walls bear proud shocks of color—electric orange and kelly green, lemon yellow and black, cornflower blue and white among them. Certain works elicit a feeling of comfort, akin to seeing the colors of a favorite sports team or an alma mater. 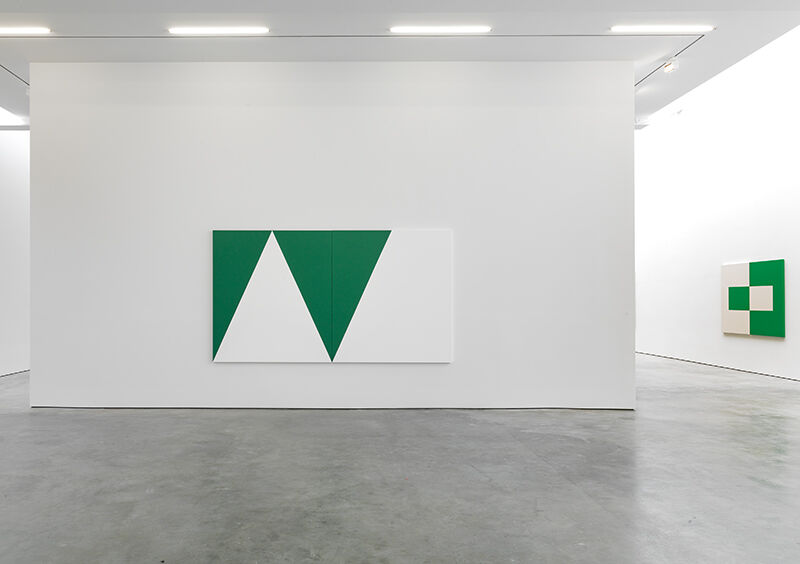 The first work I see is Alpes (2015), a snow white rectangle cut by two deep green triangles. Like much of Herrera’s work, the painting confounds ideas of figure and ground, or background and foreground. She offers multiple ways of seeing the interlocking forms; someone else might see the green first, between mountains of white.
And while there’s something exceedingly enticing about Herrera’s crisp contrasts between colors, equally vital are her singular compositions. As Robert Storr points out in the exhibition catalogue essay, “The invigorating, one can even say suspenseful, essence of these works is their fundamental instability.” From rectangles filled with asymmetrical, alternating stripes, to a six-sided canvas checkered with red and white, to diptychs and triptychs that repeat patterns or conjoin to form a single symmetrical motif—it’s impossible to know what the artist might do next. A surprising, powerful sculpture made from intertwining blocks of aluminum, Untitled Estructura (Blue) (1962/2015), only adds to the mix. But even so, each work feels connected, fundamentally related, like members of a family.

Advertisement
Beginning with small maquettes in which she calculates her compositions and color palettes, Herrera neatly executes these paintings with an assistant through a method using tape and paint rollers. Though from afar, the works appear to be superhuman, machine-made feats, up close tiny traces of the artist’s hand are visible—faint pencil markings and miniscule beads of color that seeped beyond their boundaries. These slight imperfections are quiet reminders of the artist herself, and windows into her fastidious process.
In the foreword to the exhibition catalogue, Lisson founder Nicholas Logsdail recounts the experience of discovering Herrera’s work in 2009: “I couldn’t be sure whether or not I had seen these works somewhere before,” he writes. This sense of familiarity may be felt by many. Herrera distills painting to its purest elements—line, form, and color—in a way that feels familiar, but at the same time new. Much in the way that her career as an artist escapes any sense of convention, she escapes clean art-historical categorization. Herrera challenges western art-world conceptions in a way that is welcome, and needed.
Casey Lesser is Artsy’s Lead Editor, Contemporary Art and Creativity.
Carmen Herrera is on view at Lisson Gallery, New York, May 3–June 11, 2016.
Related Stories