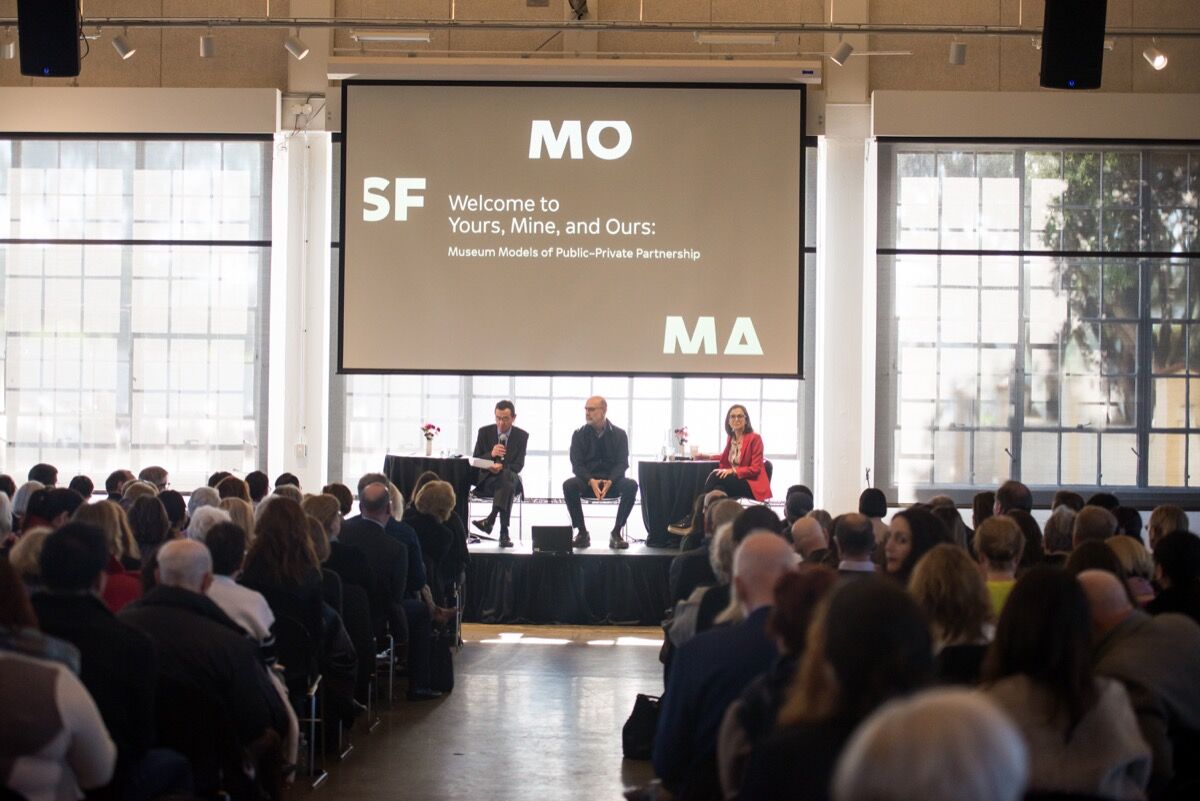 Neal Benezra, Robert Fisher, and Sarah Thornton at “Yours, Mine, and Ours.” Photo by Beth LaBerge, courtesy of SFMOMA.

With an incoming presidential cabinet threatening to slash public spending in the U.S., placing additional strain on institutions, one might well ask: How will the next generation of museums be funded? What changes in museum funding models are already taking place, both in the U.S. and elsewhere?
This past weekend, as the San Francisco art scene found itself in the international spotlight—with the first SF iteration of the UNTITLED art fair coinciding with the annual FOG fair—SFMOMA packed Gallery 308 at the Fort Mason Center for Arts and Culture to capacity with the all-day symposium “Yours, Mine, and Ours: Museum Models of Public-Private Partnership,” featuring panels composed of major museum leaders, curators, and collectors.
SFMOMA’s expressed catalyst for the symposium (and the topic of the first session) was its own partnership with the Fisher Art Foundation, which has ensured a long-term loan of 1100+ works in their collection to the museum. This loan, it is now well-known, is based on several conditions: the works are to be housed for at least a century in a public wing of the museum that the Fishers helped to fund; the museum must organize a monographic exhibition schedule of works from the collection; and a minimum percentage of Fisher pieces are to be displayed in the wing at all times.
While the profound generosity of the Fishers should not be minimized, some eyebrows have been raised at this unconventional arrangement, especially given what some perceive to be a problematic lack of diversity in the Fisher collection. But the question of diversity is only one of many that might arise through relationships between private collections and institutions with a public mission. The symposium did not shy away from such difficult questions as it contextualized current iterations of these partnerships within the history of public museums, which have long depended on the donations and loans of private collectors.
One session addressed this tension through a conversation between two directors of public museums and one director of a private museum—Agustín Arteaga of the Dallas Museum of Art, Max Hollein of the Fine Arts Museums of San Francisco, and Joanne Heyler of The Broad in L.A. Though a singular answer to the question remained elusive, the discussion surfaced the history of public-private models in the U.S., particularly the way that the American system has increasingly encouraged large donations through tax breaks at museums like the Guggenheim, where private collections expanded to become major public institutions.
For Hollein, the ever-expanding nature of museums this side of the Atlantic might itself offer a distinctly American model, in contrast to European institutions whose growth is limited by the state-funded model—though London’s Tate Modern, which just underwent considerable expansion, offers an exception to that general rule. Richard Armstrong, Frances Morris, Manuel Borja-Villel, and Dominic Willsdon at Yours, Mine, and Ours. Photo by Beth LaBerge, courtesy of SFMOMA.

While the Dallas Museum of Art belongs to the city, and the Fine Arts Museums of San Francisco are comprised of public art institutions with explicit public missions, The Broad, as moderator Dominic Willsdon pointed out, is an example of a growing trend in the United States: the single-donor private museum. Willsdon cited the statistic that 80 percent of all single-family museums were created in the 21st century. Perhaps we ought to consider the individual donor model as the salient feature of the contemporary American museum, then.
Heyler cited the financial and professional stability of The Broad as strengths of this model, and suggested that the main difference between it and “what’s called a public museum” is that the collectors are still alive. This comment created palpable tension in the room as others noted that the development of a private museum is entirely dependent on the founder’s collecting vision. Several comments about what a private institution really adds to a developed museum ecosystem in a major art center seemed directed at The Broad.
Arteaga also pointed out that one major issue related to the public-private museum model is that of representation, asking, “Do we really have representation of all 50 states at art museums? Are museums actually serving their constituents?” The responsibility for the “representation of plurality, the diversity of the public” is at stake, he said. Hollein echoed this point, observing that a state-funded model in a country like Germany (Hollein previously served as the director of Schirn Kunsthalle in Frankfurt) “creates a very dense infrastructure also in areas where no wealth is being accumulated.”
So what might the future funding of public museums look like? The last session of the day, devoted explicitly to the future of museum audiences, featured a conversation among Tate Modern director Frances Morris, Guggenheim director Richard Armstrong, and Manuel Borja-Villel, director of Museo Nacional Centro de Arte Reina Sofía in Madrid. The panel attempted to push past a concept of the public itself as either a ticket-buying audience or something “government-owned.” Borja-Villel described how, over the last few years, he and others at the the Reina Sofía have been questioning this idea of the public “and its confusion with the consumer, or with the national.”
For Morris, the best approach to thinking about one’s audience is to evoke the museum experience as akin to visiting a park or other public space. Public museums offer “a civic space full of things and experiences” that can be experienced in “either public or private terms.” And given that communities are not homogenous, Morris argued passionately that museums need to accommodate criticism as well as consensus. “If you open yourself up as an open or civic space, where ideas are protested whether you like them or not,” she said, the museum becomes “a blank canvas for the public to act on.”
In the face of ever-shrinking public spaces, all members of the panel cited the growing role of the museum as a commons. Borja-Villel emphasized that just as there is not one public, but multiple minorities, the museum ecosystem must support smaller museums in precarious positions, with “collaborations that are not just between equals in scale.” 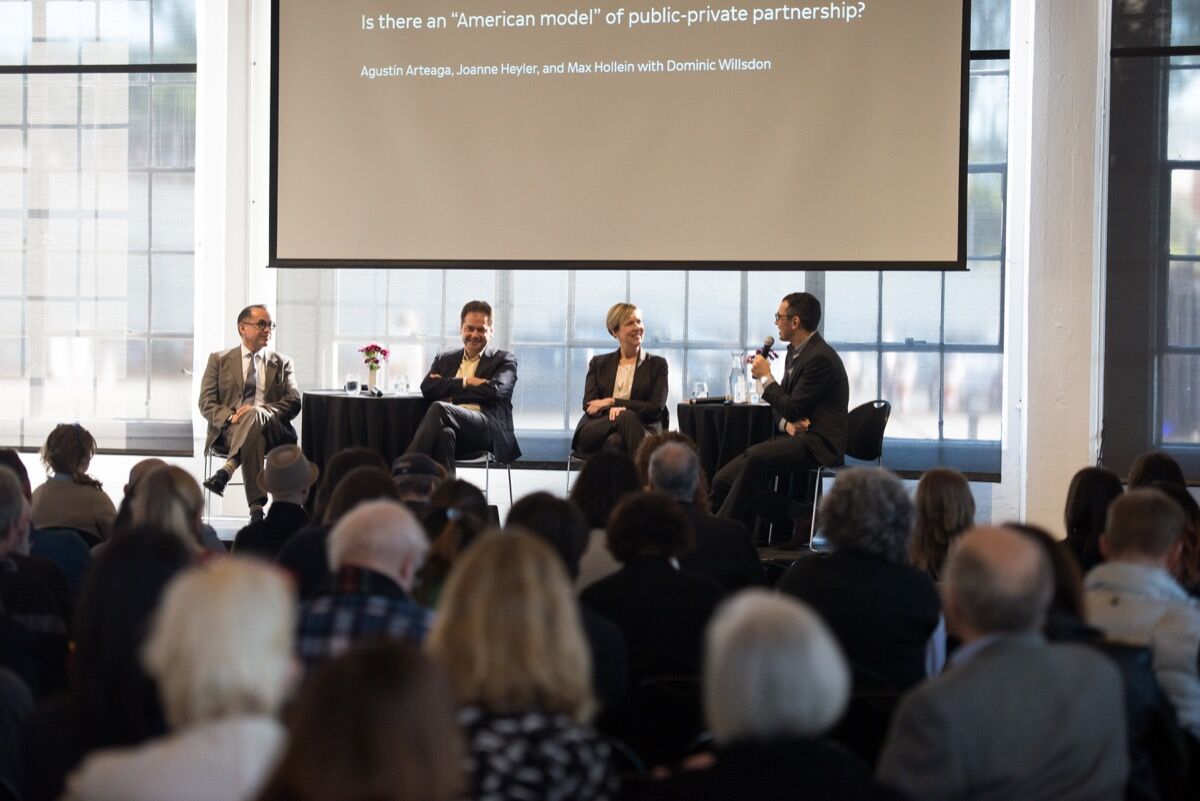 Agustin Arteaga, Max Hollein, Joanne Heyler, and Dominic Willsdon at “Yours, Mine, and Ours.” Photo by Beth LaBerge, courtesy of SFMOMA.

Advertisement
The theme of autonomy as a means of cultivating the conditions for museums to provide public good came up several times. Morris, for example, emphasized the importance of “a gap between those who pay and those who decide,” as well as “the difference between what we do and the marketplace.” Yet this autonomy from the market may become increasingly complicated as we see decreasing government support, and museum models around the world resemble those of the U.S. more and more.
Borja-Villel described how, until the crisis in 2009, Spanish museums received up to 95 percent government funding. Since then, radical changes and huge cuts have ushered in a move toward self-funding alongside the demise of a welfare state that “will not come back.” During Morris’s 29-year tenure, the Tate Modern has adapted from a national museum receiving almost 100 percent state funding to only 30 percent state funding, with pressure on the museum to raise the other 70 percent and grow the visitor economy through tourism.
At the same time, Morris cited a period of extraordinary growth and expansion for the Tate, with ever more entrepreneurial, ambitious museum activities. And at the Guggenheim, Armstrong noted that only a tiny fraction of the operating budget is supported by the U.S. government, with most funding coming from corporations and the trustees themselves—a reality that has not curtailed the museum’s own ambitious roster of programs.
Monica Westin
Related Stories