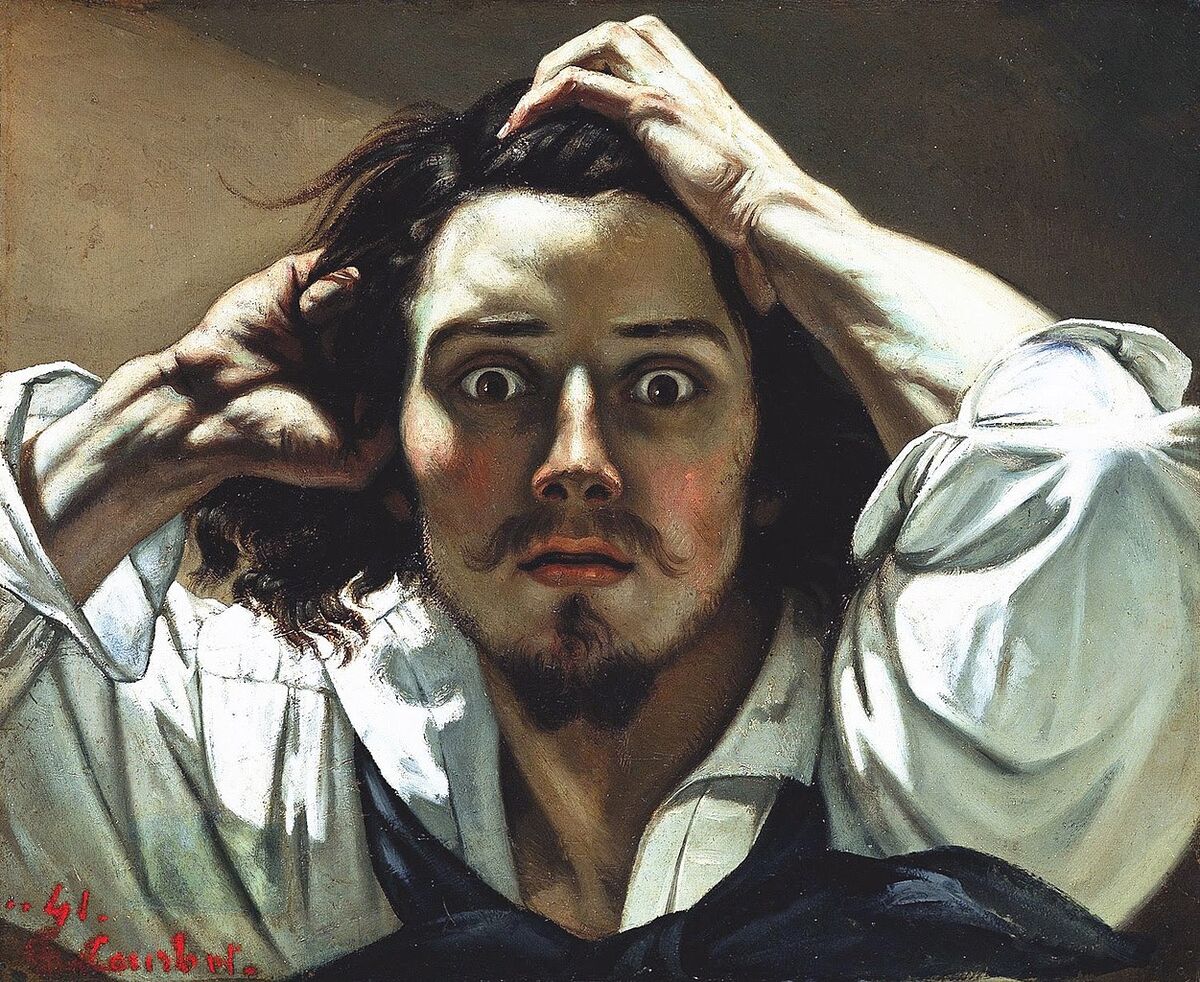 The famously overwrought self-portrait The Desperate Man (1843–45) by the French
Realist
Gustave Courbet
remained in the artist’s studio until his death. In the modestly sized painting, the 24-year-old stares wild-eyed out at the viewer, his hands tearing at his flowing, unkempt hair. In his blousy white shirt and blue smock, Courbet here appears the quintessential
Romantic
artist—a tortured genius struggling for recognition and a bite to eat.
While familiar in this folkloric sense, The Desperate Man contrasts markedly with the public image Courbet had been steadily crafting for himself. Only a few years later, at the Paris salon of 1850–51, he would cause a sensation with confrontational canvases—The Stonebreakers (1849–50, since destroyed) and A Burial at Ornans (1849–50) among them—featuring ordinary people from his native Ornans depicted at a large scale typically reserved for lofty history painting.
The unvarnished realism of these works would establish Courbet as the proponent of a new art, one that reflected life—including the lower classes—as it is. “To know in order to do, that was my idea,” the artist wrote in 1855. “To be in a position to translate the customs, the ideas, the appearance of my time, according to my own estimation; to be not only a painter, but a man as well; in short, to create living art—this is my goal.”

Gustave Courbet
The Burial At Ornans, 1849-1850
Musée d'Orsay, Paris
By the artist’s own token, The Desperate Man should be taken as a literal expression of his lived experience. After all, in 1843, when Courbet undertook this anxious self-portrait, he was a young man without a manifesto, still laboring to build his reputation.
Courbet had moved to Paris when he was 20, in 1839, to pursue a law degree. He quickly defected from this career path, vowing, he wrote, “to lead the life of a savage,” enjoying “the great, independent vagabond life of the Bohemian,” as an artist unencumbered by the state. To that end, Courbet skipped enrollment at the Academy of Fine Arts, training instead in various artists’ studios and spending hours at the Musée du Louvre copying
Old Masters
he admired. He also took in works by the previous generation of French Romantic artists, especially
Théodore Géricault
and
Eugène Delacroix
, who painted contemporary events on a monumental scale.
Despite his enthusiastic drive, Courbet was still searching for his own artistic identity. Yet he found himself growing increasingly disillusioned by the art establishment as he faced repeated rejection from the state-sanctioned salon. Finally, in 1844, the salon accepted his Courbet with a black dog (1842–44), a haughty view of the artist, in black cape and hat, as a resting traveler in a craggy hillside (a trope that repeats in the 1854 work The Encounter [Bonjour, M. Courbet], which art historians Linda Nochlin and T.J. Clark have compared to images of the “Wandering Jew,” a rootless outsider with whom Courbet identified). 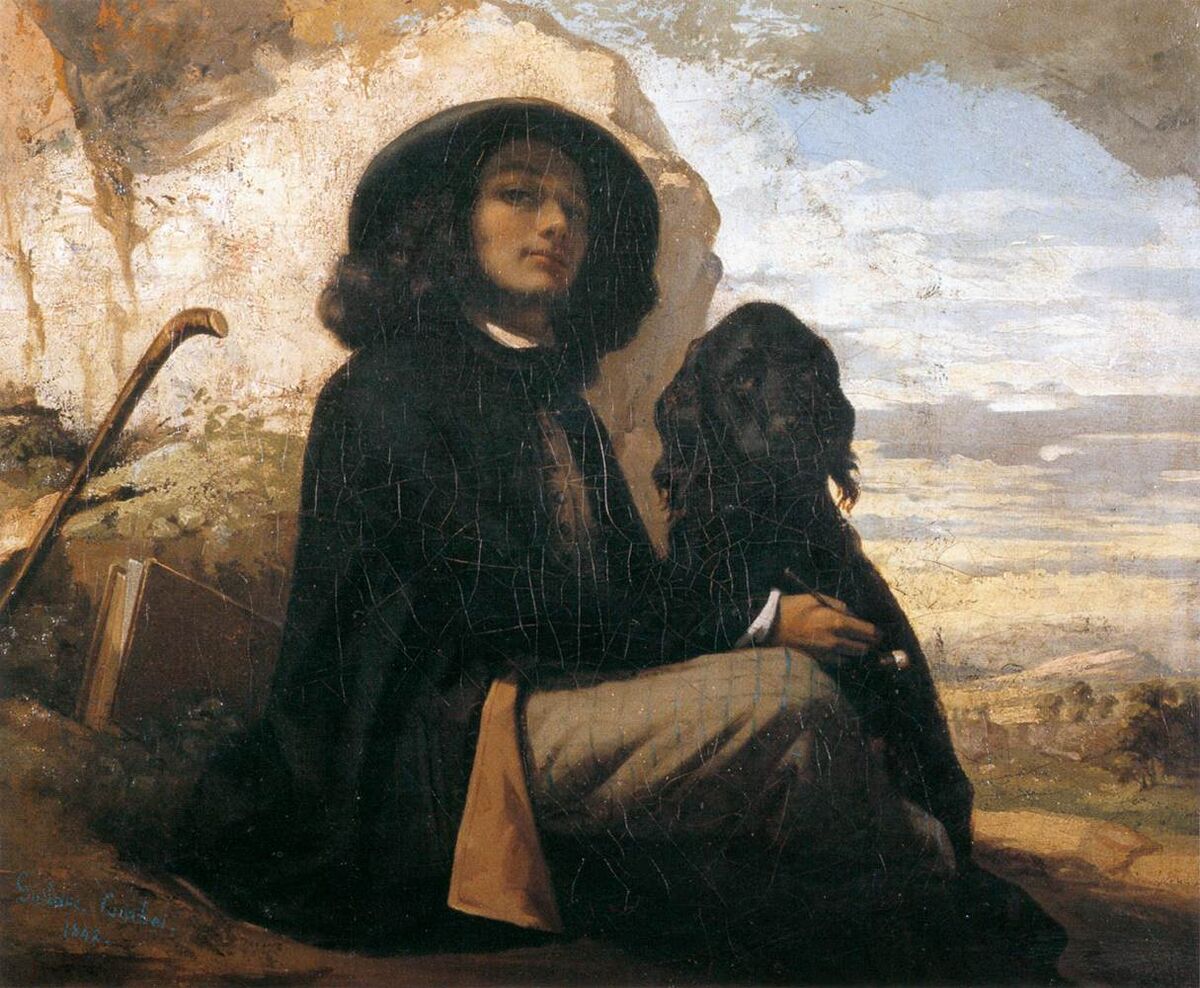 Gustave Courbet, Courbet with a Black Dog, 1942. Image via Wikimedia

Advertisement
Perhaps in a literal bid to insert himself into art history, the ambitious but insecure young artist took to the self-portrait on a number of occasions during this decade. In paintings like The Wounded Man (1844–54), The Man with the Leather Belt (1845–46), and Man with a Pipe (ca. 1848), Courbet appears as a Byronic heartthrob who exudes a vulnerable sexuality, the man Nochlin was talking about when she deemed him “the Mick Jagger of the nineteenth century.”
These other portraits serve only to complicate the identity of the frightened animal who appears in The Desperate Man. Looking back on his early struggles, Courbet once remarked: “How I was made to suffer despair in my youth!” Aside from these early rejections from the salon, Courbet had a pronounced chip on his shoulder stemming from his parochial bourgeois roots, a feeling that would only become more pronounced as he spun farther away from his Romantic ideals and towards a controversial form of
social realism
.
Courbet faced a turning point not long after he completed The Desperate Man, undergoing a political and artistic awakening in 1848, a pivotal year both civically and personally: A democratic revolution in France deposed the monarchy and resulted in the liberal Second Republic, and Karl Marx published his Communist Manifesto. That same year, Courbet moved into a studio on the Left Bank, falling in with the poet
Charles Baudelaire
, art critic Champfleury, and socialist philosopher Pierre-Joseph Proudhon, who encouraged him to create the serious, unidealized depictions of the working classes that would catapult him to notoriety. By the early 1850s, Courbet had acquired the steady support of Alfred Bruyas, a wealthy collector whose patronage allowed him financial freedom. Still, throughout his life, Courbet retained his provocative sense of dissent, and of being an outsider. (As an active socialist, the artist couldn’t resist, for instance, begrudging Bruyas’s upper-class status in works like The Encounter.) 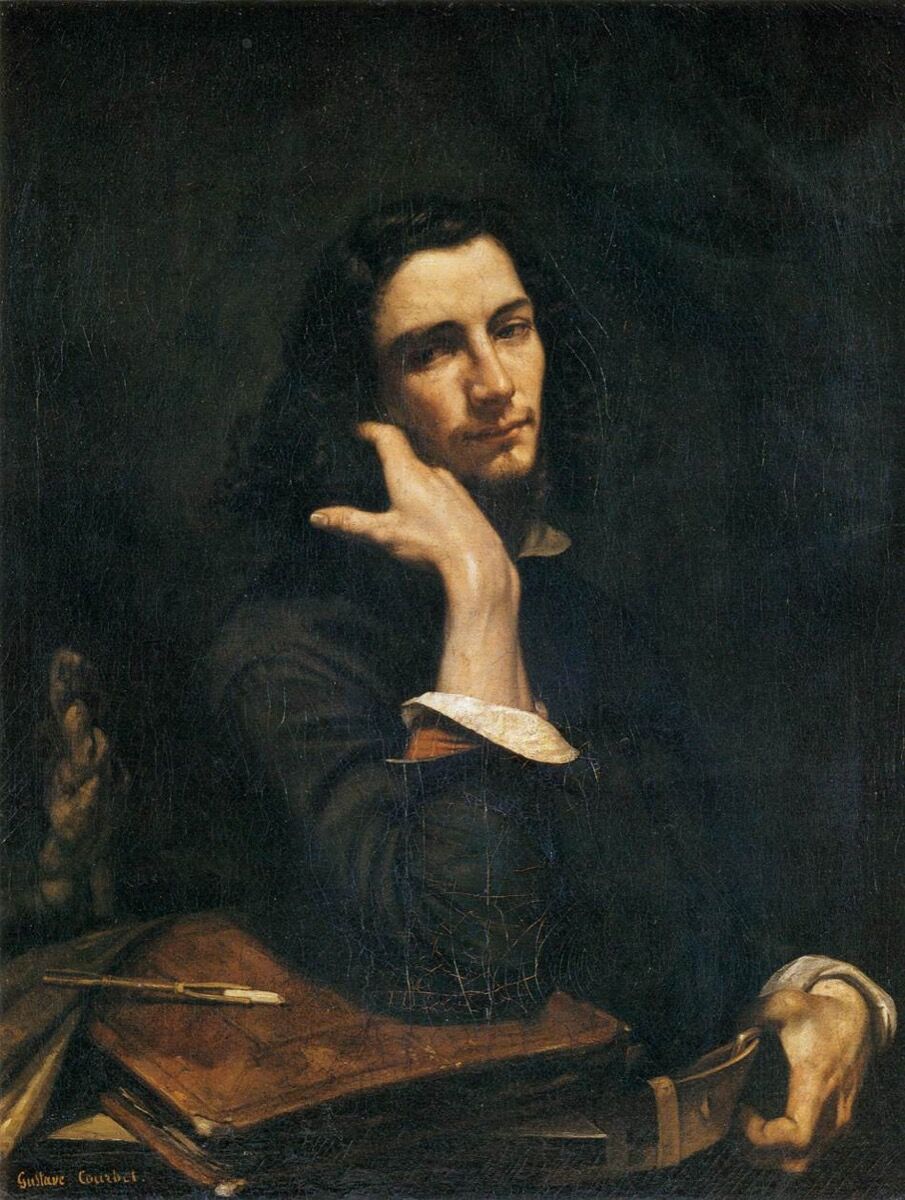 Gustave Courbet, The Man with the Leather Belt, 1945–46. Image via Wikimedia Commons. 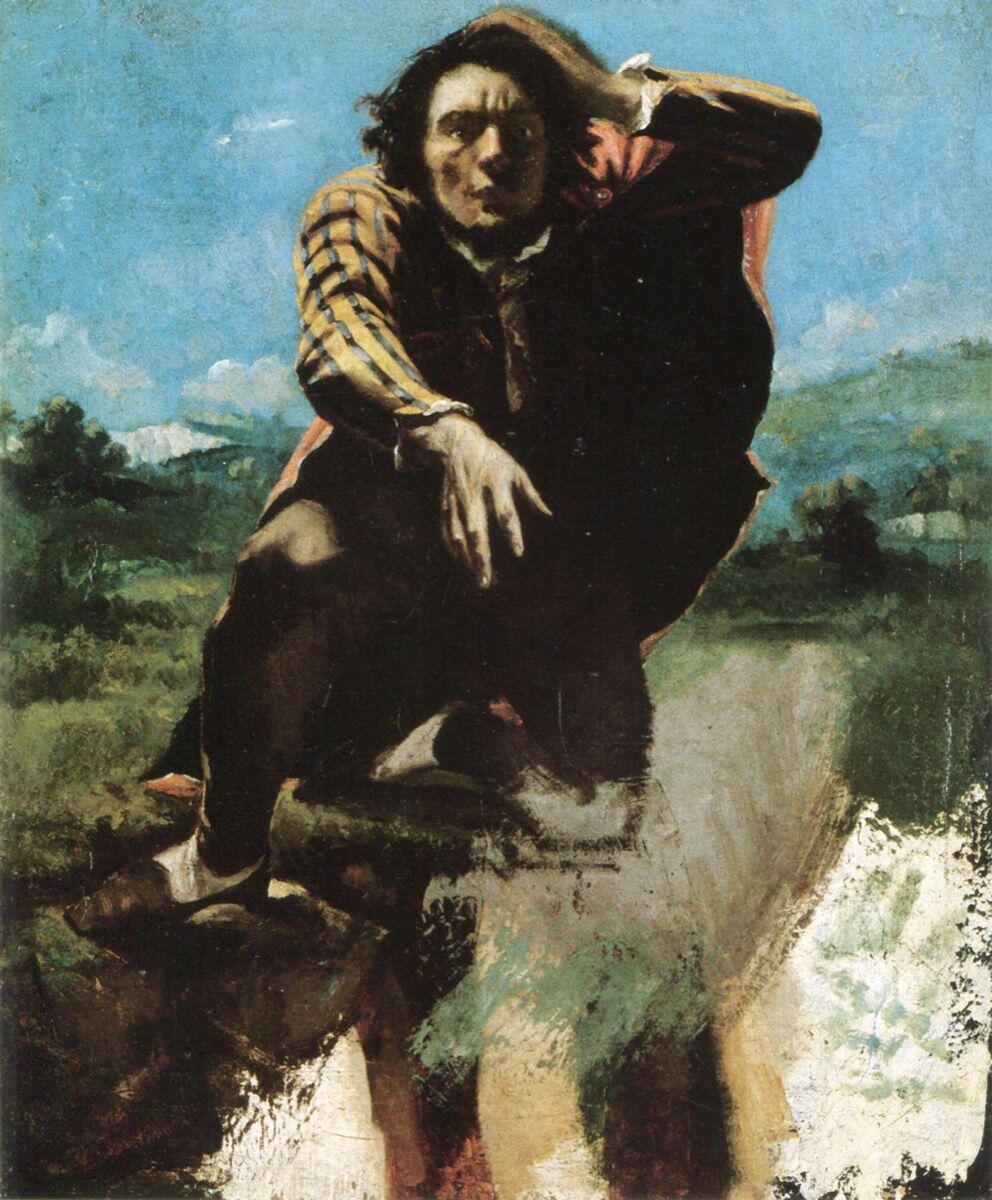 Courbet’s characterization of himself as the “proudest and most arrogant man in France” seems distant from the horrified figure in The Desperate Man. A little-known self-portrait completed around the same time, entitled Man Mad with Fear (ca. 1843), shows the artist with an almost identically wretched expression, but in this scene, he crouches down at the edge of an abyss. Here, the Romantic prospect of the solitary genius is literalized to comical effect, the looming threat of failure exemplified by the ridiculous chasm.
The Desperate Man, therefore, focuses in on a moment of dichotomy in the artist’s life: Just as Courbet began to shed the Romantic tropes of his forebears to attend to a new, modern art, he experienced the now-cliched insecurity of the young artist who stares down his own unknown future. When taken alongside his other self-portraits—and with the fact that it largely remained in his studio during his lifetime—The Desperate Man seems intensely personal and, thus, deeply genuine. In many of his paintings, Courbet was committed to capturing the truth of modern life, or the unwashed masses. But in this picture, he takes off his mask, revealing a much more vulnerable truth about himself.
Julia Fiore
Related Stories

Understanding Eugène Delacroix through 5 of His Most Provocative Artworks

Why Has Géricault’s Raft of the Medusa Inspired So Many Contemporary Artists? 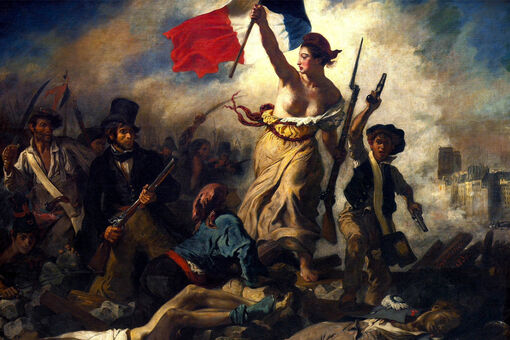 Understanding Eugène Delacroix through 5 of His Most Provocative Artworks
Alexxa Gotthardt
Sep 10, 2018 Why Has Géricault’s Raft of the Medusa Inspired So Many Contemporary Artists?
Meredith Mendelsohn
Nov 25, 2015 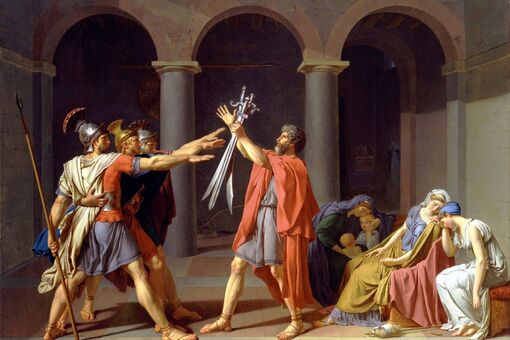