Prolific and Endlessly Experimental, Jay DeFeo Has Become an Icon for Artists 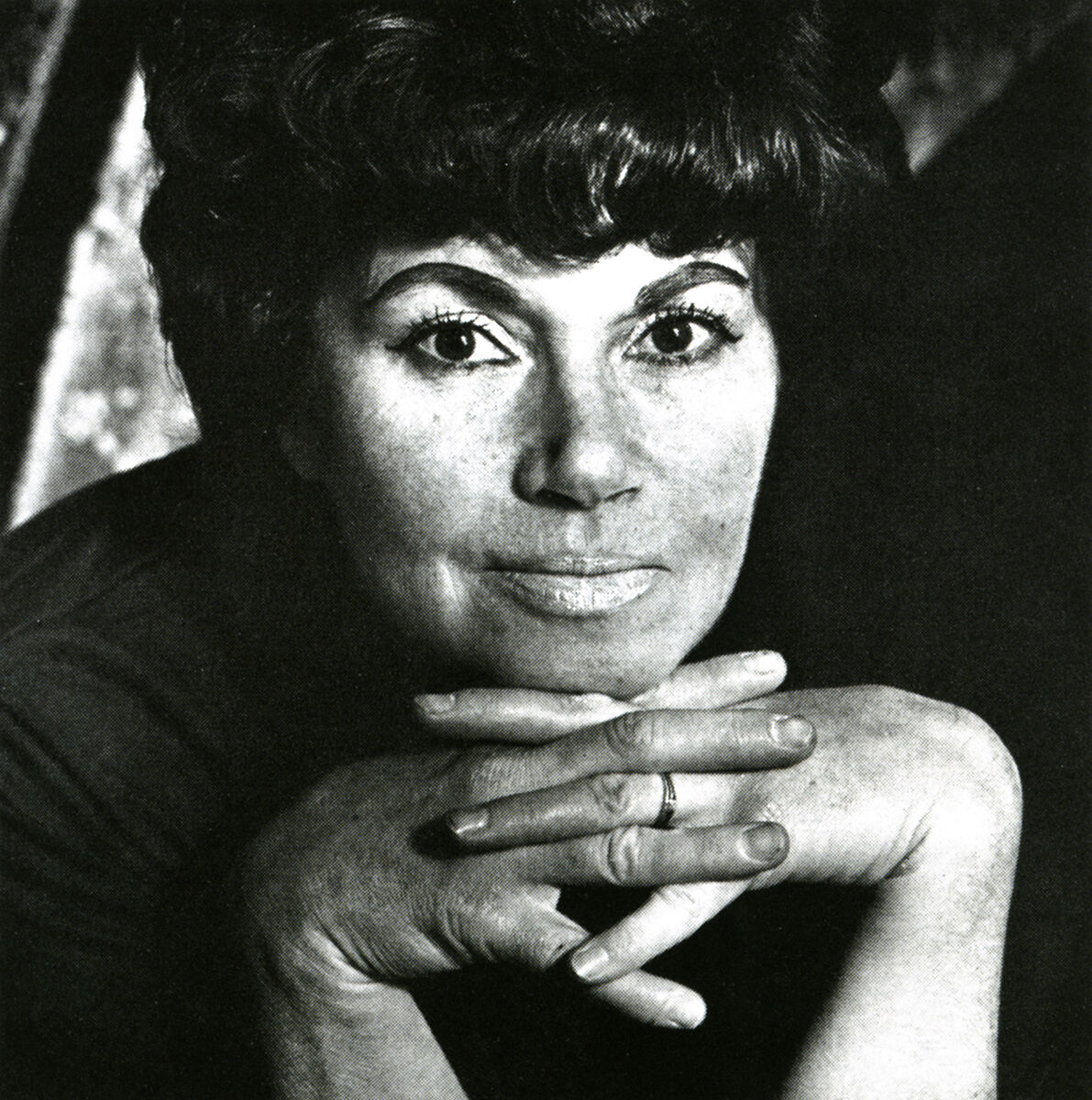 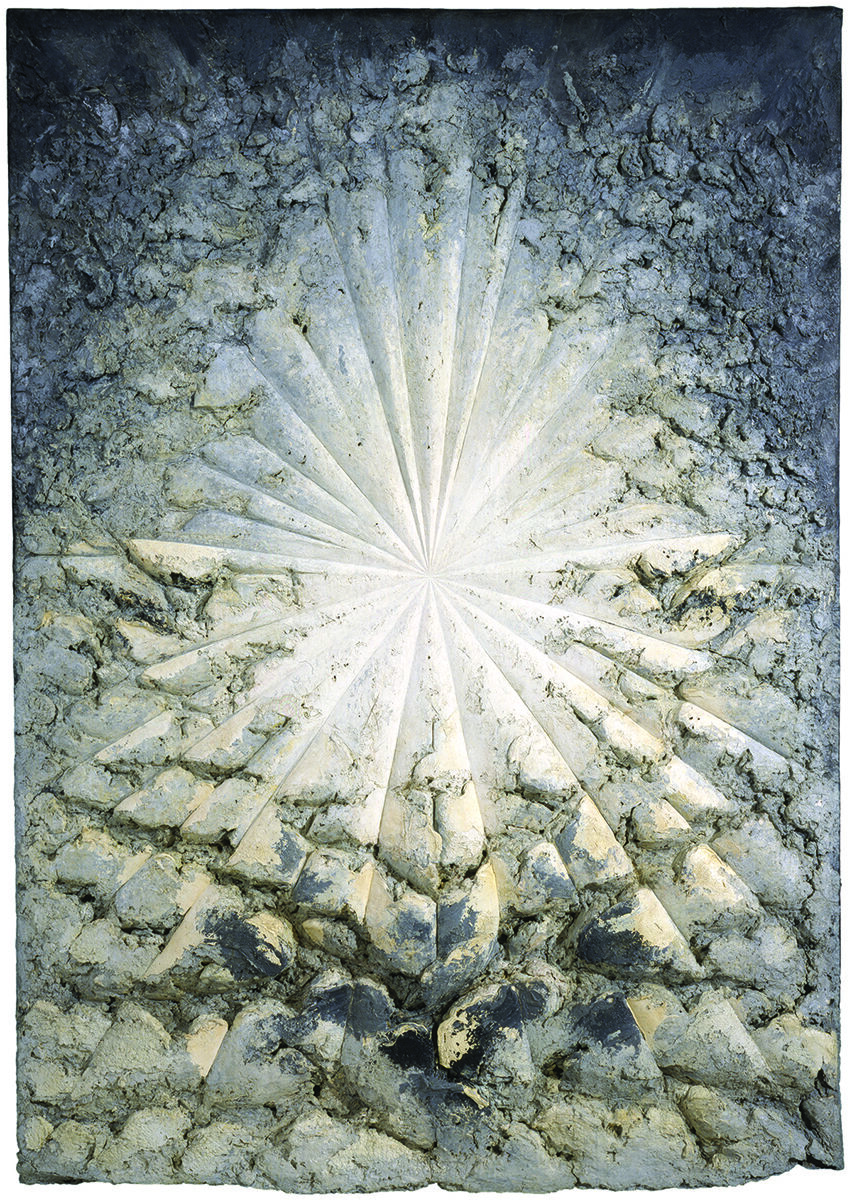 In the career of
Jay DeFeo
, her astonishing painting The Rose (1958–66) casts a long shadow. Spanning almost 11 by eight feet, it has a primordial-looking surface of oil paint mixed with wood and mica so heavily built up and excavated that it weighs more than a ton. This abstract, sculptural canvas, with radiating vectors that converge at a center point, occupied DeFeo for eight years—consuming her entirely for the last five of those. The Rose acquired mythic status when the artist
Bruce Conner
, her close friend, filmed it being cut out of the window of DeFeo’s Fillmore Street studio in San Francisco, in 1965, then hoisted by forklift onto a truck, and transported to the Pasadena Art Museum. (The exhibition it was destined for would ultimately be delayed until 1969.)
Yet DeFeo, born in 1929 in New Hampshire and raised in the Bay Area, worked prolifically and experimentally in multiple media both before The Rose—when she was included in MoMA’s landmark 1959 exhibition “Sixteen Americans” alongside
Ellsworth Kelly
,
Jasper Johns
, and
Robert Rauschenberg
—and after, until her death from lung cancer in 1989 at age 60. Two new exhibitions, “Jay DeFeo: The Ripple Effect” on view at Le Consortium in Dijon, France, from February 3rd, and “Outrageous Fortune: Jay DeFeo & Surrealism” at Mitchell-Innes & Nash in New York from March 1st, focus on her lesser-known works from the 1970s and ’80s, many of which, drawn predominantly from the Jay DeFeo Foundation, have never been shown before.
“It’s a period that’s been less studied—after she was done with The Rose, after she left San Francisco, after her marriage [to the artist
Wally Hedrick
] ended and a hiatus of about three years when she really didn’t have a studio and didn’t work,” says Leah Levy, executive director of the Foundation. “After The Rose was actually exhibited in 1969, either coincidentally or very directly, she began to create a new vocabulary, new materials, and a new way of looking at her work.”

DeFeo had been preoccupied with the idea of vision at least since making The Eyes (1958), a monumental seven-foot-long drawing of her own eyes shown wide open—the closest she ever came to a representational self-portrait. (Interestingly, the intersection point in The Rose aligned perfectly with the level of her eyes, evident in 1959 photographs of DeFeo standing naked before the painting in process, her arms and legs extended to mirror its trajectories.) In 1970, while living in Larkspur, California, she used the lens of the camera as a way of “retraining her eye,” writes Dana Miller, curator of the 2013 Jay DeFeo retrospective at the Whitney Museum, in the catalogue for “Outrageous Fortune.” It’s the first show to look at DeFeo’s work specifically through the prism of
Surrealism
.
To be included in the Mitchell-Innes & Nash exhibition are photographs of mannequins and high-heeled shoes—objects that evoke the figure in a way that echoes Surrealists like
Man Ray
. DeFeo also photographed isolated parts of her own body, such as a collection of her extracted teeth that, shot closeup, take on the dimensions of an otherworldly landscape. Just as DeFeo had cut up images from girlie magazines in the 1950s to make pinwheel collages, the artist now played with cutting up her own photographs, responding to a suggestion that Conner had made in 1973. These photo-collages, such as one of an old-fashioned candlestick telephone with a light bulb in place of its receiver, suggest anthropomorphic creatures.
5 Images
View Slideshow 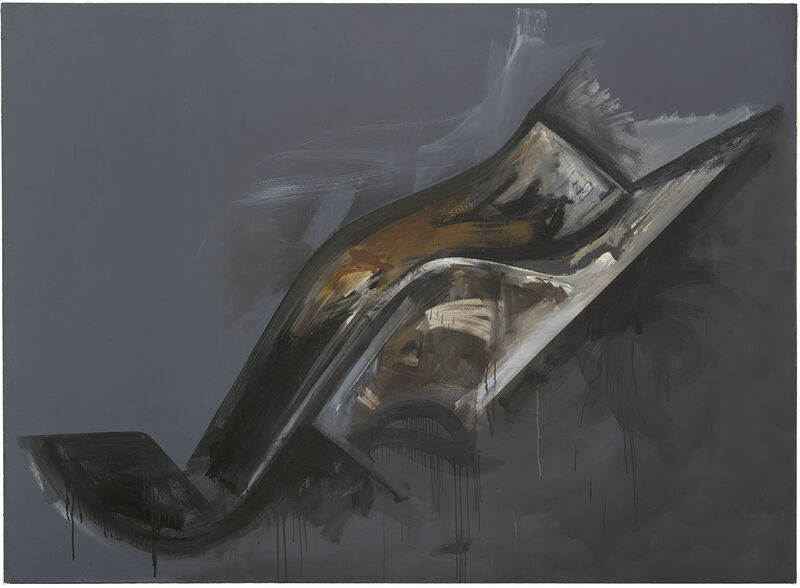 Advertisement
“Interest in the fragmented body is a thread through DeFeo’s work, from the very beginning to the very end,” says Levy. She points to the earliest work in the show, a small 1955 painting of a vase of daisies that can be read as a head and neck. One of the last works in the show, the large 1986 painting Untitled (Reclining Figure), which has never been exhibited, suggests an odalisque. The model was actually the curved arm of a chair in her studio.
Just as DeFeo deferred assigning any specific meaning to The Rose other than its compositional relationship to the way rose petals are formed, she preferred that the subjects in her paintings and drawings remain ambiguous. “These fleeting images truly are like dreams,” the artist once said, adding that she was attempting to “portray the esthetic harmony resulting from the uniting of the geometric and organic forms.”
“The Ripple Effect,” which will travel to the Aspen Art Museum in June after Dijon, is built around four groupings of works based on a looped handle broken off a coffee cup, the leaves of a cabbage plant, a collection of used erasers that DeFeo kneaded into sculptural forms, and a draped tripod that assumes animate characteristics. From each of these models, “DeFeo did works back and forth across media, across scale,” says Levy of these acrylics, photographs, collages, and drawings. “She looked at things from all angles.” 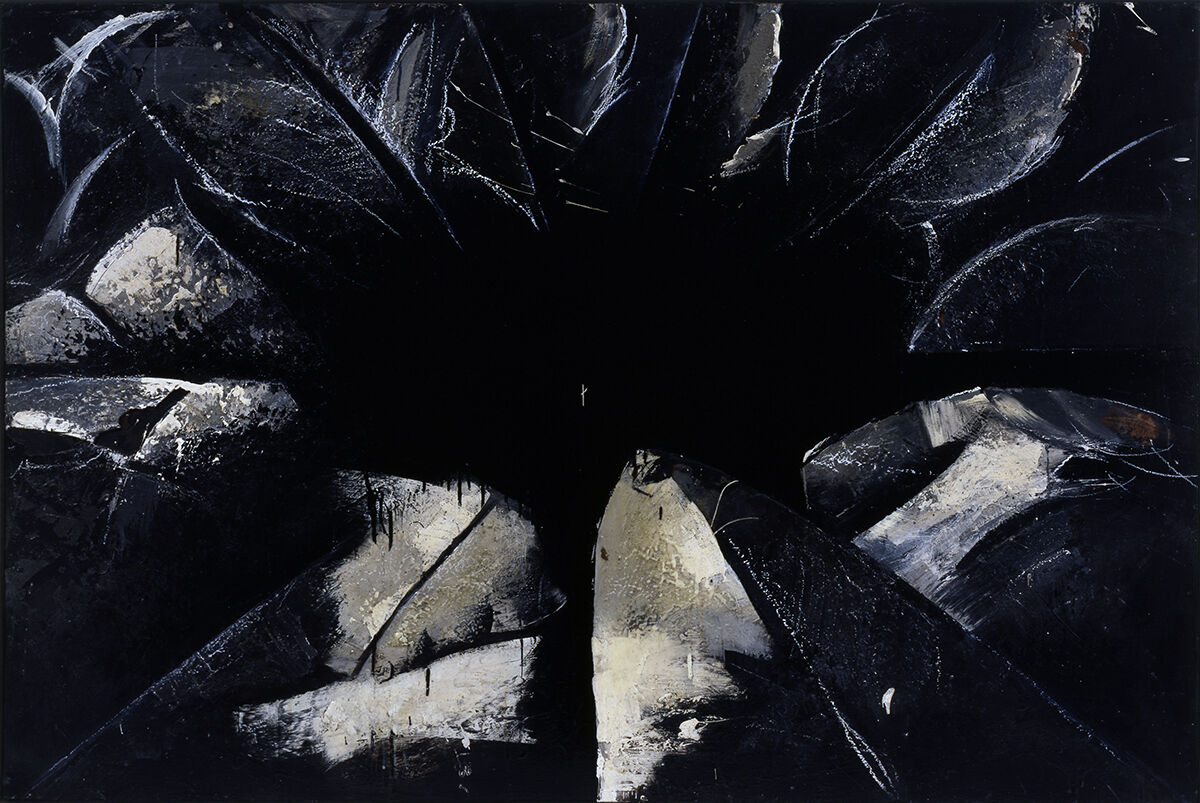 In one such example, DeFeo captured voluptuous cabbage leaves curling outwards from a core, then made multiple experimental prints from the shot at very high contrast. This series of small images became the springboard for Cabbage Rose (1975), a four-by-six-foot acrylic painting on Masonite. With an enigmatic gravitational center, and a dark, existential quality, it hearkens back to The Rose. Another series, modeled on her sculpted eraser remnants and titled “Eternal Triangle,” entirely transcends that humble departure point, appearing as mysterious wedges hovering in indeterminate space.
The exhibition also traces DeFeo’s influence on a younger generation. It intersperses examples of work by 11 contemporary artists who have cited a meaningful connection to the Bay Area artist, including
Trisha Donnelly
,
Sam Falls
,
Rachel Harrison
,
Wyatt Kahn
,
Ron Nagle
,
Gay Outlaw
,
Tobias Pils
,
R.H. Quaytman
,
Ugo Rondinone
,
Bosco Sodi
, and
Oscar Tuazon
.
Rondinone contributes a large, painted wall that suggests resonance with the scale and weight of The Rose. Nagle, a friend and fellow professor of DeFeo’s at Mills College in Oakland, California, shows the tiny pink ceramic cup he made for her 60th birthday, which became the model for her last great series of drawings. (DeFeo completed more than 200 works in that final year of her life.) 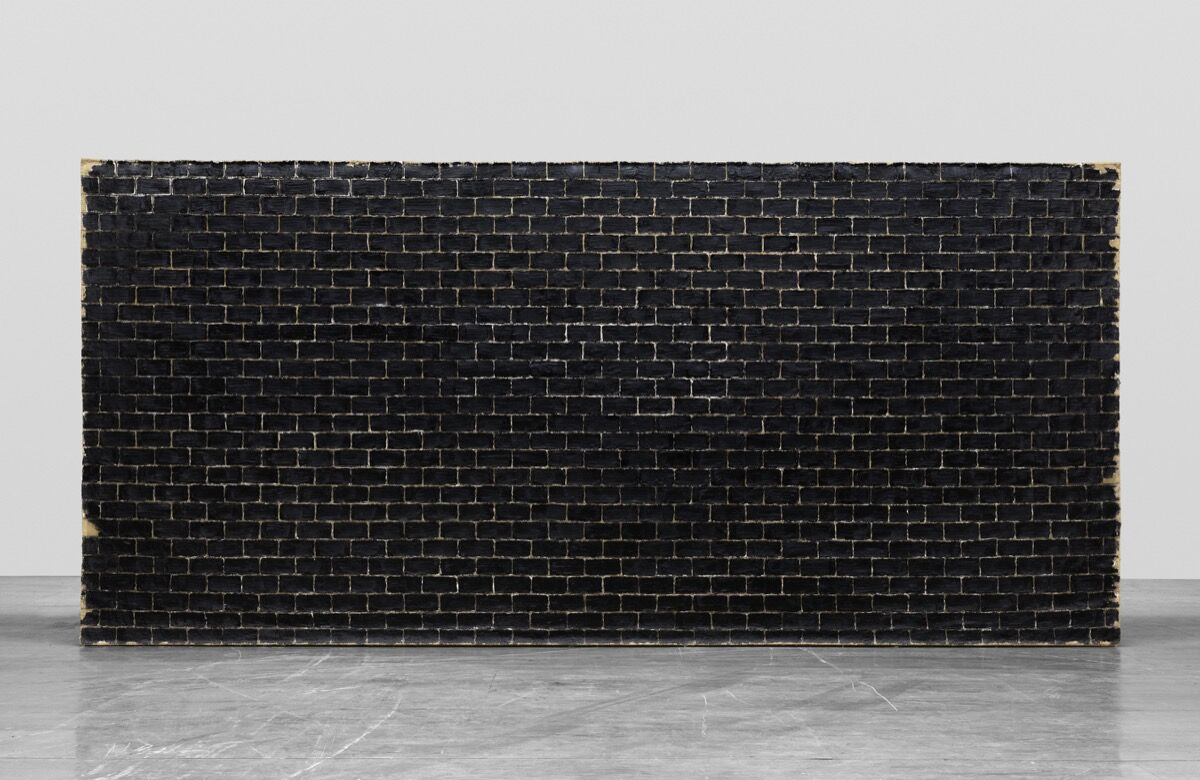 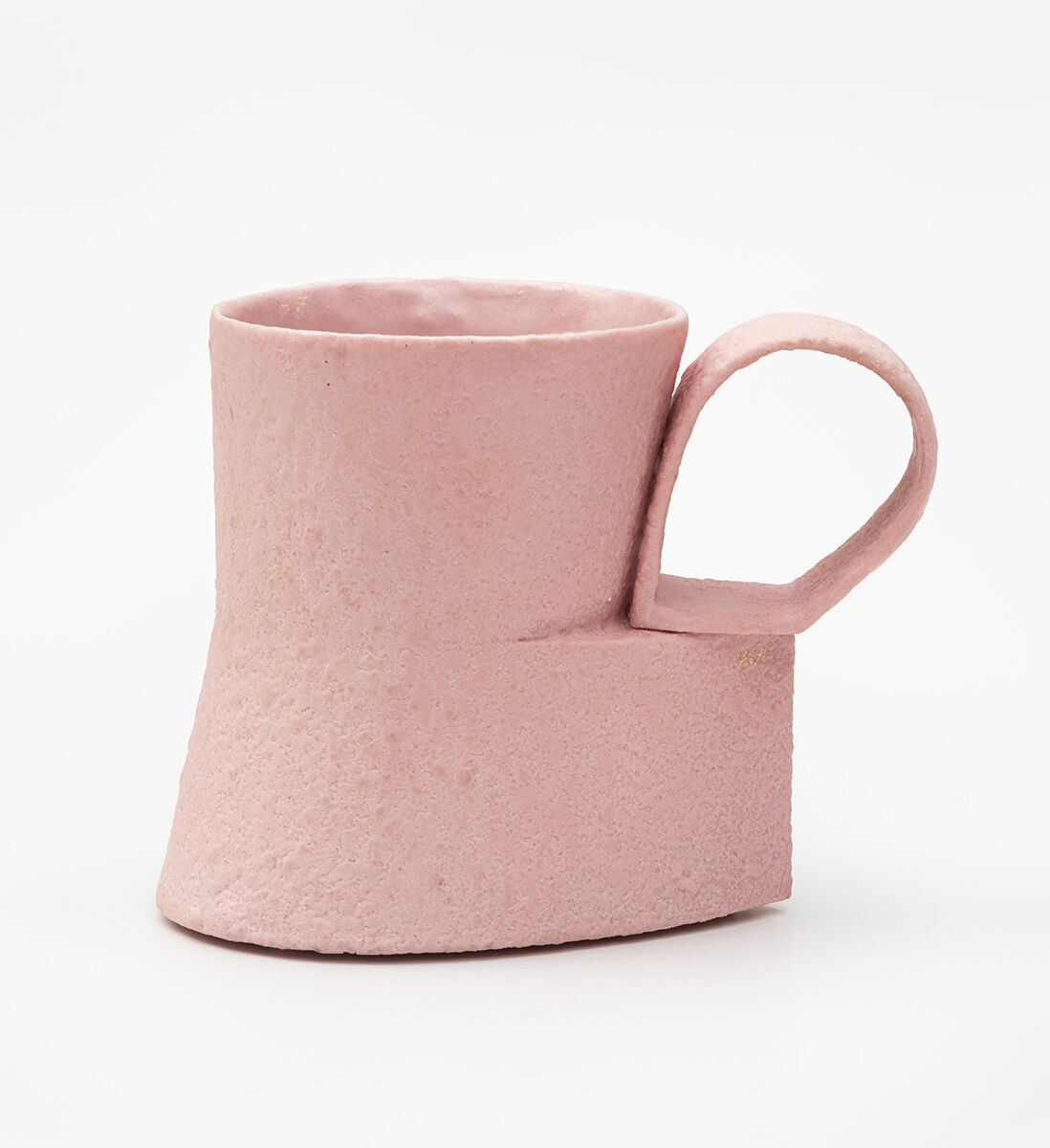 “DeFeo appeals to artists on a formal level, and also in the biographical sense,” said Miller in an interview. “She was an artist who was so independent, who changed her style and her media, and really worked to please herself primarily rather than market forces or anyone else. She was in many cases disregarded for those reasons. I think she is a symbol of artistic integrity for a lot of artists.”
Hilarie M. Sheets
Related Stories

How Helen Frankenthaler Pioneered a New Form of Abstract Expressionism

The Cult Artist Who Demanded Total Freedom, Whatever The Cost
Advertisement
Further reading in Art 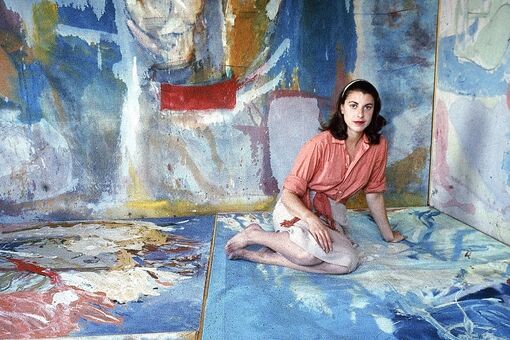 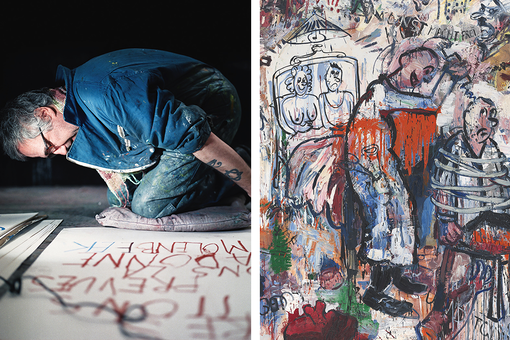 The Cult Artist Who Demanded Total Freedom, Whatever The Cost
Scott Indrisek
Jul 6, 2017