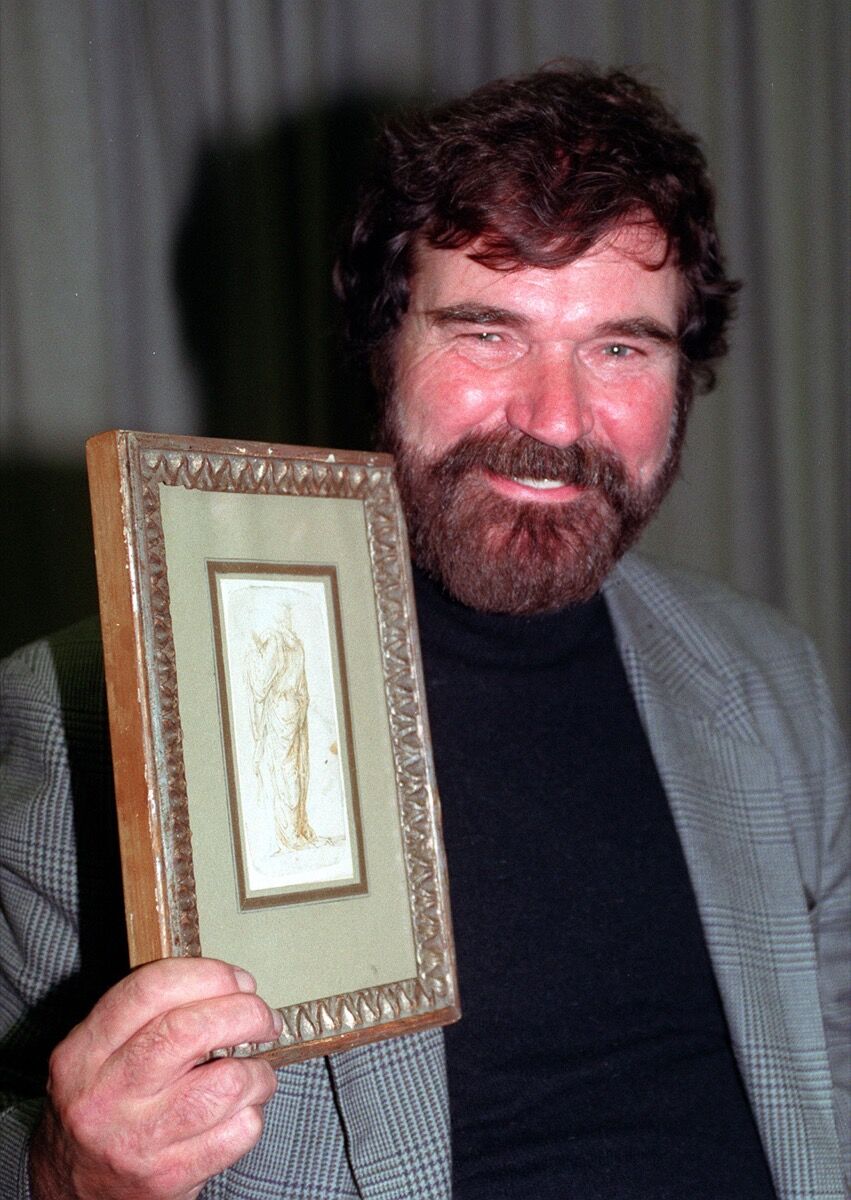 Art dealer Eric Hebborn had a golden rule: He never worked with amateurs. Anyone looking to buy a painting or drawing from his business, Pannini Galleries, needed to be someone who specialized in art, who believed themselves able to tell if a work was a genuine
Brueghel
or
Van Dyck
. And if after they took that artwork home or sold it to another gallery or a museum, it turned out to be a fake, well, that was on them for failing to recognize a forgery.
Hebborn, who died in 1996, is widely considered to be the greatest art forger of modern times. By his own estimate, he created over 1,000 forgeries. Only a handful of these works have been exposed as fakes, in places like the National Gallery of Denmark and the Morgan Library & Museum, after passing through the finest auction houses in the world. Some of the most notable artists Hebborn claimed to have forged, in addition to Brueghel and Van Dyck, include
Giovanni Battista Piranesi
,
Jean-Baptiste-Camille Corot
, and
Peter Paul Rubens
.
“I’m not a crook, I’m just doing what people have always done during the history of the world,” Hebborn said in the 1991 BBC documentary Portrait of a Master Forger. “[Forgeries] should be enjoyed for what they are, rather than being questioned for what they’re not.”

Hebborn’s upbringing combined his astonishing artistic talent with his limitless capacity for mischief. At the age of eight, he was unjustly accused of playing with fire—he said he responded to this allegation by actually setting his school ablaze. He was accepted to the Royal Academy of Arts and even earned the Rome Prize in engraving. He picked up additional skills in imitating the
Old Masters
by working as an art restorer after he graduated.
Hebborn later opened Pannini Galleries with his longtime romantic partner Graham Smith and developed personal and professional relationships with a number of key figures in the London art world, including art dealer Hans Calmann, and Christopher White, a specialist in Old Master drawings at the oldest commercial gallery in the world, Colnaghi. Hebborn famously befriended Anthony Blunt, an art advisor for Queen Elizabeth II who later revealed himself to be a Russian spy (though Hebborn wrote in his memoir that he was unaware of Blunt’s spying activities). The year after he opened the gallery, Hebborn moved to Italy.
Insisting he was not a criminal, Hebborn subscribed to his own moral code. He let experts make their own opinions about his work without input from him, and he would charge similar prices for his Old Master forgeries as he did for the works he made under his own name.
“There is nothing criminal in making a drawing in any style one wishes, nor is there anything criminal about asking an expert what he thinks of it,” Hebborn wrote in his 1991 memoir.
Refusing to be remorseful for his misdeeds, Hebborn believed the art world itself was to blame. He looked down on art experts who claimed to be able to tell whether a work was genuine based on the style, when it’s difficult enough to sniff out a fake using sophisticated scientific analysis. As a master draftsman, he believed the ability to draw was crucial in being able to evaluate a work’s authenticity.

The master forger’s attention to detail proved to be his own undoing. Many of his fakes passed muster due to the fact that he used paper from the time period of the artists he was emulating; he similarly mixed pigments himself from materials that would have been available in earlier eras. Konrad Oberhuber, a curator at the National Gallery of Art in Washington, D.C., noticed two drawings from Colnaghi said to be done by different artists had identical artistic styles and were done on the same type of paper. He then alerted a curator at the Morgan Library & Museum, who noticed similar issues with a drawing there. Colnaghi then issued a statement about concerns over Old Master drawings purchased from Hebborn, though the gallery did not publicly name him.
In a letter to The Times of London in 1980, Hebborn wrote: “Instead of stressing how clever the possible imitations are, it might be more rewarding to examine the abilities of those who made the attributions and on whose advice large sums of public money were spent.”
The Colnaghi incident didn’t slow Hebborn down; he claimed to have made another 500 forgeries after he was exposed, and sold them to dealers who were perfectly willing to accept works of questionable provenance. In some cases, these dealers even asked him to “find” Old Master drawings, which he forged and then sold to them.
“I think you might possibly find an honest man,” Hebborn said in the BBC documentary. “I just don’t think you’ll find an honest man who’s also a dealer.”

The legacy of fakery 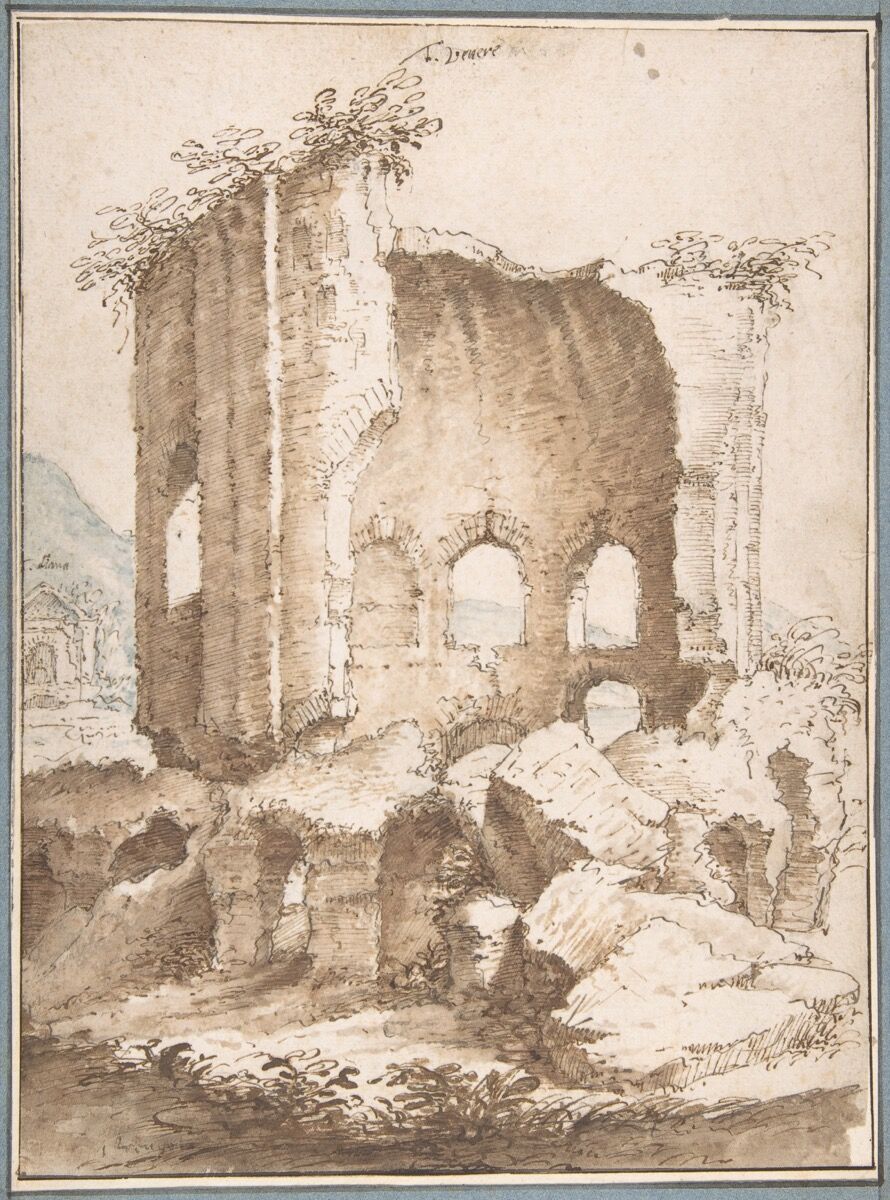 In his memoir, Drawn to Trouble, Eric Hebborn claimed he forged this etching, which ended up in the collection of the Metropolitan Museum. Both the museum and Hebborn's former romantic partner dispute this account. The Met attributes View of the Temples of Venus and of Diana in Baia from the South (ca. 1594) to the “circle of Jan Brueghel the Elder.” Image courtesy of the Metropolitan Museum of Art.

Hebborn was never charged with any crime. His appearance in the 1991 BBC documentary was among his first steps into the public eye, followed by the publication of his memoir Drawn to Trouble: Confessions of a Master Forger that same year. He charged Sotheby’s, Christie’s, Colnaghi, and his friend Hans Calmann with subpar expertise that allowed his works to make their way into some of the most notable art institutions in the world.
But the mystery didn’t end there: Plenty of museums dispute the fact that works hung in their galleries are actually fakes. Both the J. Paul Getty Museum and the Metropolitan Museum of Art have disputed that they own works by Hebborn. But in the absence of scientific evidence, we may never know how many museums still proudly display genuine Hebborns, attributed to someone else.
Peter Gerard, a filmmaker working on a series about the master forger based on Hebborn’s memoir, thinks his story is still relevant in this “era of questionable authenticity of images.” Today, the term “fake news” is thrown around casually by the president of the United States in speeches and on Twitter, and anyone who knows how to use Photoshop can doctor an image. But Hebborn scoffed at experts long before the dawn of the “Post-Truth Era.”
The mythic art world swindler met an unsettling end; in 1996, Hebborn was found with his skull fractured in Rome, where he had resided for 30 years. Despite rumors that the mafia was involved in his death, no one has ever been arrested in connection with the crime.
Decades after Hebborn’s death, concerns over authenticity in the art market remain alive and well. Salvator Mundi (ca. 1500), which some experts consider to be
Leonardo da Vinci
’s last known work, has been pulled from a Louvre show due to concerns over its authenticity. Last month, an Italian painter was arrested in connection to a forgery ring; he stands accused of forging works in the styles of
El Greco
and
Correggio
. The Louvre, the National Gallery in London, the Metropolitan Museum of Art, and Sotheby’s have all been caught up in the scandal.
“There’s still this need to discover things, so you can keep the market going,” Gerard said. “As long as the market has that trust, people are going to take advantage of it and keep putting forgeries into it.”
Christy Kuesel
Related Stories

How Forgers and Grifters Have Conned the Art World for Generations 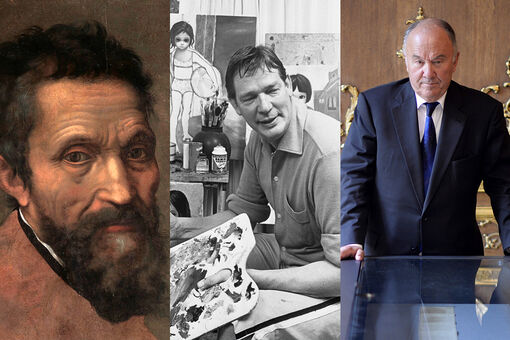 How Forgers and Grifters Have Conned the Art World for Generations
Benjamin Sutton
Aug 30, 2018