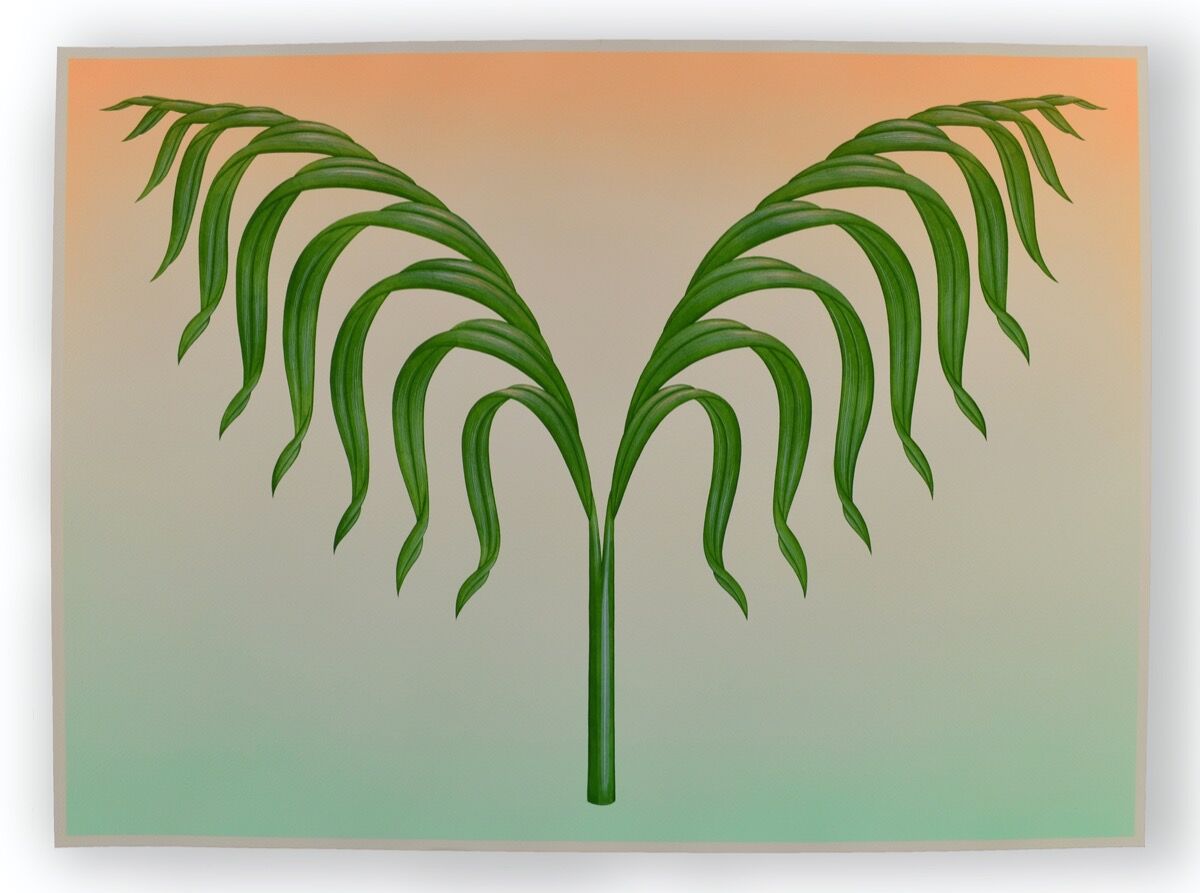 Molly A Greene, Freedom is to Seep Out of Myself, 2020. Courtesy of the artist and Kapp Kapp.

Since February, as COVID-19 rapidly grew from precariously localized to a full-on global pandemic, art fairs around the world have been forced to think on their feet and adapt. Beginning with Art Basel in Hong Kong, the spring fair season quickly pivoted to online viewing rooms that would, to varying degrees, attempt to replicate the live, booth-based experience virtually. The New Art Dealers Alliance (NADA), however, decided to do something different.
Simply and succinctly titled “Fair,” NADA’s new online art fair was created as a form of mutual aid, with galleries and artists selling work in order to support both themselves and one another. “It reflects what we think is fair in this climate and situation,” said NADA executive director Heather Hubbs. Open to member and non-member galleries alike, for every sale made through Fair, 20 percent goes into a collective pool that’s split evenly among all participating galleries. Another 20 percent is split among all of Fair’s participating artists, and another 10 percent is given to NADA—the remaining 50 percent goes directly to the selling gallery and artist.
“My team and I were brainstorming things we could do to respond to the virus,” said Hubbs. “One of our board members came with a concept for an online sale that spoke to a ‘we are all in this together’ idea.” Spread over the course of four weeks, every Wednesday, Fair’s exhibitors present a new work of art. Instead of competing for sales, Fair allows its 200 exhibiting galleries to collectivize their mutual interests for a common good. And this collective model couldn’t have come at a better time. 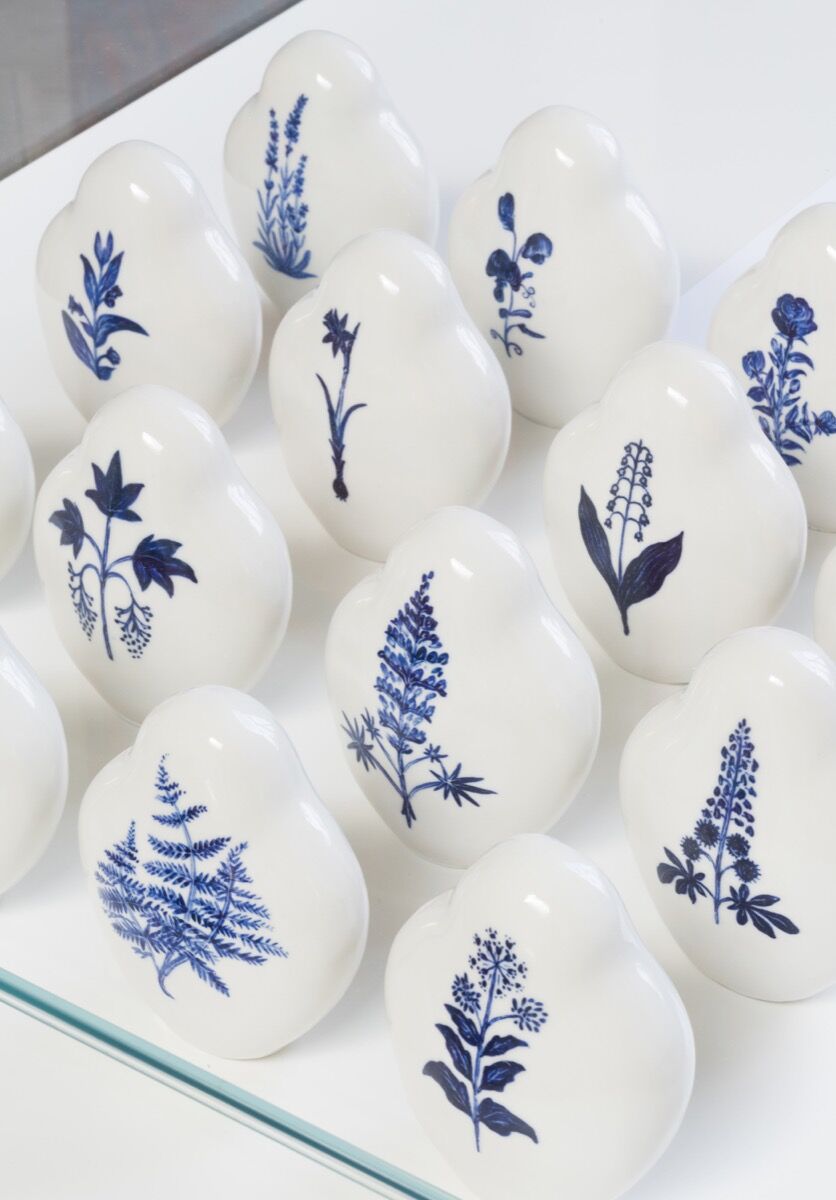 Albin Werle, detail of Game for a Future Artificial Intelligence, 2018. Courtesy of the artist and Hotel Art Pavillion. A recent survey conducted by the Art Dealers Association of America (ADAA) found that U.S. galleries projected a loss of 73 percent in gross revenue due to COVID-19. For many participating dealers, including New York’s Simone Subal, the online fair presented an immediate way to help support the artistic community. “I was drawn to Fair’s collaborative spirit and how its pooling of resources hopefully will be able to bring some much-needed relief to a number of artists,” said Subal.
At least 24 works sold in Fair’s first week, with Hubbs stating that many collectors have responded positively to the platform’s price transparency. The range of price points—primarily five- and four-digit figures—reflects the wide spectrum of galleries exhibiting. On the higher end, Tokyo gallery Misako and Rosen sold a recent canvas by
Naotaka Hiro
, Untitled (Set) (2020), for $35,000. Meanwhile, Philadelphia- and New York–based gallery Kapp Kapp sold
Molly A Greene
’s on-paper painting Freedom is to Seep Out of Myself (2020) for $2,250; a
Sarah Slappey
drawing fetched $1,800 at New York’s Sargent’s Daughters; and a Kirsty Budge painting sold for $2,500 through Melbourne’s Daine Singer.
Still, despite the early success, many are speculating whether Fair’s first-week momentum will be sustained over the four-week stretch. “It certainly neutralizes the VIP exclusivity rush from some of the other online fairs and proposes a more relaxed and maybe democratic approach,” said Subal. “In our attention-deficit-prone society, I am curious to know the difference in online activity from week one to week four.” 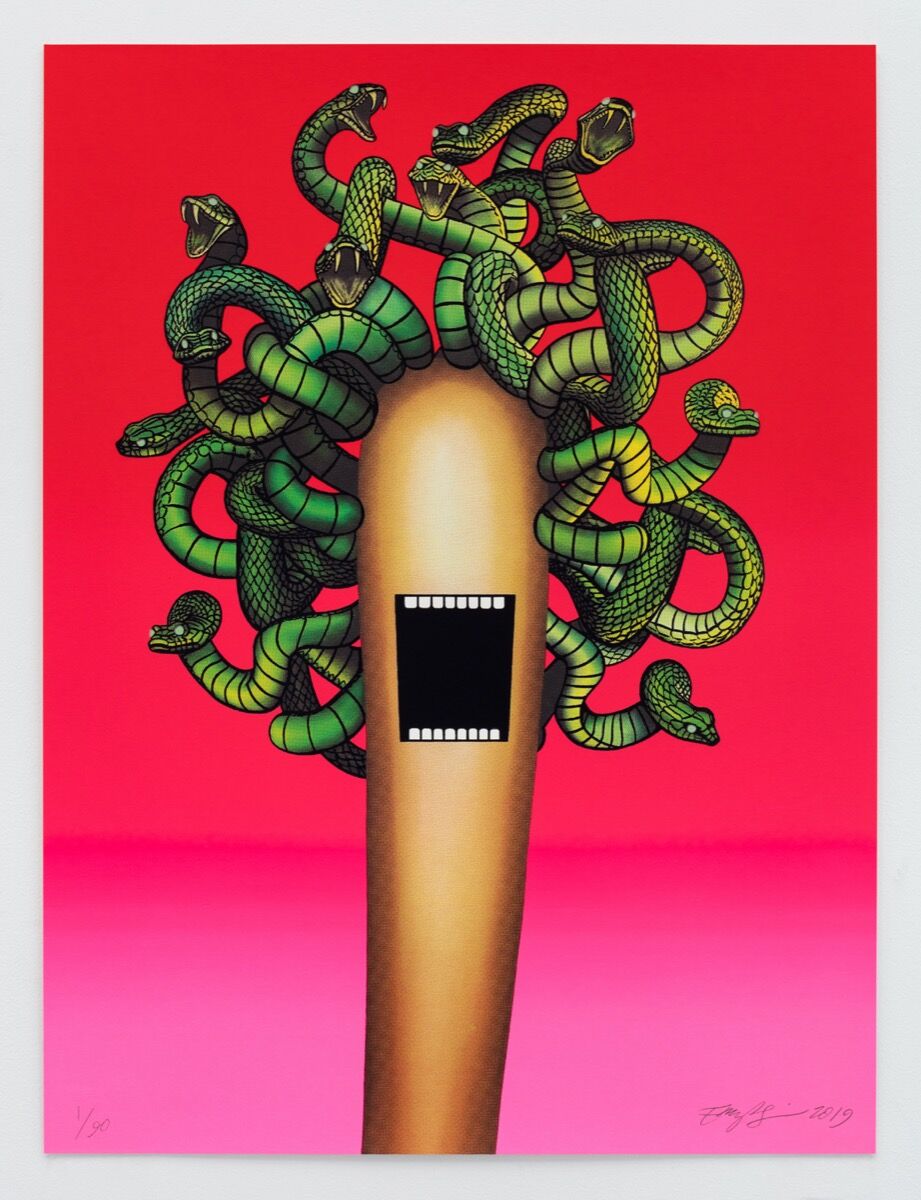 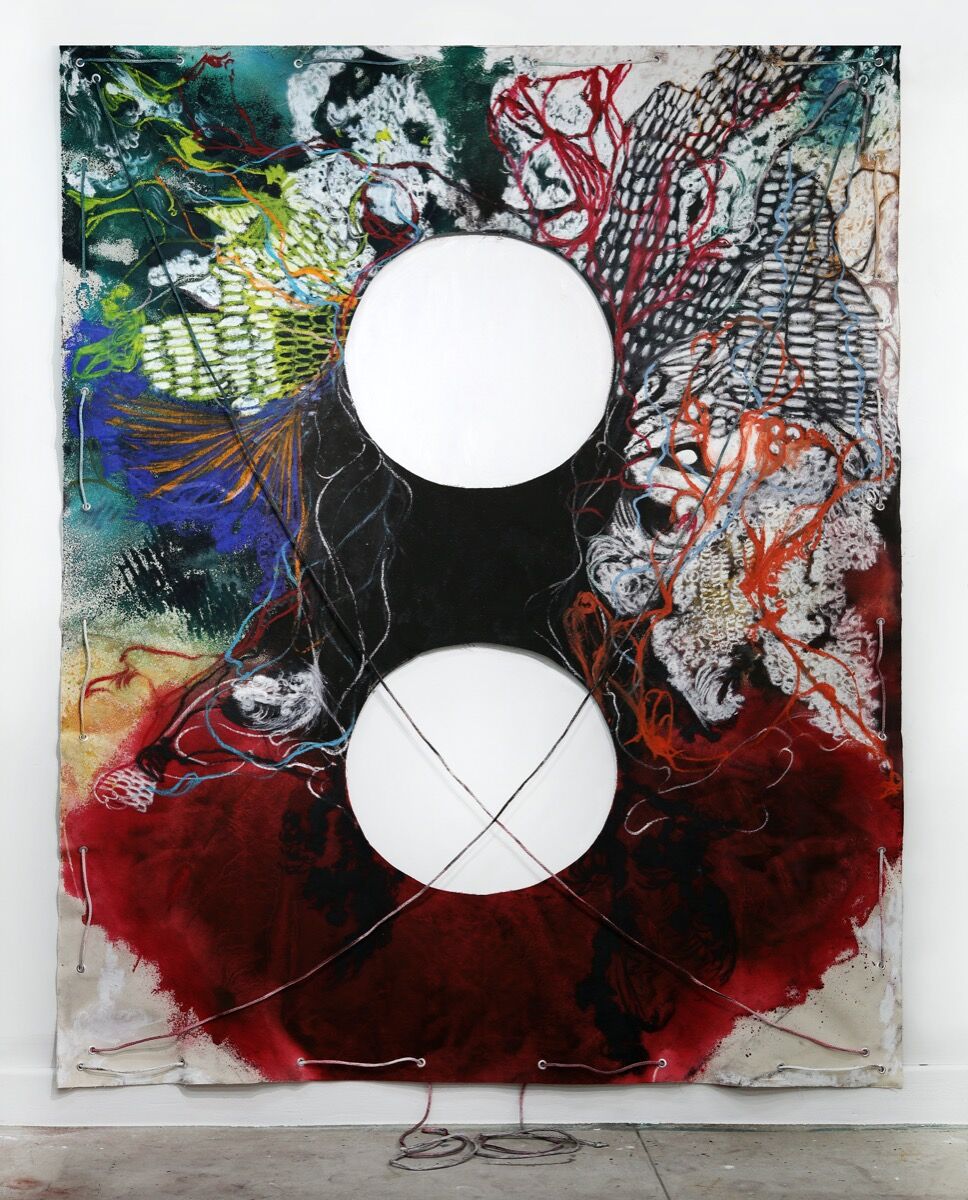 Naotaka Hiro, Untitled (Set), 2020. Courtesy of the artist and Misako and Rosen.

Advertisement
Hers was among the first galleries to make a sale, with
Emily Mae Smith
’s poppy screenprint Medusa (2019), which was priced at $1,200, selling shortly after Fair opened. “I think Emily’s Medusa image—with its mouth frozen in an almost
Edvard Munch
–like scream—is a fairly timely portrayal of our crazy times,” said Subal.
Poignancy is something that many of the works at Fair have in common. The fact that it was developed specifically in response to the pandemic has allowed dealers to curate to the moment. Another piece that sold during Fair’s first week was a Maggie Ellis watercolor presented by New York dealer Charles Moffett, which went for $1,500. The work, titled Sparrow with Shadows (2020), depicts a city sidewalk, desolate save for a hunched man, the titular sparrow, and a face mask–clad woman walking down the street. “[Ellis has] really hit on something in a way that is delicate, beautiful, moving, and very much in her own style,” said Moffett. “It just seemed like the perfect thing to present.”
Hotel Art Pavillion, meanwhile, took a characteristically more futuristic approach to our dystopian present with Danish artist Albin Werle’s Game for a Future Artificial Intelligence (2018). Listed for $3,000, the set of 16 hand-painted porcelain vessels are game pieces that invite a future AI to play with the artist—a kind of proposed Turing test. “It’s ironic to be showing his work during a time of social distancing,” explained Johnny Stanish, one half of the duo that makes up Hotel Art Pavillion. “The aim for so many of his works is for people to be collaborative—there are no winners or losers.” 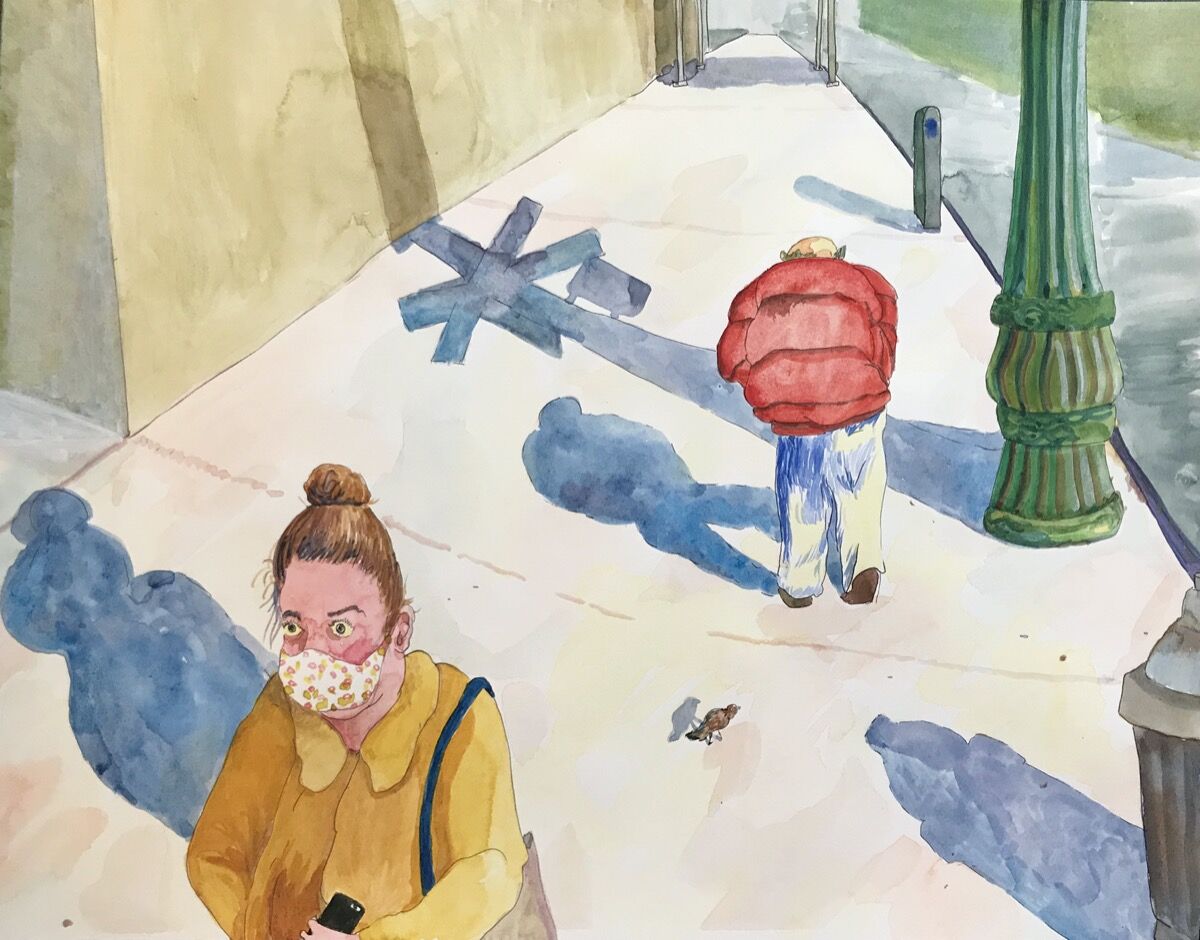 Maggie Ellis, Sparrow with Shadows, 2020. Courtesy of the artist and Charles Moffett.

NADA’s Fair signals the Hotel Art Pavillion’s first activity since it shuttered its brick-and-mortar backyard space last August. “I’d honestly prefer to do this,” said Loney Abrams, the gallery’s second half. “Our expenses here are nothing! At a normal fair, you spend so much money exhibiting, you just hope to break even.” According to the most recent edition of economist Clare McAndrew’s Art Market Report, art dealers spent an estimated $4.6 billion participating in fairs in 2019, accounting for a full 36 percent of galleries’ external expenditures. Moffett echoed Abrams’s enthusiasm for Fair’s collective business model: “That team mentality or communal mentality is an incredibly important one that I wish was a bit more widespread in our world,” he said.
Whether this model will be carried over post-pandemic, however, remains to be seen. For gallerist Susan Inglett, the likelihood seems slim. “As a capitalist at heart, I’m not sure,” she said. “Right now, there’s a need for it but I’m not sure that going forward, it’s a model that needs to be sustained.” Her gallery participated in the Dallas Art Fair’s online edition earlier this spring, where it sold works by
Robyn O’Neil
and
Hope Gangloff
. 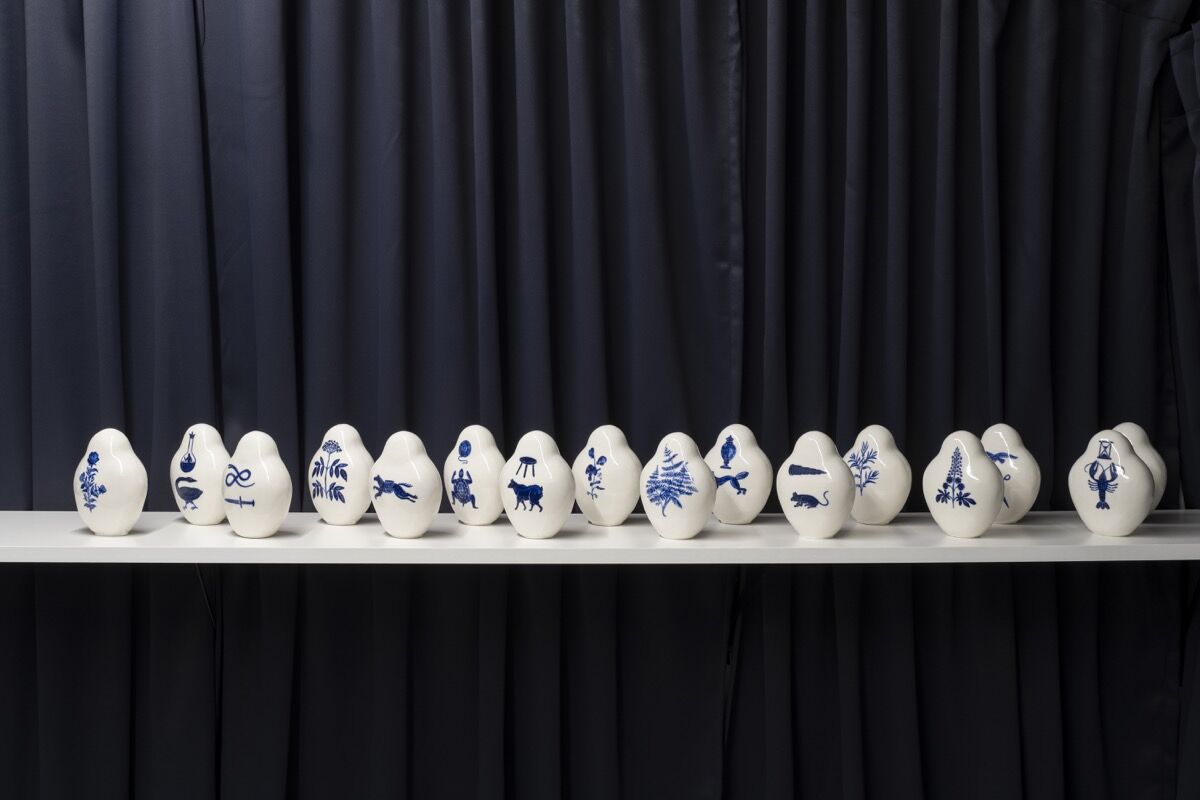 Albin Werle, Game for a Future Artificial Intelligence, 2018. Courtesy of the artist and Hotel Art Pavillion.

Hubbs was similarly tepid about the possibility of continuing the Fair model outside of the current climate. “It wouldn’t make sense for NADA to have the same exact breakdown in terms of finances if it were a regular fair,” she said, citing the enormous additional cost of setting up and running a physical fair (last month NADA canceled the sophomore edition of its Chicago fair, which had been slated for September, due to the pandemic). She did, however, express interest in continuing to experiment with online platforms.
“The future is going in this direction,” Hubbs said. “If there’s a smart way for NADA to have an ongoing online thing in the future, that’d probably be a good thing for us to be thinking about.”
Now in its second week, Fair will continue through June 21st, with new offerings going online every Wednesday.
Shannon Lee is Artsy’s Associate Editor.
Related Stories

Marfa Invitational Opens with Brisk Sales and a Sense of Optimism