Students at MS 22 in front of a completed anti-gun violence mural. Courtesy of The Bronx Museum of the Arts.

New York City is the safest it has been in decades, with city-wide violent crime levels in 2017 continuing an overall downward trend. Last year, 917 people were struck by gunfire, which is the first time that stat has dipped below 1,000 since the 1950s, the New York Times reported in late December. Despite this, though, the decline hasn’t been seen across the entire city—just 17 of the city’s 77 police precincts reported 51% of shootings that occurred across the five boroughs.
This year, the Bronx Museum of the Arts is again participating in Art a Catalyst for Change, an ongoing initiative backed by the city council, which is aimed at using art to reduce gun violence in the neighborhoods where it is occurring the most, like the South Bronx and East New York. (The initiative is part of a larger citywide initiative to lower gun violence.) The Bronx Museum is working with students at four local schools, developing programs where artists and educators work with kids to foster skills like conflict resolution; explore how art can affect social change; and discuss the issues underlying gun violence, including systemic racism. The museum, which keeps social justice as a core part of its mission, is now participating in the program for the third year.
Last year, around 80 students from the four schools participated. “The goal is to create a final project that serves as an anti-violence campaign that students can distribute or make public,” said Patrick Rowe, the Bronx Museum’s director of education. Students create a variety of artworks, from drawing and performance to collaborative painting. The works are all created with core questions in mind, according to Rowe, such as, “How can we use art to combat [gun violence]? But also, how can we build stronger communities?” 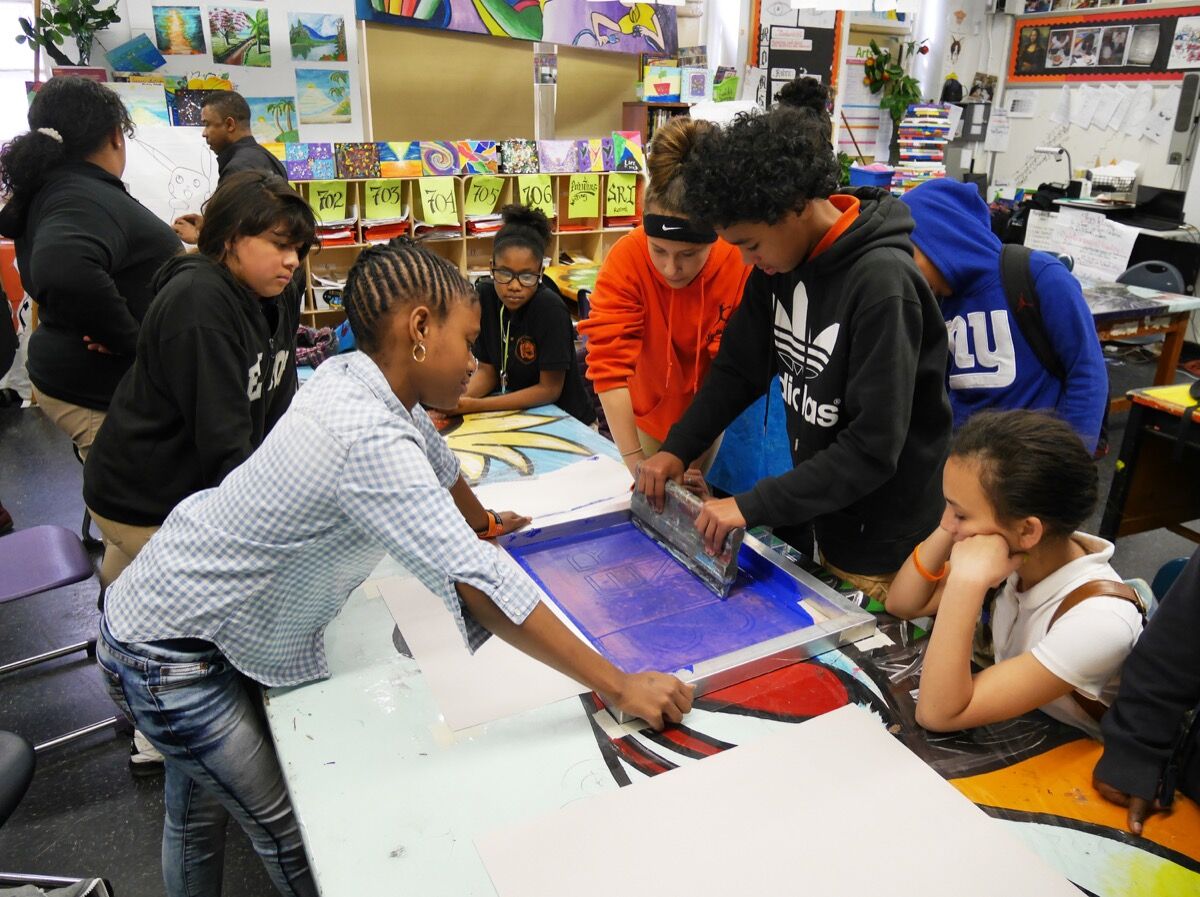 Students at MS22 experimenting with basic screen printing techniques. Courtesy of The Bronx Museum of the Arts.

One project that will be created over the next semester, by students from the School for Excellence in the Bronx, is a newspaper that will be printed in May. The group was among the first to send letters of solidarity to the students in Parkland, Florida, who have been battling for gun regulations following last month’s shooting at Marjory Stoneman Douglas High School. The efforts of those students, who have tirelessly made their case on television and social media, have fiercely challenged equivocating politicians and backfooted the powerful pro-gun organization NRA as never before. As a result, the fight for gun control has been renewed across the nation.
“When young people see other young people who are mobilized politically, it’s deeply inspiring, and they feel that energy,” Rowe said.
Students at M.S. 22 in the Bronx will work with the museum’s teaching artists to develop a major mural on the back of their school—to be completed towards the end of the spring—with plans to create poster-sized versions of it that can be distributed to other schools, Rowe said. Last year, students at the Bronx’s M.S. 301 also created an anti-gun violence mural, which emphasizes conflict resolution, with practical tips like “talk it out” embedded in the design. Students play a key role in generating the material, and the artists who work with them help with the difficult work of actually transforming an idea into a full-blown mural.
Teaching artists will also help students at M.S. 301 screenprint anti-gun violence campaign posters and t-shirts. At P.S./I.S. 218, a group of roughly 25 students will work after school to create a collaborative board game that has what Rowe called “a digital component,” which is also aligned with an anti-gun violence campaign. 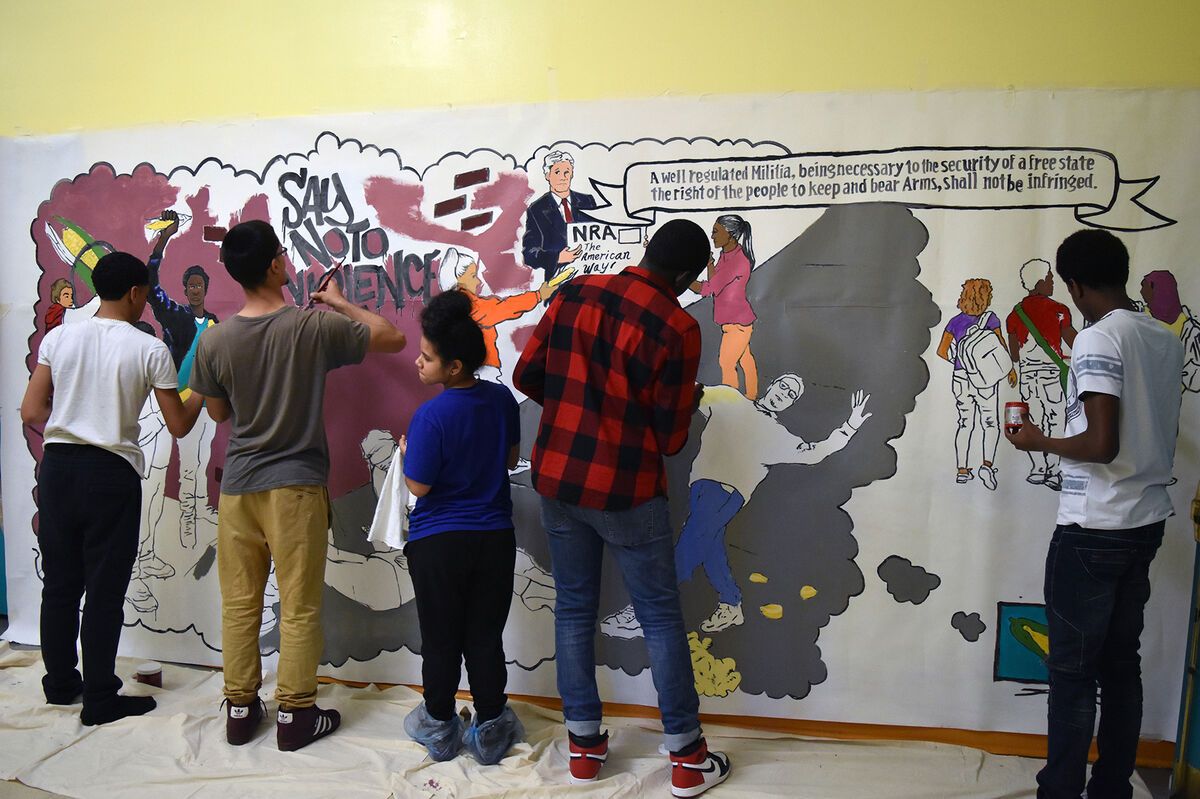 Students from School of Excellence High School working on their anti-gun violence mural project. Courtesy of The Bronx Museum of the Arts.

Advertisement
“Central to all of it is this idea of having guests—artists, organizers, activists, educators—who can come to talk to young people about the larger issues that lead to things like gun violence,” Rowe added. Among the guests have been George Emilio Sanchez, who facilitates Theater of the Oppressed workshops, and ENACT, which provides drama therapy.
For the first time, the Bronx Museum of the Arts will host the culminating Art a Catalyst for Change exhibition, likely in June, in which students from 15 programs from Manhattan and the Bronx will share their work and ideas developed as part of the program, Rowe said. Going forward, a key goal is to “think about how we can assess the impact of these programs—quantitatively and qualitatively,” he added. And in a moment where young people are not only being taken seriously as activists but are being increasingly recognized as crucial to a successful political movement, the students participating in Art a Catalyst for Change have the potential to make a major difference.
Isaac Kaplan is an Associate Editor at Artsy.
Related Stories