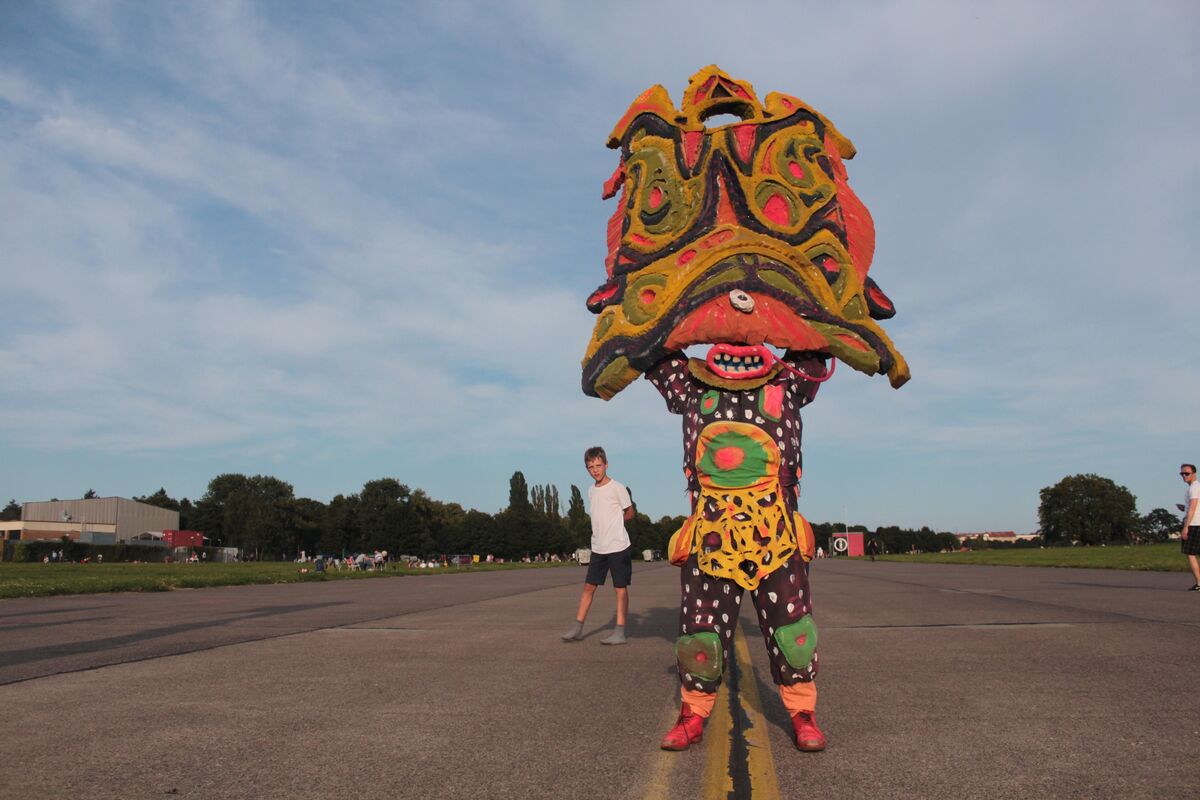 On an impossibly blue-skied day this past August, strange beasts prowled the flat expanse of Tempelhof Field, a former Berlin airport converted into parkland. Grotesque but still kid-friendly—something between puppets and wearable sculptures—they were the creations of Poncili Creación, a Puerto Rican art collective helmed by twins Pablo and Efrain Del Hierro, who this summer and fall are sweeping across Europe with their singular brand of confrontational whimsy. By combining elements of dance, theater, puppetry, punk rock, improv, and carnival, Poncili offers up a new kind of performance art: smart, entertaining, unpretentious, and totally wild.
Poncili was in the park to mingle with the locals and hand out flyers for a handful of Berlin engagements, all at very different venues. One was at Teepee Land, an outdoor squatter outpost on the banks of the Spree River. Roosters ambled around the dusty grounds, which were directly adjacent to a glassy luxury condo. The evening was more open-mic reggae jam than art event. Young Germans with or without dreadlocks did their best to channel the faraway spirit of Jamaica. The scene was weird enough before Poncili took the spotlight, tumbling in front of the stage with little advance warning.
Like most of the group’s performances, this one hewed to a basic plot, sketched out in storyboard form. In it, various monsters and humanoids fought, tussled, rattled chains, yelled, faux-urinated on each other, and gave birth. Throughout, a small group of musicians (strangers, solicited for their contributions just before the performance began) provided an improvisionational soundtrack. 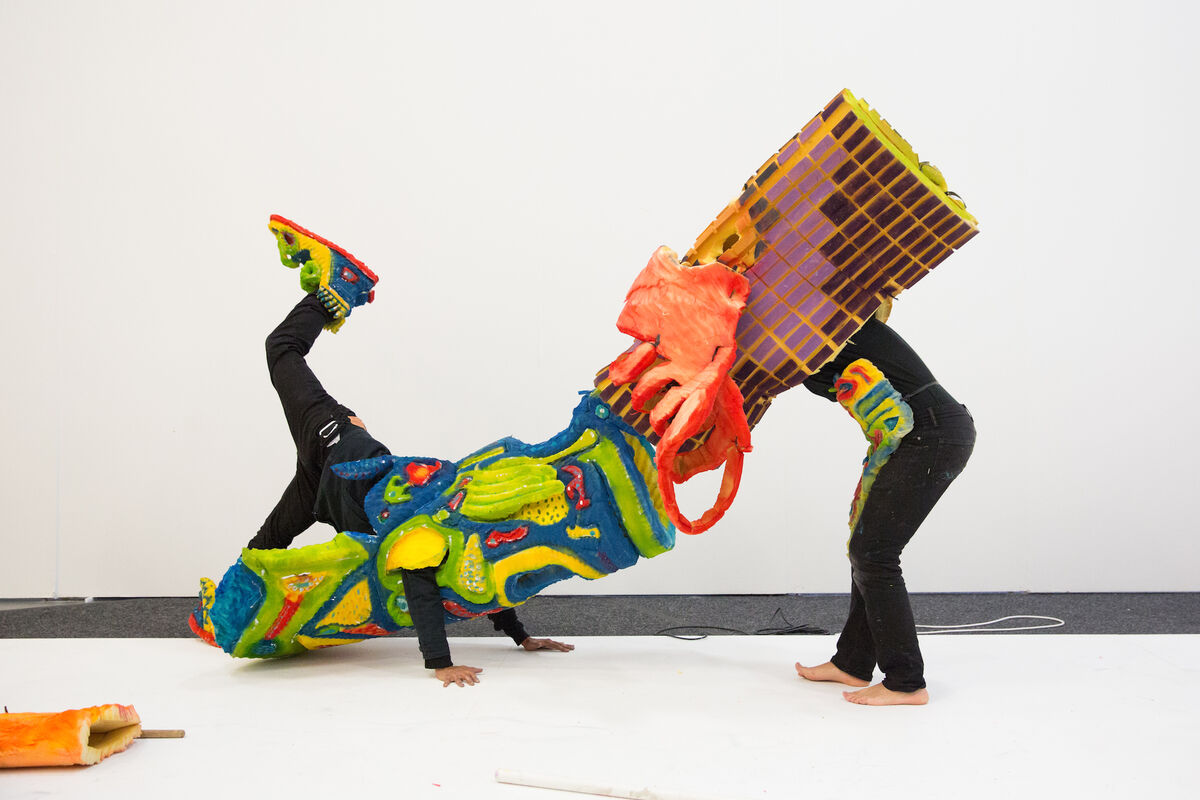 Pablo and Efrain—identical, though differentiated by their distinctly aggressive haircuts—are the ringleaders of this controlled madness. The duo, now 26, cut their teeth as high-schoolers back in Puerto Rico. While they’re not trained musicians themselves, they had peers who were. They formed a band, instructing the members (including an opera singer) as to their overall vision. “We’d put salsa, punk, and reggae in one song—we wanted to clash everything together,” explains Pablo when I meet up with him and Efrain in Berlin.
That band—which featured the brothers rapping over the postmodern muddle of styles, dressed in cardboard costumes—led to an equally boundary-less project in 2012. The seeds of what would become Poncili Creación were planted in a weekly performance series held at El Local, an art space and concert venue in the Santurce neighborhood of Puerto Rico’s San Juan. “We started as a decentralized collective,” Pablo says. “Anyone who wanted to could join and form part of the experience: Bring your own puppets, bring anything you had, and we would incorporate you into our play. At that point we were basically anarchy, this Frankenstein of art.”
“It was a collective that didn’t exist anywhere else other than at this bar, on Wednesdays,” Efrain says. After each performance, they’d solicit the audience for future concepts and participation. “This 16-year-old kid brought us a an amazing, super confusing play he had written, that took place inside a guy’s body,” he recalls. “It was a week-long project: We built the puppets, and we did his play.”
Despite how inclusive these weekly performances were, “at some point, the word ‘aesthetic’ or ‘artistic language’ was mentioned,” Pablo recalls, “and we started saying: ‘Okay, we have a specific thing that is ours.’” A typical example of a storyboard that the collective uses to outline the basic plot of a performance. Photo by Scott Indrisek. 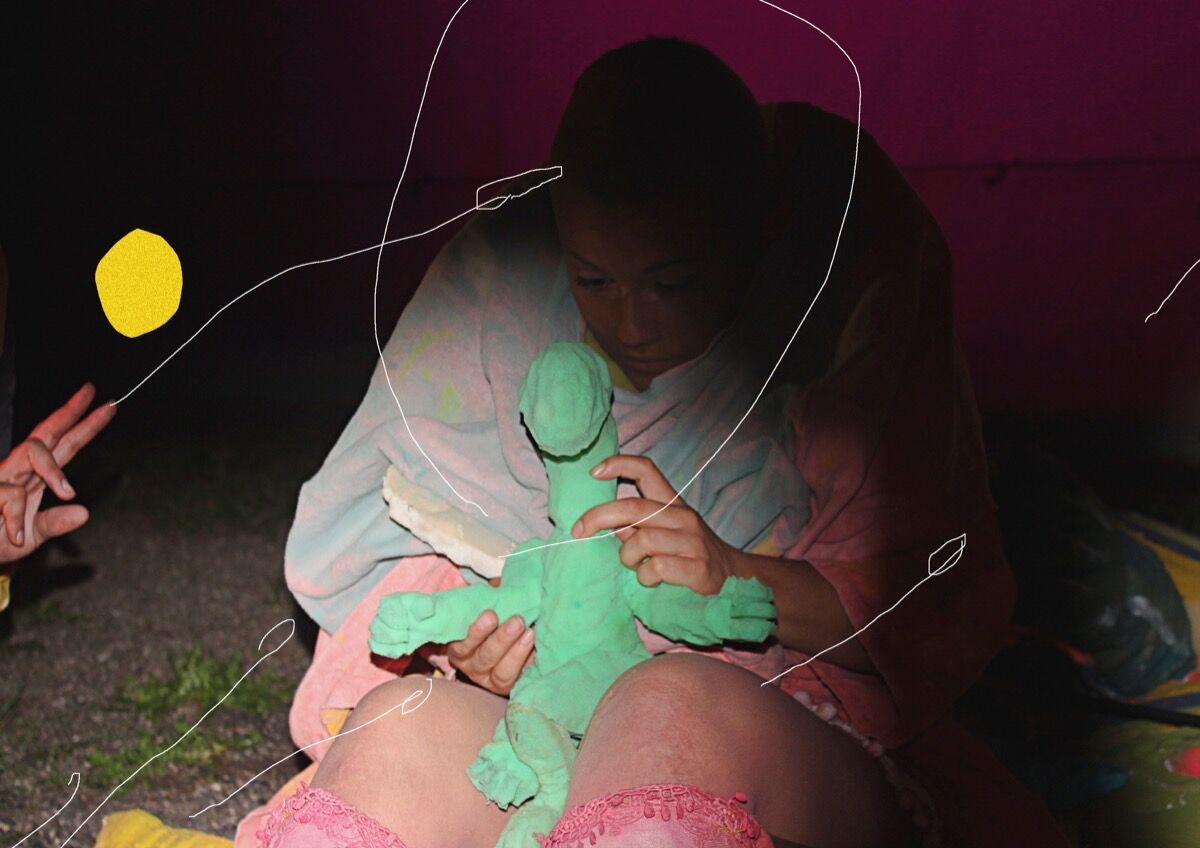 That artistic language grew out of the duo’s preferred medium: foam, sourced from discarded couches or mattresses, that they would then carve and paint. “It’s a cheap material with so many properties,” explains Efrain. “It expands, it contracts, it sticks to itself. It can be cut easily in any direction. You can leap on it, or throw it.” The brothers would stage what they refer to as “couch murders”: theatrical events in which, posing as contemporary cavemen, they would attack and dismember a piece of furniture, turning it into makeshift clothing and then culling the foamy “meat.”
Poncili Creación didn’t properly conceive of themselves as artists until they met Francisco Rovira Rullán, the dealer behind San Juan-based gallery Roberto Paradise. He got them to view their materials—props, puppets, costumes—as sculptures, something that could have another life in the white cube. That led to a series of exhibitions at the space, and regular appearances at art fairs like the New Art Dealers Alliance (NADA) in New York and Miami. They began making their version of paintings, cut-foam reliefs that nodded to German and Japanese wood carvings, but continued to activate all of these works via performances that were free-wheeling, esoteric, and more than a little shamanistic.
Some five years later, Poncili still occupies a shifting position within the art world. Pablo characterizes it as less of a collective than a “performance duo that loves to collaborate with others. From that anarchic-hippy ‘welcome all’ [mentality], we’re now finally opening up to directing other people, to be in the position of a coordinator making things happen.” That includes bringing along other members for the European tour—including Canadian muralist Danaé Brissonnet, and artist @hi_leebaby, who has been documenting the group’s live performances. They’ve also begun producing a series of stop-motion animations in conjunction with Tost Films, bringing their carved-foam creations to life.
Poncili Creación may often perform in galleries, but this September they’ll also take part in a French puppetry festival. Overlapping with this year’s Art Basel Miami Beach, the brothers will undertake a residency sponsored by Mana Contemporary, for which they’ll launch a sort of shop-slash-doctor’s office in which they’ll spotlight various “products,” like the Telefonito, a colored-foam sculpture that turns your iPhone into an anthropomorphic character. 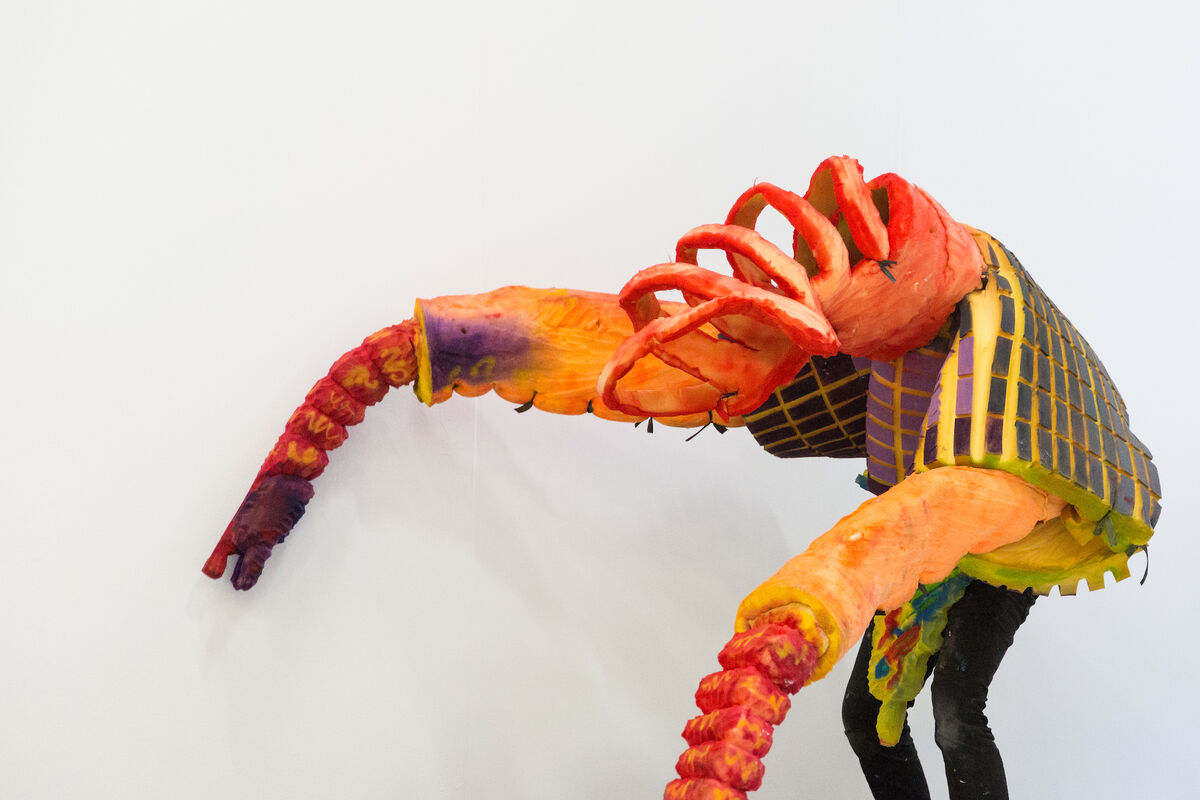 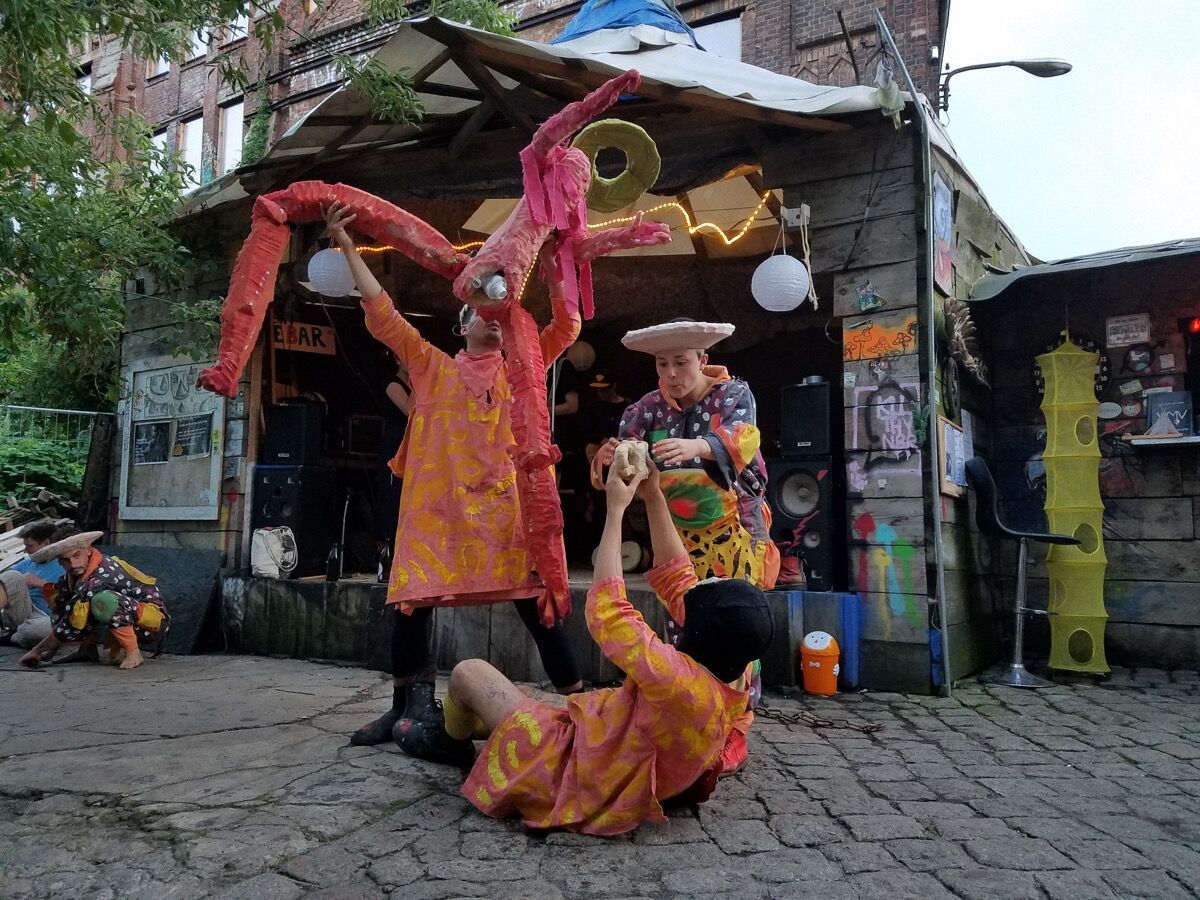 Despite institutional kudos and support, Poncili has never given up its raw roots. Earlier this year, they appeared in the basement of a Bushwick, Brooklyn space known as Bohemian Grove. With an audience packed in tight around them, their performance was visceral, loud, and sweaty, flirting with the edges of violence and aggression.
“It was intense,” Pablo says, approvingly. “That’s part of what makes us feel alive.”
“The chameleon possibility,” Efrain adds, “that this show is like water: It takes the shape of the container you put it in.”
The third of the group’s trio of summer shows in Berlin took place at Gr_und, a more typical art space in the neighborhood of Wedding. Most of the evening’s programming explored the tired and earnest clichés of performance art. A barechested, bearded man endlessly painted his face in the foyer; a woman inside the gallery swooned improvisationally. Toward the end of the evening, Poncili Creación made its entrance, heralded by one of the twins, dressed head-to-toe in foam accessories and blowing on a handmade instrument that worked a bit like an overly long vuvuzela.
The basic narrative of the performance was similar to that seen at Teepee Land—there was fighting, and urinating, and a birth, as well as a blue beast whose eyes popped out of his head, and a foam handgun that inverted and turned into a drinking cup—but Poncili had effortlessly adapted to the new venue. Without a reggae band to back them up, the brothers and their collaborators made their own rhythm. An electric saw was used to loudly slice into lengths of metal, shooting off showers of sparks; chains and other implements were scraped and banged across the rough stone floor. 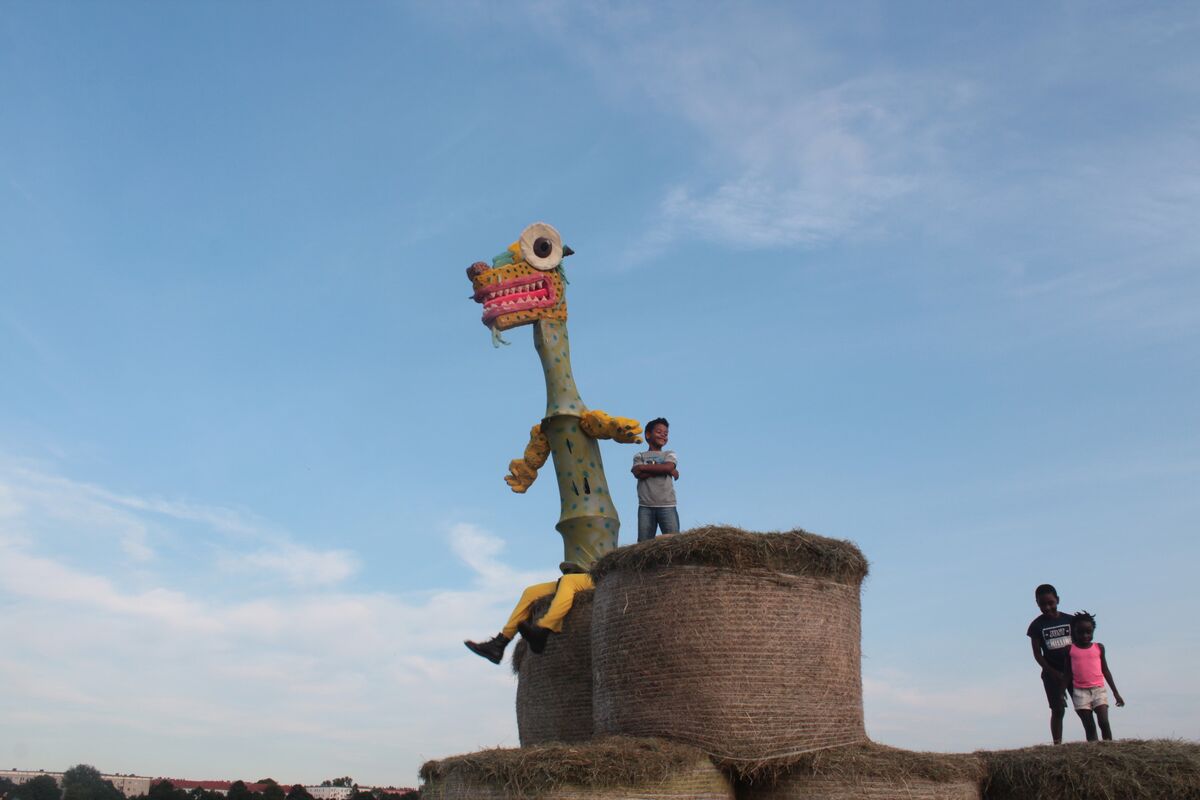 Much of the audience (as well as the other participating artists) clearly didn’t know what to make of the group. In contrast to the rest of the evening’s performances, Poncili felt slightly unhinged, and possibly dangerous.
“I like this junction of performance and punk,” Efrain says. “In Miami, where we lived for a while, we started being included a lot in the music scene—they were thirsty for this kind of stuff, that is new, but speaking the same language. People would tell me: ‘I like your set. Your set was nice.’ So forget performance, or theater—we are Poncili Creación. We’re doing our thing. And if you want to see Poncili Creación, you see a set—a set of what we do.”
“We call it an exploration,” Pablo adds. “We’re doing a show, but we’re also just learning how to be better…human beings, I guess. It’s a performance of an exploration of a life.”
Scott Indrisek
Related Stories