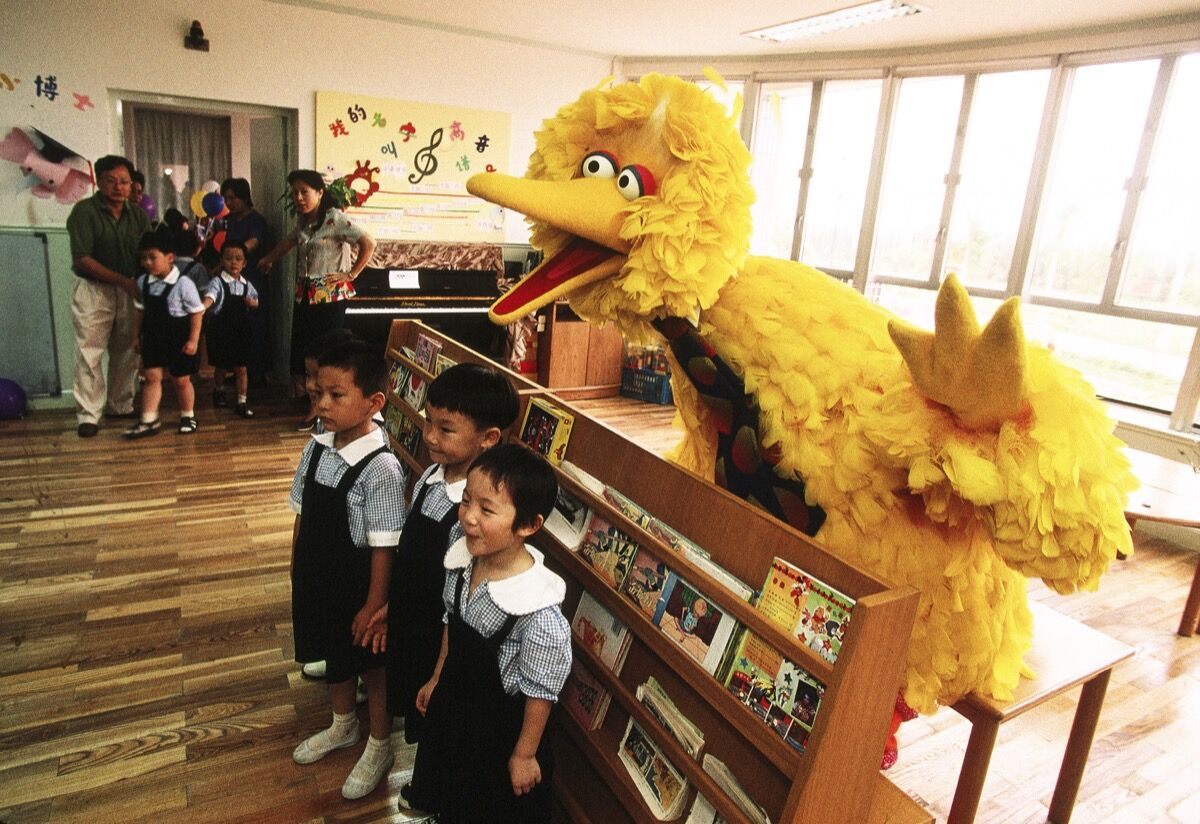 Children pose in class for a photo with Big Bird of Sesame Street. Photo by Joe McNally/Getty Images.

It took becoming a mother to realize why Big Bird was my favorite character on Sesame Street. Watching the show with my 2-year-old daughter, it struck me how much Big Bird reminded me of my Nana, who is 87 years old and was born and raised in an Irish Catholic neighborhood in Manhattan. There is something about the flamboyance of Big Bird’s bouffant, and his yellow and pink coloring, that recall the vibrant velour jumpsuits she favors over any other kind of outfit. Technically, she is nothing like Big Bird—for starters, she is a human. But in that beautiful, fluffy, feathery body, with its deep New York accent, the soul of my Nana is somehow expressed. Like Big Bird, she has retained so much of her childlike innocence.
Big Bird was not intended to be like a child. On the first episode of Sesame Street,which aired on November 10, 1969, he played a sort of country yokel who couldn’t figure out life in the city. Within a few episodes, his puppeteer, Caroll Spinney—who announced his retirement from Sesame Street this week—asked Jim Henson, the creator of the character, if he could play Big Bird as more of a surrogate for the kids who watched the show—a forever 6-year-old. Henson agreed, and the Big Bird we know today was birthed. 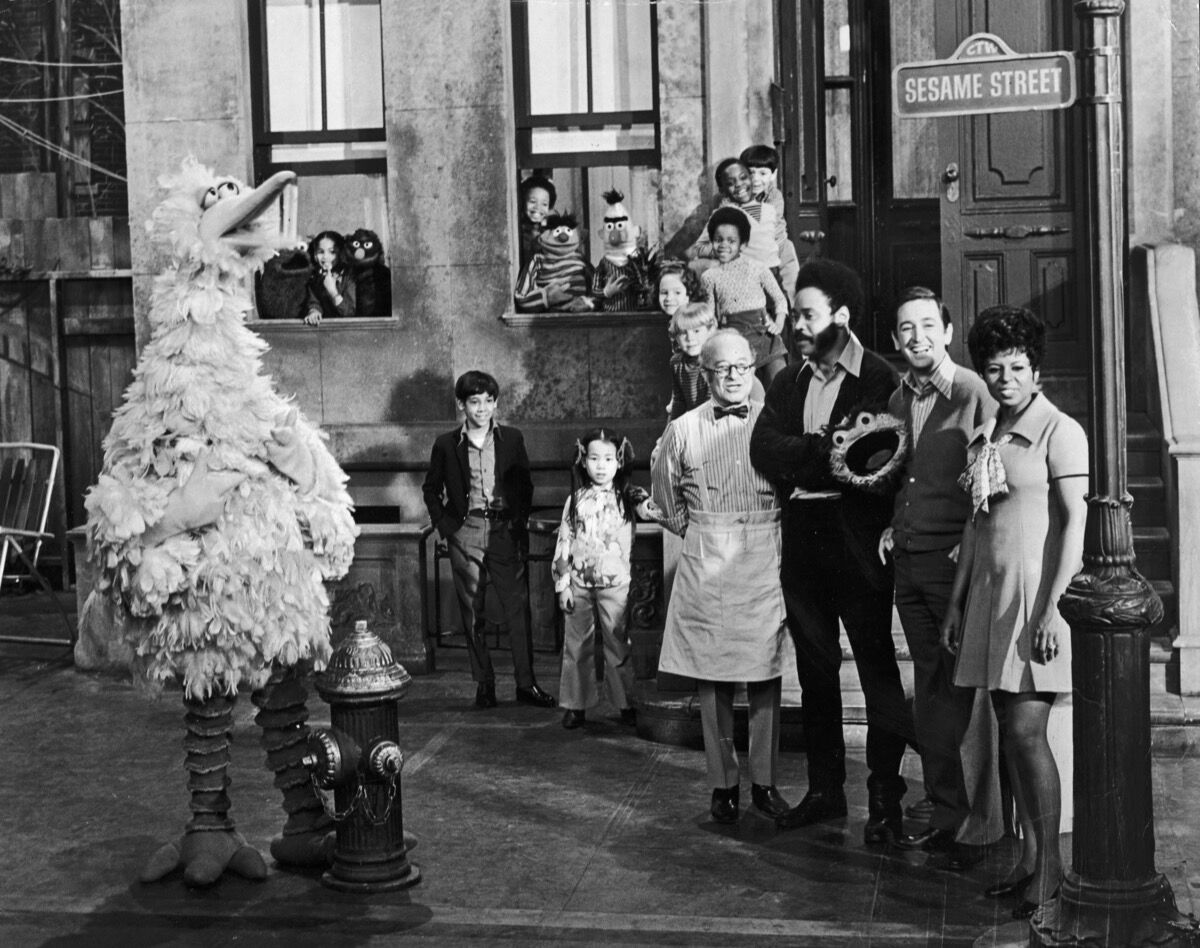 Spinney, who was born in Waltham, Massachusetts, in 1933, and worked as a puppeteer and cartoonist after serving in the Air Force, met Jim Henson at a puppeteering festival in 1962. In 1969, Henson asked Spinney to join the cast of Sesame Street, a revolutionary new show that was formulated not only to distract children, but also to educate them. Spinney was given the two characters he played until retirement: Big Bird and Oscar the Grouch, who were both realized visually by the late costume designer Kermit Love. Oscar debuted as an orange creature, but quickly transformed into a disheveled, grumpy green monster with heavy brows, who, to this day, can make me laugh. He, too, reminds me of my Nana, and, in a way, many other people I know who were born and raised in New York: deeply kind at their cores, but unfriendly on the exterior; a product of a city where you’re exposed to too many different kinds of people to be able to hate anyone, but nevertheless, you have to be a little bit hard to protect yourself.
Spinney has called both characters his “alter-egos.” Carl Goodman, executive director of the Museum of Moving Image (MOMI) in Queens, which opened a permanent exhibition of Jim Henson’s work in 2017, notes that the values both characters embody (such as love, forgiveness, honesty, and bravery) are important, especially in today’s political environment. “They teach children things they might not be learning from today’s world, and especially the media,” he says. 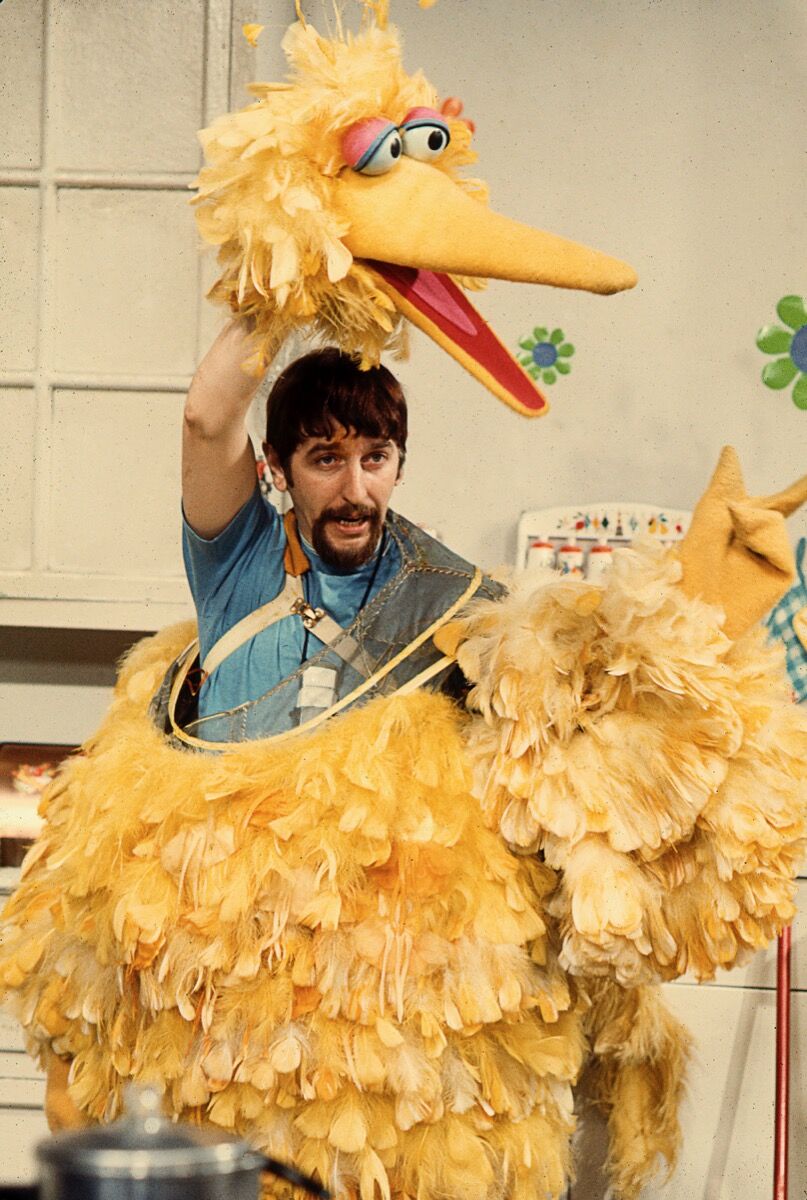 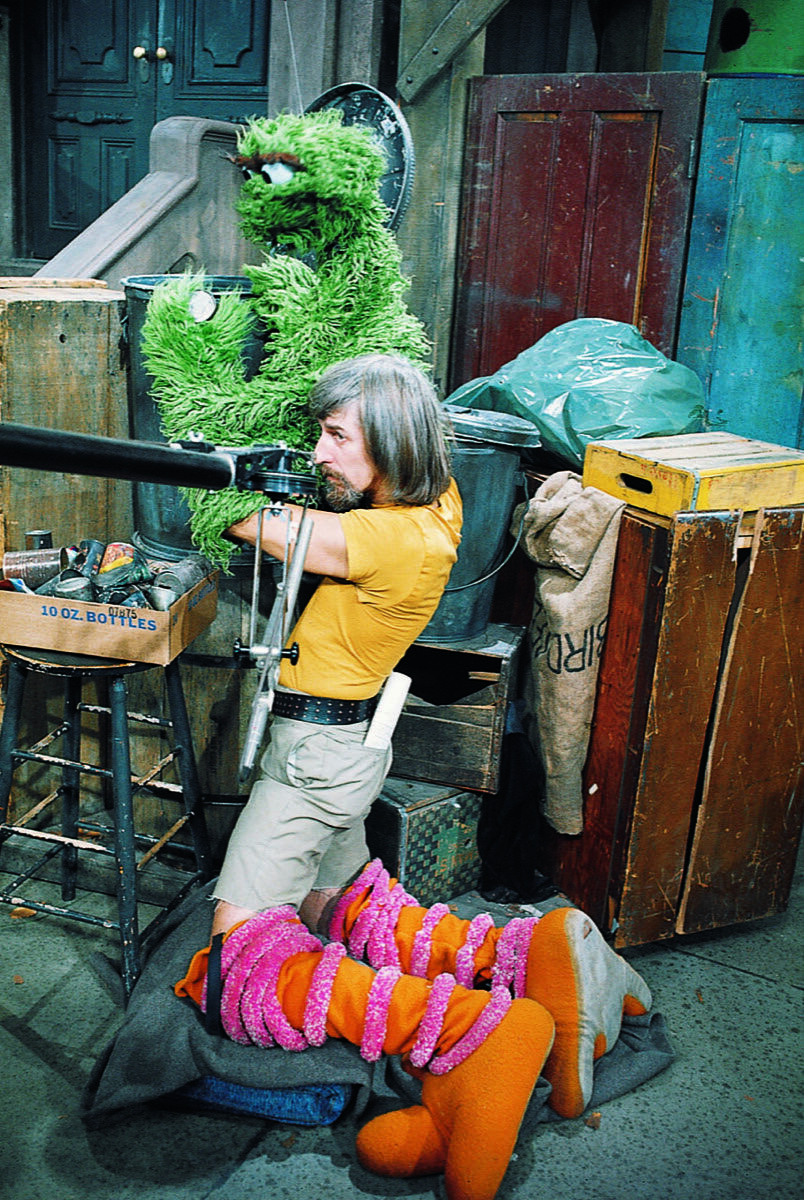 Advertisement
The exhibition features one of the original Big Bird puppets, made in 1975. It is a magnificent object designed by Love, constructed from miscellaneous materials: turkey, ostrich, and coq feathers; cotton, nylon, wool, and silk; reticulated foam, latex, ultra suede, and neoprene; and wood, steel, fishing line, and rattan boning. According to Love’s longtime partner and collaborator, Christopher Lyall, the designer was very particular about how the Bird appeared. His feathers were dyed yellow and then sewn on upside down to give him a slightly ruffled appearance. New Big Birds were created whenever an old costume became worn or damaged by outdoor exposure; for example, Big Bird’s feet were frequently stained by grass at his yearly appearances at the White House Easter Egg Roll in the 1970s and ’80s. A new costume, according to Lyall, took almost three weeks to finish.
When Big Bird moved, feathers occasionally drifted off his coat. Love imagined him to be, in his words, “not unlike a tree shedding leaves in the fall.”
Love, who designed costumes for the New York City Ballet and Orson Welles’s Mercury Theater during his career, considered Big Bird to be a person in his own right, even when he wasn’t inhabited by Spinney. On a trip Love and Spinney took to Beijing with Big Bird in 1973, the designer insisted that his creation have his own seat on the plane. Big Bird, perpetually 6 years old, paid only half price for his ticket. 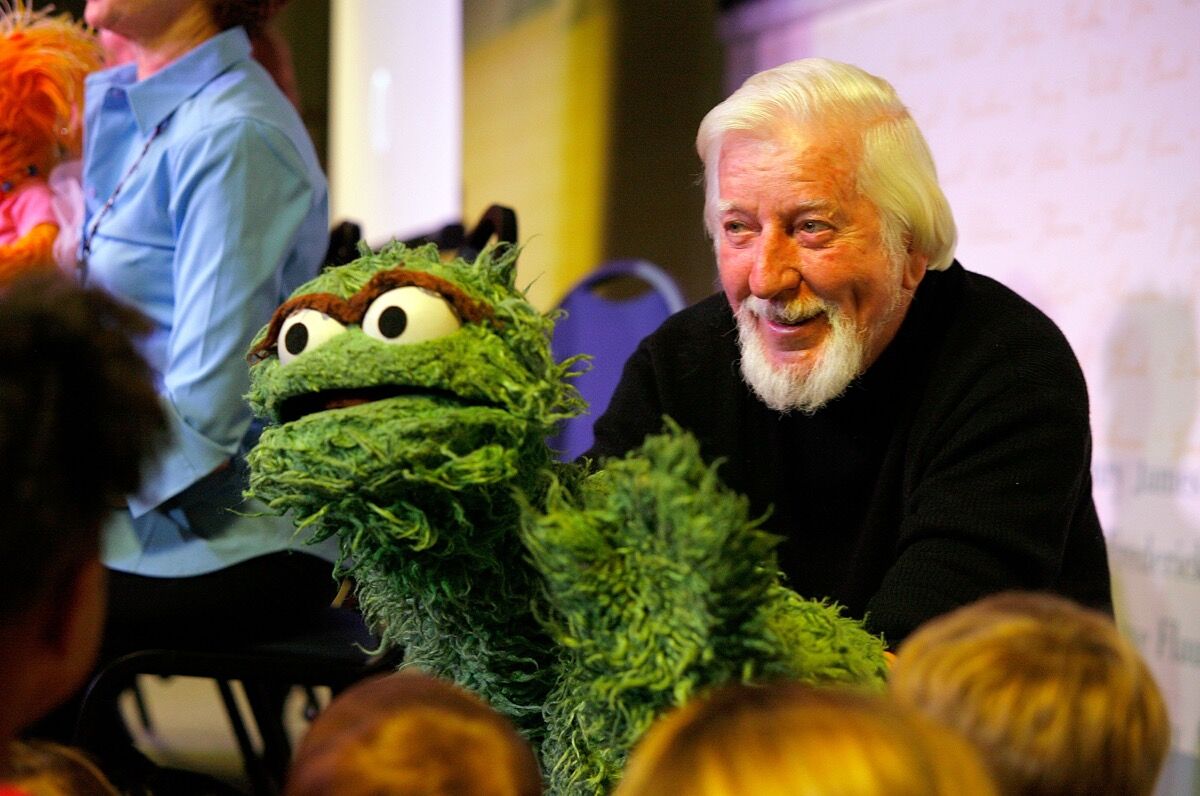 Caroll Spinney at a promotion for Sesame Street: A Celebration of 40 Years of Life On The Street. Photo by Andy Kropa/Getty Images.

What one forgets about Big Bird is just how tall he is—8’2”, to be exact. In order to play him, the 5’10” Spinney had to climb inside of his body and extend his arm as high as it could reach to move its feathered head—he controlled the character’s eyes with a pinky finger. While in costume, Spinney moved around the set with the help of a harness, a radio transmitter, and a small monitor that showed him where he was walking. In a New York Times article announcing his retirement, Spinney described the experience as “very lonely.”
It’s a wonder that Big Bird is not scarier to my daughter. Recently, we brought her to Lowe’s, where a large goofy dragon blown up for Halloween caused her to scream in fear. But every time Big Bird walks on the screen, she says, “Oh, Big Bird!” as if he’s a beloved friend.
Barbara Miller, the curator of the Jim Henson exhibition at MOMI, thinks this is because Big Bird embodies a child’s perspective in a room. “There’s this strange combination between the giant-ness of the bird and the sweetness of his character that somehow captures how a child feels,” she says.
When the show was first created in the late 1960s, researchers weren’t even sure that young children had the attention span to watch television. They did. But, Miller says, “the kids lost interest if the puppets weren’t in the scenes.” 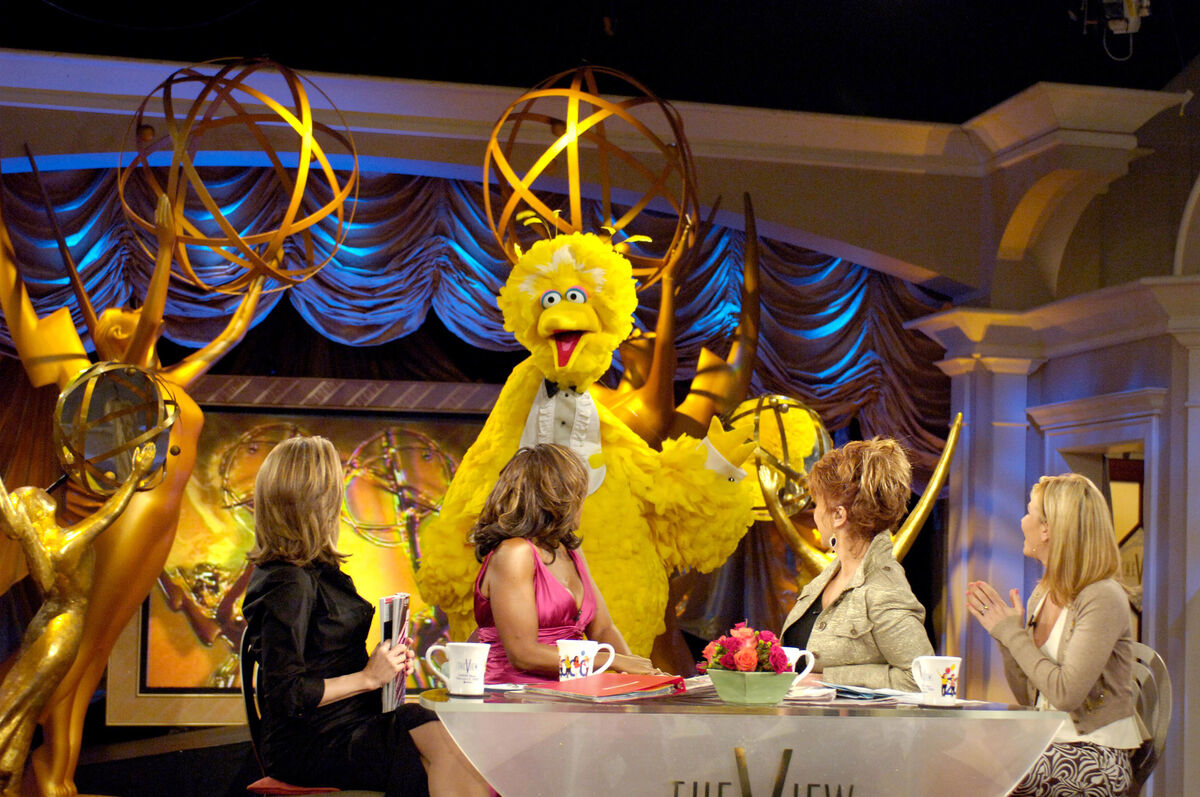 What Sesame Street has taught generation after generation of parents is the importance of imagination to learning. Yes, you can teach your children to be kind through your own actions, but they might very well learn it better from an 8-foot-tall, bright-yellow bird whose hairstyle reminds them of their Nana’s perm.
In a highlight reel released by Sesame Street upon news of his retirement, Spinney references a quote from Henson about “leaving the world a better place than it was” when he was born. “I thought, ‘That’s a pretty good and decent thing to think.’” he says. Because of the millions of kids who tuned in over the years, he continues, “I can feel that it is probably a little bit better of a place than if Big Bird hadn’t been there.”
Lovers of the show need not fear that Spinney’s retirement will mean the end of Big Bird and Oscar the Grouch. Going forward, Big Bird will be performed by Matt Vogel, who has apprenticed under Spinney since 1996, and Oscar the Grouch will be performed by Eric Jacobson, who also plays Grover, Bert, and Guy Smiley. Big Bird’s character may change in subtle ways, but hopefully his core, ensconced by layers of feathers, will remain eternal and unchanging.
Brienne Walsh
Related Stories 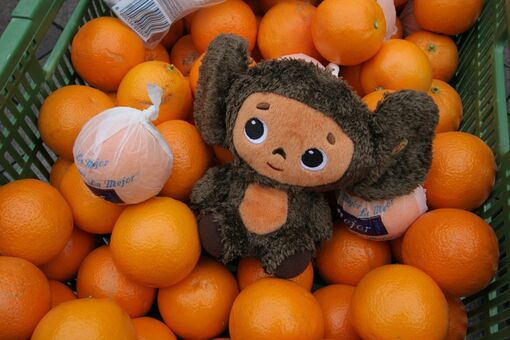 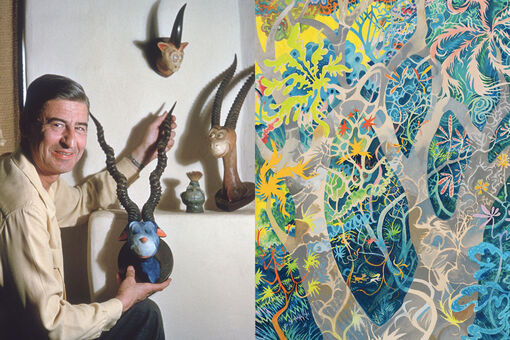 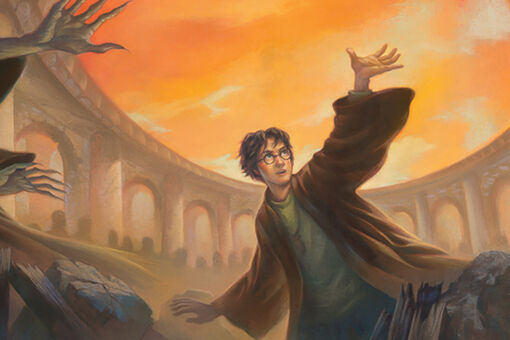