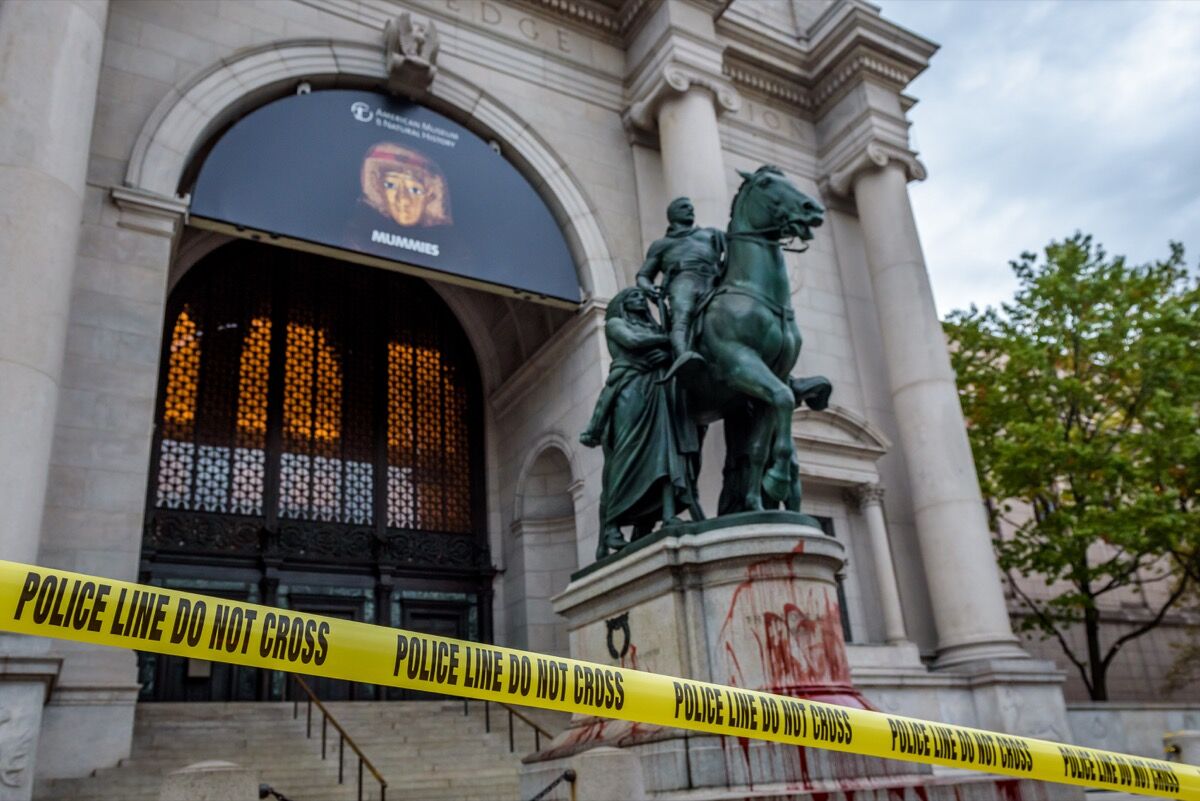 The statue of Theodore Roosevelt outside the American Museum of Natural History in New York was covered with a blood-like substance by activists demanding its removal on October 26, 2017. Photo by Erik McGregor/LightRocket. Image via Getty Images.

The past month has been a period of reckoning for museums and art institutions across the United States and beyond, as a deluge of open letters was released, calling on museums big and small to confront their pervasive cultures of racism. From Dismantle NOMA’s demands to undo “the plantation-like culture” at the New Orleans Museum of Art, to Decolonize Latinx’s call for Latinx art institutions “to name anti-Black racism and begin the work of establishing new practices that resist and reject white supremacy”—and related efforts by current and former staff at SFMOMA, the Smithsonian’s National Museum of African Art, the Art Institute of Chicago, the Guggenheim Museum, and elsewhere—the drive to address and act against the ills and racial disparities in the art world is rightfully gaining momentum. Now the question is: How will museums respond to these resounding calls for change?
In this watershed moment—spurred by the massive uprisings and protests in response to the killings of George Floyd, Breonna Taylor, Ahmaud Arbery, Tony McDade, and too many others—we have seen institutions responding to these demands with some urgency. On June 21st, after years of ongoing protests from activist groups such as Decolonize this Place and the Monument Removal Brigade, the American Museum of Natural History in New York finally decided to remove the statue of Theodore Roosevelt from the museum’s front steps. For many, the monument symbolized white violence perpetrated against Black and Indigenous bodies. Earlier last month, across the pond, the statue of 18th-century slave trader Robert Milligan was removed outside the Museum of London Docklands in response to community outcry. Days before, protesters tore down a statue of slave trader Edward Colston in Bristol.
While these actions are surely steps in the right direction, they only scratch at the surface of the long-standing problems of racism and inequality that have historically plagued cultural institutions. Many are asking for more enduring and structural changes that address issues of racial equity and diversity, as opposed to cosmetic gestures of performative allyship and virtue signaling.
Last week, in response to a series of internal demands, the Metropolitan Museum of Art released a list of 13 commitments the museum plans to implement immediately to create “a more open, welcoming, and equitable institution.” The Met’s plan addresses many of the demands in an open letter penned by For the Culture 2020, a group of New York City museum workers committed to an anti-racist agenda across all museums. Included in the Met’s plan are commitments to hire a chief diversity officer (CDO); require anti-racist and anti-bias training for trustees, employees, and volunteers in the next year, and every year thereafter for employees and volunteers; hire Black, Indigenous, and people of color (BIPOC) candidates to department head and senior leadership roles; and implement a pipeline of BIPOC individuals, specifically from historically Black colleges and universities (HBCUs), for internships, fellowships, and permanent positions, just to name a few. Not listed, however, is a commitment to support the movement to defund the police by ending all the museum’s contracts with the NYPD, as outlined in For the Culture 2020’s open letter (and as some other museums have done).
The Met’s plan is not perfect, but for now at least it sets a solid benchmark for what cultural institutions can do to meet the moment. It also raises an extremely important and related issue: how to keep these institutions accountable for their words. Many, like the members of the Collective Action Working Group—a cohort of Met employees who wrote an open letter that served as the catalyst for the museum’s response and action plan—have been down this road before. According to Artnet News, the group stated that its members “personally experienced dismissal, silencing, or erasure by speaking up about structural racism and/or individual racial, accessibility, gender, and sexual bias,” even though the museum had implemented a diversity and inclusion strategy in 2017. 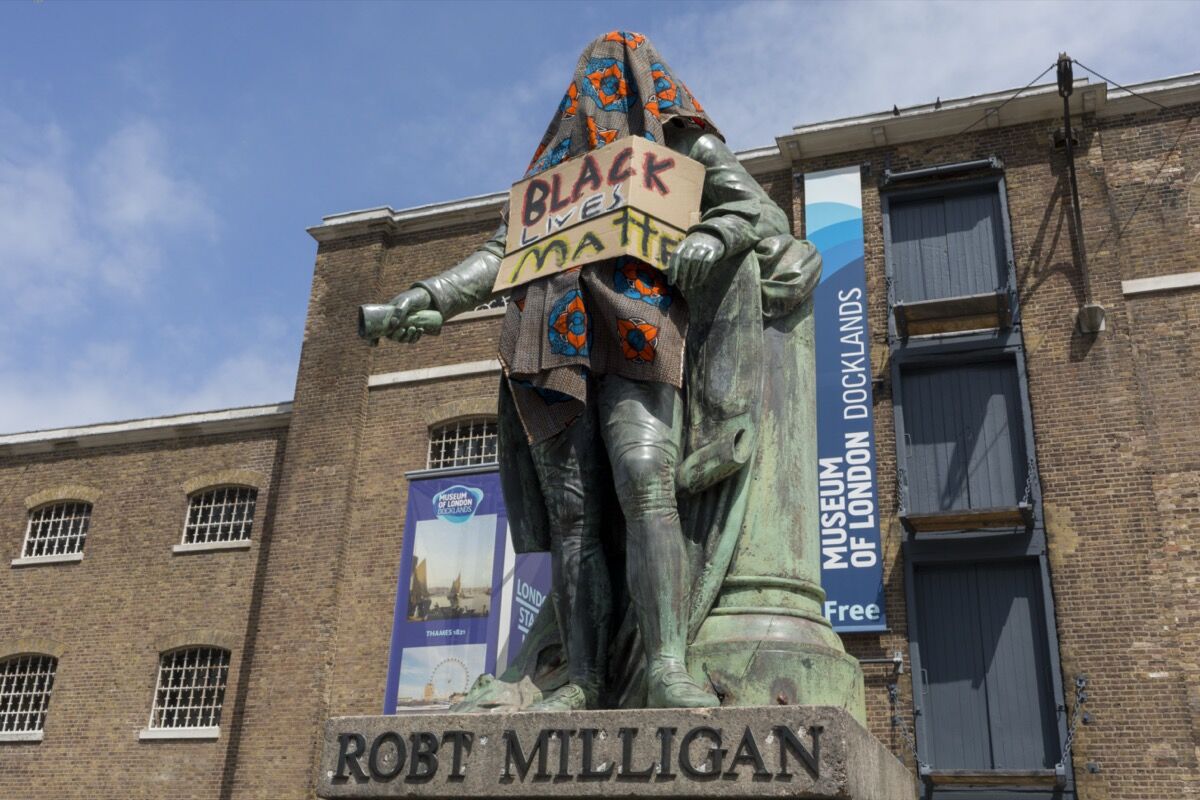 In a recent webinar hosted by the Association of Art Museum Curators Foundation and Art Fund, “Beyond Statements: Taking Actions,” panelists Sepake Angiama, Monica O. Montgomery, Sara Wajid, and moderator Sandra Shakespeare discussed this idea of accountability head-on, offering different strategies and ideas for how museums can back up their statements with action.
Wajid, who is head of museum engagement at the Museum of London and a founding member of Museum Detox, called for the creation of a regulatory body for funding museums and picking trustees, and a dedicated organization representing museum audiences that would have real influence over the decisions made by institutions. Montgomery, co-founder and strategic director of Museum Hue, similarly emphasized the need to look to existing cultural institutions and activist groups that have already put in the work to keep museums accountable. Bringing groups such as For the Culture 2020 and Dismantle NOMA into the conversation and involving them in the decision-making process would be a good start, she said.
“It’s not just about decolonizing the museum,” said Angiama, who serves as artistic director at the Institute of International Visual Arts (Iniva) in London, but putting “communities at the center,” while also honoring social justice movements to help implement the internal changes that need to take place.
Advocating for those internal changes must go hand in hand with looking honestly and critically at the power structures undergirding the entire museum industry. “Art institutions are formed through the academy, and at the heart of its teaching are the remnants and legacies of white supremacy,” LeRonn P. Brooks, the associate curator for modern and contemporary art collections at the Getty Research Institute, told me recently. “Many white curators and art historians have never had Black peers or Black teachers, and many are using their position of influence to double down on their whiteness—the very foundation of white supremacy in art history and the academy.”
He added, “As an associate curator at the Getty Research Institute, I’m in charge of building collections—of collecting the materials to study. My goal is to challenge the field of art history. I’m looking to make those kinds of changes within the archival research practices—which is significant. Protest matters. Structural change, hiring practices, and diversity matter. But are you hiring Black, Indigenous, and people of color and empowering them to actually make the structural changes that have to be done?”
In other words, we not only need to hold museums accountable, but also hold ourselves accountable for the changes that need to take place in every part of the art world.
Terence Trouillot
Related Stories