After a Quarter Century in Bali, Ashley Bickerton Shows New York He’s as Irreverent as Ever 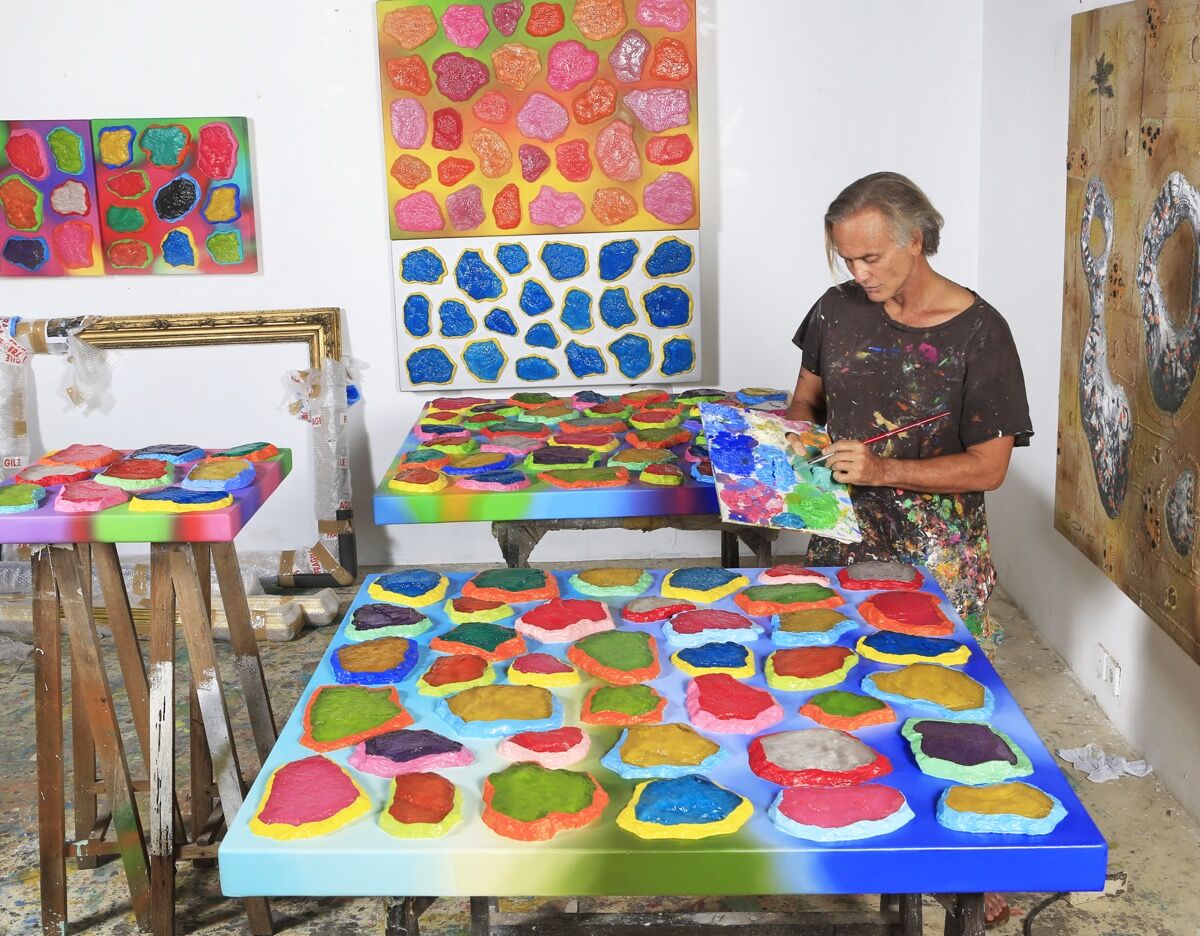 Portrait of Ashley Bickerton in Bali. Courtesy of The FLAG Art Foundation.

Nearly three weeks before we met up,
Ashley Bickerton
arrived in New York a self-described “meditating, deep-breathing, raw-vegan yogi,” but, he says, “little by little things fall off, it all starts to unravel, and the next thing you know you’re pouring yourself some cheap, screw-top wine and picking up pastrami sandwiches from a deli on the fly. New York has a way.” Bickerton, who embraces change, even when it’s not in his best interest, says this without regret—it’s merely an observation about the city he lived in for 12 years before decamping, in 1993, for Bali, a location more conducive to surfing.
The move was pivotal. Previously he had been seen as one of the
Neo-Geo
artists (a somewhat ironic term meant to signal that these artists were emphatically not
Neo-Expressionists
), along with
Jeff Koons
,
Haim Steinbach
, and
Peter Halley
. By moving to the Indonesian island, where he reared his two children, Bickerton became for many an archetype of the wildman expat, a contemporary Paul Gauguin turning out mixed-media works that often veered sharply from his earlier, conceptual pieces. Now in his 59th year, with a round face and chin-length blondish hair snaking down from under a tweed cap, Bickerton resembles a thinner, healthier version of another island exile, Marlon Brando. He wears a souvenir T-shirt reading, Fuck You You Fucking Suck. 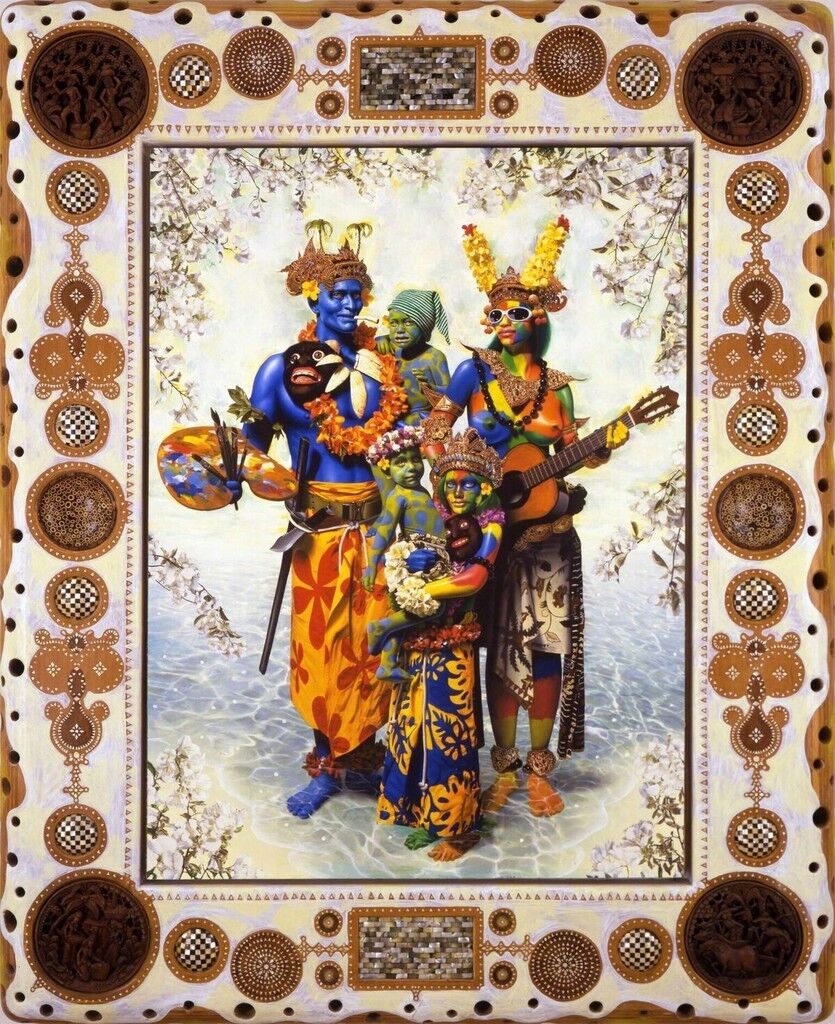 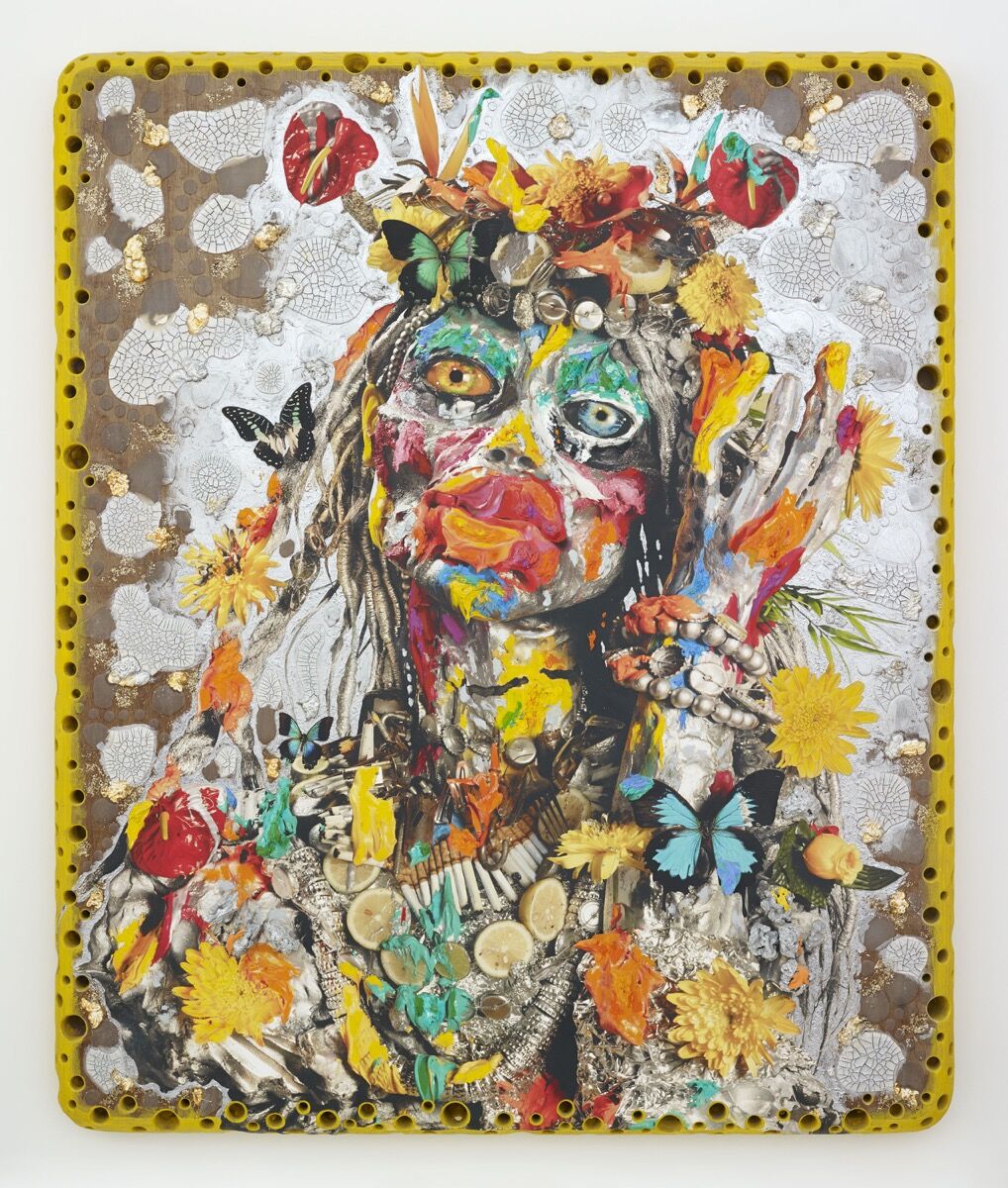 In an attempt to regain nutritional balance, the artist is scarfing a salad at the FLAG Art Foundation, where his first U.S. retrospective is on view through December 16th. Another retrospective, at the Newport Street Gallery in London, closed in August, and so one might expect to find the artist in a reflective mood. A few days earlier, a film crew had forced him to tour his old neighborhoods. “They were trying to find things that meant something to me,” he explains. They failed. “I live in the future,” he says. “I don’t live in the past. Occasionally there’s odd things. Here’s one odd thing: If you try to figure out how to get somewhere, you get lost. But if you just start walking, muscle memory kicks in and you suddenly find yourself there. And you look down at your arm, and it’s suddenly this jaundiced yellow color, and there’s a mixed-race child holding onto your hand, and you go, ‘I guess some years have passed. Things have happened.’”
As an artist, Bickerton is far less concerned with what has happened than with what is happening. Indeed, he is temperamentally incapable of nostalgia, in part because that sentiment entails seeing things as having a single meaning, fixed in time. He wants to discuss a work at the FLAG, the iconic Good Painting, of 1998, in which logos and symbols—yin-yangs, peace signs, the presidential seal and that of the United Nations—decorate the outer face of a stylized packing case. “The whole point is that it doesn’t mean one thing, nothing does; everything can mean a million things,” Bickerton says. “I’ve always thought hypocrisy is a great philosophy. It’s always worked for me. It’s very flexible.”
The yogi-surfer-artist values flexibility. His oeuvre ranges from highly conceptual contraptions to florid, hyper-sensual pictures that freely mix painting, photography, sculpture, even performance. Perhaps because Bickerton eschewed chronology in curating it, the show at the FLAG makes clear that, despite his zigging and zagging, certain themes do abide in his work. Consider, for instance, a piece from this year, Water Vector 1, which resembles that early logo piece. Here, the logos appear as mere abstract outlines etched onto glass, beneath which he has arranged bits of plastic and other worn beach detritus into a wave pattern. 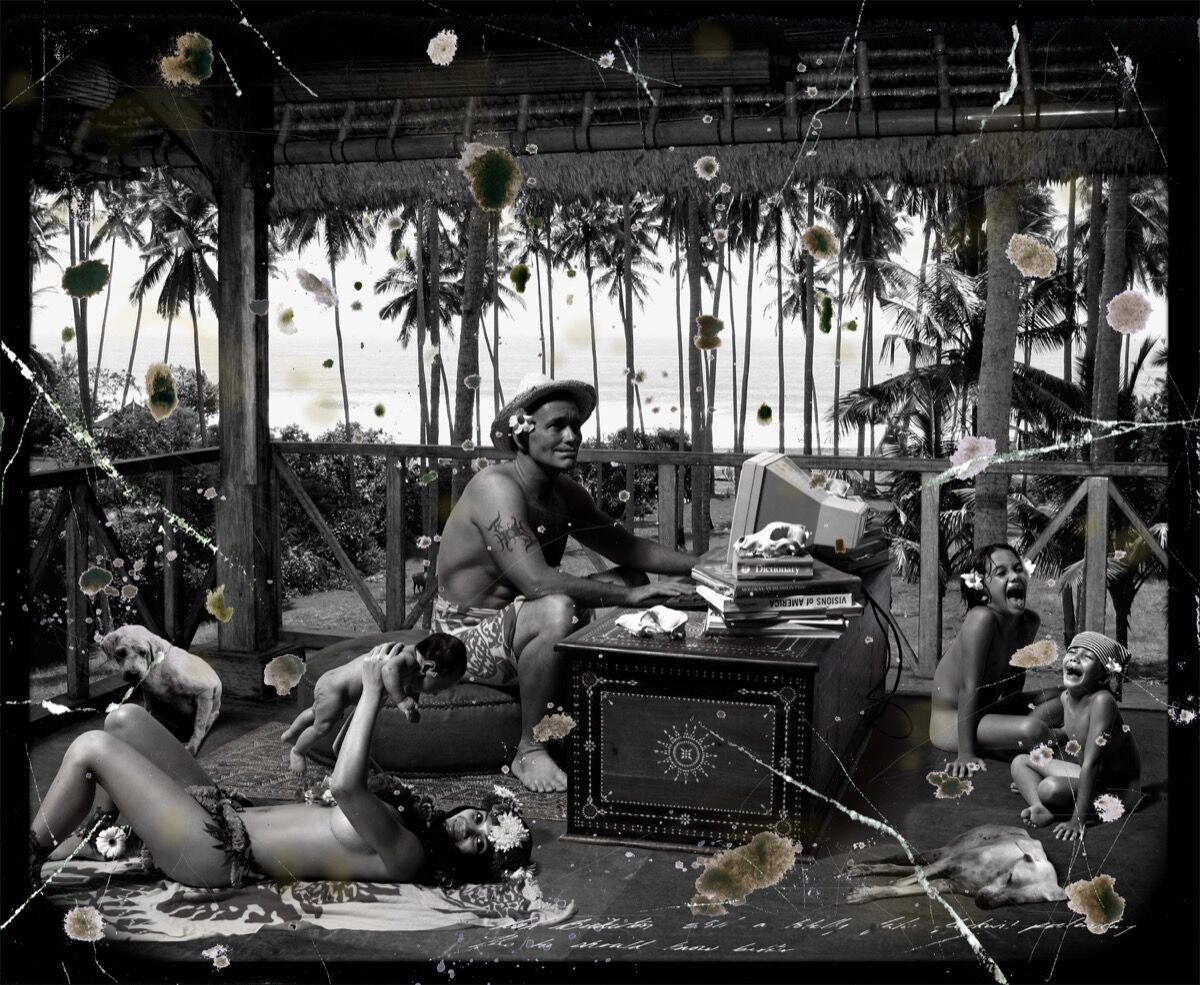 Advertisement
References to water appear so often that he admits he could be considered a marine artist. Yet, as Water Vector 1 suggests, Bickerton doesn’t focus on the ocean, that giant symbol of change, for its own sake, but rather for what it portends and what it disgorges. Tropical suns do not set over tranquil seas in his work: Instead, there are sharks and bleached corals and floating escape pods. Bickerton is a beach-roaming artist who gathers the sea trash of our global culture and gleefully reads it for signs, much the way a Roman haruspex read the entrails of slaughtered animals.
What that sea offers up most consistently are, of course, commercial products, and Bickerton has been examining them from the very start of his career. In the 1980s, he felt that what he, Koons, and Steinbach were up to was more accurately termed Commodity Art, a label his peers rejected. “What the fuck else were we doing?” he asks. “We walk around with these things in our pockets”—he holds up an iPhone—“but it came in a box, and when you take it out it becomes a utilitarian thing. Before you start putting fingerprints on it, when it’s in a perfect state…Steinbach and Koons isolated that object.” In presenting products as pure potential—to be sculpture, to be design, to be traded, bought, or gifted, before their meanings are congealed by use—these artists “nailed the spirituality of our time,” he says. Bickerton was also insistent that art itself be seen as a commercial good, not solely an object of contemplation; he dedicated one show to Robin Leach, of the TV show Lifestyles of the Rich and Famous from the 1980s and ’90s, and incorporated price tickers into some of his pieces, displaying their value as it rose.

Acknowledging that art is also a commodity is for Bickerton a matter of honesty and of preserving art’s potential, not pinning it down to be any one thing. In the ’80s,
Donald Judd
’s boxes were, he says, “discussed in terms of a vessel that held God. But what was it in the end? It was a fucking name brand. These things are traded in some pissing contest amongst oligarchs. How can you discuss meaning without discussing that? Discuss the whole bloody house. Don’t just discuss
Frank Lloyd Wright
’s gorgeous, ineffable lines: Discuss the fucking cat litter, discuss the hair in the carpet, discuss the sewage system, discuss the rip-off of the Pennsylvanian contractor, discuss the mad woman in the attic, discuss the body in the rose garden.”
One of the reasons Bickerton would be as keen to talk about the dead flies accumulating at the bottom of a Judd box as readily as the void it contains is that he has a horror of narrow aestheticism. In other words, his expansive view of the discussion around art extends also to its creation. Stroll through the FLAG Foundation and you’ll find an artist attempting to capture as much of his experience as is possible: from S&M fantasies lithographed on wood to an abstract arrangement of colored circles and monochrome gizmos, from a mural of contemporary symbols to a painting of a woman crouching down to piss. “If you invent a language, you’ve got to apply that language to the larger world. I want to be able to talk about shit. I went on a four-day opium bender in the hills of Laos—I want to talk about it. I had a tryst in Egypt, with two people! I want to talk about it. We’ve got this odious swirling orange mess in the Oval Office, I want to be able to talk about that. I want my work to move. But it also doesn’t have to make a point, because I’m not sure artists stand for truth and justice. I don’t know if I have that responsibility either—sometimes you do. Sometimes it’s just, ‘I want to re-litigate my relationship with that bitch who ruined my life.’”
Bickerton is a political artist and an autobiographical artist, and also neither. Which is to say he won’t do what he says so many artists do, “variations of one pattern that is a logo for the brand that is your name.” This willingness to allow any topic, no matter how low or discordant, into his work, to follow whatever twisted road presents itself (he thought about calling his London retrospective “No Wormhole Uninviting”), has, he realizes, not bolstered his market status. He shrugs. His personality is too ranging to be tied down to a signature style. Or even to a signature. As Bickerton points out, an artist’s name is his brand. Yet rather than reinforce that brand with one pattern of work, one logo, he has consistently bent the very notion of identity into pretzels of significance. Installation view of Ashley Bickerton at The FLAG Ar Foundation. Photo by Steven Probert.  Courtesy of the artist and Lehmann Maupin, New York and Hong Kong. 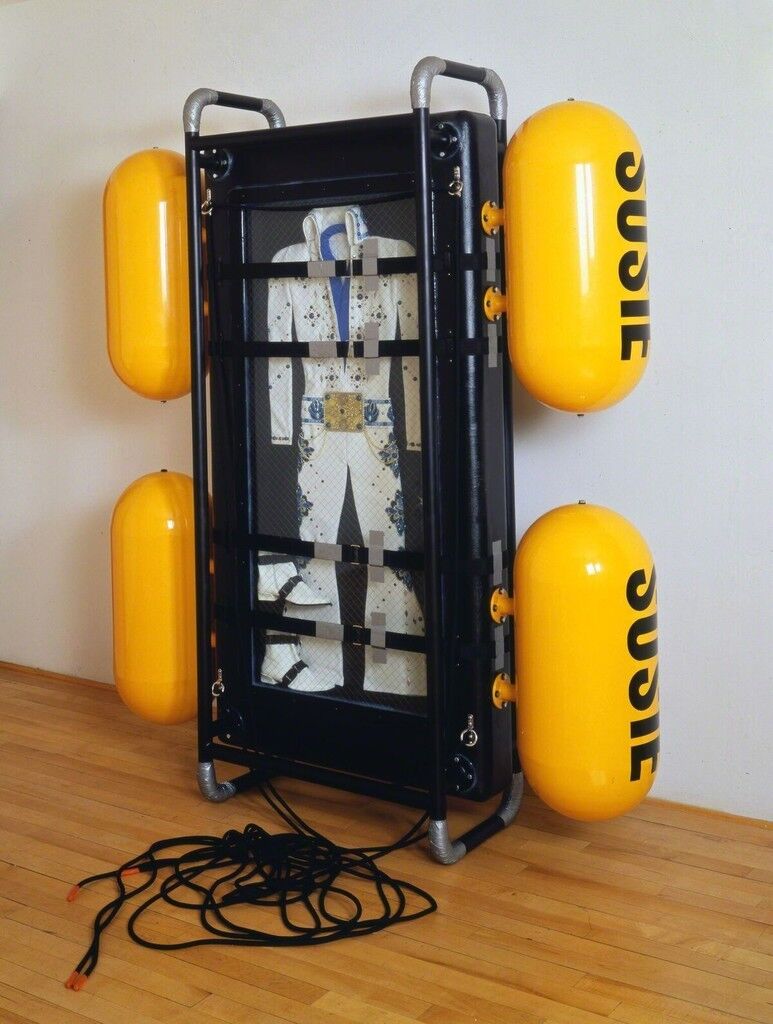 Ashley Bickerton
Seascape: Floating Costume to Drift for Eternity III (Elvis Suit), 1992
The FLAG Art Foundation
Being flexible about identity comes naturally to a man who was born in Barbados to British parents, holds U.K. and U.S. passports, lives in Indonesia, and thinks of Hawaii, one of the places where he resided as a child, as home. Propped against a wall at the FLAG you’ll find a work from 1992, Seascape: Floating Costume to Drift for Eternity III (Elvis Suit), a glass-enclosed case (or escape capsule, as he thinks of it), with an Elvis suit strapped down inside and four yellow tanks for buoying it, each inscribed with the name Susie. He began tagging his work with the moniker (short for “Susie Culturelux”) a decade earlier, right out of art school, as a way of pointing out—and skewering—the branding function of the artist’s name. He chose Susie because it is a feminine diminutive, the opposite end of the color scale from the big names of the century,
Pablo Picasso
or
Jackson Pollock
. Yet another logo piece, this one mocking his and
Vincent van Gogh
’s self-regard, is titled Tormented Self-Portrait (Susie at Arles) (1987–88).
Famili, 2007—the title is Malay for family—spoofs the pretensions of Bickerton’s own multiculturalism. In it the artist, his skin painted blue, stands with a palette in one hand and a crying child (its skin a mix of green and blue) in the other. He sports a lei, an Indonesian crown, and a sarong with a Samurai sword. Next to him stands a bare-breasted island woman with vivid, multi-hued skin, wearing sunglasses and strumming a guitar. A younger woman, with the same brightly mottled pigmentation, poses before her, holding another child. Yes, it seems to say, I may be acting like a surfer-boy Gauguin, but we’re all playing dress-up in the end—and I want to talk about that.
In New York, Bickerton tells me that his “contemporaries all hang out with racial and gender types that fit their general profile. My people are all ages and all colors. That’s where I come from: in flux.”
Daniel Kunitz
Related Stories