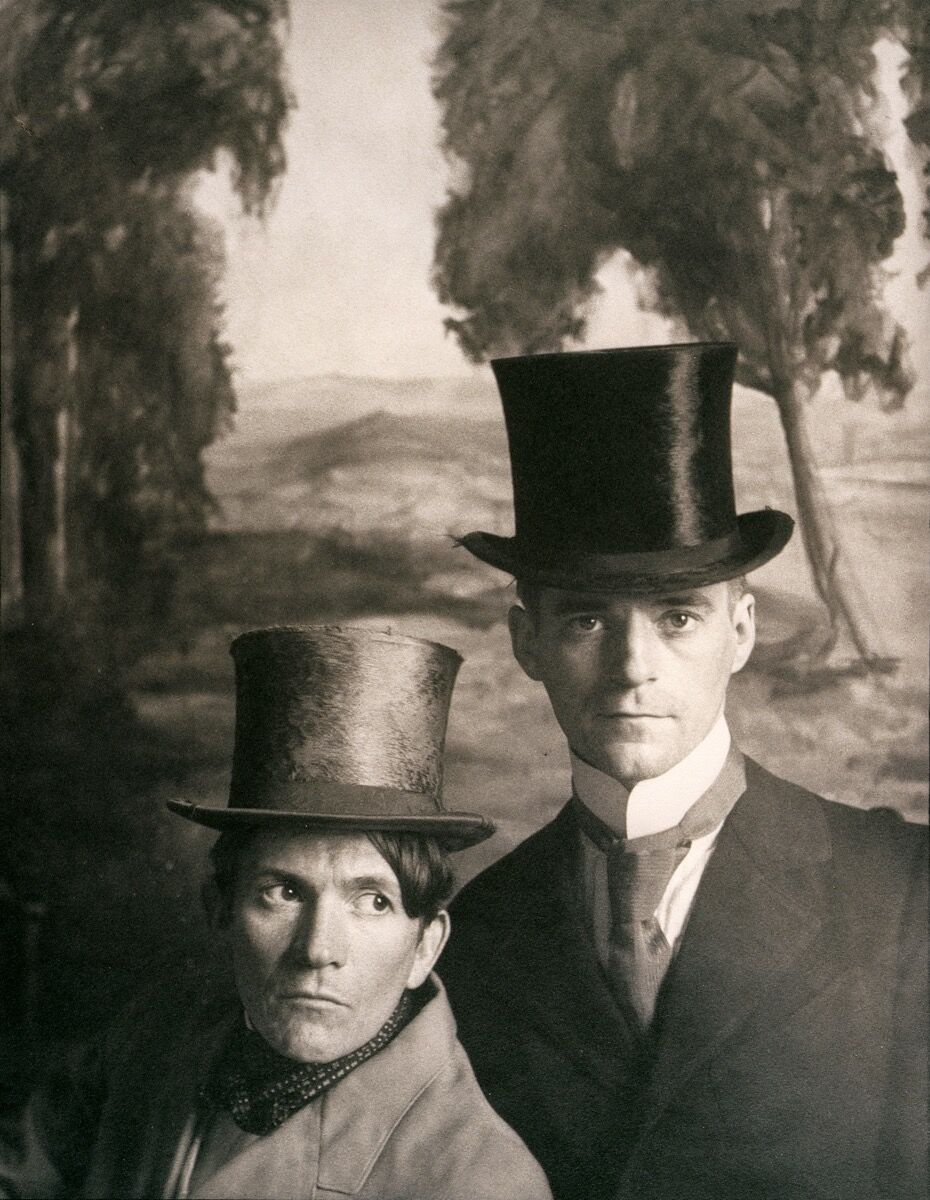 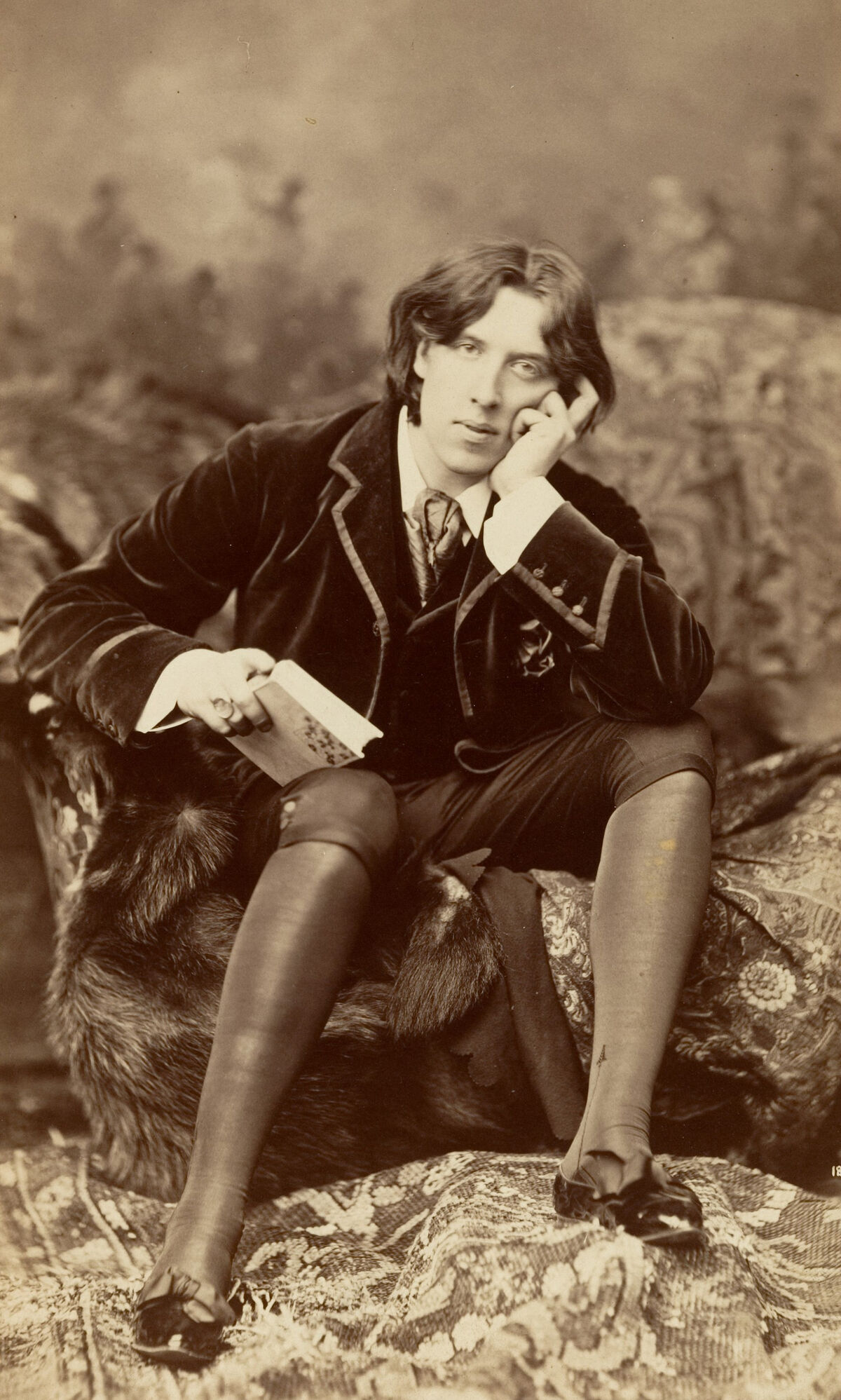 It’s hard to imagine being gay in Victorian England. But the queer Irish author Oscar Wilde’s wealth and fame generally exempted him from the Victorian era’s strict social mores. He was popular for his sharp, humorous plays, foppish persona, and masterful wit. Yet he also spent considerable energy advocating for a progressive social agenda that included women’s suffrage and the freedom to be openly homosexual—and he would ultimately be imprisoned for committing the crime of gay love.
Today, Wilde’s tragic decline is another haunting anecdote from the encyclopedia of gay struggle. And as often as we invoke Wilde’s image as a celebration of proud flamboyance, his death acknowledges the brass tacks of living a vibrantly queer life: It can be dangerous. Today, the New York- and Ireland-based artist duo
David McDermott and Peter McGough
have reified this existential problem in Wilde’s legacy, literally enshrining his story in a new installation, The Oscar Wilde Temple, located in a church in Manhattan’s West Village.
Upon entering the space, visitors find a first assembly of portraits depicting historical LGBT figures, many of whom championed gay rights or were otherwise killed because of their sexuality and gender identity. Paintings of gay icons and activists Marsha P. Johnson, Harvey Milk, and Xulhaz Mannan become constellations of martyrdom adjacent to the installation’s main event: the hagiography of Wilde. They illuminate the twisted heritage of queer advancements and reactionary violence against those advancements. It is a footnote on how the queer community must often rejoice and suffer in equal measure. And the dim mood lighting of the temple recalls that of a funerary chapel, creating an atmosphere of meditation and mourning. The Victorian fabric covering many of the temple walls is florid but altogether muted in a silent, muddy palette. Votive candles in purple-tinted glass dot the temple’s landscape, asking us to remember the dead.
Turning to McDermott and McGough’s main focus, the deification of Wilde, we see a variety of mementos and devotionals. Paintings, sculptures, and quotations argue for Wilde’s foresight and forbearance on queer history. The most elaborate of these examples is Oscar Wilde Altarpiece (2017), which depicts Wilde as a kind of Roman god or Catholic saint. Wilde stands in his iconic Victorian dandy garb, hands clasped and chin pushed slightly up to confer a sense of grace. He is perched above his prison number from Reading Gaol, C.33, in a triumphant yet relaxed posture.
Just behind the figure, a stained-glass image of Jesus peers into the temple, his image beckoning viewers to connect Wilde’s narrative to a number of Christian martyrs who willfully died for what they believed in. This sly juxtaposition makes a case for Wilde’s sanctification as the unofficial icon of queer suffering. McDermott & McGough, The Stations of Reading Gaol (I. Arrest of Oscar Wilde.), 1917, MMXVII. Courtesy of the artists. 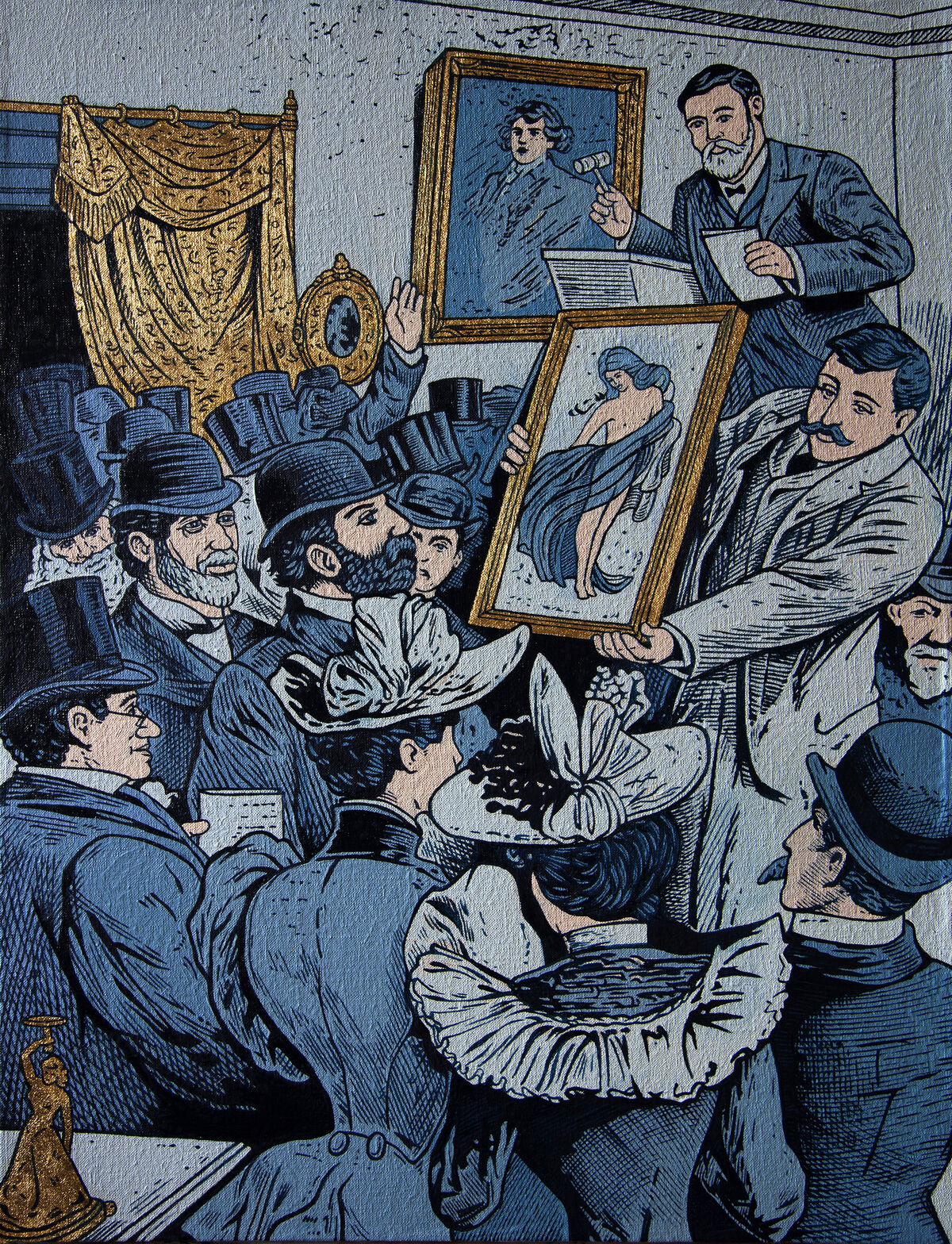 McDermott & McGough, The Stations of Reading Goal (I. Sale of Oscar Wilde's household effects.), 1917, MMXVII. Courtesy of the artists.

Advertisement
Unfortunately, the temple’s main artistic event—the seven oil paintings dispersed throughout—disrupt the otherwise contemplative and subdued Victorian setting. McDermott and McGough’s The Stations of Reading Gaol (2017) illustrate Wilde’s trial, imprisonment, and release, but their aesthetic difference here unspools the installation’s overall coherence. Their style fuses the cartoonish, monochromatic flatness of a comic book with the posturing iconography of sainthood—complete with the requisite golden halo.
The effect of these paintings—which lack emotional depth—hinders the dramatization of Wilde’s life. Why not follow through with a tribute to Wilde that’s more aligned with the wild sufferings and passions of saints within Catholic imagery? Why choose to depict a stoic Wilde when he’s known for his effervescence? McDermott and McGough’s desire to foster revelation and reverie would be better served with, well, a good dose of revelation and reverie. It’s difficult to imagine a chastened and quiet Wilde, even in his darkest hour.
In 1895, when Wilde was charged with gross indecency and homosexuality by his lover Lord Alfred Douglas’s father, the dandy wordsmith refused all recourse of escape to France and embraced his trial, setting himself on a path toward martyrdom. He sacrificed his chance at legal defense to take the stand and elegantly argue for the virtuous nature of homosexuality. “It is that deep, spiritual affection that is as pure as it is perfect,” he proclaimed. “It dictates and pervades great works of art like those of Shakespeare and
Michelangelo
.” 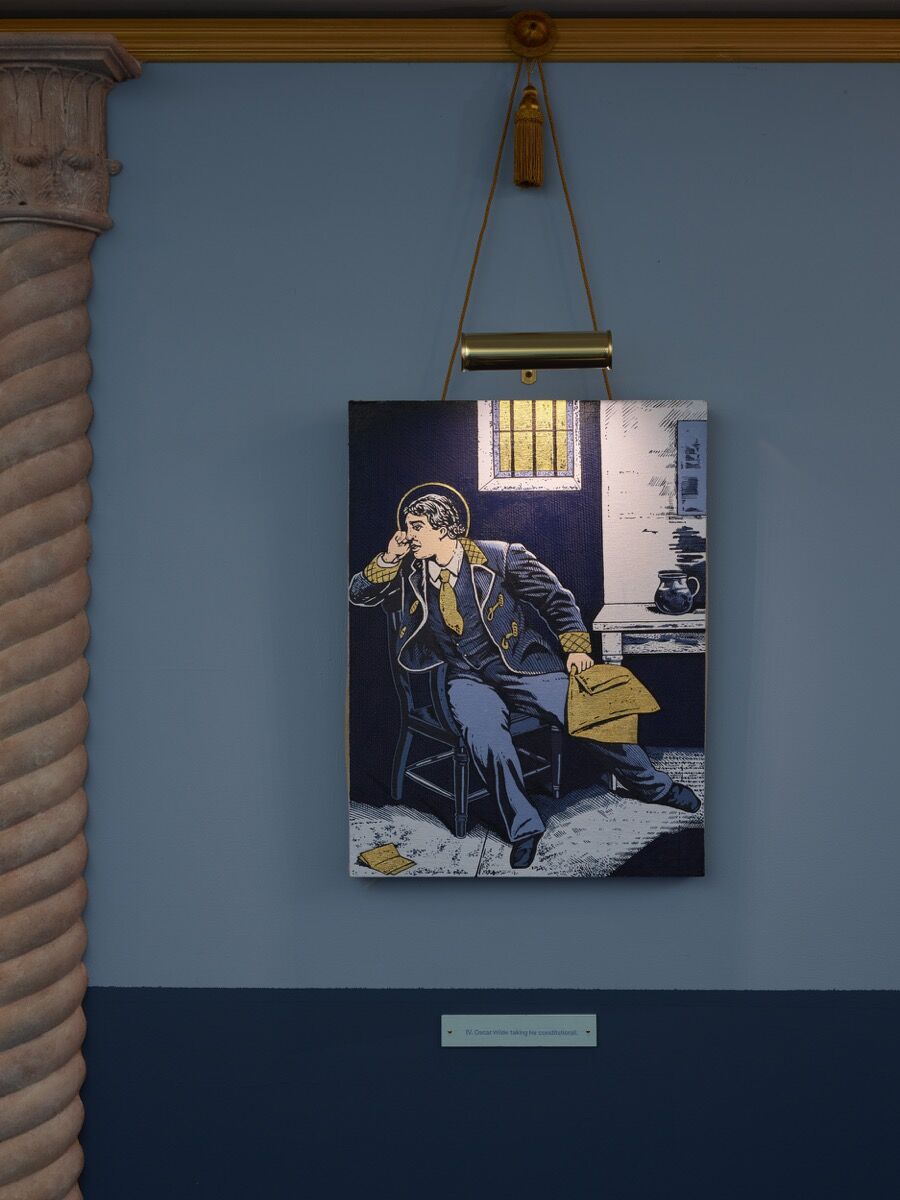 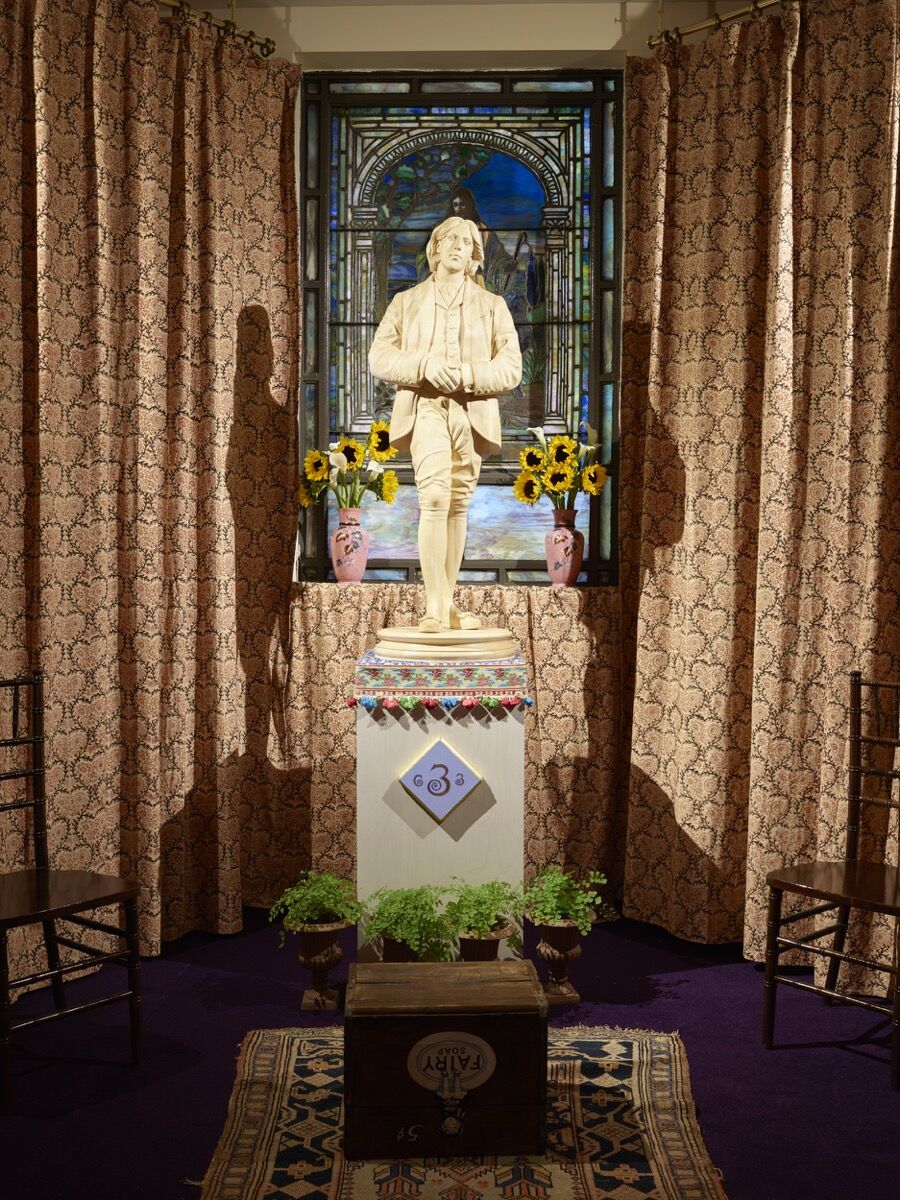 Despite the Temple not quite capturing Wilde’s character, it feels important and timely. McDermott and McGough’s project comes as reported hate crimes against members of the LGBT community soar. And the location of their temple holds massive significance. Presented in the Russell Chapel of New York’s Church of the Village, the Temple builds upon the West Village’s history of inclusion and gay activism. The church is one of New York City’s more radical Christian outposts, playing a prominent role in the community’s history of gay activism.
In 1973, the United Methodist church was the site of the founding chapter of PFLAG, formerly Parents and Friends of Lesbians and Gays. The temple may not directly reference this nugget of history, but it does commemorate the exclusion of two of the church’s ministers who were effectively forced out of the pastoral ministry in 1977 and 1984 for being gay: Rev. Paul M. Abels and Rev. C. Edward Egan, respectively.
Accordingly, the church will also use The Oscar Wilde Temple as a space for programming, events, and even gay weddings—a gesture at honoring its championing of gay rights while reckoning with those tragic moments in history. 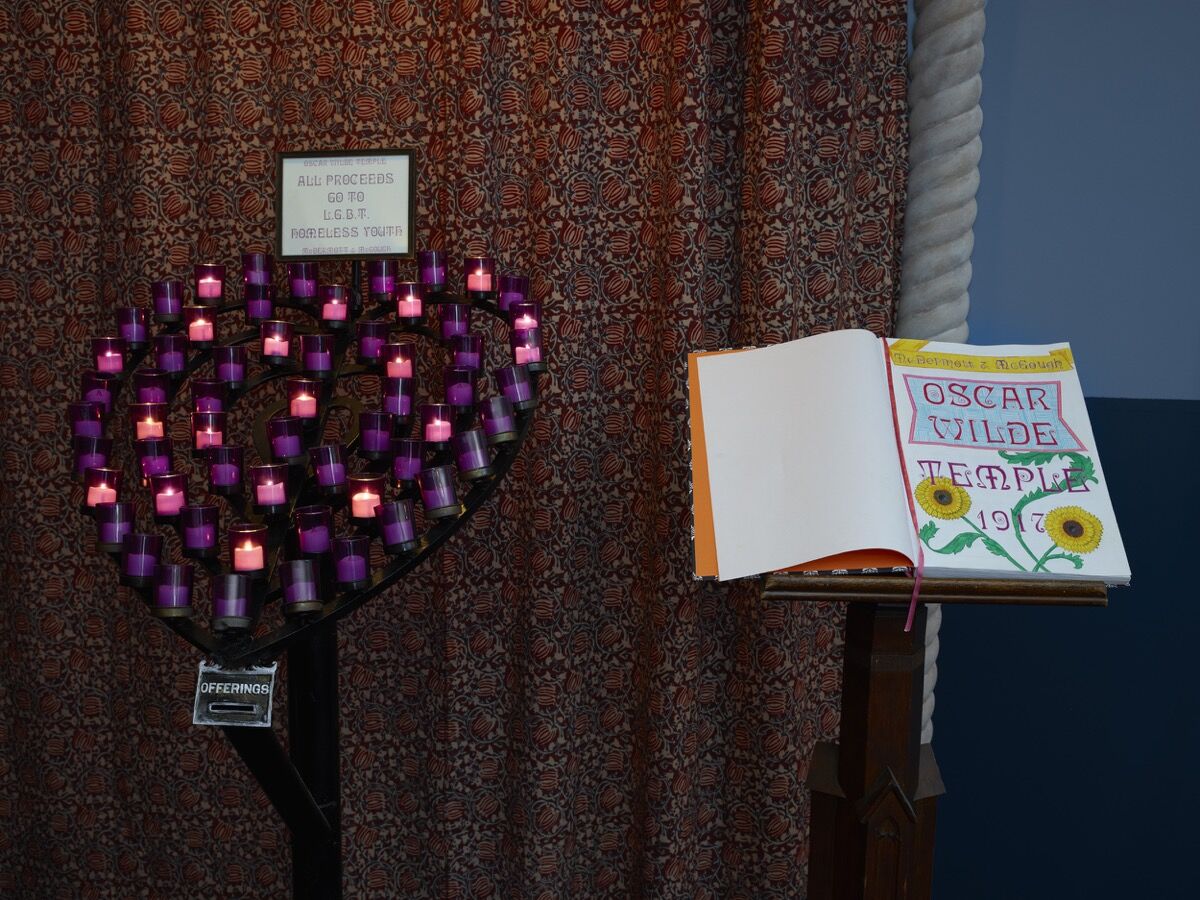 Oscar Wilde book of remembrance. Courtesy of the artists.

The watershed nature of this installation requires a little license for its abrupt aesthetic shifts. And maybe that’s part of its appeal—art whose primary goal is to foster community and remembrance.
The history of gay liberation is astonishingly short. Many would argue that it began less than 50 years ago in 1969 with the Stonewall Inn riot in Greenwich Village. By enshrining the deeds of Oscar Wilde, however, McDermott and McGough gesture to more than a century’s worth of struggles, advances, and regressions. Their claim is to a longer legacy of radical queer visibility, and thus, stronger, deeper roots for the LGBT community.
Zachary Small
Related Stories