Why R. Crumb’s Provocative Drawings of Women Are an Antidote to Beauty Stereotypes 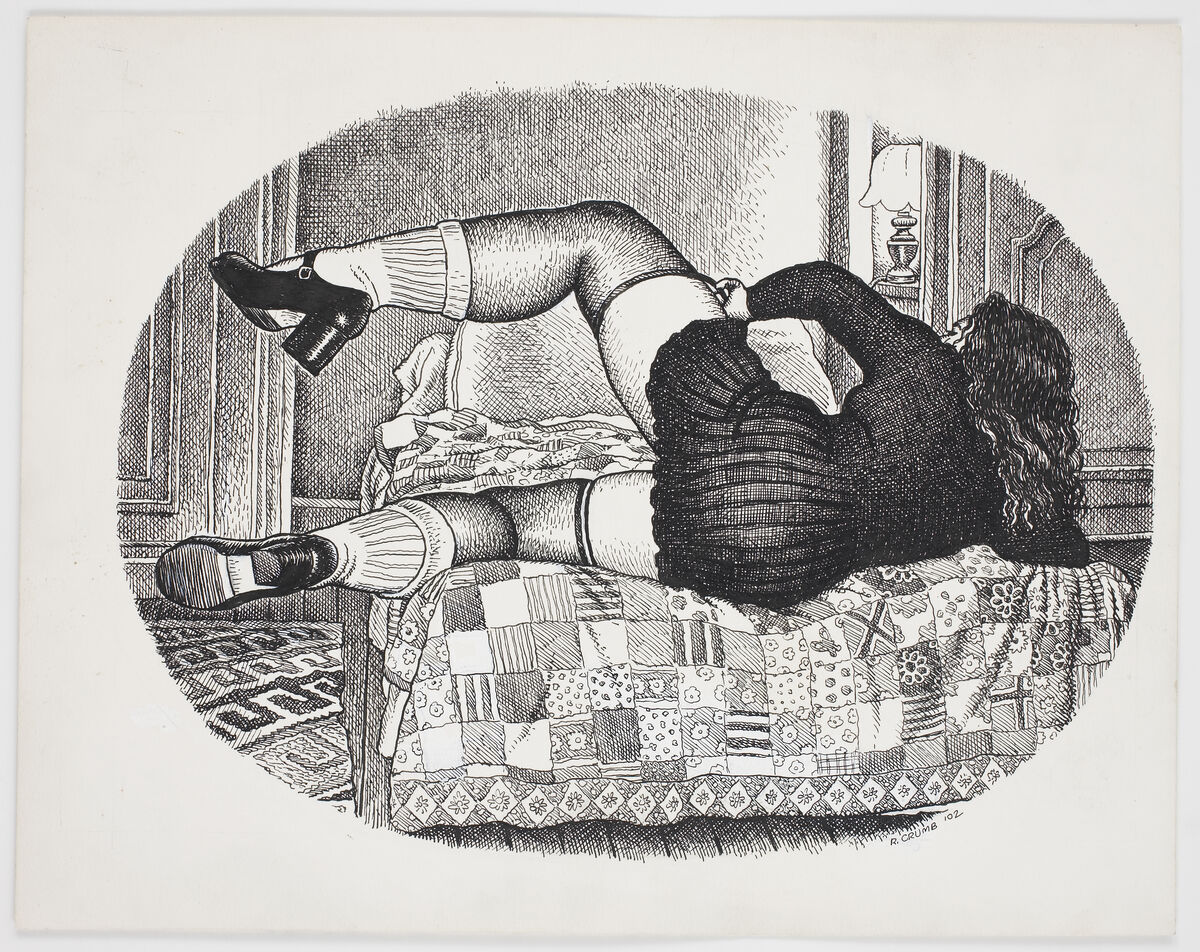 Robert Crumb
is obsessed with women. At the age of 72, the artist (who goes by the pen name R. Crumb), continues to draw them prolifically and passionately, and with the same provocative appeal as at the start of his career as a cartoonist in the 1960s. Crumb’s portrayals of women in 2016 are still deeply divisive, but they also interact in an intriguing new way with the current discourse on beauty.
At David Zwirner in Mayfair, London, Crumb’s catalogue of drawings of women from 1990 to 2016, from his “Art & Beauty” magazine series, are presented together in an exhibition, including the project’s third volume, which is now being shown to the public for the first time. The show, “Art & Beauty,” presents selected drawings from the three volumes of Art & Beauty Magazine, which was inspired by his personal collection of a 1920s top-shelf magazine of the same name. In addition to the exhibition and the release of the new Art & Beauty Magazine, Number 3 (2016), David Zwirner Books is also publishing all three volumes as a single book, Art & Beauty Magazine: Drawings by R. Crumb. 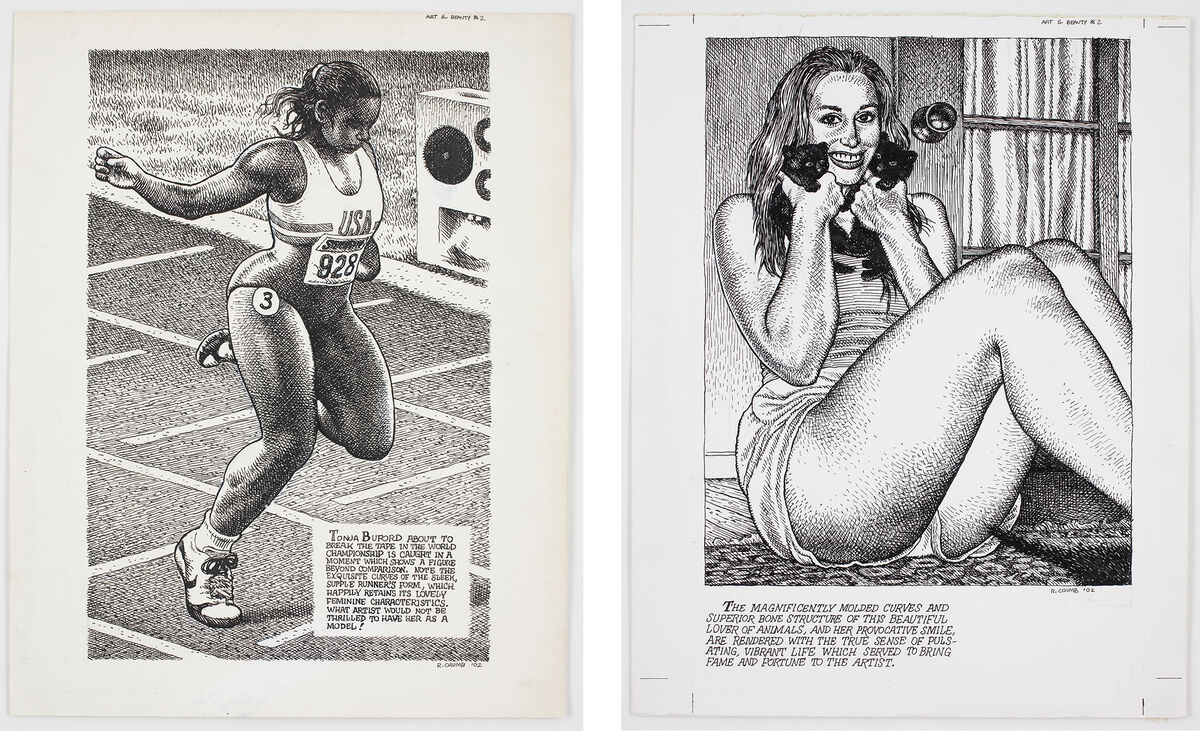 In the two decades that have passed since Crumb started Art & Beauty, the canons of female beauty have diversified, but now perhaps more than ever, our society is obsessed with policing, controlling, defining, and subduing women’s bodies. This month alone, debates have raged over portrayals of female celebrities in the media—from Amy Schumer’s rebuttal to Glamour’s “plus size” issue to Kerry Washington’s distaste for her airbrushed AdWeek cover and Jennifer Lawrence’s Harper’s interview in which she called out the film industry for its view on body types. The consumer-based economy we live in, which depends so heavily on the pressure to conform to beauty standards (no matter what they are), has hardly improved since 1990—the year author Naomi Wolf pointed out this correlation in her seminal work The Beauty Myth: How Images of Beauty Are Used Against Women. Every image we encounter of a woman’s body, it seems, has a currency in the current cultural condition. In this context, Crumb’s obsessive drawings of women hardly seem perverse.
The women Crumb has chosen as subjects for Art & Beauty Magazine over the years—including famous sports stars, his wife, and TV stars—largely haven’t changed, but an interesting addition to his references in the new volume include selfies sent to him by women. “The biggest difference for me is that Robert is now working from pictures sent to him from cell phones,” says art dealer Paul Morris, who first met Crumb in 1999. “There are certainly images like that of Coco (a reality TV star) that come from the media, but now he is working from images shot on the street. They are still very beautiful, voluptuous women, but the cast has grown immensely through technology.” These works are complicated by the fact that Crumb is now drawing from women’s own portrayals of themselves. Advertisement
Looking at the works of “Art & Beauty,” there’s no doubt that, for Crumb, drawing women is still a turn-on. He intentionally sexualizes his muses—from his wife Aline, to famous athletes like Serena Williams and Tonja Buford-Bailey. They do not conform to a prescribed body type, but rather via his pencil, these women are transformed into Crumb’s ideal. It’s important to remember when considering how Crumb represents these women that he is a cartoonist, and his comics are looking to amuse as much as arouse. Beyond analyzing Crumb’s unmistakable sexual fetishes, his drawings do pose a challenge to the canon of “hot” or “sexy” women in contemporary culture: His women aren’t super-skinny waifs but rather powerful, imposing figures. He has long been championing women who are solid and strong, women with thick limbs, bulging thigh muscles, and big bottoms; pictured lifting weights or eating fast food, they are still feminine and hypersexual. For example, in “Art & Beauty” one of Crumb’s archetypes, with broad shoulders and muscular arms, gently cuddles two kittens: Simultaneously conforming with feminine stereotypes and satirizing them, with a gaze that is dissident and objectifying at the same time. “I know of one drawing where Robert directly addresses feminist critiques,” Morris tells me. “In this work he basically states that he is not trying to demean women, but on the contrary he is a slave to women and his desires.”
It’s in the images captioned with Crumb’s ironic texts that broader ideas on women and the way society treats them are the most complex and tranchant. In an image from a page of the second volume of Art & Beauty Magazine (2003), a woman in a short dress and high heels gazes back at the viewer, one hand on her hip, the other on a vacuum cleaner. The text reads: “Ducky Doolittle is an eccentric New York-based performer and publisher whose bold and striking physique is thrilling to behold even in the mundane act of vaccuming the carpet.” It’s in these phrases that Crumb prods at the fallacies in traditional representations of the female anatomy throughout history—from classical art to 20th-century erotica to contemporary mass media—and they way communicate an apocryphal idea of beauty. In Crumb’s drawings the women are very clearly depicted not as they are or how they should be, but as Crumb wants to see them. Crumb’s work has never been about conforming to others’ ideals, and in pursuing his own tastes, he’s often alienated himself. “Robert really does not have a filter,” Morris explains. “What you see is a hyper-honest account of his desires and fantasies.” The curator emphasizes that Crumb’s works are expressions of love and respect, not cultural commentaries. “I know that Robert often works from images of women that he has found in popular culture, but he selects these images per his own desires. I don’t think he is looking to make a comment on all of culture. These are deeply personal choices.” Crumb’s self-reflexive captions remind us of this fact, and he has often referenced his own problematic and uneasy relationship with women and sex in his work, including his comic book, My Troubles With Women (1990). Drawing for the artist is a catharsis, a way of working out his only responses to the chaos of the world—including the developments in contemporary culture. “Considering what he has drawn from in the past, it only makes sense that in 2016 he could be inspired by a mania that has led to equipment like a selfie stick,” Morris muses.
Perhaps the way Crumb sees women is best understood through the Picasso aphorism that’s planted in a work from Art & Beauty Magazine, Number 2 (2003), under a drawing of a bikini-clad shero in a warrior pose: “...I put all the things I like into my pictures, the things—so much worse for them; they just have to put up with it.”
Crumb clearly likes women and he’ll continue to draw them in the way he wants. But his works on women give the viewer much more than an understanding of his individual sexual desire. Out in the world, with a life of their own, the bigger question these drawings pose is, how do we see women?
Charlotte Jansen
“Art & Beauty” is on view at David Zwirner, 24 Grafton Street, London, Apr. 14–Jun. 2, 2016.
Related Stories