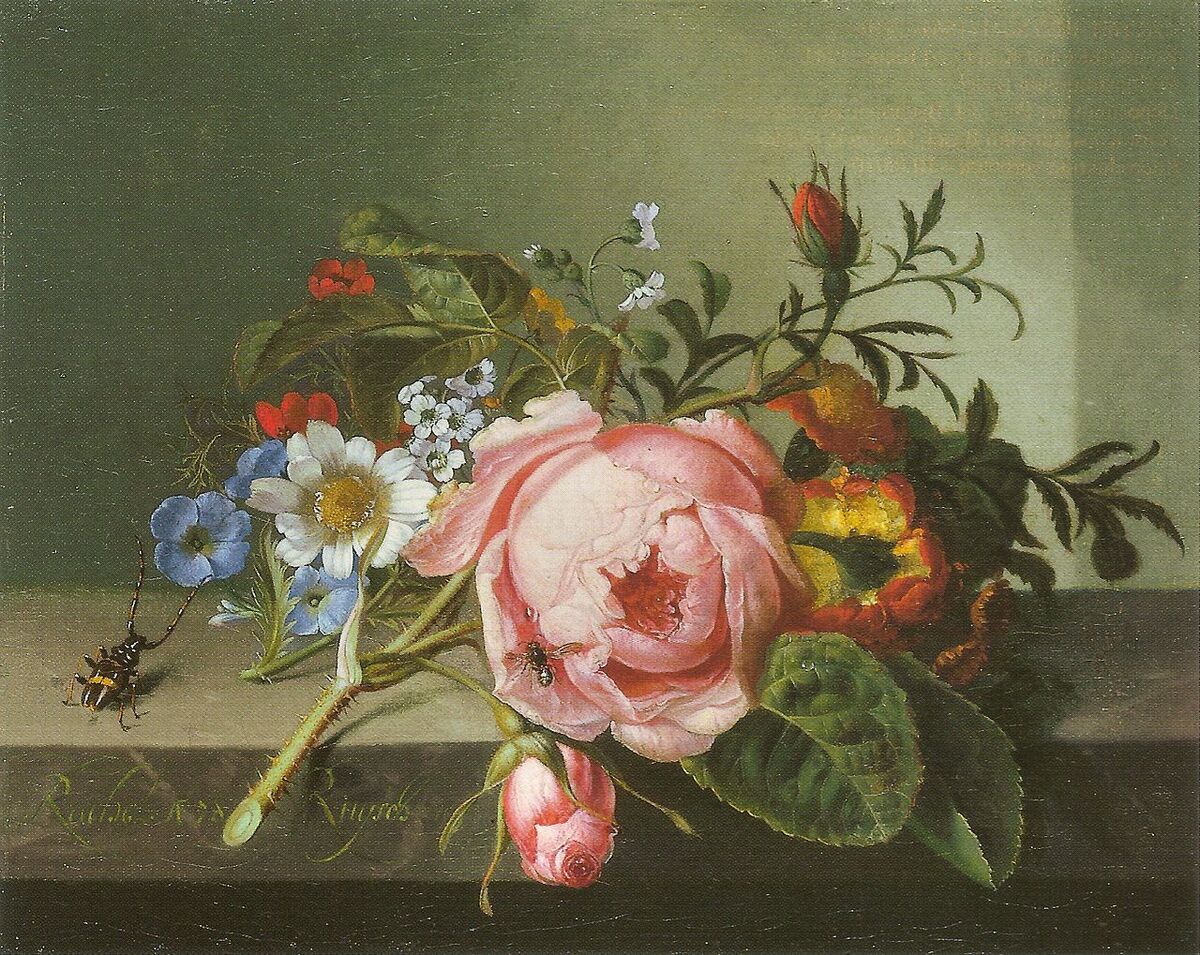 When Dolly Parton’s now-famous meme “Get you a woman who can do it all” hit the internet a few months ago, my nerdy, art history–saturated brain drifted to the 17th-century Dutch painter
Rachel Ruysch
. Recently, I’d become fascinated with Ruysch’s accomplishments and before-her-time mediation of career and family. She revolutionized still lifes, sold her canvases for more money than
Rembrandt
did, and contributed to influential scientific developments—all while raising 10 children. And that just scratches the surface of her story.
Ruysch had a unique, even bizarre upbringing that fed directly into her paintings, which featured fecund bouquets and moody, amphibian-speckled forest floors. Born in 1664, she was surrounded by both art and science from a young age. Her mother, Maria Post, came from a creative family—her father was the Dutch imperial architect Pieter Post, and her uncle,
Frans Post
, was a leading landscape painter. Ruysch’s own father, Frederik, brought the scientific chops to her gene pool. A well-known physician and botanist, he served as Amsterdam’s praelector (or college officer) of anatomy beginning in 1667, and subsequently took positions as a professor of botany and supervisor of the city’s botanical garden. His reigning achievement, though, was his famed cabinet of anatomical and botanical curiosities: a five-room collection of embalmed and wax-injected organs, animals, plants, and countless other oddities which he posed in artful, macabre dioramas (in one, a baby’s hand holds a turtle egg as it hatches). 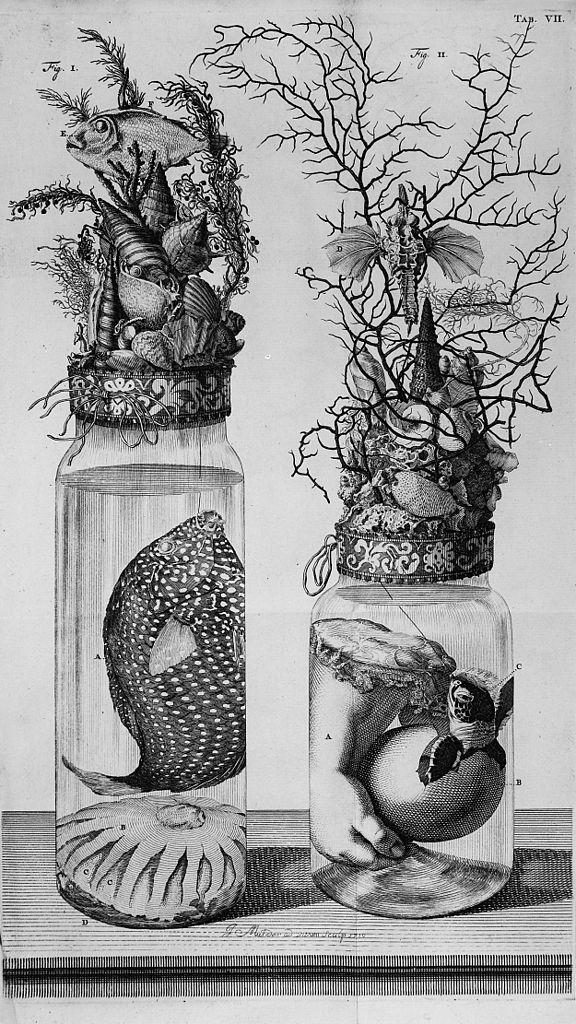 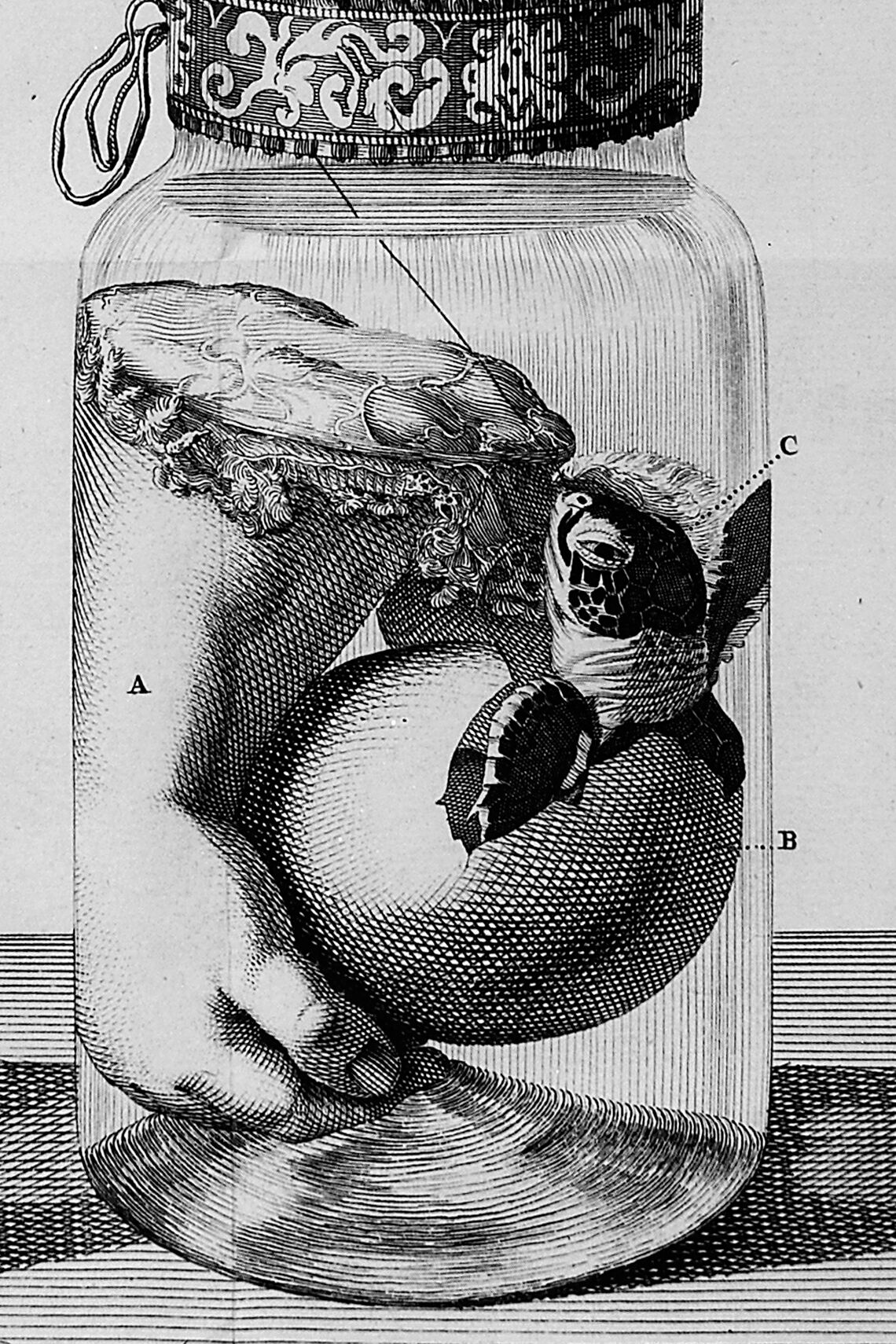 Frederik collected art, too. He was a fan of local painter
Otto Marseus van Schrieck
, who was known for his depictions of dark, fungi- and insect-glutted forest floors—a genre known as sottobosco. When Van Schrieck passed away in 1678, Frederik snapped up hundreds of preserved butterflies from the artist’s estate, along with a number of his paintings.
Growing up around these spoils inspired Ruysch to obsessively sketch flora and fauna. When she was 14, her father gave her permission to apprentice with
Willem van Aelst
, widely recognized as Amsterdam’s premier painter of still lifes and flowers. It was a rare opportunity for a young woman at the time, and over the next several years, Ruysch honed her draftsmanship skills and began to develop her own stylistic repertoire.
Her process was methodical, her brushwork delicate and exceptionally precise. As documented by historian Luuc Kooijmans, Ruysch first laid the overarching framework of her compositions and, after the paint dried, employed fine brushes to garnish them with spellbinding minutia: bug-bitten leaves; fragile, craning petals; needle-thin blades of grass; and insects boasting patterned backs and translucent wings. Sometimes she used real moss to apply paint—a technique borrowed from Van Schriek and Van Aelst—and butterfly wings to stamp her surfaces with texture. 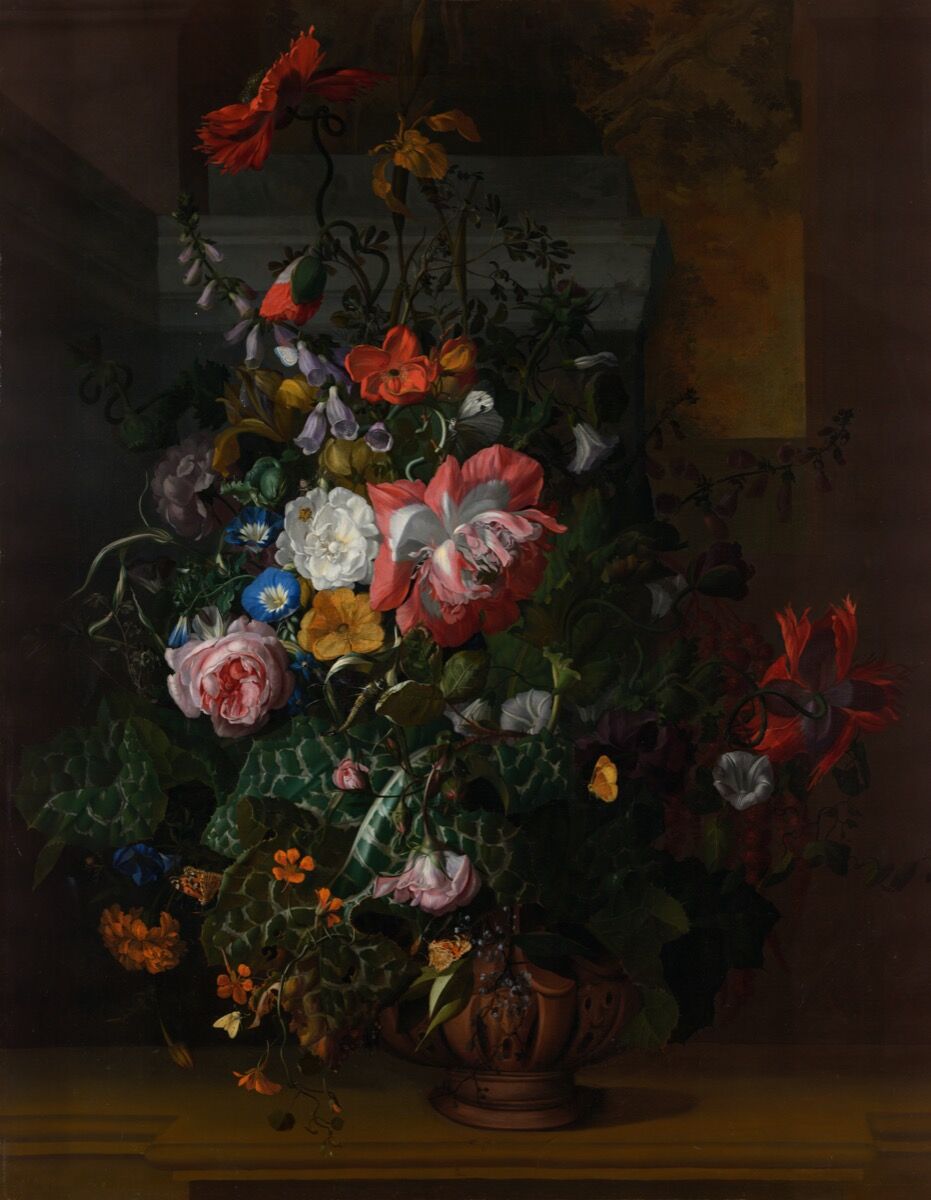 Rachel Ruysch, Roses, Convolvulus, Poppies, and Other Flowers in an Urn on a Stone Ledge, 1680s. Image via Wikimedia Commons. 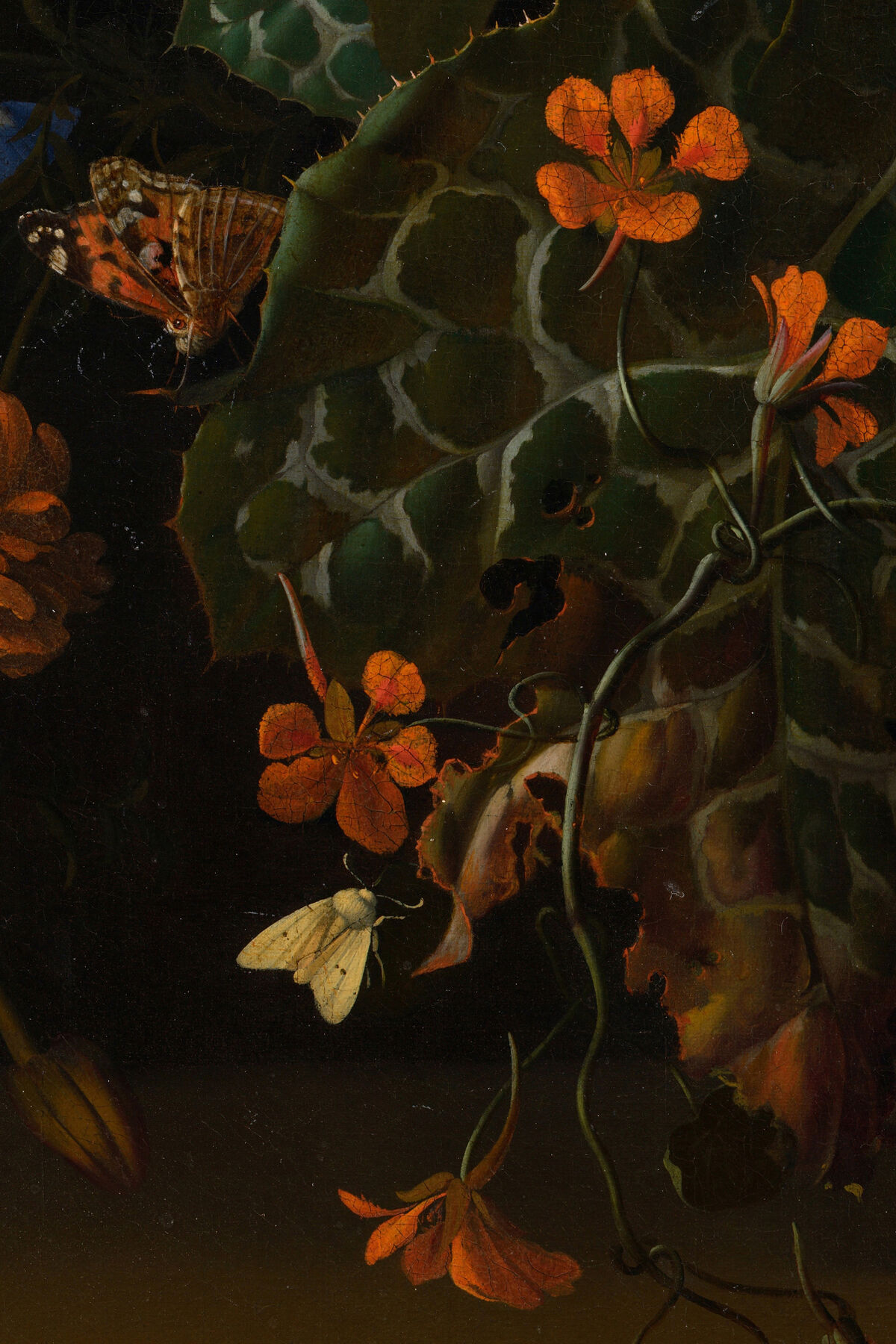 Rachel Ruysch, detail of Roses, Convolvulus, Poppies, and Other Flowers in an Urn on a Stone Ledge, 1680s. Image via Wikimedia Commons.

Advertisement
Ruysch swiftly gained a reputation across Amsterdam for the enchanting realism of the plants and insects that filled her paintings; they weren’t idealized, but rather alluded to mortality and the life cycle. Stems bowed and buds hung heavy with natural entropy. Leaves were perforated by the maws of bugs. Bees sipped from stamens, pollen-drunk and burrowing into petals.
These elements revealed Ruysch’s keen knowledge of plant and animal life, gleaned from the hours spent in her father’s collection and at Amsterdam’s botanical garden. Ruysch often painted the underbellies of flowers, revealing her intimate studies of plants from multiple angles. In the 1683 work Still life of a thistle between carnations and cornflowers on a mossy forest floor, with butterflies and a cricket, a poppy’s backside is the focus of the composition, surrounded by ready-to-burst buds and a dying carnation, its petals drooping clear to the mossy forest floor. (Recently, this painting’s poppy was reinterpreted by contemporary artist
Nicolas Party
in an exhibition titled “Sottobosco” at Hauser & Wirth.)
Less overt scientific influences also infused Ruysch’s paintings and processes. The vases she included in her floral still lifes were often translucent, like beakers or her father’s glass preparation jars, and she used Roman numerals to date and catalogue her work, a system borrowed from scientific identification. 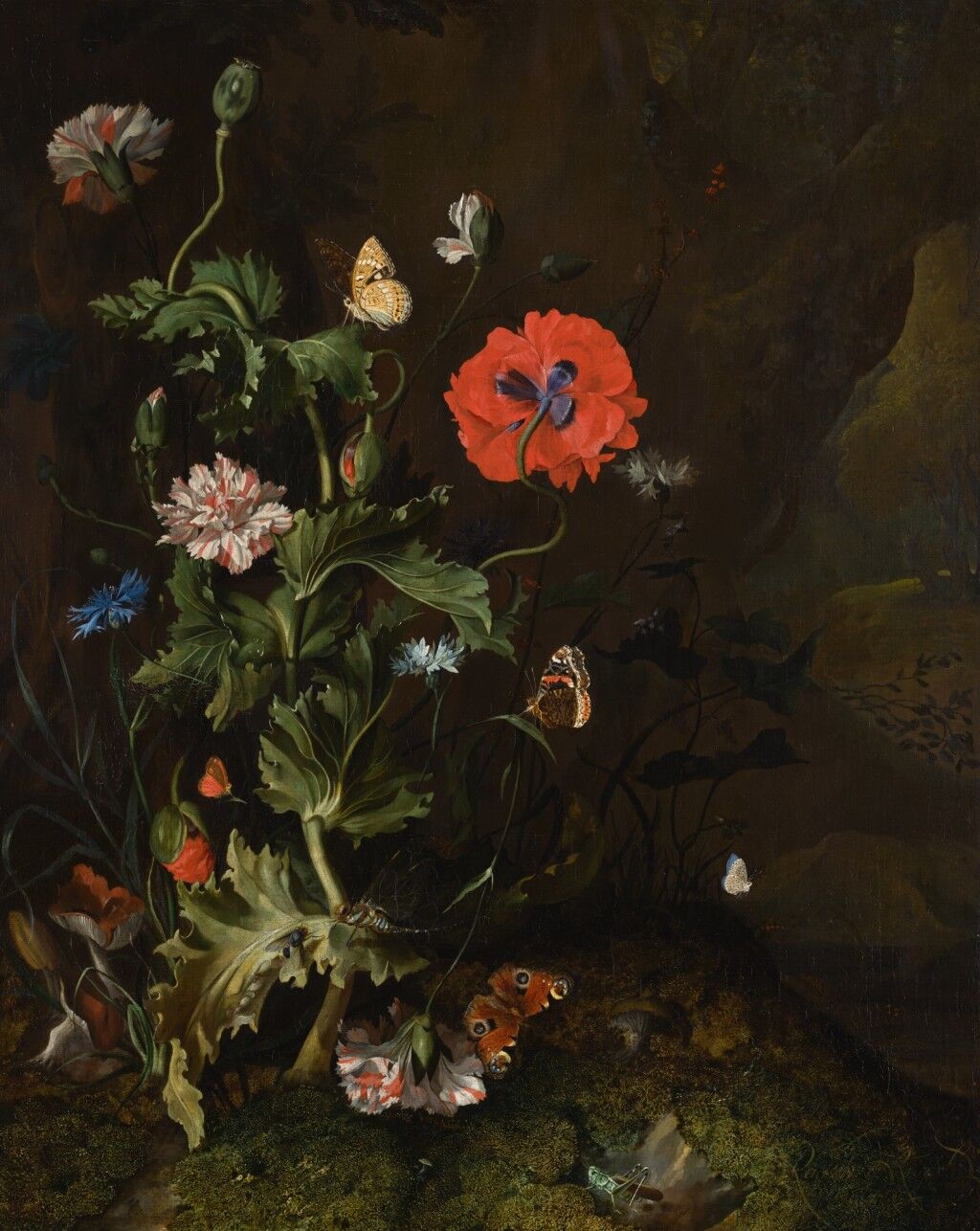 Rachel Ruysch, Still life of a thistle between carnations and cornflowers on a mossy forest floor, with butterflies and a cricket, 1683. Image via Wikimedia Commons. 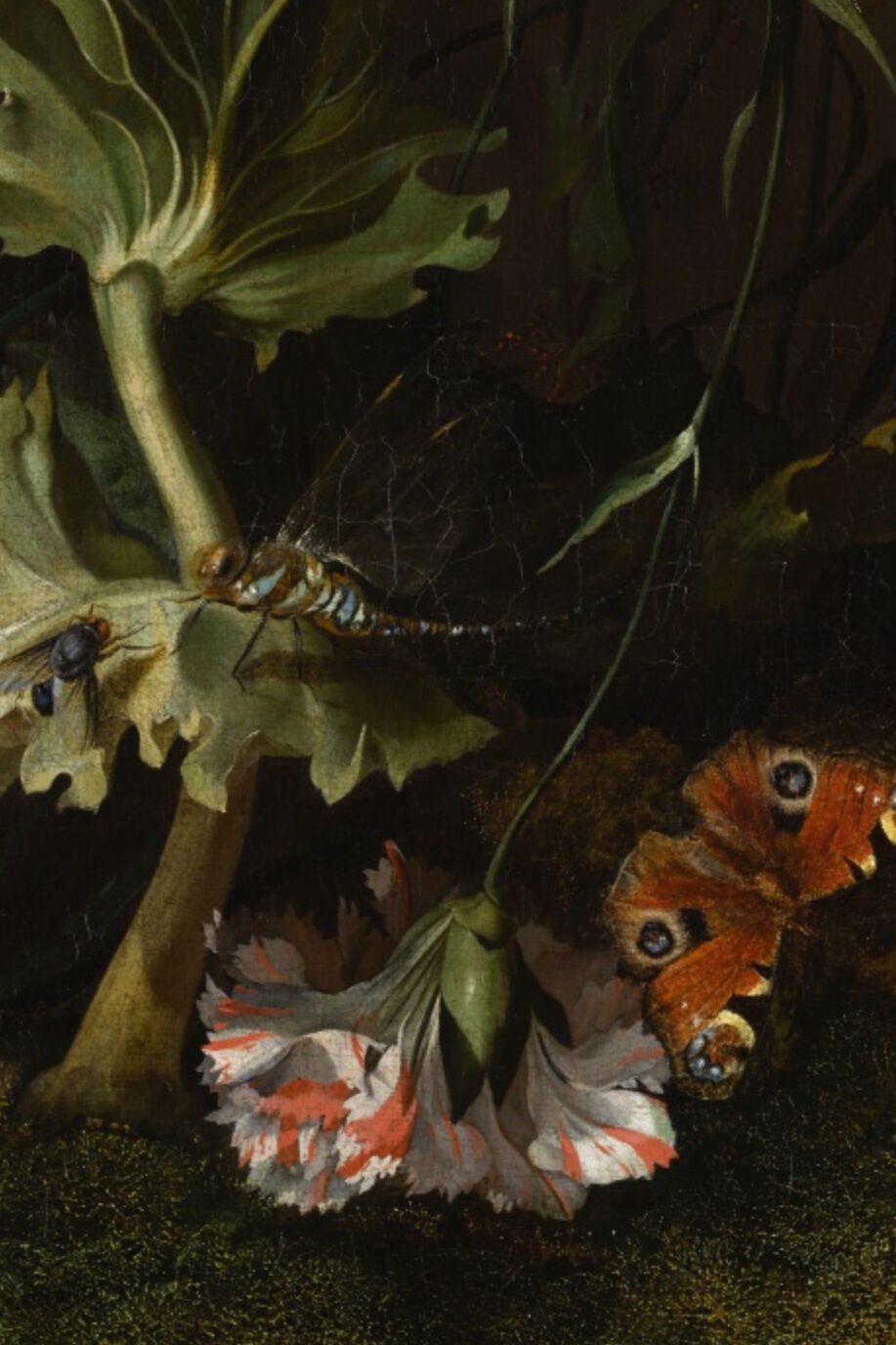 Rachel Ruysch, detail of Still life of a thistle between carnations and cornflowers on a mossy forest floor, with butterflies and a cricket, 1683. Image via Wikimedia Commons.

While Rusych’s depictions of individual plants and animals radiated scientific precision and studied realism, she combined them in fanciful tableaux. Her father’s Wunderkammer included floral specimens from across the globe, and her paintings of riotous, tangled bouquets blended breeds that flowered in different seasons and grew in different parts of the world. In other words, Ruysch created bizarre ecologies where apple blossoms and orange lilies could bloom in concert. She was also one of the first Western painters to include cacti in her still lifes, as in A still life with devil’s trumpet, a cactus, a fig branch, honeysuckle and other flowers in a blue glass vase resting on a ledge (ca. 1690), as well as the first to depict the Alyte, or midwife toad, in a sottobosco piece.
This fusion of exquisite realism and imaginative composition was innovative: It neither “conformed simply to the predominant conventions of allegorical floral still-life in the period nor to those of scientific illustration, yet participated in both,” as art historian Marsha Meskimmon points out in her 2012 book Women Making Art: History, Subjectivity, Aesthetics.
Interestingly, Ruysch didn’t just observe her father’s collection of specimens; she also played a key role in arranging the dioramas that visitors from across Europe came to ogle. As early as 1680, when Ruysch was in her late teens, she sewed and posed elements of the embalmed memento mori displays, which blended scientific documentation and eccentric artistry. In some, “skeletons of foetuses were placed on ‘rocks’ of kidney and bladder stones and set amidst blood vessels inflated to look like tiny trees,” according to Kooijmans. Anthropological historian Elizabeth Hallam has noted that at least one embalmed fetus wore a flower crown and held a bundle of flowers, pointing to a fusion of Frederik’s and Rachel’s interests. 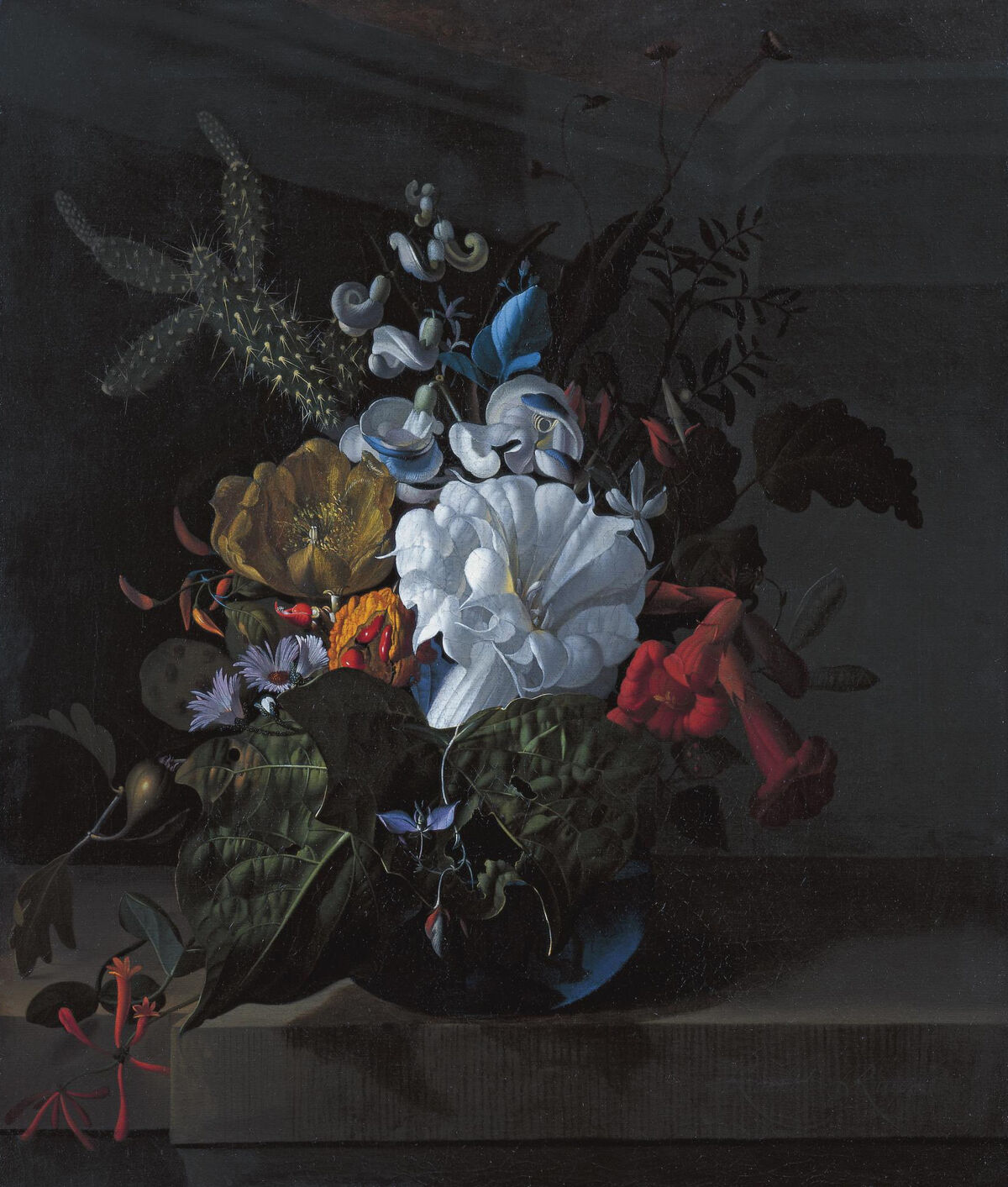 Rachel Ruysch, A still life with devil's trumpet, a cactus, a fig branch, honeysuckle and other flowers in a blue glass vase resting on a ledge, ca. 1690. Image via Wikimedia Commons. 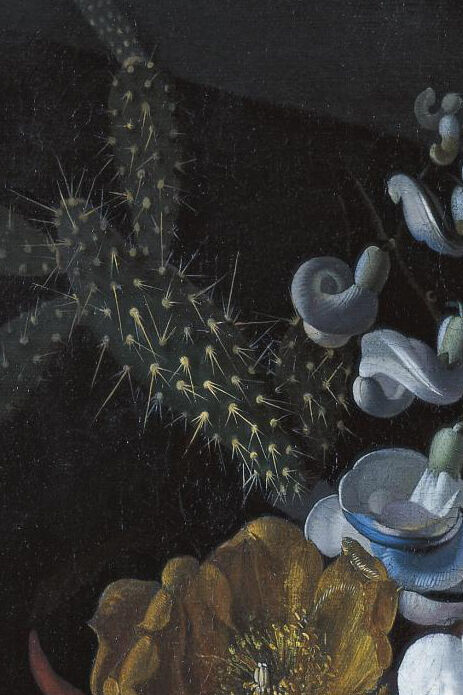 Rachel Ruysch, detail of A still life with devil's trumpet, a cactus, a fig branch, honeysuckle and other flowers in a blue glass vase resting on a ledge, ca. 1690. Image via Wikimedia Commons.

Ruysch also taught her father how to draw, a role that “should not be underestimated,” writes Meskimmon. “Published images were a crucial means of disseminating scientific knowledge throughout Europe in the period and Rachel’s contribution to this facet of Frederick’s practice was quite valuable.” Through the collaborations between Ruysch and her father, “visual exchanges between anatomical cabinet and still-life painting developed,” Hallam explained, “both laden with symbols for moral contemplation while also presenting specimens for detailed observation.”
While helping her father, Ruysch’s own reputation as a still-life artist ballooned—as did her client base. Given the Dutch horticultural industry’s recent boom and flourishing bulb trade, floral still lifes were especially fashionable, and Ruysch’s prices were high enough that she only had to paint a few pictures per year. By the time she married fellow painter Juriaen Pool, at the age of 29, she was already established in her own right and retained her maiden name. By 1699, she was the first woman to become a member of The Hague painters’ society Pictura, and by 1708, she and Pool became court painters of the powerful Duke Johann Wilhelm II in Düsseldorf. 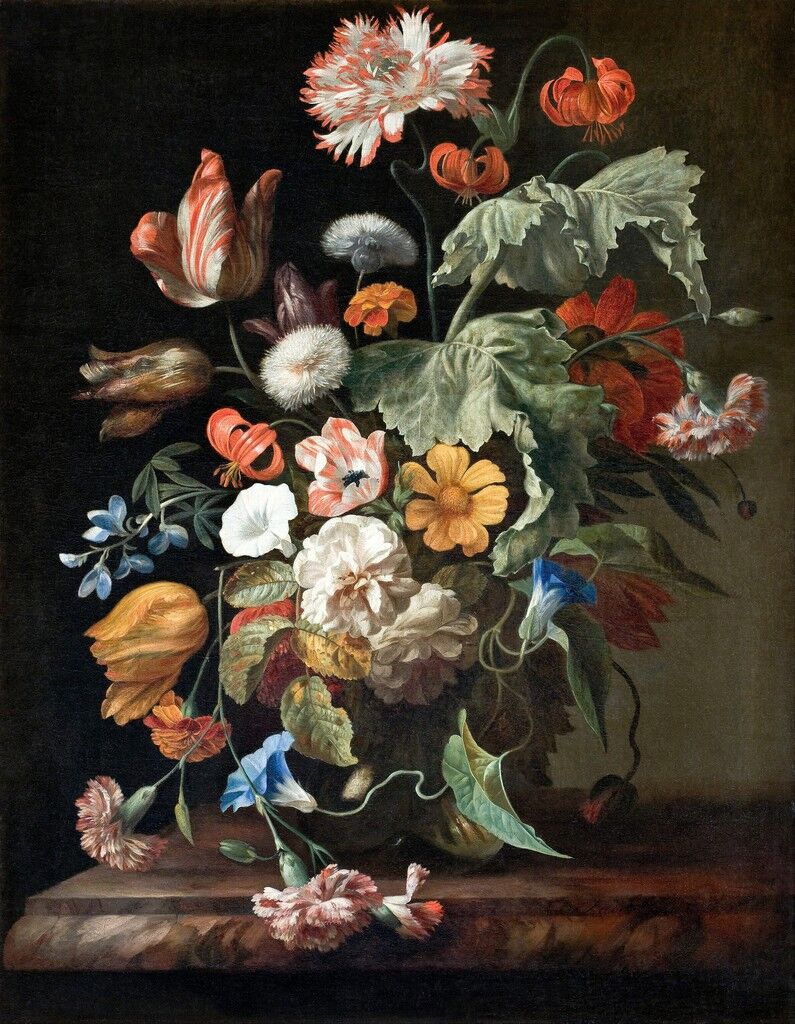 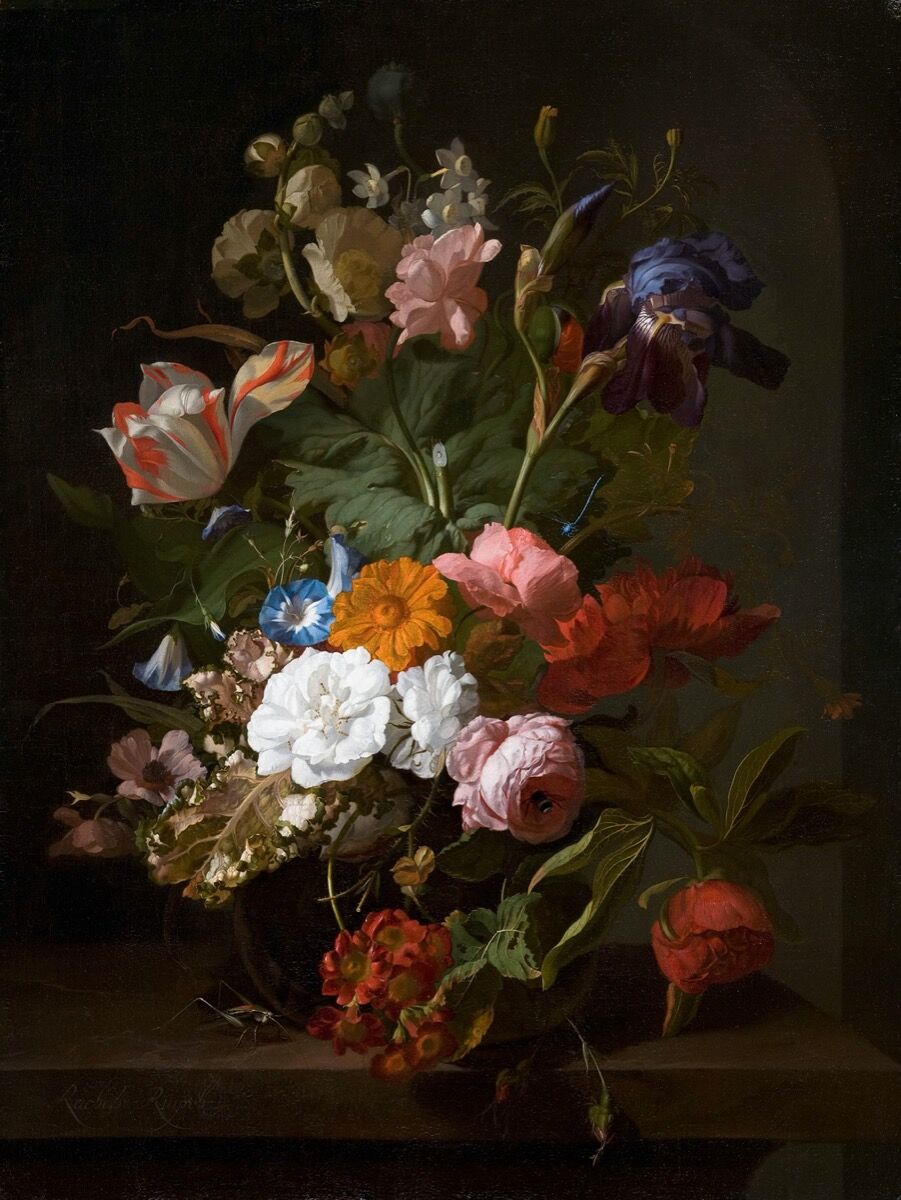 While the majority of imperial painters moved to the city where their patrons resided (a process known as Residenzpflicht), Ruysch had enough clout to convince Wilhelm to let her stay in Amsterdam, sending one painting a year to the elector and visiting his palace only occasionally. After all, Ruysch had numerous children and didn’t want to uproot her family. (Her 10th and last child, born when she was 47, became Wilhelm II’s godson.)
Ruysch’s buyers were moneyed and powerful, yet she retained artistic freedom and “refused to adapt [her] work and personal identity to the desires of a particular patron,” wrote Dániel Margócsy in Commercial Visions: Science, Trade, and Visual Culture in the Dutch Golden Age (2014). Her work nevertheless commanded hefty sums, known to sell for as much as 1,200 guilders for a single canvas. By means of comparison, “Rembrandt never got really more than 500 guilders for a painting,” as National Gallery curatorial fellow Nina Cahill has explained. 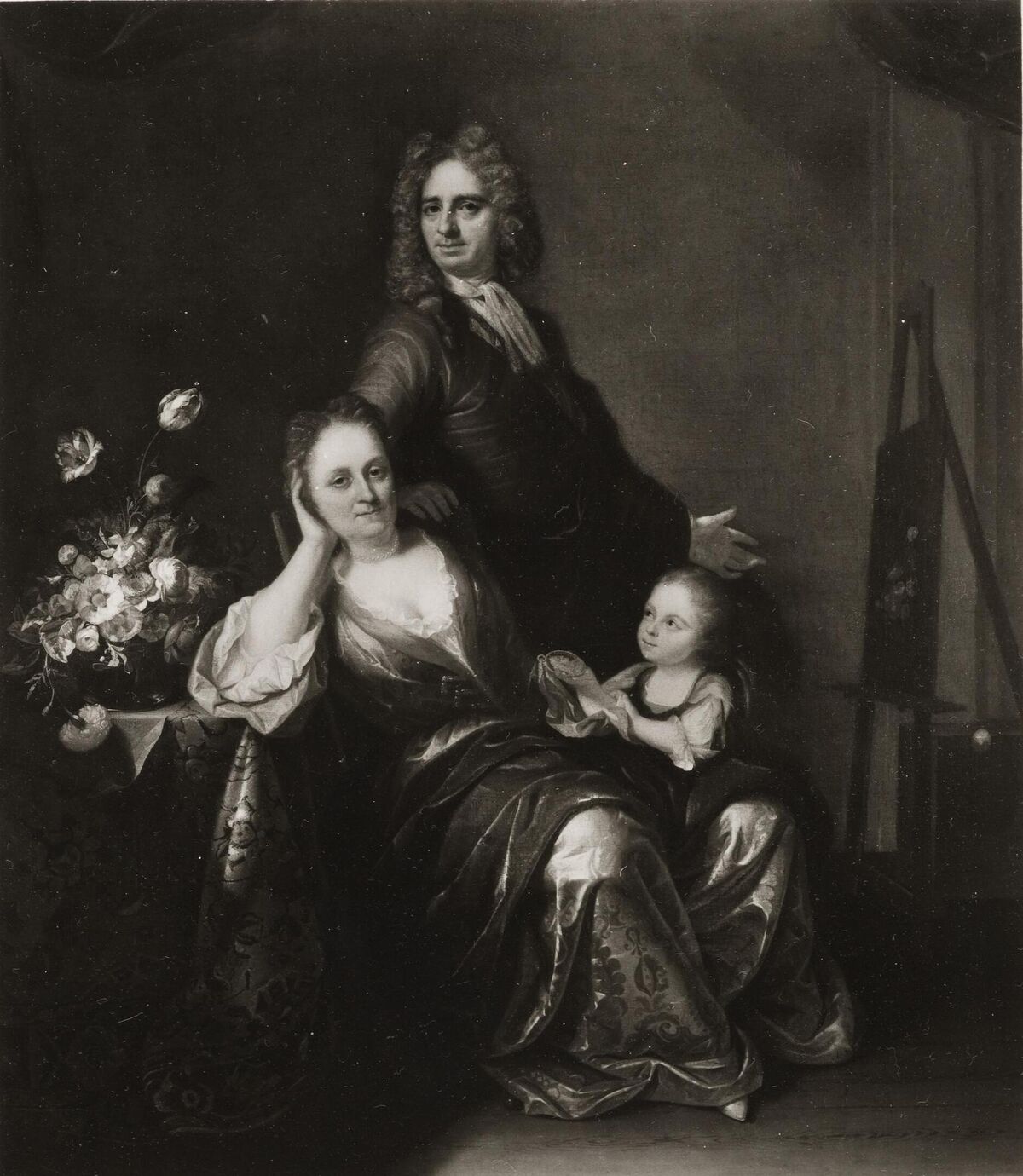 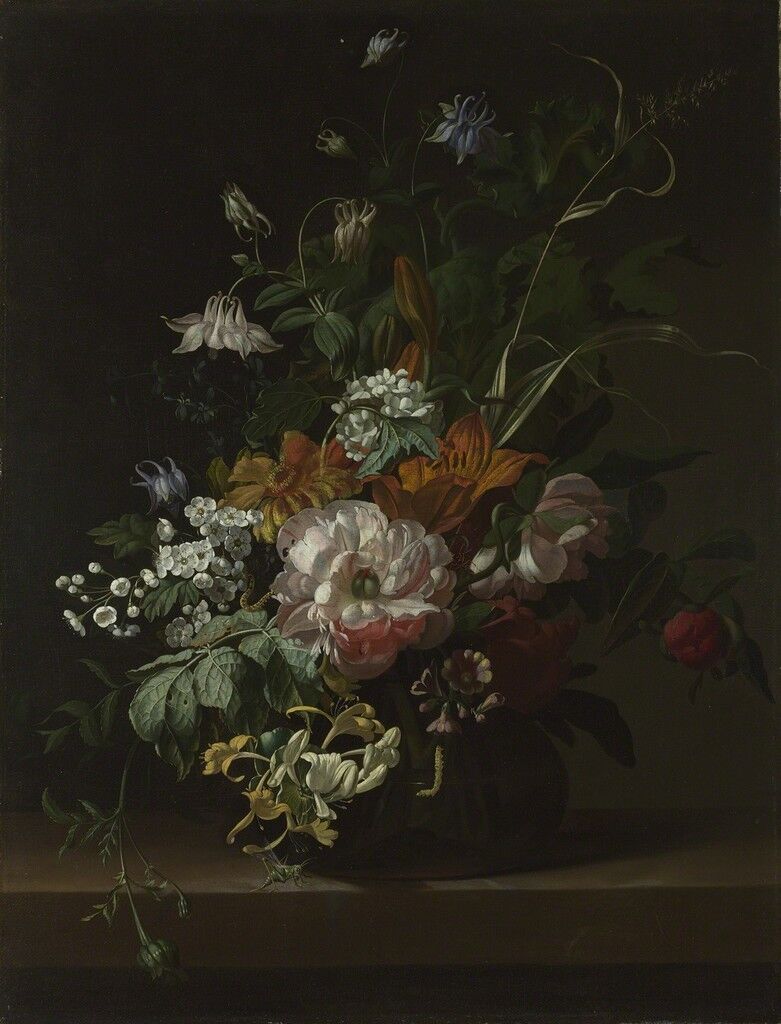 Rachel Ruysch
Flowers in a Vase, about 1685
The National Gallery, London
On a visit to Ruysch’s studio in 1711, German scholar and collector Zacharias Conrad von Uffenbach recalled seeing a pair of freshly minted still lifes that Ruysch had sold to Pieter de la Court van der Voort, a cloth merchant, for 1,500 guilders. Uffenbach described them as being endowed “with particularly delicate brushwork,” and remembered seeing Ruysch painting two other works for Cosimo III de’ Medici, with “all kinds of birds’ nests, insects, and suchlike lying about.”
Just a few years later, in 1716, Ruysch’s husband painted a portrait of his wife, commissioned by Wilhelm. Pool’s approach was unique, and the final picture nods both to Ruysch’s rare skill and success, as well as her ability to balance work and family life. In the painting, Ruysch sits front and center while Pool depicts himself behind her, pointing to one of her canvases. On Ruysch’s lap sits her youngest child.
Ruysch passed away at age 86 and painted until at least her early eighties. On a pair of flower paintings from 1747, she proudly scrawled her age—83—alongside her signature. A woman who could do it all, indeed.
Alexxa Gotthardt
Related Stories