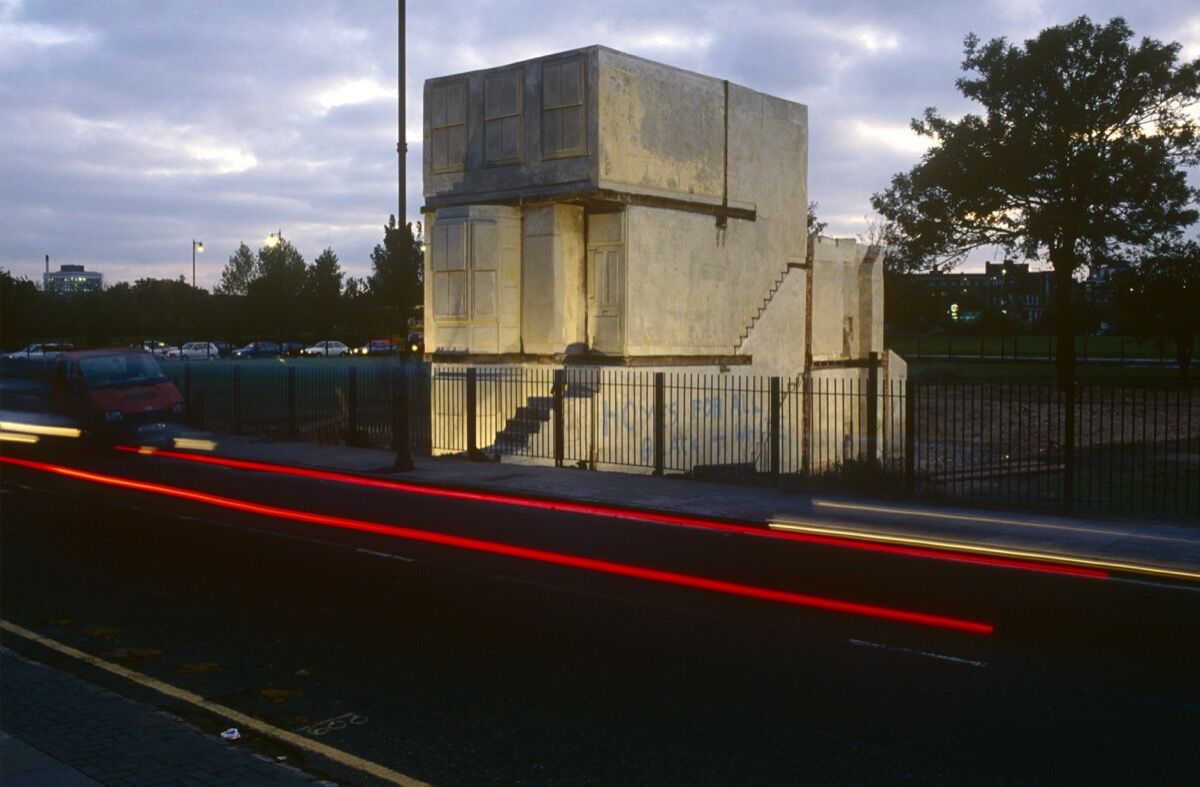 Descriptions of British artist
Rachel Whiteread
’s artworks often read like riddles. She makes room you can’t enter, stairs you can’t climb, and doors you can’t open. Her monumental sculptures appear, upon first glance, like familiar architectural forms—yet they’re devoid of utility, leaving the viewer to simply look and consider the meaning embedded in plaster and concrete. Reactions have varied widely: In 1993, Whiteread received nominations as both the best and worst artist in Britain.
No sculpture earned her as much simultaneous praise and loathing as House (1993). Situated in East London, the artwork comprised the inside of an entire home, cast in concrete. Ultimately, Whiteread won the prestigious Turner Prize for the sculpture. The artwork, the award, and their attendant publicity launched her career and increased her visibility as one of the country’s most ambitious and promising young artists. 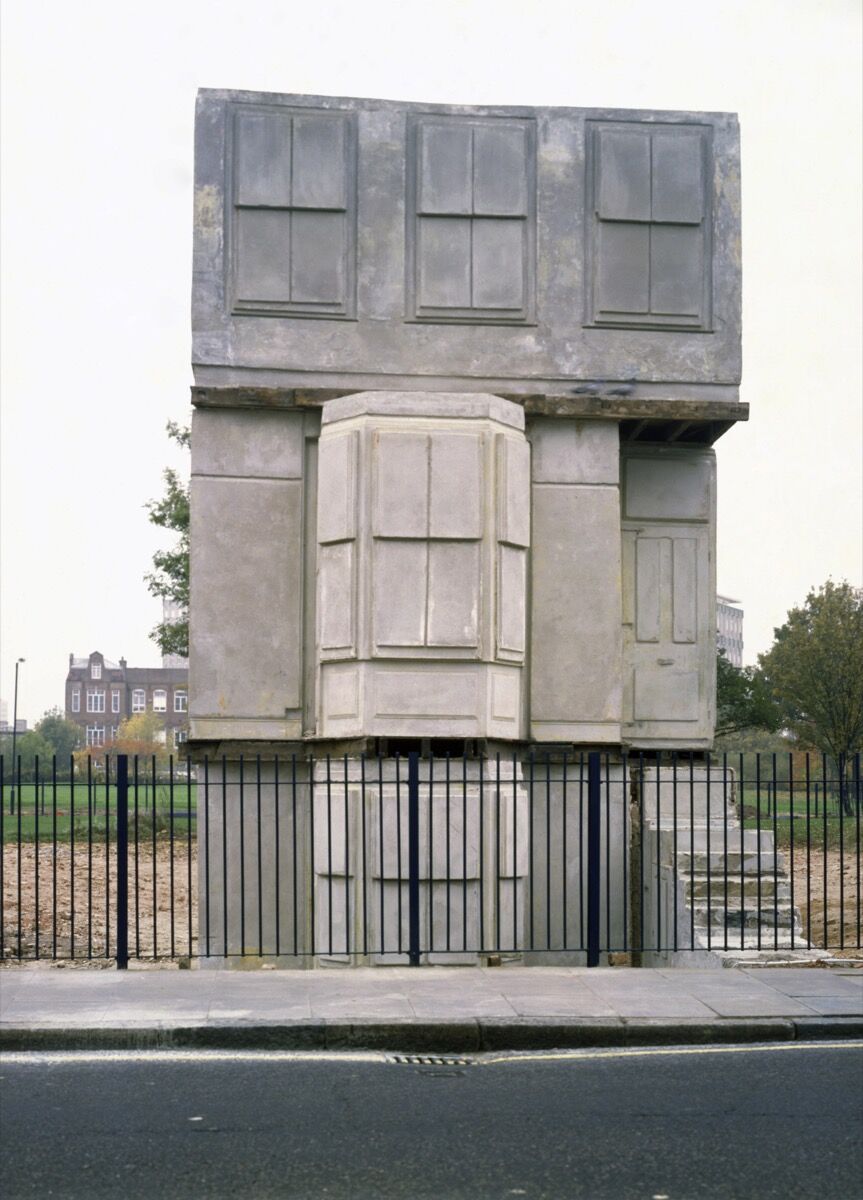 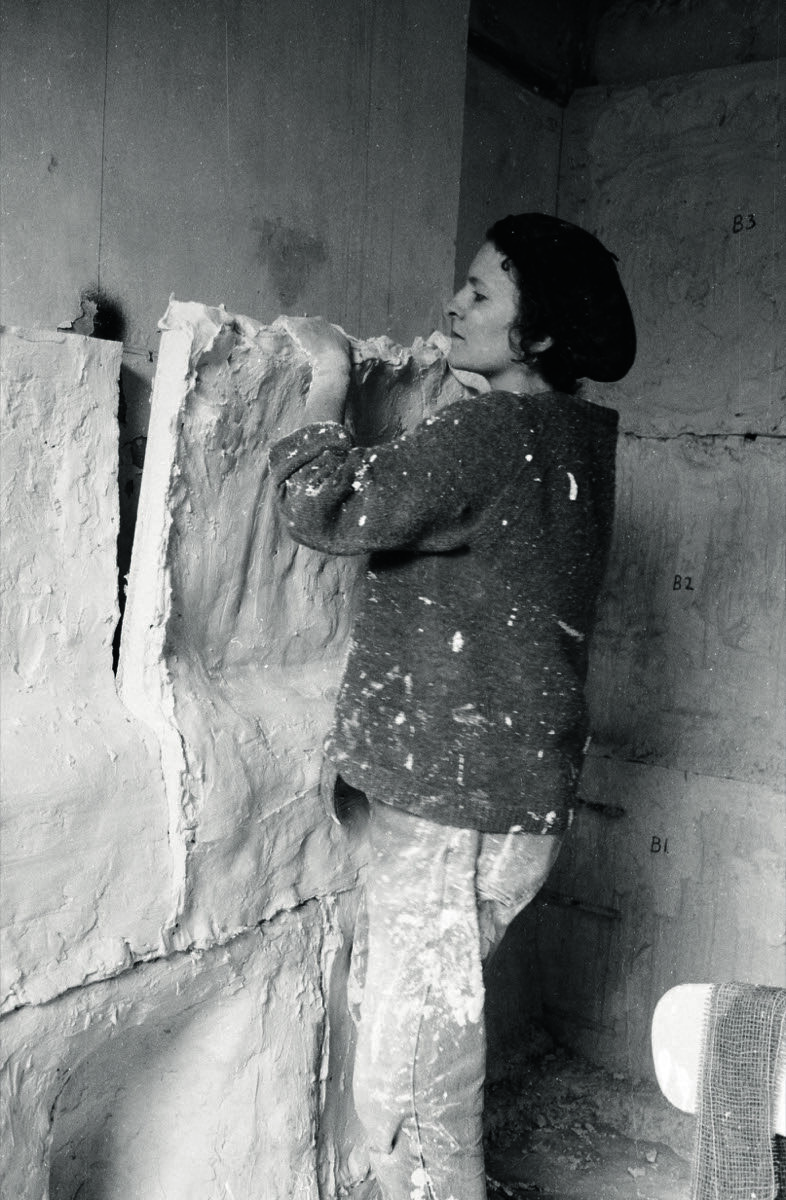 Rachel Whiteread casting Ghost with details of the room at 486 Archway Road, 1990. Courtesy of the artist.

For her project, Whiteread chose to work with a home in northeast London that was slated for demolition. The government had chosen to tear down a group of dilapidated dwellings to create more green space for the community, and the artist was able to access the last building standing—recently vacated by one Mr. Sidney Gale, who’d been evicted (he lost a years-long fight to keep his home, and the local council rehoused him nearby). Whiteread entered the condemned structure and went to work, with approval from the local council and Gale. Her resulting sculpture would be in situ, standing precisely where the original property had been. From the beginning, the artist knew House would only be temporary; the government would tear the work down after just a few months to continue the redevelopment plans.
Whiteread and a team, supported by the London arts organization Artangel, worked inside the home, casting the walls using concrete. An interior metal armature supported the sculpture so that it wouldn’t collapse in on itself. The artist then removed the exterior of the house (“brick by brick,” she told The Independent), leaving only the hardened concrete visible to passersby—a heavy,
Brutalist
mass. House memorialized not the façade that we’re used to seeing, but the more intimate, private details of the interior.
Londoners trekked to the neighborhood to see the massive, multi-story sculpture. The condemned area became a tourist destination. Some of the locals favored House, while others became angry: While they struggled to pay for their own flats, an unlivable structure had received significant attention—and funding. The art world and the local government both voiced dissent in colorful, hyperbolic terms; a council member termed it an “excrescence.” The local government voted to demolish the artwork even earlier than originally agreed. It stood for just 80 days—10 days short of the initially agreed-upon exhibition time. 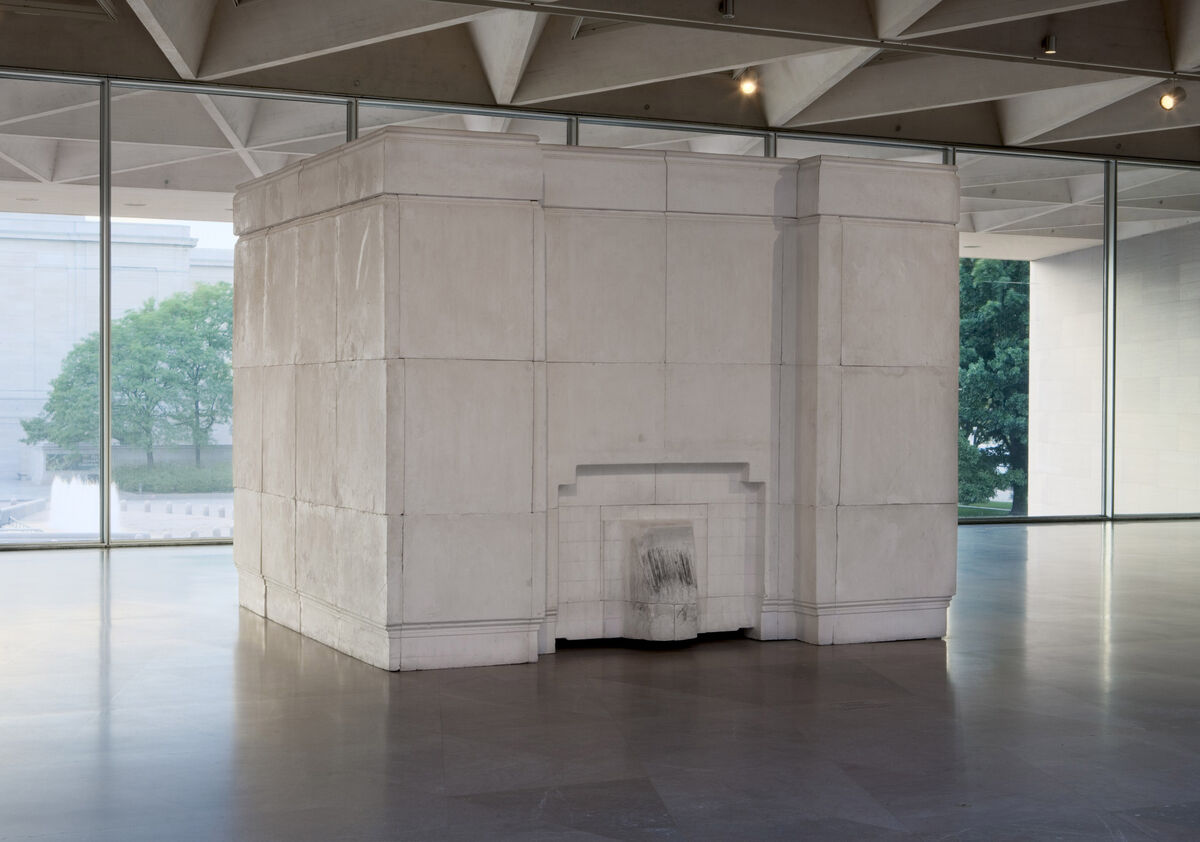 Advertisement
The sculpture’s political dimensions helped make it especially divisiveness. House “was a lightning rod for all kinds of public housing debates,” says Molly Donovan, curator at the National Gallery of Art in Washington, D.C., which recently opened a comprehensive retrospective of Whiteread’s works. The show also includes Ghost (1990), which Donovan identifies as the “lynchpin” that paved the way for her later Turner Prize–winning work.
How did Ghost come about? In 1990, Whiteread was a 27-year-old artist earning money off the Enterprise Allowance Scheme—a Margaret Thatcher–designed welfare program that gave a small weekly income to unemployed Brits who set up their own businesses. With additional grant money and thousands of pounds from her own pocket, she set about making Ghost, casting the entire parlor of a vacant North London home in plaster of Paris. Medium-sized, with a fireplace, window, and door, this room reminded Whiteread of her own childhood homes.
The plaster of Paris material, says Donovan, “has an almost
neoclassical
look. When we think about plaster sculptures we sometimes go all the way back to antiquity.” The aesthetic was fitting, of course, for a work that eternalized the history of one particular space. The completed work comprises 86 panels—smooth on the outside, like the walls they replicated, and rough on the inside (though the viewer never sees the interior, where traces of the artist’s process remain). There’s no top, but Whiteread specifies that exhibition spaces must place Ghost in locations where viewers are unable peer inside from above. 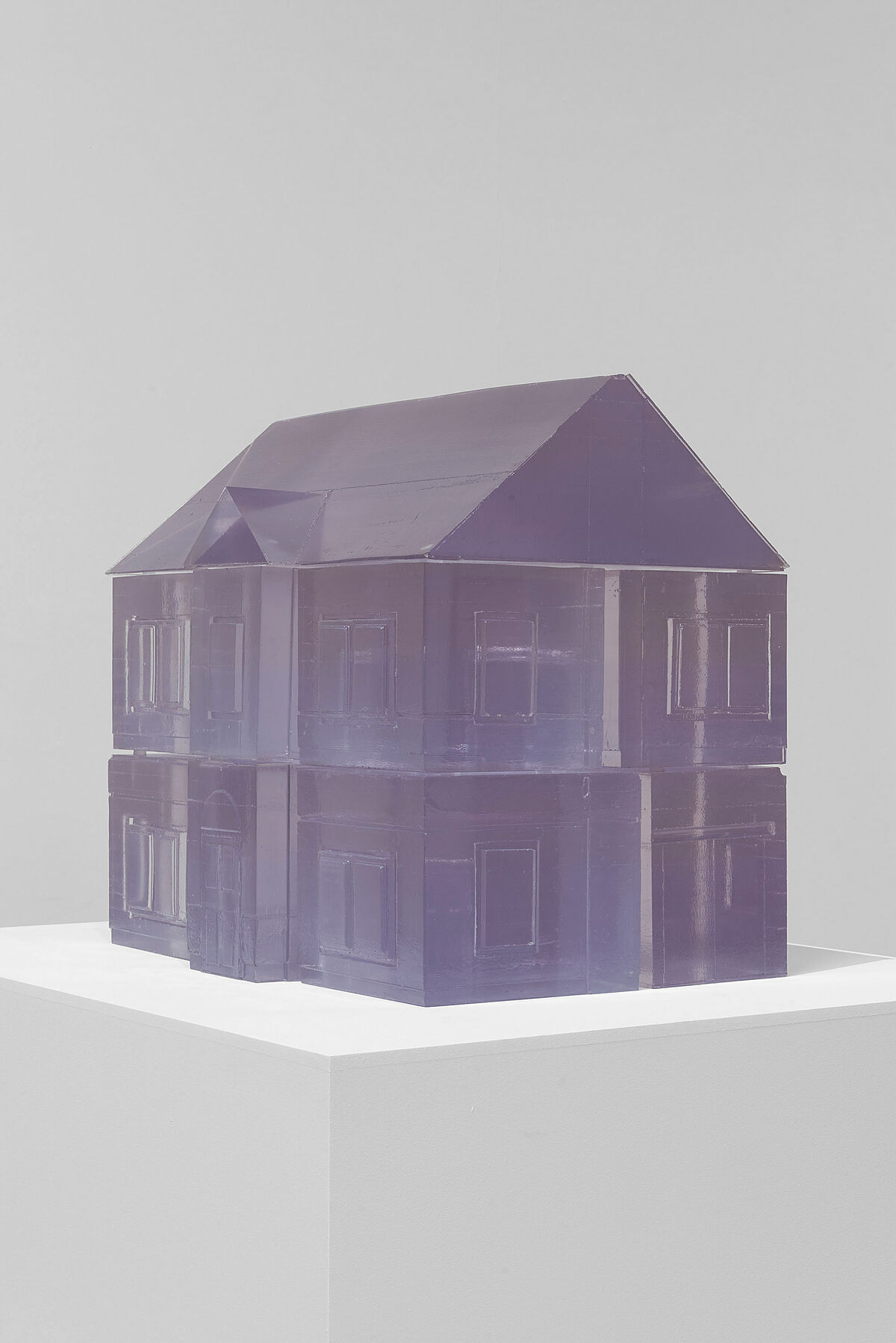 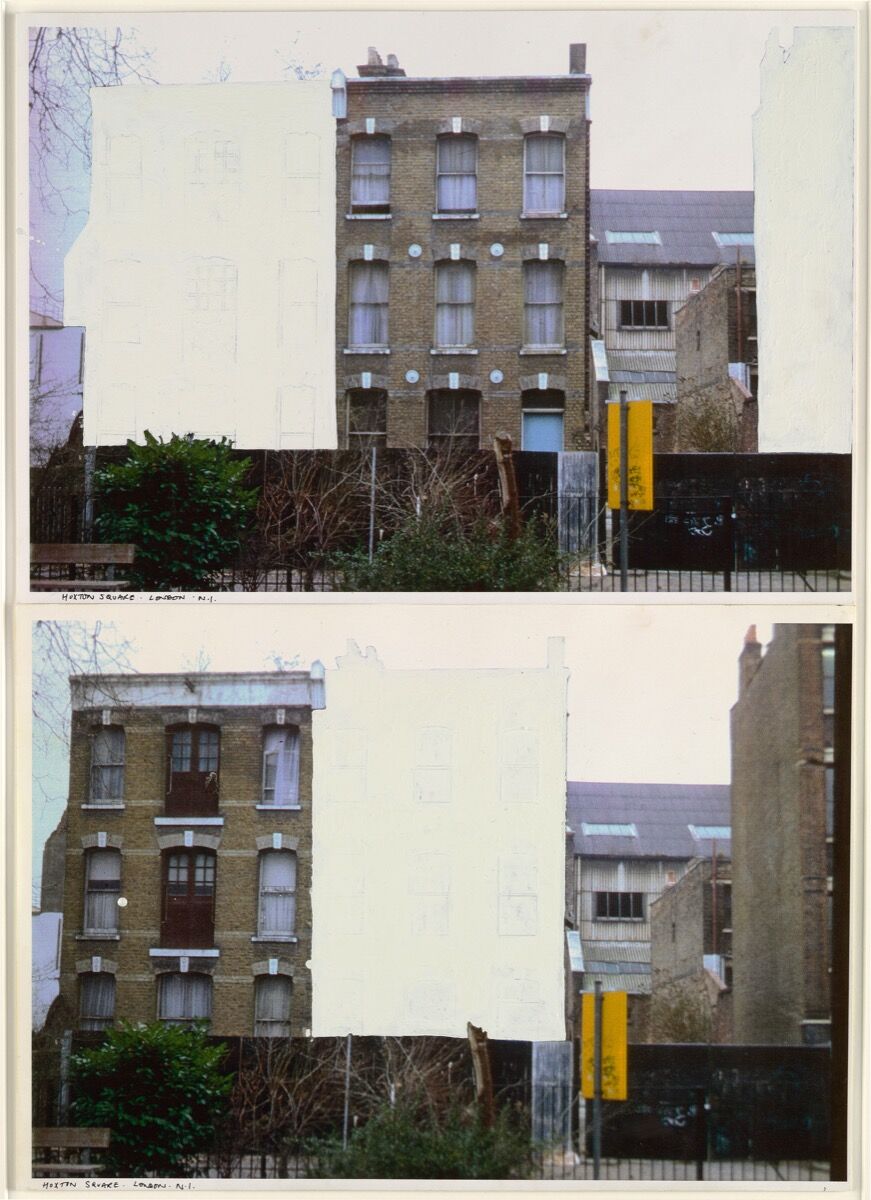 The Guardian’s Jonathan Jones posited that Ghost is uniquely British, exuding a “Dickensian chill.” “It is the solid trace of all the air that a room once contained,” he wrote in 2012. “We wonder at the dark invisible silence within. Vanished lives, lost voices, forgotten loves are trapped in that fossilised room like prehistoric creatures in limestone.” Whiteread’s sculptural magic, Jones suggested, enlists heavy, colorless plaster to evoke desire, mystery, and death.
In the end, though, it’s House—a transient work that exists only in documentation—that remains Whiteread’s greatest feat to date. “People were even lobbying in parliament,” Whiteread told The Guardian in 2007, recalling public fights to keep the sculpture on permanent view. “There was nothing in the art world that had had that level of publicity before.”
House came to a bittersweet end. On the same day Whiteread won the Turner Prize (November 23, 1993), the council decided to demolish her sculpture. Shortly after, a demolition and dismantling engineer razed the work. The televised, highly publicized event—journalists swarmed Whiteread, onlookers scooped up concrete remnants as keepsakes—took about an hour. House, however, had already earned its real estate in the art historical canon.
Alina Cohen
Correction: An earlier version of this piece incorrectly stated that Whiteread was awarded the Turner Prize on January 11, 1994; she was awarded the prize on November 23, 1993.
Related Stories