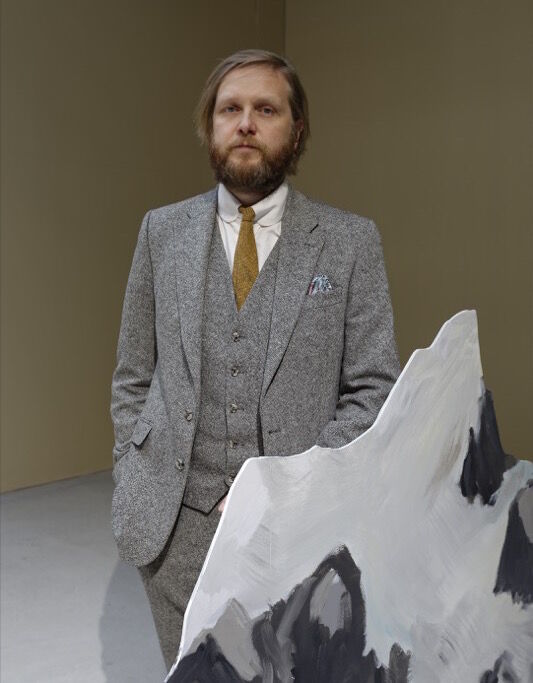 “I’ve always liked that saying that the cliché is the ultimate expression,”
Ragnar Kjartansson
told a throng of journalists at the Palais de Tokyo in Paris on Monday—without even a hint of irony. Dressed in a red bowtie and a navy suit for the opening of his first solo exhibition in France, the Icelandic artist was the very picture of Nordic health: flushed cheeks, twinkling eyes, lips drawn into a mischievous grin. And despite the austerity of his professional, black-clad crowd, he continued in that jubilant tone, regularly inserting jolly voices into his speech as though reading a story to children. “Performance is really in everything,” he concluded, dropping suddenly into a baritone, “and I’m always interested in that tension between the acted and the real.”
Based in Reykjavik and educated at the Royal Academy of Sweden and the Icelandic Academy of the Arts, Kjartansson is of a piece with his work. His personal theatricality is reflected in his video installations, durational performances, and paintings, all of which draw equally from the fields of sculpture, plein-air painting, opera, cinema, and theater. Throughout his multidisciplinary process, he plumbs the omnipresence of artifice in the history of human expression, framing it as an invaluable fact of existence. But rather than focus on the sinister aspect of our tendency to dissemble and affect, his lyrical compositions uplift, celebrating our shared impulse to feign and transcend reality. 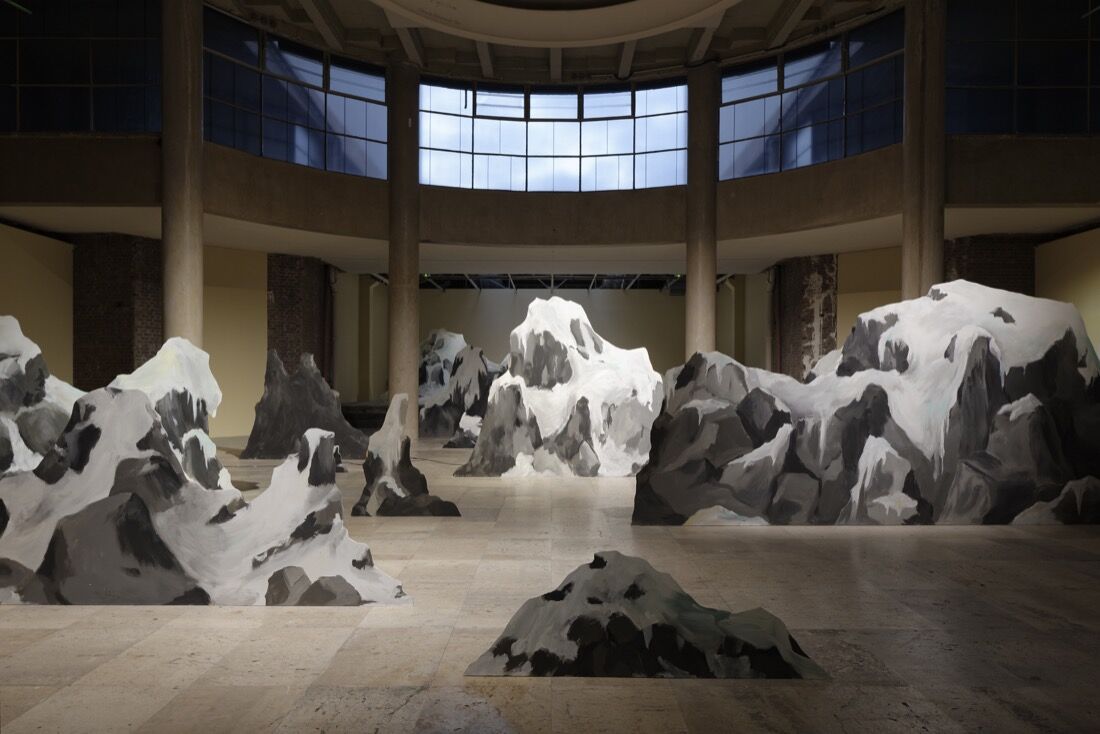 “Only he who knows desire,” as his show is titled, occupies a network of high-ceilinged, windowless chambers on a lower floor of the Palais. It feels a bit like backstage, and that is exactly the point. As viewers descend the stairs from the foyer, they are greeted by a minimalist installation of plywood theater props painted to recall snow-capped mounds of striated stone—a grove of illusionistic boulders—that shares its title with the show. The scene evokes Odyssian journeys over land and sea. And yet it’s also endearingly transparent in its material reality: wood pretending to be rock. These modest accessories exist in a state of such desperate and obvious imitation that they remind us of ourselves.

Advertisement
It’s a poignant metaphor for the human inclination to aspire, inviting projection and acting as a poetic opening salvo to the rest of the presentation. In Scenes from Western Culture (2015), inspired by the bucolic charm of Jean-Antoine Watteau’s 17th-century compositions, a series of filmed vignettes play on loop across several large screens. Although nothing really ever happens, each one, like a cinematic painting, offers a fragmented glimpse into a sort of idealized version of the everyday, one both exaggerated and banal. A long-limbed couple makes love on a white bed; a woman swims laps in a stone pool; children play on the majestic steps of a public garden; a dog sleeps beside a grandfather clock. Although these moments suggest the potential for narrative, they never organize themselves into one. The phantasm of real life that is almost evoked feels all the more artificial for its choreographed naturalism. 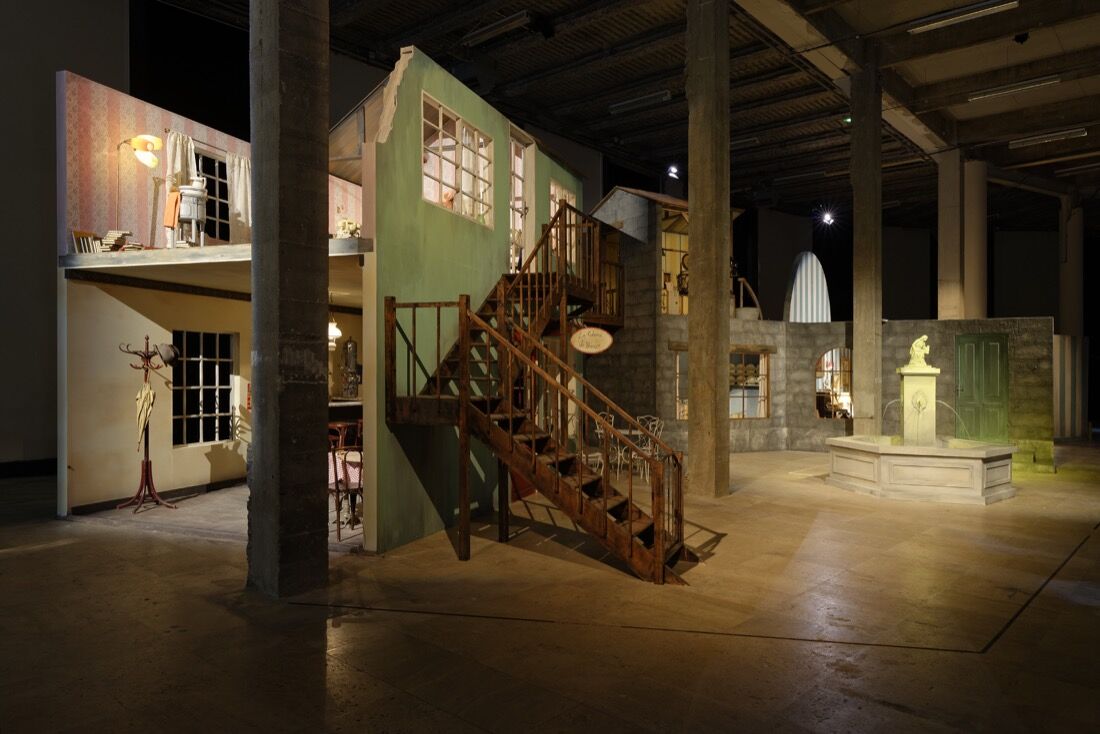 That sensation is echoed in Bonjour (2015), a new work conceived specially for this show. Part sculptural installation and part performance, the piece repeats every 14 minutes on a glorious set Kjartansson built to evoke “a touristic idea of France, which of course doesn’t exist in reality.” Indeed, the action unfolds as a utopian period piece of sorts, opening concurrent windows on neighbors Julien and Marie as they go about their daily rituals in a picturesque French village. Following the passage of a day, the light changes as dawn melts into day and then day to darkness, and back again. Our protagonists awake to birdsong, stretch, and begin their morning ablutions.

Viewed in cross-section in their perfectly his-and-her apartments, he makes coffee; she does her hair. Their lives are separate—until he steps outside to smoke, and she descends the stairs toward a fountain to fill a vase of flowers with water. Their eyes meet across the courtyard, they exchange one word—“Bonjour,” spoken forcefully, as though long-repressed—and then they retreat back into the silence of their independent existences. The day moves forward and mundane activities continue: Julien returns to his grand apartment, lit by the low glow of lamps, to read; Marie goes inside and puts on her nightclothes, and they retire before beginning it all over.
But the devil is in the details. Although their encounter is brief, it’s so loaded with longing and unconsummated desire that everything else seems like a mere preparation for it. With the utterance of that one word, all that happened before, and all that happens after, comes to fruition. The piece itself operates as a microcosmic study of performance—as a genre and as a mode of human life. Endless rehearsal and choreography, all to ready us for those fleeting seconds in which the curtains open and we face our audience. 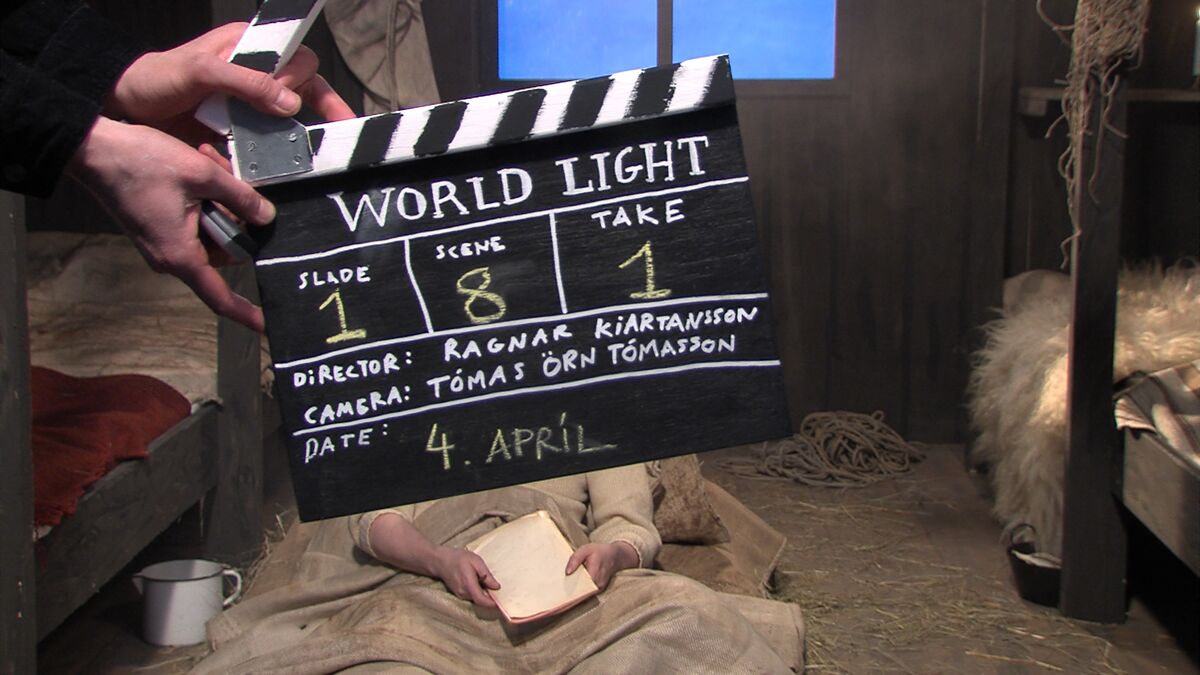 “I’ve always been fascinated by how we stage our presence,” Kjartansson told me as the preview came to an end. “And I think that’s very honest, because even though the idea of performing gets so much bashing, it’s actually who we are, essentially. We are always staging, and I think that’s a good thing: life would be so boring without it.”
—Emily Nathan
“Seu celui qui connaît le désir” is on view at Palais de Tokyo, Paris, Oct. 21, 2015–Jan. 10, 2016.
Follow Palais de Tokyo on Artsy.
Related Stories