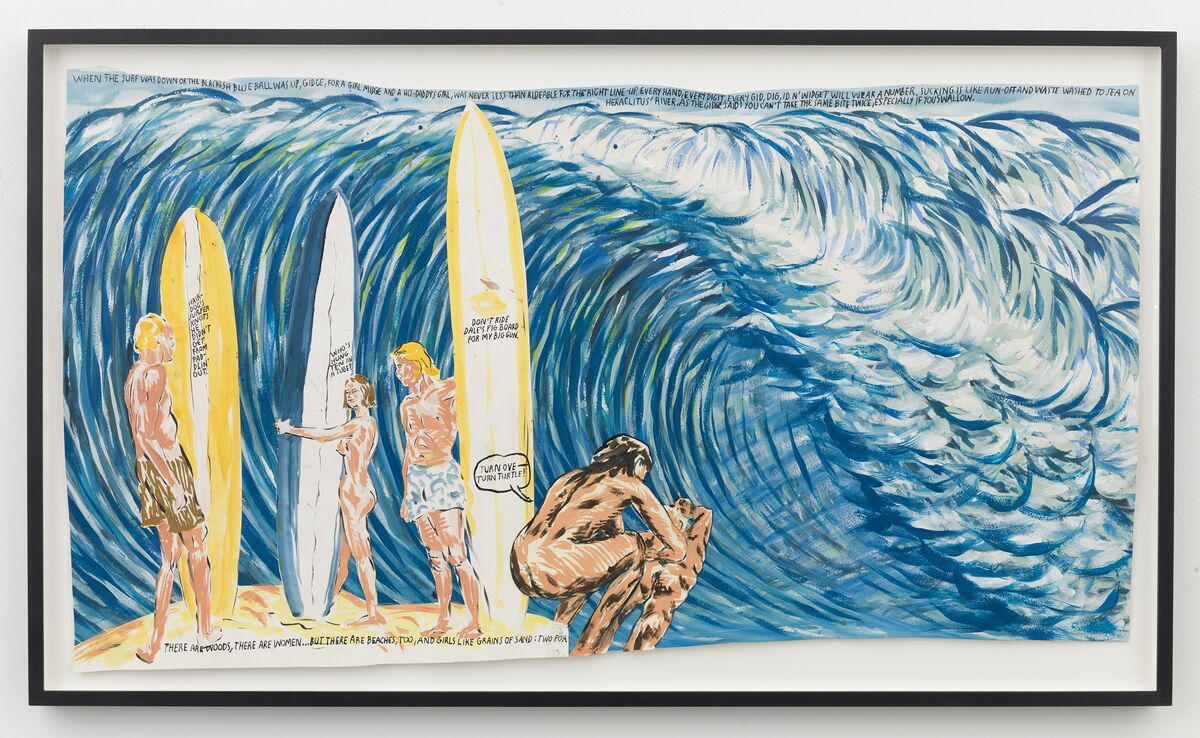 An unruly wave consumes the space of one of cult artist
Raymond Pettibon
’s largest works. Its frothy peak plunges from the sky. The swell looks vast and mighty enough to vaporize a barge, even to annihilate a small planet. But, miraculously, a tiny human riding a board emerges in front of the breaking wave. He seems calm and in control.
This is one of Pettibon’s many surf paintings, which he began in 1985. At the time, he was living in Venice Beach, California, an L.A. neighborhood glutted with surfers and the trappings of beach culture. But he didn’t take up the sport himself. Instead, he observed it from afar and transformed it into an allegory for life’s transcendent highs and ravaging lows.
Pettibon’s body of work is chock full of cultural icons—from baseball players to murderous celebrities like Charles Manson—that he uses to sharply satirize America. In his worldview, baseball is an institution riddled with the country’s epidemics of addiction and racism, while Manson is the figurehead of blind religiosity and the naive orthodoxies of hippie culture. 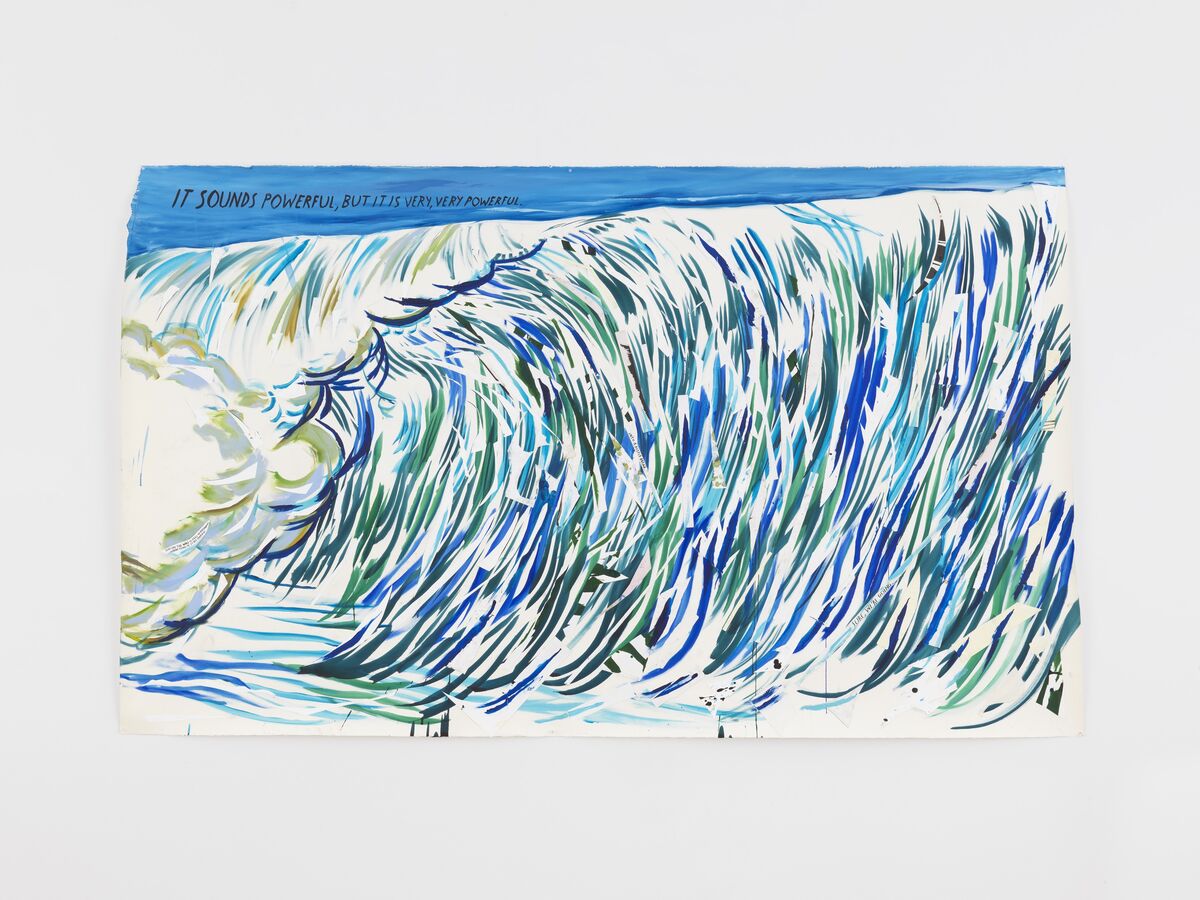 But surfing, unlike the majority of Pettibon’s chosen subjects, is mostly spared from the artist’s raging cultural criticism. Some of his surf pictures do poke fun at the culture surrounding the sport. In one, speech bubbles emerging from buff surfers make clear they’re in the game more to get laid than to commune with the water: “There are woods, there are women…but there are beaches too, and girls like grains of sand.”
Most of them, though, take a different tack. And in the grand scheme of Pettibon’s largely misanthropic oeuvre, his images of surfing double as glimmers of peace—even optimism—in a chaotic world.
If you’ve ever surfed, or watched a gaggle of surfers from the comfort of warm sand, you know that the sport is as much about waiting patiently for a wave and wiping out as it is about catching one. But in Pettibon’s surf pictures, his subjects are almost never idling or falling, but instead mastering the force of nature: little specks of humans carried by the cresting, plummeting water.
In one painting from 1997, a man rides a sky blue and cobalt wave. It towers over him, but he seems unperturbed. Instead, there’s serenity in the little cavity that houses him under the wave’s break. A poetic caption at the top of the piece, suspended in a cloud, reinforces the impression of tranquility, even safety: “The walls are embossed with pink and gold waves: a room that never lets you crash to the pavement.” 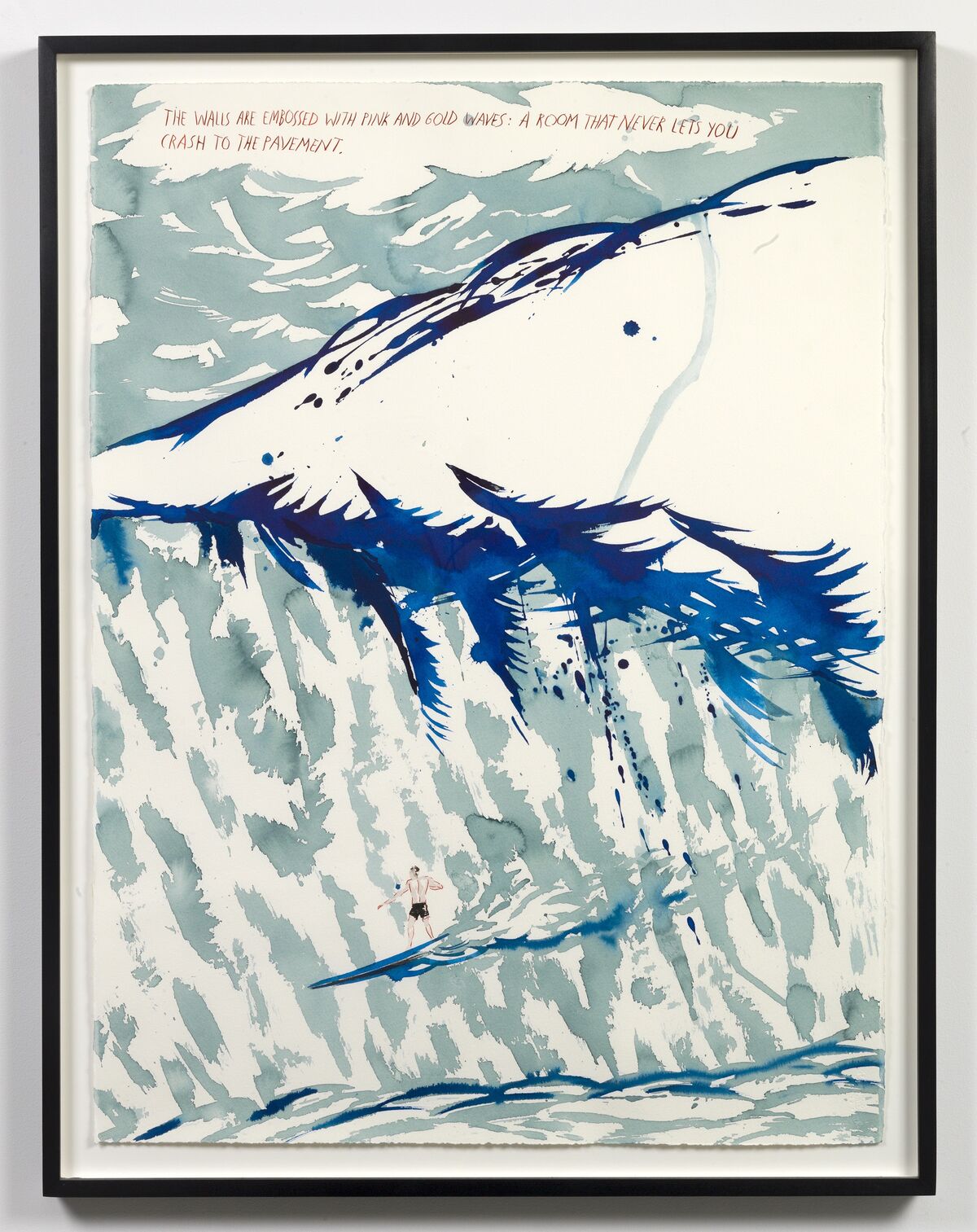 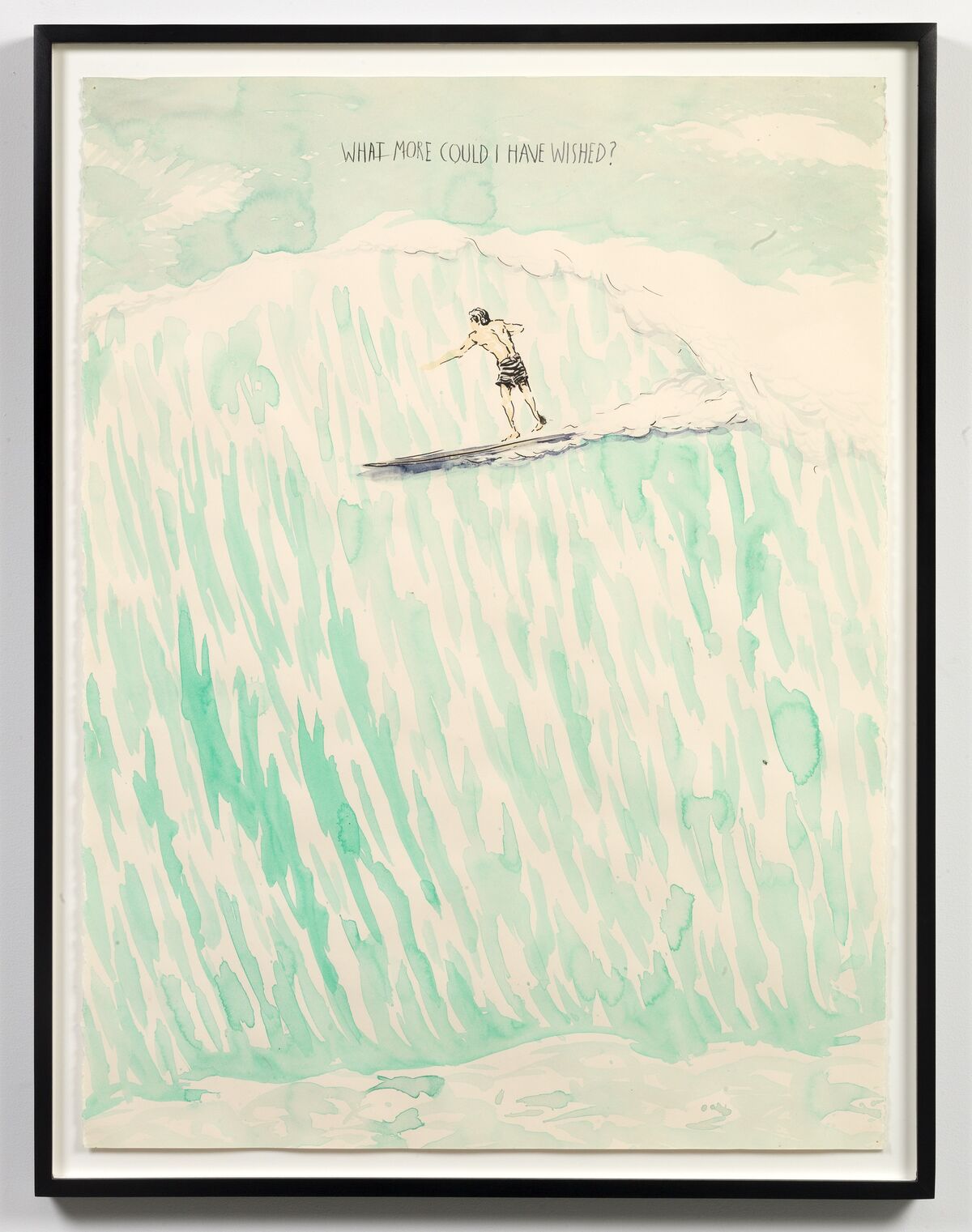 Raymond Pettibon, No Title (What more could...), 1997. Courtesy of David Zwirner, New York.

Advertisement
Another composition shows a surfer gliding across a buoyant, bright turquoise swell. Text above his head reveals his bliss: “What more could I have wished?”
While many of the captions reveal excitement, awe, and peacefulness, they also acknowledge feelings of fear, loneliness, powerlessness, and insignificance—suggesting the whole spectrum of human emotions. “Man stands at the center of nature, his fraction of time encircled by eternity,” Pettibon scrawls on the foamy top of a great wave, invoking existential quandaries. “What am I? And Whence? And Whither?”
But even when Pettibon expresses doubt in the face of the sea’s greatness, he also offers evidence of joy, resilience, humility, and—a characteristic mostly absent from his other series—hope.
Alexxa Gotthardt
Related Stories