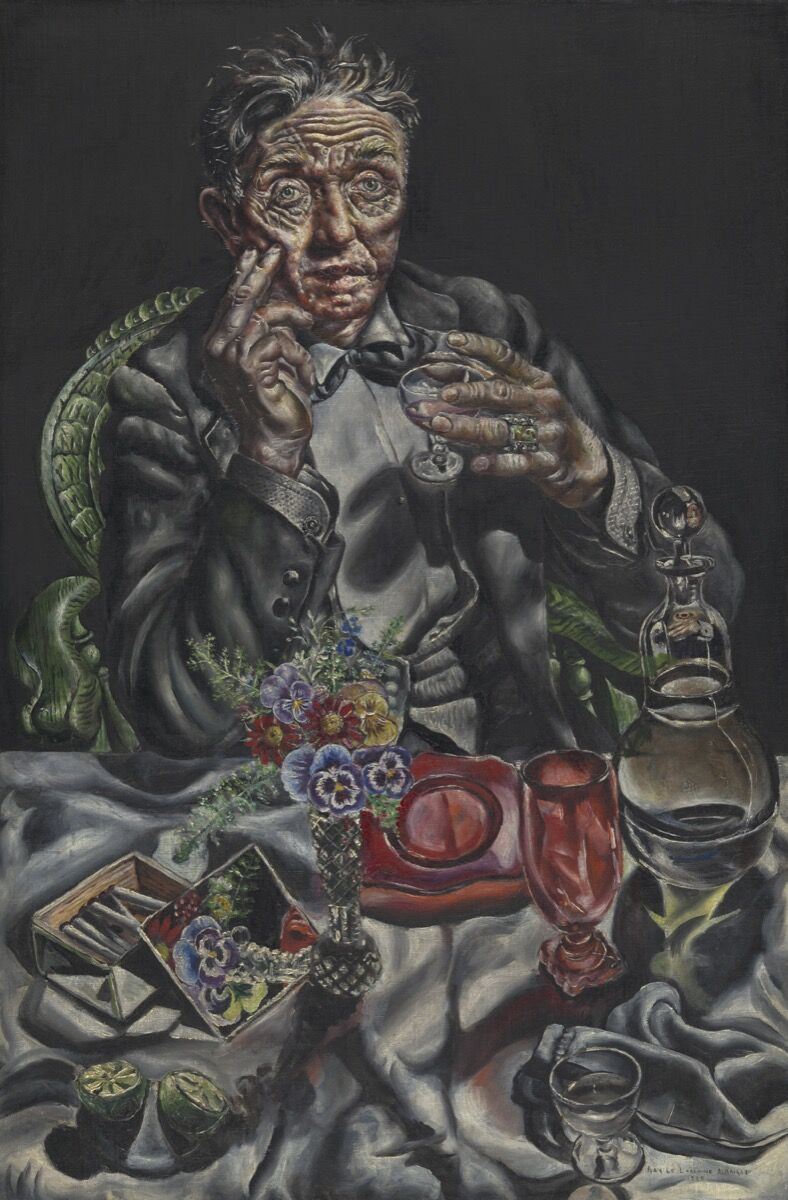 In 1890, Oscar Wilde finished the first version of his only novel, The Picture of Dorian Gray. The book’s titular character is a young, naïve beauty who becomes terrified of losing his looks; for reasons never fully explained, he is able to remain young and pretty while his portrait grows old and ugly, mirroring his rapid moral decay.
In 1943, film director Albert Lewin—then in the early stages of adapting Wilde’s macabre tale for the big screen—went in search of an artist suited to paint a version of the famous picture. The artist he commissioned for the task was
Ivan Le Lorraine Albright
, and the image Albright completed would become one of the jewels of his career, not to mention the film’s most memorable highlight.
Lewin’s film, released to general acclaim in 1945, wasn’t the first to be inspired by the story of Dorian Gray (there were at least seven such films in the 1910s alone), but it was the first to draw an artist of such stature to create the mortal painting. Albright had made his reputation in the 1930s with grotesque, almost nauseatingly detailed portraits of men and women whose bodies seem on the verge of decomposing. These works earned him a slew of honors and commissions: In 1942, his early masterpiece That Which I Should Have Done I Did Not Do (The Door) (1931–41), an eerie image of a disembodied hand hovering over a door, won a major prize from the Metropolitan Museum of Art in New York City. That painting, along with dozens of others, is currently on view at the Art Institute of Chicago as part of an Albright retrospective. 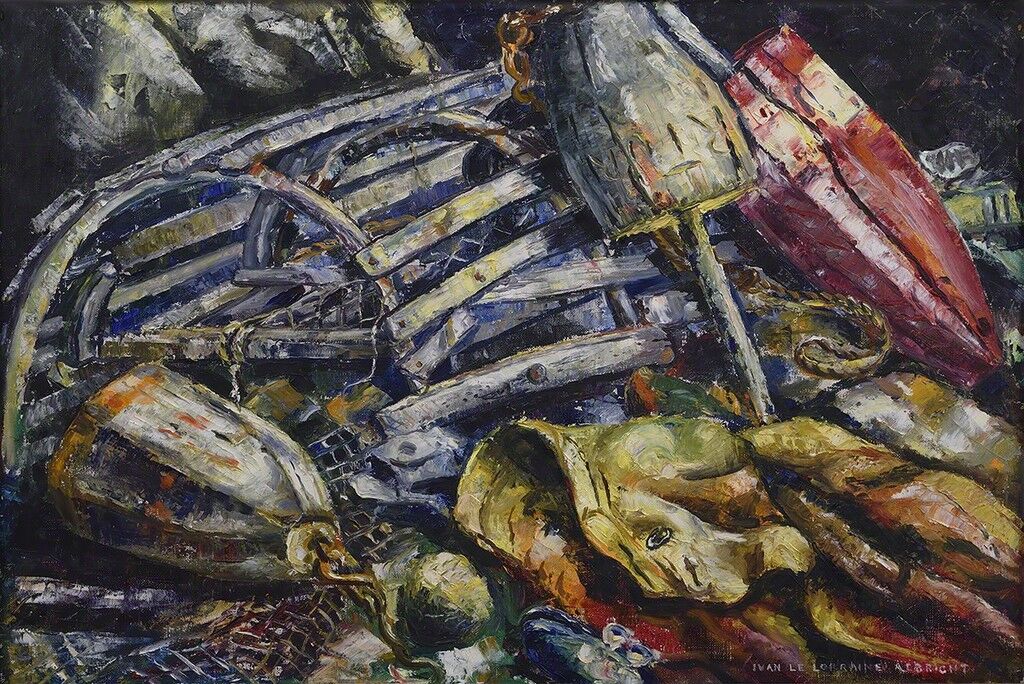 Ivan Le Lorraine Albright
Lobsterman's Catch, 1940
Forum Gallery
Albright was notorious for his slow pace—it took him a full decade to complete The Door, for instance. Yet he was, in many ways, an ideal fit for Lewin’s assignment. No American artist of the 1940s came close to rivaling his visions of flesh gone foul; as the French painter
Jean Dubuffet
was later to put it, Albright revealed “a crumbling, rotting, grinding world of excrescences” that toppled “the ramparts of our tastes, our affectivity, our aversions.” Even Albright’s hyper-methodical approach could be seen as a boon for the filmmakers. In Wilde’s account, the picture of Dorian Gray absorbs each and every one of its owner’s sins, year after year—what better artist than Albright, who labored over every microscopic lesion and wrinkle, to paint it?
Albright had had plenty of practice capturing the body in all its gruesomeness. Born in Illinois in 1897 to the prominent painter
Adam Emory Albright
, the young artist served in a French hospital for much of World War I, during which time he helped doctors by producing medical drawings of maimed soldiers. Though Albright later studied classical oil painting at the School of the Art Institute of Chicago, he claimed that the hospital provided “the best art training” he’d ever had.
The style that Albright eventually developed—a peculiar synthesis of his formal training and his grisly days in France—is often considered a textbook example of Magic Realism, a term first used by the German critic Franz Roh in 1925. Roh championed artists who depicted a heightened version of reality and, in contrast with the
Surrealists
, found elements of magic and mystery in the everyday. 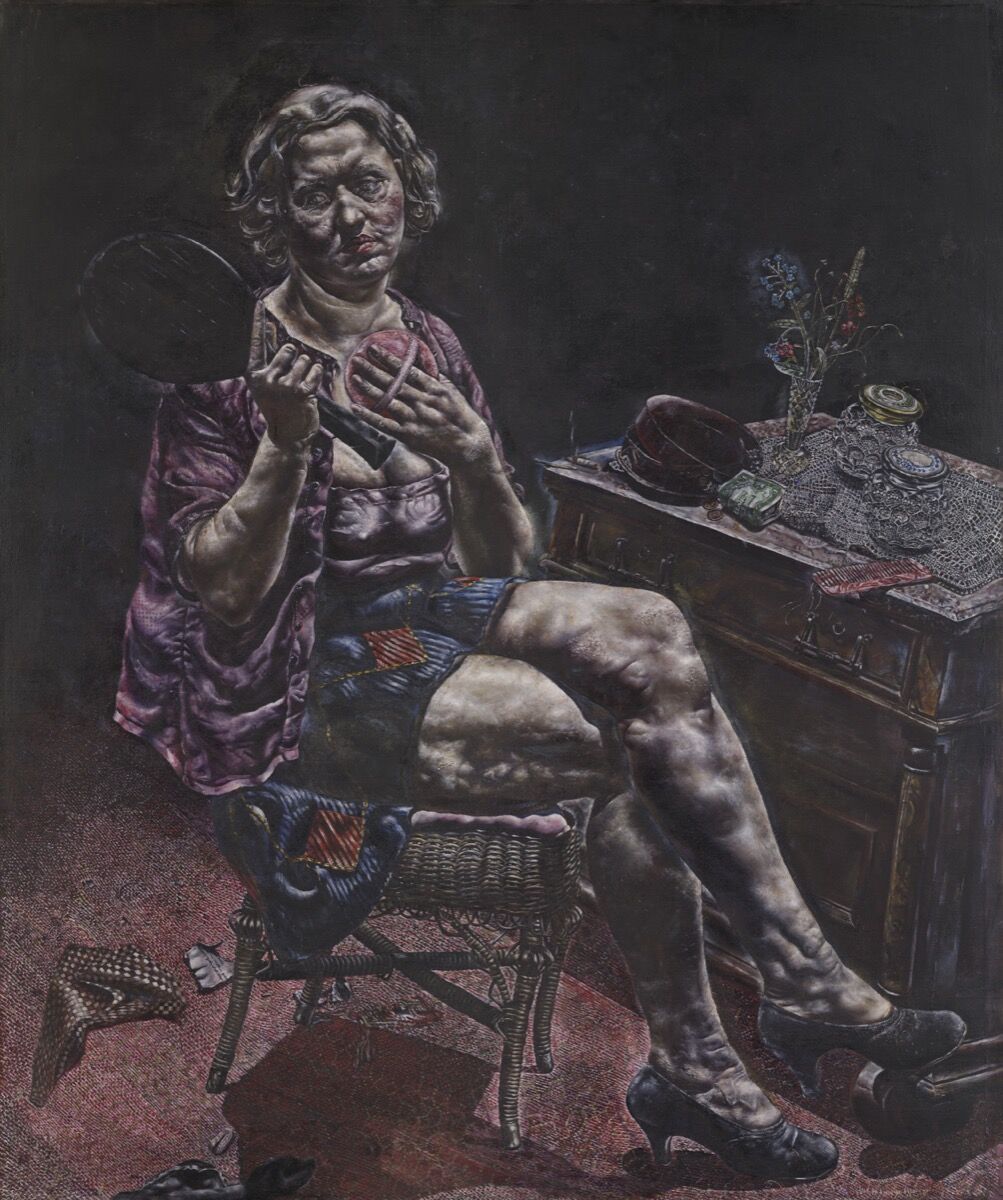 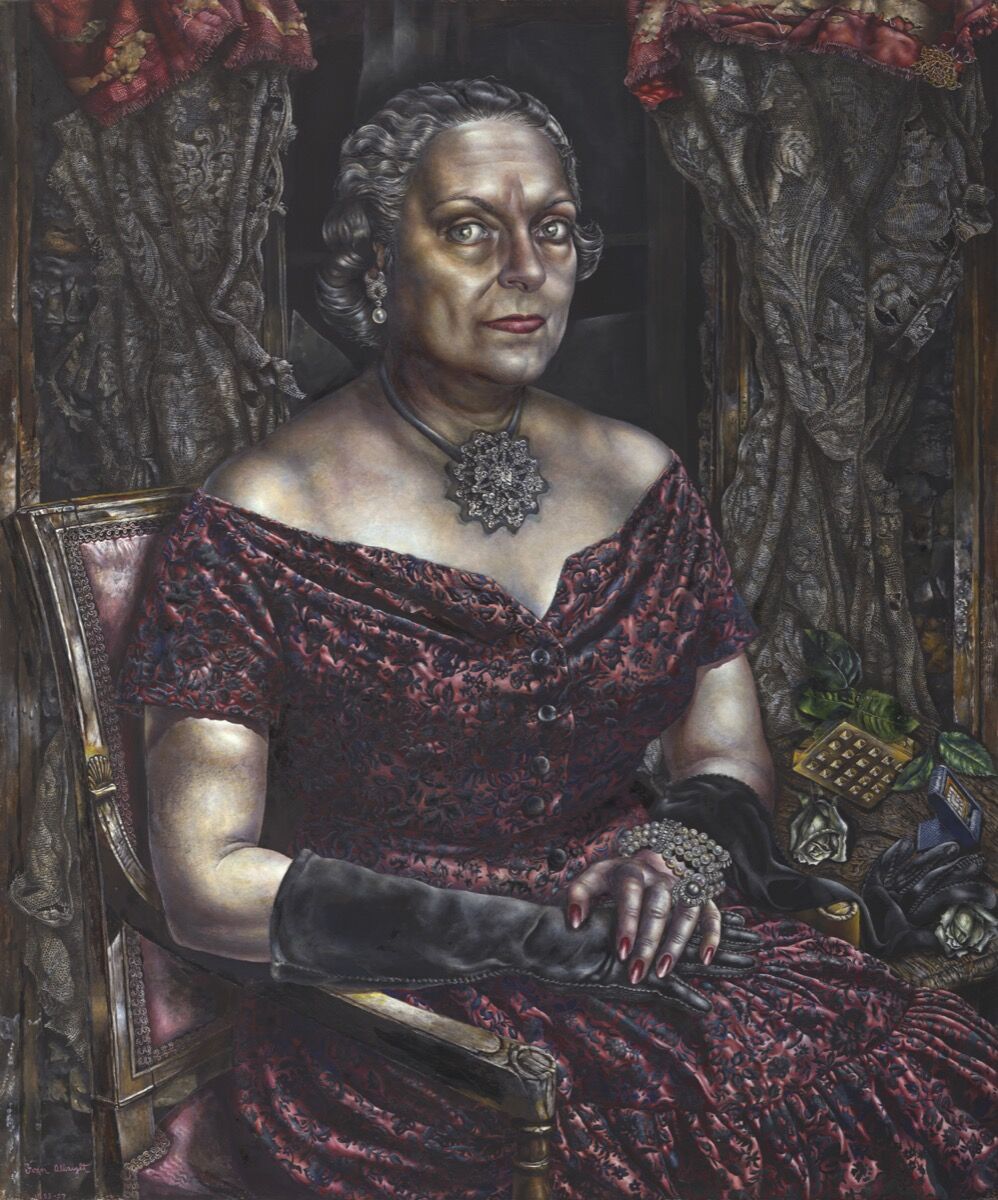 Advertisement
At first glance, a nightmarish Albright painting like And Man Created God in His Own Image (1930–31) might seem comparable with
Salvador Dalí
’s The Persistence of Memory (1931), an equally lurid image of decay. But where Dalí dreams up a fantastic tableau of insects and melting watches, Albright paints only imagery that could exist in the real world. With a doctor’s eye for detail, he makes the deterioration of the man’s sagging body seem as inevitable as the erosion of soil. He exaggerates, but he does so in order to communicate a deeper truth about human life—or, as he put it, to “make flesh more like flesh than has ever been made before; make flesh close, close, and closer, until you feel it.”
To paint the body, Albright drew from his formidable knowledge of European art history. Like the German Renaissance artist
Albrecht Dürer
(whose work he’d studied closely while at the Art Institute), Albright used light, delicate brushes to add almost imperceptibly tiny details to his canvases.
Rembrandt
was another important influence; like his Dutch predecessor, Albright filled his paintings with surprising colors that only reveal themselves upon careful inspection. When seen up close, Into the World There Came a Soul Called Ida (1929–30)—one of Albright’s most admired works—turns into a crazy quilt of greens, yellows, and purples.
Ida suggests that the Dutch Masters influenced Albright in more ways than one. The painting, which depicts a doughy, grey-skinned woman staring sadly into a mirror, is often interpreted as a latter-day vanitas, a genre popular in 17th-century Netherlands that emphasized the transience of life. As art historian Susan Weininger has shown in her writing on Albright, the scene is teeming with symbols of death (wilting flowers, darkness), as well as symbols of the futile steps people take to ward off death (money, makeup). Of course, the most powerful such symbol in the painting is the woman herself, who appears to be waging an unwinnable war on her own mortality. 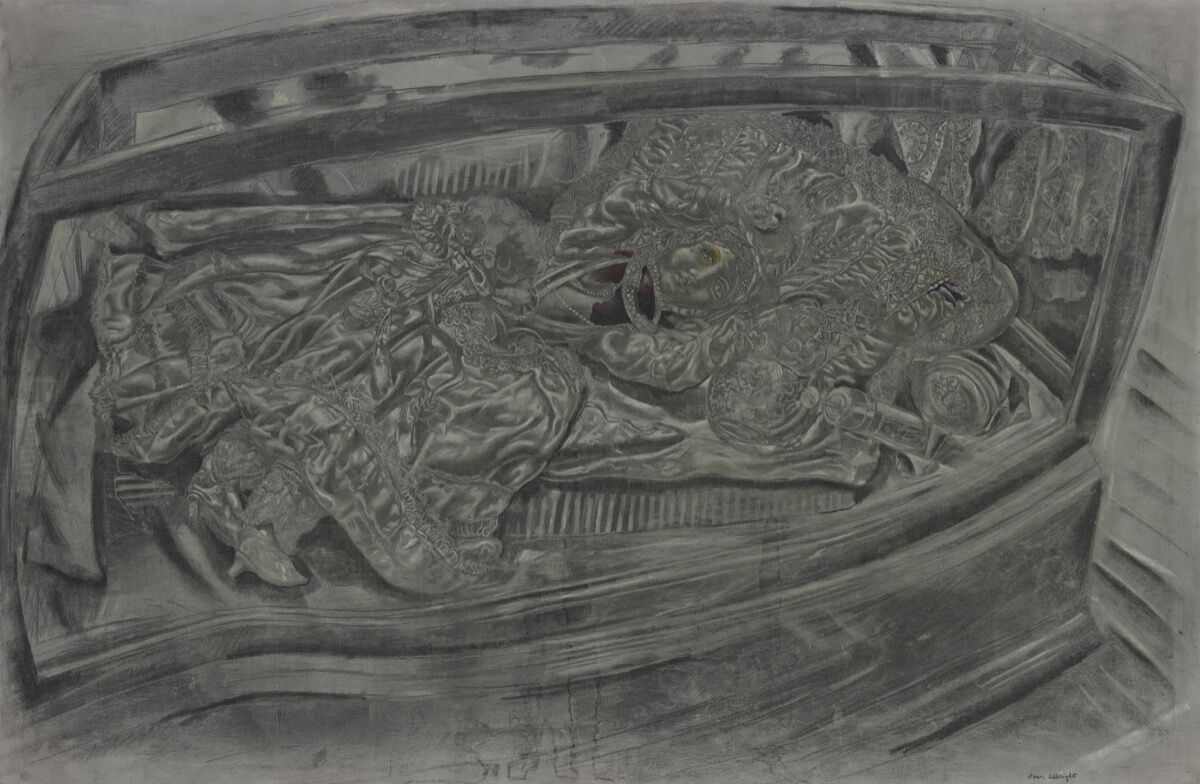 If Ida is a heavily symbolic work, the painting Albright completed for The Picture of Dorian Gray is fiercely, wrenchingly literal, the culmination of everything he’d learned about portraying the body. It’s a little surprising that Albright’s Picture of Dorian Gray (1943–44) has come to be considered one of the artist’s defining achievements, given the constraints he worked under: Because of the film’s production schedule, he had to complete the work in a year (i.e., half a second in Albright time).
Albright’s evocation of decay is also somewhat cheapened by the presence of the ancient Egyptian cat statue on the table beside Dorian, which, the film suggests, is responsible for the character’s agelessness. It’s a gimmicky and completely unnecessary plot device, and, since it’s the only object that doesn’t age visibly, it sticks out of the painting like a sore thumb.
But even so, Albright’s work is undeniably powerful, particularly as Lewin presents it on film. While The Picture of Dorian Gray was shot almost entirely in black and white, the picture itself appears in ravishing Technicolor that emphasizes Dorian’s ghoulish stare and the painting’s eye-popping, almost psychedelic pigments. Though the film went on to win an Academy Award for black-and-white cinematography, there can be no doubt that its most inspired image is the luridly colorful one Albright dreamed up.
Albright went on to complete many celebrated paintings before his death in 1983, but he’s never quite become a household name. Even at the Art Institute of Chicago, where his Dorian Gray permanently hangs, he’s long been overshadowed by his contemporaries
Grant Wood
and
Edward Hopper
, whose American Gothic (1930) and Nighthawks (1942), respectively, enjoy the kind of recognizability that’s so far eluded Albright’s paintings. His vision of the world may have been a touch too macabre to be truly, resoundingly popular, and perhaps that’s nothing to be ashamed of. Oscar Wilde, that unabashed elitist, put it best: “The artist should never try to be popular. Rather the public should be more artistic.”
Jackson Arn
Related Stories